When Edwin Diaz needed something withfour doors to replace his heavily-modified RX-7 project, he turned to one of the most potent import performance sedans on the planet, the EVO X. “I needed a 4-door family car that was comfortable enough to take my daughter Bella anywhere without any reliability issues,” he remarked. Diaz decided the turbocharged 4B11T engine mated to Mitsubishi’s smooth-shifting Twin Clutch Sporttronic Shift Transmission (TC-SST) was the answer to his daily family-transportation question. Text by Arnold Eugenio // Photos by Richard Fong

After replacing the modified RX-7 with the 2008 EVO MR here, Diaz missed the admiration he previously received in his “fast-looking” car. In response, the initial round of modifications to the EVO X focused on aesthetic upgrades. “I built toward a JDM look. Not because I think it’s the best there is or because it’s ‘JDM’. I simply like the styling,” he explains. To that end, Diaz installed several Varis carbon-fiber aero pieces including a vented hood, front lip spoiler and rear diffuser. He added Chargespeed carbon fiber side skirts and a roof-fin vortex generator to round out the aero enhancements. 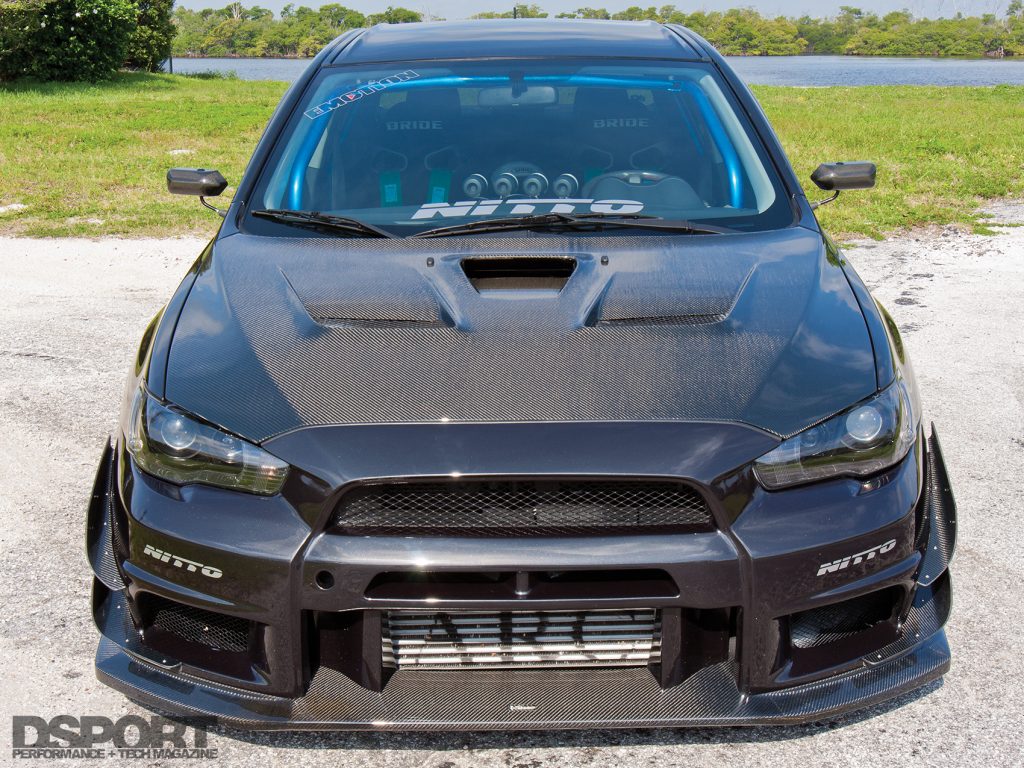 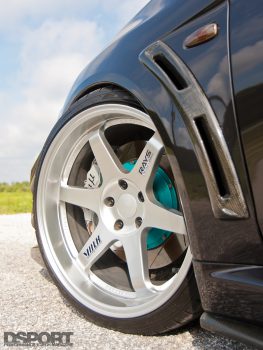 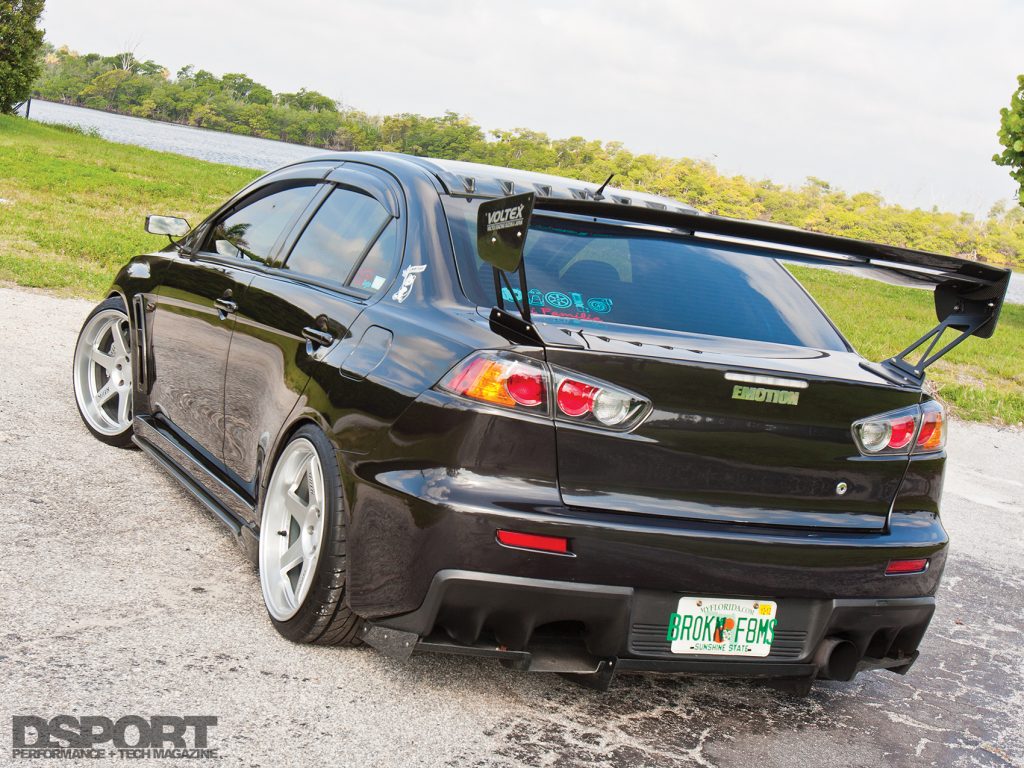 When it came to adding power, Diaz reminded himself of his original intention; grocery-getting and transporting his daughter. “The goal was to keep it simple and reliable,” Diaz states, “but, being a chronic car enthusiast, minor modifications started happening here and there. The car soon looked more track-inspired than street car.” While trying to follow the spirit of his original intention, Diaz reasoned that any engine performance upgrades would be in the name of improved efficiency and reliability, not extreme performance. 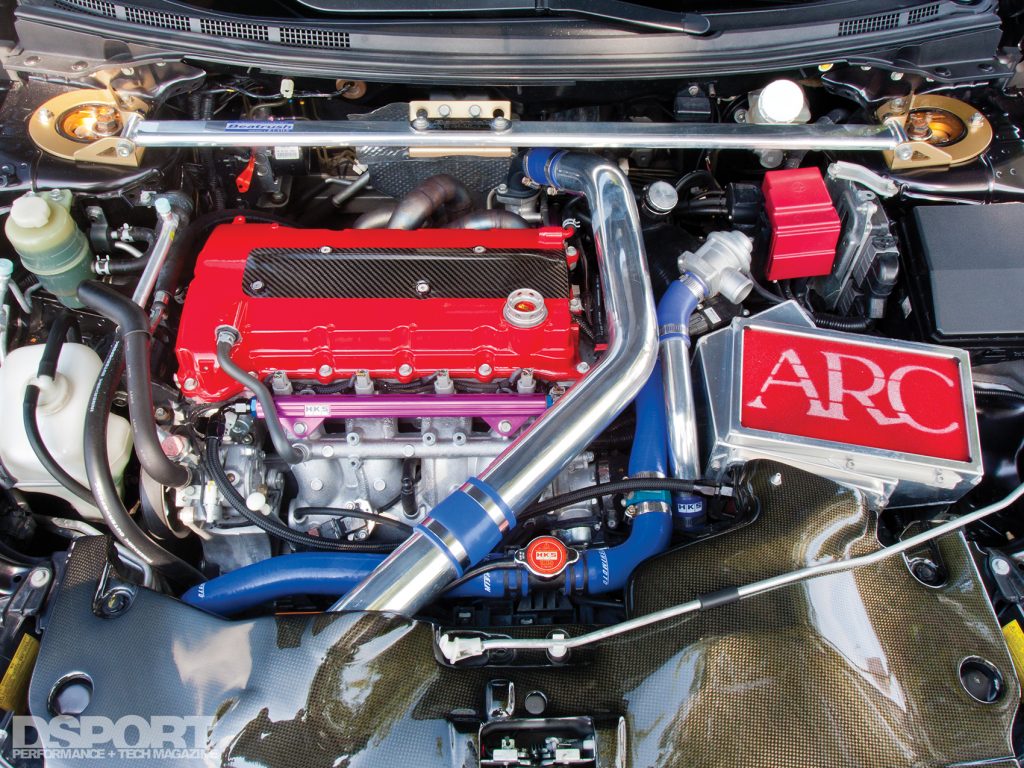 Factory head gaskets and head bolts are not designed for the prospect of enthusiasts doubling the factory horsepower output. When turbo engines are pushed hard, the factory head gasket may fail due to a lack of adequate clamping force. Looking to avoid this issue, Diaz opted to upgrade the factory head bolts to ARP head studs to increase the clamping force on the head gasket. Once the cylinder head was secured to the block, Diaz next upgraded the cams. Camshafts are the conductors of all valve events. The lift, duration, ramp profile and timing of the camshafts influence power output, fuel economy, emission and the width and location of the engine’s powerband. To increase the efficiency and expand the powerband of the 4B11T, Diaz replaced the factory cams with a set of Jun Auto 264-degree camshafts. Diaz installed high-rate valve springs and titanium retainers to properly control the return of the valves to the seats.

Since Diaz would drive the car on the street 99-percent of the time, he narrowed his turbocharger choices down to stock-replacement or “sport turbo” selections. These turbos would bolt in the factory location while supporting faster spooling characteristics and increased power at street-level RPM ranges. After some research, Diaz selected Forced Performance’s FP RED turbocharger. This turbo spools fast while producing more power than the stock turbo. A ball-bearing center section and twin- scroll configuration allow the FP RED to deliver the goods. 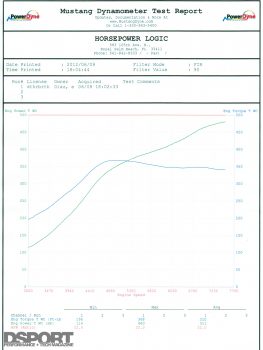 With a new turbo taking the lead, a new supporting cast was in order. A complete ARC-branded intake charge- air system consisting of front-mount intercooler, matching intercooler piping and aluminum airbox replaced the factory units. To meet the fuel requirements of the larger turbo, Diaz employed a host of HKS and SARD fuel components. With all the components in place, Diaz’ EVO registers 480 whp at its 7,600 RPM peak on a Mustang Dyno all-wheel-drive dynamometer on a diet of 93-octane pump gas. A stock EVO MR on the same dyno delivers 240 whp for comparison. To validate the goal of making a true street car, Diaz’ component selections and corresponding engine-management tuning allow the EVO to produce its peak 368 lb-ft of torque at a very usable 4,900 RPM. 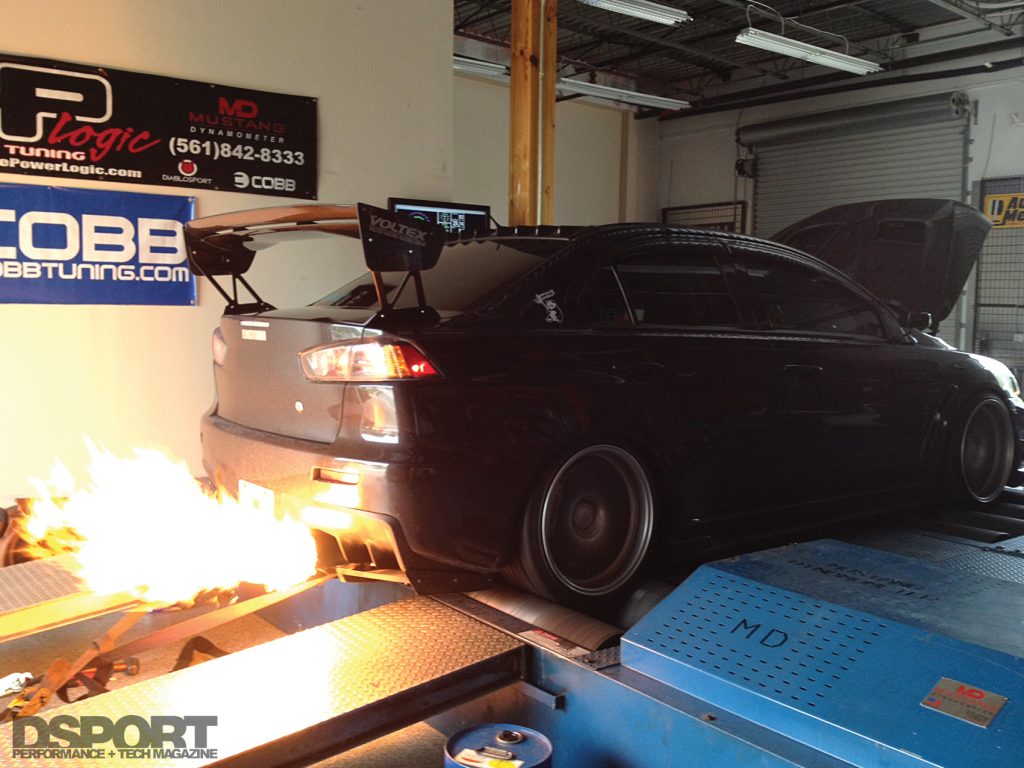 Diaz enjoyed his well-thought-out horsepower increases and chassis and suspension upgrades for some time without incident. Soon, the desire to push the power envelope manifested in a lead foot that ultimately led to the demise of the original twin-clutch Getrag box. Undeterred by the setback and boosted by the feeling of being close to completing his build, Diaz opted to reinforce the replacement transmission before installing it. Where AWD transmissions at this power level are concerned, the clutch packs are usually the main point of failure, as was the case in Diaz’ TC-SST. An aftermarket upgraded clutch pack kit and transmission cooler were incorporated in the rebuild. The transmission cooler extends the life of the wet clutches by keeping the transmission fluid temperature in the temperature range that delivers the best protection. 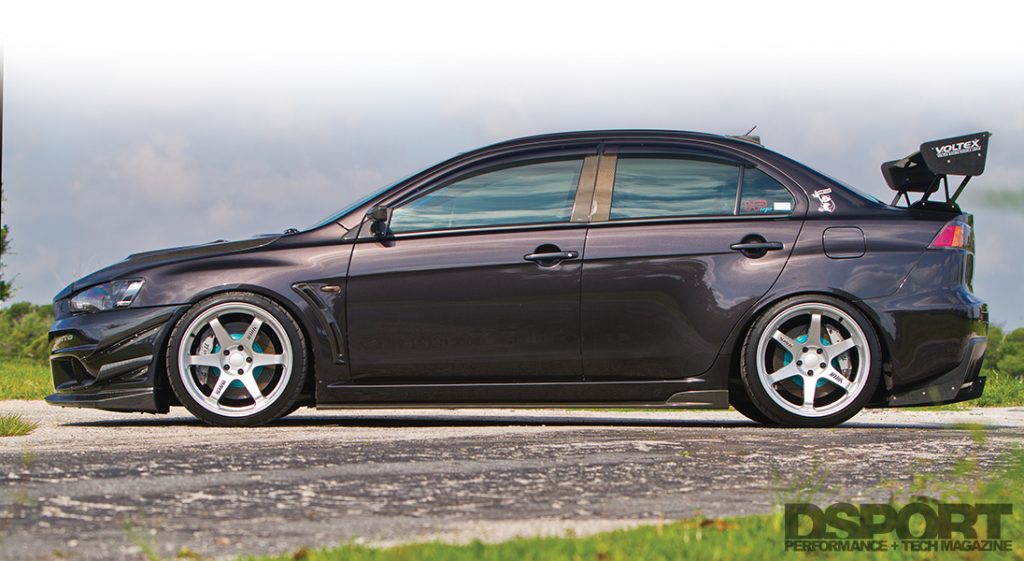 Diaz drives his EVO MR daily to commute and to transport his most precious cargo, his daughter Bella. “She has been my inspiration for everything I do. In fact, she is the one that convinced me to go with the Phantom Black and carbon-fiber components because she likes how the combination looks,” Diaz explains. While the incremental performance additions have slowed down, Diaz still works on the vehicle’s appearance. Of course, each modification requires Bella’s approval. One day, Diaz hopes to throw keys of this EVO to his daughter. Until then, Diaz plans to enjoy each day that this 480-horsepower monster takes him and Bella out on the town.