You can’t think JDM without the Supra popping in your head. The Japanese performance market introduced a great deal of legendary cars over the years, and the Toyota Supra is amongst the top of the list. The Supra quickly stole the show in its debut in 1979 with its 2.6-liter inline-6 engine; the first Toyota production motor with electronic fuel injection. In 1993, the Supra took a fast turn to compete with other supercars, like the R32 GT-R, when performance became Toyota’s main focus for their Supra, and the style we all know and love was born. We can talk all day about the Supra’s fascinating looks, but its true fame was created from its stock turbocharged 2JZ-GTE engine. The cast-iron block offered 320 horsepower out of the box, and the straight-six motor was a playfield with unmatched potentials for tuners. Today, Garage Revolver, in collaboration with Varis, does it again with this unique, one-of-a-kind Supra build. 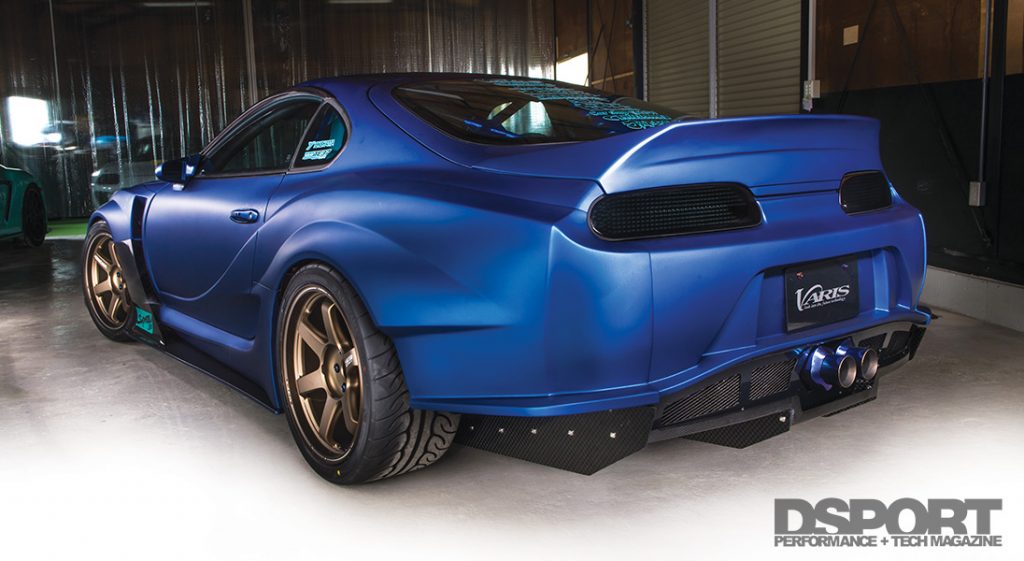 Located in Katsushika-ku, a municipality of Tokyo, Japan, Garage Revolver is a well-respected builder of high-end demo cars that is known for their collaborations in the street show-off scene. They are renowned for their unique one-of-a-kind builds that feature visually striking wraps in wild colors. Shunsuke Shimomura is the Chief Executive Officer of Garage Revolver and has been responsible for producing these stunning custom vehicles that show an impressive attention to detail and design skills like this ’95 Supra. The build came to life with the help of Varis. For JDM fans, Varis needs no introduction; however, if you’re not a fan, this company knows just how to change your mind. Started in the 1970s, Varis is a Japanese family-owned business whose craftsmen have been responsible for some of the most iconic aero bodies found on thousands of magazine covers. Naohiro Yahagi, the founder of the company, started fabricating unique wide-bodies for Japanese compact performance cars in the mid-1970s, well before it was popular anywhere in the world.

The 2005 Supra project came to fruition when the Varis team met Shunsuke-san of Garage Revolver at a Super Taikyu race, where both of their cars raced under the same sponsor. At the time, Shunsuke-san had built a custom mint-green R35 GT-R with suicide doors. The two shops discussed building the Supra at the 2017 Tokyo Auto Salon show, one year prior to its 2018 debut at the very same show. The plans went exactly the way the collaborative teams wanted them to go, and the Supra shined under the sparkling lights of the show in January of 2018. The build is a demonstration of how advanced the aftermarket Japanese performance industry has become, with creative body work and more-than-capable performance to back it up. 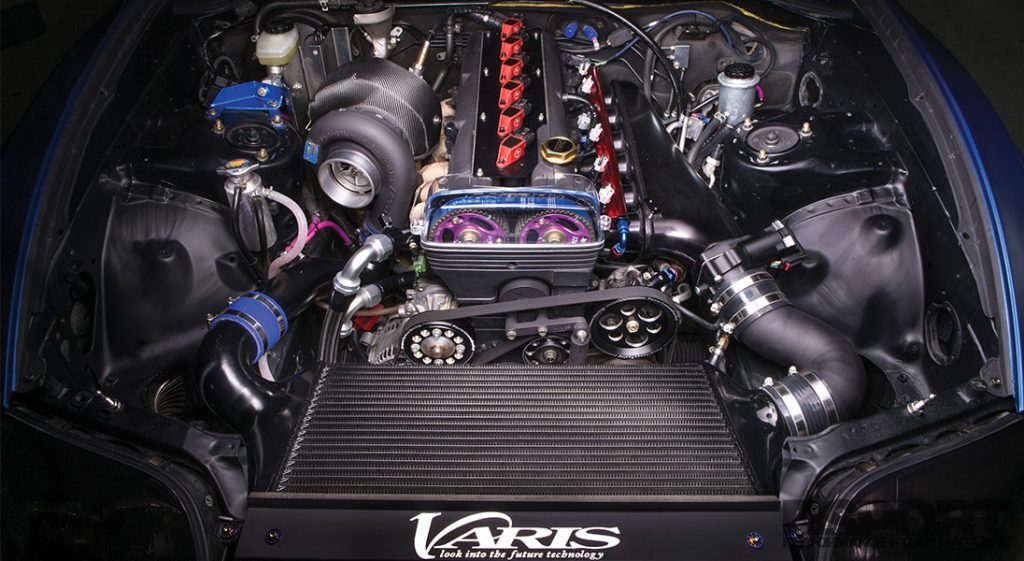 Show With Power To Go

Don’t let the sexy looks and expensive fabrications on this Supra fool you, it has some power. In the engine compartment, the 2JZ-GTE built by Do-Luck delivers 800 horsepower to the Toyota factory transmission. The seasoned block was bored and honed to a final size of 87mm, with a balanced and polished 86mm crankshaft, this brought the total displacement to 3.1 liters. A set of six forged pistons and rods were then installed into it. As an engine’s RPM increases, any imbalance is multiplied. With this in mind, the forged internals were balanced to within a fraction of an ounce to ensure a smooth running engine and to maximize the reliability and durability of the 2JZ. To optimize the flow to the combustion chamber, the heads were ported and polished after a precision three-angle valve job. Then a set of more aggressive intake and exhaust camshafts with 10.5mm of lift and 272-degrees of duration were installed to allow the valves to open higher for a longer period of time. 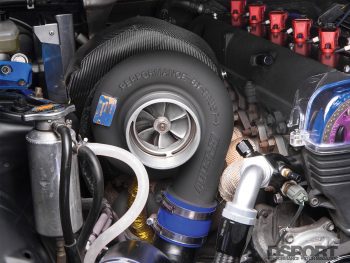 The build is filled with many other advanced modifications, like the one-off custom drive-by-wire throttle body made by Do-Luck. The throttle body receives input from the main control unit. It examines the input from the accelerator pedal, the engine, and other vehicle conditions to allow it to correct any errors and keep the air/fuel ratio at peak operating efficiency when power is demanded from the engine. To get to the 800 horsepower milestone, a GReddy Spec Mitsubishi T88H-38GK turbocharger forces air into the system. Set up for top-end power, the turbocharger features a 76mm compressor wheel and a large 94mm V-band inlet for full boost at a reasonable RPM all the way to redline. The exhaust gases exit through a one-off Amuse center exhaust that was designed specifically for this Supra. With the engine machined, modified, and ready to represent the companies properly, it was time to make the suspension, wheels, tires, and brakes more capable to handle the power increase that the engine delivers.

The intercooler is angled precisely at 45° to allow the air directed from the air-dam, fabricated by Varis, to go through the intercooler and out of the large hood-vents.

Although this Supra will probably never see the flags of a race track, it is important to make this build complete with all the right components. With the engine assembled, it was time to switch the attention to the suspension system. Keeping the car grounded is a set of Quantum monotube coilovers. The monotube allows for more road-response, as the high-pressure gas chamber is separated from the fluid chamber using a floating a piston and seal. This allows the heat to be released easier as the temperature rises, as well as creates precise damping force, because the piston valve is larger, offering a wider area of pressure. 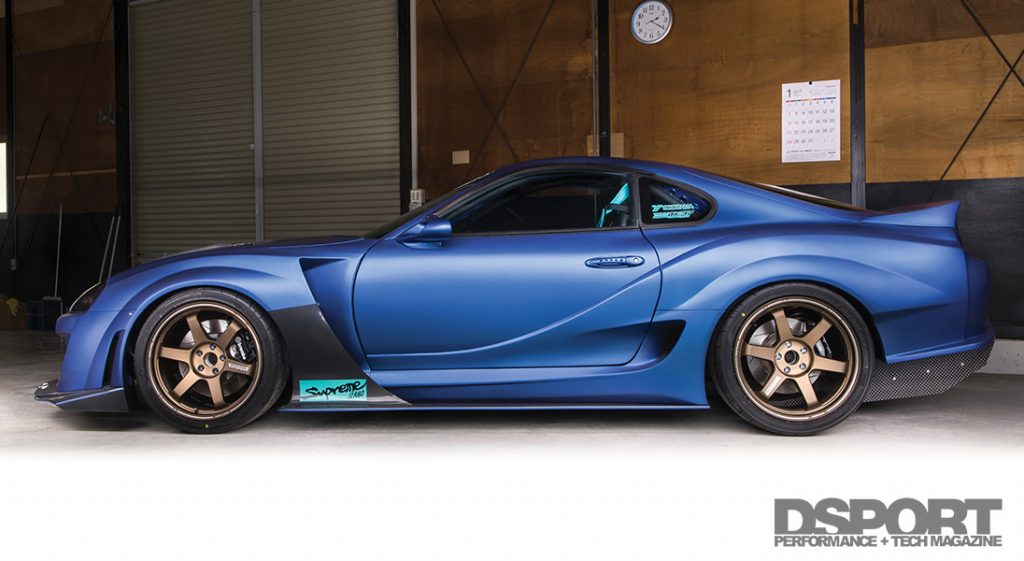 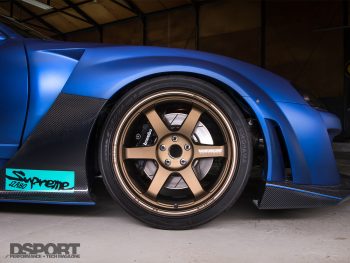 Making contact with the road is a set of Yokohama ADVAN Neova AD08 R 295/30R19 tires. The tires’ treads have twin circumferential center ribs and wide uni-block shoulders to increase handling around fast corners and enhance steering response. The tires wrap around a set of finely-chosen Volk Racing TE37 Ultra 19-inch wheels. Behind the wheels, the Supra gets its stopping power from a set of six piston Brembo brakes that clamp on to the slotted rotors. The slots in the brake rotors push the hot gases away from the brake pads and the rotors, and they blow away any debris and worn materials from the brake pads. To reduce expansion of the brake lines under heavy braking, the stock lines were replaced with high-strength stainless steel braided lines. The new lines improve the braking feel and allow for more controlled, consistent braking. This upgraded brake system comes in handy when navigating the race-track, and even the narrow streets and alleyways around the Garage Revolver shop.

With the car’s center of gravity lowered to enhance its handling, and the wheels, tires, and brakes replaced for both style and efficiency, it was time to start the real fun. 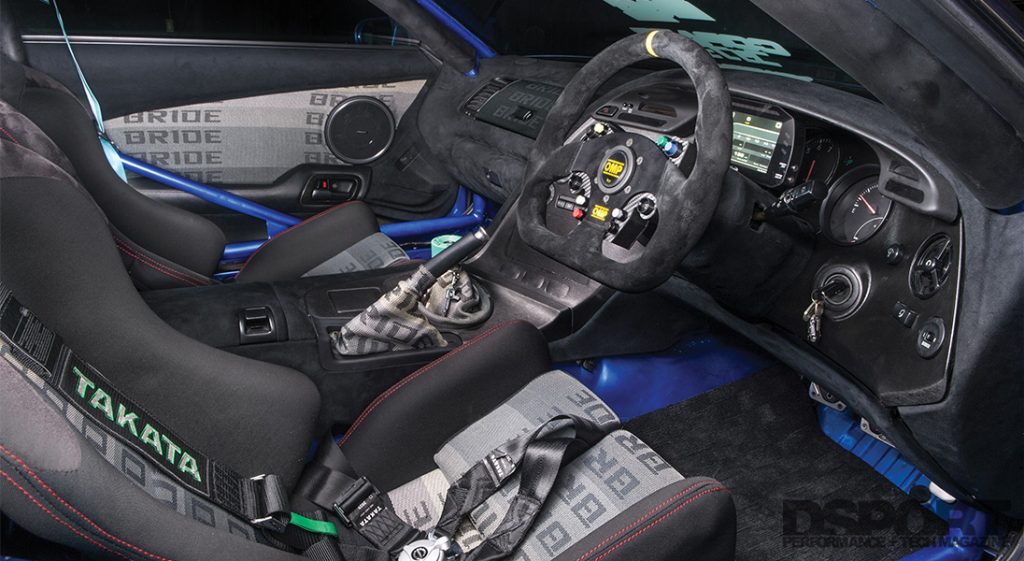 On the inside, you may feel as if you’re in a luxurious French palace. Everything around is covered in soft suede. Sitting in the Bride GIAS Alcantara seats could only be described as pure pleasure. The seats are constructed from all-aluminum frames, allowing them to offer enough protection without sacrificing weight. The cabin is surrounded by a custom roll-cage, and the driver and passenger are secured in place with Takata harnesses. The Supra is piloted using an OMP steering wheel that pays tribute to the racing spirit of the build, while a Koobator wireless switcher allows you to control up to 12 accessories around the car without any connected wires. A capable dashlogger is tremendously important in a high horsepower car, as it displays crucial engine data, like oil pressure, RPM and engine temperature. An AiM MXS dashlogger was the choice to display data for the driver.

On the outside, the Supra is a fine display of precision body work. The widebody is all courtesy of Varis, with a specially fabricated spoiler that adds a mixture of elegance and aggression. Every inch of the body shows an immense amount of attention-to-detail, from the door handles to the exhaust exit. The rear section of the car was cut, and new metal was welded to fit around the Amuse center exhaust. The wide fenders are as functional as they are aggressive, allowing air to go through the grille and out from the sides. The hood is all custom fabricated and the aggressive vents serve a more important purpose than just looks, as they assist in keeping the 800 horsepower engine cool. The body was wrapped in Avery Dennison matte blue metallic wrap, which creates a JDM masterpiece with the help of Car Shop Glow LED taillights.

Japan has been the home to some of the best compact performance tuners in the world. Companies like Varis, Do-Luck, PowerHouse Amuse, and Garage Revolver continue to represent the country well with an intense amount of details, creativity, and quality. Builds like this Supra coming out of Japan makes it is safe to say that the rest of the world have some catching-up to do.