Everyone needs a good getaway car. What you’re getting away from is up to you. For some, it’s the need to eliminate a vehicle’s shortcomings; for others, it’s to escape the fleet of also-rans in a saturated playing field. In still others, it’s simply an escape from the banality of showroom-stock cars. For Filippo Meli, however, it was a case of “all of the above” that prompted him to suit up and step up with his 2016 Subaru STI. 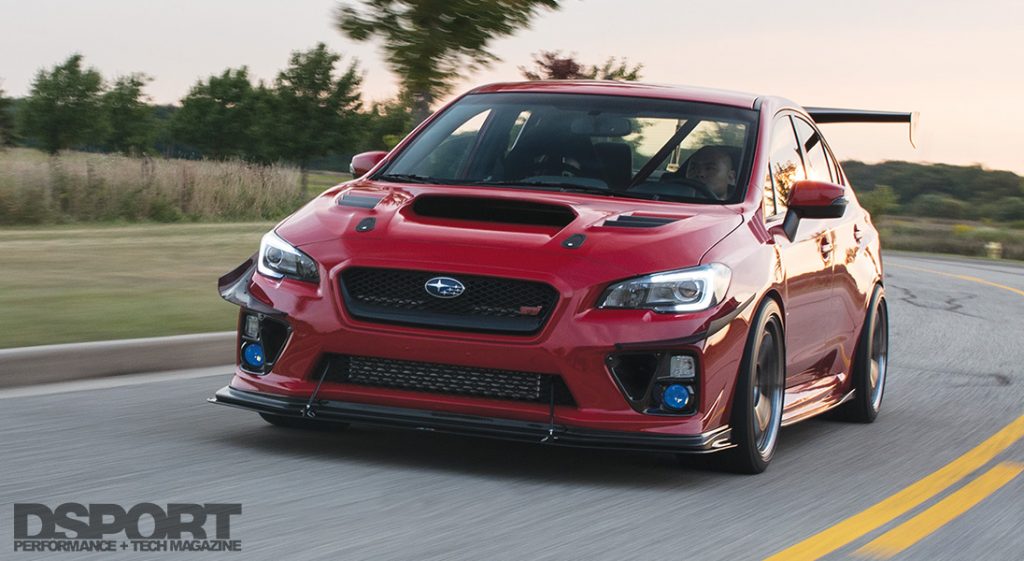 THE PLAN COMES TOGETHER

After joining the regional Subaru enthusiast group, the inevitable modification itch caught up to Meli. After months of research, and under the advice of primary builder Six Star Motorsports, fellow Chitown Subaru members, as well as TH Motorsports and Eric DeWitt, Meli ended up transferring his ideal build-plan from his existing 2011 STI onto a then-new 2016 STI model. Chosen for its differentiating body lines and stiffer chassis, the 2016 also provided a clean platform upon which to plan the escape from the mundane and into track and strip super-stardom. 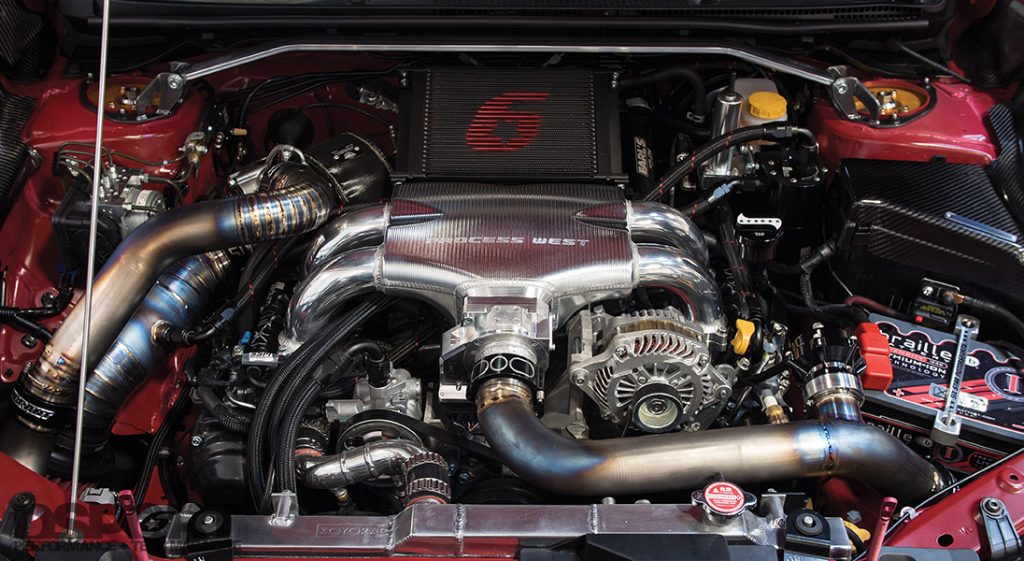 Clocking only 40 miles on the odometer, Six Star Motorsports ceremoniously disassembled the car and started the “replace and upgrade” process. The flat-four EJ257 was sent to Outfront Motorsports; their technicians installed a set of overbored CP Forged X Pistons of the 8.2:1 compression ratio, sealed with a set of CP Piston rings, and connected to the crankshaft via a quartet of Manley I-Beam connecting rods that are held together with ARP 625 connecting rod bolts. The factory crankshaft itself was retained after a polish-and-balance treatment. To ensure engine life and retention of tolerances, Outfront employed sets of King Bearings. 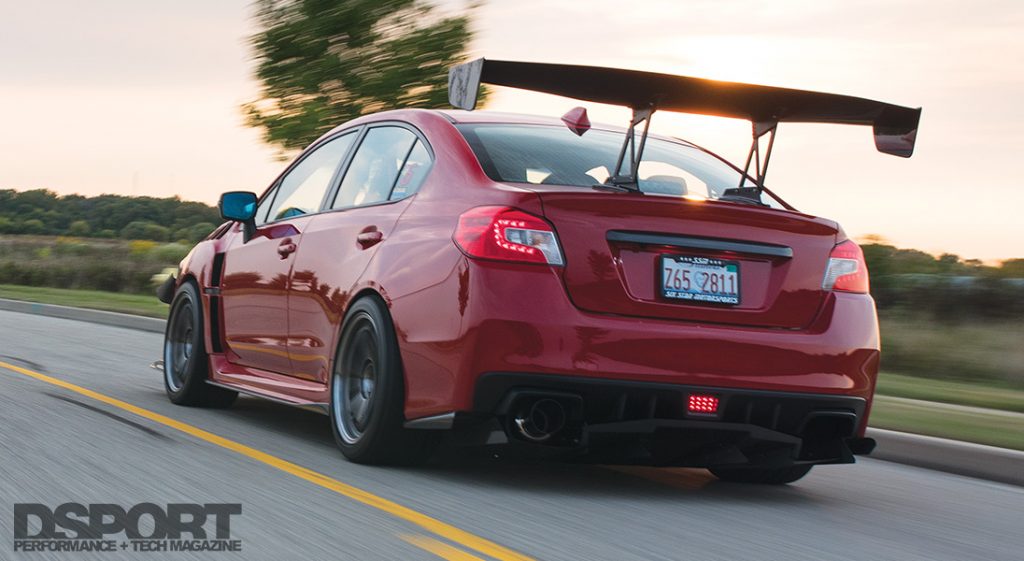 On the intake side, Six Star Motorsports fabricated a 4-inch titanium compressor housing inlet pipe shod with an AEM filter that feeds the Borg-Warner EFR 9180 turbocharger. The twin-scroll turbocharger pushes air through the ETS front-mount intercooler and past a Tial Q Black blowoff valve before the cooled charge-air ultimately reaches the Boomba Racing 75mm throttle body and fills the Process West intake manifold with up to 33 psi of positive boost pressure.

On the flip side, the Cerakote-coated, DEI-Titanium-wrapped Full Race twin-scroll exhaust manifold routes exhaust gasses post-turbine into the Full Race downpipe, which has also been treated to a Cerakote bath. A pair of Turbosmart 40mm CompGate wastegates assist in modulating boost pressure before spent gasses are finally expelled through a Tomei Expreme Titanium catback exhaust.

Achieving stoichiometric balance with the additional air provided starts in the factory fuel-cell with a Radium Engineering Fuel Pump Hanger holding twin Walbro 480 pumps, where only one pump feeds the system while the other stands-by on reserve. Because of that, supplemental fuel delivery under demand is provided by a pair of Holley Dominator dual brushless pumps and a Six Star Motorsports custom three-gallon fuel surge tank to stave off starvation. A set of Injector Dynamics 2,000 cc/min injectors ultimately deliver the Ignite 114 fuel into the combustion chambers.

To orchestrate the air/fuel delivery, Meli enlisted the tuning services of Graham Gaylord of Boosted Performance Tuning. Gaylord utilized a COBB AccessPort v3 to fine-tune the combustion process output with a GrimmSpeed 3-port electronic boost control solenoid that regulates overall boost pressures. In-car monitoring of these parameters is handled by the AEM CD-7L Digital Racing Dash Display. On the dyno, the power-producing combination turns the drum to the beat of 800.43 whp at 7,600 RPM, with torque output from the modified EJ257 checking in at 630.22lb-ft.

Subaru’s all-wheel-drive system can handle some abuse from the factory, but it requires ancillary help to be used to maximum potential. An Exedy Triple-Disc Clutch replaces the factory unit for substantially increased holding power with reasonably-streetable modulation and driving qualities. A Cusco stainless mesh clutch line ensures even pressure application after numerous pedal actuations, while an upgraded chromoly transfer gear from IAG Performance keeps the factory transmission from deteriorating through hard shifts. 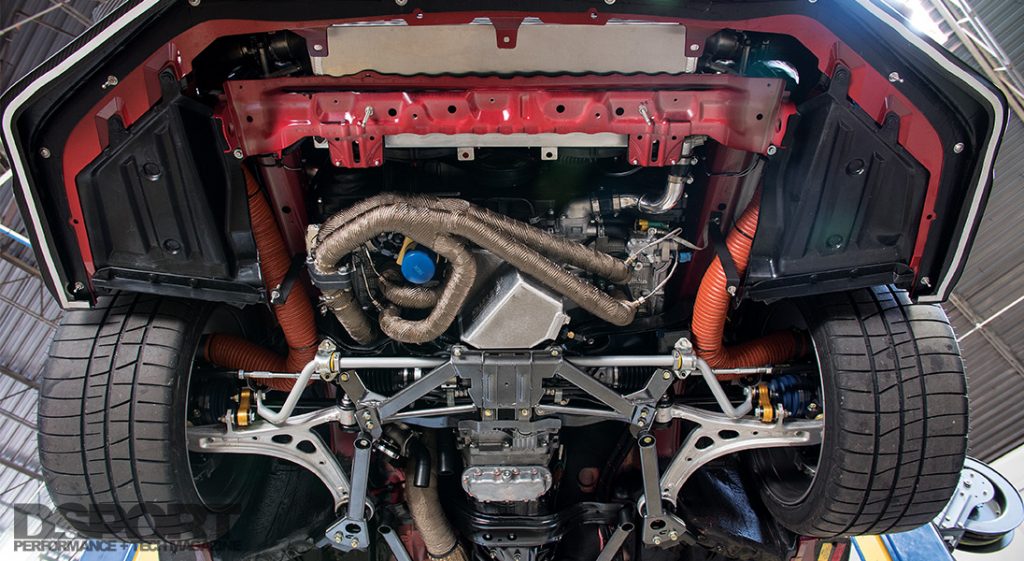 The all-purpose nature of the build dictated careful selection of suspension components to help keep the power down on the ground and on the proper race line, while maintaining Meli’s desired level of comfortability on the street. To that end, the chassis is supported by a set of Ohlins Road & Track. Whiteline sway bars for the front and the rear, combined with Whiteline endlinks and a Whiteline Front Roll Center Adjustment kit, keep the suspension geometry predictable and within spec. Voodoo 13 rear adjustable control arms also aid the suspension-geometry correction, while a slew of Cusco chassis braces and ties ensure the “fifth-spring” quality of the chassis is minimized. 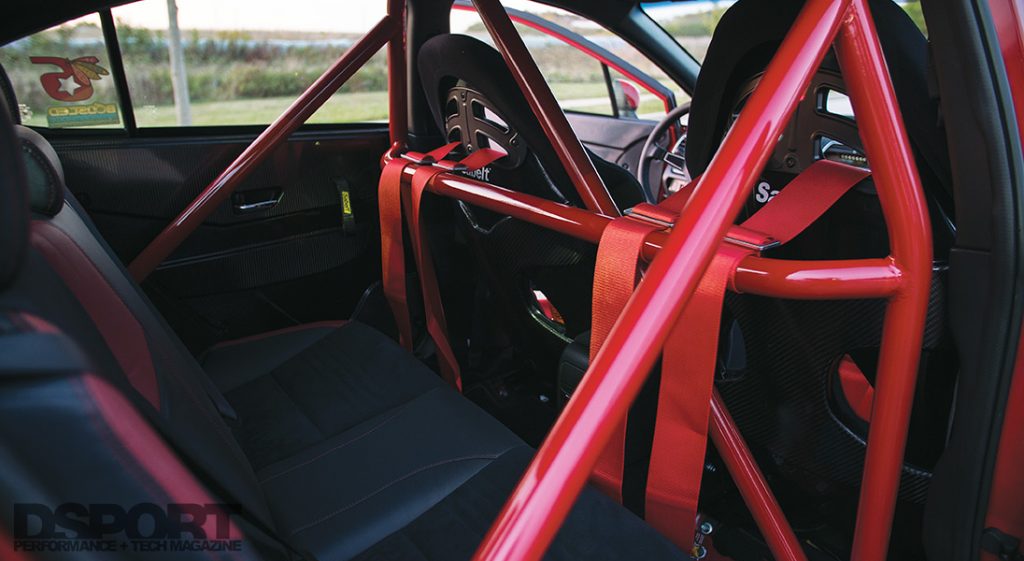 The interior sports a “business casual” look that’s at home on the street or on the track. The weld-in Autopower roll cage provides an additional level of safety for the occupants of the 800hp beast. 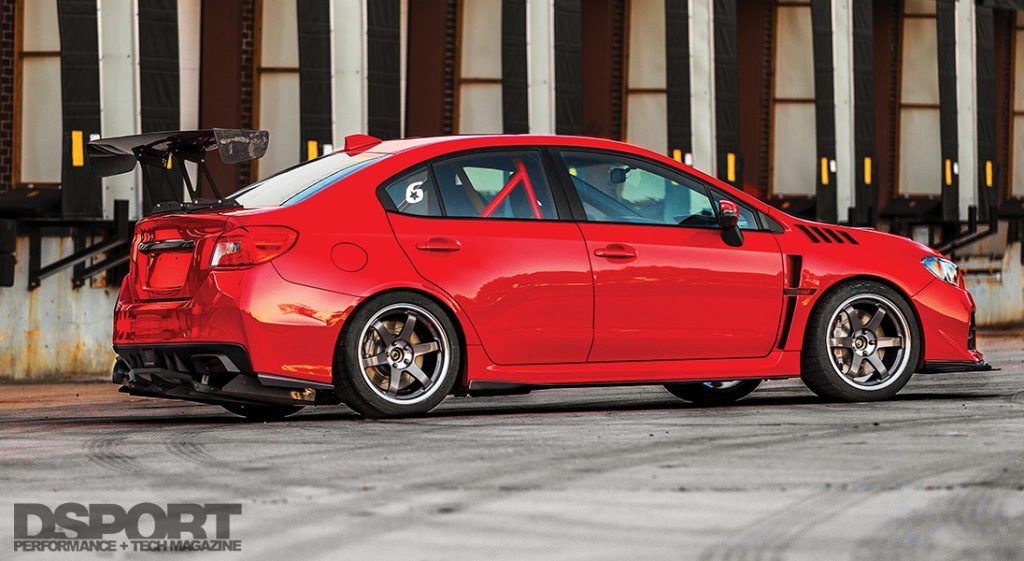 Even after a long and arduous build-process, Meli still managed to miss the target performance exhibition for the vehicle; however, he insisted on ensuring 100-percent completeness on the build before firing up the vehicle for the first time. “It wasn’t the best situation,” Meli explains, “but I certainly needed to be sure the car was properly ready and not rush the process of the build.” With the 2018 racing season just around the corner and his 800-horsepower monster in the stable, Meli is ready to escape the dullness of stock at a moment’s notice.