It is 3:00AM. There is no one in sight and the roads are completely empty. Far in the distance there is a faint flicker of white light coming towards you. It is hard to make out what the light is, but the sound waves from an angry exhaust system pierce the night’s sky. 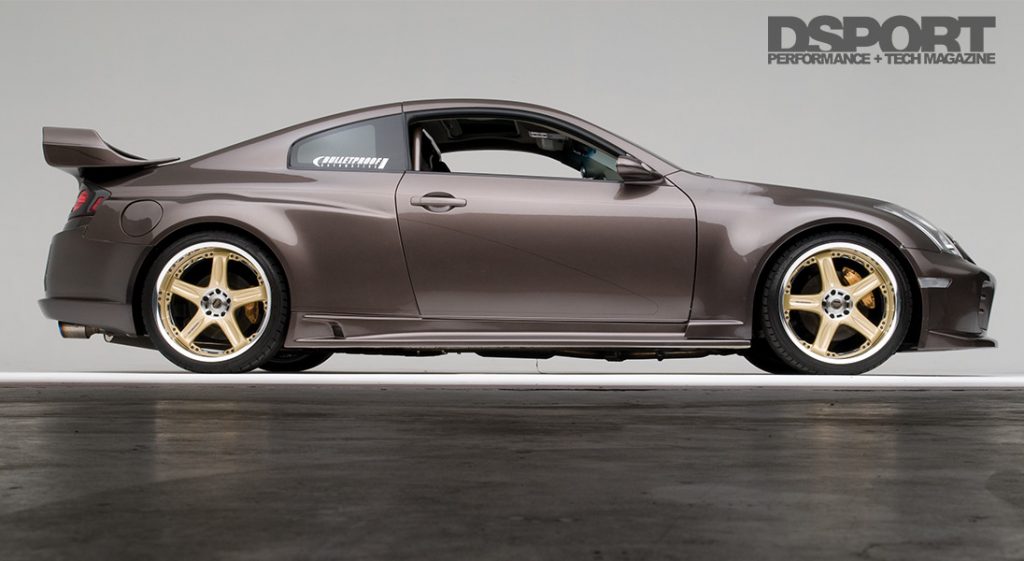 The gold car blows by and the sound waves push you back and within a few moments the car is already too small to see in the far off distance. Piloting any car at over 200 MPH takes guts, but doing it in the middle of the night on a public highway is flat out insane. Kazuhiko “Smokey” Nagata of Top Secret Japan has built a reputation of building incredible vehicles and taking them for high-speed test drives in different countries around the world. Smokey’s creations have inspired thousands of car enthusiasts throughout the world and many have aspired to build a Top Secret vehicle of their own.

Jason Sumibcay is one of those so-called followers of the Top Secret legacy. When Jason first laid his eyes on the white wide-body Skyline (G35 in the States) in the Top Secret booth at 2005 Tokyo Auto Salon he knew he had to have one. The sleek lines and promise of big power were too much to resist for Jason. Unfortunately, to purchase one of Smokey Nagata’s actual demo cars would be beyond Jason’s budget. So he did the next best thing by building his own Top Secret Skyline. 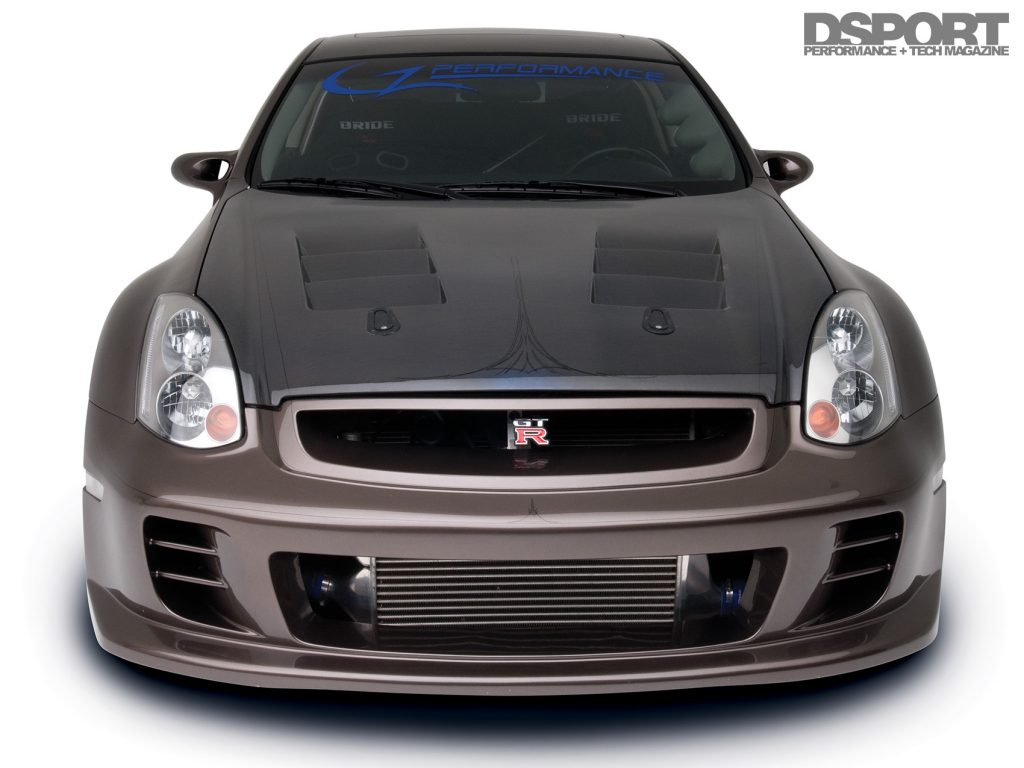 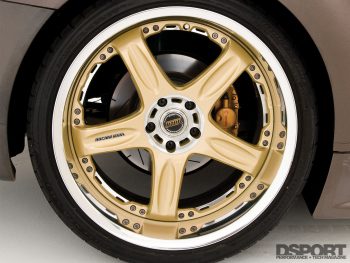 The essence of all Top Secret cars revolves around the body kit. Jason ordered the Top Secret Super G Force wide-body aero kit from Bullet Proof Automotive. The hood is a Top Secret carbon piece with Top Secret flushmounted hood pins. Another carbon piece is the Veilside wing, which holds its own against the aggressive Super G-Force kit. To stay consistent with his theme Jason also selected the Top Secret Carbon taillight covers and Top Secret Aero mirrors. Making sure the body kit received the kind of attention it deserved, Jason sent the G35 to his cousin’s body shop in Maui, Hawaii. Jon Pagaduan and Ryan Rabanez of JP Customs meticulously installed all the body parts before spraying the car in a DuPont Berryilium 16 hue topped off with a Blue Ice Pearl.

A set of 20-inch Volk GT-C wheels measuring 10.5-inches wide fill the fenders at all corners. Bridgestone Potenza S01 Pole Positions are staggered 255/35R20 in front and 285/30R20 out back. Behind the spokes are Brembo calipers and Hawk pads clamping down on a set of DBA slotted rotors. Pressure to the pads is provided by stainless-steel brake lines packing synthetic DOT-4 brake fluid. 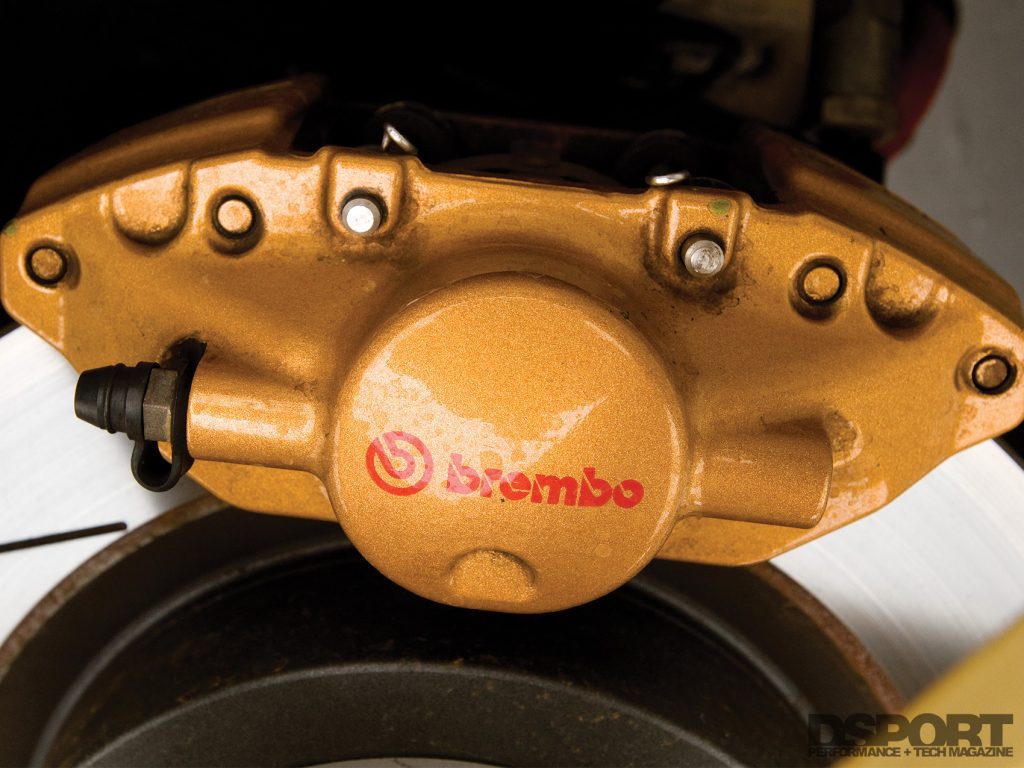 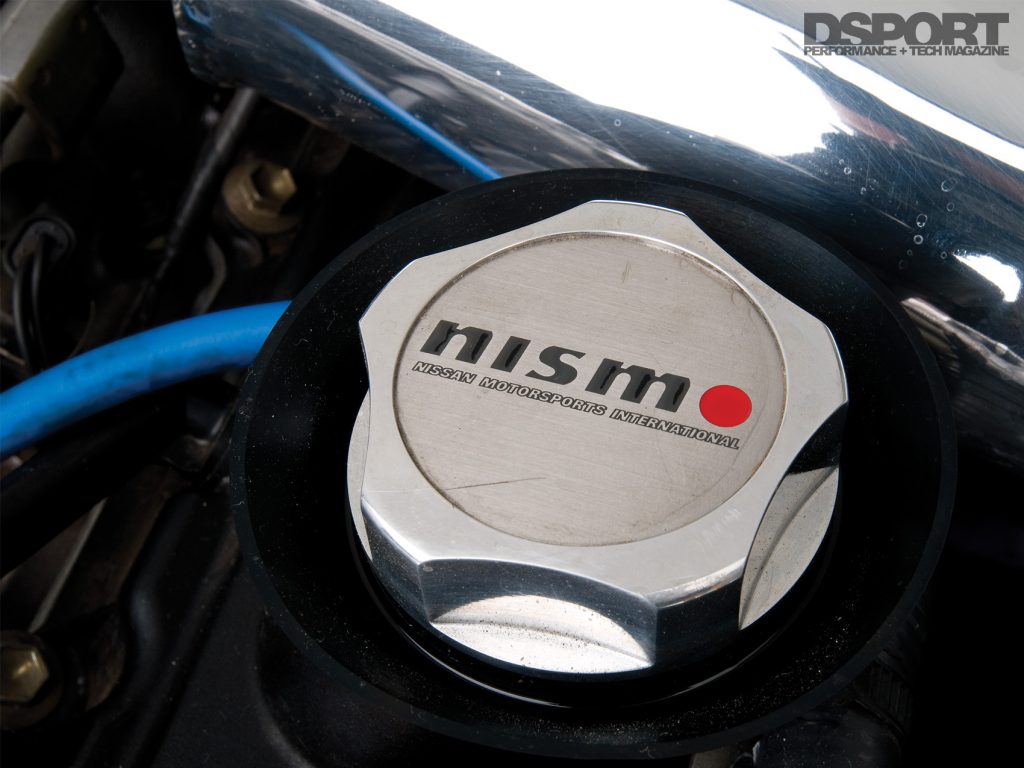 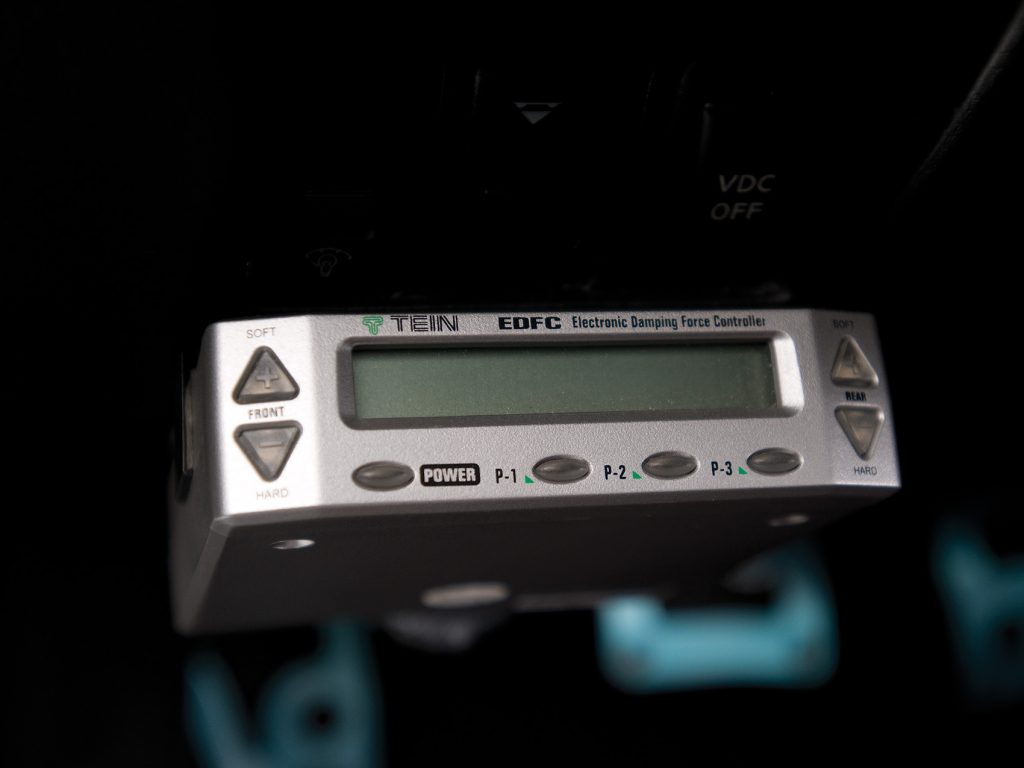 Not wanting to leave any stone unturned, Jason looked to improve the contact patch to the tarmac by concentrating on the G35 suspension. Lowering the Infiniti’s center of gravity is a set of Tein FLEX dampers. The FLEX damper kit allows up to 16-way adjustability. With the Tein EDFC mounted within arm’s reach, Jason can fine-tune the shocks at the touch of a button. Helping plant the front wheels squarely on the pavement is a pair of Cusco front A-arms that allows for camber alignment. Stillen rear toe and camber links further increase traction to the rear wheels. A set of Stillen front and rear sway bars help alleviate body roll under hard cornering. 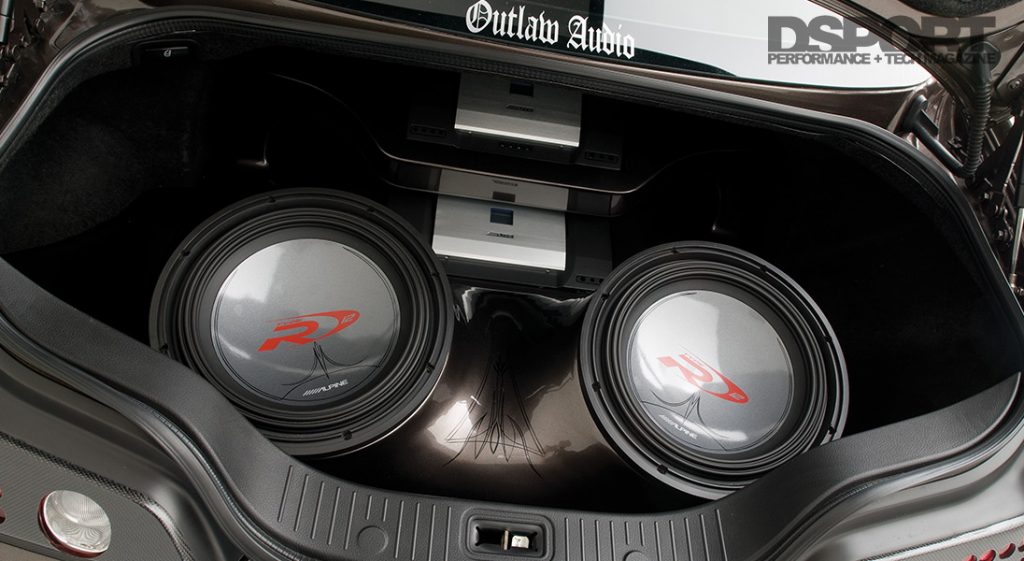 Keeping an air of mystery about the of Jason’s more recent additions to the vehicle was the slammin’ trunk audio build-up by George Reyes’ Outlaw Audio. Outlaw Audio built a tricked out trunk enclosure to house the two 12-inch Alpine Type R subwoofers and the two Alpine amps. 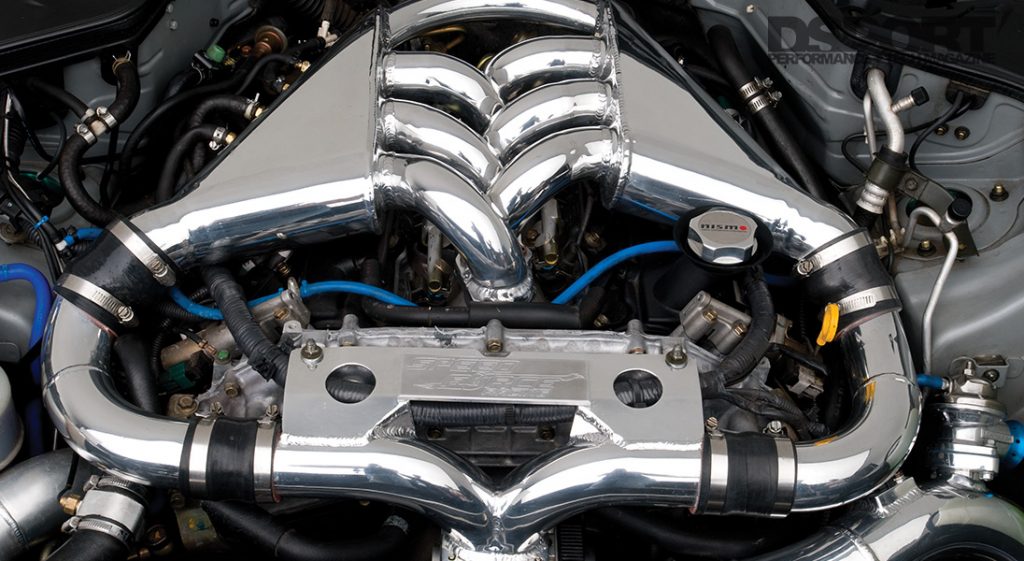 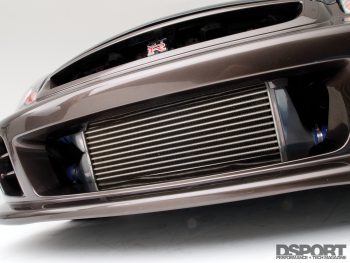 With the cosmetic modifications completed and finished, Jason was ready for the power phase. Jason sent the engine to Mike Knopp at GZ Performance in San Diego. A solid foundation is crucial to any engine build, especially when an engine will be pushing over 500 horses at the rear wheels. The block was bored and honed to accept a half-dozen 8.5:1 compression Arias pistons. The pistons swing on a set of H-beam Eagle connecting rods that are secured to the factory crankshaft by ARP rod bolts. The VQ35 heads and camshafts were left stock but new head gaskets and ARP head studs were used to seal the heads to the block. With the engine’s foundation set, the focus shifted to the forced induction system. Jason chose the twin-turbo system from Jim Wolf Technology. The centerpiece of the turbo kit is a pair of Garrett GT28RS ball-bearing turbochargers capable of producing up to 700 flywheel horsepower. The turbos are regulated to a conservative 12 psi of pressure by a GReddy PRofec e-01 boost controller. Spent gases from the turbochargers are expelled through an HKS HI-Power Ti exhaust system. Compressed charge air from the turbos is routed to the GReddy front-mount intercooler via custom aluminum I/C piping. By forcing the hot charge air through the cool fins of the front mount intercooler, heat is removed through convection and radiation. The cooler charge air helps reduce the chance of detonation and increases horsepower potential. Once properly chilled, the denser charge air is force-fed into a custom Speed Force Racing intake manifold. The intake manifold incorporate two plenums and a balance tube. The factory drive-by-wire throttle body is responsible for controlling airflow into the intake plenums. The plenums then channel the charge air into each bank of the V6 engine. Once there, high-octane fuel is atomized into the air stream by a set of RC Engineering 440 cc/min injectors. A Walbro 255-lph in-tank fuel pump sends the fuel to the dual rails via the factory lines and regulator. A GReddy e-Manage engine management system teams with the factory ECU to aid in the tuning of the VQ35 engine. The factory ECU was used to control the drive-by-wire throttle body and factory gauge cluster while the GReddy e-Manage unit handles all fuel and ignition duties. With the help of a local tuner, Jensen Oda,  Jason was able to coax the twin-turbo VQ35 engine to the tune of 424.7 horsepower and 360.2 lb-ft of torque to the wheels on a Dynojet chassis dyno. 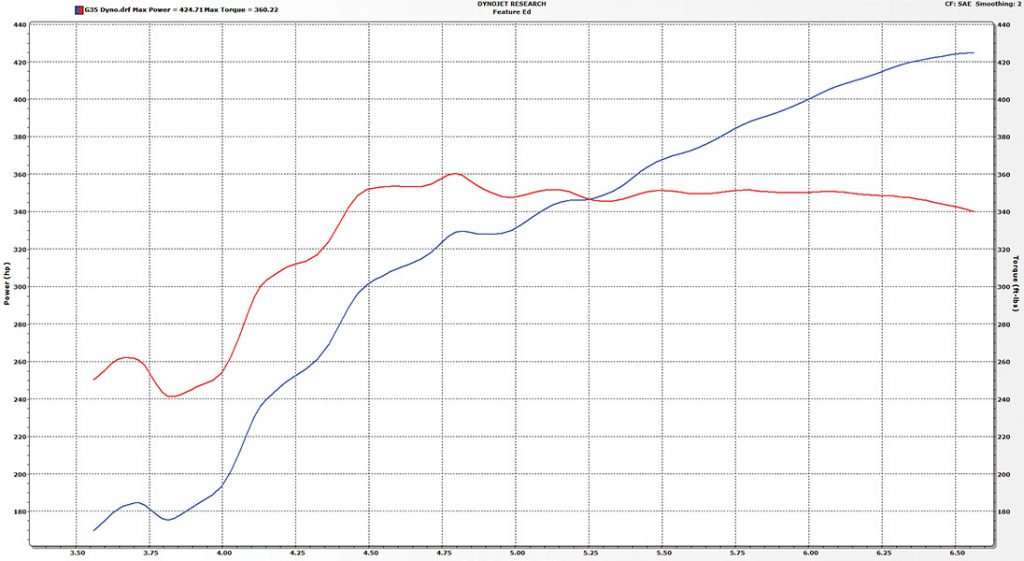 From 4,400 RPM until the 6,600 rpm redline, this boosted VQ delivers over 340 lb-ft of torque to the rear wheels. That results in a torque curve that throws you back in the seat and keeps you there.

Traveling at more than 200 MPH takes more than just horsepower. The suspension, wheels, tires and even the aero kit must work together to accomplish such a feat. Every component on the G35 has been reworked to handle these speed demands. Jason spent three years of his life building this “Top Secret” creation. Building a Top Secret monster takes more than just money. It takes imagination, dedication and a lot of blood, sweat, tears and a very understanding girlfriend. Jason states, without the help from his girlfriend Caroline, the car would have never come together. We asked Jason if he would build another Top Secret car. Without hesitation, he said yes. The next time you are in Maui, don’t be surprised if a wicked wide-body flies past you doing a topspeed run.