After waiting over 16 years, there is finally a generation of Honda Civic that may become more popular to performance enthusiasts than the 4th, 5th and 6th generation Civics that led the import performance movement in the States. For the first time ever, this 10th generation of Civic will feature not only the Si variant, but also a Type R edition available in the US. While the Civic Type R (CTR) has existed since 1997 in other parts of the world, the only Type R to hit our shores in the past was the DC2 Integra Type R (ITR). This platform was so desirable that locating one that wasn’t stolen at least once over the past 20 years is next to impossible. 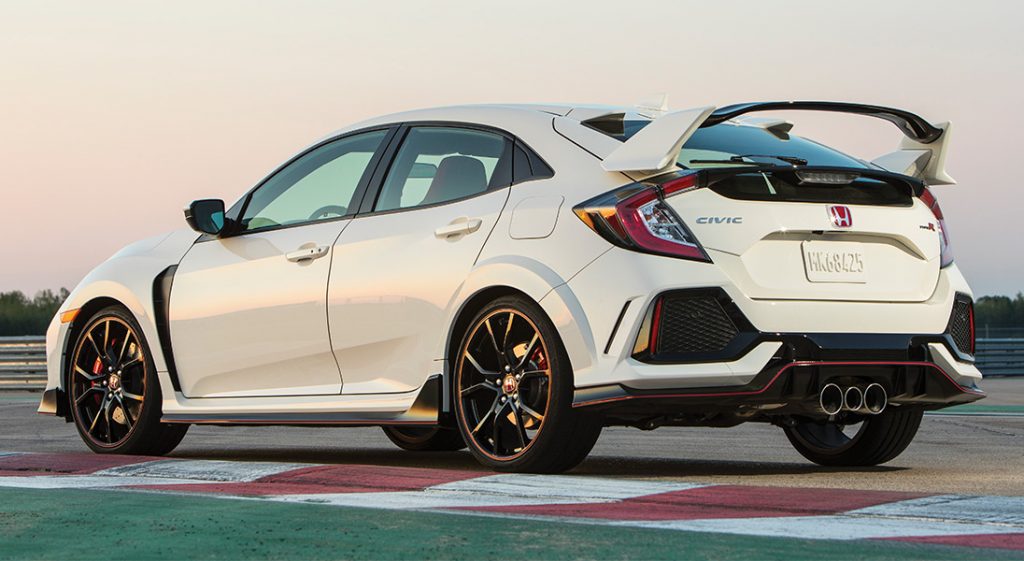 So is the new 2017 Civic Type R worth stealing? If your moral compass points to breaking one of the 10 commandments, perhaps. However, high demand from Honda fanboys and a somewhat limited supply and distribution will mean that dealers will be committing most of the robbery with inflated pricing over the $33,900 MSRP. Since all Civic Type Rs will be arriving to the US through East Coast ports (the vehicles are built in the UK), those desiring this vehicle on the West Coast are most likely to be affected. 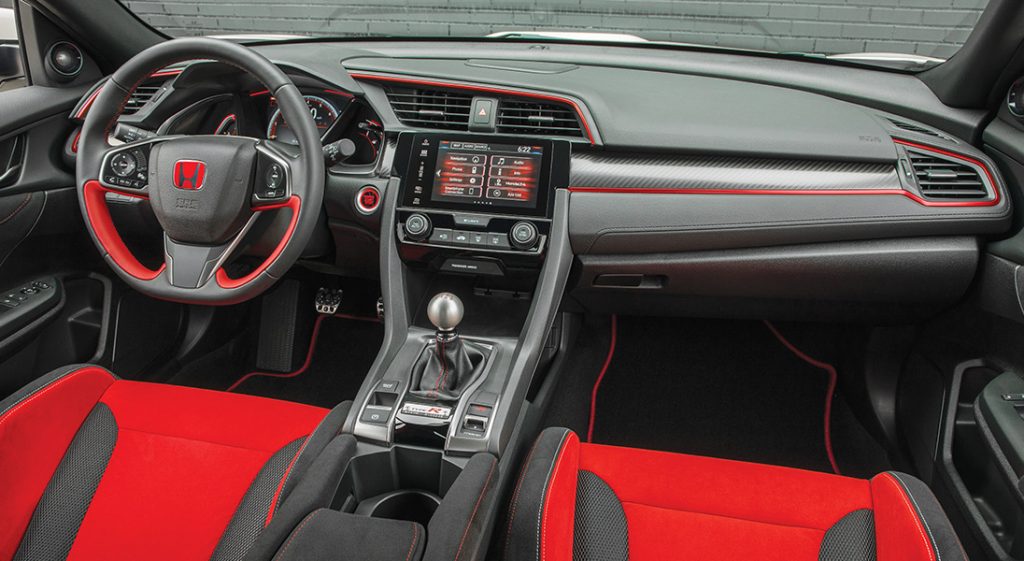 If you have ever had the experience of purchasing an Apple laptop computer, you’ve been the victim of precision pricing. This occurs when your original plan is to buy that $999 MacBook Air. Then you decide that $200 additional dollars is worth twice the storage space for the $1,199 version. But wait, the MacBook Pro starts at just $1,299 and it has a faster processor, so you start looking at those. Each and every price increase for bigger screen, more RAM and as you walk up the chain of MacBook Pros is justified. In the end, you purchase a top of the line, fully-loaded MacBookPro for $2,900.

The same genius that sets Apple’s product pricing is apparently the freelancer for Honda in setting the price of the Civic lineup. From the Civic EX-T to the Civic Si to the top-of-the-line Civic Type R, the price is right for what you get. If you like the base Civic EX-T (not really the base of the lineup, but the base for any performance enthusiast), you’ll love the Civic Si and you may kill, or at least steal, for the Civic Type R. 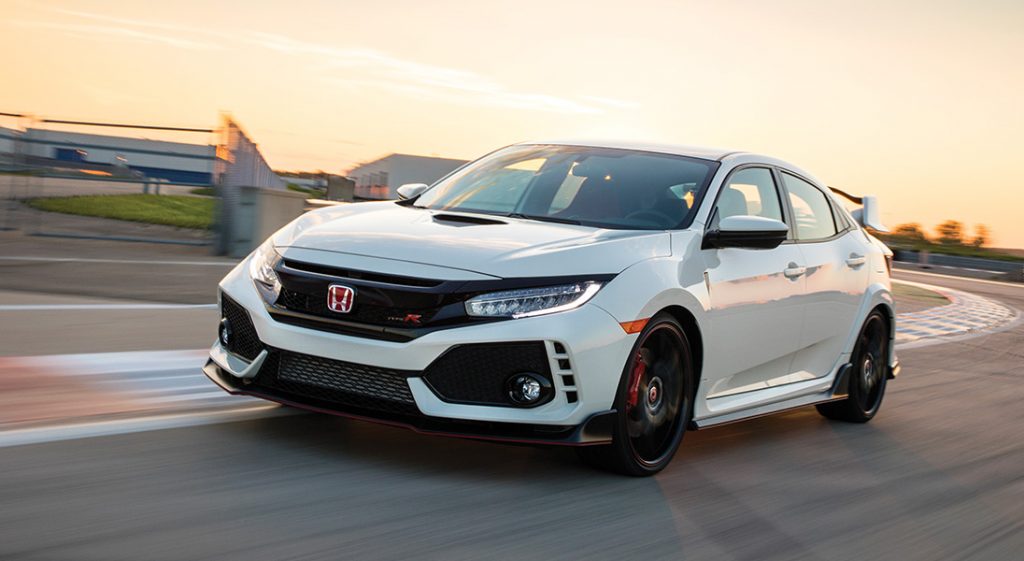 The $2,300 price difference between the Sport EX-T Coupe and the Si Coupe seems a no brainer. The Si edition offers 25 additional horsepower, a helical-type LSD, adaptive dampers, larger sway bars, bigger brakes and a larger wheel and tire package. That’s a lot of upgrade for 10 percent step up in price. However, the step in price between the Si and the Type R is more of a leap at $10,000. If you want to own the best version of the 10th generation Civic, it’s worth every penny too.

The improvements between the Civic Si and Type R are vast. These include engine, transmission, wheels, tires, sway bars, suspension, body, aero, exhaust, headlights and electronics. Like trying to turn a WRX into an STi, trying to accomplish these upgrades on a Si would easily run in the $15-to-$20K range. 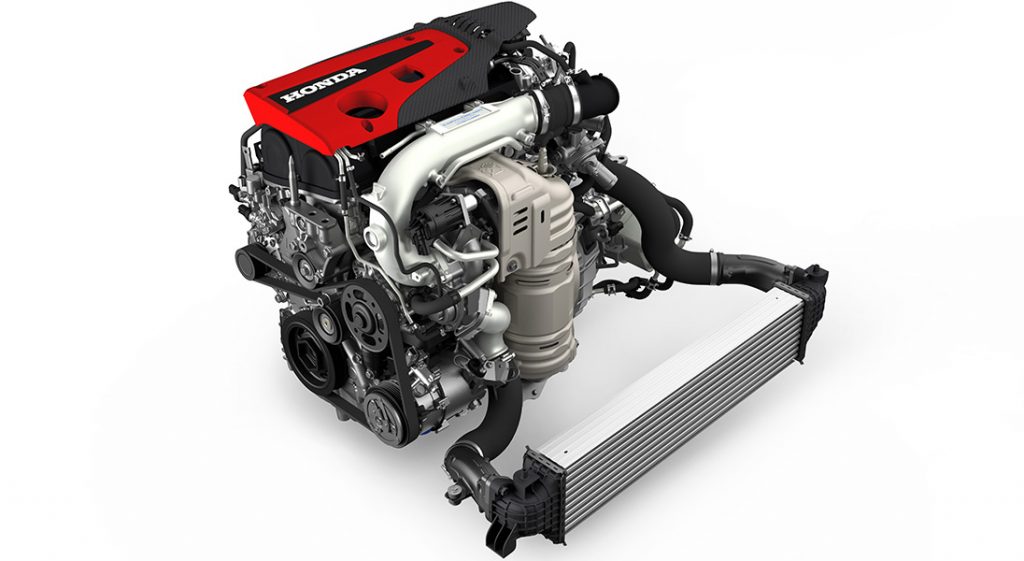 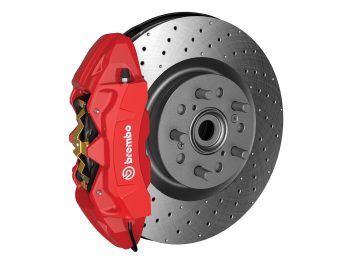 The Type R’s K20 engine delivers over 50-percent more power and torque than the Si‘s L15 thanks to more displacement, a bigger turbocharger (TD04 instead of TD03) and VTEC. An upgraded lightweight single-mass flywheel and revised gearing optimize the performance from the K20, while the Type R’s Rev-Match control allows drivers to get a heel-toe advantage without learning the skill. With more power and optimized gearing comes better brakes. While track testing the Civic Type R, the Brembo 4-piston calipers and 350mm cross-drilled rotors were almost too good. On the sticky Continental tires, you could go so deep before braking that the biggest mistake made on the track was braking too early. As for grip, the 245 tires on the 20-inch rims were well controlled by the adaptive damper system. Upgraded front and rear sway bars keep the Type R from excessively rolling in the turns while the dual-axis MacPherson strut front suspension eliminates torque steer.

The Civic Type R offers three modes for driving: comfort, Sport and Type R. The comfort mode doesn’t negate the sporty feel of the vehicle, but, in a good way, it simply numbs the pain a bit. This is a mode we’d use on longer trips, but if we wanted to have fun, the Type R mode would be in effect. In this mode, throttle and steering is crisp while the suspension really goes to work. 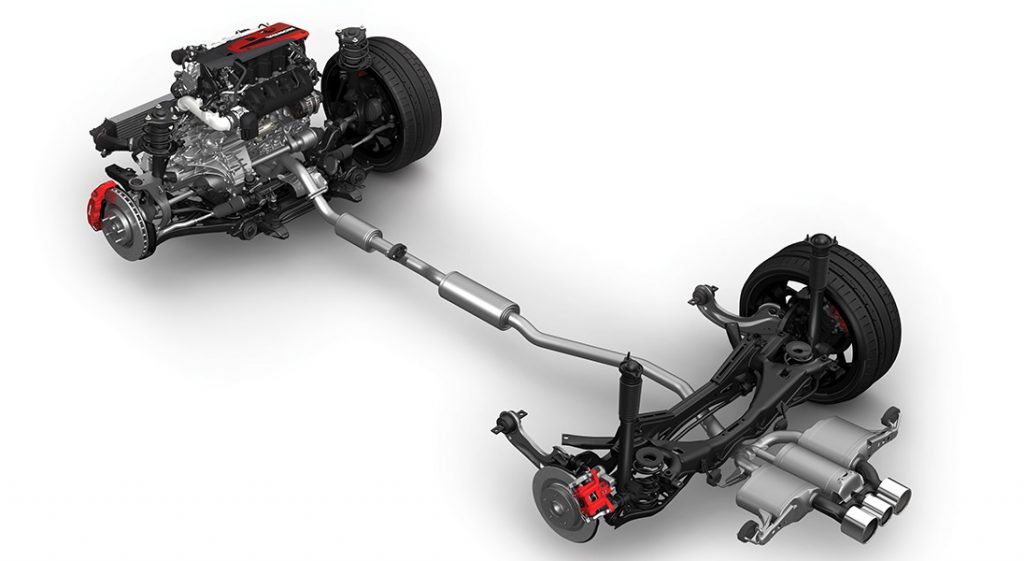 Despite spending over two decades in the performance aftermarket, I had never attended an F1 race before. When Honda offered the opportunity to fly to Montreal, drive the new Civic Type R and attend an F1 race, I couldn’t say “No.” So how was it? Montreal is awesome, even if they speak French just to piss off the rest of Canada. The Civic Type-R was the best FWD hatch I’ve ever driven and the F1 race was an experience. Never before have I seen so many Ferraris, Lambos, McLarens, Mercedes Benz and Porsches in one city at one time. The crowd is definitely wine and cheese, instead of beer and hotdogs. As for the racing, the technology and capabilities of the vehicles is amazing. The ability of these cars to accelerate, brake and corner is literally second to none and cannot be appreciated on television. As for the racing itself, it’s not as exciting as you might hope. Whereas it’s anyone’s guess who’ll win an IndyCar race, the qualifying ladder in an F1 race is too similar to the finishing order. Unless a car breaks, crashes, receives a penalty or has an issue on a pit stop, it’s very likely to finish in the order that it qualified. Still, seeing these cars in person is a definite bucket list item. 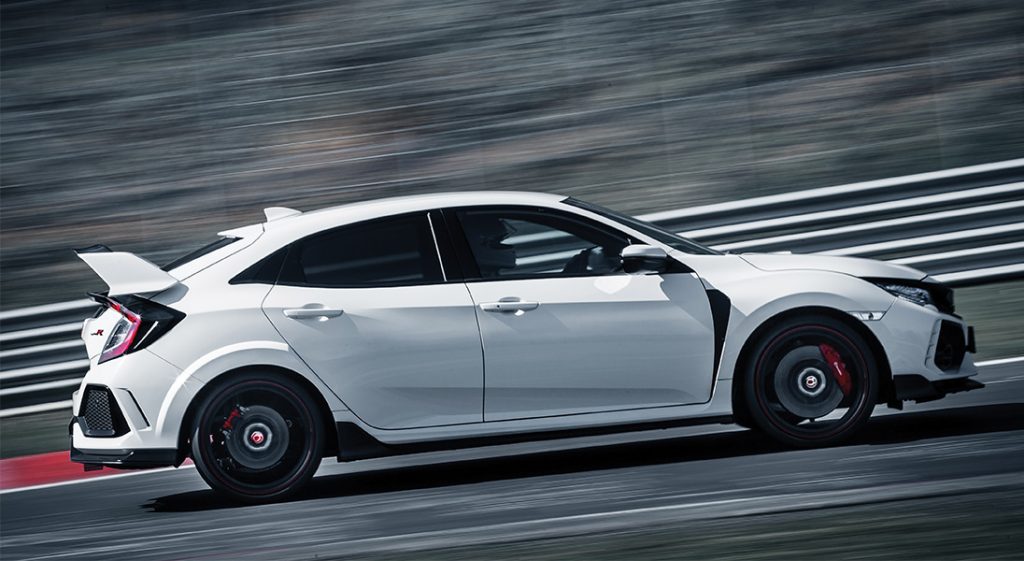 We had the opportunity to not only experience the Civic Type R on the track but also on the street. On the track, the vehicle does everything well and it’s extremely easy to drive. Torque steer is nonexistent, as is the tendency to push in the turns that plagues many FWDs. The engine’s broad power band makes gear selection less critical. Braking is phenomenal. Everything has been engineered and tuned so that few will have any complaints. On the street, the same exhaust that was too quiet while wearing a helmet seems to be right below a level where anyone could complain. The seats that did a phenomenal job on keeping the driver in place on the track are surprisingly comfortable on the road. 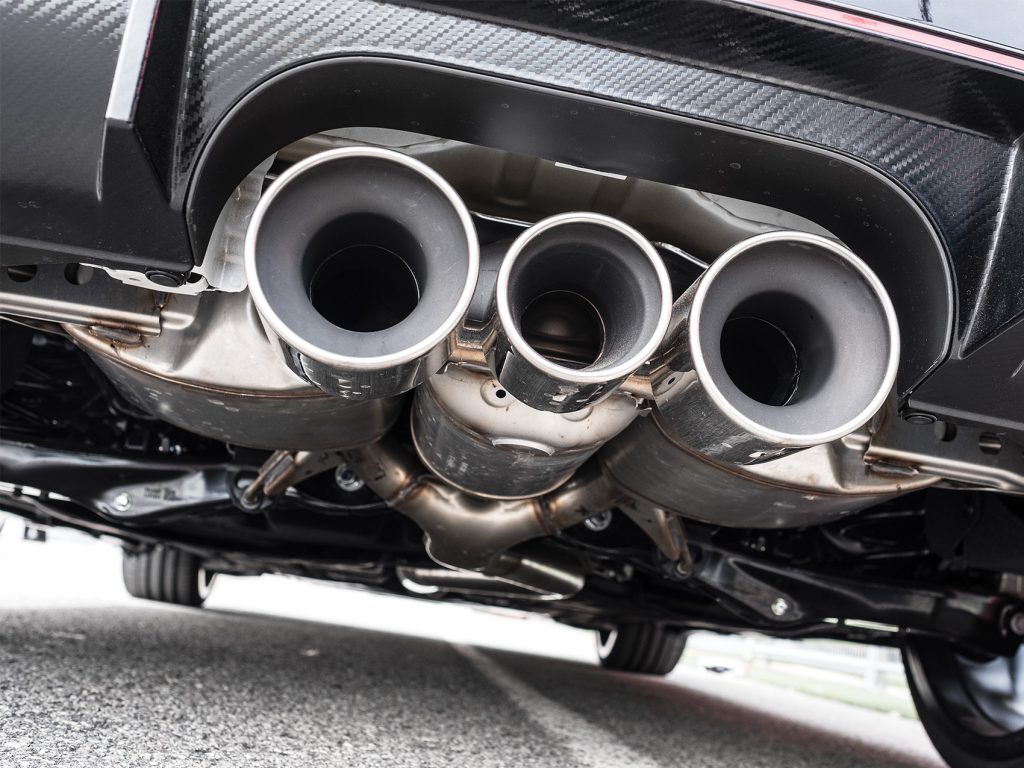 Taking the Civic Type-R on track was a thrilling experience. However, driving with a helmet on makes it nearly impossible to hear the exhaust and have a sense of the engine’s RPM. As such, I spent a good portion of my early laps bouncing on the rev limiter before shifting. Ultimately, I had to dedicate a portion of my attention to the tachometer. The combination of relatively small TD04 turbocharger, catalytic converter, B-pipe resonator and triple muffler exhaust system delivers a drone-free experience that’s exceptionally quiet. If you plan on tracking the car with a helmet on, order a shift light now. 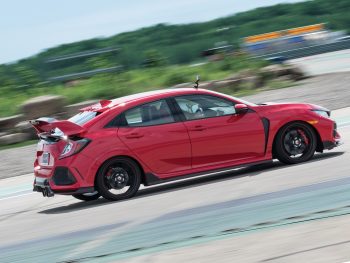 Ironically, it’s this lack of complaints that is my only complaint. The Civic Type R is extremely well balanced. It is like that honor roll student athlete that does community service and is nice to everyone at school. There is no reason to dislike them, but for some reason you do. Don’t get me wrong, the Civic Type R is an exceptional vehicle worth every penny. But, the Type R’s lack of flaws produces a lack of personality. It needs to suck at something so that it requires a driver with skill to help it. Coming from the guy that always had the crazy girlfriends, maybe I’m not the best to judge. Still if I were to purchase one, my goal would be to give it more personality. After all, balance is boring. Maybe a turbo upgrade with 450 horsepower to the wheels would induce some torque steer. Maybe a valvetrain upgrade and ECU reprogramming that lets the K20 rev to 8,500RPM would do the trick. Maybe modifying the factory exhaust or an aftermarket exhaust could give it a bit more voice. Fortunately, there will be no shortage of aftermarket companies producing parts for the Civic Type R. Hopefully, some of those will actually work well too. 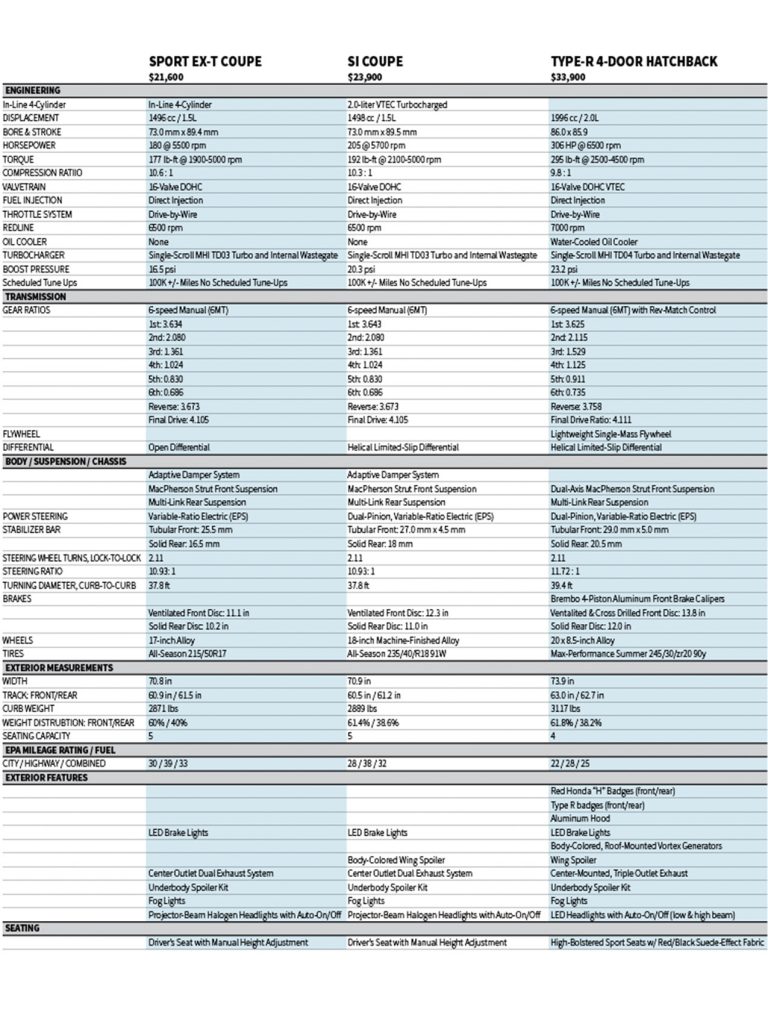 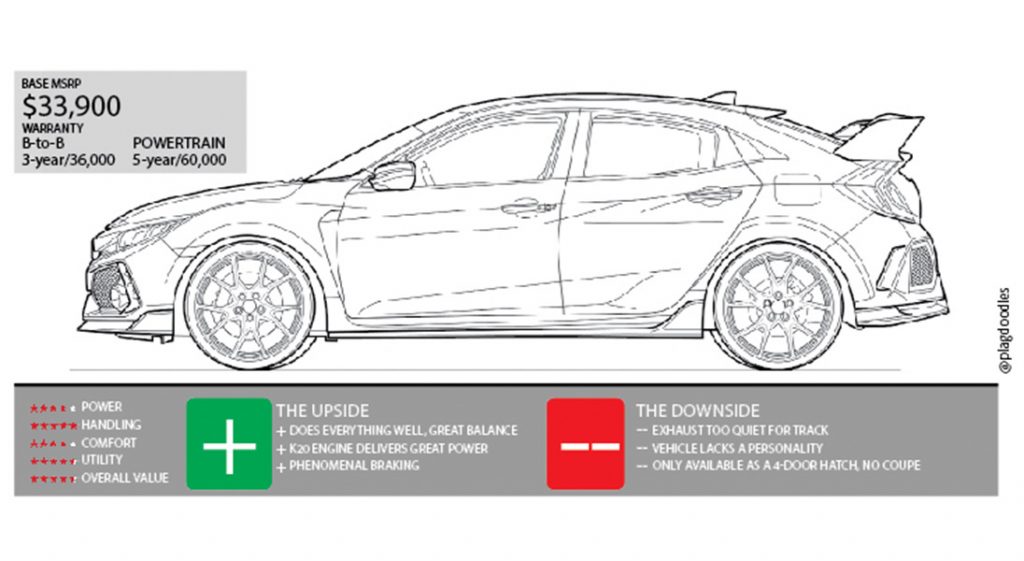 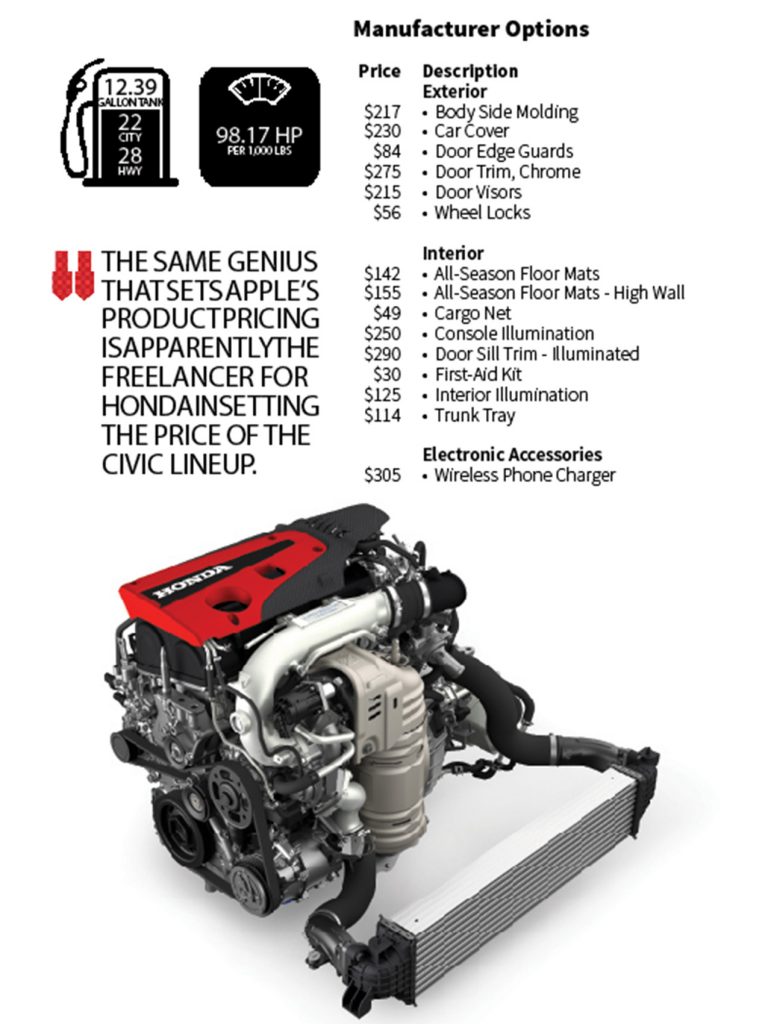