If you’re looking for the most diehard motorsports competitors, look no further than rally. What other type of racing puts cars on a racecourse that comprises paved asphalt, mud and gravel? Where else do participants race in the dry, rain and snow? Beyond the challenges in terrain and conditions, rules forbid rally competitors to practice the course before racing it, making a co-driver an absolute necessity. As drivers speed along into the unknown, they rely on the co-driver’s directions to get a sense of where the road leads, enabling them to push the car to the edge of dangerous racing paths. In April 2016, the Rally America series traveled to Portland, Oregon for the third round of its racing season. This event, named the Oregon Trail Rally, delivers no shortage of dangerous and exciting roads. To get a firsthand experience of the challenges and thrill of the sport, I filled the co-driver’s seat for a weekend on the Oregon Trail. Text by Cameron Parsons // Photos by Randy Montgomery, Cameron Parsons and Trevor Wert (DirtFish) // Illustrations by Paul Laguette 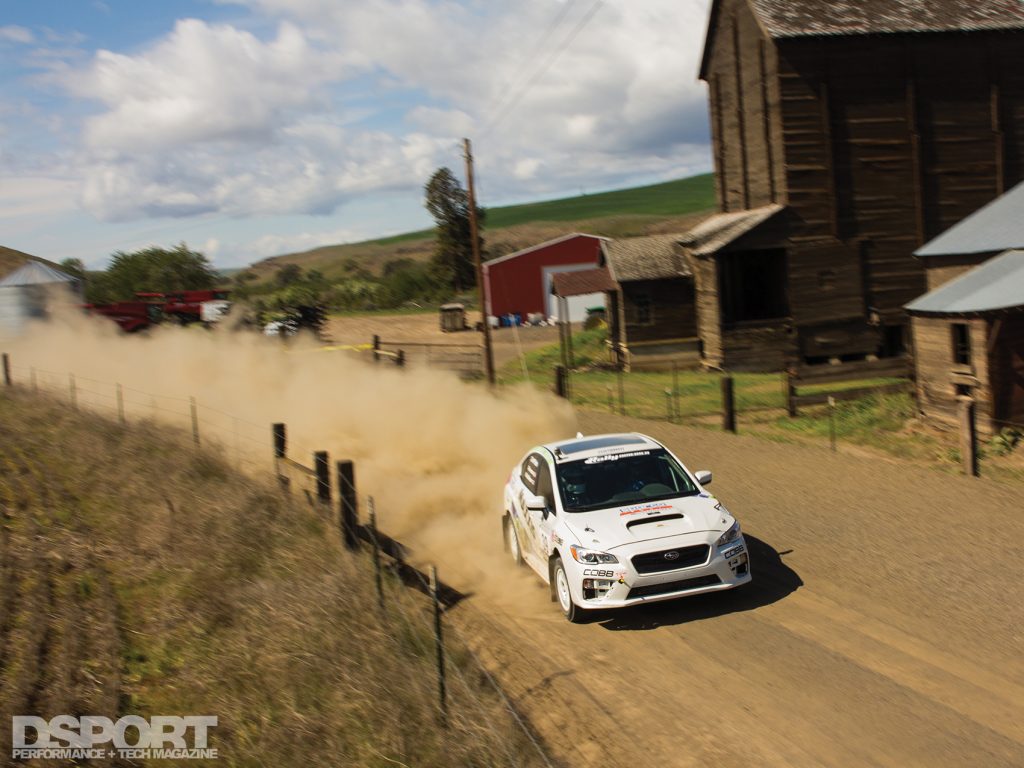 In issue #169, we highlighted the parts and processes that went into converting a 2015 Subaru Impreza WRX into a rally racecar to compete in Rally America’s Super Production class. While Todd McAllister of Team Driven to Find a Cure was set to pilot the car, we worked with Ralli Candi shop owner, Brent Smith, to build and prepare it for rally racing. The brutal conditions of dirt and gravel, boulders, jumps and more over the course of over 100 miles called for stronger vehicle components, particularly in the unsprung weight items that would take a majority of the abuse. This led us to a set of 15-inch Enkei RC-G4 wheels, wrapped in Maxxis Victra R19 rally-specific tires to put power down to the ground and carry the car through corners. Feal Suspension’s 460 coilovers sit on all four corners, featuring a high-strength monotube design and custom damping settings to deliver cornering performance throughout a race weekend. Inside the car, a Fleet Works Services rally-spec roll cage protects the vehicle occupants, who strap into a pair of Sparco Pro-ADV racing seats with Sparco six-point harnesses. 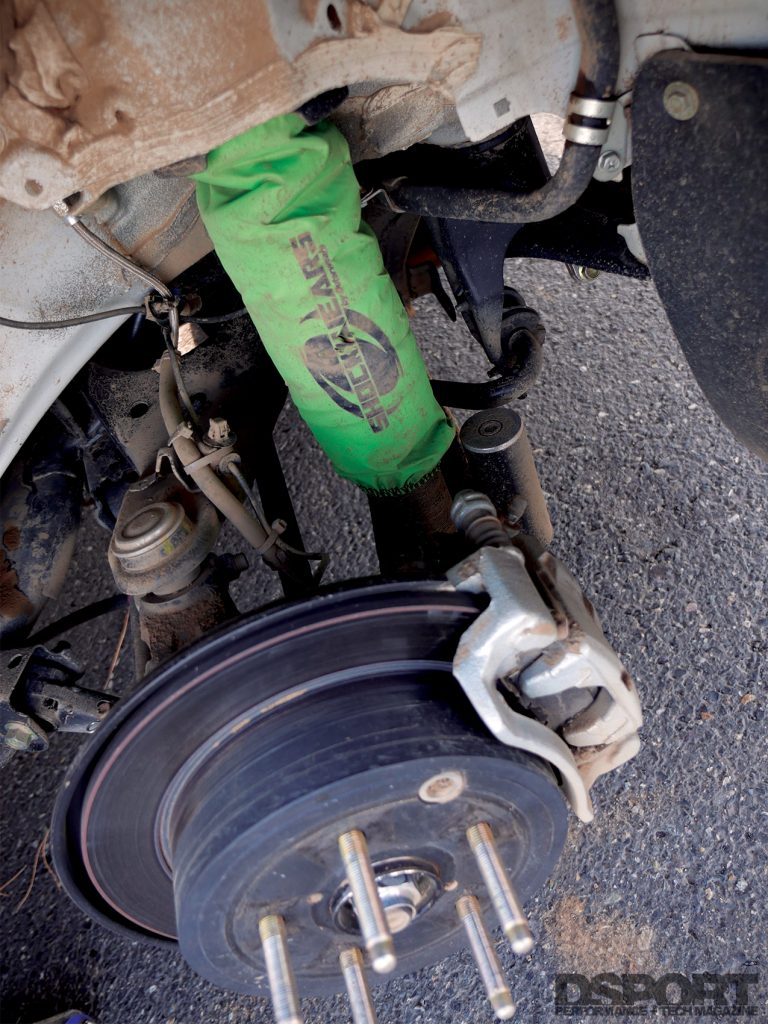 The Feal Suspension 460 coilovers held together and performed to their fullest throughout the weekend, a rare case in rally events where shocks regularly blow out and bend out of shape.

Although the Super Production class forbids most engine performance modifications, the rules allowed us to utilize a Cobb Accessport and turbo-back exhaust to draw out additional power. This WRX may not see any massive power increases, however, the clutch would face constant heavy strain due to standstill launches and frequent left foot braking. In order to lay the power down through all four wheels without any slip, an Exedy Stage 2 clutch transfers power from the engine to the transmission. With all the pieces in place, the WRX went into the trailer and journeyed up to Portland, Oregon for the third round of the 2016 Rally America season. 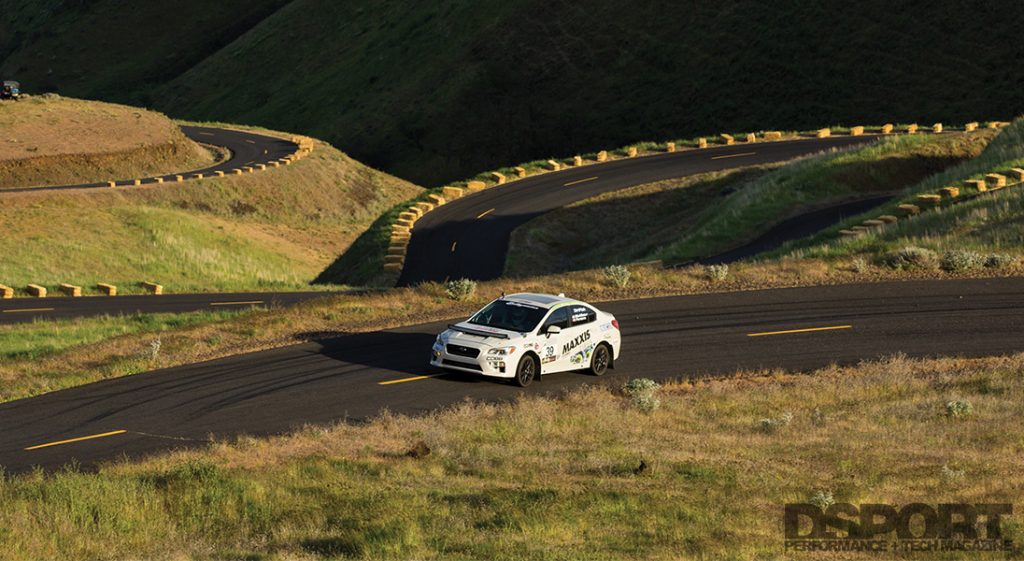 Two of the event’s stages included the Maryhill Loop, a short 2.64-mile stretch of twists and turns on a tarmac surface with steep drops off the side.

Every rally racecar requires two personnel to compete: a driver and a co-driver. You can guess what the driver’s primary job is, so what does the co-driver do? First, picture the types of roads you commonly find in rally. They weave through forests, up mountains and across largely untouched wilderness. Given the varied environments, many obstacles like hills and jumps, bridges, narrow pathways and deceptively sharp turns will be part of nearly every rally event. Rally racing does not allow its participants to practice any of the stages beforehand, leaving the driver nearly clueless for what to expect of the road ahead. This is where the co-driver steps in, providing directions and essential information to the driver. Due to the high speeds and vast quantity of information that must be communicated to the driver, co-drivers read the pace notes aloud nearly nonstop, describing the upcoming two or three turns ahead. A successful driver and co-driver pairing can send the team to a flawless win, however a single bad call in navigation can potentially end the race weekend with a wadded up ball of what used to be a car. At this level of racing, there’s no room for error.

Our rally weekend took off to a great start, however, any race weekend wouldn’t be complete without its share of challenges. On day three, we rolled up to the first of the final five stages and discovered that McAllister and I lost radio communications due to faulty wiring. This meant that at speed, no matter how loud I’d yell, he wouldn’t hear my directions. After taking only the first few turns without direction, I resorted to reviving my old driver coaching methods of hand signals. Through a series of pointing out turns, specifying their severity and signaling other basic instructions, we completed the first three stages of the day, albeit slow, but at least safe. A quick trip through service before the final two stages of the weekend provided us time to rig up a quick repair to the radio system, check over the car and get to the next stage start. 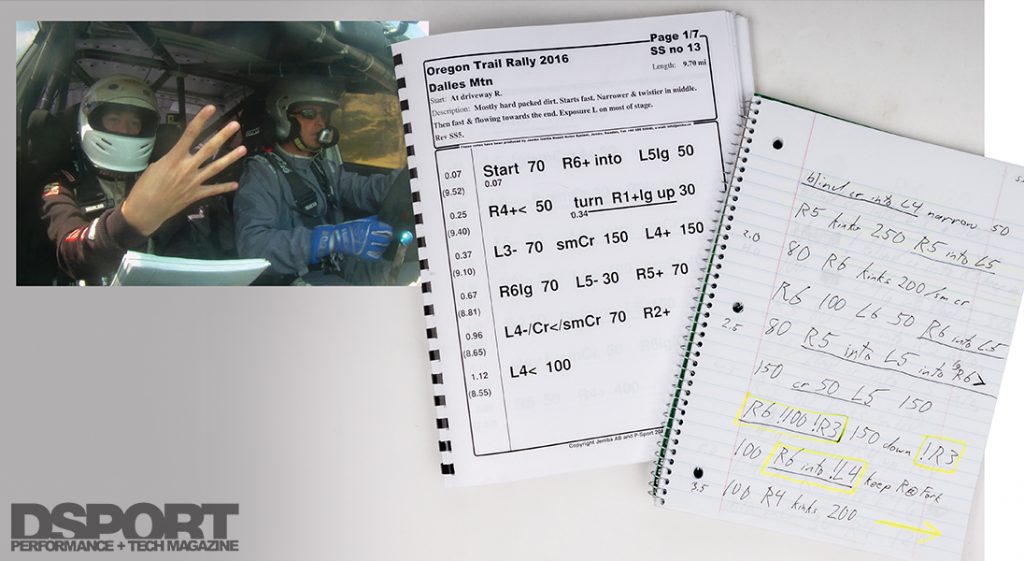 Co-drivers work off of a special form of shorthand notes in order to quickly communicate directions and course details to the driver. 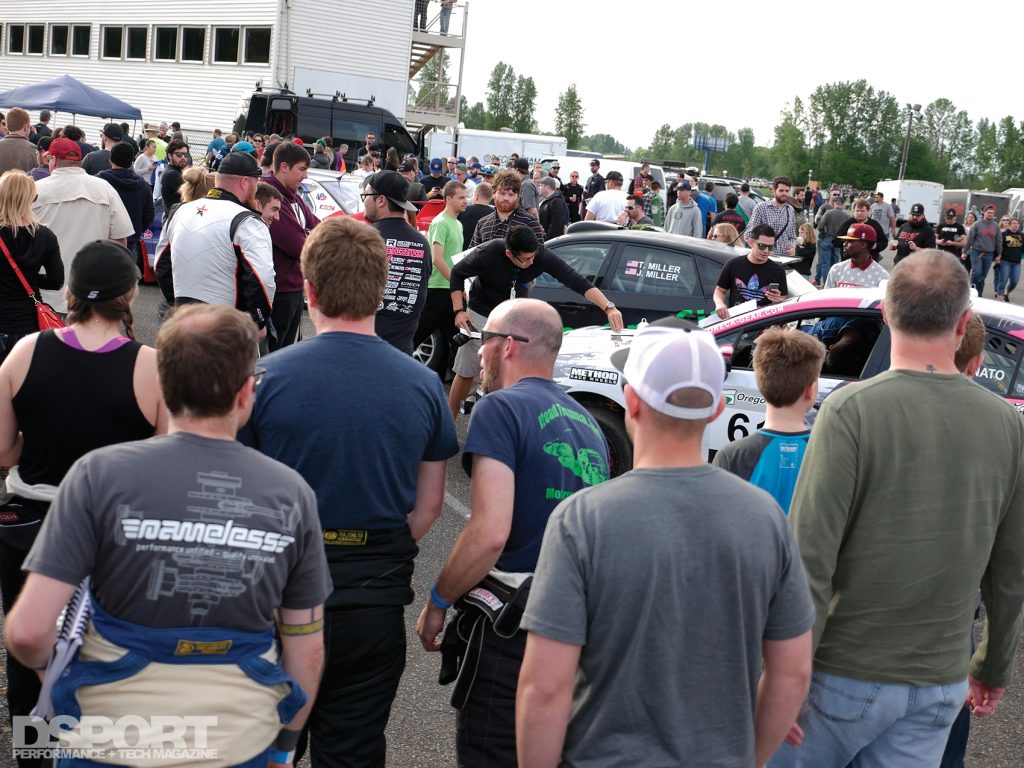 The 2016 Oregon Trail Rally began at Portland International Raceway, a scenic racetrack nestled near the heart of the city. This venue served as the location of the first four stages of the weekend’s 18 stage rally, utilizing sections of the paved track, mixed with gravel access roads and other off-road sections. With only nine total racing miles taking place here, I wanted to use this opportunity to learn the essentials of navigating and timecard tracking. However, with these first four stages taking place at night and the provided pace notes being full of errors, I found myself with few tools to navigate and McAllister was thus tasked with having to drive based only on what he could see. It was a shaky start to the weekend, giving me no chance to practice reading out pace notes, yet day two lay just around the corner and would introduce the most dangerous roads of the entire event. 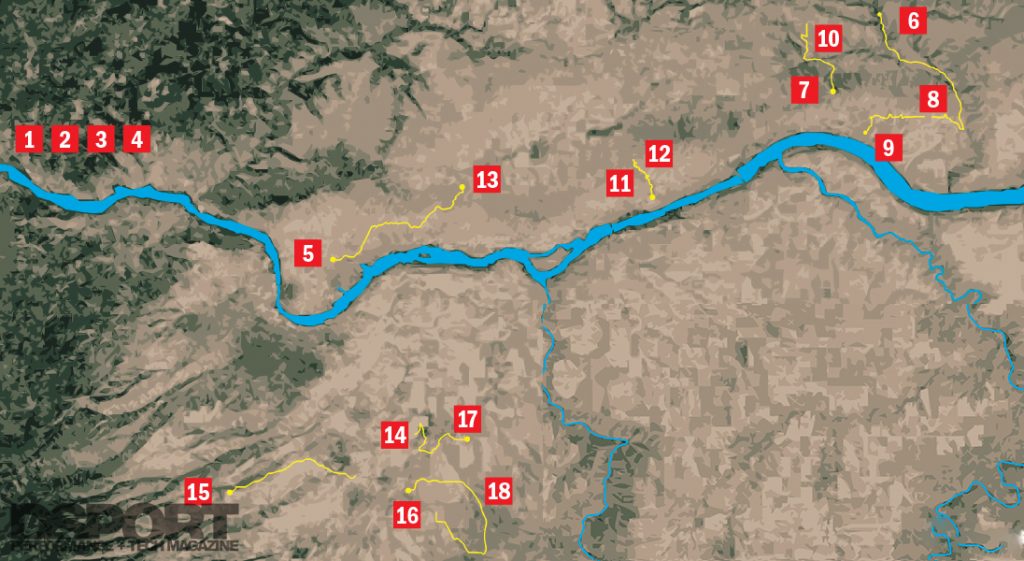 The Oregon Trail Rally serves as one of the highest-caliber events on the Rally America schedule. Over the course of three days and 113 racing miles split among 18 separate stages, this race is also one of the most grueling and punishing to its participants and their vehicles. While many competitors aim for a podium finish, everyone enters with the understanding that simply making it to the end is an accomplishment of its own. Even with these challenges known, McAllister invited me, a complete rally newbie, to co-drive for him.

The second day of the Oregon Trail comprised a total 64 racing miles split between stages five through 12, varying between glass-smooth tarmac and rough gravel roads. Half of the stages included blind crests and corners, and ran along unforgiving mountainsides that dropped hundreds of feet down. Roads like these demand full trust between the driver and co-driver, with serious consequences for any errors. To our advantage, my pace notes were on point and we quickly found a good rhythm of communication in the beginning stages of the day. While we were off to an excellent start, we began witnessing cars dropping like flies halfway through the day. We passed by competitors that were broken down, changing a tire or had rolled off the road. As we waited in line to start a stage, one of the other drivers was in desperate search of brake fluid to temporarily hold them over from a leaking caliper. While problems continued to rack up for the competition, we found ourselves trouble-free by the end of the final stage for the day. At this point, we had 39 racing miles split among five stages to complete the next day. 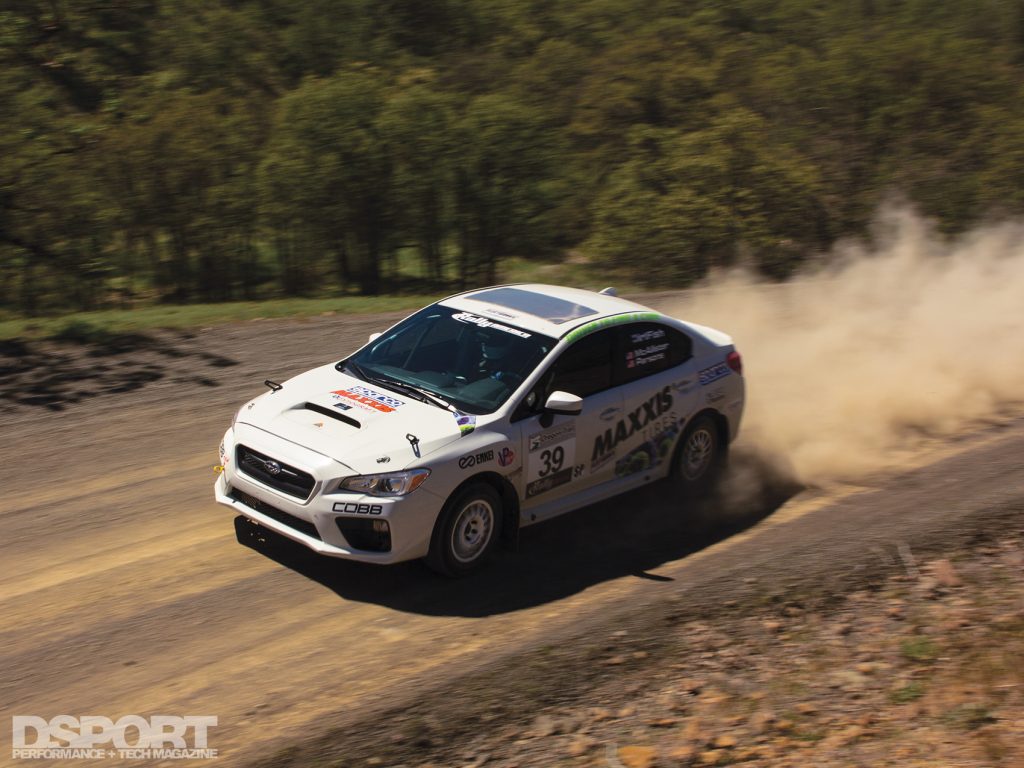 After struggling with communications system issues in the morning stages on day three, we took to the final two stages at full force. Despite the steep mountainsides, high speeds and loose gravel, McAllister drove harder than he had all weekend. He pitched the car sideways at highway speeds, pulled the handbrake for sharp hairpin turns, and kept the throttle pinned into and over the final 75 MPH jump in the last stage. Despite the hard driving and the rough roads, the WRX made it to the end fully intact and still running. While the slow stages without communications hurt our overall time, we made up for it at the end and earned a fourth place finish in the Super Production class.

In the normal fashion of rally racing, the Oregon Trail Rally proved itself to be a battle of attrition. Out of the 48 total cars that entered the weekend, only 32 made it to the end. Although our WRX finished the race successfully, the underside of the car reflected the abuse that 100 miles of rallying can cause. Dents and dings filled nearly the length of the exhaust, front skid plate and fuel tank, and one of the suspension arms on the left rear wheel folded in on itself, likely from the final jump. Despite the strain on the suspension components, the Feal 460 coilovers survived the rally, looking and performing like new. The wheels and tires frequently take a bulk of the abuse in rally, being the point of contact with the road. However, the Enkei RC-G4 wheels and Maxxis Victra R19 tires held together throughout the weekend, without a single puncture or debeading. The tires not only held up through all three days, but they maintained their level of grip and showed very little wear.

Our 2015 Subaru WRX handled the entire rally fantastically to the end. However, it wasn’t completely void of damage. Bumps and rocks took their toll on the exhaust and fuel tank, and the final jump bent a suspension arm.

We had entered the weekend with an expectation that I’d regularly screw up our navigation, that we’d be changing tires midway into a stage, and that for any number of reasons we’d be joining the cars that did not make it to the end. To our grateful surprise, nearly all went according to plan with stellar results and fantastic performance out of the car and its parts. As fun and exciting as it was, rally racing proved itself to be one of the most mentally-draining forms of motorsports that I’ve taken part in. The importance of communication and problem solving between the driver and co-driver calls for much more than simply focusing on driving fast. They must constantly analyze, plan and execute every bit of the 113 stage miles together as they approach them. Day or night, dry or wet, gravel or tarmac, rally teams and their cars face it all. Despite the many challenges of competing and cheating death on dangerous roads for three straight days, I can’t wait until I get to do it all again. 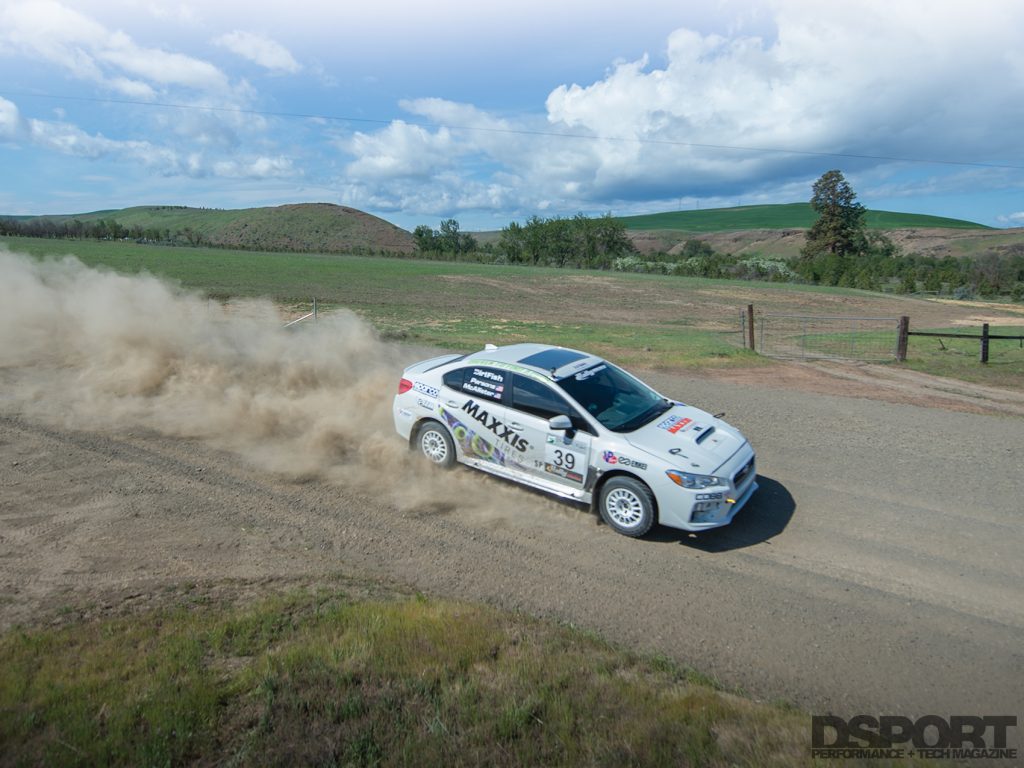