Though the amount of money and time that professional car tuners have to work with may discourage the everyday car enthusiasts, Paul Coggeshall’s story is one that should brighten everyone’s outlook. Pure enthusiasts can see the beauty in project cars, even when others can not. In 1999, a 1997 Honda Civic hatchback with a blown DX motor caught Paul Coggeshall’s eye. In addition to the motor being completely worthless, the body had also been vandalized. However, the price was in budget, the frame was intact and the car itself would prove to offer a solid foundation for performance. Over the course of time, Paul was able to do miracles to a car most would consider junk. With hard work and the right parts, Paul was able to turn his car into a vicious machine that has beat countless corvettes, mustangs and vipers on the street and on the strip, while earning this Hatchback the nickname of “the V8 Killer.” Although not his intention from the start, the performance-building process would eventually result in his car being the first PRO-AM IDRC Class vehicle to be featured in DRAG Sport magazine. Text by Victoria Wang / Photos by MJ Ferrara 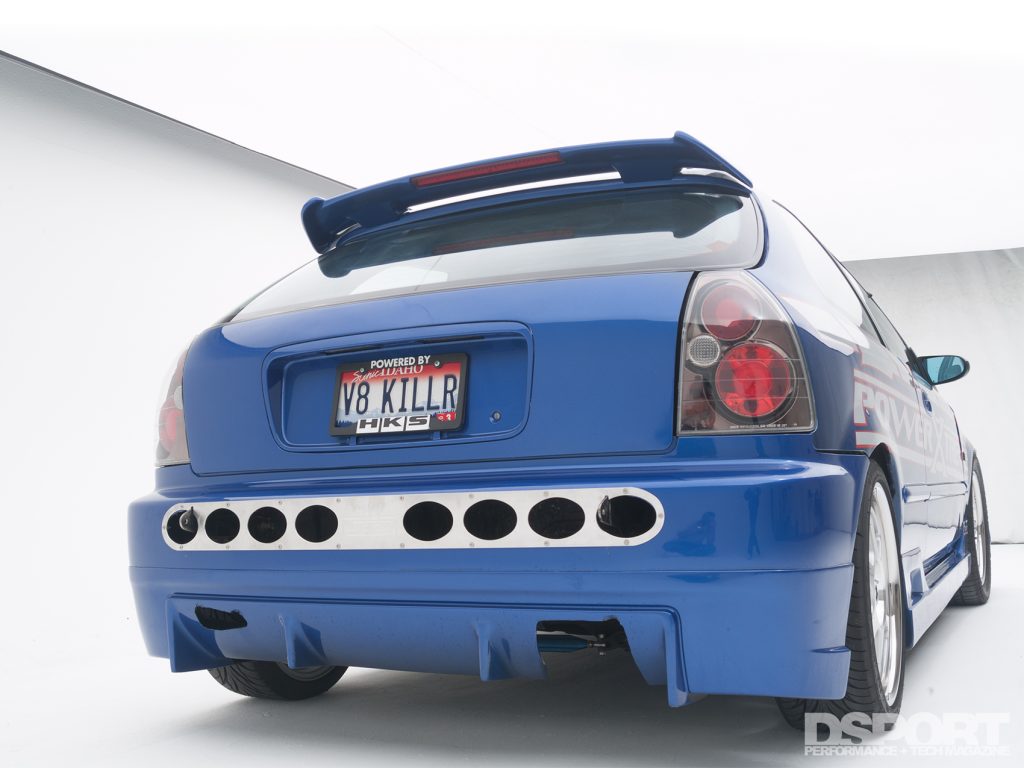 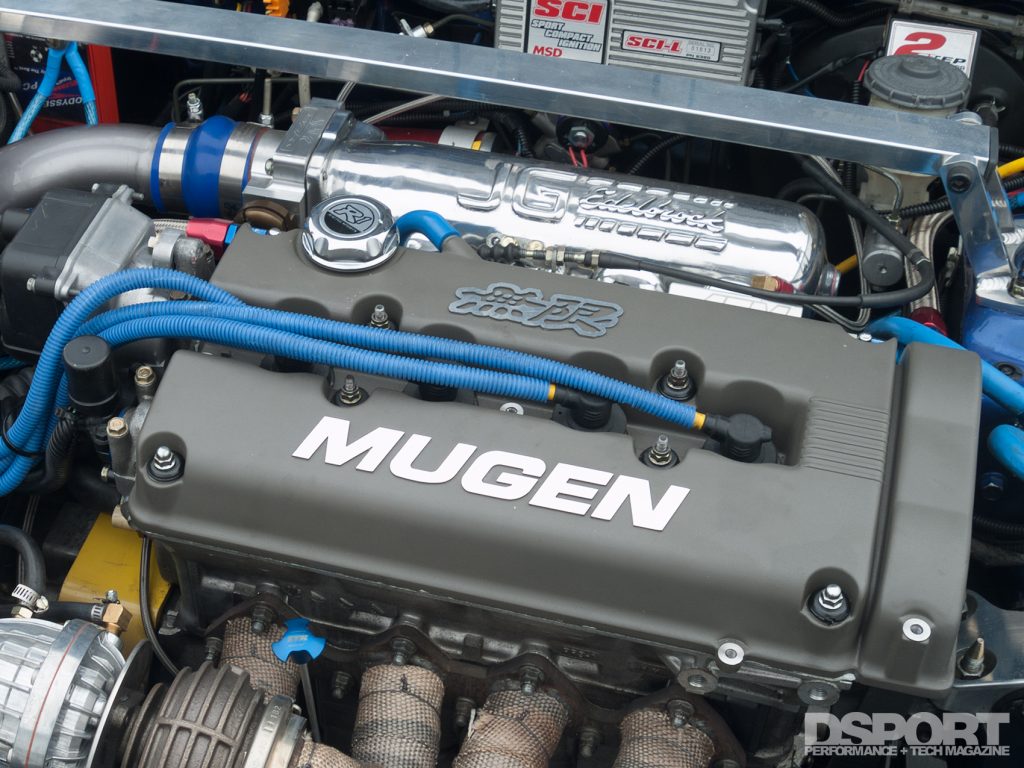 The first thing that Paul had to do after the purchase of his car was to purchase a working engine. Once again, the budget was realistic so a 1.8-liter DOHC non-VTEC LS engine swap was chosen. To expedite the swap and secure the engine in place, a HASport engine mount kit was called upon. With the LS conversion in place, a Stage-III Power Xtreme turbo kit was bolted in place. This basic combination allowed the car to drive at 12.8@111mph on street tires. When 12s stopped feeling as fast as they used to and some more funds were available, Paul, with the help of Power Xtreme, pushed for the full meal deal. A fully sleeved LS block was bored and honed to 83mm cylinders. In the blueprinted assembly process of the bottom end, Arias 9.0-to-1 forged pistons were teamed with 4340 steel connecting rods from Crower, a Type-R oil pump and a factory crank to round out the bottom end. Up top, Paul was looking for more than the non-VTEC cylinder head had to offer. 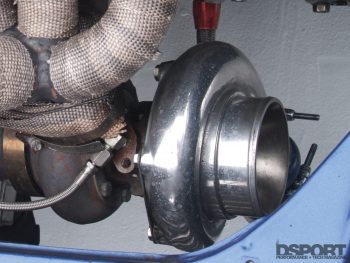 It was time for a VTEC conversion. A B16 head was sourced and sent to KG Engineering to have a Stage 3 makeover. Crower camshafts and a JG Edelbrock Victor X manifold completed the top end. To provide the boost, a South Florida Performance (SFP) T04X turbo, HKS racing wastegate and Blitz SBC boost controller can pressurize the intake up to 37psi. Before getting into the engine, the high-pressure air is fed through a massive XS Engineering intercooler. Getting additional air into the engine is half of the horsepower battle, the other half in ensuring that enough fuel is present. To that end, fuel supply is handled by an Aeromotive fuel pump and pressure regulator combination. This supply feeds a set of four Holley 980cc fuel injectors under the control on a Haltech E6K engine management system. To top it all off, a 75-shot nitrous oxide system from Nitrous Expressprovides the performance difference at the touch of a button. With the ability to generate 588 horsepower at wheels through a custom A’PEX Integration three-inch exhaust, the ignition and cooling system also was addresses.An MSD SCI-L ignition box and Crane LS92 coil light off the ignition process while a Fluidyne radiator and FAL electric fan provide the cooling. On the drivetrain end, a factory B16 transmission, Quaife LSD, Clutch Masters Stage 5 clutch and Drive Shaft Shop Stage-5 axles send the power to the 24.5×8.5×13 slicks at the strip.

Originally, Paul had hoped that the car would one day be a competitive Quick Class contender. With full interior in place, Paul quickly realized that the car’s weight did not allow the car to be a competitive contender. Without the backing of a six-digit sponsor and since this car was so fun to drive on the street, Paul came up with a different gameplan. Race PRO-AM FWD. The IDRC PRO-AM FWD class would provide an opportunity for Paul’s Civic to shine. Currently, the Civic holds a best elapsed time of 10.4@137 mph in the class. While 10s are impressive for a full interior, street Civic, plans are in the works to reset the record with a 9-second pass by the end of this season. A new T66 turbo from SRP will hopefully take center stage in producing 650 to 700 horsepower at the wheels. After the 9s, what’s next? Paul and Power Xtreme have joined forces with HASport to create another monster. This time the platform will be a 2002 4-door Civic. Will this new car be the next “fastest PRO-AM FWD”?. We’ll just wait and see. 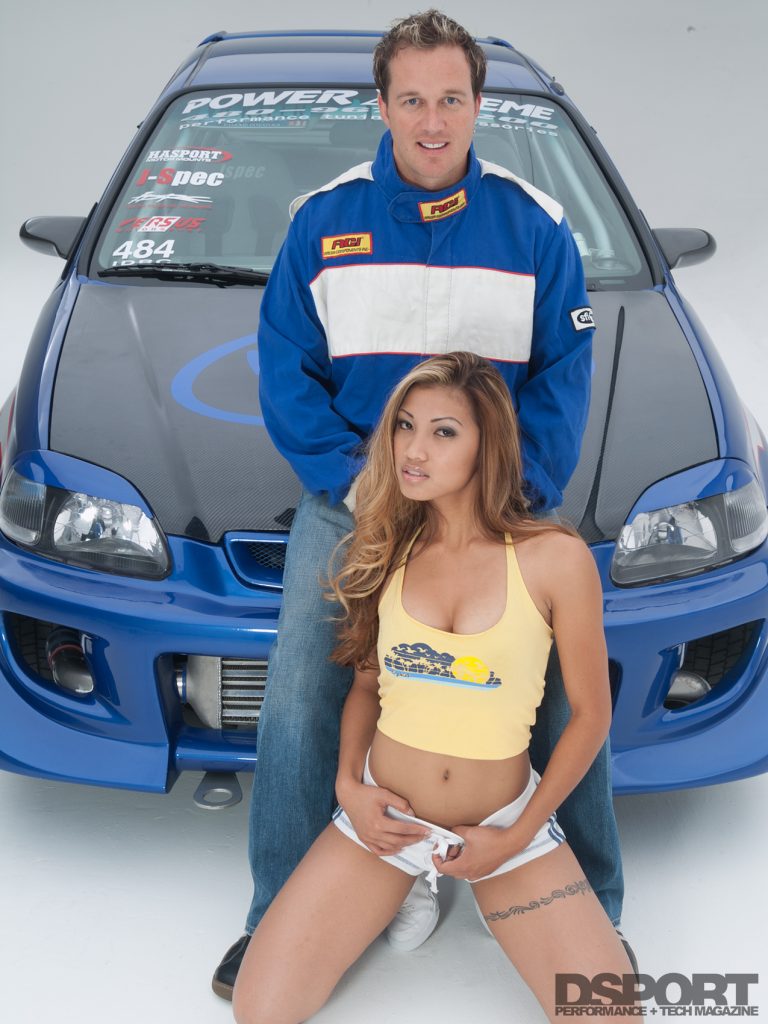 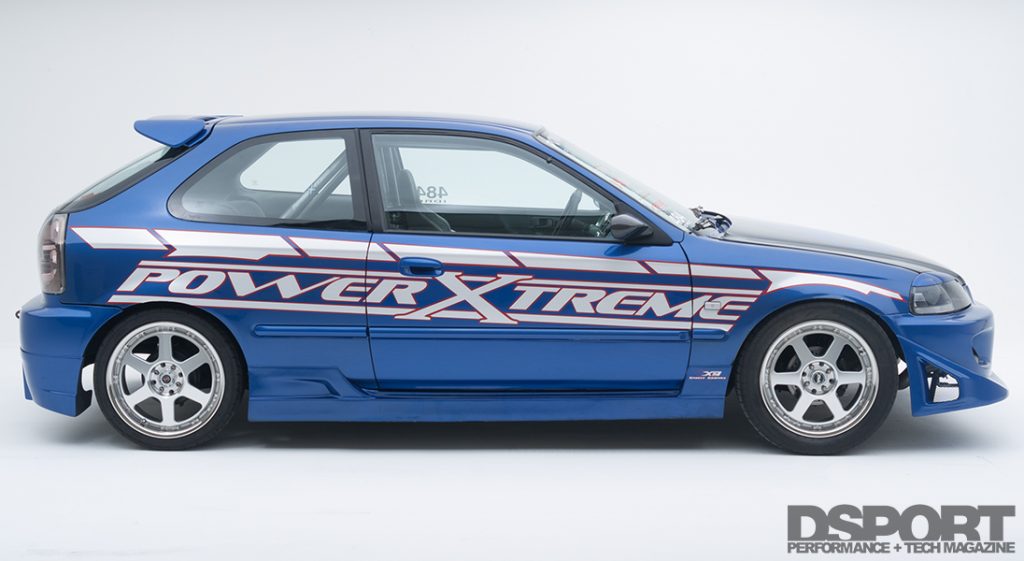