You are at:Home»The Cars»Features»4.2-liters And Two Turbos Boost The Nissan 350Z To New Heights

Six cylinders, twin turbochargers and a half liter of additional displacement can only equal one thing: stuff-you-in-your-seat exhilaration. As if the torque of a solid 3.5-liter V6 engine weren’t enough, imagine the thrust of over 4-liters combined with 19 psi boost pressure. The end result: 763 horsepower and 646 lb-ft of torque to the rear wheels.

GReddy Performance Products realized the potential of the VQ35 engine with the release of the first Nissan 350Z in 2002. They wasted little time developing the first twin-turbo systems for the platform and came to the market with an attainable bolt-on turbo system that typically put over 400 horsepower down to the wheels with a stock longblock. This also happened to be the threshold of reliability for the VQ35, as the factory rods weren’t engineered for significant levels of forced induction. But what could be accomplished with a reinforced block? GReddy sought to answer this question as well with their 2007 350Z SEMA car. After earning the Grand Turismo Best Japanese Vehicle award at SEMA 2007, it was clear that this car had far grander potential than had been originally uncovered. The plan was to address the known issues and develop more, but reliable, horsepower.

The VQ35HR longblock was pulled, dismantled and prepared for machine work. The aluminum shortblock went to Darton International to receive a set of ductile-iron M.I.D. sleeves. These sleeves handle significantly greater cylinder pressures compared to the factory alloy sleeves. Once sleeved, the block was sent to Millenium Motorsports to be bored and honed for 96mm pistons. While the Darton M.I.D. sleeves can be bored to a maximum of 100mm, GReddy selected this slight bore increase to match its prototype stroker crankshaft. The engineering department developed a prototype stroker kit that would increase the stroke from the factory issued 81.4mm to 96mm. This “square” bore and stroke dimension yielded a new displacement of 4,170cc. A set of prototype GReddy connecting rods and 8.0:1 compression forged-aluminum pistons connect to the stroker crankshaft, completing the shortblock assembly.

Up top, the cylinder heads remained stock, while ARP head studs provided the clamping force to seal the GReddy 0.7mm head gaskets between the heads and block. The ARP studs ensure that the heads won’t lift under increased cylinder pressures. GReddy Easy camshafts (264-degree intake, 267-degree exhaust, 11mm lift) actuate the factory valvetrain atop each bank of cylinders. Compared to the stock duration and lift (248-degrees, 10.5mm lift) the Easy cams stay open longer and open the valves further to facilitate greater airflow in and out of the cylinders. 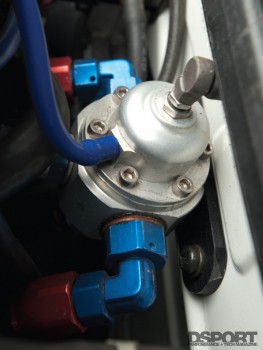 In order to meet the fuel supply demands of the build, the fuel system received a complete makeover. Starting in the fuel tank, a custom dual-pump setup featuring a pair of Walbro 255-lph pumps and an in-tank regulator replaced the factory unit, providing a significant increase in fuel volume to the engine. A GReddy custom fuel-return system was plumbed in to maintain constant fuel pressure to the six pack of RC Engineering 750 cc/min injectors. The injectors and factory ignition receive fuel metering and timing instructions from a Haltech Platinum Pro plug-and-play engine-management system. This system makes installation simple without cutting and splicing, tuning a smooth process and full-adjustability ensures flawless engine function. Ready for tuning, the Z33 took a trip to SP Engineering. In the hands of GReddy tuners, the fuel and ignition were optimized to work with 19 psi boost pressure, regulated by a GReddy PRofec B-Spec2 boost controller. After the tuning session on the Dynojet dynamometer was finished, the turbocharged and stroked VQ generated 759 horsepower to the wheels with 668 lb-ft of torque. 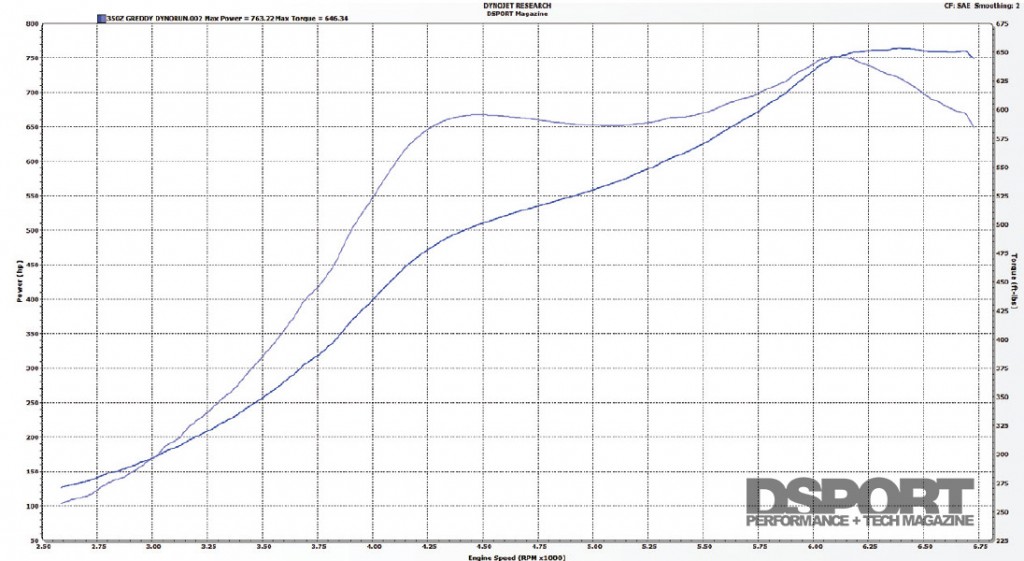