You are at:Home»The Cars»Features»642 HP G35 Aims For The Time Attack Title

WHEN THE COMPETITION IS FIERCE, A RACER MUST STEP UP HIS GAME OR PACK UP AND GO HOME. Not one to hold back, Peter Milian of BC Racing Suspension looked at the 2008 Redline Time Attack championship with hungry eyes. His dedication to the series and the fight for the top spot is reflected in the build of this Infiniti G35 coupe. While Peter admits that this has got to be among the heaviest of the time-attack competitors, he still makes no apologies about the car or its performance due to weight or other factors he accepted when first embarking on the build. In fact, Peter’s first year competing in the Redline Time Attack series was littered with adversity. Despite everything from brake failures to engine fires, Peter remained undaunted. As a result, the BC Racing Team managed to secure a second-place finish in the Modified class and a third-place finish in the Unlimited class in 2008. 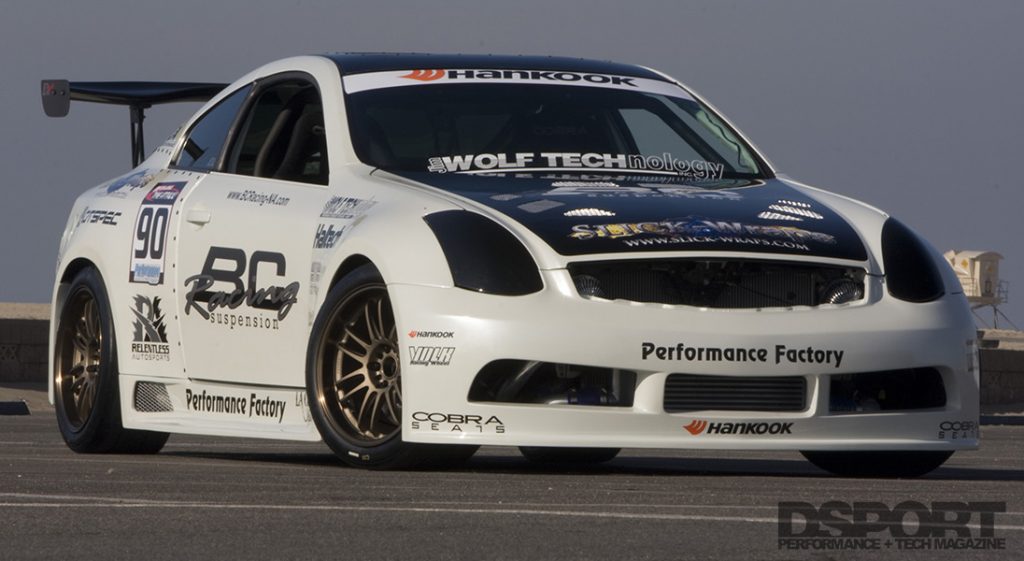 Stepping Up To The Plate

So what does a team with a trial-by-fire racing season do for its sophomore year? They raise the bar and aim for the very top. Supported by Scott Bush of Relentless Autosports, Peter set out to revise the G35 to be more competitive.

The end of the 2008 season signaled the start of the rebuild for the BC Racing Team. The G35 was completely gutted as the chassis went through an evolution. A serious diet trimmed as much weight as possible to regain some advantage in the power-to-weight ratio. With the shell streamlined and any excessive metal cut from the chassis, the body specialists at LA Customs in Orlando prepped the G35 shell for an APR Performance wide-body kit. The fiberglass fender components replaced the factory sheetmetal at all four corners. Matching APR front and rear bumpers replace the stock pieces and match up to the new wider body lines. For additional downforce, an APR carbon-fiber wing sits atop the trunk lid and complements the menacing stance of the wide-bodied shell. Weight reductions on the order of 150- to 200-pounds were realized, leading to a more favorable power-to-weight ratio. 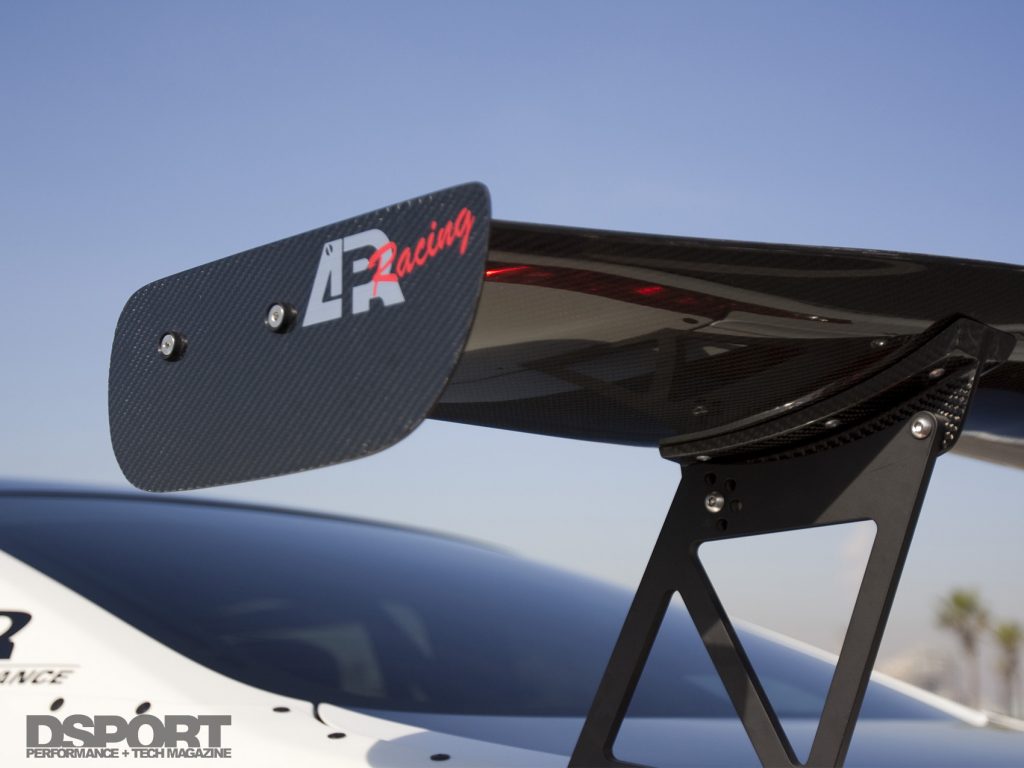 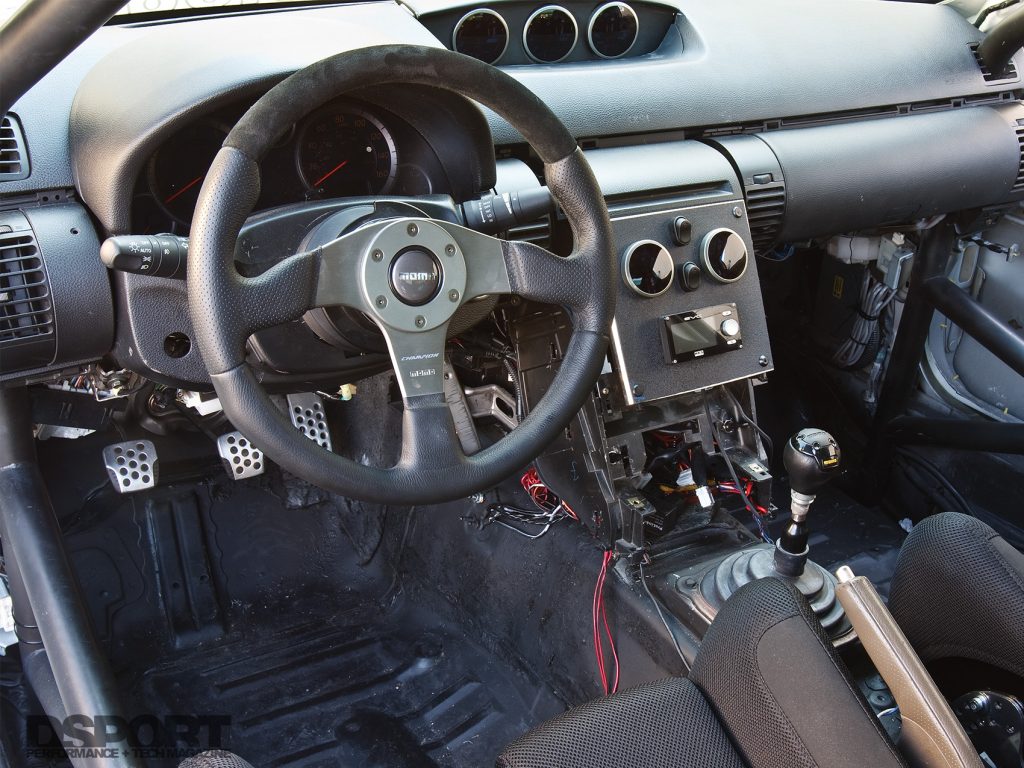 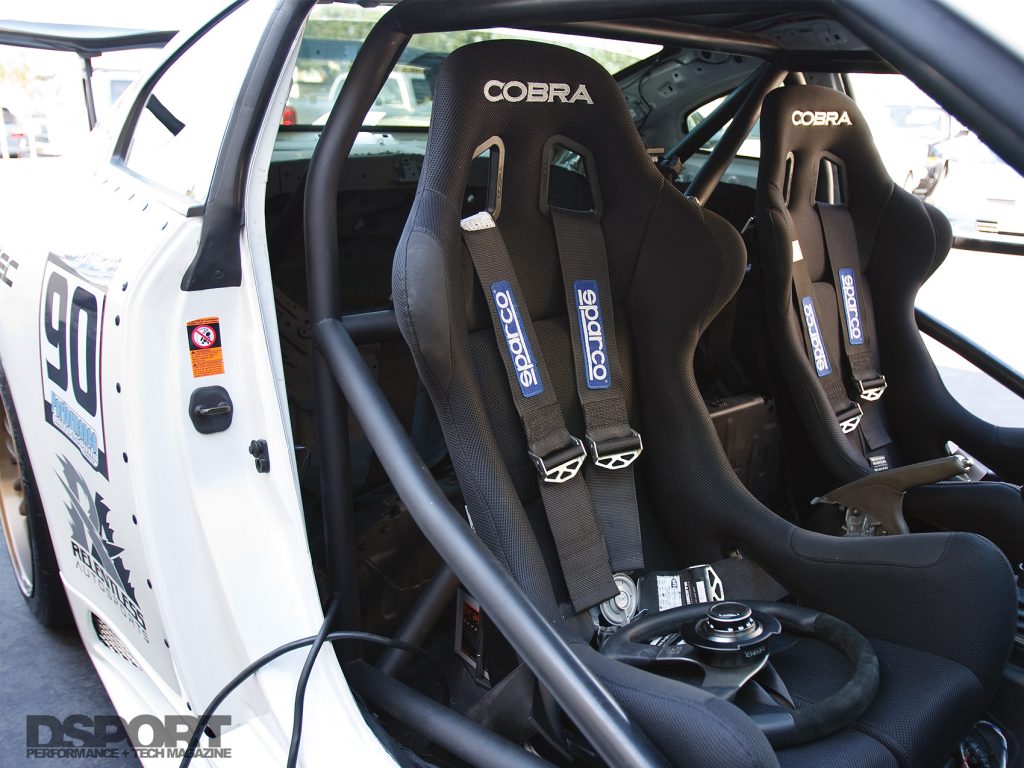 Inside, a six-point cage fabricated by Ultimate Motorsports stiffens the chassis and adds a measure of protection to the driver. The luxurious but heavy factory interior was removed and replaced by a pair of Cobra racing seats outfitted with Sparco 5-point harnesses. In front of the driver, a Momo steering wheel and NRG quick-release hub receive steering input and facilitate easier entry and exit.

With the chassis prepped, Peter wanted to update the suspension with the latest offering from BC Racing, the ER series. Featuring a mono-tube shock design with an external reservoir, the rebuildable ER-series coilovers have greater shock fluid capacity which translates into extended track usage without overheating. The dampers were paired with BC Racing 18 kgf/mm springs up front and 16 kgf/mm springs. This provides a stiff but responsive setup. To further sharpen handling, Hotchkis sway bars supplement the coilovers in the front and the rear. GTSPEC’s strut tower brace and chassis braces further stiffen the chassis for improved response. 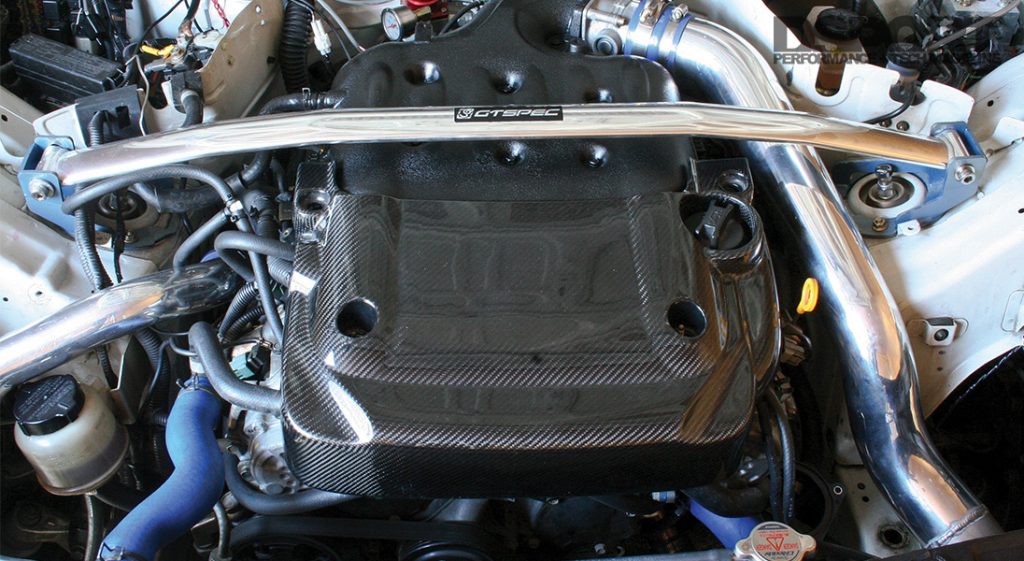 Now that the rolling chassis was upgraded, Peter proceeded to work on generating more power from the VQ35DE engine. After running an entire season on the same block, it was decided that the engine could use some refreshing. The block received a set of 8.5:1 compression forged-aluminum CP Pistons. The pistons make the connection to the factory crankshaft by way of Relentless Autosports I-beam connecting rods. A set of higher-flowing VQ35HR cylinder heads now mate to the block with VQ35HR head bolts and factory VQ35HR head gaskets. A set of Jim Wolf Technology (JWT) HD valve springs replace the factory units in the cylinder heads. These springs are optimized for the JWT S7 bump sticks. The JWT S7 cams feature a 262-degree duration and higher lift for improved airflow. This translates into improved response and a broader powerband. 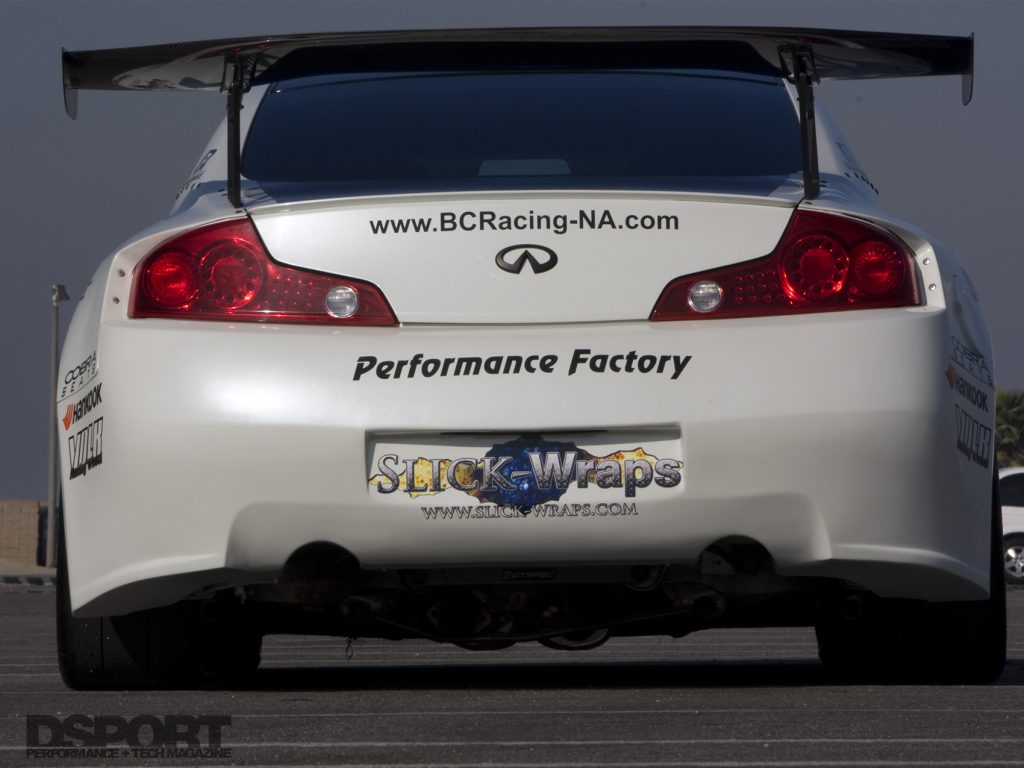 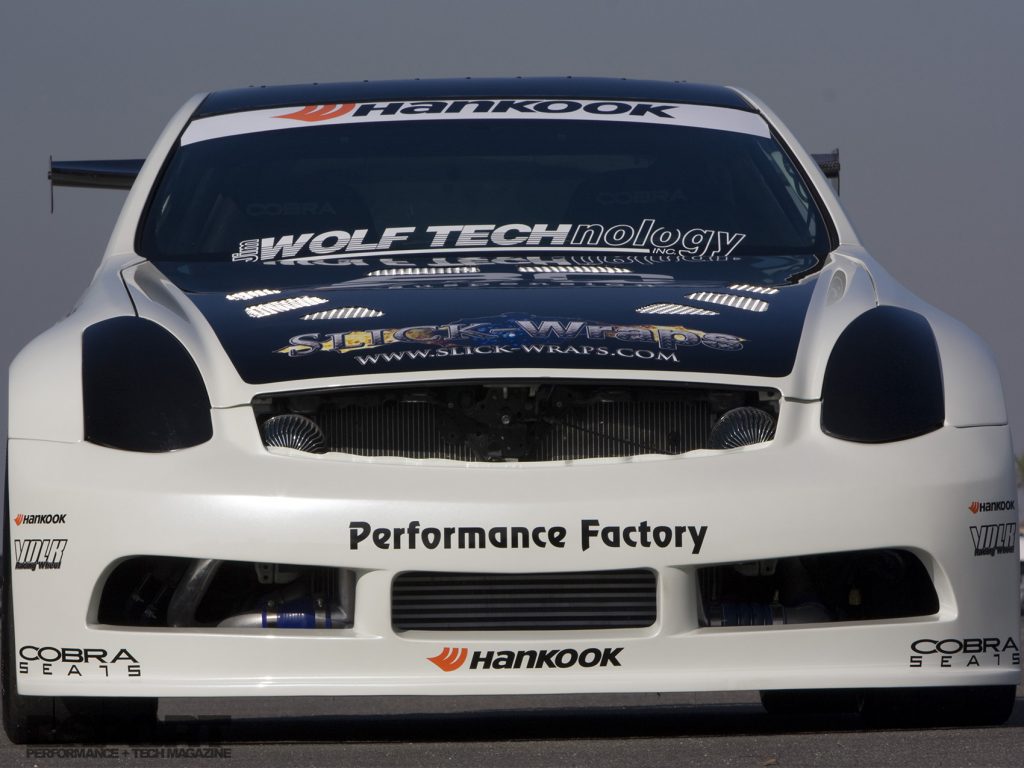 WT manifolds channel high-enthalpy gasses from the exhaust ports to  the inlets of the twin Garrett GT3071R ball-bearing turbochargers. After spinning the turbine wheels, the spent gases flow through TurboXS downpipes and a GReddy EVO TT exhaust system to the rear of the chassis. On the cold side of the turbochargers, the compressors draw ambient air through a JWT air filter before forcing the air into the dual Garrett front-mount intercoolers. Heat is drawn away from the air charge at the intercooler, dropping the temperatures and increasing the density of the charge air. 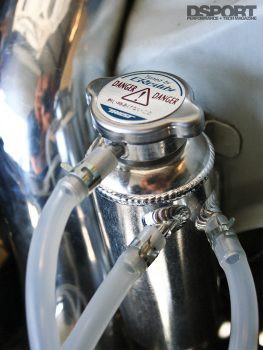 Now that the hardware under the hood was reinforced, providing enough fuel and spark became the focus of the update. To meet fuel demands, the factory returnless style fuel system was scrapped. Now, a pair of Walbro 255-lph intank fuel pumps supply the CJ Motorsports dual-entry fuel rails. Each rail holds three Deatschwerks 800 cc/min fuel injectors that spray VP Racing C16 into the intake ports of the cylinder head. To command and regulate the fuel and ignition events, a Haltech Platinum Pro 350Z Engine Management System was installed under the dash. The Haltech unit sends ignition timing instructions to the factory coils which in turn transmit spark energy to the NGK Iridium spark plugs. With an HKS EVC electronic boost controller regulating boost, peak intake manifold pressure is set to 20 psi. On a Land and Sea chassis dynamomete, the G35 was able to spin the rollers to the tune of 642 horsepower and 624 lb-ft of torque. For comparison, a stock G35 on this same dyno produces 250 horsepower, meaning an increase of 257 percent has been achieved. 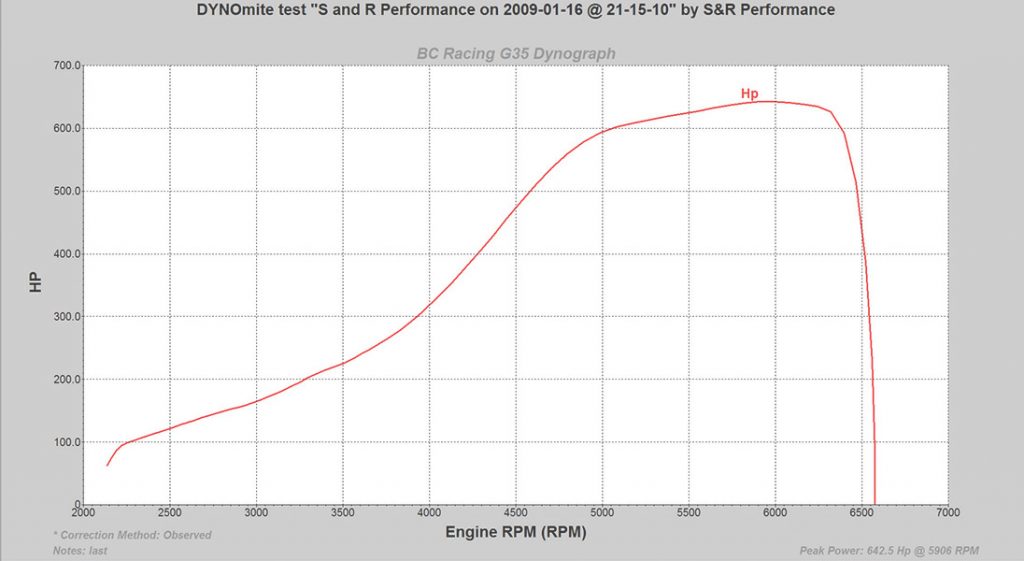 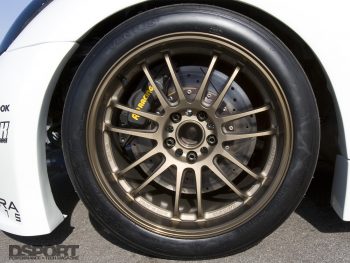 Since generating over 600 lb-ft of torque to the wheels far surpasses the torque capacity of the factory clutch, an upgrade was a must. Peter selected a Competition Clutch Stage-4 system to transfer power at the crankshaft to the transmission. The transmission, in turn, sends power through the factory driveshaft to the rearend fitted with a NISMO limited-slip differential. The differential divides the power sent to the Volk Racing RE30 wheels wrapped with Hankook Ventus C51 race rubber in a 285/35R18 offering. To stop quicker and later, Peter upgraded the brake system as well. AP Racing 6-piston calipers put the squeeze on Ferodo brake pads up front, while 4-piston units work in the rear. Goodridge stainless-braided lines ensure quick response and superior feel to the driver for improved brake modulation. 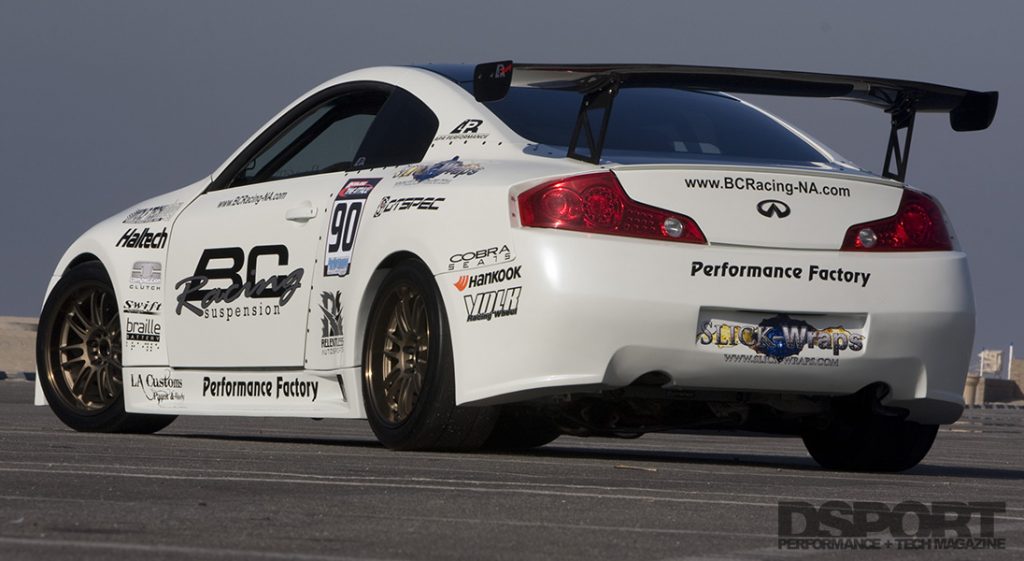 Now prepared to battle on the track, Peter looks forward to the 2009 Redline Time Attack season. With Scott Bush at the wheel of this lighter and more powerful G35, the car now poses a genuine threat in the Unlimited class. By focusing on only the Unlimited class for the 2009 season, pre-race preparation is now easier. Keep an eye out for this hard-charging G35 at 2009 Redline Time Attack events across the country.