The JZA80 Toyota Supra is arguably the best supercar to ever come out of Japan. Even GT-R owners have to recognize that the 2JZ powerplant offers phenomenal performance and reliability. We’ve all heard the stories of the truly psychotic Supra owners that are making over 800 horsepower at the wheels with completely stock long blocks. Many of us have also witnessed the dragstrip potential of these engines in the likes of the Bullish Solaras and the Supras of Paul Efantis and Vinny Ten. Given the impressive achievements of the Toyota 2JZ engine, we weren’t too surprised to hear that SP Engineering had swapped a 2JZ into a GS400. However, SP Engineering definitely got our attention when they faxed over the dyno sheet. The dyno said it all. Over 850 horsepower at the wheels. For those not too good at math, this figure represents well over three times the output of the original 4.0-liter V8 (it generated about 260 horsepower at the wheels). Now that’s an accomplishment. Text & Photos by Michael Ferrara 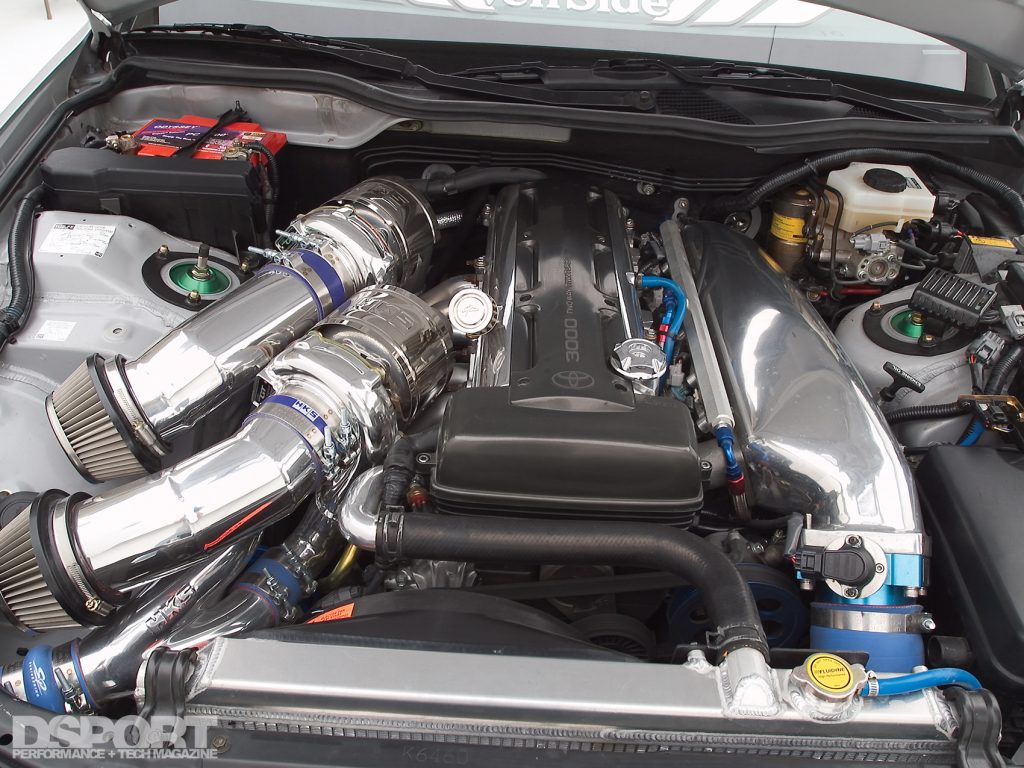 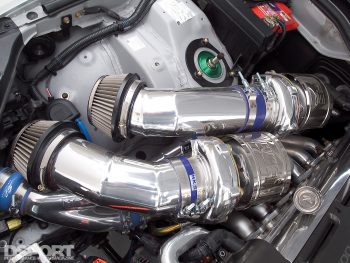 We’ve seen high-performance 2JZ engines in both single and twin-turbo configuration. While single turbo systems offer a lower cost and a higher degree of simplicity, there is something about the visual impact of a top-mounted, twin- turbo system that always gets our attention. On this GS400, our attention was definitely peaked as the engine was outfitted with some of HKS’s best offerings. A pair of GT-Series ball-bearing 3037S turbochargers bolt to the HKS stainless-steel tubular exhaust manifolds. These manifolds are also home to a pair of GT-series HKS high performance wastegates. These wastegates are teamed with an HKS EVC electronic boost controller to ensure that the boost pressure never exceeds the desired level. 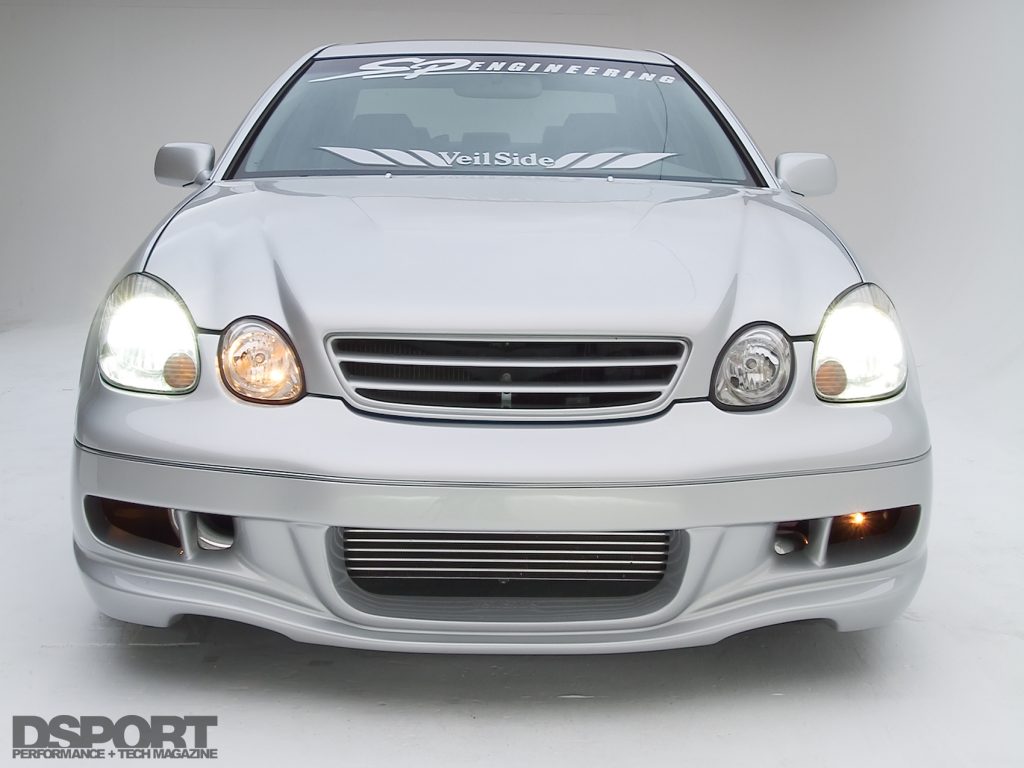 The pressurized air from the compressors is directed to a Blitz front mount intercooler before reaching the massive VeilSide surge tank and throttle body. Once past the intake manifold, a Portflow reworked cylinder head and HKS 272 camshafts control the Ferrea valvetrain that regulates the flow of air and fuel into the cylinders. 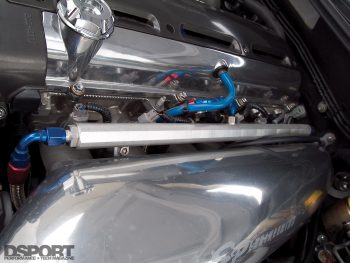 Speaking of fuel, supplying enough gasoline to feed an 850 horsepower engine is no easy task. A pair of HKS 20B in-tank fuel pumps are set up to feed -6AN lines that supply the HKS dual-inlet fuel rail. The fuel rail in turn has a constant reserve of fuel for the six Blitz 1000cc/min injectors. These injectors take their orders from an HKS FCON V-pro engine management system. The HKS FCON V-pro also triggers the HKS Twin Power ignition that energizes the individual coils for each NGK spark plug. As for the short block, SP Engineering opted for a simple and proven combination. A set of JE Pistons and Carrillo rods transfer the power to the stock crankshaft. The crankshaft has its power regulated by an OS Giken Quad-disc clutch before the 6-speed Supra transmission. The swap required only a modified SP Engineering driveshaft to have the 6-speed singing. 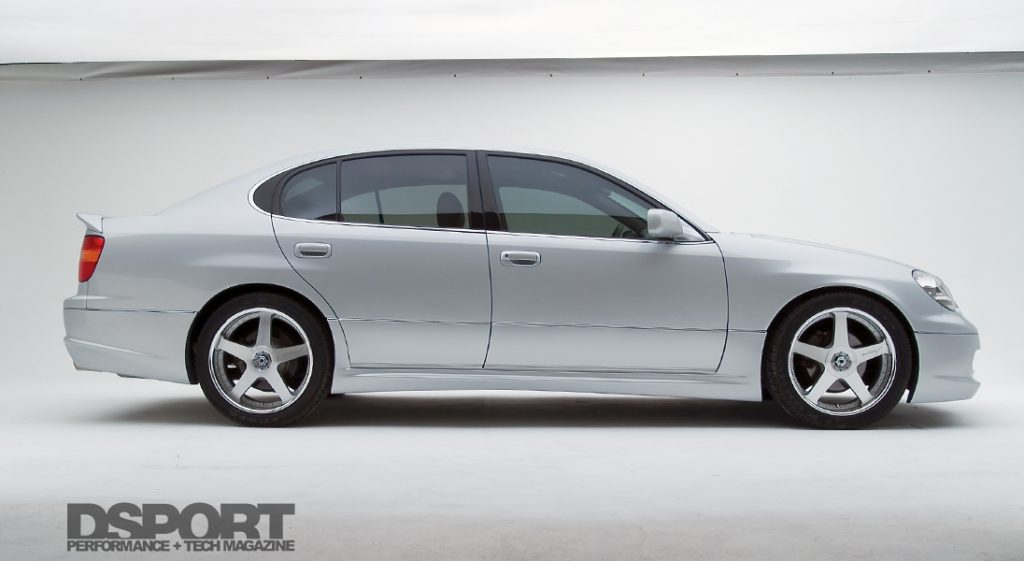 A Touch Too Much?

Some people might be saying what are you going to do with 850 horsepower in a GS400? Our answer is simple…use it. Considering that the GS400 with a 2JZ is just 500 pounds heavier than a Supra, we wouldn’t be surprised to see this car rocket to ten second blasts in the quarter mile with decent traction. As for top speed, only gearing and the size of the drivers gonads would set the limit for this Lexus. 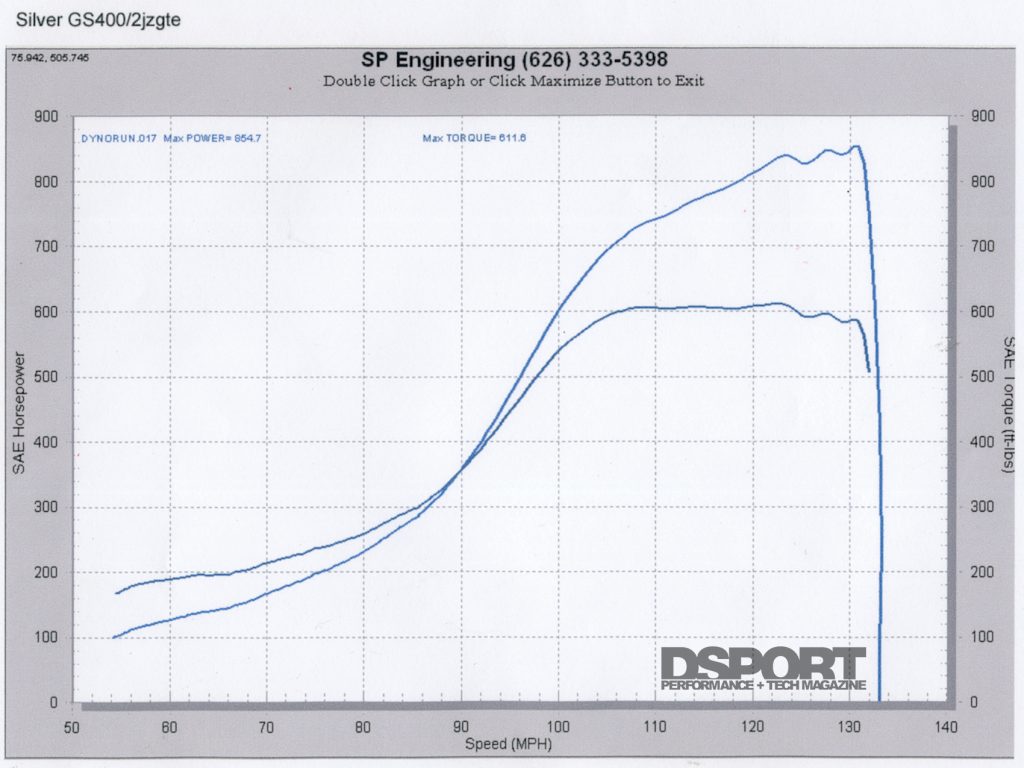