You are at:Home»The Cars»Features»Building A World Record Holding EVO X

Diving head first into a new vehicle platform poses a host of new challenges. When that platform has a mixed platter of good and bad stories to its credit in the first few model years, it tends to be even more intimidating and a somewhat risky venture to consider. But to those with a passion for a marque and the perseverance to achieve, no hurdle is too high to get over. 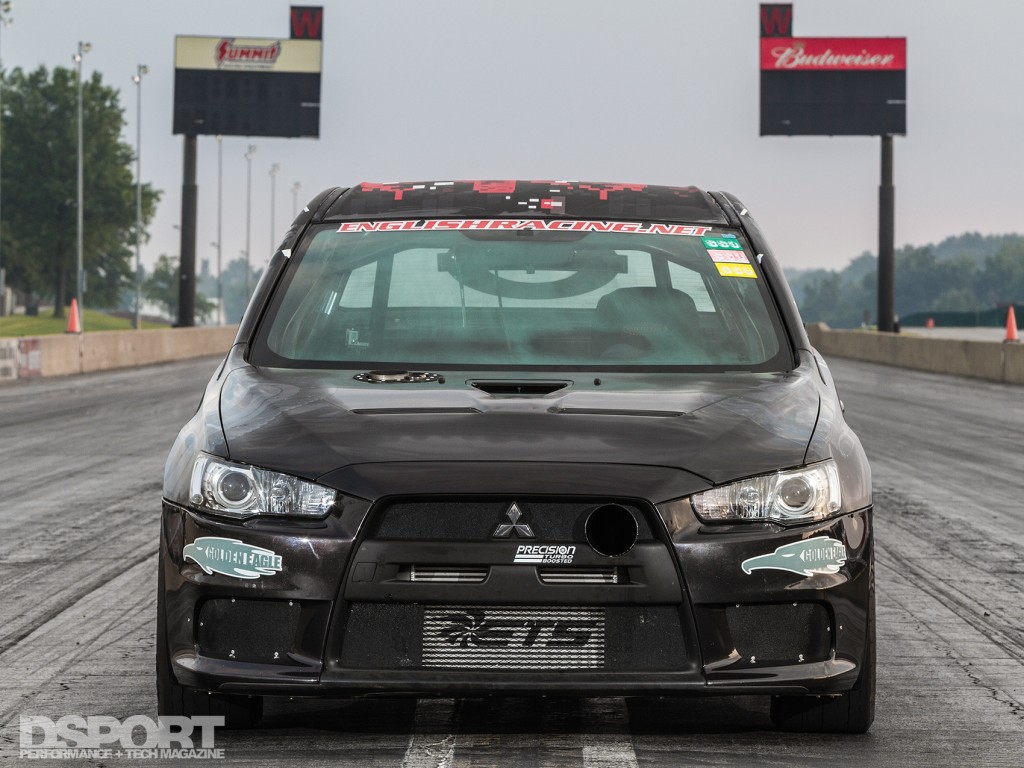 For Extreme Turbo Systems (ETS) and English Racing (ER), the passion for Mitsubishi platforms runs deep, back to the days of the 4G63T-powered DSM chassis. Their long history with Mitsubishi along with a successful partnership developing and racing cars prompted them to take on the challenge of raising the (then) new CZ4A Evolution X chassis and its 4B11T engine to a higher level. However, since this was an all new chassis and engine platform, there were a few unknowns that they would face. To start, the 4B11T’s aluminum construction had some stalwart 4G63T loyalists concerned about its strength compared to its predecessor’s iron composition. Another concern was the reversed engine configuration of the 4B11T. While having the exhaust facing the firewall simplified the exhaust plumbing, it also afforded only a limited amount of space between the engine, exhaust manifold, turbocharger and the firewall. Finally, the EVO X’s high-tech driveline with Super-Active Yaw Control was new and untested for durability. 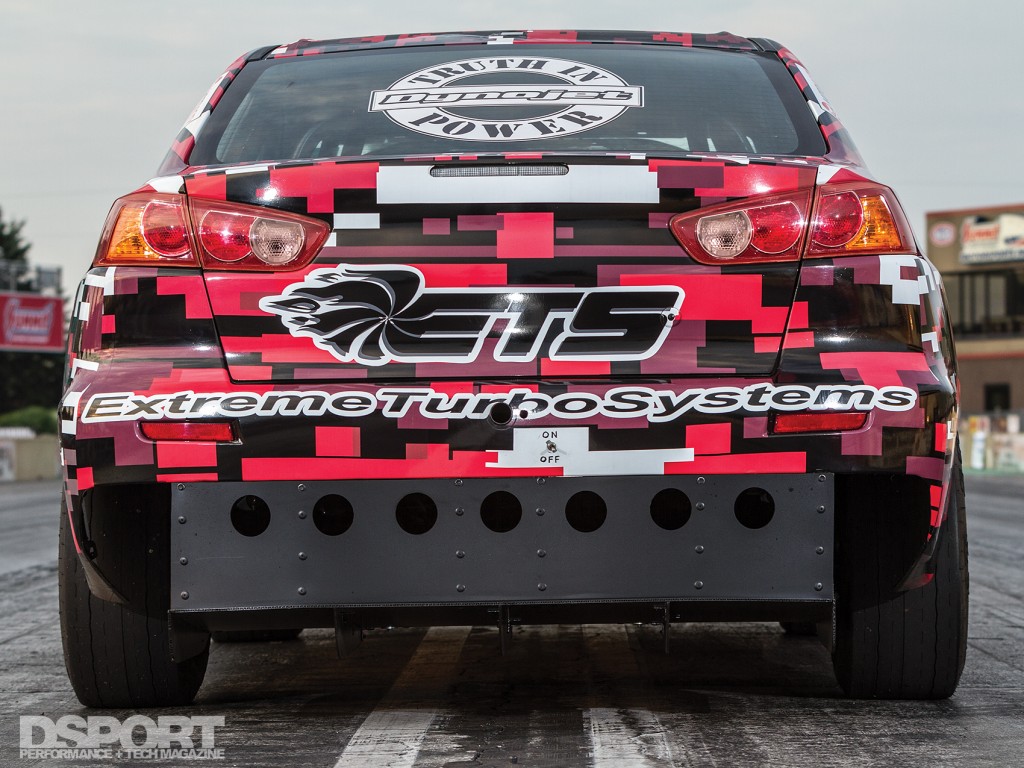 Compared to the venerable Mitsubishi 4G63 engine, which has more than two decades of proven performance, ongoing development and accolades beyond measure, the 4B11T engine has a relatively short resume. Nonetheless, ETS decided to purchase this 2008 EVO X GSR brand new for the purpose of research and development of its performance catalog. As has been the case before, ETS would build and fund the vehicle, while English Racing would handle the tuning and campaigning of the vehicle at the track. In only a year, they set horsepower records with the EVO X. Shortly after, they were the first to break the nine-second barrier on August 11, 2010 with Lucas English behind the wheel. 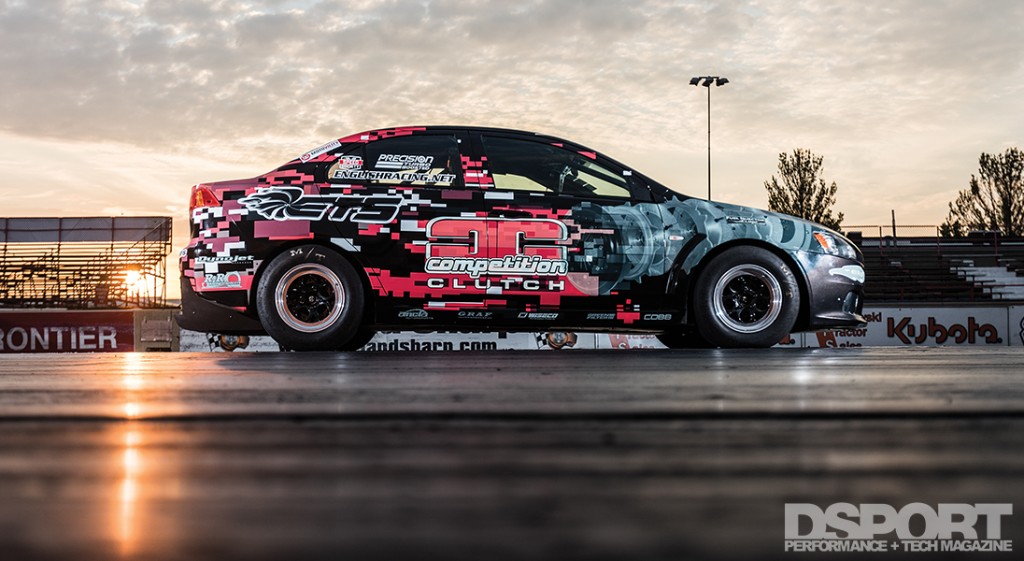 Only Bring the Essentials

Although the EVO X ran a 9.8-second pass at 155 mph in full street trim, it came at a price. Durability and reliability were drastically reduced due to the heavy, factory weight the EVO X toted, resulting in numerous broken driveline components. The next performance upgrade was simply to remove the unnecessary weight from the chassis. The interior was stripped of all nonessential components with the only items remaining being the dash, an English Racing 10-point cage and a Kirkey aluminum racing seat. This was a move that English wished they had made sooner, to reduce the number of repairs they ended up making throughout the development process. Bringing the weight of the EVO X down from its portly factory figure of 3,595 lbs. to an incredibly lean weight of only 2,530 lbs. made the CZ4A an even stronger contender for setting records. 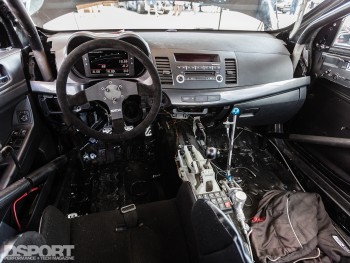 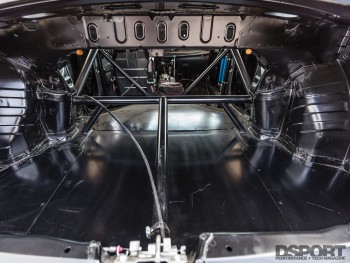 Once the chassis had been put through a massive weight reduction, ETS and ER redirected their focus to the powertrain. According to Lucas English, “Mitsubishi actually over-engineered many of the engine and driveline components to handle two to three times the stock output. Even so, many saw the aluminum blocked 4B11T engine as the underdog. At the time,
aftermarket upgrades and solutions were relatively few and the aluminum block just didn’t seem as stout as the 4G63T’s solid but heavy iron construction.” Undaunted by the potential shortcomings, the team went to work on the aluminum block. ER installed a set of Golden Eagle Sleeves to provide stronger cylinders for the Wiseco HD pistons and the R&R aluminum connecting rods to reside in. ER then applied its own cylinder head port program to the head before seating the GSC Power Division +1mm oversized valves, springs and titanium retainers. ARP head studs provide the clamping force to crush a Cometic head gasket between the head and block, ensuring a proper seal. 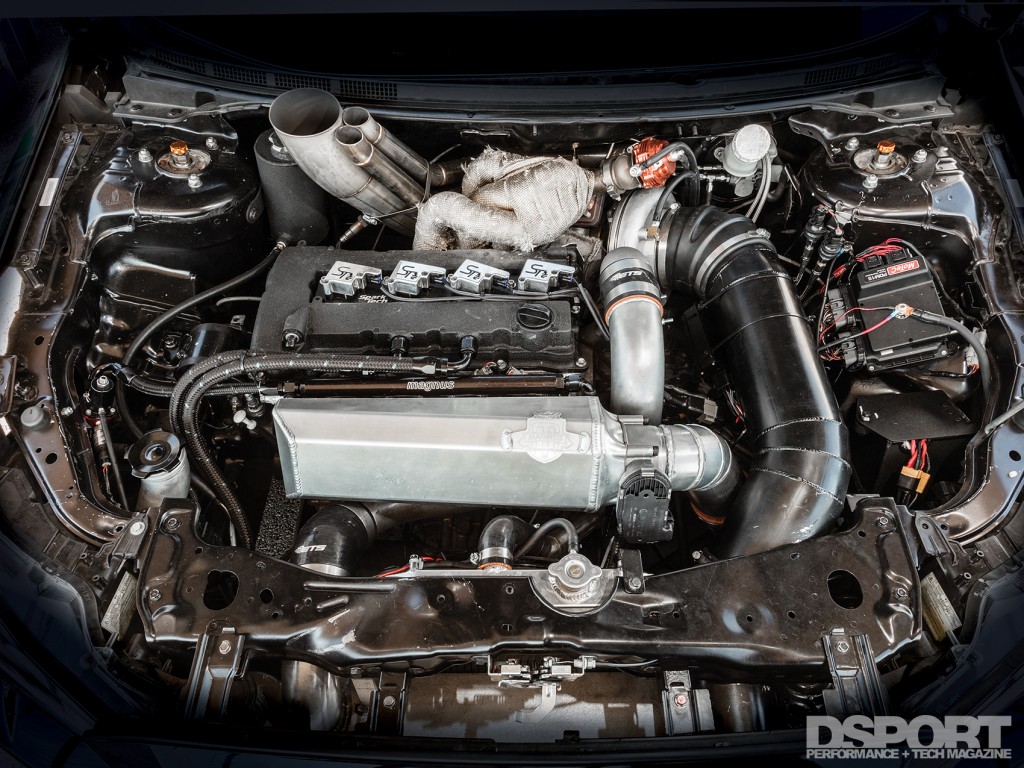 Once the engine build saw completion, attention shifted to boost production and tuning. Since the 4B11T exhaust ports face the firewall, anything larger than a sport turbocharger upgrade would require an offset location. They decided to use an ETS sidewinder manifold to shift the position of a Precision Turbo & Engine 7285 Gen 2 turbocharger to the left side of the engine for forced-induction duties. Custom piping feeds compressed air through an ETS 6-inch front-mount intercooler. Three-inch piping feeds the chilled air charge from the intercooler into a Porsche GT3 82mm throttle body and a Magnus Motorsports intake plenum. As the compressed air charge distributes to the intake ports, a set of Fuel Injector Clinic injectors spray E98 fuel supplied to the rail by way of a pair of Bosch 044 fuel pumps into the incoming air stream. A MoTeC M800 engine management system regulates, monitors and logs the engine and its various components. With the CZ4A chassis spinning the rollers of ER’s Dynojet 424xLC2 Linx dynamometer and the boost dialed up to 56 psi, Lucas English refined the tables of the M800. At its best, the two-liter 4B11T engine put down 1,053 horsepower and 674.6 lb-ft torque to the wheels.

At more than 1,000 horsepower, the 4B11T more than tripled the factory power output of the engine. With more torque than the factory driveline components can handle, several improvements were in order. A Competition Clutch Triple Disc Clutch now transfers torque from the crankshaft to a Graff 5-speed dog engagement gear set. The Graff gear set uses the factory transmission case and simply replaces the stock gears. At the back of the chassis, an EVO IX differential carrier and mechanical LSD replaced the Super Active Yaw Control (S-AYC) rear end and its related pumps and plumbing. This was done because the S-AYC system was intended to help the EVO X negotiate turns more effectively, but could not withstand the increased torque or horsepower that this EVO X produces. Lucas English also devised a prototype manual ACD controller to better regulate the torque split between the front and rear LSDs. 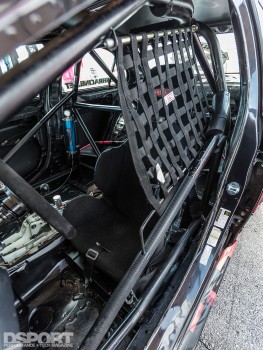 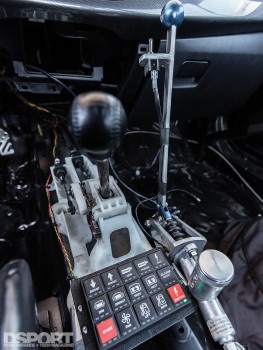 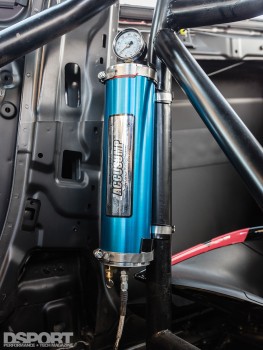 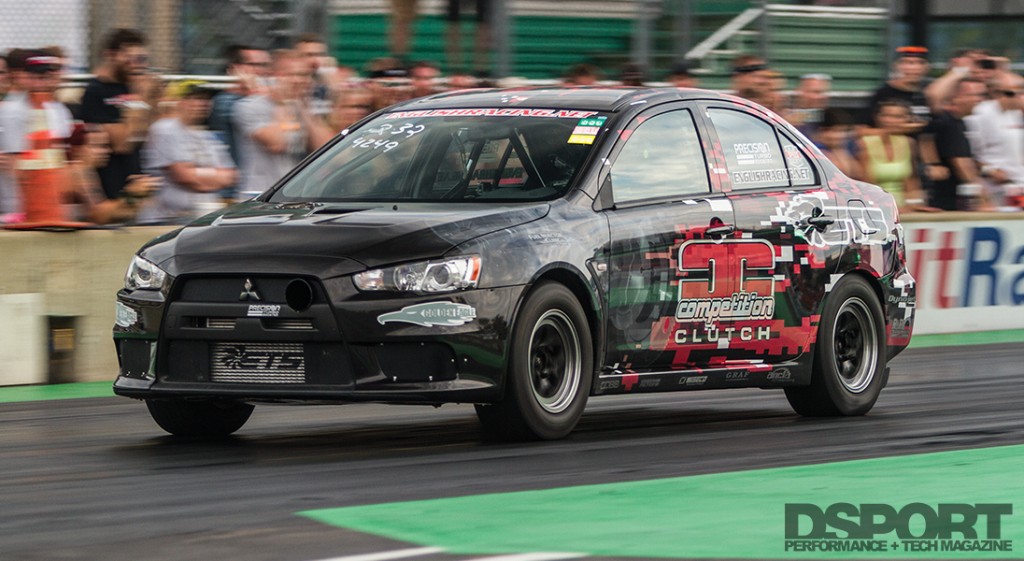 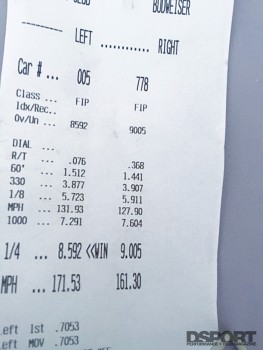 For all the effort and experimentation, along with dyno time and numerous trips to the drag strip, ETS and ER began seeing the fruits of their labor manifest in the form of records. First of all, it’s the most powerful EVO X in the world at 1,053 horsepower. Then it set the world record for fastest EVO X in the half-mile with a 200.35 mph pass at the Shift S3ctor Pikes Peak Airstrip Attack. Finally, on September 27, 2015, at the IFO event at Auto Club Famoso Raceway in Bakersfield, California, Lucas English piloted the EVO X to a world record pass of 8.85 seconds at 172 mph, making this the World’s Quickest and Fastest CZ4A in the books.

Lucas English concluded, “Despite the perception of the 4B11 being inferior to the 4G63, English Racing sees potential in the engine. With a properly designed cylinder head and a sleeved block, there is a chance that the 4B11 could make more power than a 4G63 while being lighter. English Racing prefers to show what it has accomplished, not what is conceptual or what we have planned. So keep a watchful eye out for this car, as we’re far from done with it yet.” Prepared to forage further into the EVO X unknown, ETS and ER venture further into uncharted territory in the quest for CZ4A glory. 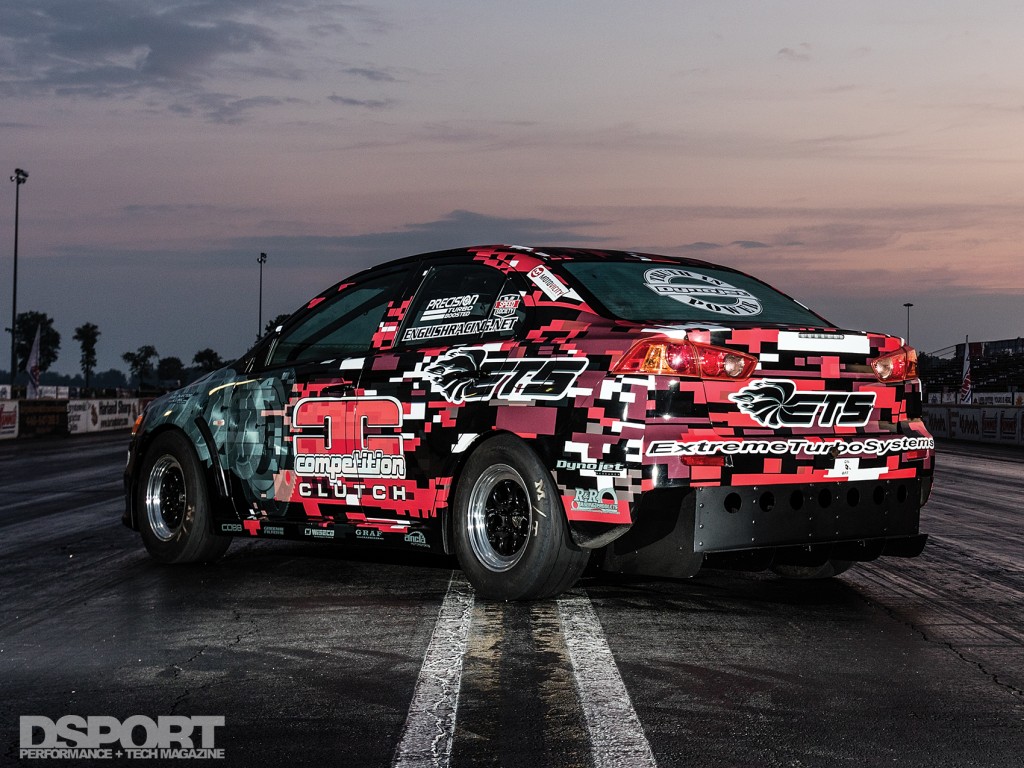