Champions inspire champions. In 2008, a 13 year-old Singaporean swimmer named Joseph Schooling was training at his local country club when he met his idol, American Olympian Michael Phelps. Phelps was already a legend at that point, with 16 Olympic medals to his credit. The awestruck Schooling never dreamed that he would meet, much less defeat Phelps. But at the 2016 Olympic Games in Rio, he not only beat his idol, he won the gold medal in the 100-meter butterfly. 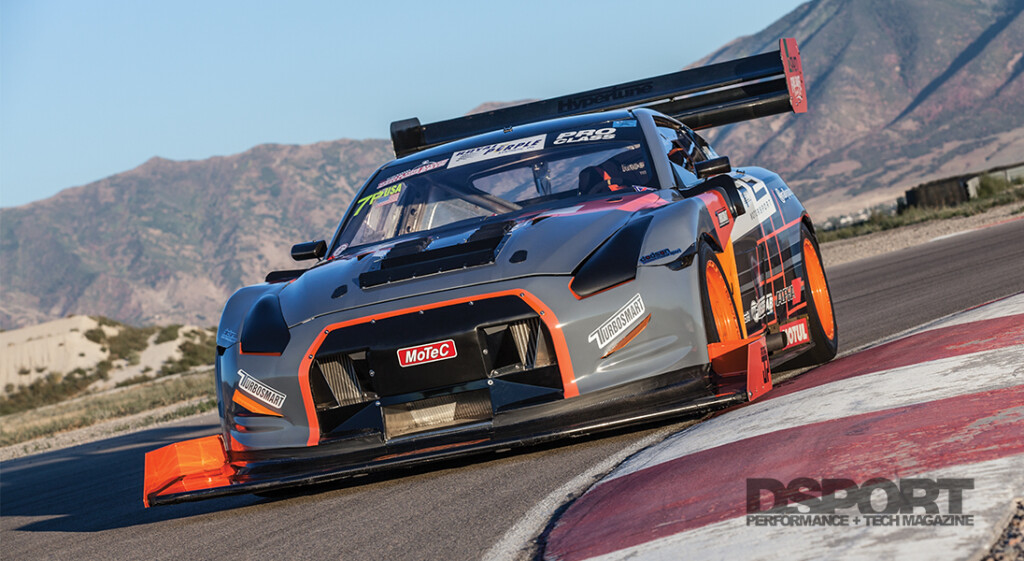 In Awe of Number One

This sort of inspiration sometimes elicits uncommon motivation and drive to be the best. For Cole Powelson, a lasting impression was made when he attended the one and only exhibition round of the All Japan Grand Touring Championship (JGTC) in America, the 2004 GT LIVE USA event. He had already been a fan of imports and loved rally racing at that point, but seeing the JGTC (now SuperGT) racecars running laps around the Auto Club Speedway swayed his interest toward road courses. He also met Nobuteru “NOB” Taniguchi at GT LIVE, a Japanese driver with a fanbase on both sides of the Pacific. Watching Japan’s top tier racing and meeting an iconic driver motivated Powelson to pursue road racing.

Powelson attended technical school right after his high school graduation and within two years became a Porsche tech at a local dealership. After only three years, he added serving on race teams to his resume. He crewed for the Synergy IMSA GT3 team, Magnus Racing in Grand Am and Corsa Motorsport in ALMS. Throughout this time, he constantly sought ways to better his skills and in turn add value to those he worked with.

Powelson poured his knowledge and earnings into his road course passion, racing karts, bikes and cars during his free time. Although he never attended a racing school, he learned and observed the techniques of faster drivers, then put in a lot of seat time to practice his craft. His interest in vehicle dynamics and chassis engineering led him to return to school to become a mechanical engineer. During this time, he was given the chance to manage a race shop called Raceco. Not long after, he left school to focus on his work, honing his driving skills along with coaching drivers and analyzing data. His motivation was to add value by helping make the drivers and the company better. 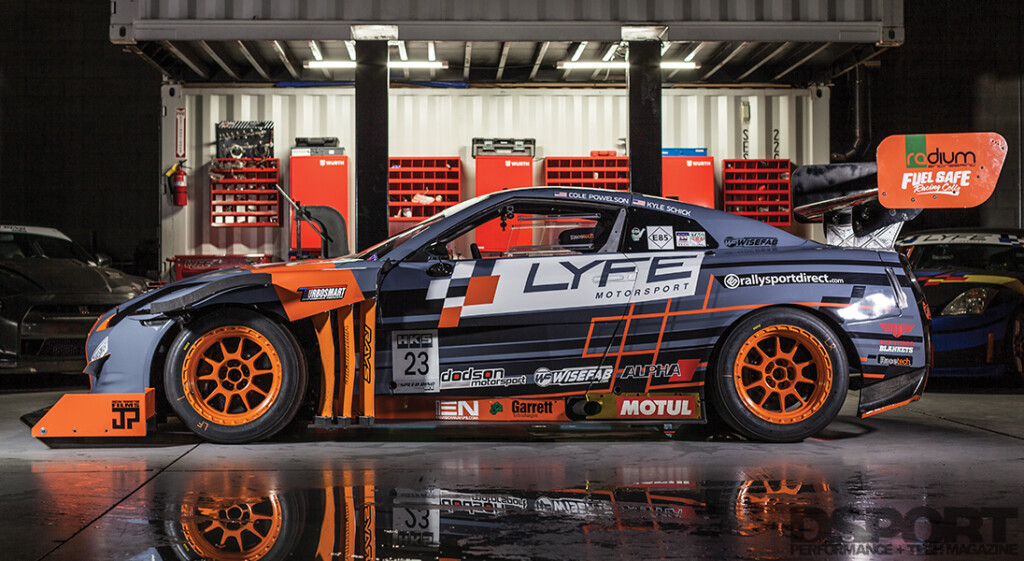 Powelson’s passion and dedication gave way to a big step in his life, establishing his own fabrication and engineering shop, and running it his own way. He founded LYFE Motorsport in 2014 with the support and trust of his partners Doug Nephew and Kyle Schick. Schick presented Powelson a grand project concept that captured his attention immediately. Schick’s ambitions for the build included professional aerodynamics, a carbon-fiber body and over 1,000 horsepower to the wheels. The goal was to build the quickest Pro/Unlimited Class Nissan R35 GT-R track car in the world, competing at venues across the globe against the planet’s finest machines.

For an over-the-top, unlimited class build, gutting a perfectly functional street GT-R didn’t make much financial sense. LYFE Motorsport already purchased the former Cobb SoCal GT-R, but it was still a relatively heavy racecar and not worth reconstructing to meet their global dominance objectives. Fortunately, they learned that David Hsu of Skunk2 acquired several R35 GT-Rs that never made it to the dealership. These were salvaged from a transport ship that sank in the aftermath of Hurricane Sandy. They purchased one of these GT-Rs to become the foundation of the build. After stripping the chassis down, they discovered a surprisingly sound frame with nominal salt-water damage to the sheet metal. 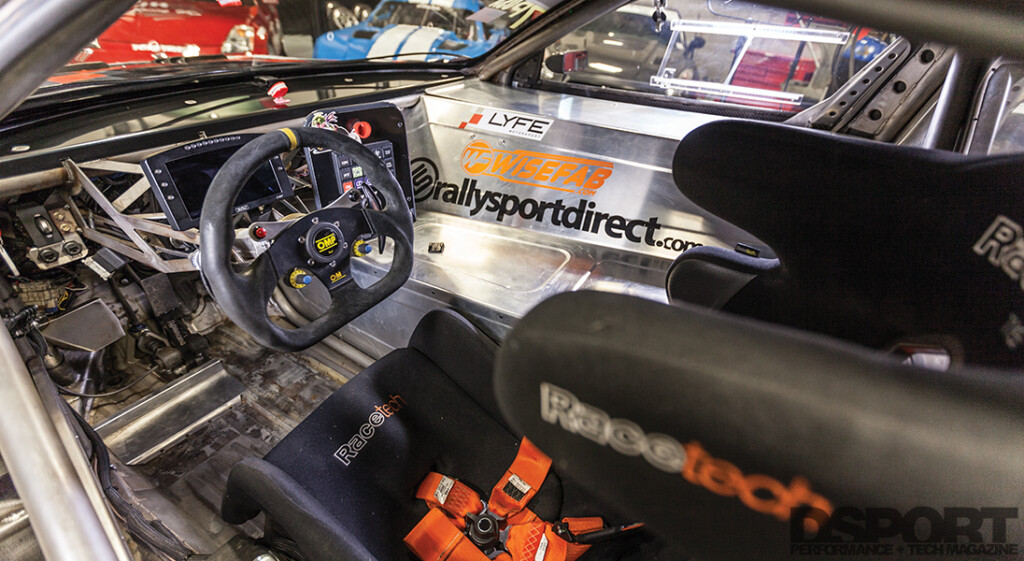 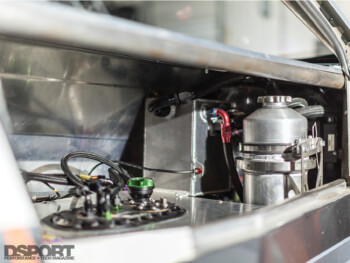 Racing at venues around the world means fulfilling the class and safety requirements of different sanctioning bodies and race promoters. Thus, LYFE Motorsport’s team went to work on the chassis. Starting with class legal removal of non-essential components, the fabrication team then over engineered a roll cage that would satisfy the requirements of any venue they ever planned to visit. Within the confines of the cage, a Racetech race bucket and six-point harness secure the driver behind the wheel. A firewall isolates a compartment occupying the former passenger seat area, which now houses a Fuel Safe fuel cell and the Magnus Motorsports dry sump oil tank. Positioning these components opposite the driver help to centralize weight and focus shifted to aerodynamics. 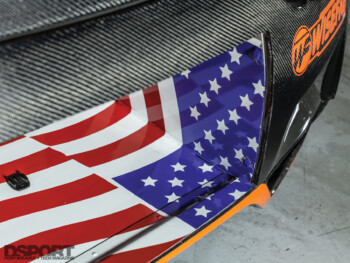 During the deconstruction and preparation of the R35 chassis, Powelson enlisted the help of aerodynamicist Andrew Brilliant to customize the GT-R’s aerodynamics to optimize downforce. Brilliant’s extensive resume includes working on Japanese Super GT cars as well as some of the high-profile time attack body lines that lap the track at the World Time Attack Championship in Australia. Months of design work led to the penning of custom bodylines. While faithful to the GT-R’s original shape (the only original exterior sections are the A-to-C pillar arches) the rest of the panels were massaged and fashioned from carbon fiber to widen the body while reducing weight. A tunnel that starts at the transmission bell housing and terminates between the taillights directs airflow from under the belly of the chassis, reducing turbulence and helping to suck the chassis to the ground. A massive tri-planed wing mounted to billet wing stays bolts directly to the chassis. Collectively, these changes yield tremendous increases in downforce over the tires for improved traction, handling and contact with the pavement.

While aerodynamics and downforce solve part of the handling equation, the suspension and rolling stock complete the solution. A comprehensive Wisefab suspension system made up of adjustable links and arms along with billet aluminum uprights replaces the factory pieces while adding adjustability for more customized alignment settings. Swift springs and Öhlins TTX four-way adjustable dampers suspend the chassis and help the tires maintain contact with the tarmac throughout the course. Tire selection depends on the racing event and class requirements. For the World Time Attack Championship and Pikes Peak International Hill Climb, Yokohama A050 tires mounted on Volk Racing TE37SL wheels provide contact with the pavement. For the Speed Ring Powered by HKS event, CCW wheels mounted with Yokohama racing slicks deliver the adhesion to stay planted to Auto Club Speedway’s Roval track configuration. 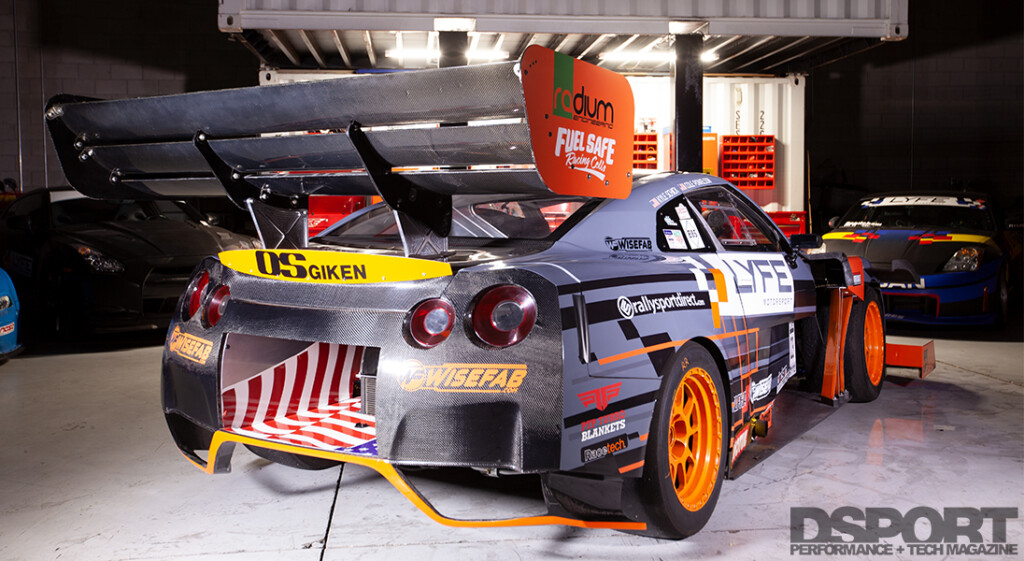 Few would argue that the merits of increasing downforce aren’t worth having, but it does come at a cost. To counter the aerodynamic drag that accompanies increases to downforce, more horsepower is essential. Although the chassis survived a dip in the ocean, the powertrain did not fare as well, warranting replacement. Thankfully, LYFE Motorsport had a spare VR38DETT engine and GR6 transmission that came with the Cobb SoCal GT-R. These would serve as the foundation for this GT-R’s drivetrain.

Like many in the GT-R community, Powelson elected to leave the VR38DETT cylinder bores untouched, while increasing displacement by way of increasing the stroke. Using a LYFE Motorsport 96mm stroker crankshaft, the 7.6mm longer stroke increased the displacement to 4,126.4cc, a gain of 8.6-percent over stock. The crank joins the 9.0-to-1 compression CP Pistons by way of Carrillo forged steel connecting rods. To more efficiently fill the cylinders, LYFE Motorsport applied its CNC port program to the cylinder heads before reinstalling the factory valves sprung by Kelford Cams’ valve springs and retainers. Kelford camshafts take their place atop each of the heads to provide increased lift and longer duration to the valvetrain. 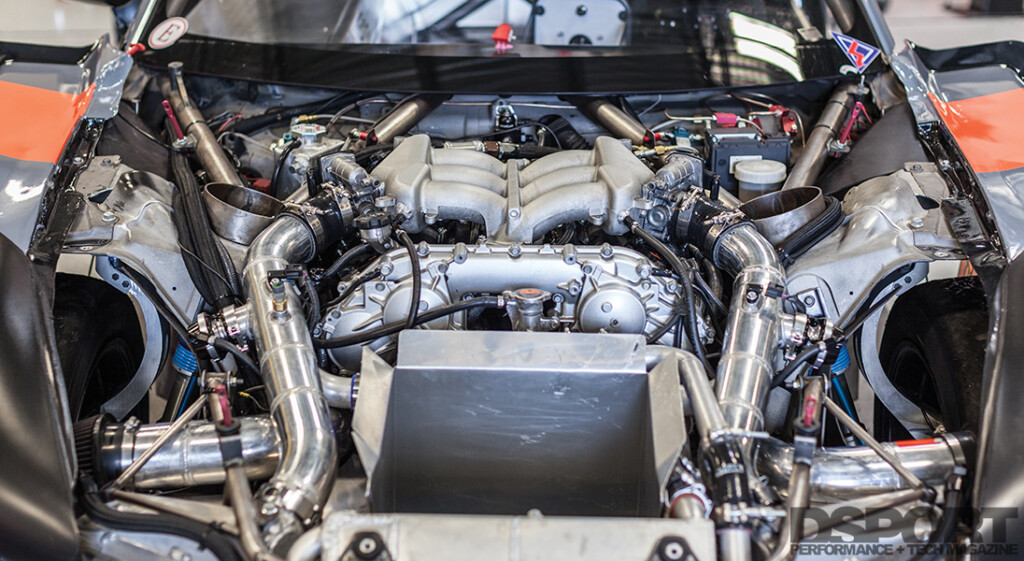 Once the VR38 was assembled, pressurizing its cylinders became the next focus of the build. Unlike the 2,000-plus horsepower GT-Rs competing in quarter mile, half mile and mile long races around the world, this R35 needed to be responsive and handle turns while clearing straightaways in short order. Powelson turned to ALPHA Performance for a solution. He chose the ALPHA 10X turbo upgrade, which included ALPHA exhaust manifolds and a pair of Garrett GTX3076R turbochargers. Hung from the factory location under the engine, the turbochargers pressurize ambient air and force it through custom intercooler piping to a pair of customized Bell air-to-air intercoolers. From the intercoolers, the chilled air charge travels through the factory throttle bodies and manifold for distribution to the intake ports. A six pack of Siemens VDO 2,400cc/min injectors spray atomized VP Racing E85 into the combustion chambers with the incoming air. Using a MoTeC M150 engine management system to regulate the fuel flow and ignition timing, Phil Laird and Cody Phillips calibrated the VR38 engine to a peak boost pressure of 32 psi. Peak power figures checked in at 1,017 horsepower and 511 lb-ft torque as measured on a Dynojet AWD dynamometer.

Producing more than twice the factory horsepower would overtax most drivelines. The Getrag GR6 transaxle in the GT-R is no different. The dual clutch transmission usually handles modest increases over the factory output. Beyond that, parts start breaking. To handle the rigors of unlimited-class time attack competition, the transmission received a complete upgrade composed of Dodson Motorsport gears and the top tier Promax clutch pack to reliably convert torque from the engine into motion. While the factory driveline components get the front wheels turning, an OS Giken Super Lock 1.5-way LSD delivers torque between the rear wheels. 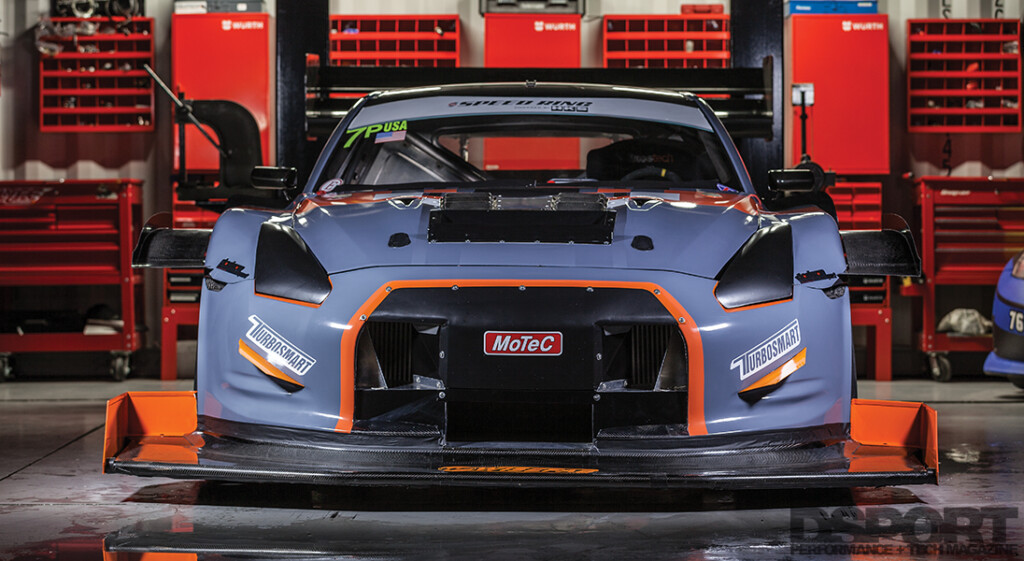 Off to the Races

Since Powelson and Schick had envisioned international competition for this GT-R, the World Time Attack Challenge (WTAC) in Australia was their first targeted battlefield. At the 2014 WTAC, HKS took the top spot, recording a best lap time of 1:30.8380 in the R35 GT-R Class with Taniguchi at the wheel. This became the team and the time they wanted to beat. Although WTAC did not have a one-make R35 GT-R class in 2015, LYFE Motorsport made the hop across the pond to race on the world stage in Sydney. With Powelson at the wheel, the GT-R they dubbed “Sydney” came in seventh place in the Pro Class with a best lap time of 1:32.4050. This was short of their objective since HKS was 1.567 seconds quicker around the track and continued to hold the title of “World’s quickest time attack GT-R”.

The Chance of a Lyfetime 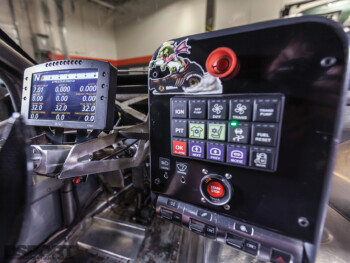 When the Speed Ring powered by HKS event was announced for 2016, Powelson and Schick could not resist competing at Auto Club Speedway in Fontana, California. Not only was HKS bringing its GT1000+ GT-R and Taniguchi to compete, they put up a $20,000 cash bounty for anyone who could best Taniguchi’s lap time on track. This was the chance they’d been waiting for, the chance to take on the number one time attack GT-R in the world. Throughout the day, the battle between them was fierce, as the gap in lap times got smaller with each session. A stroke of bad luck almost cost them the opportunity to compete when a tire blowout at 140 MPH coming off the oval almost sidelined them for the rest of the race. Fortunately, pro driver Michael Essa offered them a spare set of Yokohama slick tires to put them back into the competition. During the last session, Powelson turned his best lap time of 1:32.534 on unfamiliar tires, beating Taniguchi’s quickest lap of 1:33.386 to take the win in the class as well winning the $20,000 cash prize for running the quickest lap time. For Schick and Powelson, this victory meant, “Mission, accomplished.” 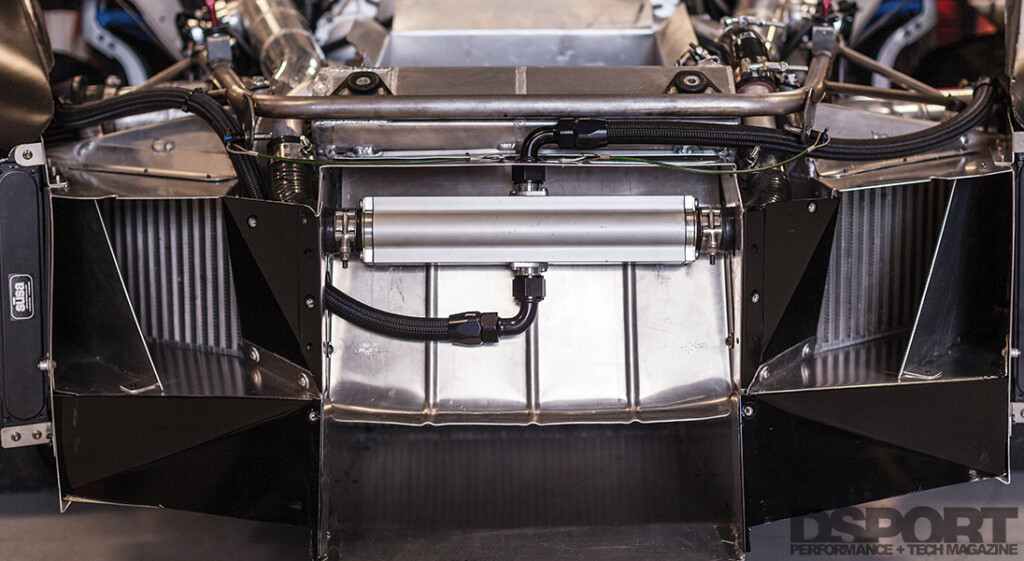 Things have come full circle for Powelson, as he was inspired by Taniguchi at Auto Club Speedway 12 years earlier. His determination and hard work paid off as he can now lay claim to the title of “World’s quickest time attack GT-R” having beaten a hero and inspiration. Powelson concluded, “This accomplishment has been my dream since I set foot at Auto Club Speedway in 2004. It has been a challenging climb building up myself, my business and this car to accomplish what we have, and I could not have done so without the support of Doug and Kyle. We set out to be the best and did it. Now our objective is to never lose to another R35 GT-R, ever.” With a new directive in place, Powelson has his work cut out for himself. But competing in the company of his inspirations makes the effort more than worthwhile.