THE HONDA NSX SUPERCAR DESIGN ENDURED PRODUCTION with few changes over the course of 15 years. Designed at a time when Honda engineers were focused on performance, the NSX featured an all-aluminum unibody, aluminum race-tuned suspension links, a mid-engine layout for balance, a high-specific-output-perliter, variable valve-timing V6 engine and timeless Pininfarina body lines that rarely fail to catch the eye of the casual observer. 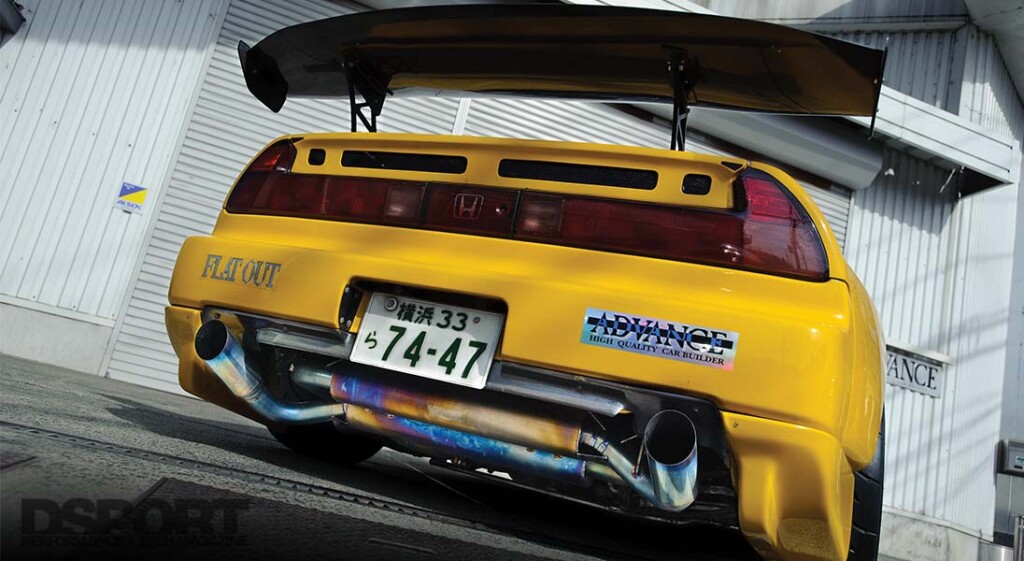 Motorsports teams embraced the NSX immediately and for nearly two decades, countless accolades were captured in a variety of sanctioned competitions ranging from SCCA to Super GT. Famous racing teams like ARTA, Real Time Racing, Raybrig, Takata Dome and Mugen to name a few have successfully campaigned the NSX to the top of the podium. 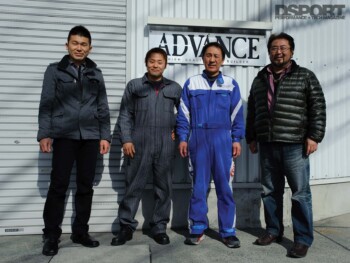 Susumu Shimbori is the owner of ADVANCE Co., LTD. in Yokohama, Japan. He also recognized the potential of the NSX. Shimbomisan founded ADVANCE Co. to improve the NSX’s overall performance. His focus is to extract the maximum enjoyment from the platform whether the car is daily driven or flogged on the racetrack. ADVANCE Co.’s focus takes the NSX’s strengths to a higher level. This includes maximizing the potential of the engine, suspension and the aerodynamics.

INDIVIDUAL THROTTLE BODIES: ARE SIX BETTER THAN ONE?

Single throttle body plenums versus individual throttle bodies (ITB). Do either hold an advantage? Manufacturers have designed engines that feature both methods of air delivery. A vast majority of vehicles rely on a single throttle body and an intake manifold with plenum to distribute the air to the intake ports and combustion chambers. Others (usually performance engine applications) choose to design intakes that incorporate ITBs for each intake runner. Why would this be better? 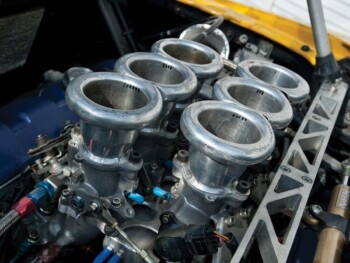 The reason that most choose ITBs is to even out the volume of air reaching each of the intake ports and cylinders. When a single throttle body intake manifold delivers air, the cylinders furthest from the throttle body tend to receive less air volume, resulting in air/fuel mixtures that are uneven, hurting the performance of the engine. Is there a drawback? The added complexity and expense of ITBs has most enthusiasts shying away from them. For big-boost, peak-horsepower applications, vehicles factory equipped with ITBs sometimes get replaced by a single larger throttle body and an intake manifold with tuned-length runners and a larger plenum. This compromise accommodates the increased air volume needed to support significant horsepower increases while the larger plenum and equal length runners help to equalize the volume of air being delivered. This is often the case for forced-induction applications. For normally-aspirated applications, the benefits of ITBs sometimes make the complexity worthwhile compared to relying on a single throttle body and an intake manifold. 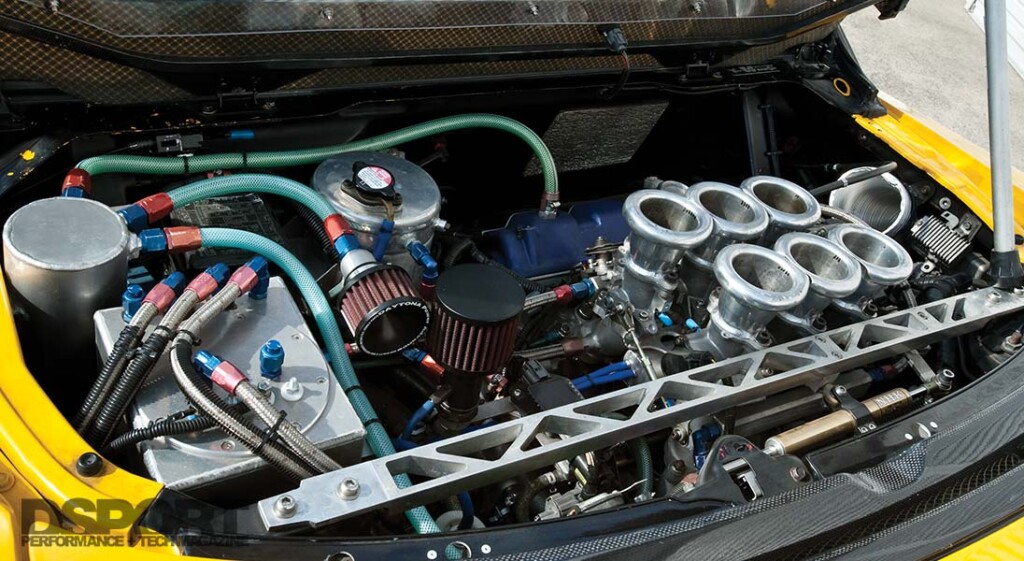 While the specific output of the C30A and C32B VTEC engines that equipped the NSX was among the highest in the world, power adders have taken the limelight as the solution for even greater horsepower production. However, a potential pitfall of supercharging or turbocharging the naturally-aspirated NSX is compromised reliability. This engine was designed to be naturally aspirated and Shimbori decided to make the most of the engine without forced induction. To maximize the potential of the engine, higher-flowing C32B cylinder heads replaced the C30A heads. Higher lift and longer duration TODA Racing camshafts help to maximize the airflow in and out of the cylinders. An ADVANCE individual throttle body system replaced the intake plenum to deliver air to the combustion chambers.

To complement the increased intake efficiency, the restrictive factory exhaust got scrapped in favor of ADVANCE Co.’s FLAT OUT exhaust system. Composed of stainless-steel headers, high-flow catalytic converters and a titanium exhaust, the FLAT OUT system enables the higher-flowing C30A engine to breathe more easily, produce more power and sound as aggressive as it performs. Dyno testing verified the gains for the ADVANCEC30A/C32B hybrid engine. Dyno figures checked in at 343 horsepower and 246 lb-ft of torque. Compared to the factory-rated output of 230 wheel horsepower, the 49- percent horsepower improvement is impressive.

Function and form. Wide fenders perform a number of functions in addition to making a car look better. Increasing the width of the body allows for more aggressively offset wheels and even wider tires for increased traction and improved handling. The vents that are styled into wide fenders actually help with aerodynamics and drag. Precious seconds can make the difference between first place and first loser. In competition, air pressure builds up within the wheel wells causing drag and lift, undesirable conditions while racing. The vents in the fenders relieve this pressure and promote improved handling and aerodynamic stability. exhaust, the FLAT OUT system enables the higher-flowing C30A engine to breathe more easily, produce more power and sound as aggressive as it performs. Dyno testing verified the gains for the ADVANCEC30A/C32B hybrid engine. Dynor figures checked in at 343 horsepower and 246 lb-ft of torque. Compared to the factory-rated output of 230 wheel horsepower, the 49- percent horsepower improvement is impressive. 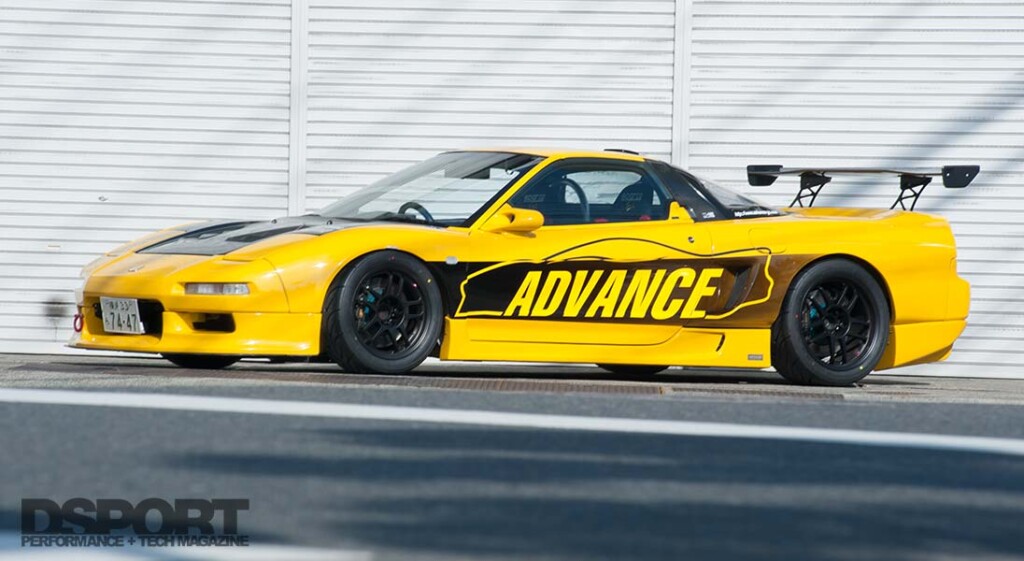 The aluminum, double-wishbone suspension arms and race-bred geometry gives the NSX its renowned handling. But further lowering the center of gravity and stiffening the ride would take handling to another level. Bilstein dampers sprung with Eibach coils suspend the NSX a little lower to the ground to improve handling, especially for circuit racing. Since the circuit entails high speeds and constant speed adjustments, improving the braking system became a must. The wheel wells enjoyed a brake upgrade to AP Racing four-piston calipers at all four corners. The improved brake components upgraded stopping power and dissipate heat more efficiently to combat brake fade.

For several years, Shimbori-san has held a high-speed circuit challenge (HSCC) at Fuji Speedway. A grassroots event, the ADVANCE HSCC was designed specifically for street cars only, challenging drivers and their machines to turn their fastest laps at Fuji. Special recognition goes to the drivers that qualify for the “Under 130 Seconds Members Club”, while highest honors and exclusivity go to those who qualify for the “Under 2 Minutes Members Club”. So how hard is it to earn a spot in the club? For a GT300 Super GT racecar, making laps in the 1’40” range is a record pace. 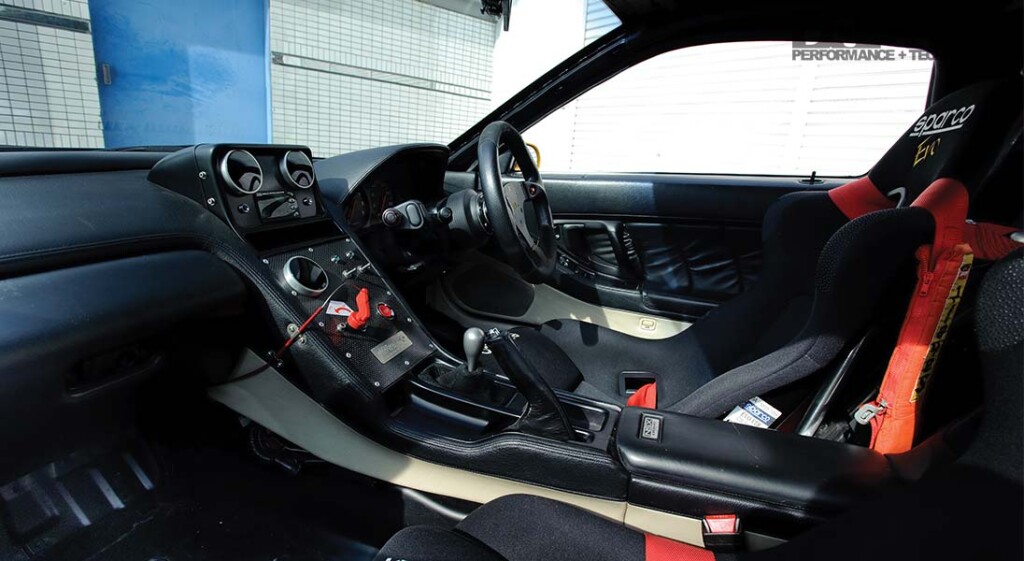 At Fuji Speedway only an hour away from the shop, Shimbori put the NSX to the test. In stock trim, the NSX turned a 2:20 lap time. With the ADVANCE tuning of the engine and suspension, lap times fell to a staggering 1:56. This is a track record for an NSX. Shimbori attributes the improved performance to keeping the tuning simple and effective. Playing on the strengths of the NSX helped to bring forward superior performance from the Honda supercar. Although Honda wrote the closing chapter on the NSX legacy in 2005, ADVANCE continues to carry on the performance heritage putting greater performance in the hands of, enthusiasts and racers.