What does it take to move the spirit and 2,800-pounds too? The roar of 500 horsepower would do the trick. What would move the spirit even more? Doing the work yourself. Corporal Ben Huey’s old Civic was pretty tired, which put him in the market for a new ride. While serving with the White House Communications Agency in Washington DC, this US Marine Corps veteran purchased the S2000 from his friend the moment he saw the car. The sleek lines and the rear-wheel-drive layout were exactly what he wanted. 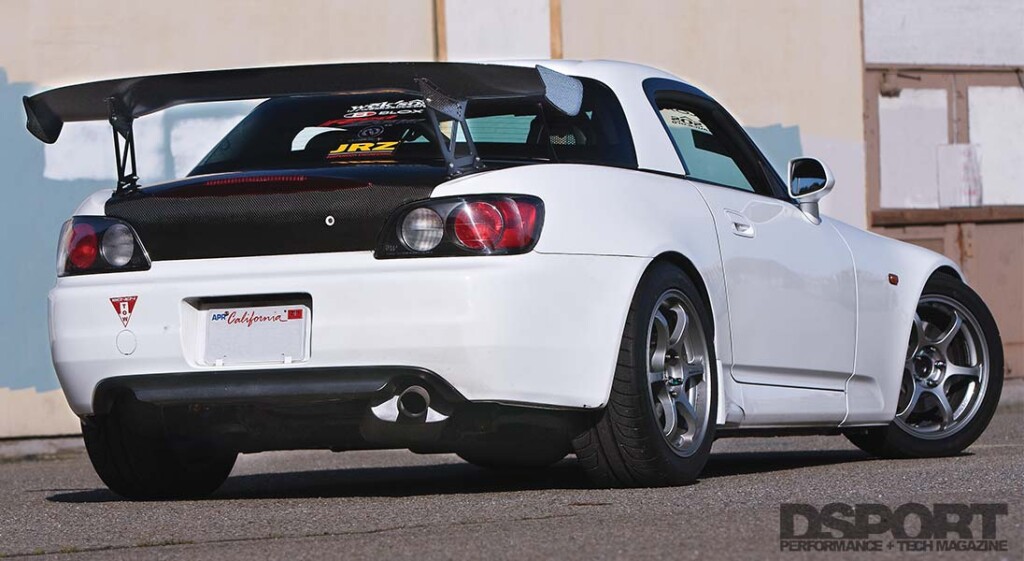 Once back at home in San Francisco, Ben began tinkering with his ride. An intake, exhaust and coilovers did the job for a year, but he soon found that he demanded more of the car than it would deliver. But rejoining civilian life and being a student made spending more on the car tough on the wallet. Ben was determined to get more out of his ride with his limited budget. His tactic? Do some of the work on his own and spend his hard-earned dollars with experts on the more difficult aspects of the build.

The build started by pure coincidence. Driving the car with just simple bolt-ons proved too much for the notoriously-weak factory differential. Ben couldn’t even drive up the hill to his home when the rear end failed. Rarely do builds start with the differential, but in the case of this S2000, a pile of metal shavings that came out of the pumpkin proved that it was the weakest link. Ben sourced a Stage-4 PuddyMod differential as the solution for his build. The Stage-4 employs a factory differential rebuilt with a PuddyMod solid steel pinion sleeve instead of the factory crush collar. PuddyMod indicates that the  solid steel sleeve will not distort or compress under heavy loads improving durability and reliability. PuddyMod also includes reinforced bearing caps and a polished and ring and pinion. A cryo-treated factory Torsen LSD limits the slip in the Puddymod Stage-4 differential. 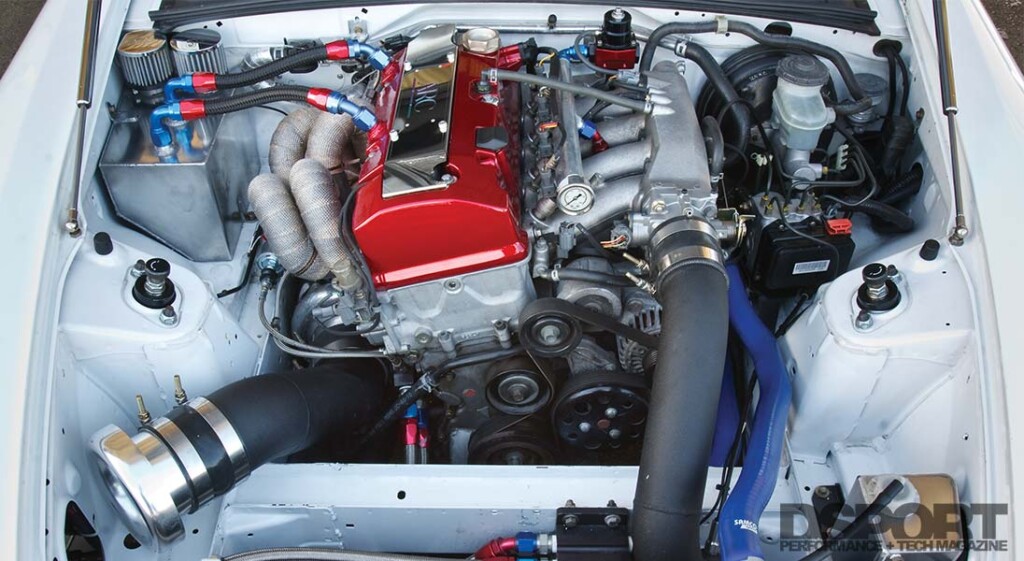 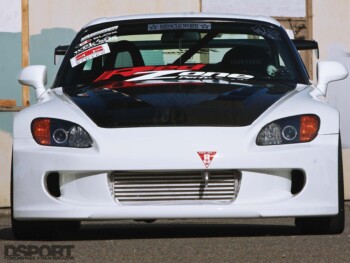 Confidence restored, greater expectations prompted the search for additional performance from the F20C engine. Ben seized the opportunity to benefit from boost. With the help and guidance from Redzone Performance (RP), work began under the hood. Leaving the shortblock unchanged, the cylinder head received Supertech bronze valve guides, dual valve springs and titanium retainers for improved valvetrain reliability. Once assembled, a Cometic MLS head gasket and stronger ARP head studs were installed to secure the head to the block and contain the greater cylinder pressures generated by forced induction.

A Full-Race (FR) turbo system centered on a FR-spec Garrett GT3567R ball-bearing turbocharger harnesses the rapidly expanding exhaust gasses to generate boost pressure before the gasses flow through a FR downpipe and three inch RP exhaust to the atmosphere. On the cool side, the compressor forces the incoming aircharge through custom intercooler piping en route to the Precision Turbo & Engine intercooler with RP custom end tanks. Once chilled, the dense and pressurized air passes through a higher-flowing BLOX Racing Tuner Series cast-aluminum 68mm throttle body on the way to the combustion chambers. 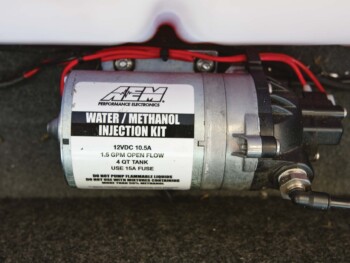 An important criterion for horsepower is fuel octane. However, fuel price increases while availability decreases as higher octane levels are sought. A cost-effective solution to the octane question could be water/methanol injection. A technology that was pioneered in World War II, injecting a 50/50 mixture of distilled water and methanol can effectively raise the octane of the fuel entering the combustion chamber. When the mixture changes from liquid to vapor in the intake tract, heat is pulled from the charge air. This lowers the temperature of the air charge and slows the burn rate which helps to avoid detonation. In turn, higher boost levels and more aggressive ignition timing can be used to extract more power from the engine safely.

In anticipation of occasional track time and significant horsepower output, the fuel system received additional attention. A Walbro intank pump draws fuel from the gas tank and fills a custom surge tank. A MagnaFuel 1,000-horsepower inline fuel pump draws fuel from the surge tank to supply the high-volume 1,000cc/min Delphi fuel injectors. Metering fuel from injectors nearly three-times the factory size requires serious tuning capacity. An AEM Engine Management System replaced the factory ECU to control the injector and spark timing tables. To further cool the intake charge, allow greater boost pressures and tune the ignition timing more aggressively, an AEM water/methanol system was installed as well. After strapping the S2000 to a Dynojet 224x chassis dynamometer, the tuning process began. With Brandon Budack on the laptop, the boost was dialed up and the rollers were spinning. At a peak boost level of 19 psi, the S2000 generated 492 horsepower and 300 lb-ft torque to the wheels. 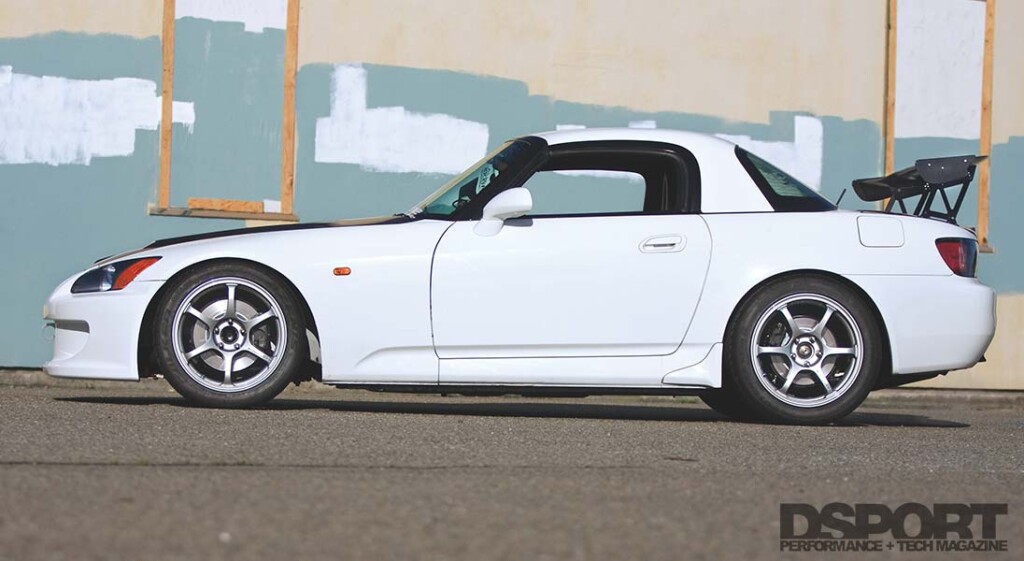 Trimmed For The Track

Since the S2000 would serve on both the street and circuit, suspension improvements were a must. JRZ Suspension Engineering single-adjustable front dampers and double-adjustable rear dampers work with Hyperco springs to suspend the AP1 chassis. Tying in the subframe and correcting for roll center, RP made modifications to both the front and rear sub frames and added Wicked Tuning’s rear bump steer kit. These improvements lend to the S2000’s already respectable handling traits and raise the bar a few notches. 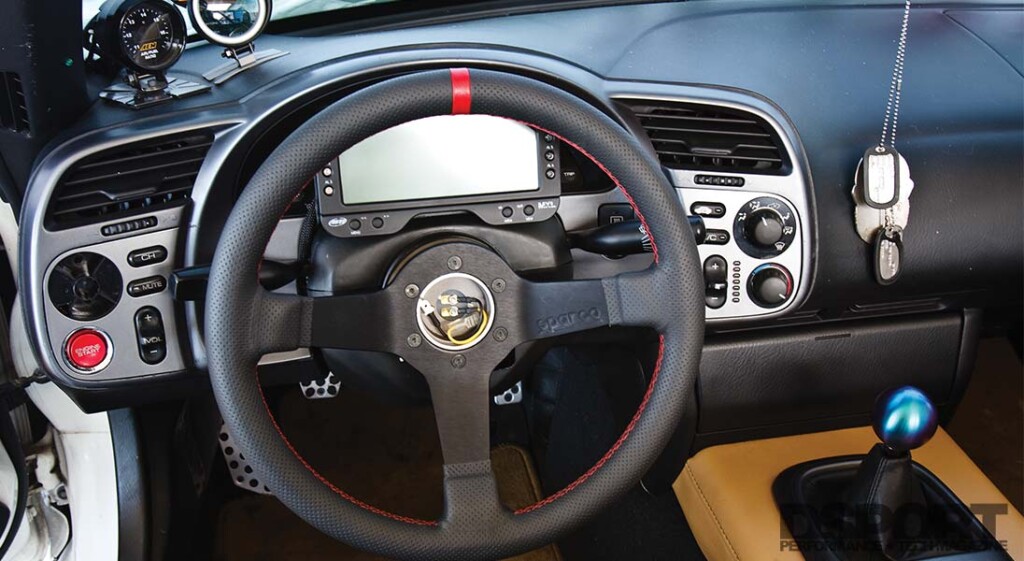 While Ben states that there is always room for improvement, this year’s funds will be spent on tires and track days. After that, he expects to invest more on suspension work and retuning the engine on E85 fuel. He comments, “I set out to build the car as a daily driver with two objectives. One, keep the car functional and two, keep the car clean. With the help of people I met in the industry, I’ve learned volumes about working on cars. I even did the wire tuck (which took a whole week) by myself. Whatever I couldn’t do, I entrusted to the guys that know what they’re doing. Although I was on a budget, it certainly paid to invest with the experts. Since installing the turbo system, I haven’t even been to the track yet. When I can record a 1’56” lap time at Buttonwillow, I will feel a real sense of accomplishment.” Based on the tactics employed by this Marine up to this stage, we expect him to win that battle.