Arguably the most prolific marque of the American-market import performance tuning boom of the ‘90s, Honda’s Civic nameplate has historically been the underdog racer. Its relatively small engine and front-wheel drive configuration couldn’t predict the success it would have on the racetrack. This success was surprising and prolific that race-ready configurations like the Type R were made available to the public after it walked the walk on circuits throughout the globe. European and Japanese markets enjoyed these first CTR variants as early as 1997, but the power-hungry American market would have to wait two decades before a proper Type R-badged Civic reached its shores for public consumption. When that finally happened in 2017, Byron Jonson was one of the first standing in line with money in hand. 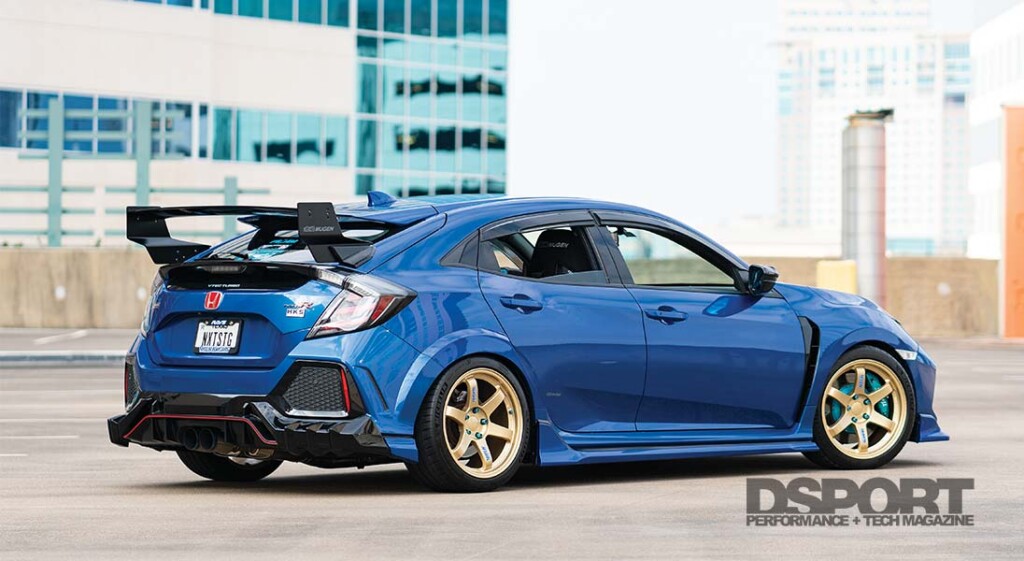 The pinnacle of Civic engineering, the CTR platform leaves the factory with a virtually completed enthusiast wishlist. Powered by a 310-horsepower K20C1 motivator mated to an increasingly rare manual transmission, the Type R variant also features aerodynamic design cues that increase downforce and help keep the car planted. “I liked that it was quick, comfortable and the looks were amazing for a 2017 model,” Jonson explained. “I was surprised the prototype ended up being the actual car that was released.” 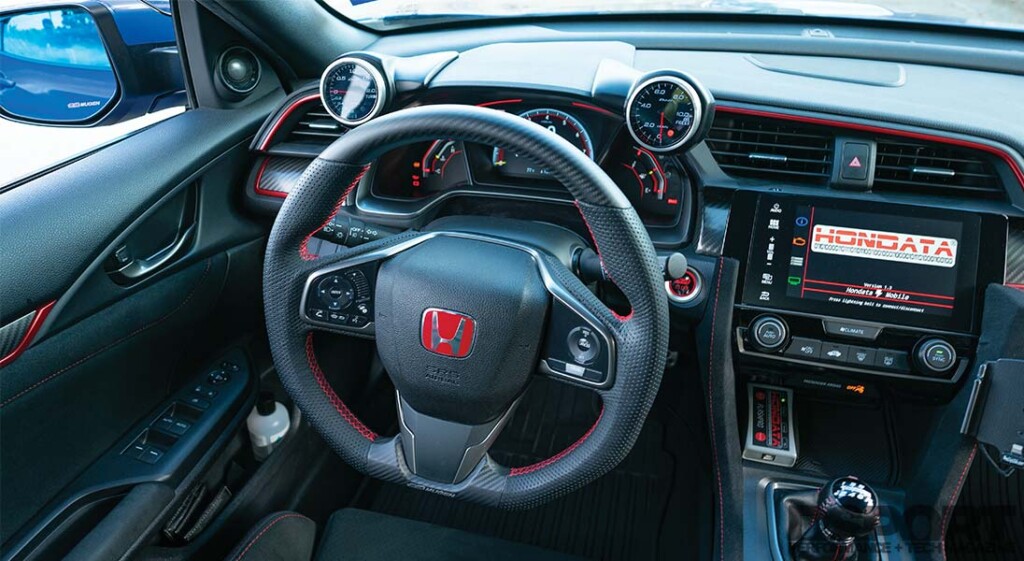 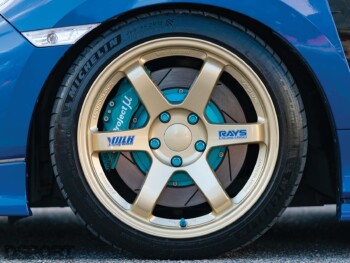 With a mind toward keeping the car stock as homage to the lineage that preceded it, Jonson’s mind soon changed when he learned of an impending scarcity. “I saw the (Volk) TE37 Originals were going to be discontinued, so I bought a set of those with new tires and upgraded the suspension and it went downhill from there.” The 18×10-in configuration of the Top Secret Gold-hued wheels wearing 265/35-18 Michelin Pilot Sport 4S tires offered a wider footprint and more sidewall than the factory units, providing better dry grip and an increased level in rim protection from worn and uneven street surfaces. To better match the look of the new, meatier rolling stock Jonson added in a set of Eibach Pro-Kit suspension springs. 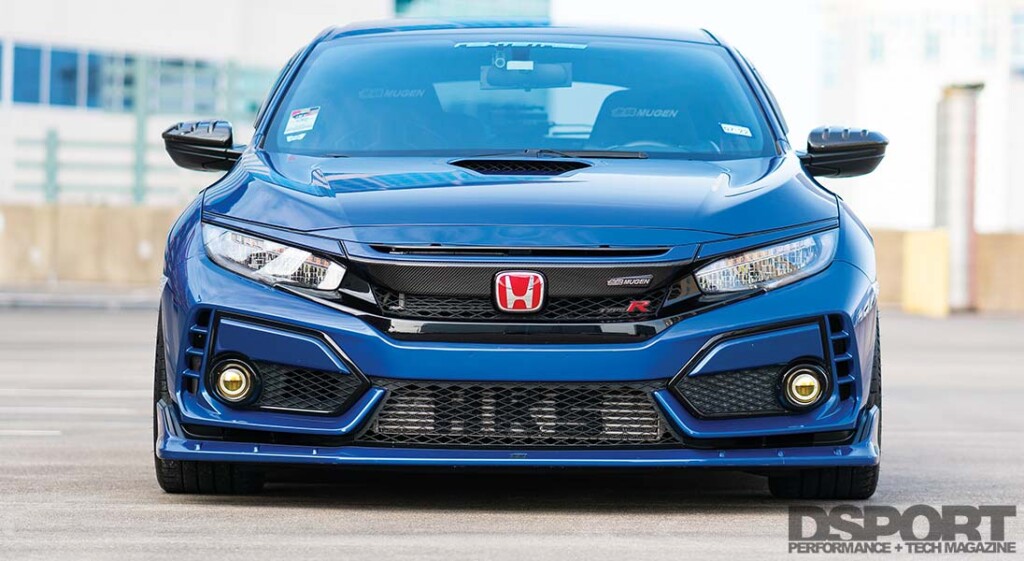 To complement the upgraded wheel and tire combinations, the Civic’s stopping power was also given the upgrade with a set of Project Mu calipers, rotors and brake pads in the front; the rear configuration stayed factory-fresh save the addition of a set of Hawk brake pads. The fifth-spring flex was addressed with a J’s Racing strut tower bar, accompanied by a host of engine-bay dress-up parts informed by the color palette created by the upgrades under the wheel wells.

Before addressing the increased power wishes, Jonson first supplemented the factory aero and styling efforts with a complete Aegean Blue Metallic color-matched kit from popular Honda tuners Mugen; front lip spoiler, grill and bumper enhancements; side skirts and carbon fiber mirror caps; and the rear diffuser and tailgate and wing spoilers. More difficult to source parts, including those from Honda’s Japan accessory arm, Access, were thrown in the mix to further differentiate Jonson’s vision from the other CTRs reaching American shores and streets. 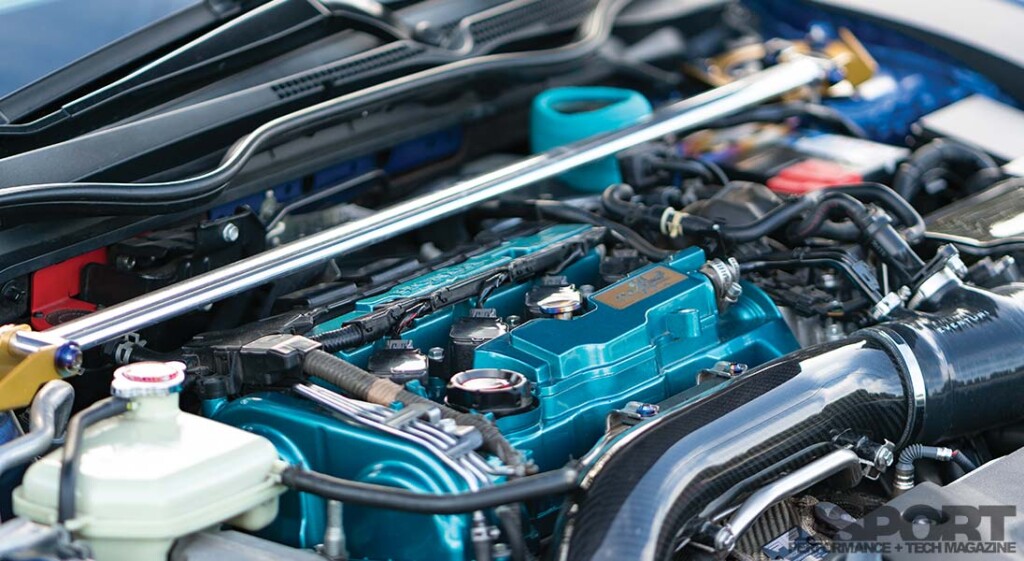 Once the wheels and visual effects were in place, there was nothing left for Jonson to do but to reset the bar for the project build. “The goal was changed to keep it a nice street car that was quick and reliable as my daily driver,” Jonson stated. “I learned from previous projects to research extensively before doing anything, especially since it’s my daily driver and I can’t afford for it to be down.” 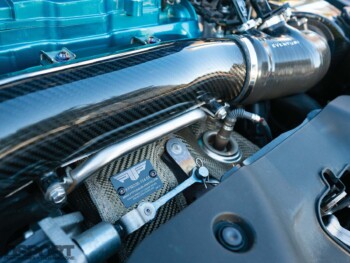 Upgrading the top technology from an OE’s “sport” offering can be a daunting task, particularly because one change or modification could actually reduce performance and efficiency instead of increasing it. On factory forced induction vehicles, one of the surest ways to increase engine efficiency is to replace the factory intake system that’s often “detuned” to help quiet the cabin or adhere to strict (and restrictive) emissions controls required by some localities. To that end Jonson installed an Eventuri Carbon Intake system. The Eventuri box replaces the factory panel filter with a conical filter enclosed in a carbon fiber chamber that separates the higher-temperature engine air from the incoming fresh air stream, while adding a secondary intake port to maximize fresh-air intake. The Eventuri intake feeds the front-mounted HKS intercooler kit through HKS hard pipes; this combination increases cooling efficiency and eliminates the possibility of factory pipe swelling or damage under increased and sustained boost pressures. 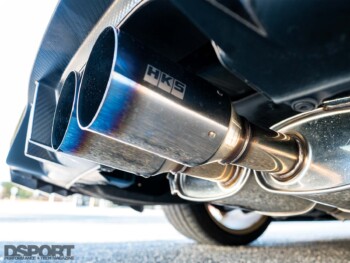 On the combustion end of the equation, specific attention was paid to help keep underhood temperatures as low as possible with all the heat-radiating equipment there. To that end, an RV6 Ceramic-coated Front pipe and PTP Downpipe blanket were utilized; the coating and blanket both work to keep the heat from radiating too much from the pipe surfaces, reducing exhaust gas velocity and increasing possible damage to nearby components. The factory catalytic converter system was also replaced with an RV6 high-flow downpipe with integral catalytic converter, also treated with ceramic coating to keep the heat internal to the exhaust piping. From there, the exhaust gasses leave through an HKS LegaMax Premium exhaust system. 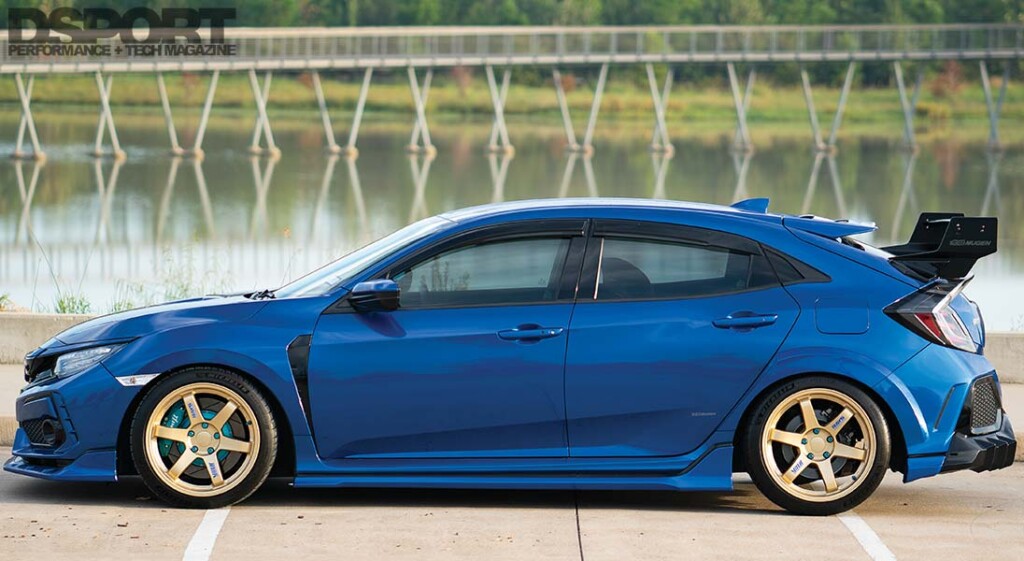 The increased power production is orchestrated by a Hondata Flash Pro programmed with a Pherable Stage 2 Tune by John Vega. Jonson’s parts, in conjunction with the tune, increased the FK8 Civic’s output to the tune of 354.13 whp and 355.45 lb/ft torque, moderate power gains that are exactly in line with what Jonson wanted the whole time; a fast, reliable daily-driven show-quality car. 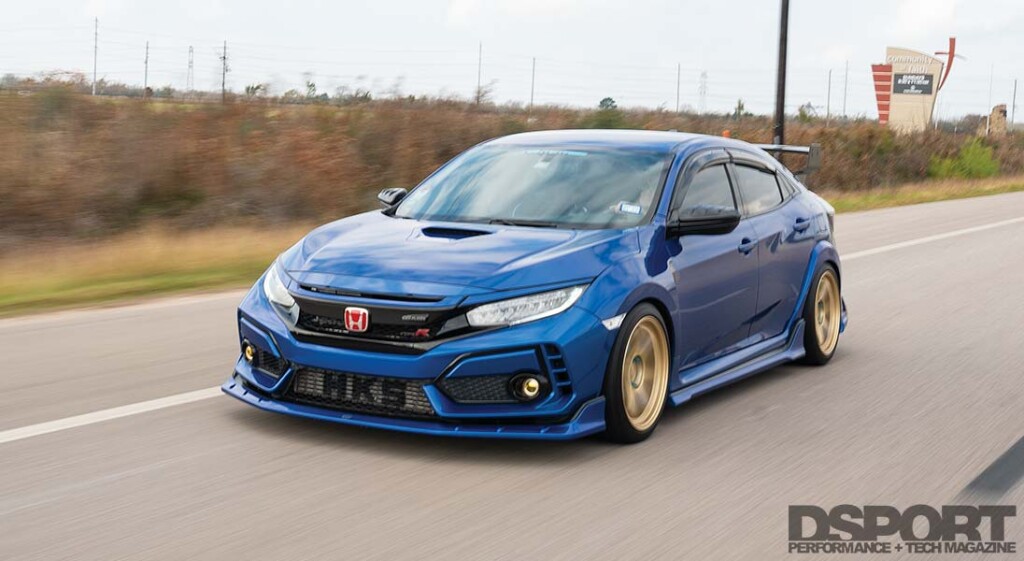 “It’s a great street car with good power for daily driving and reliability,” Jonson relayed. “This car is pretty much done. But if I were to do something, it would be RSR Active Coilovers so that I can maintain the factory Adaptive Damper System.” Like many of the Honda modifiers before him, maintaining much of the OE engineering and stock products is almost equally as important as trying to improve upon the car the second it rolls out of the dealership parking lot; that’s the best way to honor the top-line cars that make it to American shores.