A little over 10 years ago, DSPORT flew to Japan to drive the soon-to-be-released Scion FR-S (Toyota 86 in Japan). Despite that happening a decade ago (Issue #112), the memories of that experience are still as vivid as ever. Leading up to that launch event, it had been too long since a Japanese OEM offered a fun, affordable front-engine, RWD sport coupe with tremendous performance potential. Toyota and Subaru collaborated to change all that with the FR-S (Toyota 86) and sister-platform Subaru BRZ. At Sodegaura Forest Raceway, tossing the FA20-powered sport coupe over the 14 turn, 1.5-mile course was a blast. We even found the limit on our final lap on a wet track surface where we exceeded the grip limit and managed to get some mud in the wheel wells. Not to be outdone, Subaru launched its BRZ with an event in the French Riviera (Issue #116) which included a trek with twisty mountain roads into the Alps followed up by a trip to Isle of Man (Issue #119) for some lead/follow rally action with Mark Higgins. The opportunities the OEMs provided in this pre-Covid era were amazing and we truly got a feel for the car. My first date with the 2022 GR86 would prove to be more along the lines of instant ramen and watching Netflix. Despite the setting, there is definite interest in going on a second date and perhaps starting a relationship with the 2022 GR86.

Text by Michael Ferrara // Photos by Joe Singleton and Toyota 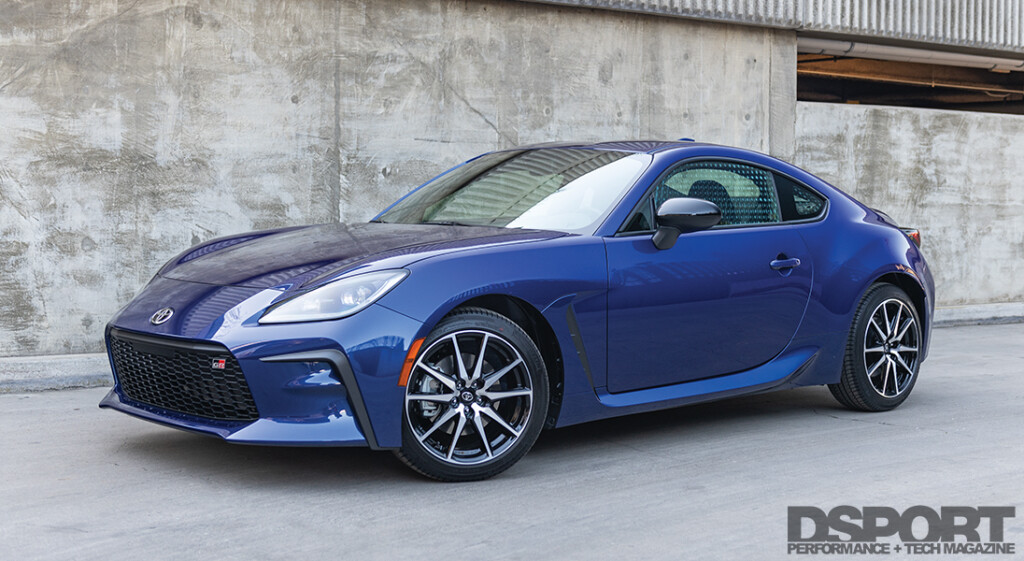 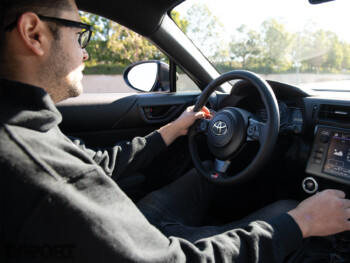 No international business flights, stays in 5-star hotels or visits to famous racetracks for our first-date with the 2022 GR86. We simply had the vehicle delivered to our office for a one-week stay. While a better-optioned automatic version was available a few days earlier, we opted to wait for a base model 6-speed to have some three-pedal fun.

Our initial impression on the looks was mixed. Some loved both the revised front and rear while some disliked the rear. About the only unanimous opinion was that the tire-to-fender gap was excessive and that the 215s looked was too skinny for the vehicle. However, a makeover with proper suspension, wheels and tires is in the future of probably every GR86 that would be purchased. That being the case, it was time to get a real feel for the second-generation FR sport coupe. 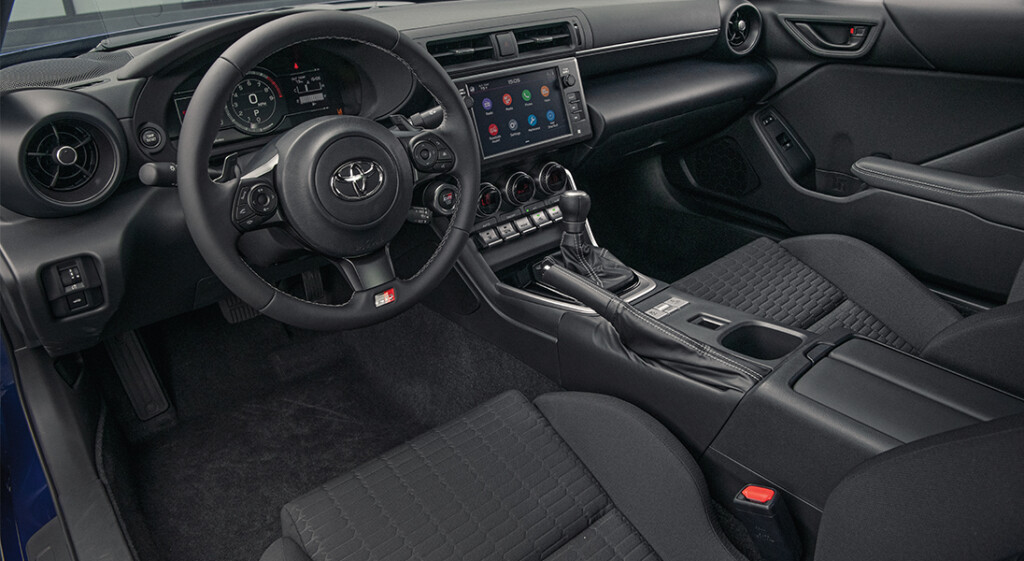 The jump in the car and take it around the block test wasn’t as impressive as I thought it would it be. Acceleration was good and a marked improvement over the first-generation FR-S/86/BRZ, but blasting down some straightaways alone didn’t win me over. The clutch pedal feel was just a bit numb and unpredictable. Even after driving the car for an entire week, my opinion of clutch feel didn’t improve. However, seven days of driving on the street changed my opinion of the GR86 in every other category.

(L) Putting the GR86 into Sport mode changes the display to a tacho-centric arrangment. The digital “needle” does a decent job following engine speed, but it’s definitely not as good as an analog needle. (R) The display allows connection to Apple Play negating the need for a dedicated nav for most drivers. Overall the system worked and sounded pretty good. Audio upgrades would be welcomed.

On Day Two, I made a U-turn that would forever change my opinion of the GR86. With just normal driver input, the rearend of the GR86 kicked out a bit and yelled “let’s have some fun.” From that point forward, any opportunity to combine steering and throttle input delivered a thrill. Had we had the opportunity to test drive the GR86 on a racetrack, we would have been immediately impressed with the GR86. Instead, it took us a little longer to find love. 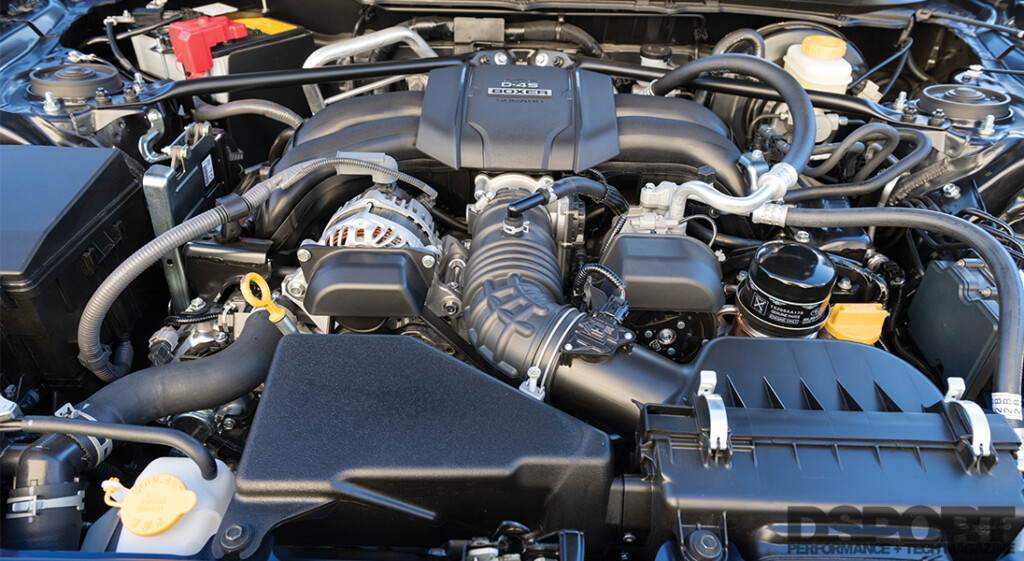 It’s not only bigger in displacement, it’s much better in power, torque and efficiency. Power increased by 28 percent while the engine grew 19.5 percent in displacement.

The selection for a Japanese front-engine, rear-wheel-drive, manual-transmission sport coupe is quite limited. Currently there is only the Mazda MX-5 Miata, the Toyota GR Supra and the 2022 GR6. Soon, the new Nissan Z will also be added to the mix, but the 2022 GR6 may prove to be the best choice for many. The Mazda MX-5 Miata has the benefit of being the lightest of the offerings, but it is also the weakest barely delivering 75 horsepower per thousand pounds of vehicle weight. It also has the draw back of having just two seats making insurance more expensive. The GR Supra also deals with increased insurance rates due to its two-seat configuration. The 4-cylinder offering sports the same advertised power to weight ratio of the GR86 at about 80 horsepower per thousand pounds (in reality, the GR86 puts out over 90 horsepower per thousand pounds). The 6-cylinder Supra sports over 110 horsepower per thousand pounds for a definite performance advantage, but it comes in at nearly twice the price. The new Nissan Z  will definitely deliver a higher power to weight ratio than the Toyota GR86, but it will likely sport a price premium in the neighborhood of $10K to $15K. While we can’t compare the GR86 to the New Z yet, we can compare it to the A90 Supra. The GR86 provides much better visibility in all directions while also providing more comfort for both driver and passenger. While the rear seats are more for reduced insurance rates than actual usage by passengers, their presence allows the front seat to be reclined to a position of comfort (something not really possible on the A90 Supra). While the GR86 is roughly half the price of  a 3.0L A90 Supra, it is definitely a more comfortable daily-driver. 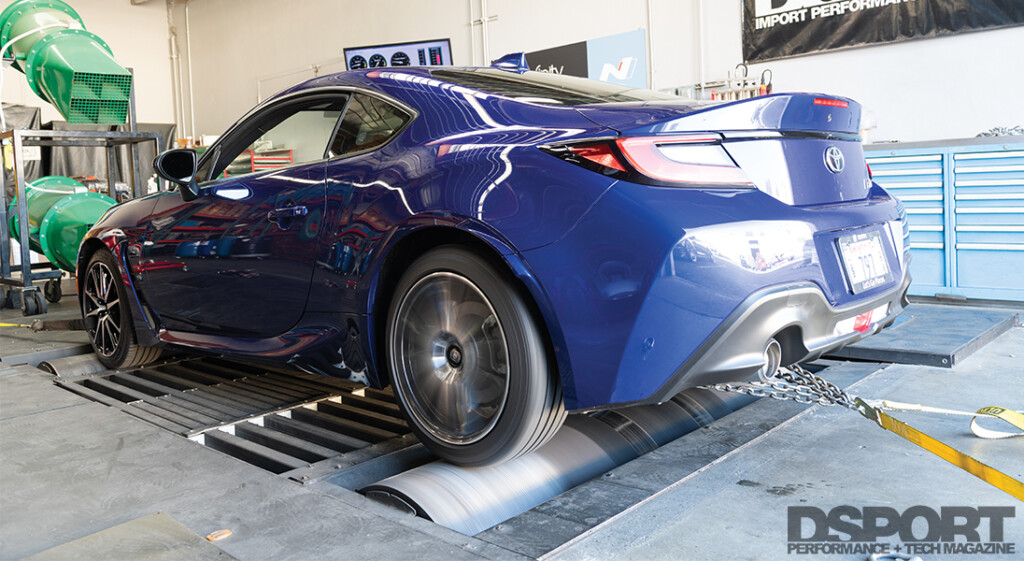 Considering that we did the ENEOS 86 Challenge and both an intake and exhaust shootout with the 1st-generation FRS/BRZ/86, we have nearly 1,000 dyno runs of these vehicles in our database. On the DSPORT Dynojet dynamometer, the first-generation the stock FA20 powerplant delivers 173 horsepower to the wheels (equates to 203.5 horsepower at the flywheel). This is right in line with Toyota’s claim of 200 horsepower at the flywheel (underated by just 1.75 percent). 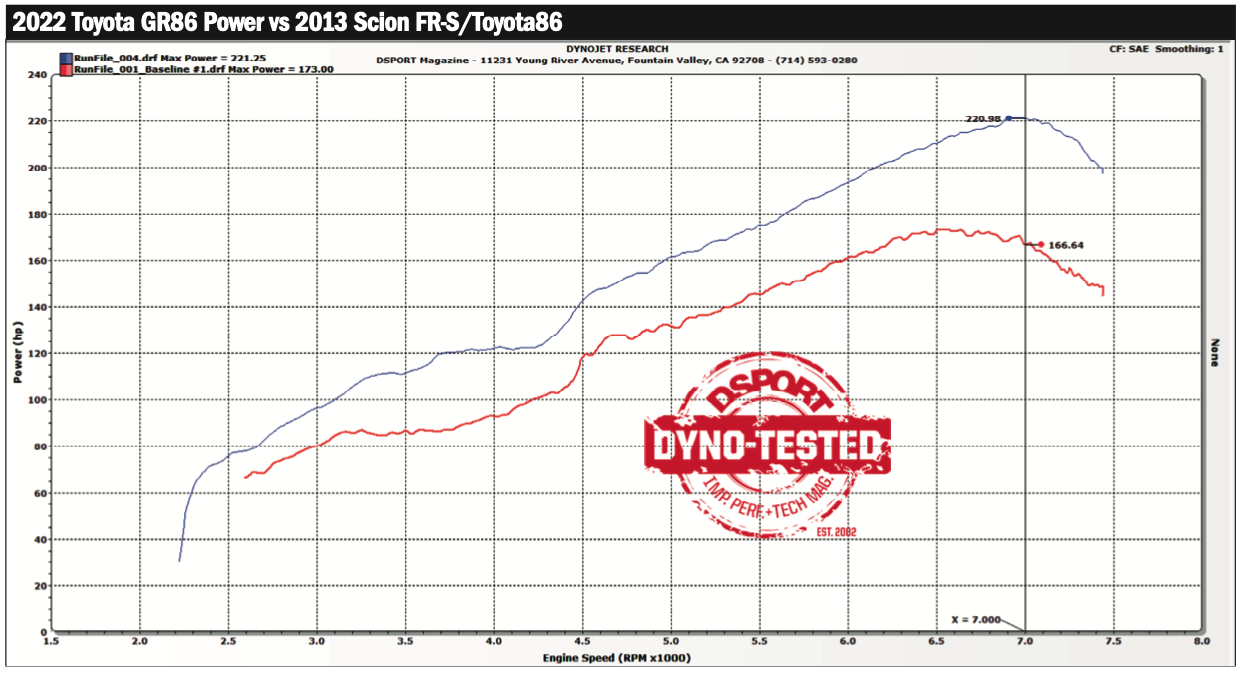 It’s better everywhere. The power curve for the second-generation GR86 dominates versus the first-generation FR-S/86/BRZ. Peak power is up over 48 horsepower at the wheels and up nearly 55 horsepower at 7,000RPM. The FA24’s power curve is very similar to the FA20 with a CARB-legal supercharger. 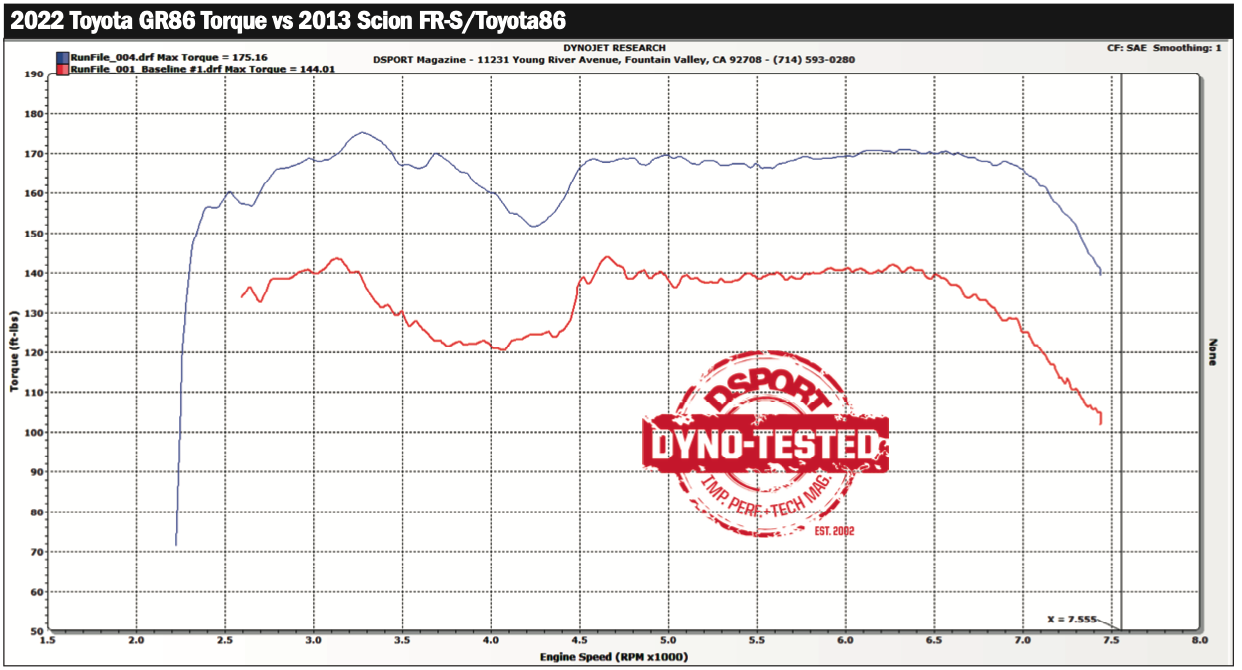 With the 2022 GR86, Toyota claims 228 horsepower at the flywheel. Toyota lied. We measured 221.25 horsepower at the wheels. That equates to 260 horsepower at the flywheel. Toyota has underrated the power by nearly 15 percent. In comparison to the first-generations FA20 engine, the 94mm bore FA24 engine delivers 28 percent more power and 21 percent more torque from the 19.5-percent larger displacement engine. Not only did the FA engine grow in size, it grew in efficiency and performance. Despite it larger size, it’s appetite for fuel is exactly the same in combined city/highway tests coming in at 25MPG. 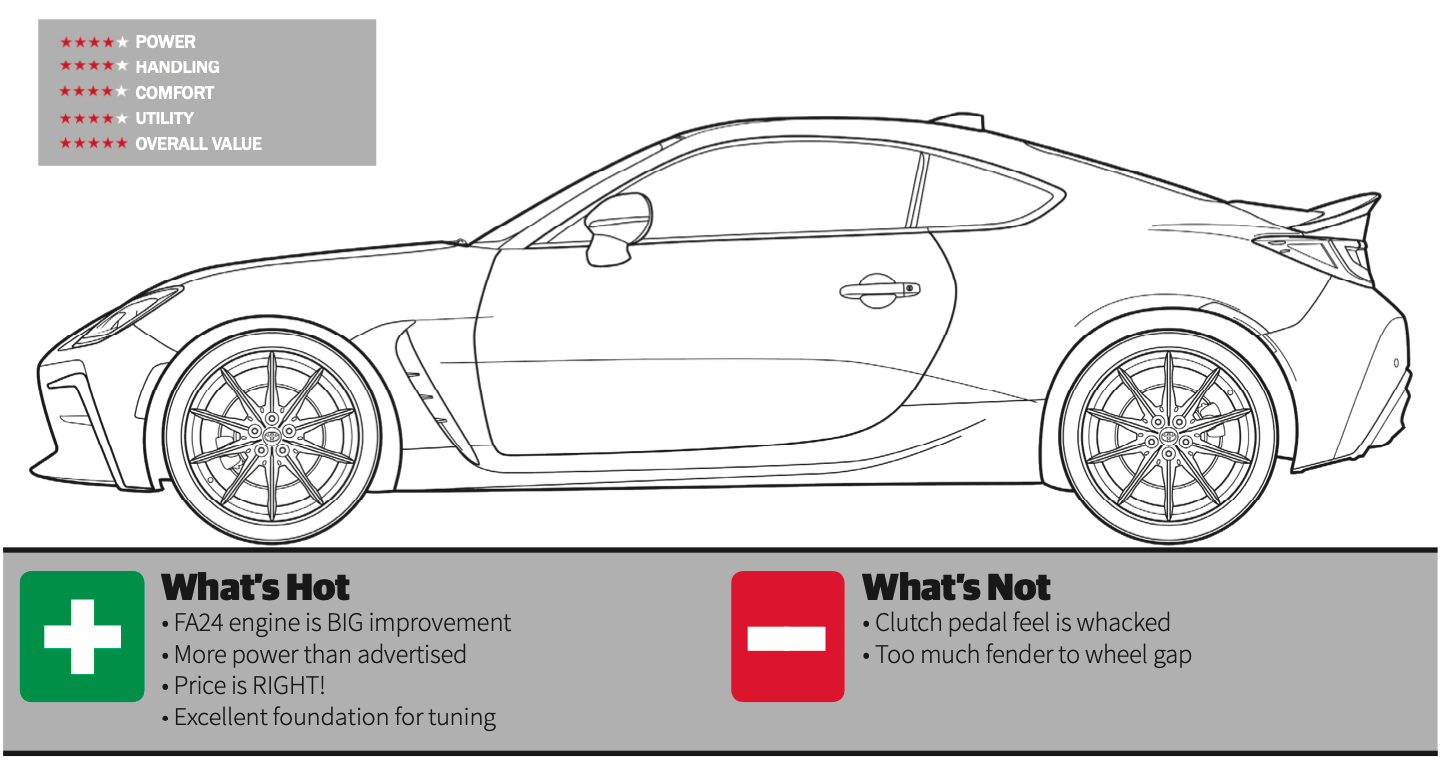 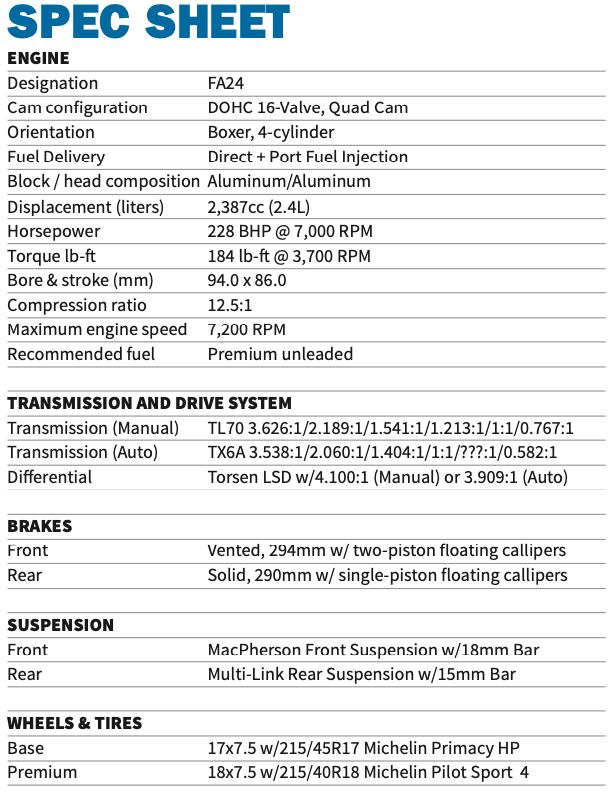 Rarely do you get more that you are promised, but the 2022 Toyota GR86 does exactly that. You get nearly 15-percent more power than quoted at an MSRP that starts under $28K. To say this vehicle is a great bargain is an understatement. While Covid prevented a proper long lead introduction for the 2022 GR86, we eventually came to love the platform the more we drove it. While the dealer isn’t likely to allow test drives that truly showcase the car’s potential, rest assured that it is there when the time and place is right. As soon as we can make some space in our D’SPORT garage, we will probably be adding a GR86 or BRZ to the stable. If you are planning to buy one, be sure to subscribe today as there should be a lot of GR86/BRZ editorial on the horizon.