You may recognize the Civic as one of the most popular cars in the world, but the story of Honda wasn’t always as smooth as its sales numbers today. Founded by Soichiro Honda, he started his first company named Tokai Seiki in 1937. He began crafting piston rings for a familiar company called Toyota. After giving up all control to the War Ministry, the destruction of one factory during World War II, and another factory tragedy courtesy of the Mikawa earthquake, the beginning years were nothing short of a struggle for the Japanese founder. In 1963, Honda began the production of cars after becoming one of the largest motorcycle manufacturers in the world. Before the introduction of the Civic in 1972, Honda was planning on ceasing all car production. However, the surprising reaction from the market changed the direction of the Japanese company forever, which lead to the journey of one of the most successful compact cars in the world today. 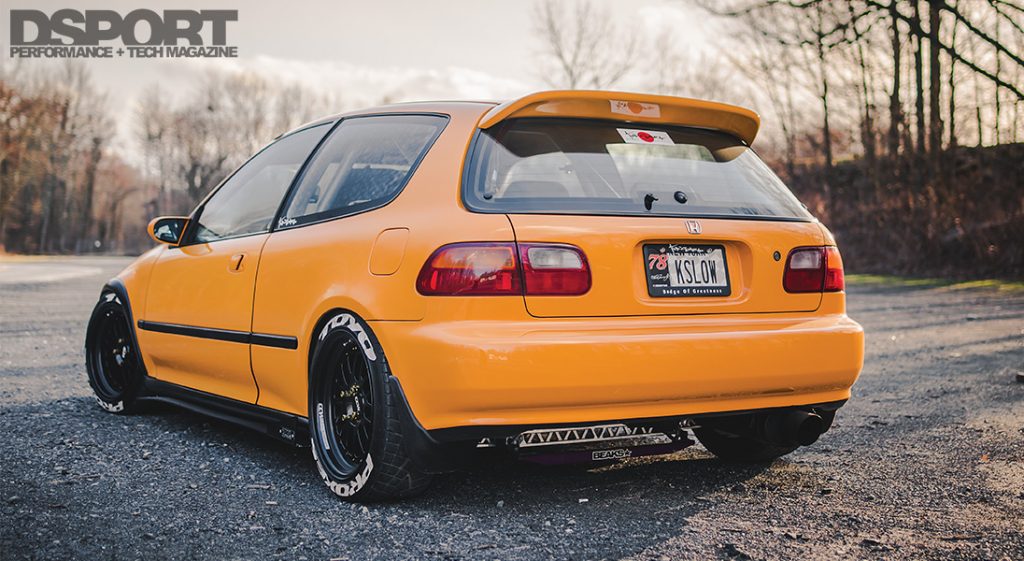 What started as a small 50 horsepower reliable way of transportation quickly became a tuner’s favorite as the generations evolved. By the third generation, the Civic had become a force to be reckoned with, thanks to the futuristic-at-the-time design and the 1.6-liter engine that was filled with potential. The Civic was redesigned with far smoother aerodynamic design in the fifth generation that made it a display of great looks . Whether it was comfort, fuel efficiency, or affordability, this generation delivered. For Albert Marty, however, none of these mattered. He simply wanted to cross the line and go all out with his 1993 Honda Civic DX.

The love for Hondas ran deeply in Marty’s family. Before acquiring the ’93 hatchback Civic that belonged to his father, he owned a 1998 Civic. He watched his Dad drive the DX every day while admiring its body style. Luck was on his side when the stars aligned and his father wanted to trade cars. As the years go by, this generation of hatchbacks is becoming rarer, which motivated Albert to make it something special. With the help of his father and two brothers, the brainstorming began and the plan for the Civic was set.

Although Albert was already in love with the hot-hatch, he wasn’t thrilled with the stock power output it was making. The car came stock with a 1.5-liter D15B7 engine that delivered 102 horsepower. The first item on Albert’s list was to put this horsepower number behind him and multiply it by at least five. Fortunately for him, the car had no rust, neither has it ever been in an accident. So he knew he was working with a clean foundation. “The goal is to attract the attention with the style, then follow it with the roaring sound of the engine,” said Albert Marty. 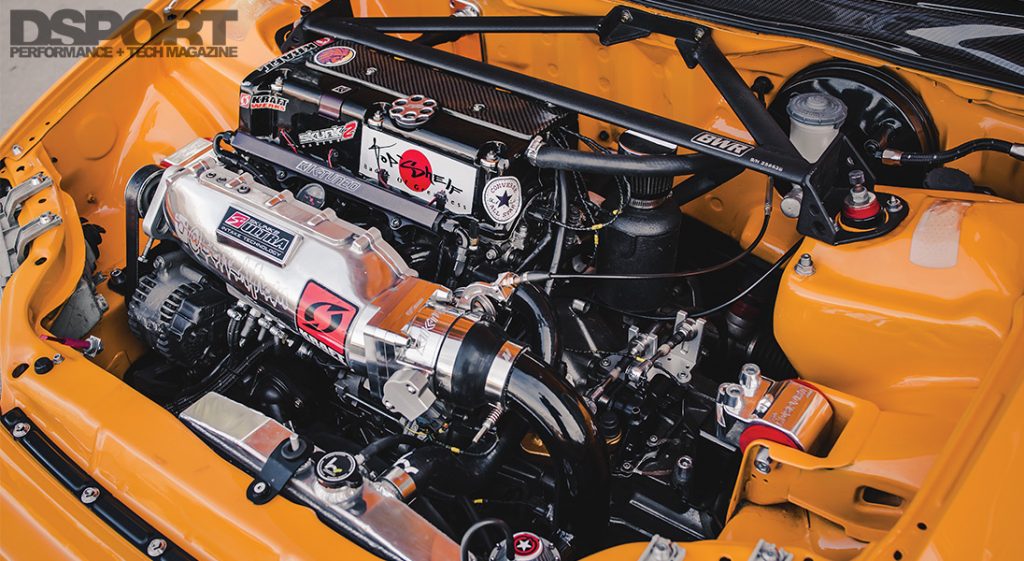 Skunk2’s Ultra Series intake manifold ensures all four cylinders receive maximum and even airflow, while offering rigid construction thanks to the thick walls. 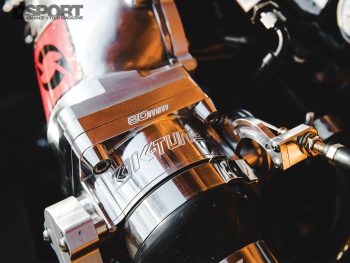 Achieving five times the power of a stock engine is no easy task. As the power increases, internal engine components can be in jeopardy. With this in mind, Albert and his family chose the K24 engine block as the heart of the Civic with the K20 head. To strengthen the engine and allow for the tremendous power increase, they machined the block and equipped the cylinders with sleeves from LA Sleeve. This would allow the engine block to handle far more power than it was intended to withstand. Boosting the Civic was a no-brainer for Albert; however, he long debated between a supercharger and a turbocharger. Since his father had a Kraftwerks supercharger in the EG6, Albert knew what the supercharger has to offer in terms of instant response and power output. They installed a Kraftwerks supercharger to force an immense amount of air into the engine. With the supercharger in place and numerous complementary modifications, they upgraded the throttle body, fuel pump, and fuel injectors to fine tune the air/fuel mixture and achieve a power output of 555 horsepower and 313 lb-ft of torque at 15 psi of boost on E85 fuel. The engine machining and modifications were just the first step in the overall goal. Albert wanted to achieve reliability, power, and looks, which meant the journey was only starting for this family. 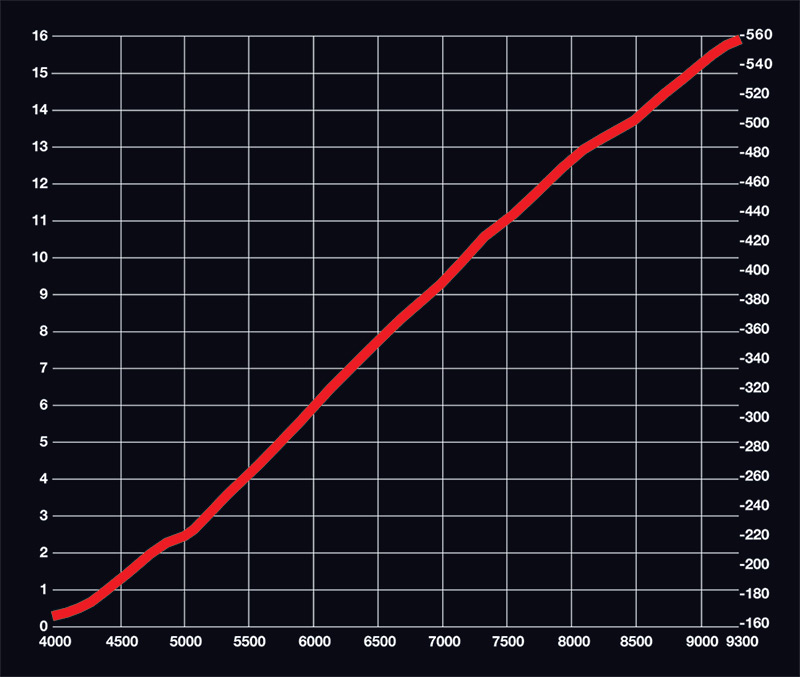 The build is as rewarding as the journey it goes through, and for Albert, this project brought the entire family together every day. With everyone being on the same page of making this Civic as powerful as it is good-looking, things didn’t always go as planned. When the car was first put on the dyno, the results simply didn’t add up in regards to the power goals. Each time there was an obstacle, the team would go back to the father’s garage as a family and think together until they came to a solution. Finally, they recognized that the lack of power is due to the small intercooler, which fails to cool the air properly thus causing its temperature to rise and detonation would occur. So they went with a bigger intercooler from SpeedFactory, which solved their power problems and allowed them to move onto the next stage. 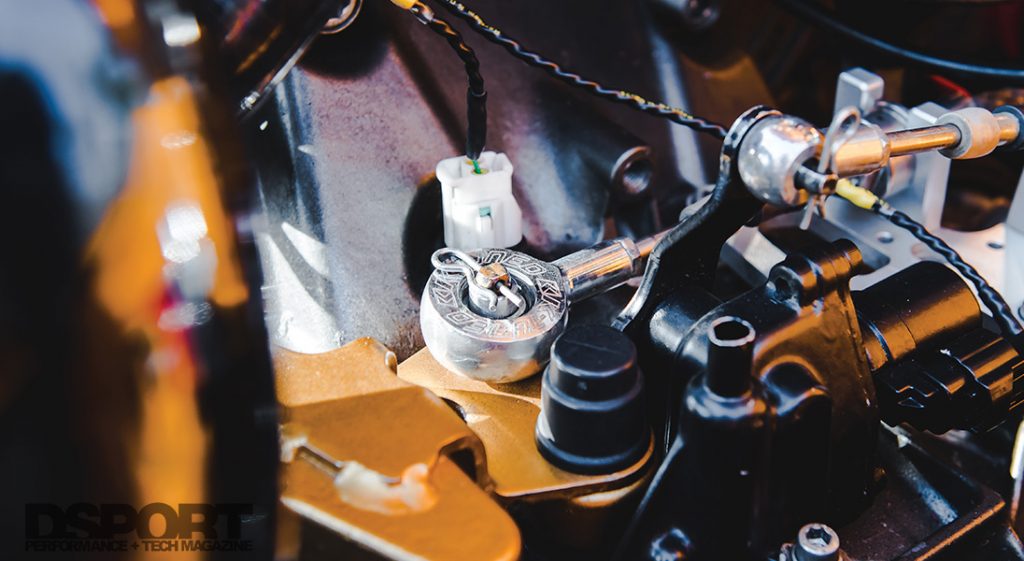 A 6061 billet aluminum shifter cable bushing with a spherical bearing replaces the rubber bushings that came as standard equipment. This gives a solid, precise feel when shifting through the gears. 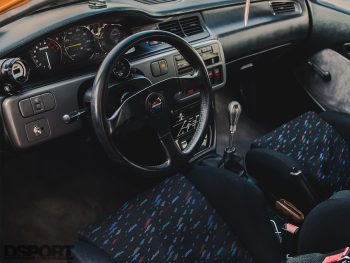 Described by Albert as having “truly amazing looks,” the Civic didn’t always look this special. When Albert’s father owned the car, it was mostly stock. After lowering the Civic and stiffening up the suspension with coilovers and other chassis braces, the car was ready to handle the power increase, while maintaining a sleek look with its low three-inch stance. On the outside, Albert chose a custom orange paint to accomplish one of the goals: stealing the eyes. The paint contrasts nicely with the CCW LM16 wheels, and the thick TOYO PROXES lettering on the wheels make all the difference at car shows. Finally, the interior remains simple with just some classy touches, like the Recaro Confetti seats and the Spoon steering wheel. 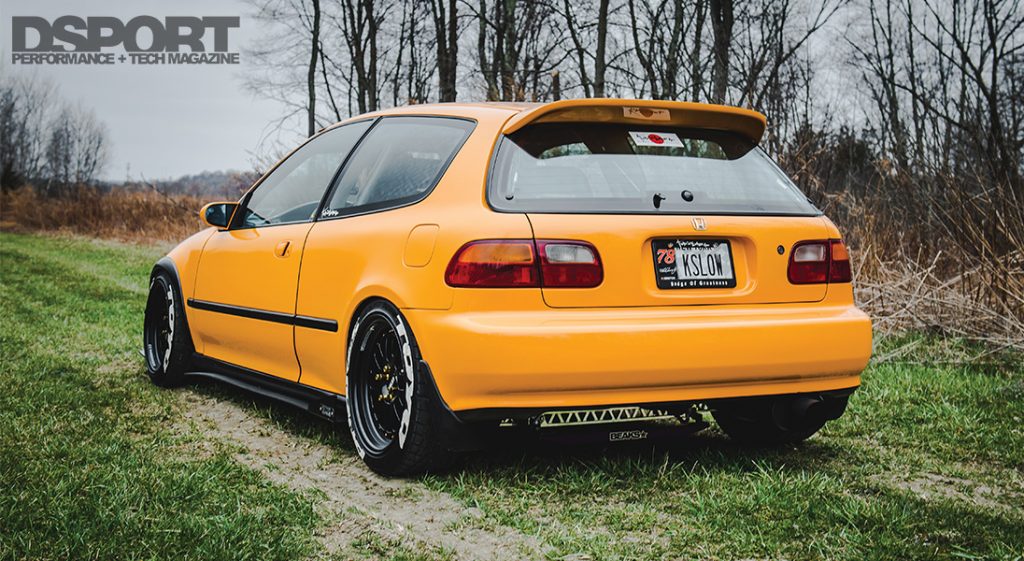 Albert’s ’93 Civic is special in many ways. “I am most proud of the all-around reliability,” said Marty. Aside from achieving five times the power the Civic once delivered and slaying all the goals in the looks department, the Civic gives Albert almost no issues. He drives the Honda regularly to car shows, but it’s most certainly not all show without any go; you may also spot him in New Jersey at some of the local drag strips. In the quarter mile, Marty’s Civic achieved a best time of 11.21 seconds, all while still getting awards at numerous car shows, like the HDay event, Clean Culture, and Import Expo. The future is as bright as the orange paint on his car, and aside from an upgraded brake system and a stronger transmission in the near future, this Civic is living its best life.