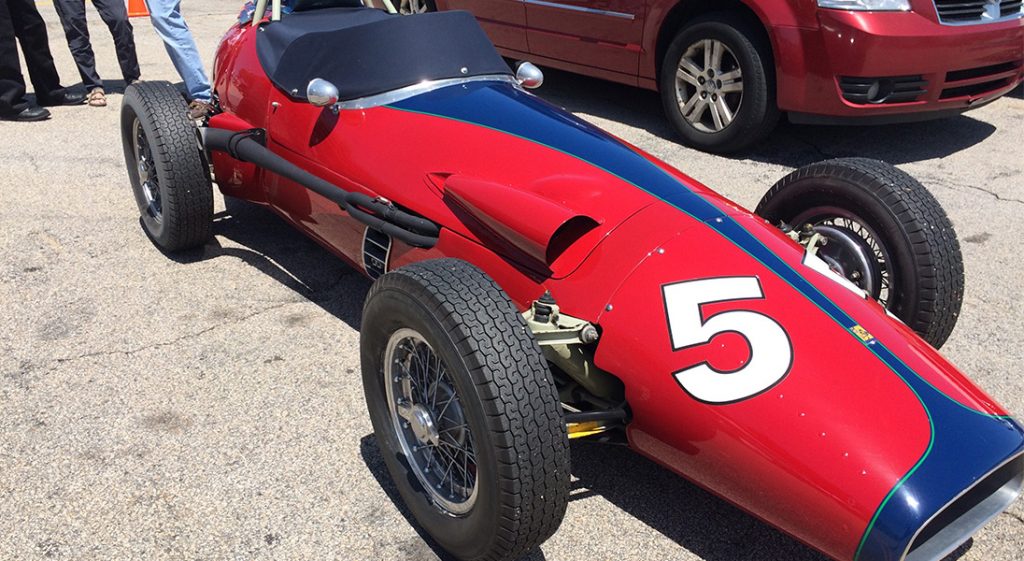 Now because I come from the music world, interpreting music geek-speak is pretty easy. I know about BPMs and lathes, colored vinyl and limited edition pressings. I comprehend techy-talk about analog microphones vs. digital inputs etc. I’m pretty comfortable navigating my way around a music festival or record release party. But park me in a sports-car festival setting like the 41st Classic Motorsports’ Mitty presented by Hagerty held at Road Atlanta April 27-29, 2018 and I was feeling way outside of my wheelhouse. But as I chatted with enthusiasts and participants, I realized that there are so many crossovers because of the passion, all I had to do was focus on that and I could blend effortlessly into the crowd and be part of the event. As we rolled in that Friday morning, the track was a hive of activity and a buzz of sound. Vintage racecars, some worth millions were rumbling in and out of the pits as drivers and crews made last-minute adjustments to achieve the perfect performance. It was just like being at a music festival before the doors open to the public. All the behind the scenes activity that goes into creating the perfect event for spectators is critical. I wandered around, peaking under hoods and eavesdropping on conversations. My first stop was the Datsun/Nissan tent, which were the featured marque for the weekend. Boasting a champion racing pedigree that dates back almost as old as the company (first win was 1937 in Japan at Tamagawa Speedway), new vehicles were on display for spectators to view, as well as some of the older cars from the vintage racing days, including John Morton’s winning number 46 Datsun 510. 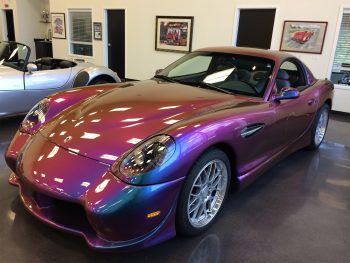 From there we headed over to the Elan Motorsports by Panoz tent. Just a short drive from Road Atlanta in Braselton, the company designs premium-racing prototypes at a surprisingly affordable price. Sexy and sleek, these handmade sports cars offer a solid economical foundation for any race fan. Three different models were on display, and while there was no way to test-drive any of the cars during the event, they were clearly garnering attention based on the sizable crowd that gathered throughout the day. I was offered the chance to tour the factory, so I jumped at the chance to observe first-hand what goes into researching, designing and manufacturing a winning limited edition custom race car. The tour ended with a stop at the Panoz museum, where the brief but successful racing history of the company was laid out in eye-popping glory. Keep your eye on this company; I expect we’ll be hearing more about them in the near future. 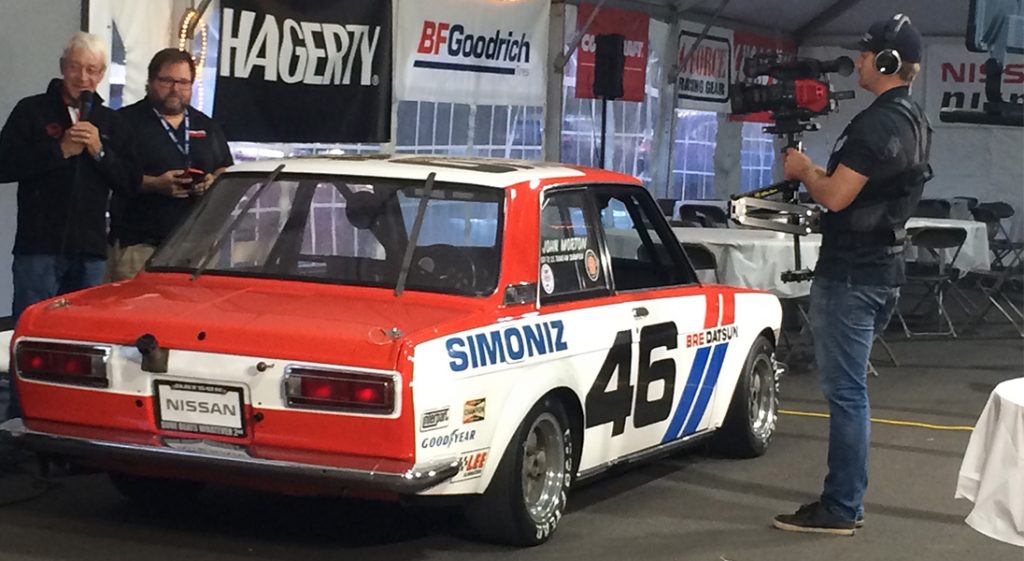 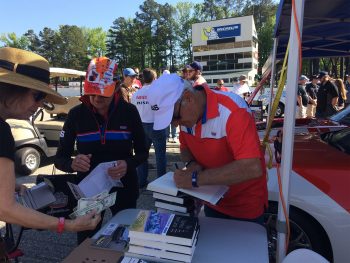 Returning to the track, we headed to the support paddock to meet legendary racecar driver John Morton. Putting the diminutive boxy Datsun 510 sedan on the map after winning both the 1971 and 1972 “Trans-Am Two-Five Challenge,” Morton’s win blew the door open for Datsun/Nissan to enter the American car market, not only in racing but for the personal use vehicles as well. Morton was on hand as Grand Marshall for the weekend; calm, gentle and engaging, he posed for pictures with fans in front of his legendary racecars. He had just taken his 240Z out on the track before we arrived and threw a rod, smashing a golf ball sized hole in the casing. The crew was feverishly working to fix the engine, but realizing it was hopeless, started looking around for a replacement engine so Morton could race later in the day. 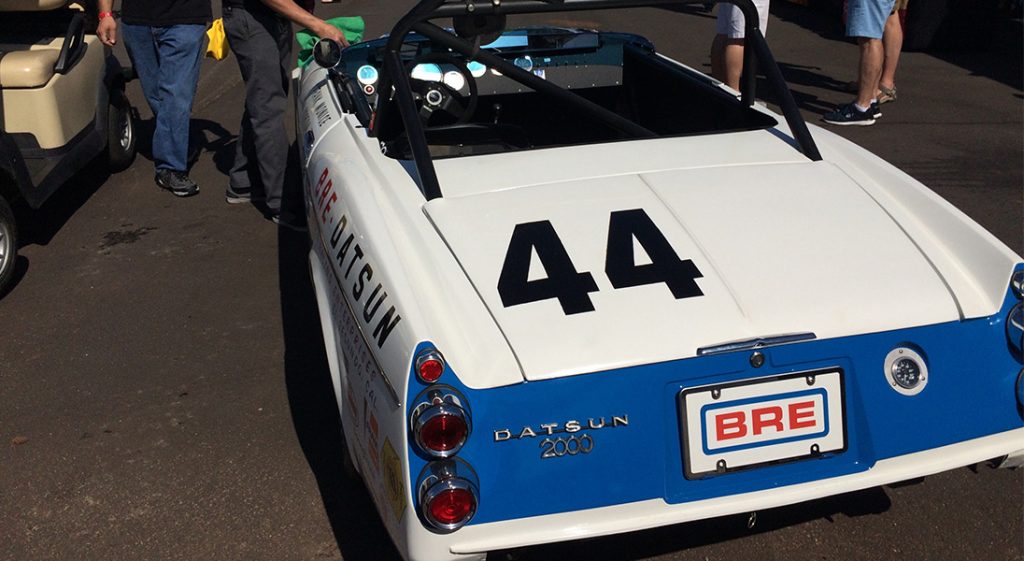 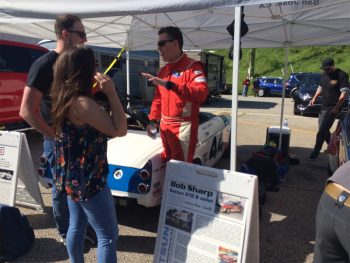 Down to earth and humble, Morton was the rock-star of the Mitty, but you would never know it with how approachable he was. Just off to the side of his rig was another celebrity, TV personality Adam Carolla. Decked out in a faded red fire suit, Carolla stood chatting with fans about his collection of Datsun racecars. Movie star Paul Newman who was a racing fanatic in his spare time formerly owned several of the valuable cars. Carolla produced a documentary about Newman titled “Winning: The Racing Life of Paul Newman (2015)” about Newman’s racing career, and the cars Carolla owned. The movie was shown, along with the vintage short documentary “Against All Odds” about Morton in the Classic Motorsports VIP tent to a sold out crowd Saturday evening. Throughout the weekend, spectators could wander the Fan Zone, checking out vendors, project cars and fair-style food, or they could take part in the numerous sideshow events offered throughout the weekend. Mingling with drivers and talking cars was just part of the fun. BFGoodrich Tires featured a Ride & Drive event, open to anyone who wanted to hop in a car and take a spin around a mini-track. One car was decked out with generic tires, while the other identical car sported BFGoodrich Tires. I jumped in a car, nervous and uncertain what to expect, but my professional racecar driver assistant Scott buckled us up and guided me around the course. Twisting and winding my way through the turns, Scott urged me to go faster, saying, “pretend I just cut an artery in my arm! You have to get me to the hospital as fast as you can!” It was a blast and my second time around the course, I loosened up and got into character. The first car I drove had the generic tires on it. For comparison I took the BFGoodrich tire-equipped car out on the same track with the same guidance. Surprisingly, I noticed a difference as the second car had a much more “sticky” feeling to the tires, making it easier to whip around the curves at a higher speed with greater control. I was impressed, convinced and exhilarated all at the same time! 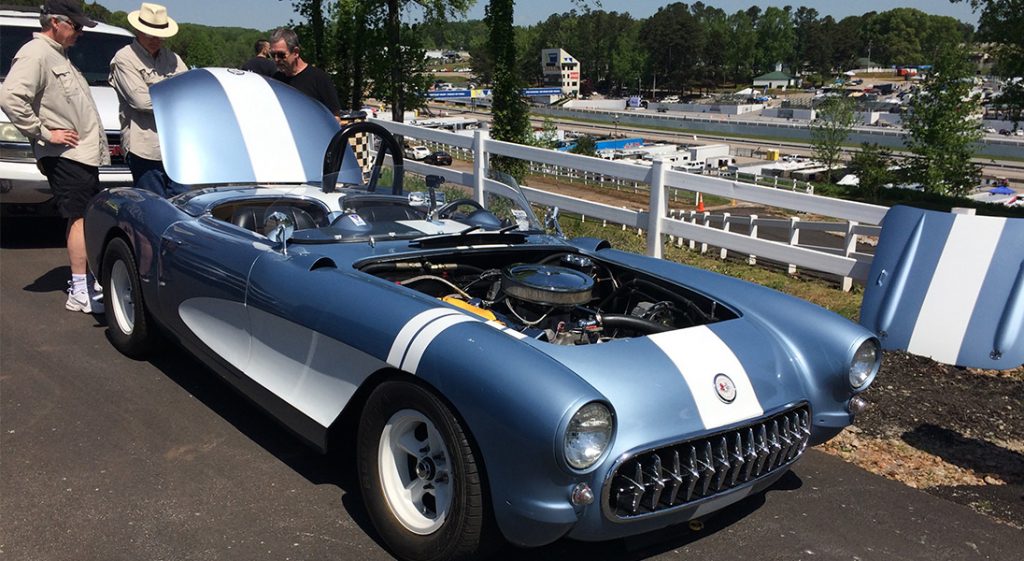 Each day fans were offered the chance to drive “parade laps” around the 2.54-mile Grand Prix style Road Atlanta course. Boasting twelve turns, steep up-hills and plunging down hills, dotted throughout with several long straight backstretches to get some speed going, I leaped at the chance to join in the fun. While I didn’t drive (I had been drinking), the ride-along in the passenger seat afforded me the opportunity to really sit back and enjoy the experience, not once, but on three separate occasions. Once in a 1972 Triumph TR6, the second time in a 1956 Corvette and the third time in a 1968 Datsun Roadster. Each of my hosts were accommodating and thrilled that they could show-off their rides to a reporter, zooming around the course at speeds up to 80 mph. 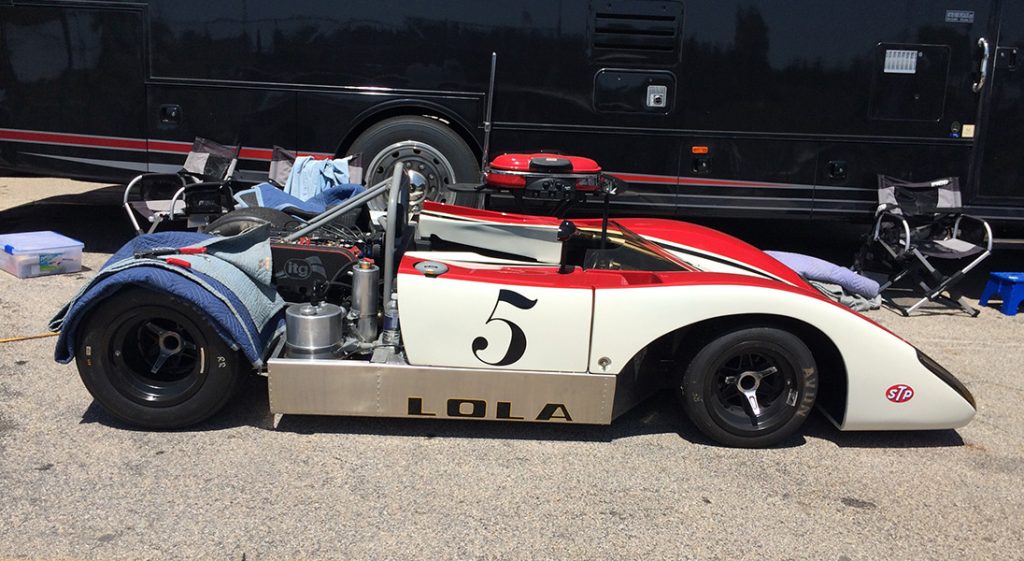 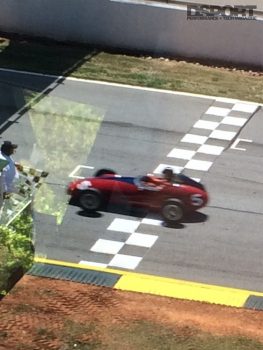 Of course, the main purpose of the weekend was the historic cars testing their chops on the track. Everything from vintage Ferraris to Lolas, and from Formula Jrs. to Covairs pulled onto the track, racing in different classes designed by the Historic Sportscar Racing league. The growl of engines filled the air above the announcer, calling out each class onto the track. The thick smell of high-octane fuel filled the air as lap after lap of vintage sports cars competed for boasting rights of the checkered flag and a first place win. On Sunday Lucas Oil sponsored the Skid Pad Challenge, where participants could test the speed and handling of their cars on an oval dirt track. Cars lined up at noon for the opportunity to race against the clock. No necessary arrangements or modifications need be done, so folks just pulled their everyday drivers in line and went for it. 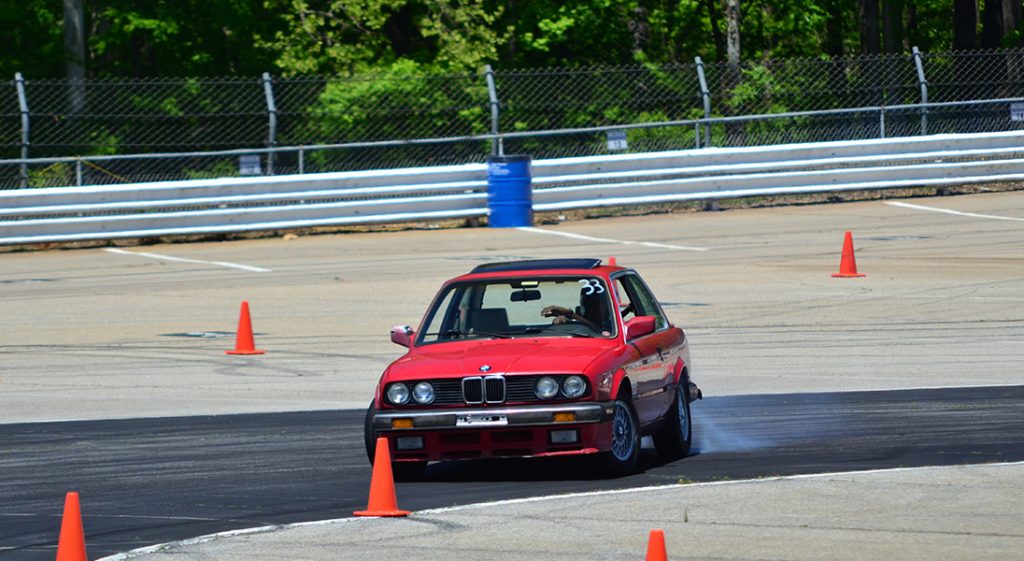 I headed for the airport Sunday afternoon, tired but thrilled with the experiences of the Mitty weekend. Even though I don’t speak “car-talk,” it was a blast. West-coasters shouldn’t worry about missing the 2018 Mitty, as Nissan will be bringing many of these cars to Monterey in August for the historic races at Laguna Seca, as well as the Japanese Classic Car Show in Long Beach in September.