Japan has introduced some impressive machineries over the years, but none more impressive than the GT-R. Sharing the same platform as the R32 and R33, the R34 GT-R is considered by many to be the last of the legendary line of GT-Rs. The R34 era was over five years before the debut of the fancier R35, and although the R35 offers the best of all worlds, the R34 GT-R is one of the iconic Nissan Skylines. In November of 2016, Charles Wong picked up a 1999 Nissan Skyline GT-R, and the rest, as they say, is history. 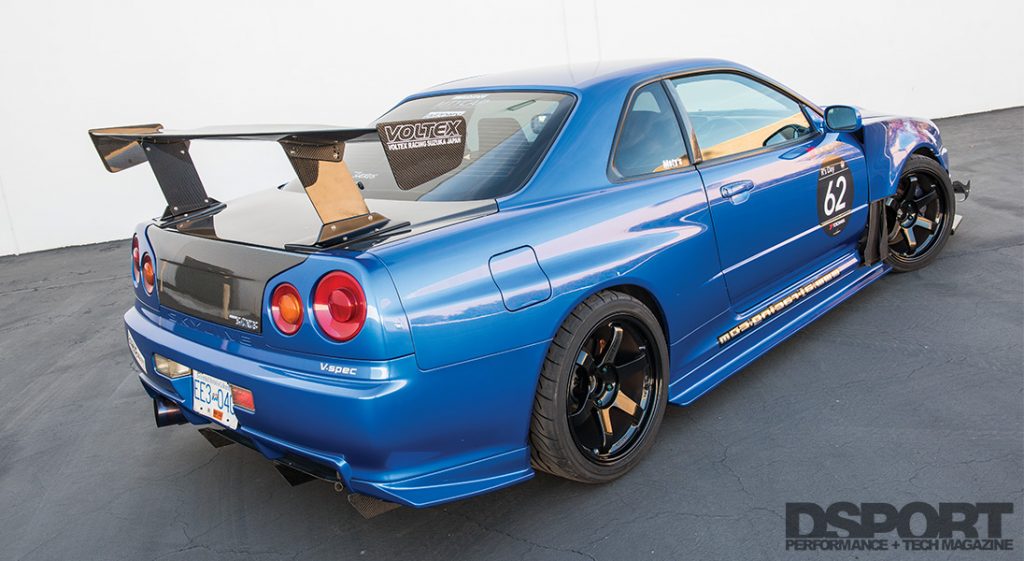 Where it All Started

Charles Wong is no stranger to the GT-R line, and well before he bought his R34, he was already hooked from his previous R32 and R33. After owning two of the best GT-Rs to ever get produced, he felt it was only right to give the R34 a shot. He found his 1999 R34 at Global Auto in Osaka, Japan, and he had it imported to Canada where he resides. For Charles, nothing could come close to the styling of this Skyline’s platform, so he was sold long before writing the check. Aside from the sexy styling of his R34, the car came with most of the engine modifications already done, and all he had to do was make it his own and start the fun.

With plenty of GT-R experience, Wong had his plans for his newly acquired R34 all laid out. His goal was to mold this car into a fun track car that can reliably drive home after, and although he never cared to make it the fastest car on the track, it is tough to be last in an R34. When Charles bought the car, it was making 500whp; however, after applying some of the same strategies he learned from his previous GT-Rs, the power is expected to go upwards. 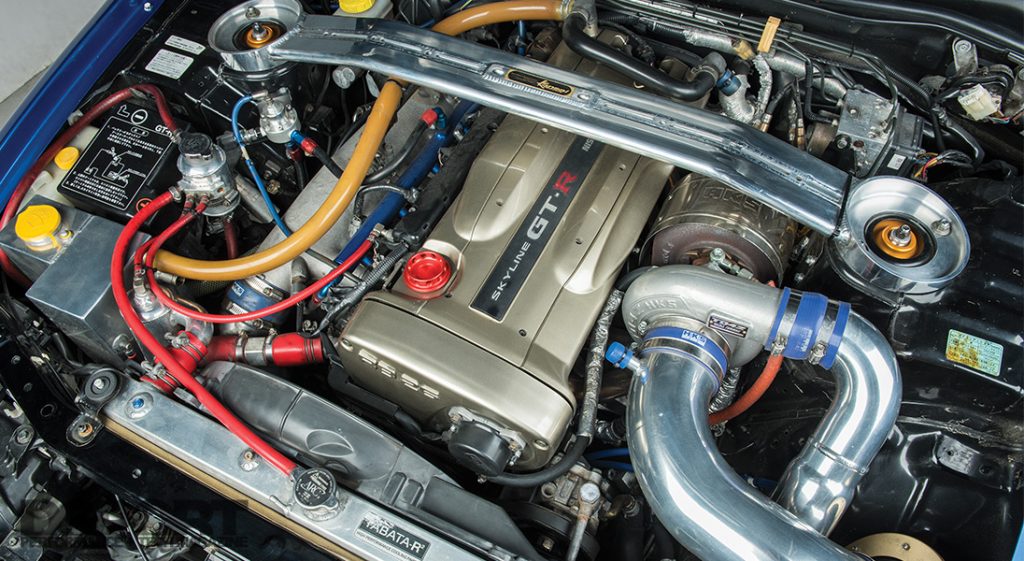 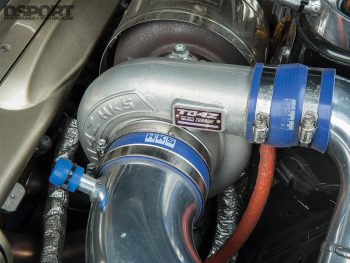 With the stock engine under the hood, the RB26DETT has a bore of 87mm and a stroke of 73.7 for a 2,629cc engine displacement and a compression ratio of 9.0:1. Built by Nagoya Precision, the engine gets 87mm HKS Step II pistons and connecting rods. With the stock crank in place, they upgraded the engine with Naprec camshafts and Reimax valves, springs, and retainers. The cylinder head was ported to improve the quality and quantity of the air flow. The head is tightly sealed using Tomei studs, which can handle much more power than the engine produces. To take the performance to the next level, an HKS T04Z turbocharger was installed. The T04Z is compact in size, but it can reliably handle more than 700 horsepower. It is constructed with an MHI high-efficiency center section with a forged aluminum impeller, which makes for an extremely durable turbocharger. The T04Z turbocharger connects to an HKS stainless-steel exhaust manifold. To protect the engine and the turbocharger, an HKS wastegate was installed to regulate the boost pressure and allow excess exhaust gases to bypass the turbine.

An HKS exhaust system and a Tomei Expreme muffler route spent gases from the engine. To support the extra air from the turbocharger, the 94-octane gasoline is sprayed through Sard 1,000cc fuel injectors to maintain a well-balanced air/fuel mixture. The fuel is supplied using the OEM in-tank and two NISMO high-capacity fuel pumps. To keep the six-cylinder engine cool under track conditions, a Tabata radiator was installed. The R34 is equipped with an HKS R Type intercooler that weighs 25% less than the stock intercooler. Although the R34 hasn’t been on the dyno yet, the power is expected to be around the 600 horsepower range at this time. 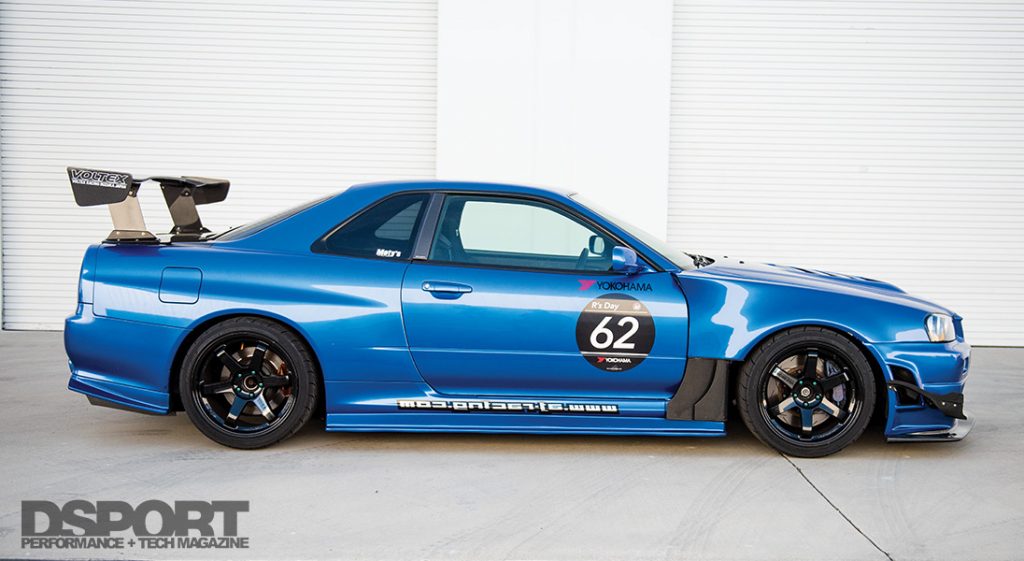 The engine works collaboratively with the OEM Getrag six-speed transmission, with the help of an ATS carbon twin plate clutch and ATS flywheel. The twin clutch can handle up to 800 horsepower. Thanks to its dual nine-inch diameter composite friction discs, it delivers exceptional torque while still maintaining a lightweight structure. To increase the traction on the all-wheel drive R34, an ATS carbon LSD was installed in the front, while the rear kept its OEM V-Spec differential.

To support the power that the R34 is intended to make, Öhlins DFV coilovers keep the R34 grounded around fast corners, with a 10k spring rate and an 8k shock rate. On top of the coilovers, an Air Cup kit by Stance was installed. The kit goes on top of the coilovers. The cups allow the car to ride low; however, you can apply pressure to the cups to raise the car up 50mm to avoid any bumps or obstacles. To keep the car even stiffer on the track, a set of NISMO sway bars were installed at the front and the rear, as well as a Kansai Service tower bar and under brace, which minimize body roll and improve the overall traction around corners. 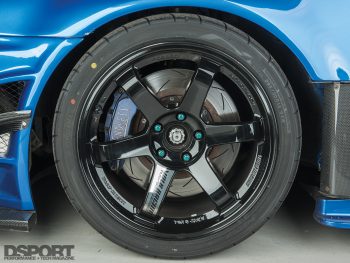 The ’99 R34 is dressed in Volk Racing TE37SL wheels, measuring 18×11-inch with +18 offset and 15mm spacers in the rear. Wrapped around the Volk wheels is a set of 295/30R18 Yokohama AD08R tires. The AD08R tires feature carbon and micro silica material, which enhance both dry and wet grips. The macromolecule polymer blend in the treads’ construction makes for rigid tires as well as reduces tread wear. The GT-R is stopped using ENDLESS Racing 6-piston front calipers, with the help of the OEM Brembo rear calipers, which clamp the pads on 355mm rotors in the front and 330mm rotors in the rear. 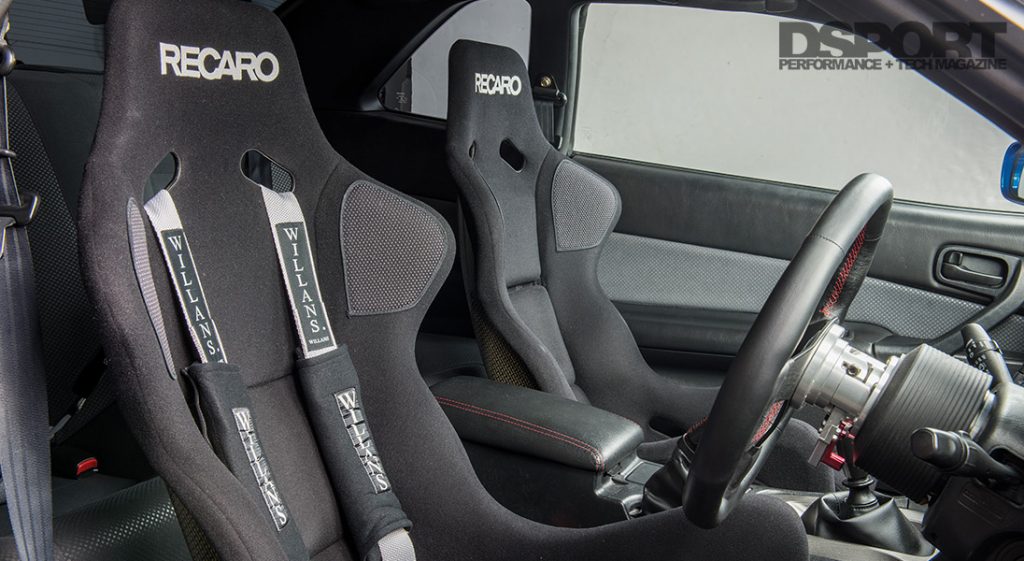 The seats offer a friction grip surface in the shoulder and seat areas, allowing them to be efficient on the track, while keeping a classy look.

On the inside, Recaro SPA seats hold the driver and passenger in place. The seats are made from Carbon-Kevlar fiber material, which offers both safety and quality construction. The driver and passenger are secured in place using Willans harnesses. To monitor the engine’s activities,  HKS boost, water temperature, and fuel pressure gauges display data.

On the outside, the R34 got numerous modifications that play a huge role in aerodynamics, as well as create a body that Charles envisioned well before buying the car. The front features a NISMO Z-tune bumper, with AutoSelect canards and a Carshop F1 splitter to create downforce at higher speeds, and they both function as well as they look. The stock hood was replaced with an AutoSelect lightweight hood. On the trunk lid, a Voltex type 4 1,800mm spoiler keeps the car grounded on the track. Charles kept the iconic OEM Bayside Blue paint color.

Charles has the R34 where he wants it to be now. With just some small modifications, it could turn into his dream car. His plan for the next year is to upgrade its suspension to a NISMO R-tune and eventually put it on the track to test it out. The future upgrades aren’t keeping him from making the best of his R34, however, and he has already driven it from Canada to Laguna Seca. If you’re into the import performance scene, you definitely haven’t seen the last of Charles’ R34 GT-R.