COMPETITION IS A DRIVING FORCE FOR EXCELLENCE. Excellence means achieving nothing less than the best. When challenged by competition, the true competitor finds that extra motivation to push his limits to exceed expectations. It is when aiming for excellence that records are broken and true competitors rise to the top. Quirt Crawford, the owner and engineer at Crawford Performance in Oceanside, California has tuned competition vehicles for just such a purpose, to set records and win races. Involved with Subaru engines since the late 90’s, Quirt has worked hard to extract the best from Subaru platforms for high- performance street and competition applications. This drive and experience caught the attention of Subaru of America. With the release of the 2008 Subaru WRX STI, Subaru anxiously wished to disprove any notion that the new GRB chassis was less competitive than its older brother, the GDB. Subaru’s interest in Quirt’s work led to the development of this GRB STI. Text by Richard Fong // Photos by Michael Ferrara

Quirt began working in his element, the engine bay. With years of experience developing aftermarket components for the EJ257 motor, he began with a complete engine build. He stripped the stock block and replaced the factory pistons and rods with 8.7:1 compression JE Pistons and Crawford Performance (Crawford) connecting rods. These components make the connection to the Crawford stroker crankshaft. This billet steel crank features a 6mm longer stroke, which increases the displacement of the engine to 2,644cc. Satisfied with the shortblock, Quirt moved on to the cylinder heads. For maximum response, the Crawford “time-attack” cylinder head port and polish service was performed to optimize the flow of the heads while keeping the engine responsive. A complete Crawford valvetrain, including stainless-steel valves, valve springs and titanium retainers now fill the heads, while factory bumpsticks actuate the valvetrain. ARP head studs secure the heads to the block, finishing the longblock assembly. 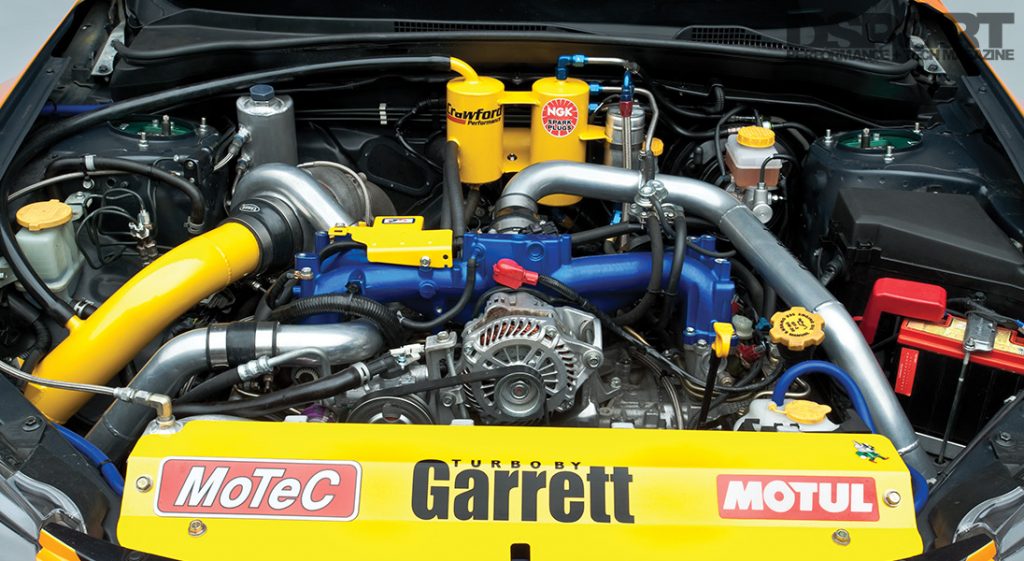 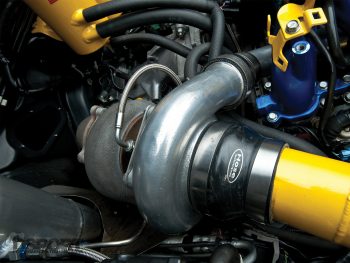 The factory exhaust manifold bolted to the exhaust ports channels high-enthalpy gases to the Garrett GT3582R ball- bearing turbocharger. After driving the turbine, the spent gases flow through the Crawford stainless-steel downpipe and exhaust system to the rear of the GRB chassis. On the compressor side of the turbocharger, air drawn through the Crawford intake system is forced through intercooler hard pipe on the way to the Crawford front-mount intercooler. Once chilled, the compressed air continues on through additional hard pipe before reaching the factory throttle body and intake manifold. As the air enters the intake ports, Denso 740 cc/min fuel injectors spray VP Racing C16 race fuel into the combustion chambers. The Denso injectors receive a steady flow of fuel from the Walbro 255-lph in-tank fuel pump and Crawford fuel surge tank. Controlling the fuel and ignition became the next task. After numerous reflashes of the stock ECU, Quirt decided that a more powerful alternative would be in order. He installed a MoTeC M800 stand-alone engine management system to handle the happenings in the engine bay. With a 44mm TiAL Sport wastegate set to 29 psi, the GRB chassis was connected at the hubs to the Dynapack dynamometer. Once tuned, the EJ engine generated 530 horsepower and 580 lb-ft of torque to the hubs. Relative to the baseline pull of 260 horsepower, this is a 104% improvement over stock.

In anticipation of the high temperatures generated in the heat of competition, a number of safe guards were taken to be certain that reliable laps could be made around the track day after day. The primary heat exchanger, the radiator, was replaced with a Crawford custom radiator. This dual-pass cross-flow aluminum radiator exchanges hot coolant with the engine by way of aluminum coolant lines secured with Adel Wiggins clamps. Additional heat is drawn away from the engine by way of a Crawford oil cooler, while blow-by gases are separated from the crankcase by way of the Crawford oil catch tank. 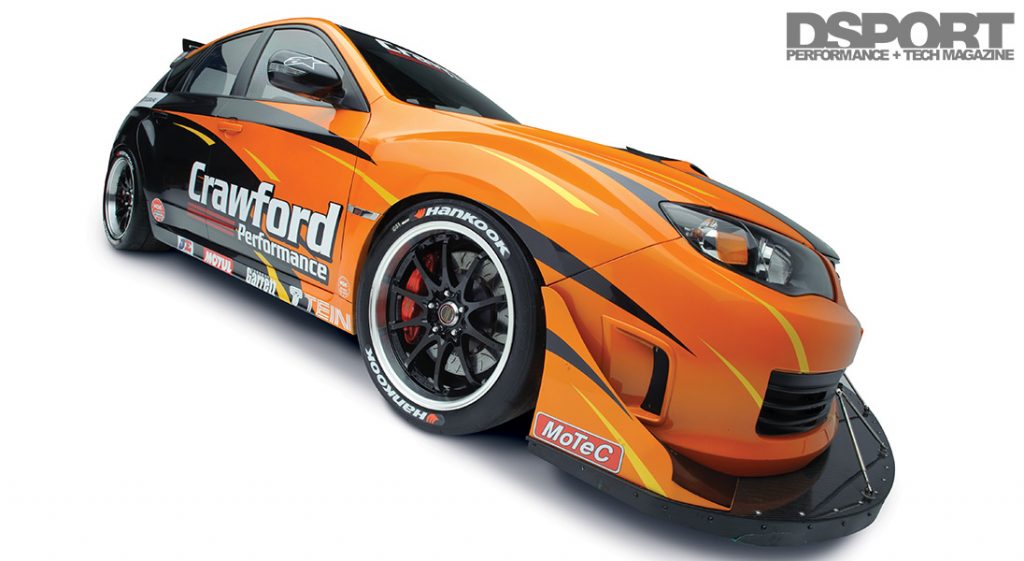 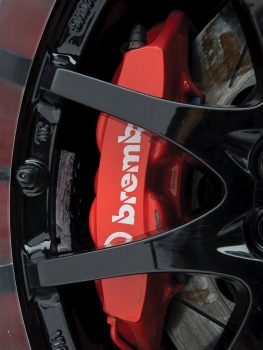 Next to responsive power, suspension and handling rank high on the priority list for a circuit racer. The first set of TEIN Super Racing coil-over dampers and springs in the USA replaced the stock dampers and springs in the wheel wells. With the help of TEIN engineers, the coilovers were revalved to provide superb handling. Quirt selected 16 kgf/mm springs for the front and 14 kgf/mm springs in the rear to keep the GRB chassis planted firmly to the tarmac. Cusco sway bars further improved the GRB’s track manners through each and every turn. Quirt noted that the GRB’s rear suspension had changed from trailing arms to a double wishbone-type. While this design offers improved handling, the aftermarket has not yet stepped up with adjustable links for additional alignment tuning. So Crawford developed adjustable links for the GRB to add another dimension of tuning to the suspension. Filling the wheel wells, Quirt selected lightweight Volk Racing CE28 wheels in an 18×9.5-inch offering and mounted them with sticky 275/35R18 Hankook Ventus C51 compound tires. The STI also runs Ventus C91 compound tires which are the same tires that were used to win the 2008 Redline Time Attack Grand Championship. Behind the front wheels, a Brembo Gran Turismo big-brake upgrade forces the Hankook rubber to bite into the asphalt to shed speed on demand.

Converting the EJ’s power at the crank to power at the wheels required reinforcement of the driveline. An Exedy triple-carbon clutch and lightened flywheel transfer horsepower from the crankshaft to the KAPS 6-speed sequential dog box transmission. The KAPS transmission’s sequential shifting mechanism facilitates faster shifting while the dog engagement allows clutchless upshifts and downshifts for uninterrupted acceleration. Cusco 1.5- way limited-slip differentials replace the factory front and rear differentials to distribute the power to all four wheels. A MoTeC differential controller allows for additional customization of the torque split between the differentials. 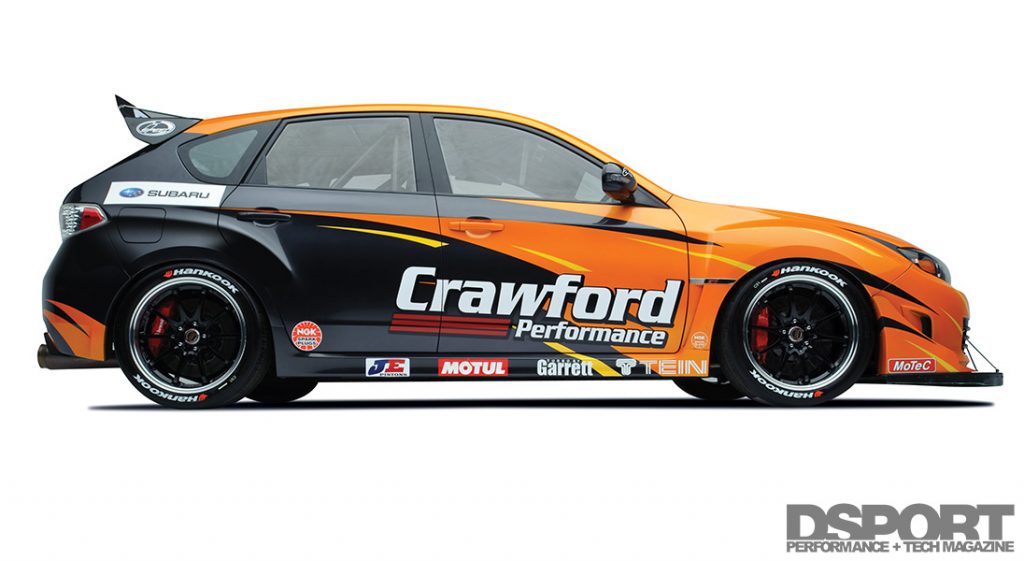 With the engine, driveline and footwork completed, attention shifted to the interior of the GRB chassis. Crawford fashioned a custom 6-point roll cage out of 4130 chromoly steel alloy to stiffen the body and provide an element of safety for the driver. Recaro carbon-Kevlar race bucket seats and Sparco 6-point harnesses secure the occupants firmly in place. 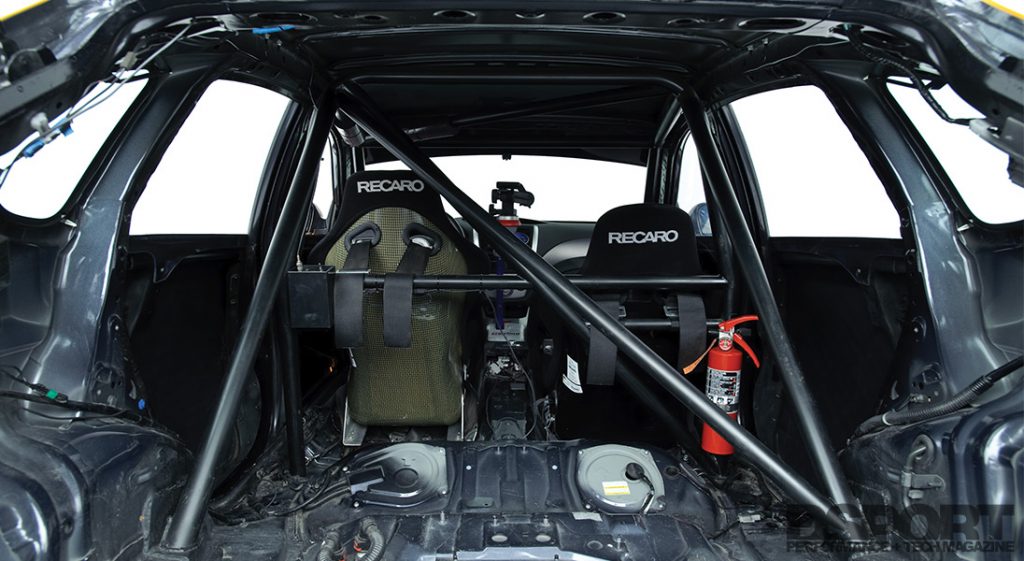 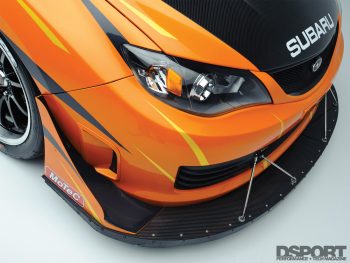 Crawford Performance worked feverishly to complete the development of its GRB. In a mere six weeks, the GRB appeared at the 2008 Long Beach Grand Prix. In subsequent practice sessions, the chassis was fine tuned even further, shaving five seconds off the best time of the previous GDB-generation Crawford STI at Auto Club Speedway and six seconds off at Buttonwillow. At the Super Lap Battle held at Buttonwillow, Crawford’s GRB made a best pass of 1:47.052, which put it in third place for the competition and less than three seconds off of the top finisher. Quirt states, “the superior balance and technology in the GRB clearly surpasses the GDB that he campaigned in the past. The wider body and track added to the overall stability of the car.” Aiming for the top of the podium at Redline Time Attack events in 2009, Quirt promises that this GRB will be more powerful, faster and even better looking for the 2009 season. Based on this STI’s success in 2008, it may just be the car to beat in the 2009 Redline Time Attack series.

See the Spec Sheet and Full Gallery on the Next Page >>>