Anyone that loves speed and acceleration probably loves raw horsepower even more. These traits typify the hardcore sportscar enthusiast, whose passion for a performance machine knows no limits. This is the sort of personality that would buy a globally coveted vehicle, work with a famed tuner to triple its output and then waste no time putting tires onto the pavement. 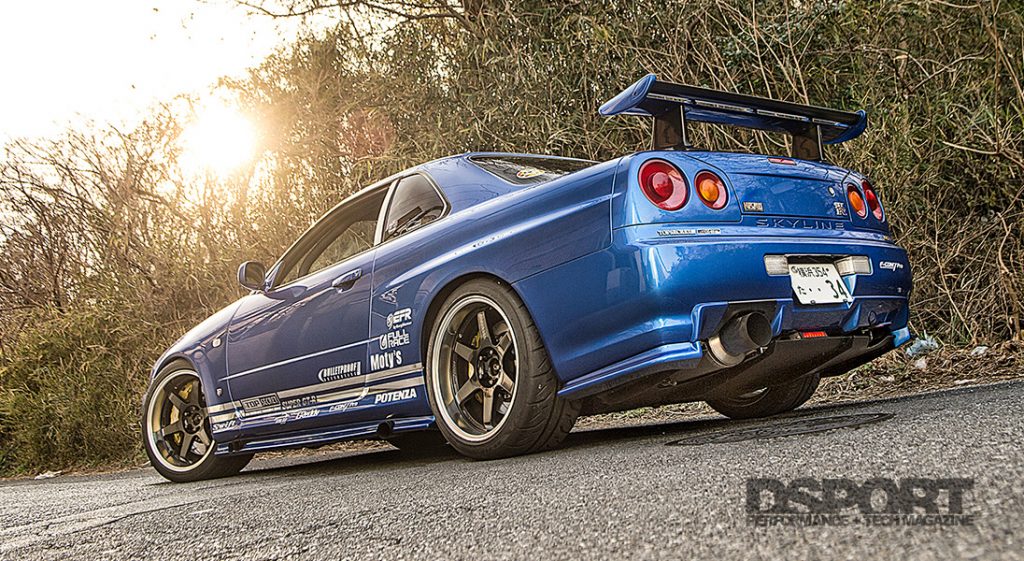 About That GT-R Life 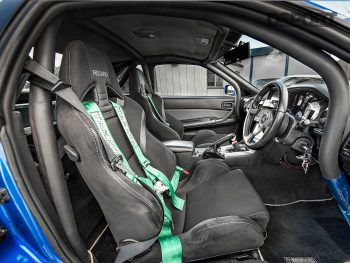 Kenneth Blanck was born and raised in Okinawa, Japan. He grew up a fan of Japan’s automotive culture, embracing drag racing and the underground world of street racing. When Blanck was eighteen, he was drawn to the Nissan Skyline GT-R as its seemingly limitless performance ceiling made it Japan’s supercar. Watching modified R32 GT-Rs dispatching other tuned vehicles further cemented the GT-R into his DNA.

Blanck then went to school and eventually became an IT professional. He eventually landed a job in Tokyo and started saving for his dream ride. His rapid ascent in the company gave him the opportunity to save up for a GT-R. By this time, the Fast and Furious franchise had already reached its fourth installment. Blanck became instantly drawn to the flared fenders and the raw, boxy beauty of the R34 Skyline GT-R, as it had been glamorized by the character Brian O’Conner on the silver screen. With his goal set, the search for an R34 began.

Blanck decided not to seek just any R34 GT-R, however. He shopped for a limited edition Nür Spec II. His search led to a pristine Bayside Blue example on the lot at Phoenix’s Power. This special model was named after the Nürburgring racetrack in Germany, where Nissan invested a lot of time and effort developing the R34. Only available for the 2002 model year, a total of 750 units were ever produced. From the factory, this unit came equipped with an RB26DETT N1 engine, which features additional reinforcement to the block to handle the rigors of endurance racing and higher horsepower than the standard block. It also featured upgraded turbochargers, which raised the Nür Spec’s stock-equipment performance ceiling compared to the standard RB26. 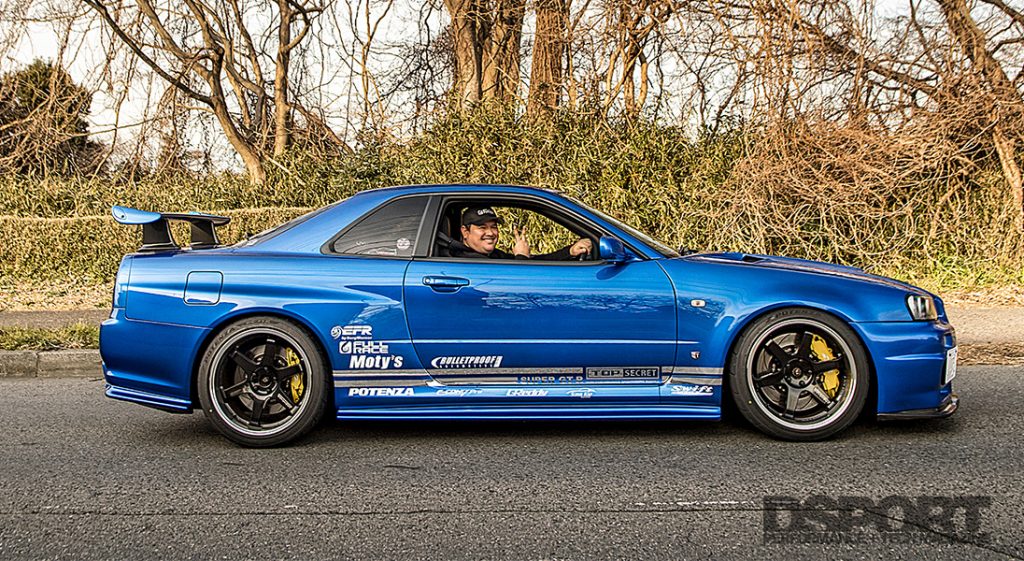 Once in his possession, Blanck wasted little time customizing his Nür Spec. Although he grew up with a passion for drag racing, the closures of several drag strips in Japan influenced his decision to build the R34 for street and circuit instead. He started by dropping the chassis with Top Secret-spec Aragosta adjustable coilover dampers. Inside the wheel wells, 19-inch Volk Racing TE37 Tokyo Time Attack wheels shod with Bridgestone Potenza RE-71R tires replaced the factory rolling stock, while a D2 big brake kit replaced the factory Brembos at all four corners. On the exterior, a Top Secret front bumper and vented carbon-fiber hood give the front fascia a more menacing appearance while helping to manage under-hood temperatures. At the rear, subtle carbon-fiber risers elevate the stock wing plane for a more aggressive appearance. 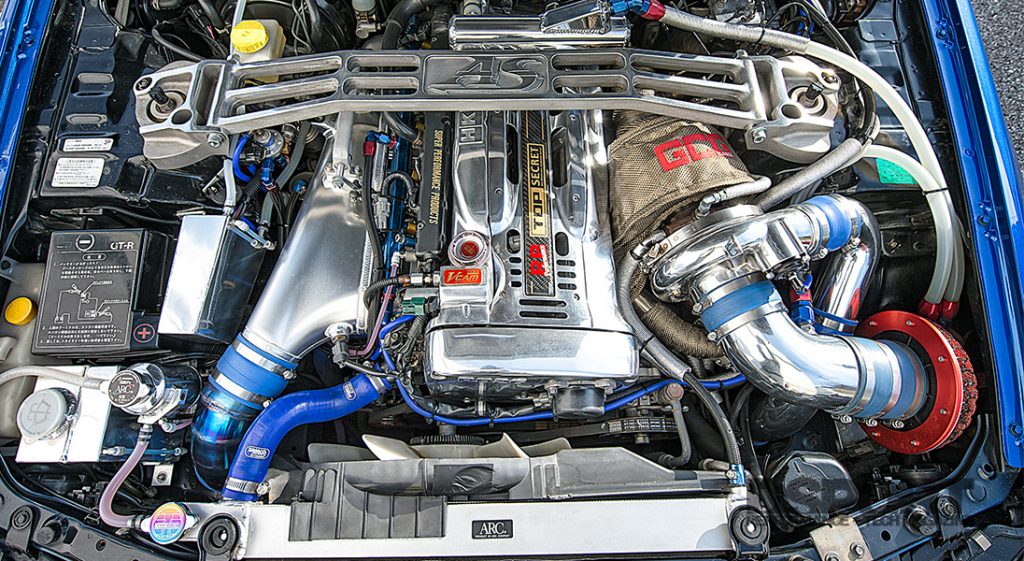 Engine tuning, higher horsepower and hard driving inevitably uncover the limits of the factory equipment, and soon the stock RB surrendered to the track days and aggressive street driving it had been subjected to. This presented Blanck the excuse to fulfill another aspiration, to have his engine enlarged and strengthened by Top Secret. Once removed and broken down, the N1 block was overbored to 88mm before a six-pack of HKS forged aluminum pistons filled the cylinders. HKS H-beam connecting rods make the connection between the larger slugs and the HKS 77.7mm stroker crankshaft, resulting in a displacement increase of 266.9cc which is 10.4-percent over stock. To take best advantage of the increased displacement, Top Secret then addressed the volumetric efficiency of the engine. After reprocessing and porting the cylinder head, the valvetrain was upgraded with HKS’ valves springs, V-Cam Type B camshafts and V-Cam variable intake cam timing system. 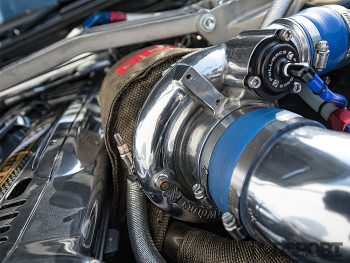 Once the engine build was completed, Blanck looked at his forced inductions options. Despite the Japanese tuning influence he’d become accustomed to, he could not help but notice the advances in turbocharger technology coming out of the USA, particularly the BorgWarner EFR turbocharger series. These innovative turbochargers seemed to offer the best of both worlds, increasing peak output with superior transient boost response. He reached out to Full-Race Motorsports for a twin-scroll manifold solution on which to position a BorgWarner EFR 9180 turbocharger. This manifold includes provisions for dual water-cooled TiAL Sport 44mm wastegates. Top Secret fashioned a pair of dump tubes for the wastegates that exit through the passenger side NISMO side skirt as well as custom piping that channels compressed air from the EFR compressor to the GReddy intercooler. The chilled air leaving the intercooler then flows into a NISMO GT surge tank for distribution to the intake ports by way of the factory individual throttle bodies.

As the air flows past the throttle plates, SARD R35 1,100 cc/min injectors spray atomized 100-octane unleaded fuel into combustion chambers. To regulate the flow of fuel and the ignition timing, an HKS F-CON V-Pro engine management shouldered the engine management responsibilities. With Top Secret’s famed tuner Kazuhiko “Smokey” Nagata at the keyboard, the tables were calibrated for the new setup. Smokey worked his magic on the HKS Pro Writer software and with the EFR turbo regulated to a peak boost pressure of 30 psi, the strengthened RB engine produced peak power on the order of 950ps with 92kg/m torque. This calculates to approximately 936 horsepower and 665 lb-ft torque to the wheels.

Now that the enhanced RB26 engine produced more than triple the factory output, fortification of the driveline was a must. An ATS triple-plate clutch bolted to the crankshaft transfers torque from the engine to the transmission. Although the factory Getrag six-speed transmission handles bolt-on upgrades and modest tuning without issue, the new engine’s output of over 900 horsepower would soon overtax the synchromesh box. To handle the transfer of the increased output to the wheels, a sequential six-speed OS Giken OS88 dog engagement transmission replaced the factory unit. The transfer case splits torque to the front and rear differentials which were upgraded with ATS Carbon LSDs to ensure equal torque delivery to the wheels. 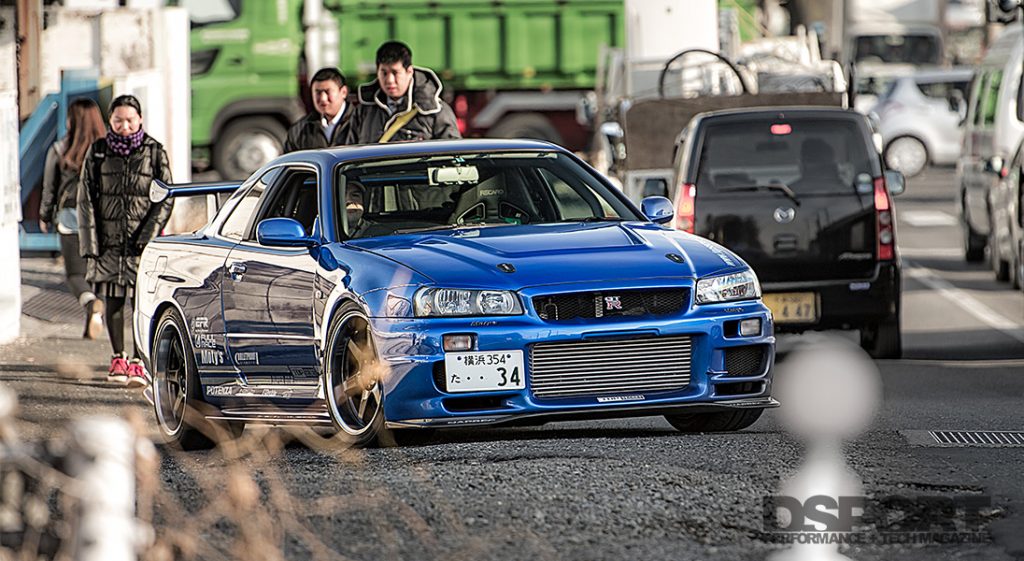 While the details of this Top Secret Nür Spec II aren’t as top secret as some of the files on Hillary’s email server, the top quality of the build sets this already limited edition R34 apart from its peers. As the first (as of the 2016 Tokyo Auto Salon) and only Skyline in Japan to be running BorgWarner’s EFR turbocharger, this R34 further stands out from the rest. It has made appearances at the Tokyo Auto Salon in the Top Secret booth in 2014 and 2016, as well as at the 2015 R’s Meeting at Fuji Speedway in the Club RH9 booth. While representing at events and garnering recognition is great reassurance of his efforts, the greatest reward for Blanck was opening up his R34 at peak boost and reaching 350 KM/H (217.5 MPH) at a speed attack event. The thrill of reaching speeds over 217 MPH could not be quantified for Blanck, but he’s proud to be a member of the Skyline community with a Top Secret build touched by Smokey Nagata.