You don’t know the meaning of handling unless you’ve driven a go kart, a formula racecar, or a Miata. Many like to boast the handling capabilities of a new platform on the market or their personal track car, which very well could be excellent handling cars. The difference with something like a go kart or a track-prepared Miata, however, is that experiencing these vehicles at their limits around a race track is near violent. Stand on the brakes before a corner and you’ll get the wind knocked out of you. Throw the steering wheel into a hard turn and you’ll struggle to keep your head leaned into the corner and looking ahead. We’ve been steadily improving the D’Garage MX-5 Miata’s handling capabilities with bigger brakes, stiffer chassis and suspension components, stickier tires and improved aerodynamics. With all the pieces in place, we converted this fun-to-drive ND Miata into a cornering machine that excels on the race track. 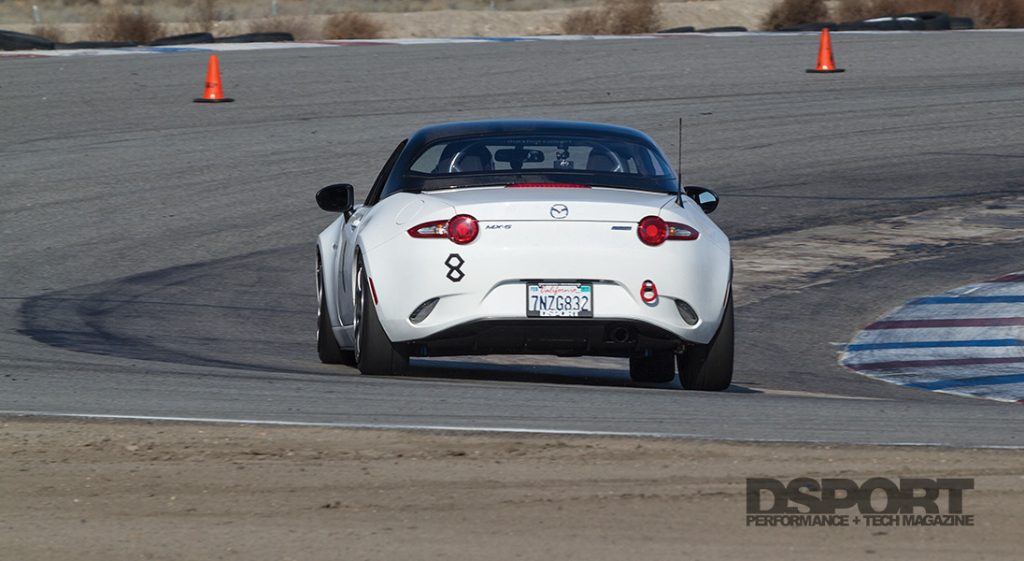 One of the primary focuses in improving the Miata’s handling was first to enhance its ability to rotate. However, nearly every streetcar has a built-in tendency to understeer. This is more of a safety feature than a design flaw, as many drivers pose a greater risk of losing control if the car is too responsive. In the hands of a capable driver who is more concerned about performance, this can be very frustrating. On the track, proper rotation is essential to quick lap times.

The fastest route through a corner is more detailed and complicated than most people may expect. The use of trail-braking allows the car to enter the turn with a later brake point, while shifting the weight off the rear wheels to assist in rotation. In this case, the driver needs to induce a small amount of oversteer as soon as they initiate the turn. As long as this rotation doesn’t call for any major corrections in steering angle or pedal inputs, the car can then enter the turn at a greater speed, line up quicker for a straighter exit and thus allow for earlier throttle out of the turn. 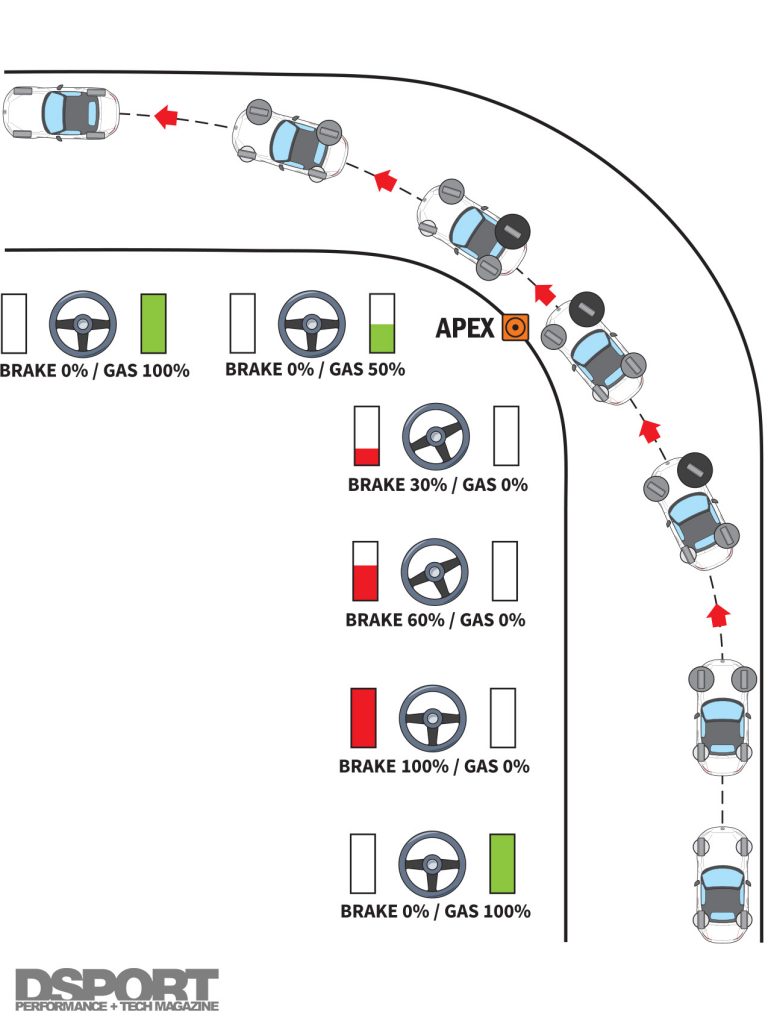 Trail-braking into the corner unloads weight off the rear end, allowing it to very slightly drift on turn-in. This extra rotation allows for faster corner entry and earlier throttle application on exit.

The right setup to accomplish this comes down to chassis and suspension tuning to influence the car to do what we want. Imagine the process of entering a turn on the race track. As the car decelerates, the weight shifts forward and the front end dives down low (pitch). Lateral input on the steering wheel then asks the car to change its forward trajectory toward the inside of the turn (yaw). As the car changes direction toward the turn, its weight shifts to the opposite side as the body leans outward (roll). Improving the car’s braking ability, responsiveness and lateral grip starts with reducing excess nose diving and body roll. This quickens weight transfers and minimizes time needed for the car to change directions, accelerate or decelerate. 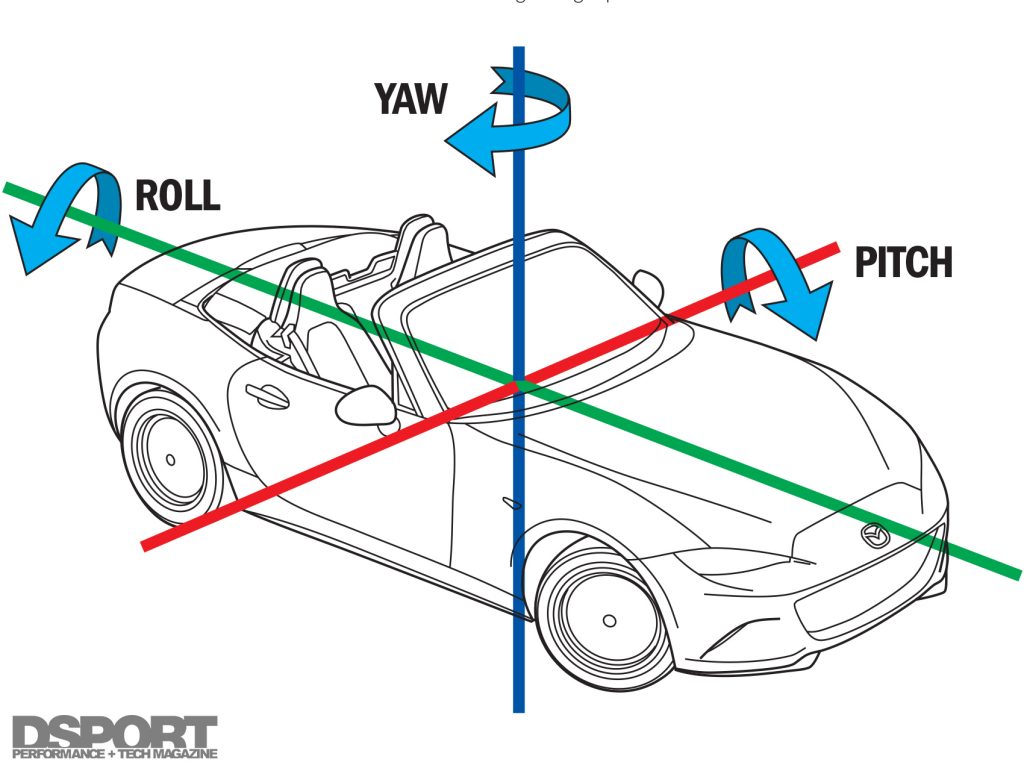 When negotiating turns, the vehicle body and weight constantly shifts and changes. Chassis and suspension upgrades minimize excessive movement in these areas.

The Miata’s lightweight platform, compact size and low power make rotation a mandatory characteristic to lay down quick laps. In order to make the D’Garage Miata more capable in this area, we installed Cusco Power Braces underneath the car and Strut Bars on the front and rear shock towers. This benefits the existing Energy Suspension Hyper-Flex bushings, Öhlins Road & Track coilovers and CorkSport sway bar upgrades that each contribute to improving the car’s responsiveness. The Blackbird Fabworx RZ ND Roll Bar and DG Motorsports Carbon Fiber Hardtop add further safety and rigidity. Together, these items strengthen and stiffen the MX-5’s lightweight platform in order to extract more performance.

After seeing great success with Toyo Tires’ Proxes R1R tires, we mounted a new set of Proxes R888R rubber onto the Yokohama Advan RZII wheels. The 215/45R17 size fit perfectly on the 17×7.5-inch wheels with +38 offset and sported a clean and aggressive look for the car. Even better, these 100 treadwear DOT tires are designed for competition and track use. The giant tread blocks combined with a very soft compound rubber equates to short times to reach operating temperature, as well as improved traction under braking and in the corners. 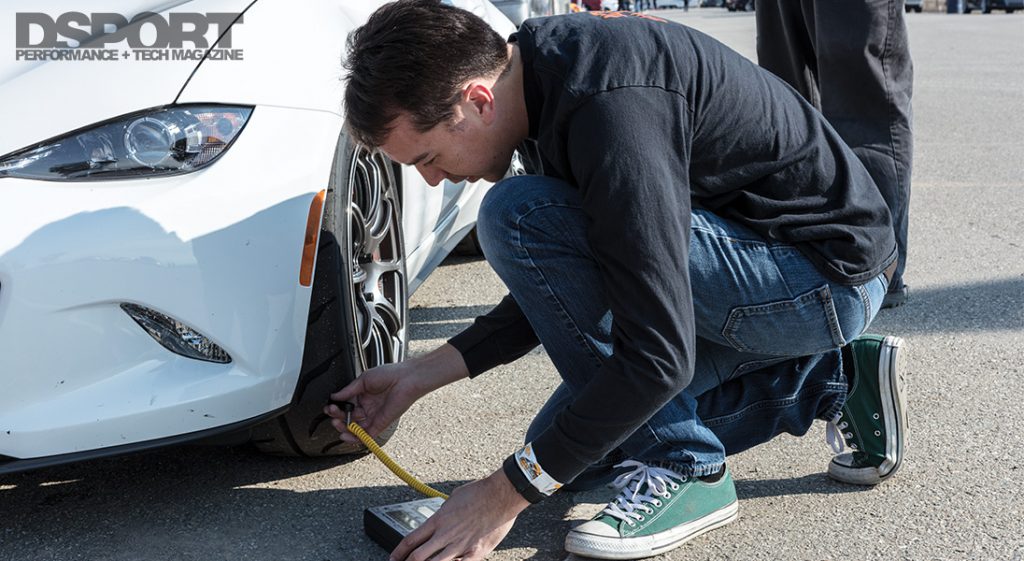 Stickier rubber means better cornering and greater braking potential. Although the small factory brake calipers and rotors with Porterfield R4-S pads served well in earlier stages, the aggressive R888R tires needed a brake system to match. Neo Motorsport four-piston 400 series calipers clamp a set of the brand’s P1 brake pads onto 330mm slotted and vented rotors at each corner. This upgrade sparked conversation with nearly everyone who spotted these massive brakes on the 2,300-pound car, as to whether or not brakes of this size would make any notable difference. We took the car back to Buttonwillow Raceway to find out. 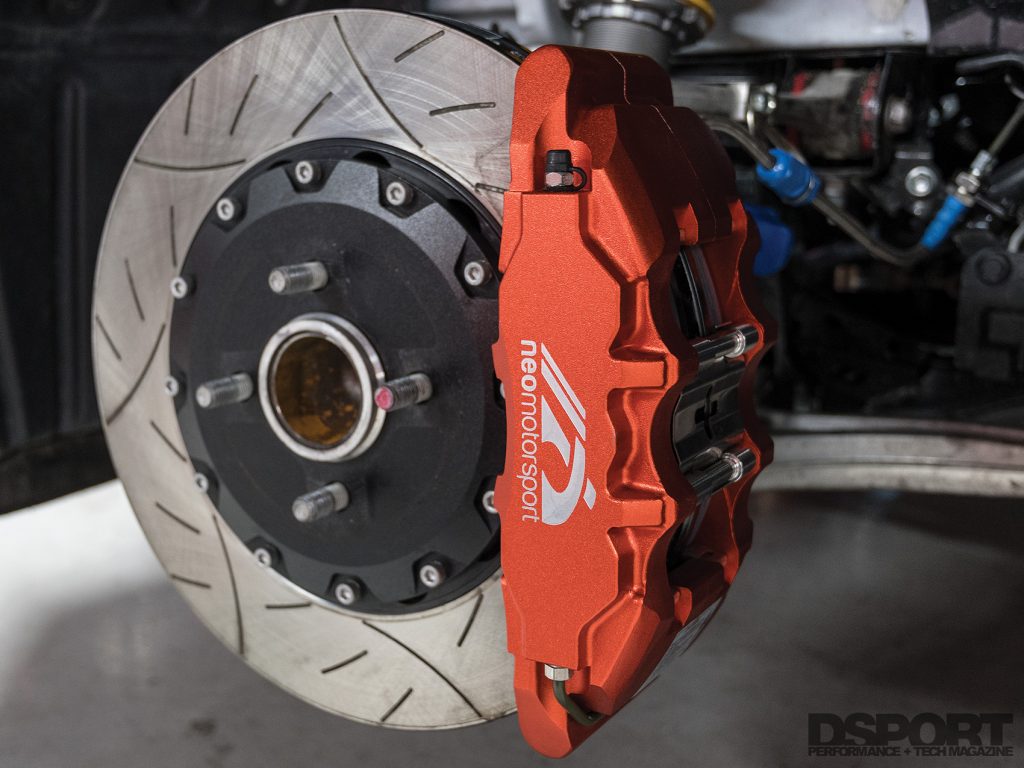 Although useable on the street, the Neo Motorsport 400 series calipers with P1 brake pads are designed for track use and racing

As the D’Garage MX-5 gets closer to becoming a racecar, it demands to be driven like one. Given that the tires operate best between 160 and 220 degrees Fahrenheit, and the brakes at 300 degrees up to nearly 1,500 degrees Fahrenheit, the car required some warming up before being pressed around the track. However, a spirited out-lap quickly brought the components up to temperature. The tires worked to all the other upgrades’ advantage, holding the car through corners and inspiring confidence in the faster sections. Although responsiveness improved over the previous stage track test, the tires still showed small signs of floating on turn-in, as if rolling on soft sidewalls. Regardless, the improvement in traction was unquestionable, especially under braking. The car felt as if no matter how hard I stood on the brake pedal, it would only brake harder, without any heavy lockup or interference from the ABS system. Compared to our previous track test with a best time of 2:07.770, we found a 1.5-second improvement at a 2:06.206. The car found mild gains in nearly all areas of the track in both corner and straightaway speeds, but we brought out one more component in our search for a little more.

When most people think of vehicle aerodynamics, they think of wings, spoilers, canards and splitters. As effective as these pieces may be, the underside of many streetcars is where most of the aerodynamic potential resides. Underneath a car, you’ll find the bottom side of the engine, transmission, driveshaft and differential, chassis and suspension. Each of these non-aerodynamic components are spaced out by numerous large gaps, resulting in all kinds of air turbulence underneath the car. 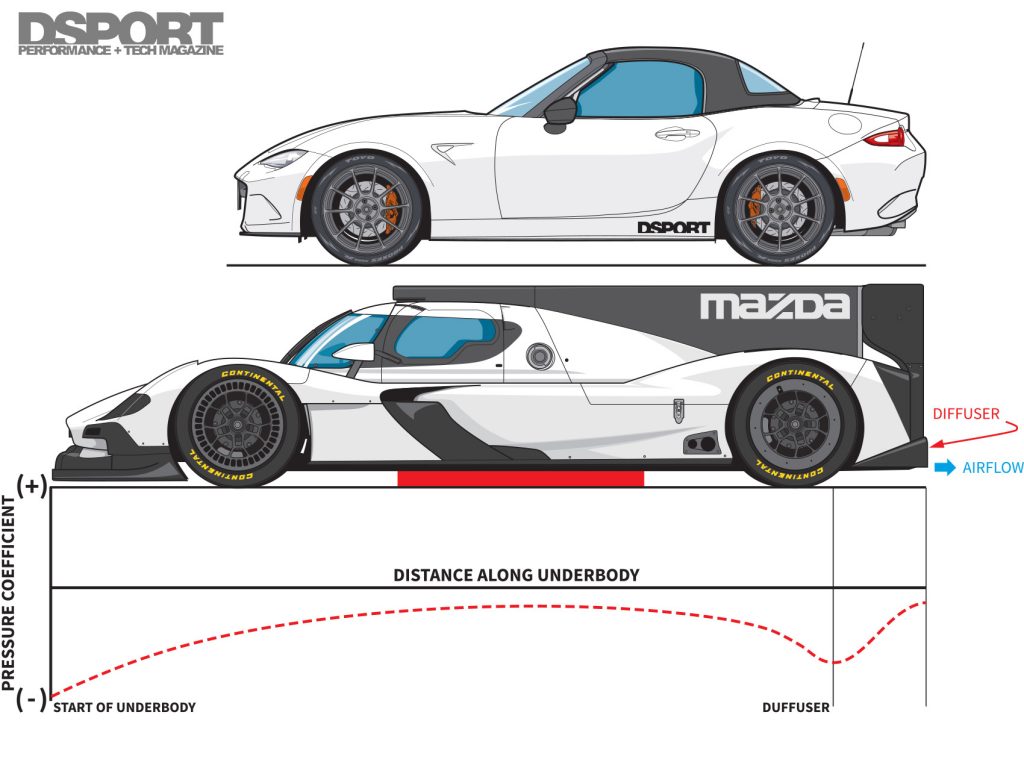 Many purpose-built racecars utilize flat panels and even tunneling systems under the car, smoothing out a path for more efficient airflow. These designs benefit performance even further by creating downforce through changes in air pressure. The flow of air underneath a moving car typically causes lift as it creates high air pressure underneath the car, relative to the areas above the car. Lowering the car and smoothing out the underside reduces this effect. Tunnel designs and rear diffusers expand the distance from the ground to the car’s underbody toward the rear of the car, creating a sort of expansion chamber. As air travels through these areas from the front of the car to the rear, this increases the velocity of air passing through it, decreasing pressure and acting as a vacuum to suck the car to the ground. This results in additional aerodynamic grip. 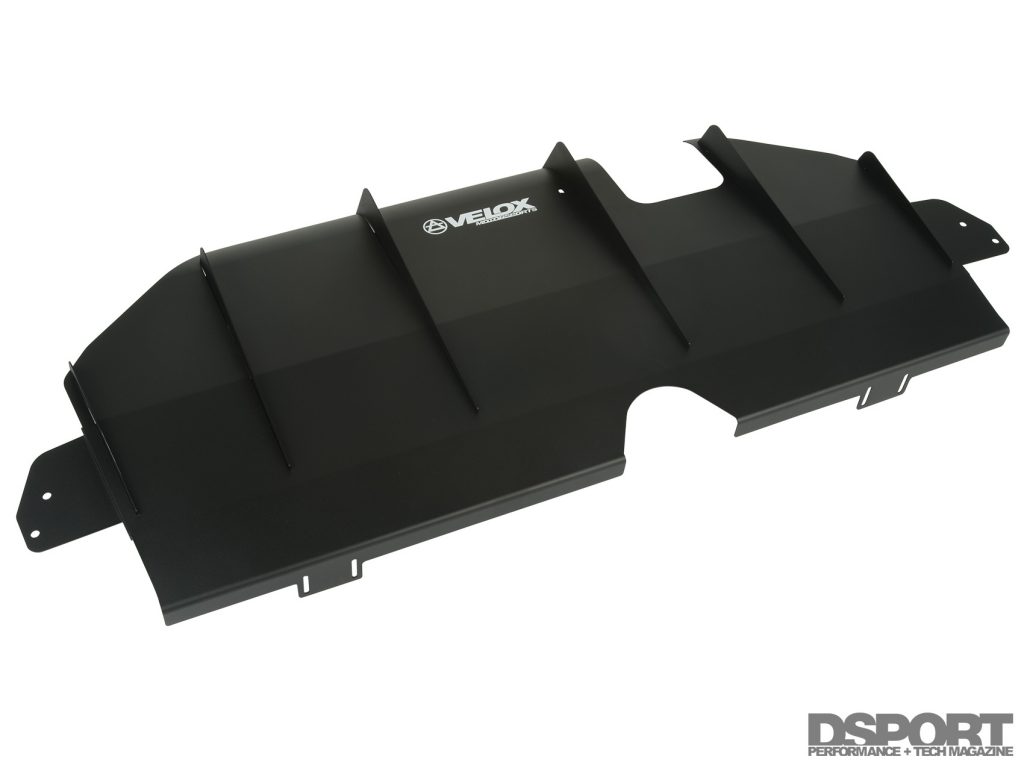 Ground effects components expanding across the entire length of the D’Garage MX-5 would be excessive for street use, however, a rear diffuser provides a simple and affordable solution to reap many of the benefits. We turned to Velox Motorsports for its ND MX-5 Miata rear diffuser to reduce the drag that accompanies the Miata in factory trim, while increasing downforce. This 5052 aluminum component provides a range of adjustability in order to fit around factory or aftermarket exhaust setups, and bolts to the car without any need for modification. This ease of installation enabled us to mount and adjust the diffuser between track sessions with time to spare. 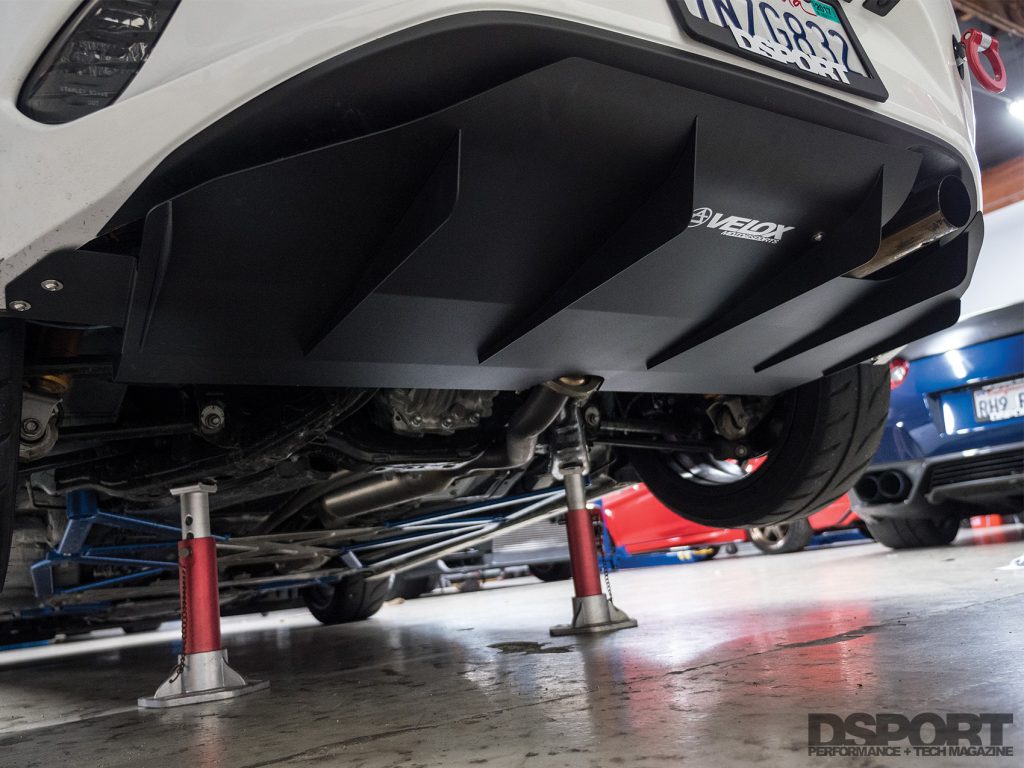 Velox Motorsports claims the diffuser reduces lift on the rear end by nearly 75 pounds at 150 MPH. At speeds close to what you’d find on a racetrack, between 50 MPH and 100 MPH, the anticipated lift reduction is closer to 25 pounds to 50 pounds. Although these numbers may sound minimal, it made a difference on track. The MX-5 with the diffuser installed bested its previous best time of 2:06.206 with a 2:05.764, an improvement of 0.442 seconds. Some variables came into play during this session, such as a rubbered-in track surface and slightly warmer temperatures, but the end result is that the car showed notable gains with the diffuser installed. This especially rings true for Buttonwillow’s higher speed, sweeping corners, as well as on the straightaways and esses. In these third and fourth gear sections, the car realized a consistent 2-3 MPH improvement. Over the course of a few hundred feet at a time, this amounts to precious tenths of a second in reduced lap times. 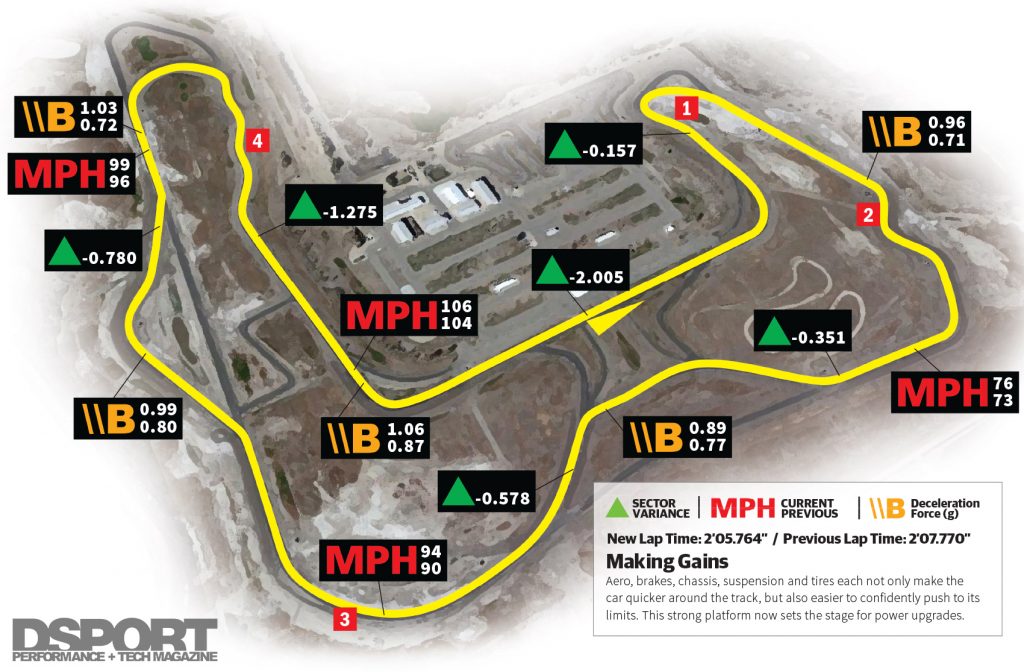 1) In very sharp turns, the diffuser was less effective, but the chassis stiffening upgrades heavily influenced the car’s ability to rotate.

2) The Neo Motorsport brakes paired with the Toyo Proxes R888R tires added great braking ability to the car. Almost no matter how hard the brakes were applied, the tires would not lock up nor would the ABS interfere.

3) The diffuser became noticeable in higher speed bends and turns on track, inspiring much more confidence in staying on the throttle.

4) Higher speed sections of the track quickly added to the overall time improvement, as the car regularly held 2-3 MPH more than the previous track test.

Back on the Power

Since we first started on the D’Garage MX-5, the focus of this build has been almost purely on handling upgrades. In factory trim, the car laid down a 2:14.221 best time around Buttonwillow Raceway’s 13CW configuration. Now, with only 9.91 horsepower and 5.2 lb-ft torque extra, this Miata still earned itself 8.457 seconds per lap thanks largely to its many improvements in handling. Next, we’ll look to adding power in order to break into the two-minute threshold around the track.