Overkill is underrated. But what constitutes overfill? How much is too much? How about a 2.2-liter four-cylinder engine motivated by a T4-framed 74mm turbocharger, an air-to-water intercooler with a 14-gallon tank, a billet aluminum bell housing, and enough powder coating and polishing to buy another car? All of this in a daily driver with a functional air conditioning system and full interior. If you’re going to build a car, build it to the extreme. Is it possible to overbuild a car? Some think so, but Insane Speed and its machine shop Insane Power of Las Vegas, Nevada have redefined vehicle building to the extreme with their latest creation. Text by Richard Fong // Photos by Michael Ferrara and Arnold Eugenio

Insane Speed’s Todd Allen stated, “We wanted to present an aesthetically pleasing car with massive power, a tasteful exterior and full street drivability. This exercise was a demonstration of what we’re capable of producing.” On that note, work began on a pristine EVO IX chassis. The entire shell was stripped down in preparation for a fresh coat of paint in a platinum silver hue. A C-West front bumper and a JDM EVO IX rear bumper along with a handful of carbon-fiber panels lend to a more aggressive appearance without fully giving away the fury hidden beneath its skin. 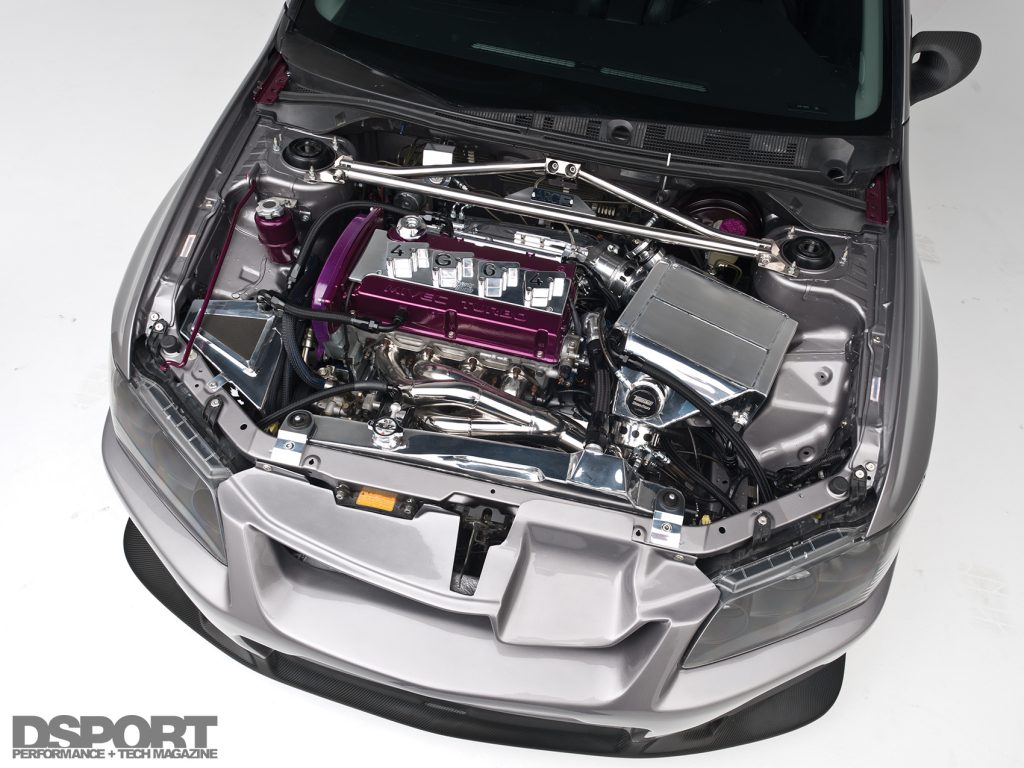 For this build, a 4G64 block served as the foundation. Aiming for lofty horsepower objectives required a carefully selected combination of parts and displacement dimensions. Insane Power installed Darton sleeves into the 4G64 block and then bored and honed the cylinders to 86mm. The freshly-honed cylinders received a set of Insane Speed-specific JE Pistons with proprietary dish, ring design, pin placement and skirt height. GRP Pro-material connecting rods join the pistons to a 94mm Winberg stroker crankshaft. This combination yielded a new displacement of 2,184cc, an increase of 186cc or nine percent. To complement the reinforced block, Insane Power applied its CNC head program to the EVO IX 4G63 MIVEC cylinder head to optimize airflow through the engine. The head was then filled with a complete Ferrea valvetrain lifted by GSC/Insane Speed specification prototype camshafts before it was clamped to the shortblock with ARP L19 head studs. 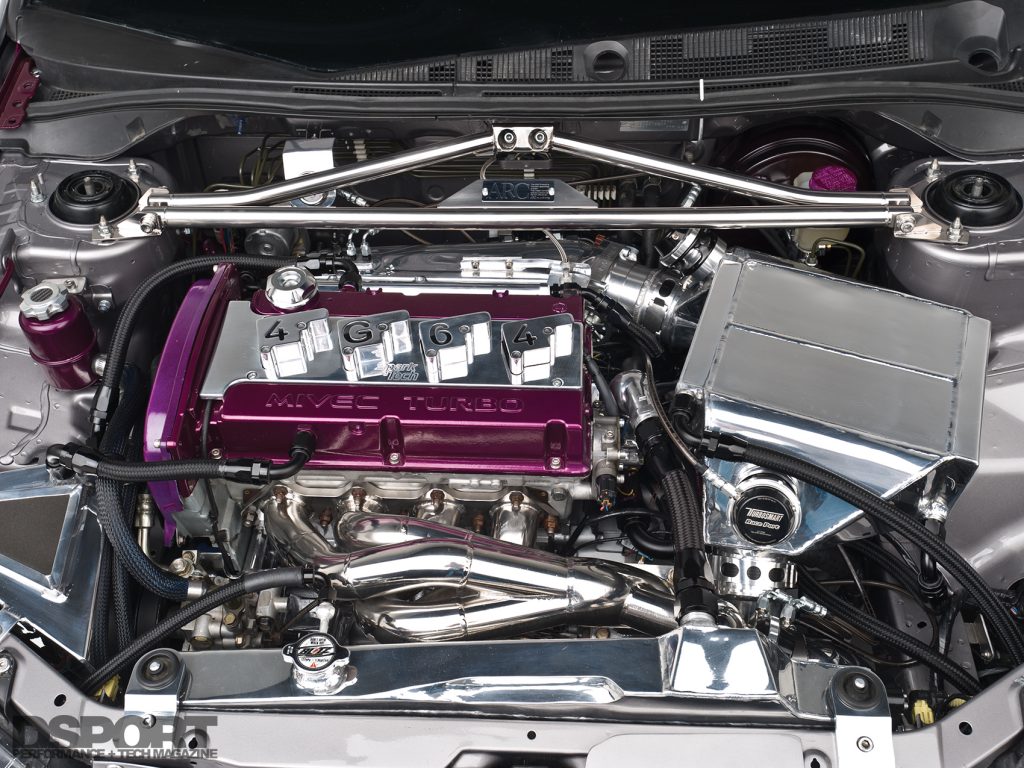 The engine bay is the stuff of genius and madness at the same time. To clean up the appearance of the engine bay and to make space for the forced-induction system, the fluid reservoirs for coolant and washer fluid were displaced from view along with the fuse box. With the longblock dropped into place, extracting the most from the Mitsubishi mill would require a turbocharger capable of delivering the boost pressure to support four-digit horsepower levels. Precision Turbo’s PT6768 turbocharger got the nod for the job. Insane Speed fabricated a sidewinder-style manifold that offsets the turbocharger’s position to the driver’s side. This location put the compressor discharge directly in line with a custom air/water intercooler that makes the connection to the Hypertune aluminum throttle body and intake manifold. Allen proudly pointed out that this manifold permits the use of a 4-inch downpipe while retaining the air conditioning system. 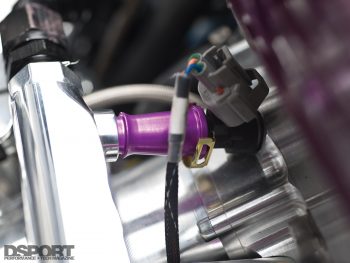 Ethanol with gasoline blends continue to be the choice fuel for high-performance builds despite requiring additional fuel volume. A Bosch 044 in-tank pump supplies E85 to a custom surge tank mounted under the chassis next to the spare tire well to maintain the usable space in the trunk while keeping the ballast and center of gravity low. An in-line pump pushes fuel from the surge tank forward to the Hypertune fuel rail. The rail feeds a quartet of Injector Dynamics ID2000 injectors that atomize the fuel as it mixes with the incoming air charge.

Regulating 2,000 cc/min fuel injectors that are almost five times the size of the stock units requires greater tuning resolution and more flexible parameters to ensure proper and reliable engine function. Therefore, a MoTeC M800 replaced the factory ECU at the helm of engine management duties. With Sparktech’s CDI Pro14 ignition amplifier and coils sending spark energy to the plugs on command, the engine could now be tuned. Insane Speed’s Mike Angel has tuned a number of quad-digit builds. With a MoTeC M800 engine management orchestrating the extreme components assembled for this project, eclipsing the four-digit mark should be no problem once strapped to the dyno. 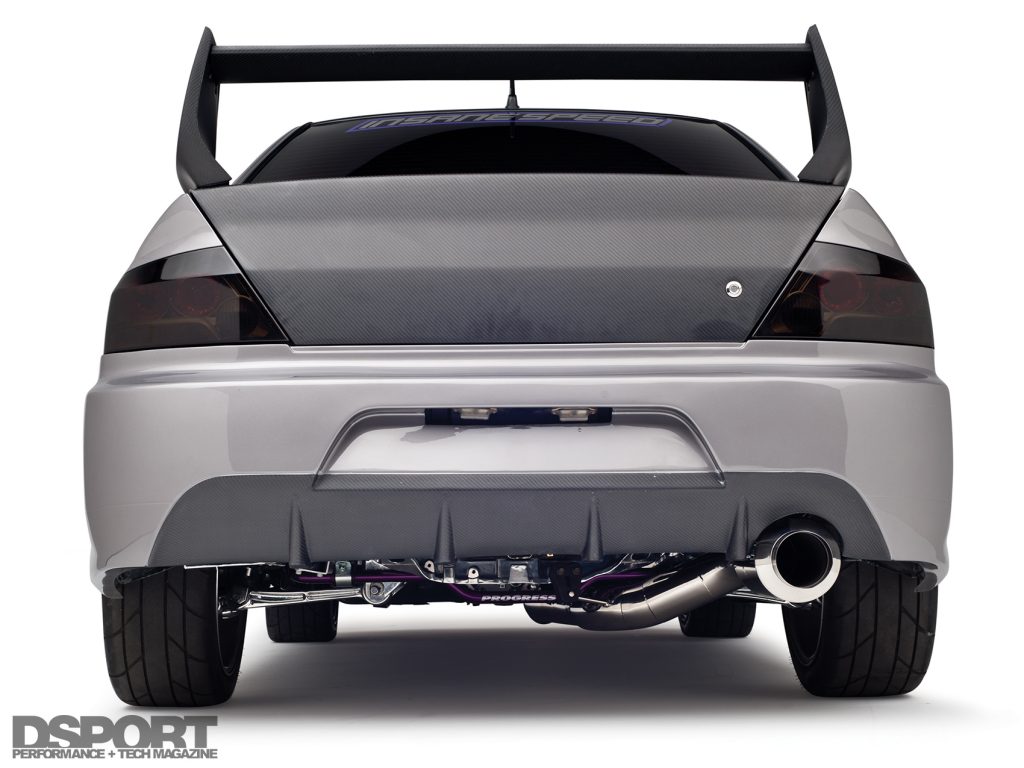 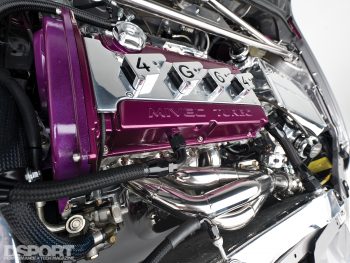 Insane Speed’s extensive experience with high- powered 4G63 and 4G64 engines led to the development of proprietary engine specifications unique to Insane Speed engine builds. Compared to the smaller 4G63, the 4G64 has a taller deck height, a 12mm longer stroke and a 86.5mm (1.5mm larger) bore. Allen commented, “For this build, the 4G64 was chosen for its deck height, but it was sleeved so that the bores could be reduced to 86mm (a proven and reliable bore size in our experience.) Our piston designs, pin placements, ring design, rod ratio and stroke length are the result of many studies of engine performance on the dyno. We were focused on extracting more torque from the engine than anyone else has been able to reliably produce with 4G63 and 4G64 engines.” 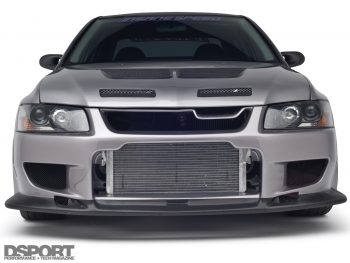 Forced-induction engines rely on a heat exchanger to reduce air charge temperatures. The most common is the air-to-air type, but an alternative is the air-to-water intercooler. Air-to- water intercoolers tend to be more efficient at heat exchange but add weight and complexity. These drawbacks can be summed up by the amount of water in the system (at 8.34 pounds-per-gallon), the lines, the reservoir, the water pump, ancillary wiring and support hardware. But in the case of Insane Speed’s EVO, the benefits outweigh the drawbacks. To ensure consistent performance even in the Las Vegas triple-digit summers during rush hour traffic, the air-to- water intercooler provides consistent intercooling because it does not rely on ambient air to draw heat away from the intercooler core. 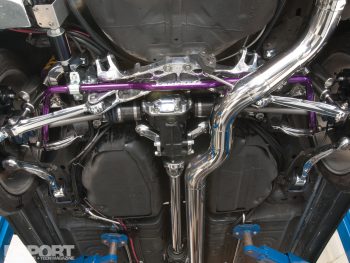 Modern CAD and CNC machining techniques have made custom parts manufacturing more attainable now than ever before. Insane Power put these resources to the test, designing and cutting a transmission bell housing from a billet of aluminum. Why would one need a billet housing? When combining sticky tires with an engine producing torque at and above 700 lb- ft, Allen noted that the factory cast aluminum bell housing is acted upon by intense stress, inevitably leading to cracking and failure. The billet housing offers increased strength, rigidity and capacity to accommodate the additional torque produced by the engine combined with the resistance that improved traction. 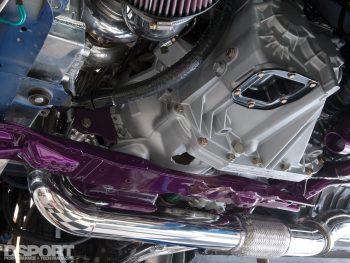 More power is terrific, except when it triggers a chain reaction of failures on the way to the tires. Subjecting any driveline to more than four times the factory output is a recipe for disaster, warranting upgrades to handle the increased performance. For reliable torque transfer from the crank to the transmission, a Carbonetic triple- carbon clutch with flywheel link the engine to the reinforced Sheptrans stage-5 transmission. Once the gears are turning, a Cusco LSD splits power between the front wheels as a Quaife differential in the transfer case sends power to Cusco differential at the rear of the chassis. The clutch pack-style limited-slip differentials spin Drive Shaft Shop stage-5 axles that turn XXR 521 wheels mounted with Mickey Thompson ET Street Radial II tires.

Insane Speed has produced plenty of 1,000-plus horsepower machines of different varieties including Gallardos, 911 Turbos, GT-Rs and EVOs as well as several major developments and pet projects. While this extreme Evo project hasn’t had the chance to prove itself against foes on the street, the strip and the road course, its purposeful design and intuitive layout nearly justify the excessiveness of the set up. Or, perhaps overkill isn’t overkill afterall. It’s just right.