Too many enthusiasts choose to spend money and throw parts at their car until something good comes out of it, without doing their research and without a goal in mind. The ones who do it right, however, know where they want the car to end up and can therefore map out the plan to get there. Yoshihiro Kikkawa and the highly-acclaimed shop Advance laid out the objectives for Kikkawa’s BNR34 Nissan GT-R early on, aiming to race the clock at Fuji Speedway. With this end goal in mind, the team analyzed the R34’s strengths and weaknesses, and set out to turn the car into the ultimate street and time attack hybrid. 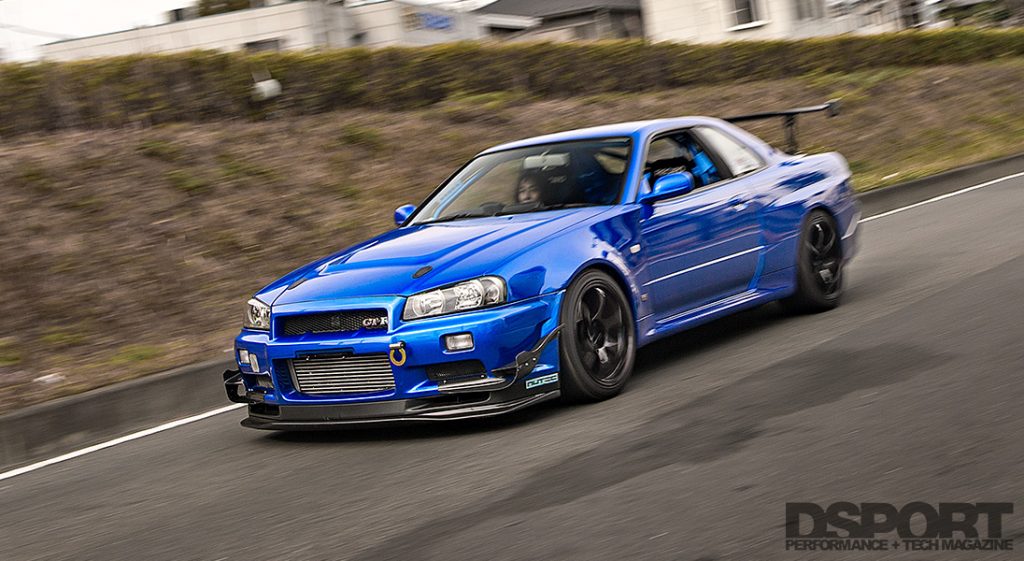 Kikkawa has long held an appreciation and desire for cars wearing the GT-R badge. Out of the Skyline family, however, the R34 in particular was his ultimate target. Nearly two decades since its first unveiling, the R34 Nissan GT-R still stands as many enthusiasts’ most desired Japanese sports car, making the search for a clean example all the more difficult. Eventually, in December of 2013, Kikkawa tracked down a pristine condition 1999 GT-R in its original Bayside Blue color. Although Kikkawa planned to occasionally use the car on public roads, he intended to stretch its legs on a regular basis at the race track. This led him to Advance, a team of builders in Japan who specialize in performance vehicle services and tuning.

Haven’t heard of Advance? The Japanese shop resides in Yokohama, Japan, and has handled numerous famous builds. Many of these have been featured in past issues of DSPORT. OE names like Honda, Mazda, Nissan, and even Porsche all pass through the shop for everything from simple alignments to full race car builds. With Kikkawa’s BNR34 in Advance’s trusted hands, the track car build began. 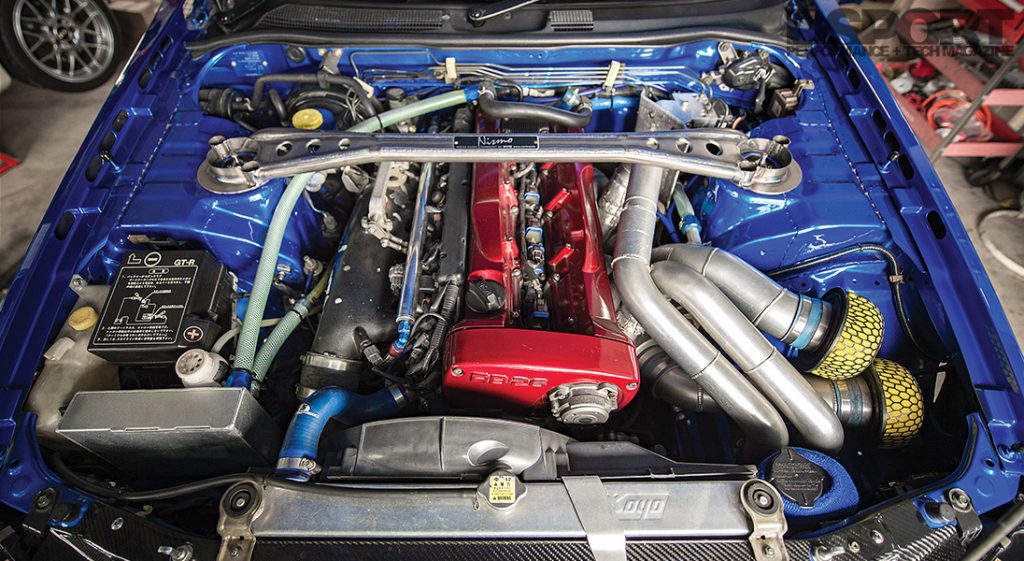 The Advance team took the BNR34 into the shop, plucked out the RB26 power plant, and began the teardown. A bare RB26 block then laid the foundation for the new collection of engine internals to go in. HKS was the theme for the rotating assembly, as the brand’s crankshaft, connecting rods, and pistons fill out the bottom end. A TOMEI Powered 1.2mm head gasket seals the head to the block, while HKS cams, valves, and valve springs manage the intake air and exhaust gases. Higher valve lift and longer durations means more air, and more air calls for more fuel. To this end, a set of SARD 850cc injectors complete the air and fuel mixture for combustion with the help of NGK Racing #18 spark plugs. In the interest of optimizing timing and engine components, an HKS F-CON V Pro engine management system takes the helm in maximizing the car’s power ability. 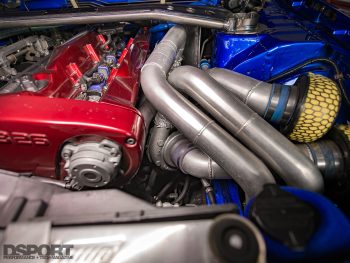 The more capable engine internals open the door for a turbocharger upgrade. A pair of HKS GT2835 turbochargers spin up to deliver 19.9psi of boost under the management of an HKS EVC6-IR 2.4 boost controller. Charged air from the turbochargers pass through a Trust front-mount intercooler to improve the forced induction system further. With all the pieces in place and the engine running at full tilt, dyno tests show peak power delivery to be in the tune of 690 horsepower and 506 lb-ft of torque at all four wheels.

On the race track, these power levels demand an effective and still controllable means of delivery. Beyond the demands of the car, Fuji Speedway contains a massive straightaway but is also filled with tight corners where letting the RPMs fall out of the power band can cost precious seconds. The team elected to drop the factory gearbox in favor of a Holinger six-speed sequential transmission. An ATS Triple Disc Clutch ensures that none of the 700+ crank horsepower and 500+ lb-ft of torque are lost to slip. This combination enables significantly quicker shifts than a standard H-pattern, as well as reduced risk of missing gears or excessively slipping the clutch. 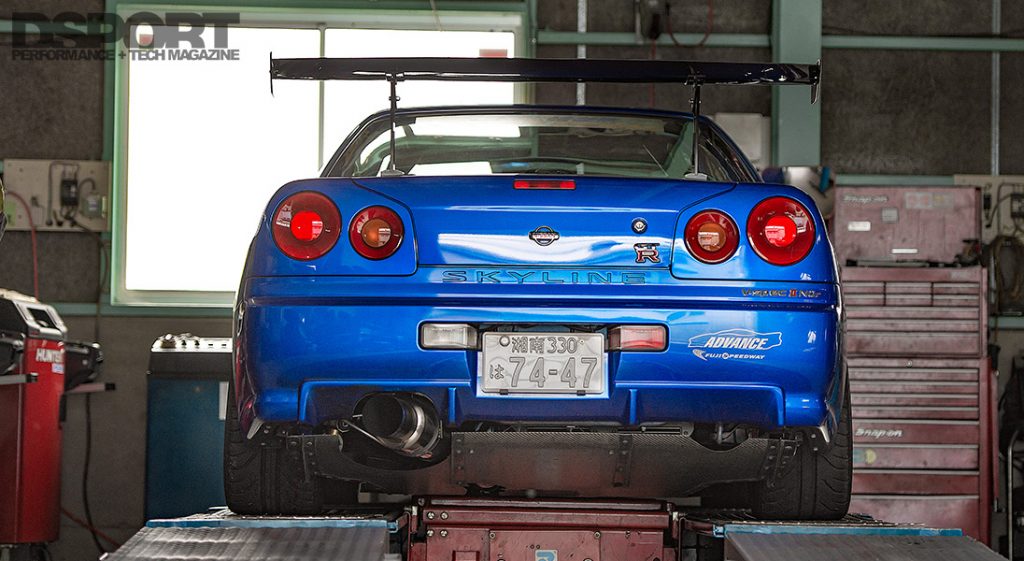 The bends and curves of Fuji Speedway require cars and drivers to carry momentum to achieve quick lap times, which can be a tall order for a near 3,500-pound AWD monster. AWD configurations naturally cause understeer, primarily in mid-corner, due to the workload of the front wheels to both turn the car and push it forward. Many poor handling characteristics can actually be improved with the help of effective differential systems. To this end, the Advance team installed OS Giken Super Lock limited-slip differentials to optimize the power distribution to the most effective wheels. With the help of the limited-slip differentials’ locking ability, it also stabilizes the car under braking for corners.

The second hurdle to address in terms of handling is the car’s suspension system. At 3,483 pounds, the BNR34 is hardly a lightweight sports car. This poses a greater fight against inertia when attempting to throw the car into corners. Given the need for improved weight transfer characteristics and road surface damping, the Advance team equipped a set of HKS Hipermax IV SP coilovers to meet the demands of road-going comfort and track performance. The dampers allow for 30 steps of adjustment to fine tune for any conditions, while the pillowball upper mounts provide for more accurate steering and feedback to the driver.

The car’s heavy weight puts extra work on the braking system during track sessions. This potentially results in higher heat, less consistent braking, and damage to the brake components. A set of Endless Mono 6 POT Sports calipers and rotors fill in the wheel wells, ensuring higher heat tolerances and consistency to better serve on the track. With the help of six pistons in the calipers and the large slotted rotors, pad wear and effectiveness both improve. 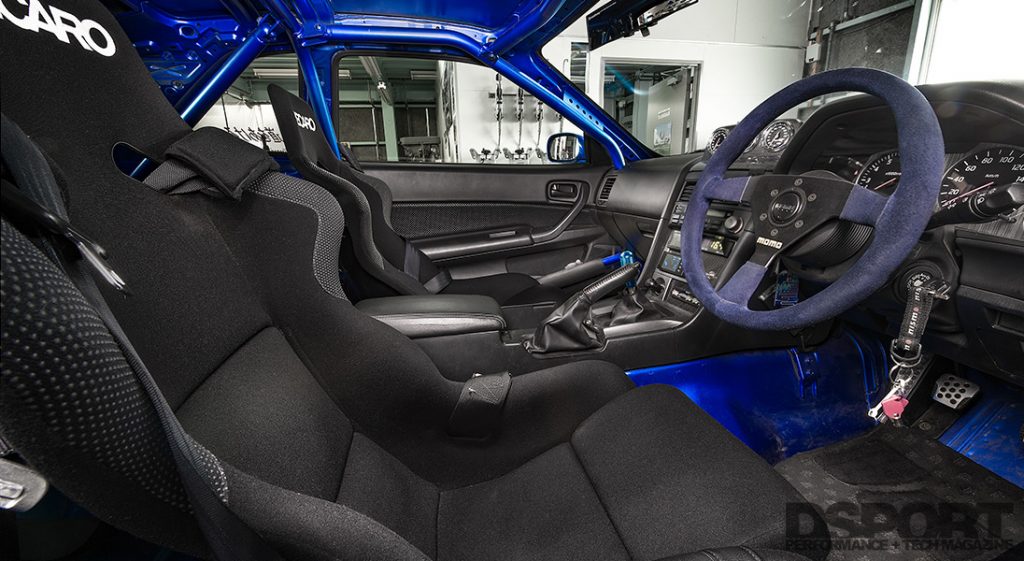 The benefits of the suspension and braking upgrades can’t be realized without the right rubber, so Kikkawa opted for a set of Goodyear Eagle RS Sport tires in size 265/35R18. This UHP tire emphasizes a high grip compound with a rigid sidewall and tread structure to deliver high responsiveness. However, this tire primarily serves as Kikkawa’s daily driver and occasional track day rubber. When he sets out to turn new personal bests at a time attack event, a set of Yokohama Advan A050 R Spec tires mount onto the Advan wheels to provide even more traction.

Once the professionals at Advance had handled the power and suspension on the BNR34, they’d have to address the safety aspect of track driving. They stripped down the interior to weld in a full six-point cage with pillar gussets and cross bars for maximum safety. The stock seats came out for a pair of Recaro Profi racing seats and Sabelt four-point harnesses for not only improved safety measures, but for more accurate vehicle feedback for the driver. On the dash, a custom carbon fiber panel houses an HKS Circuit Attack Counter and Neko AF700 lambda meter to display lap times and A/F readings. Although the inside of the car saw a complete reconstruction, it still resembles that of a stock street GT-R. The door panels, much of the dash, the primary gauges, and even the center console all remain factory.

The outside appearance follows suit in retaining a very stock look. However, it is dressed up with functional aero items including Autoselect Canards, NISMO Z Tune front fenders, SARD rear spoiler, and a factory V-Spec rear diffuser. Aesthetically, these items piece together a package that doesn’t change the look of the R34, but emphasize the car’s existing lines. 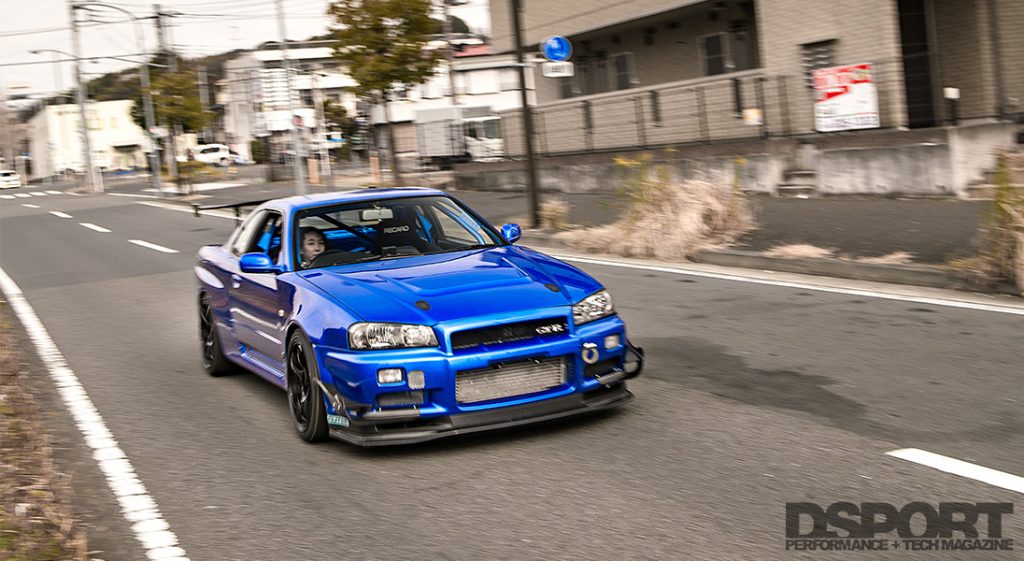 Since the BNR34 build rolled out of the Advance shop, Kikkawa has regularly made his way around city streets with occasional jaunts to Fuji Speedway. So far, he has achieved a best time of 1:57.5 around the circuit, placing it among a short list of the fastest production-based cars to turn laps there. However, Kikkawa doesn’t feel that he is finished with the build yet. As he has had time to dial in the car’s setup and his driving, he’s become more comfortable tracking the car in its configuration with nearly 700 horsepower. According to Kikkawa, this still isn’t enough. We’ll be keeping a close eye on Kikkawa and his BNR34 build, as he steps up the car’s power levels higher in an effort to trim even more time off of his laps around Fuji Speedway.