PERFORMANCE OR LOOKS. IS ONE MORE IMPORTANT THAN THE OTHER? Do you buy an exhaust and intake or a new set of wheels first? Every tuner has a different list of priorities when it comes to a vehicle buildup. While the original plan for a buildup may not include addressing both performance and looks, nearly all projects reach a point where a car performs too well to look stock or looks too good to run like a stocker. Such was the case with this Nissan Silvia S15. Text and Photos by Richard Fong 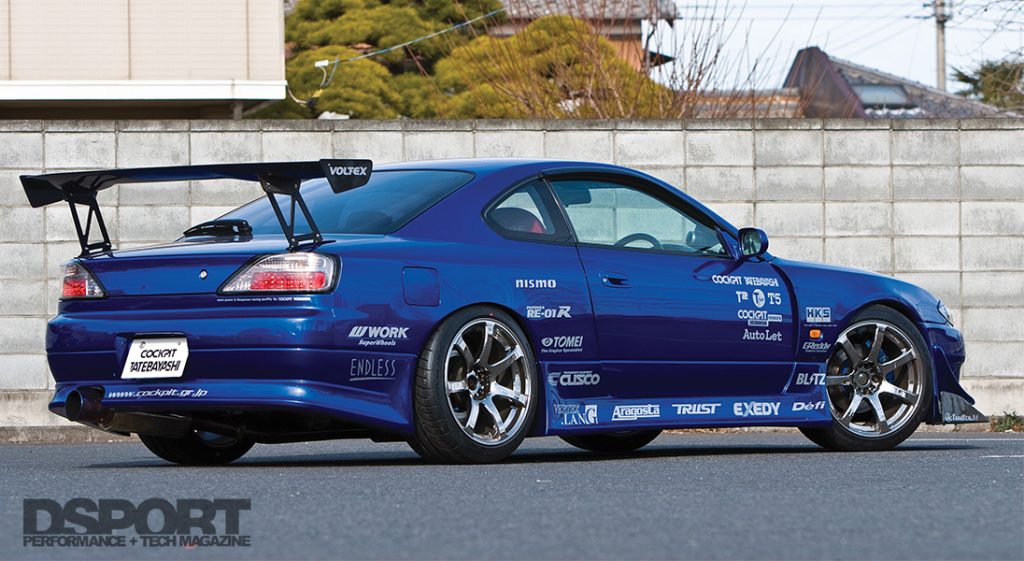 Tomoya Ito was drawn to the Nissan Silvia S15 for its smooth lines. With this S15 project, Ito planned to build the car starting from the outside, setting aesthetics as his first priority. Once the body tuning was complete, a suspension upgrade was planned to “finish” up the project. It was Ito’s belief that he would be content with the stock SR20DET engine for his daily commute.

After looking at innumerable varieties of aero kits, the Vertex Lang design caught Ito’s attention. Of the three kits that Vertex offers for the S15, the Lang kit is considered to be the second-most-aggressive style. With GP Sports wide front fenders, paint-matched Vertex canards on the front bumper and more pronounced ground effects, the Lang design complements the factory lines while giving the body its own identity. Once the kit was fitted, the shell was then finished in a metallic-blue paint borrowed from the S15’s big brother, the Skyline GT-R. A Vertex carbon- fiber lip spoiler and under tray were installed to add to the frontal aero- dynamics. Out back, a carbon-fiber Voltex Racing Type-II GT wing adds downforce to the chassis for improved handling. 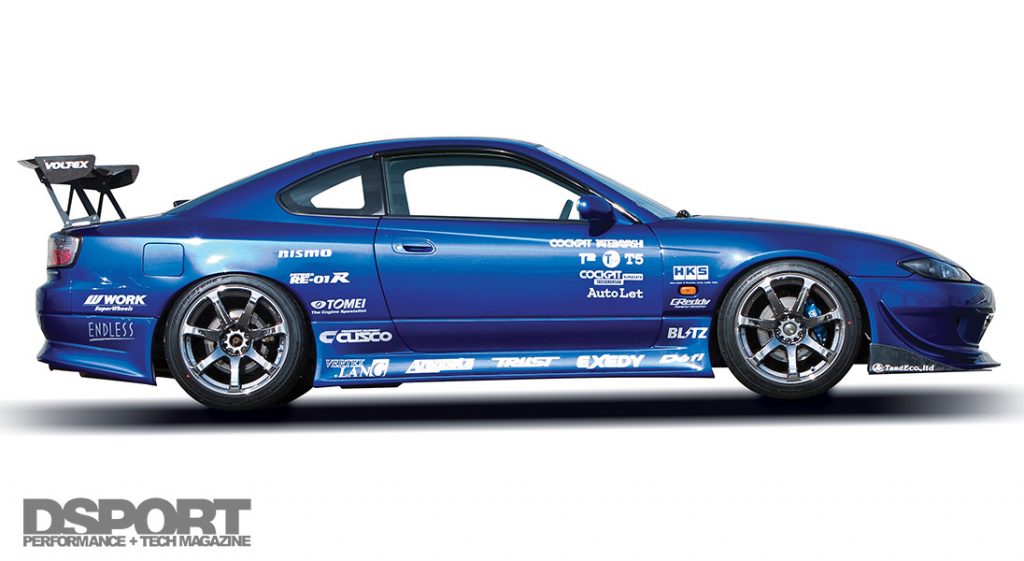 Silvia S15s are well known for being able to be tweaked for superior handling. The balanced chassis of the S15 makes it a top choice of motorsports tuners in a variety of arenas. Sparing no expense, Ito chose a set of Belgian-made Aragosta coilovers with 8 kgf/mm springs in front and 6 kgf/mm springs in the rear to lower the stance of the Silvia and offer a greater range of adjustability. To provide the correct alignment with a lowered stance, NISMO lower control arms replaced the factory counterparts in the front. In addition, Cusco toe rods, tension rods and rear lower control arms provide even further alignment adjustability to the chassis.

After taking the Silvia to the track for the first time, Ito realized that his street- built Silvia would need more power to be competitive. Understanding that a plan and limit needed to be set on the powerplant, Ito decided to generate maximum reliable power with the factory shortblock and unported cylinder head. In this plan, making more horsepower would require additional airflow and fuel delivery. In preparation for greater boost levels, an HKS 1.2mm head gasket was chosen to seal the head to the block. This thicker gasket drops the compression ratio, provides a superior seal and allows the engine to realize greater cylinder pressures. 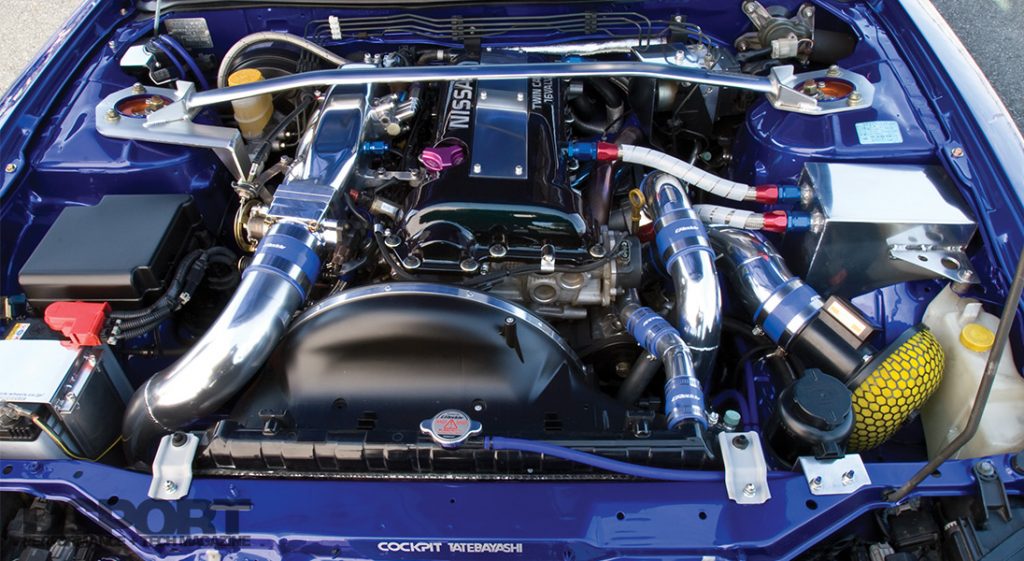 In the unported head, a pair of HKS 264-degree cams now actuates the factory valvetrain. The HKS cams provide greater lift and longer duration compared to the stock bumpsticks. Opening the valves higher and holding them open longer helps to maximize the volumetric efficiency of the engine. From the exhaust ports, spent gases are channeled through a TOMEI POWERED Expreme exhaust manifold that feeds an HKS GT-RS turbocharger. Once the exhaust gas spins the turbine wheel, the spent gases are routed through a TOMEI POWERED O2-sensor housing and a GP Sports EXAS exhaust system. 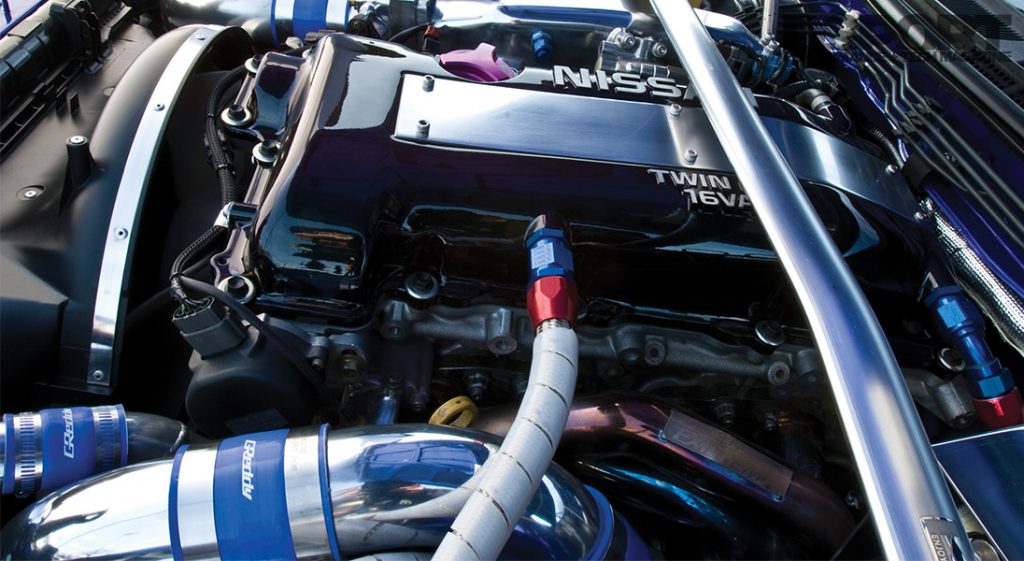 On the compressor side, ambient air is drawn through an HKS Racing Suction intake system on the way to the compressor. Since the compression process heats the charge air, reducing the temperature of the intake charge becomes essential for making power and reducing the possibility of engine-damaging knock. A GReddy Spec-R front- mount intercooler system rejects the heat from the intake charge and increases the density of the air en route to the intake manifold. To remedy the bottleneck caused by the original 50mm throttle body, a 70mm N15 throttle body from a Pulsar GTi-R was selected to regulate the airflow to the engine. 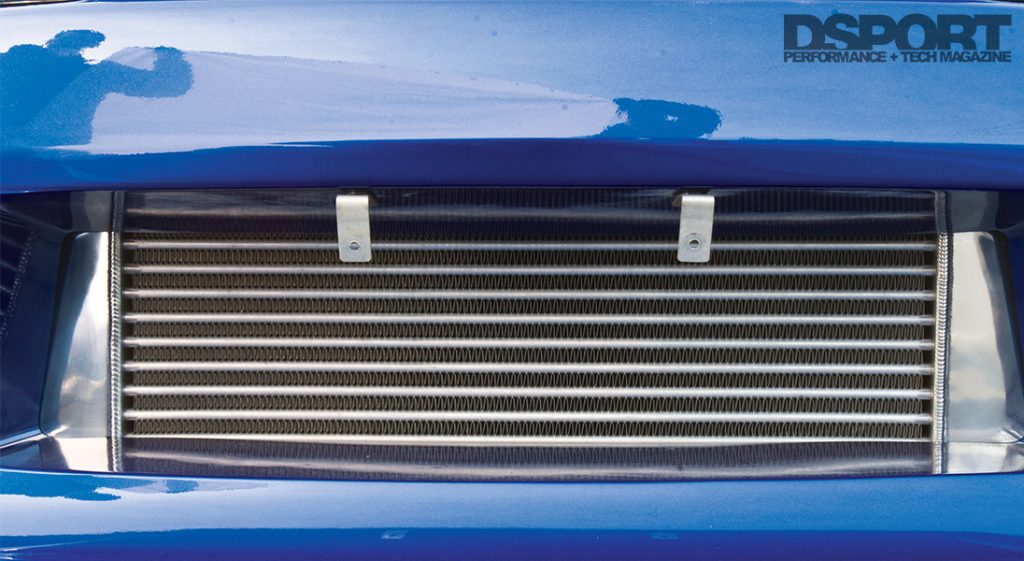 To provide the fuel for the fire, four HKS 740cc/min injectors deliver the 100- octane premium fuel to the cylinders. A Blitz Dual-SBC electronic boost control holds the boost pressure at 20 psi, while a re-flashed ECU manages the higher- flow injectors and triggering of the factory ignition coils. Tuned for reliable power delivery, this combination currently generates 365 horsepower and 305 lb-ft of torque at the flywheel.

Down to the Tarmac

Generating over-300 horsepower in the S15 pushes the capacity of the factory clutch, especially under hard driving conditions. To handle the added power at the flywheel, Ito chose an Exedy Hyper Single clutch to transfer power from the flywheel to the transmission. Once the power has been multiplied at the trans- mission, the propeller shaft drives a NISMO 2.0-Way limited-slip differential. This LSD divides the power between the Work XT7 wheels. The 18×9.5-inch rollers grab the tarmac with Bridgestone RE-01R 245/40R18 tires at all four corners. Beneath the front wheels, a set of Endless 6-piston calipers and 370mm rotors replaced the factory 4-piston calipers. A Global big-rotor kit takes its place in the rear to help shed speed. 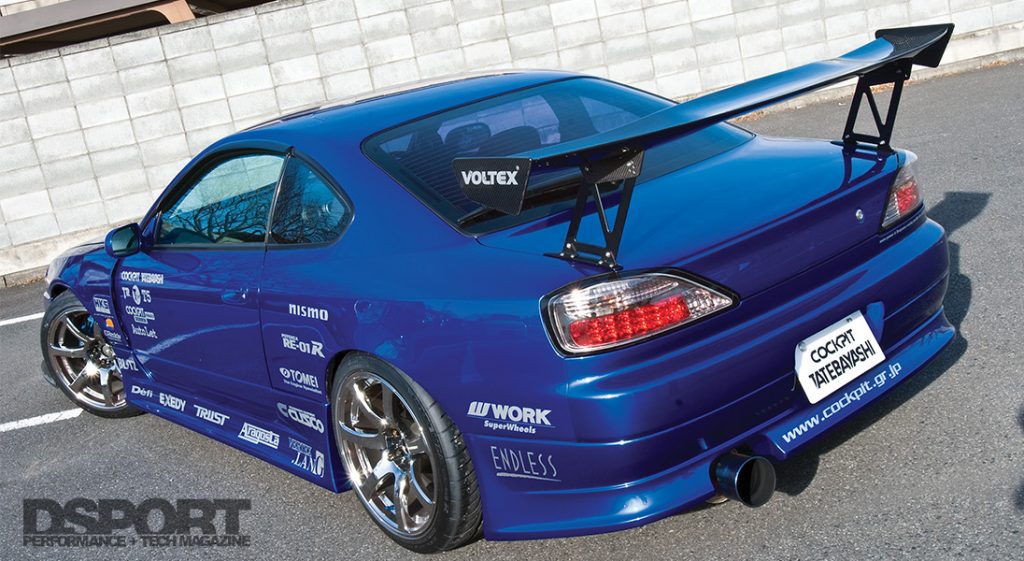 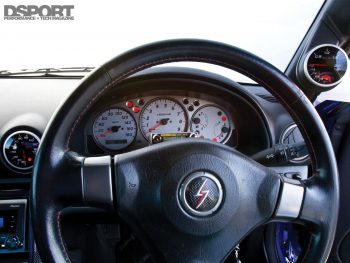 The practically laid out cockpit of the S15 features a red BRIDE Vios race bucket to secure the driver. A DEFI boost gauge replaces the factory dial in the A-pillar while a water temperature gauge resides in one of the air vents. An A’PEXi Rev- Speed Meter mounted to the dash collects and relays data at the racetrack.

Satisfied with the buildup, Ito took his Silvia back to the track after addressing the power deficiency of the stock powerplant. Packing more power, superior handling characteristics and improved aerodynamics, the S15’s performance continues to inspire Ito’s love of the racetrack. As Ito’s skills on the track improve, he plans to further explore the power he can make with a larger turbocharger and more boost pressure. While the daily commute offers an enjoyable excuse to drive, Ito enjoys the vehicle’s natural progression from show to go.