Insane Speed builds insane cars. It has produced numerous high-powered vehicles from 1,000+ horsepower EVOs and Supras to twin-turbocharged Lamborghinis. Building insane horsepower is the company mantra, and the challenge of doing so just to prove that it’s possible motivates shop owner Todd Allen. This “can-do” attitude prompted Allen to go to the trouble of building a high-horsepower single cam D16. It makes less than normal financial sense to the typical enthusiast but was just the sort of challenge that Allen thrives on. He acquired this Civic Coupe EX as partial payment from a customer who didn’t need it anymore. Allen decided to use it as a commuter car but immediately grew bored of the barely 106 wheel horsepower that it offered him for his 35 mile drive through the Lake Mead canyons each day. 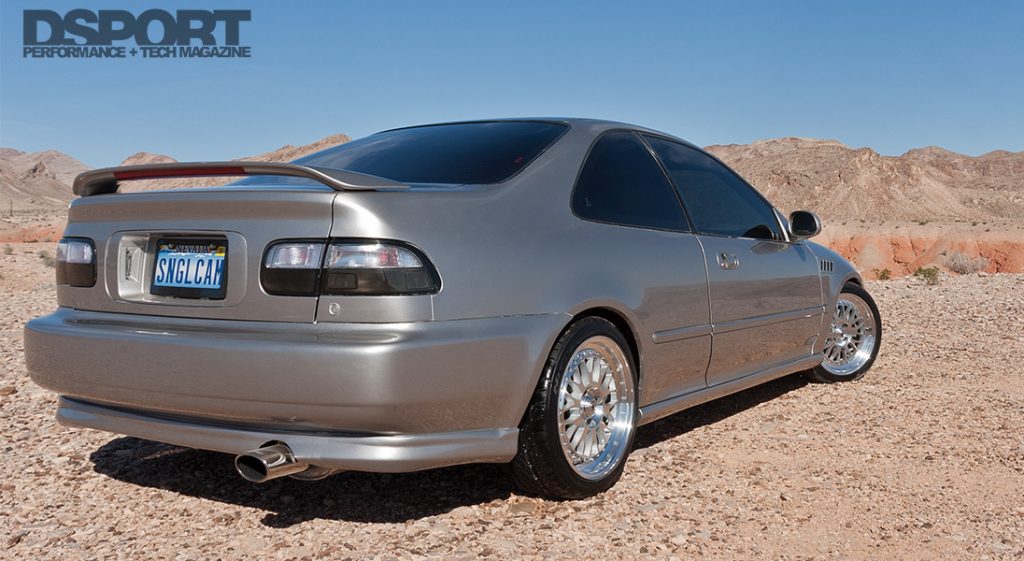 Built From The Bottom Up

To produce significant power figures from Honda’s 1.6-liter single cam VTEC engine required improvement and reinforcement of the longblock. The stock rods are simply no match for significant forced induction. With the head removed and the shortblock disassembled, Insane Power machined the stock cylinders and installed a set of Darton M.I.D. sleeves. Allen wanted to show what could be accomplished with the factory displacement, so the bores were filled with a set of 75mm CP Pistons with a boost friendly 9.5-to-1 compression ratio. SCAT connecting rods link the pistons to the factory crankshaft, completing the shortblock assembly. As the work on the block was completed, Insane Power improved the cylinder head’s efficiency with a street port service before installing a complete Supertech valvetrain. To actuate the valves and increase the lift for added flow, a Bisimoto Engineering 2.4 camshaft took its place atop the head. As Honda did not engineer the D16 to be built for extreme power output, the factory head bolts were deemed inadequate for containing the anticipated cylinder pressures. To accommodate stronger hardware, the block was machined and tapped for Time Sert inserts to accommodate ARP B-series head studs before the head and block were reunited. 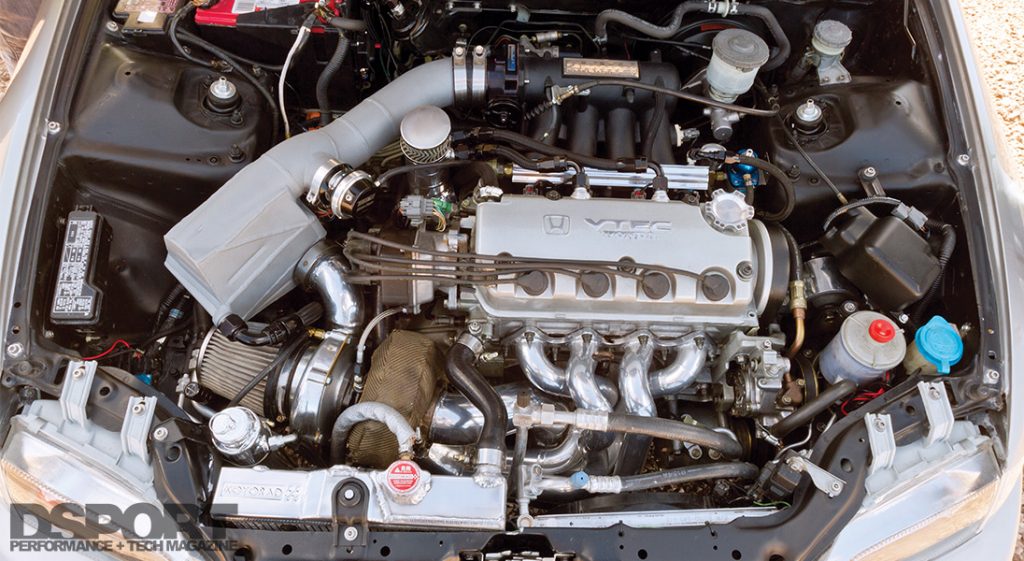 A liquid-to-air intercooler minimizes charge pipe length while not with airflow to the radiator and A/C condenser. 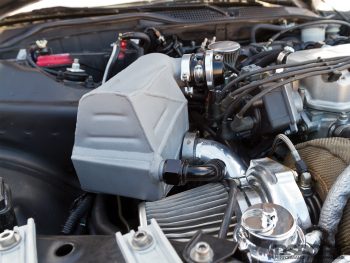 With a solid engine in place, designing a forced-induction solution capable of streetable response with good top-end power while retaining power steering and air conditioning was a must, especially in Las Vegas. Allen chose a Precision Turbo & Engine 6262 turbocharger for the duty. Positioned to the right of the engine and away from the power steering pump and A/C compressor, Insane Speed fabricated a custom sidewinder manifold and turbo-back exhaust for the PTE6262 turbo. The compressor feeds directly into an air-to-water intercooler system with a trunk-mounted reservoir positioned in place of the spare tire. Although this system adds ballast to the chassis, Allen reasoned that using this method of intercooling makes sense for him since the 100-plus degree summers in Las Vegas do not permit efficient cooling of the intake charge with a front-mount intercooler. In addition, the lack of an intercooler in front allows direct airflow to the half-width Koyo radiator and the A/C condenser core.

Even with a ground up engine build, properly selected power adder and ancillary components in place, the limiting factor for the D16’s output depends on Allen’s choice of fuel. With 91 octane readily available at the pump, it would be the logical choice. However, premium pump fuel will limit the amount of boost and ignition advance in the hunt for optimum horsepower. Racing fuels would certainly produce better results but the cost would be impractical. The balance of cost, convenience and output made E85 the best choice for Allen’s needs. A pair of Bosch fuel pumps sends the E85 fuel forward to a quartet of Fuel Injector Clinic 2,250 cc/min injectors at the intake ports. Once Insane Speed’s Mike Angel dialed in the fuel and ignition tables, the Civic managed to spin the rollers of a Mustang Dynamometer to the tune of 717 horsepower and 472.9 lb-ft torque at 28 psi boost pressure. Compared to 108 horsepower produced by a stock D16 on this dyno, this insane single cam now generates over six times the power. This ranks among the highest horsepower D series engines on record. 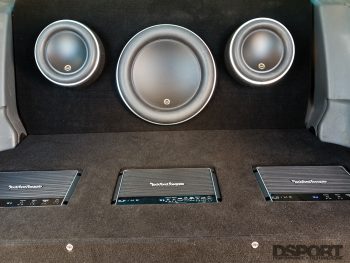 Achieving the horsepower objectives for this commuter was the primary focus of the build. However, since its still Allen’s commuter, the Insane Speed staff refined the interior as well. Leather seats and a steering wheel sourced from an Integra GS-R add style and comfort to the cabin. The rear seats were replaced with a custom subwoofer box and amp rack filled with hardware from JL Audio and Rockford Fosgate. The box houses a 13-inch JL Audio W7 subwoofer flanked by a pair of 8-inch W7 woofers. Rockford Fosgate R1200 amplifiers supply the wattage to drive the trio of speakers. A quartet of Focal coaxial speakers delivers the mids and highs with a Kenwood head unit serving as the source for the sounds. 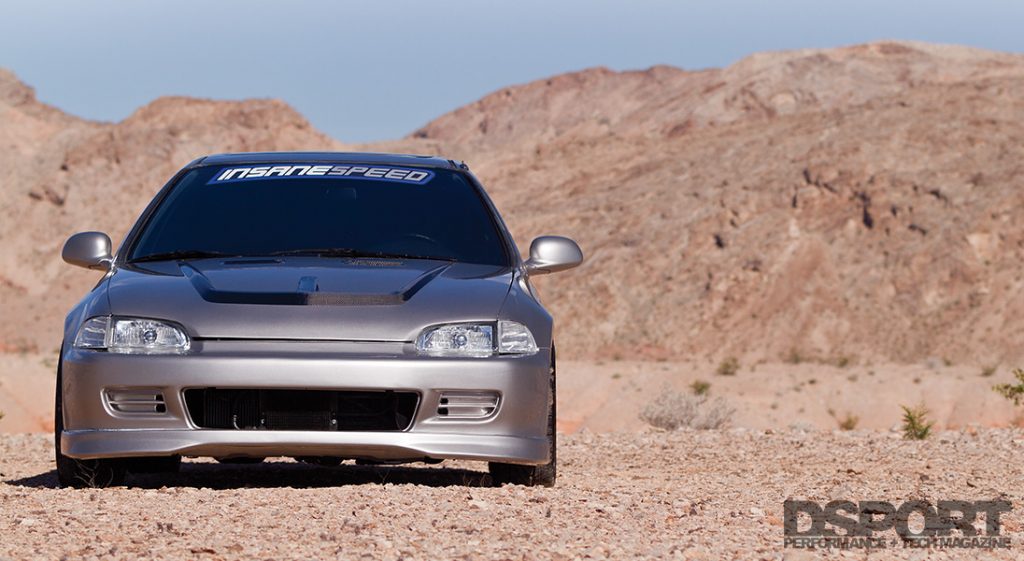 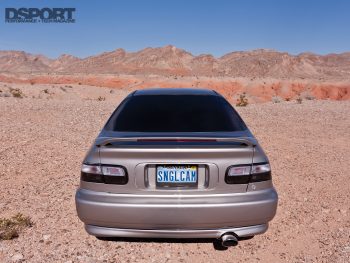 Once Allen heard and drove the Civic, he could comfortably consider the project completed. He concludes, “After investing $30,000, I am pretty much done modifying this car. When set up properly, the Civic handles well and exhibits a light and nimble feel while making enough power to be fun. I believe it’s among the highest horsepower single cams in the country. I’ve since downsized to a more responsive PTE 5558 turbo making 578 horsepower, which is still a pretty high output, especially with a 55mm turbo. I don’t see any reason to alter it further. Admittedly, despite the horsepower output, my favorite aspects of the car are the sound system and the suspension. The Progress coilovers and sway bar change the way the car handles and makes it far more fun in the canyons. Even after building numerous 1,000-plus horsepower Supras, GT-Rs, EVOs and Lamborghinis, I had a great time putting this little Honda together and an even greater time driving it to work.” Meeting the challenge of making power from the single cam proved more than rewarding for Allen, as his daily commutes make this insane build seem a bit reasonable.