“Ricer”. Is it a slur, a racial put down, a term meant to put down a vehicle for looking the part, but not having the goods to back it up? In Rochester, New York, “Ricer” takes on a new meaning. “Ricer” is the nickname given to STM’s 9- second street and strip EVO. While the ignorant often label all types of Japanese performance vehicles “Ricers,” STM figured there’s no better revenge than to build a “Ricer” capable of decimating just about anything found on the street. Considering that this EVO has already run a 9.27, we’re pretty confident that one would be hard pressed to find a nicer ricer. 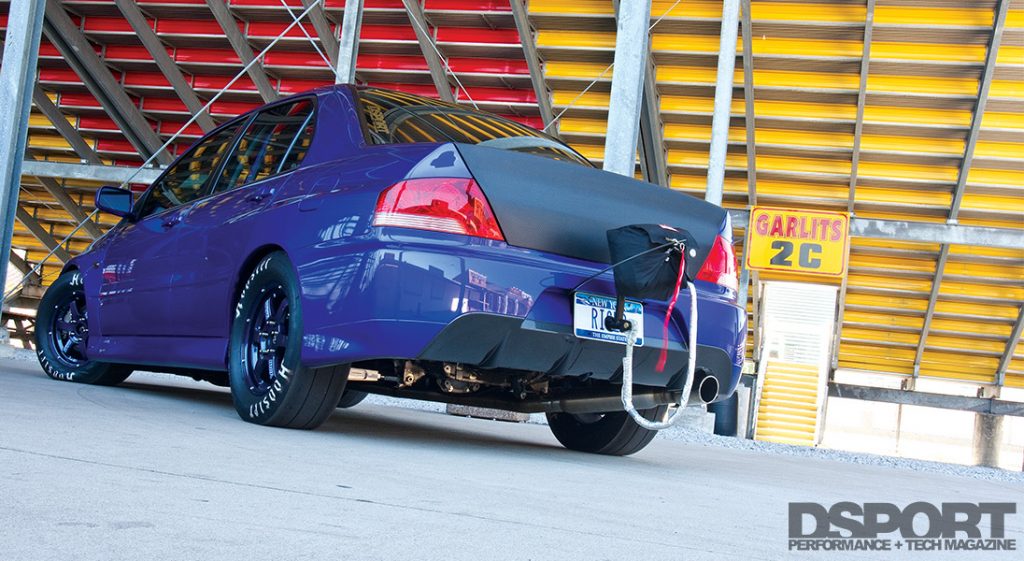 The Path To Performance

Ricer evolved over the course of time, engaging and achieving every goal that Kapral and his fiancé Shawna Susice could devise. With practically every essential bolt-on part for the 4G63 installed and tuned, Ricer held the title of quickest and fastest on a stock-block for a year and a half, its best effort being a 10.04 at 142 MPH. In addition, the simple cleanliness of the build and the meticulous work performed on the chassis earned Ricer a number of show accolades as well. Unfortunately, a devastating 1-2 mis’ shift at 10,000 RPM forced a full engine build, prompting STM to raise the bar for their project. Although they rode the cusp of 9-second E.T.s and just fell short of the threshold before the engine failure, Ricer’s new objective would make the old goals pale by comparison. 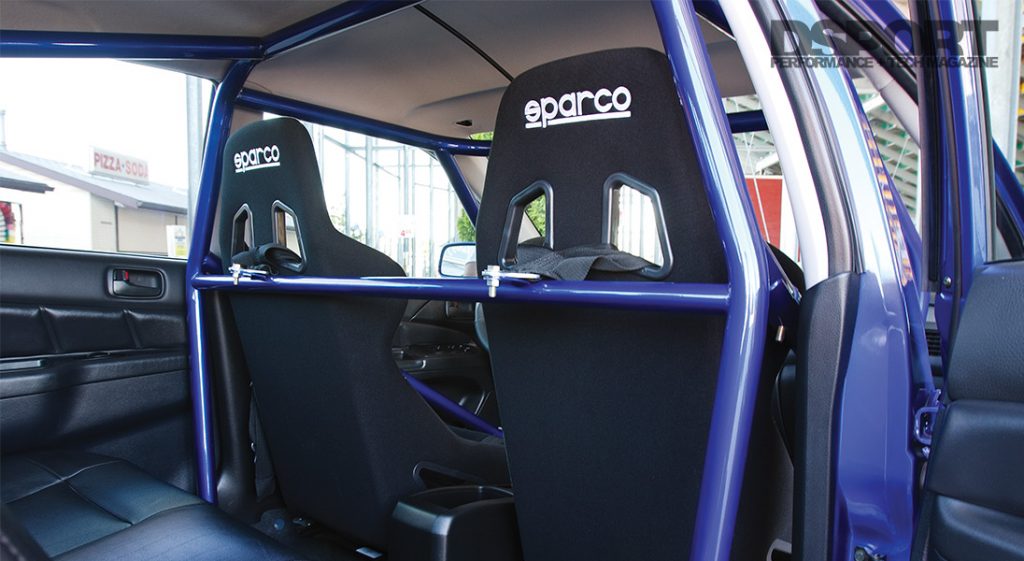 Despite the presence of the IHRA 8.50 certified cage, the EVO retains much of its function, especially when commuting to work or going out for a night on the town.

Power To Meet A Purpose

After pulling the blown 4G63 from the engine bay, a call was made to Buschur Racing for a new powerplant. The decision to keep the factory displacement was made as Kapral comments, “The purpose of the Ricer is to drag race. Therefore, I want the engine to see as many RPMs as possible at the top end. I don’t want a stoker engine that sacrifices this higher redline for a boost-response advantage or a few hundred RPM.” The Buschur 2.0-liter hard block features a factory bore and stroke, but the rotating assembly has been reinforced with GRP billet-aluminum connecting rods and custom forged slugs from JE Pistons. Since the coolant passages in the block were filled with concrete to reinforce the cylinders, an oil cooler was added to help cooling. Up top, a Buschur Racing Stage-3 cylinder head equipped with +0.5mm valves, dual valve springs and titanium retainers by Supertech took its place atop the block. Buschur Racing BF 272-degree bump sticks actuate the valvetrain. Although the shortblock no longer contains coolant passages, coolant still flows through the head and exchanges heat through a half-width Koyo radiator. 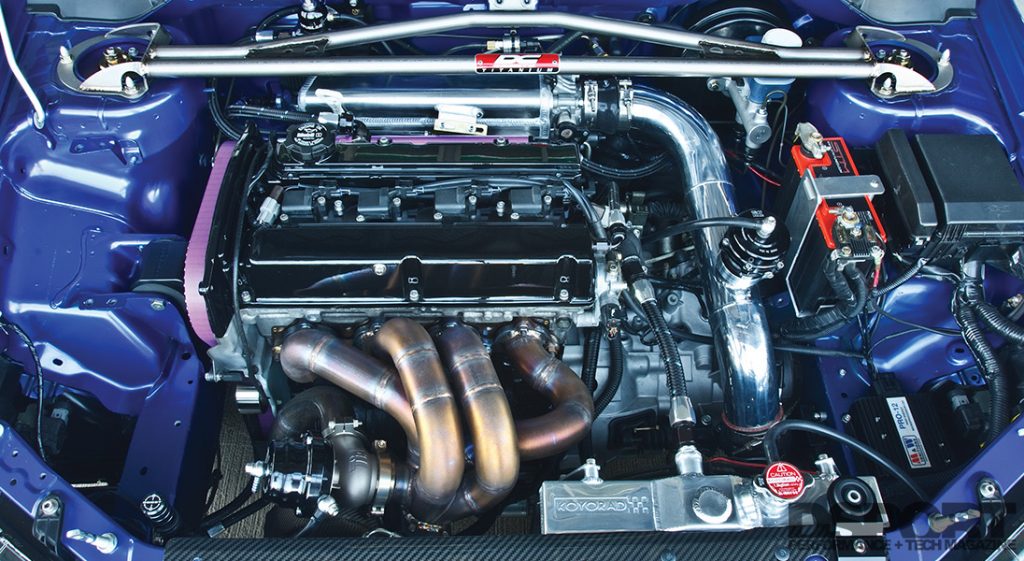 The formula for a purpose-built engine is like a gourmet recipe; if it’s done right, the outcome is magnificent. In the case of “Ricer”, having set objectives allowed Buschur Racing to season the recipe to Kapral’s taste. Some of the specifics of Kapral’s Buschur-built engine remain veiled in secrecy, but the power delivery is what captures attention. The displacement remained unchanged because Kapral did not wish to sacrifice RPM and top end power in exchange for low-to midrange power (usually gained from an increase in displacement.) The lighter rotating assembly (pistons and rods) allows for faster piston speeds. Combined with a reinforced valvetrain, higher-lift, longer-duration camshafts and a properly-sized turbo, the built two-liter engine generates 786 horsepower to the wheels. 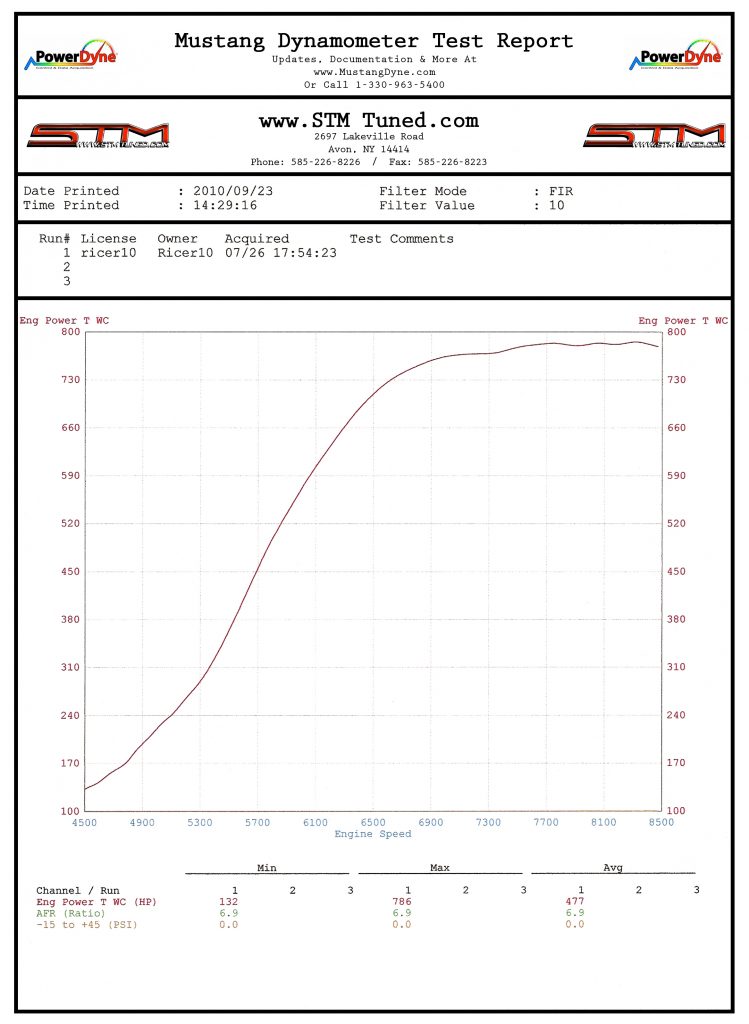 (L) STM fabricated an equal-length manifold that positions the turbocharger just behind one of the openings in the bumper. (R)  The torque at the wheels proved too much for the bead of the Hoosier Quick Time Pro tires. The wheels were spinning off the beads. Screws acting as a bead lock secure the tires to the wheels. Could you drill into your TE37s?

An STM stainless-steel manifold positions a forward-facing Precision Turbo & Engine (PTE) PT6262 turbocharger just behind the opening in the front bumper. Tuned on E98, the EVO put down 686 horsepower to the wheels. With this setup, Kapral competed at the IDRC Sport Compact Nationals at Norwalk Raceway on May 30, 2010. Slicked down and ready to run, the Ricer won the all-wheel drive slick class victory with consistent mid nine-second passes. He even set a new personal best E.T. of 9.38 seconds. But this was not enough. 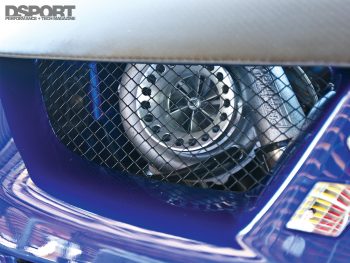 Already proven to run in the low-to-mid nine second range, why not shoot for the eights? Duplicable passes had shown Kapral two important facts. The first fact was that the car was running consistently, which was good news. Second, the capacity of the existing set up was maxed out, which was not good news. In order to reach for quicker E.T.s, a larger turbocharger and camshafts became essential. Back to the PTE catalog, selecting a turbocharger capable of flowing enough air to support horsepower demands in excess of 750 led to the PT6765 turbocharger. Matched with a set of custom-ground Buschur Racing camshafts, the new setup was expected to deliver the horsepower. With Kapral back at the laptop tuning an AEM EMS, the Ricer put down 786 horsepower and 588 lb-ft of torque to the rollers of STM’s Mustang Dynamometer. Compared to the baseline pull of 210 horsepower, the Ricer now generates 3.7 times the original power, without increasing the displacement. Technology is the ultimate replacement for displacement. Taking the additional power back to the drag strip, Ricer set another personal best with a 9.278 @ 156.14 MPH. 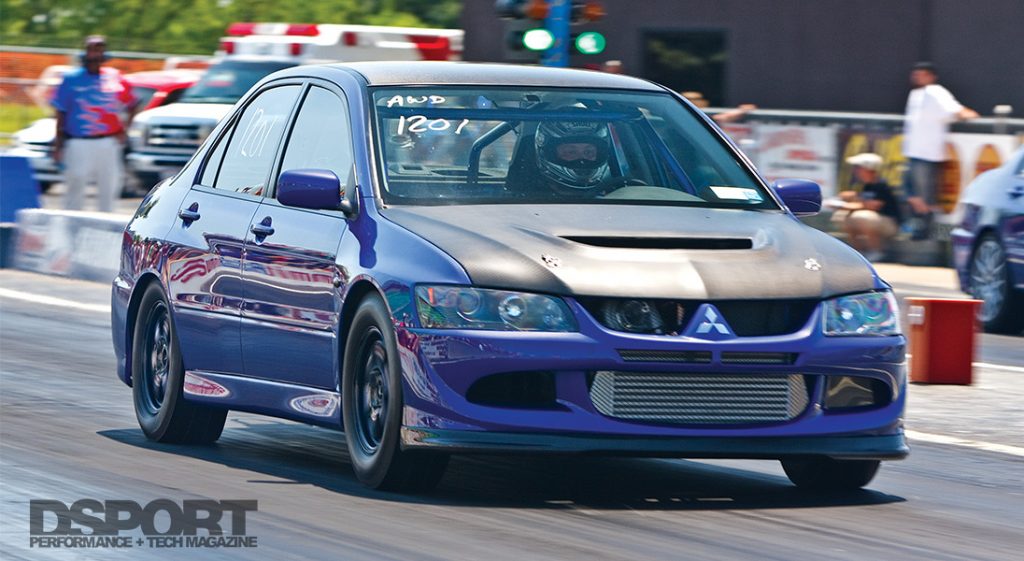 Having made its mark at shows and the strip, Kapral is focused on dipping into the eights. He comments, “Ricer was destined to show the world what it can do. One weekend it will take first place at a car show, the next weekend it will make a low 9-second pass down the 1320. And, it is still begging to go faster. We almost gutted and converted Ricer into a full racecar, but we still enjoy the looks we get driving down the street with a parachute mounted to the back of the car. We’ll get another chassis to build into a ground-up racecar. For now, our goal is to make an 8-second pass as a full-interior street car. How’s that for a car that might be called a ricer?”