Mash ups are inevitable. Fusion can be found in foods, fashion and lifestyle. So what happens when European automotive style gets blended with JDM? Well, you might end up with a build like Patrick Estudillo’s turbocharged, E46 M3 GTR. 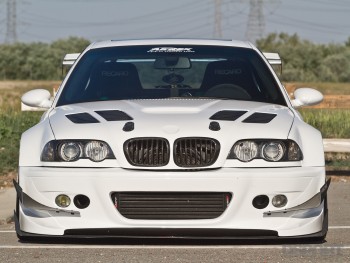 Estudillo first fell in love with the E46 while in high school and later purchased his E46 brand new in September, 2006. As the final model year of the E46 chassis, it was the last hour to get his dream machine off the showroom floor before the new E92 M3 went into production. Straight from the factory, the E46 M3 already had an aggressive style with pronounced wheel arches and an overall wide looking stance. Yet adding simple modifications such as wheels and suspension vastly improved the look of the car,” he said. On that note, Estudillo began modifying the car after owning it for only one month. He started with some TEIN adjustable coilovers and new wheels and tires, two basic upgrades with noticeable impact. But he soon hatched a more ambitious plan, one that would evolve in stages over the course of eight years and eventually his M3 would become the machine he’d envisioned. 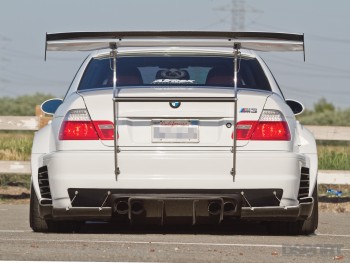 The foundation for the build started with three primary directives, a car that is a strong competitor at shows, street drivable and capable of attacking the track at any given time. To set this build apart, Estudillo chose to incorporate both European and Japanese-tuning influence into the build. This fusion of styling cues soon became an integral part of the build, affecting nearly every aspect of the project. Inside the cabin, the factory headliner and pillar covers were sheathed in black suede with red stitching. This upholstery matched the Japanese-spec ASM Ruby Edition Recaro RS-G seats with JDM Recaro seat mounts and sliders. A Key!s Racing suede-wrapped, deep corn steering wheel replaced the factory unit, complementing the new interior. A roll bar with harness bar was selected to reinforce the cabin structure and to provide a mounting point for the four-point Takata harnesses. Carbon fiber overlays on the dash and door panels accent and finish the appearance of the interior. Hidden in plain sight behind the factory grills and throughout the cabin is a complete Memphis Audio system composed of M-class speakers powered by M-class amplifiers and driven by the factory head unit. 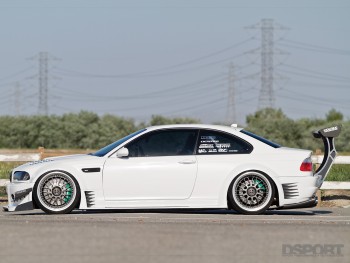 On the outside, Estudillo turned to German tuner Floβmann (pronounced “Flossman”) Auto Design GmbH for its M3 GTR wide body kit. The arch vents were shaved before receiving a fresh coat of Lexus LFA White Nova Pearl paint. The fender and bumper vents received custom grilles while a custom chassis mounted splitter complements the Voltex Racing carbon-fiber canards to help with frontal down force. Out back, a 3-piece Varis diffuser works in conjunction with a Voltex Racing Type-V carbon fiber GT wing to balance the down force over the rear of the chassis. Custom aluminum risers make the connection between the chassis and the wing, adding a race-inspired yet practical application of aerodynamic styling. To fill the arches of the widened wheel wells, Estudillo chose 20-inch Work VS-XX wheels mounted with low profile Toyo Proxes T1S tires.