It all started $100,000 ago when Jose Gonzalez was in search of a project car. The hunt for the project wasn’t an issue; however, the budget was. Gonzalez had crunched down his options to three vehicles: Datsun 510, Toyota Celica, and Nissan Hakosuka. Fortunately for Jose, a friend of his introduced him to Eric of JDM Legends; the man that made it all happen. 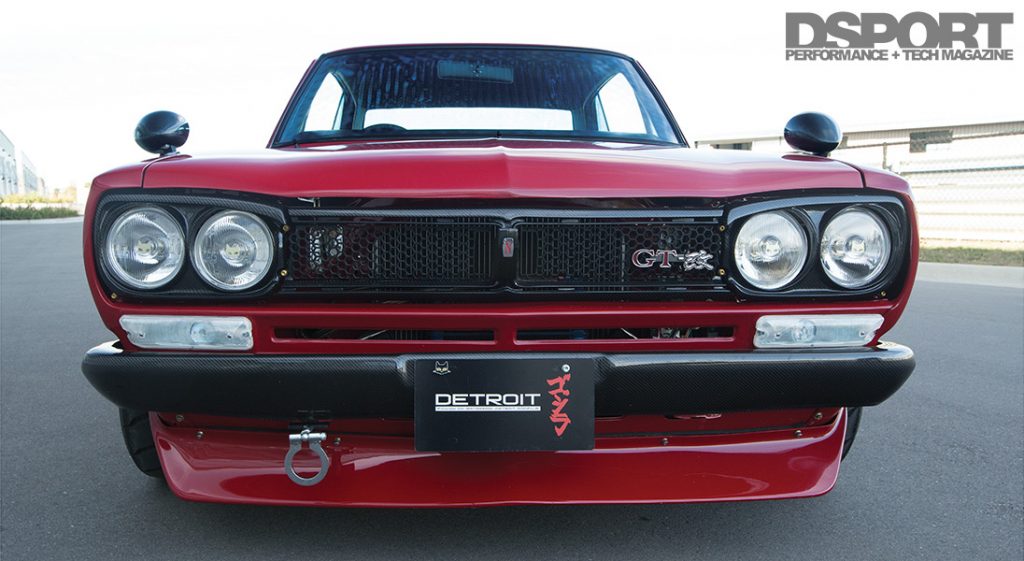 A Change of Luck

With a long line of people ahead of Jose looking for the same car, which he had narrowed down to the Japanese legend that is the Skyline; things took an unexpected turn. “I got lucky,” said Gonzalez, and lucky he got when Eric introduced him to his two choices: a silver Skyline and a red one; two cars that would allow him to jump ahead of the long line. Jose capitalized on his good luck and purchased the silver car even though it was the one in the worse condition;  his budget only allowed him to own the less expensive of the two.

Gonzalez purchased the Nissan Skyline from JDM Legends while it was still on the docks of Japan, and even though it was the less expensive choice, the project ended up costing him more than both cars combined – and then some more. Having a background in automotive designing, Jose had some thoughts about his new car. At first sight, he saw it as a rust bucket, but he knew that most classic Skylines coming from Japan would be in such condition. The designer in him, however, saw the heritage that made him choose this particular model. After days of checking on the waiting list to see when he will have his turn on a classic coming from Japan, rust was not going to discourage Gonzalez. 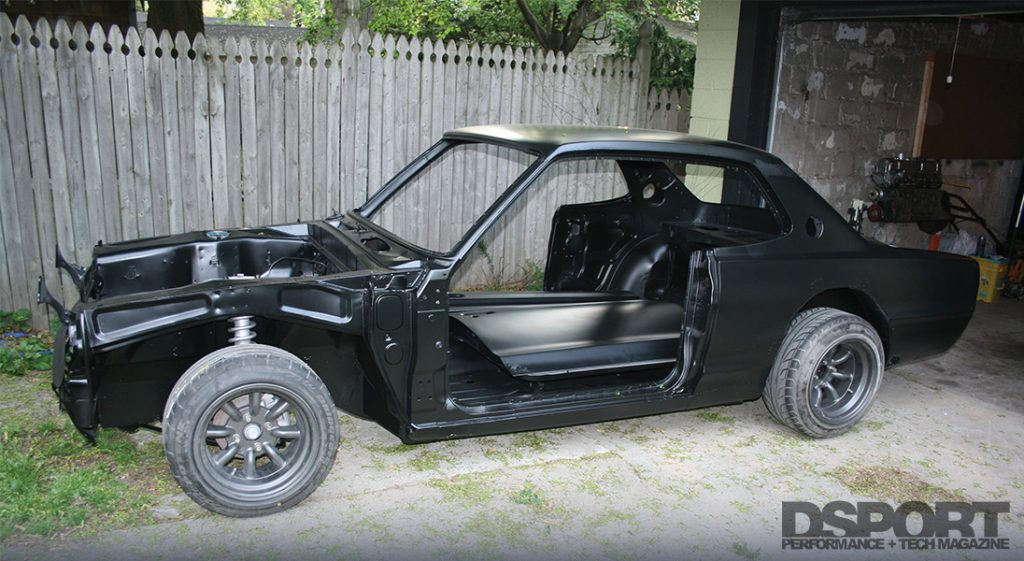 Gonzalez was extremely disappointed in the condition of the Skyline’s body, as the visible rust was not his only problem. If Jose had chosen to wait for the next shipment for a chance on a better car, he would’ve had to pay $10,000 more. After tearing the classic down and walnut-blasting the body, all areas of the body were exposed, revealing far more rust than Jose had imagined. When he took it to a body shop to get an estimate on the body work, the shop worker said, “if this wasn’t a Skyline, it would be in the yard.” The amount of rust was shocking to Jose, as this was his first build. However, he soon realized he had made the right decision sticking with this project.

For Gonzalez, attention to detail was the priority for this project. “I have a designer background, so it’s hard not to get into the details,” he said. The KGC10 originally came with an L20 inline-six. The plan was to quickly fix this iconic ’72 to make it a track car, and a ground-up restoration was not in the books in any way, shape, or form. “I just wanted to chip away at certain areas and just enjoy driving it,” Jose explained. Fortunately for Gonzalez, he had family that does body work; the factor that completely scratched the original plans. 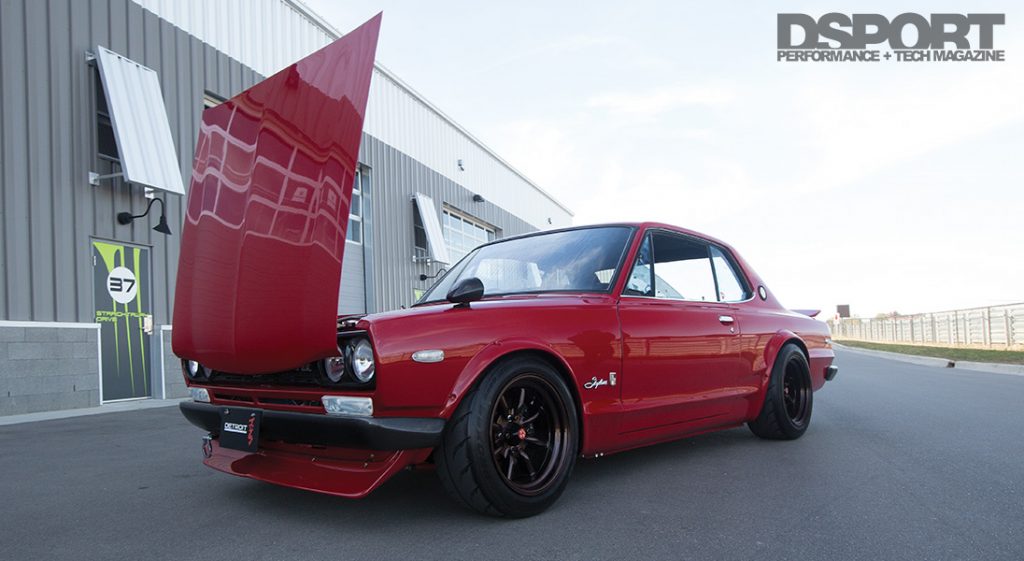 Jose’s family convinced him that the classic deserved a bare-metal stripping treatment. Without putting up a fight, Gonzalez agreed to the change of plans and decided to leave no rusty bolts on the Hakosuka. Up until this project, Jose didn’t own a tool box, and the learning curve quickly began in the form of trial-by-error. The first obstacle he was facing was the lack of English information regarding this Japanese car, which caused him to have to remove the engine and put it back in place three times. The second obstacle that made this GT-R project “fun” was the difficulty in acquiring parts for it in the USA; however, Jose was determined to complete the mission.

“Growing up I always heard friends say how they’re going to do this and that, but never get anything accomplished,” he said; “I didn’t want to be that person.” For a long while after, Jose had to do a lot of research and translation from Japanese to English, slowly learning that the USA only sold parts for the L28, and the 510 and 240z had no interchangeable parts with the Skyline. His determination forced him to purchase most of his parts from Japan using a broker; a middle-man that took additional 10% for each order, not to mention the double-shipping charges.

Time to Get Serious

Language barriers and lack of parts weren’t going to stop Jose at this point, and the Skyline went from being a project to being a mission. After initially purchasing an inexpensive stroker with a score in the cylinder bore, as well as facing issues that caused him to take the engine in and out of the car three times, Jose decided on an L28 motor. The change in engines made it nearly impossible to use the stock parts, and the original differential, half shafts, CV axles, and brake system were no longer options. 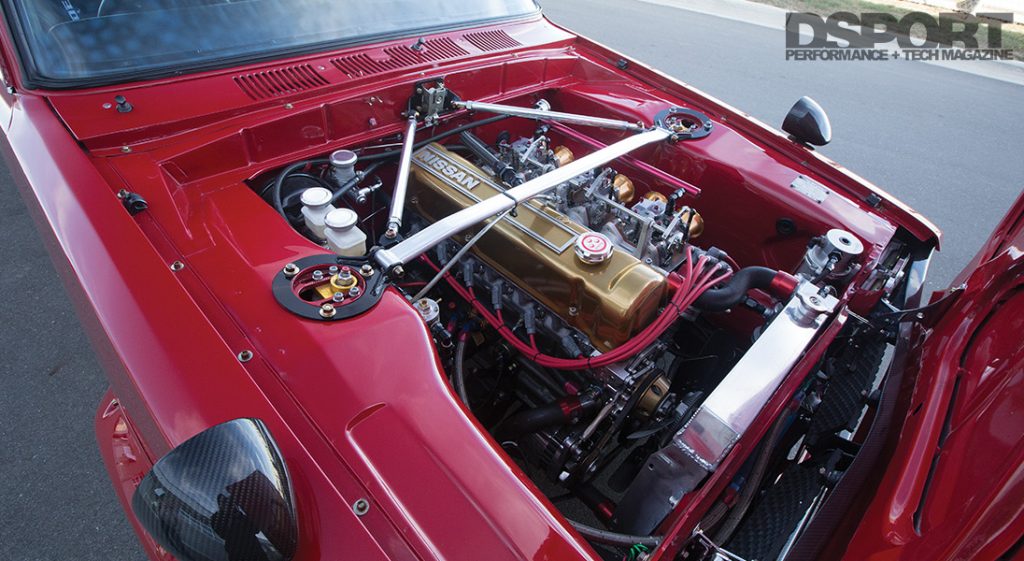 The stock components that came with the Skyline were unusable, so Jose had to replace every hose, clamp, and bolt under the hood. 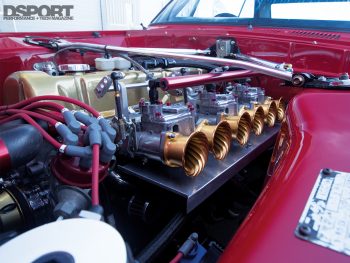 The L28 motor with the N42 head was bored out to 89mm for a total displacement of 2.9-liters . The new engine has stock L28 connecting rods, stock crank, Tomei pistons, and sealing the cylinder head is a 1mm MLS gasket that is clamped with ARP studs. Capitalizing on the oversize 89mm bore, fuel is sent to the motor by a Mallory fuel pump through stainless steel fuel lines. To perfect the air/fuel mixture, the GT-R is equipped with triple Mikuni 44 throttle bodies. The combustion is created by a set of NGK spark plugs, which send the gases flying through the MSPEED Japan exhaust system. The engine upgrades allowed the L28 to deliver 250 horsepower.

The ride height that Gonzalez describes as “low” is courtesy of Techno Toy Tuning springs and GAB adjustable shocks, which bring the Hakosuka to a visually-satisfying stance. The wheels receive power from a 280zx 5-speed manual transmission with an Exedy Stage 2 clutch and a Datsun Spirit 11-lb flywheel. Finally, Jose replaced the stock differential with a Subaru STI 3.9 LSD. 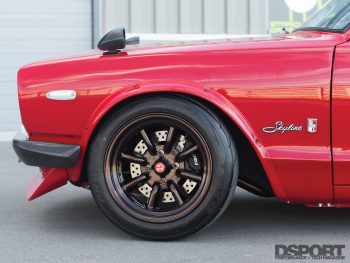 To complement the Nissan’s stance, Jose equipped it with Watanabe wheels for both the front and the rear, which measure 16” x 8” in the front and 16” x 9.5” in the rear. Wrapped around the dark Watanabe wheels is a set of Toyo R888R tires. To effectively stop the 250 horsepower classic Skyline, Gonzalez installed 11-inch brake rotors that work together with Wilwood calipers and Inline Tube stainless steel brake lines as the route for the fluid. 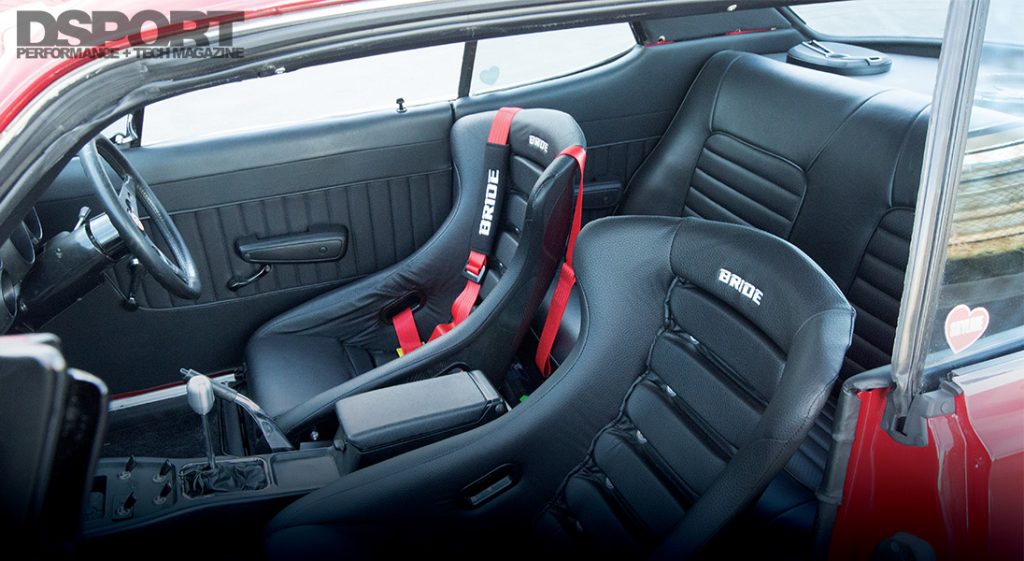 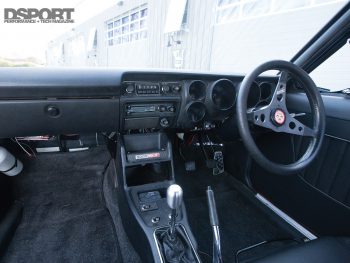 After numerous hours spent behind the computer surfing the Japanese market for these cars, Jose was able to get his hands on some unique finds; like the rare Watanabe Falcon steering wheel that only a few hundred of it were ever made, and the Bride Histrix seats that were discontinued and only recently had a second batch for sale.

As for the exterior, what initially was a disappointment to Jose quickly became a piece-of-art. He couldn’t afford shipping new panels from Japan to replace the rusty, old ones, so he had quite the task getting the body to the condition it is in today. The Nissan Red paint is the handy work of Ohio Paint Modification, the same place that did the extreme body work. The front bumper, the front lip, the spoiler, and the grille are all from Carbon Signal. To finish the exterior, Jose elegantly chose Napoleon Baccu mirrors that sit on the fenders, and Marchal headlights just south of them. 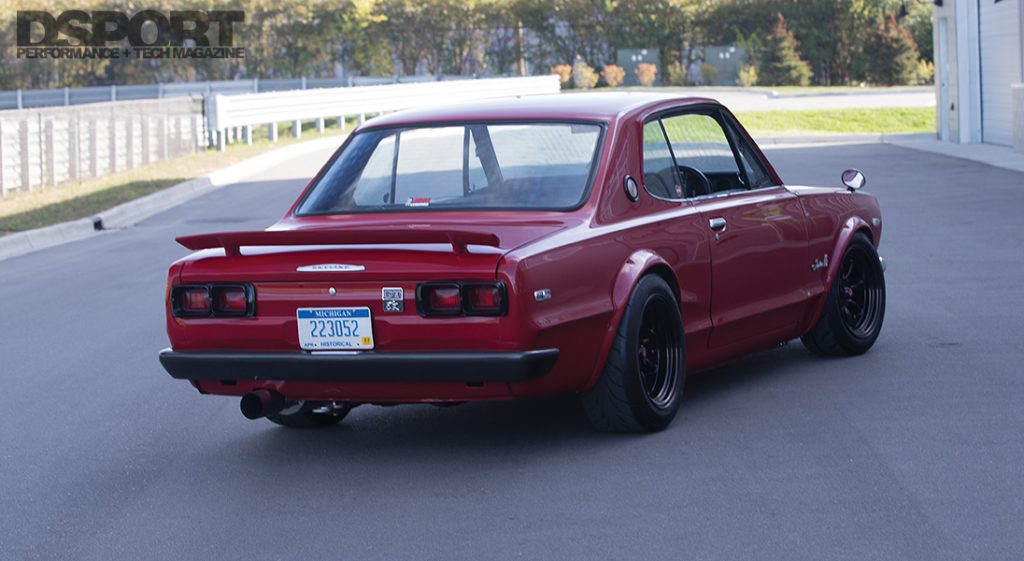 Jose Gonzalez’ dream car didn’t come easy, simply because no one in Detroit wanted to touch this car. The initial condition the Nissan came in discouraged everyone to help Jose, which left him on his own with a rust bucket that has no information or help on the internet. After many hours and many more mistakes, as well as priceless family moments with his father and uncle; Jose built a Nissan that rightfully received a Lion award at Concours D’elegance; one of possibly many more awards to come.