Name five bands or music artists that reached and held super stardom for more than a decade. There are a few out there, but it’s a short list. Many artists that enter the entertainment world with a bang are pressured to repeat their success on the next album. If they release an album too similar to their first, they’re ridiculed for lacking creativity and just doing more of the same. If they stray too far from what made them big, they’re kicked to the curb with all the other “washed up” names in the industry. The auto industry has also fallen victim to the insatiable online collective that either condemns or worships every OEM’s move in the market. In the age of the Internet, there is little room for error.

One of the more recently hyped releases is Subaru’s upcoming 2022 WRX. The WRX and its more muscular sibling, the STi, played a massive role in establishing the Subaru brand among enthusiasts in the United States. The rally-inspired design and performance, the standard AWD system on every vehicle, and the boxer four cylinder that Subaru just won’t let go, all add up to the WRX and STi being more than performance vehicles but also a lifestyle. They’ve seen success after success since their introduction to the United States in the mid-90s. However, the VA generation starting in 2015 was the first to build a significant divide among auto enthusiasts. Starting with the WRX now and tabling the STi for later, Subaru introduces an entirely new track list for 2022. 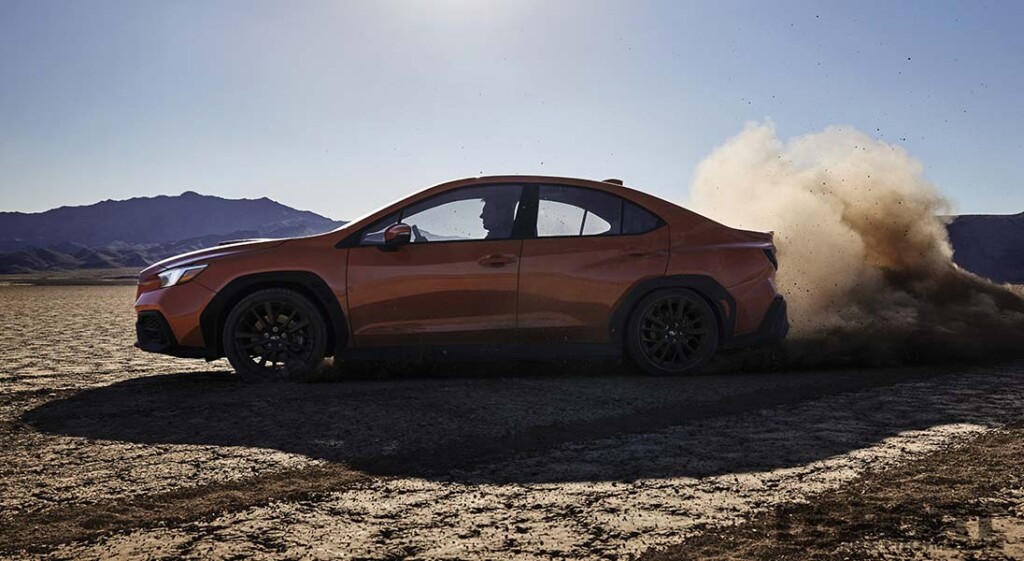 One of the most notable changes to the new generation WRX is the switch to a new powerplant. The FA20T powered the WRX from 2015 to 2021, which feels like a blink of an eye compared to the lengthy run that the EJ20 had for multiple generations prior. Despite the significant improvements in power, torque, and even fuel economy found in the FA20T, Subaru decided to change it up again for 2022. While the new WRX holsters an FA engine once again, the displacement rises to 2.4 liters for this new generation. An approximate 17-percent gain in displacement would lead most to believe that a significant bump in power and torque also come with the package. Don’t hold your breath, as the new model delivers a 3 horsepower increase and no gain in torque. 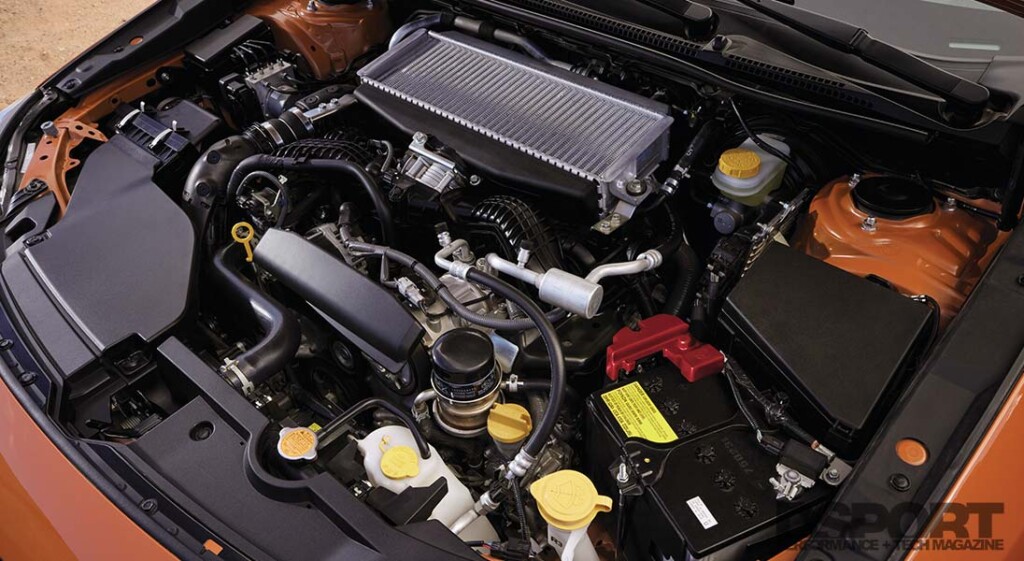 The 2022 Subaru WRX is outfitted with the newest version of the FA24 direct-injection turbocharged Subaru boxer engine. The 2.4-liter flat-four delivers 271 horsepower at 5,600 rpm.

You wouldn’t be alone in questioning what they were thinking to increase displacement almost half a liter to find nearly no gain in power. Subaru assured us that although the peak power and torque appear underwhelming, the real improvements lie in the delivery. The torque curve is broader with 258 lb-ft from 2,000 to 5,200 RPM. Plus, the turbocharger is equipped with electronically controlled wastegate and air bypass valves that help a steadier horsepower curve. According to Subaru, these improvements will result in better response and acceleration than previous models.

As usual, the 2022 WRX comes with Subaru’s Symmetrical All-Wheel Drive and Active Torque Vectoring to effectively send power to all four wheels. The six-speed manual transmission is largely the same as before, equipped with minor updates to improve shifting. The more notable change comes on the new eight-speed automatic transmission option, which Subaru has named the “Subaru Performance Transmission” or “SPT” for short. This allows for paddle shifting with up to 30-percent quicker upshifts and 50-percent quicker downshifts than what previous model automatic WRXs could offer before. If you choose to leave the shifting up to the car, you’ll find rev-matching downshifts under braking, and smarter gear changes that keep the car in ideal RPMs for more responsive corner exits. If you dig into the details, you’ll find that this SPT is actually a continuously variable transmission (CVT) in disguise. It’s an odd decision for Subaru to throw one of the most enthusiast-criticized car components into its most popular model aimed at the very same crowd. But even though the purists will likely pass on this option, those who favor the ease of an automatic and the fun of paddle shifting will enjoy the significantly improved feeling of shifting “gears” from the driver’s seat, compared to previous models. 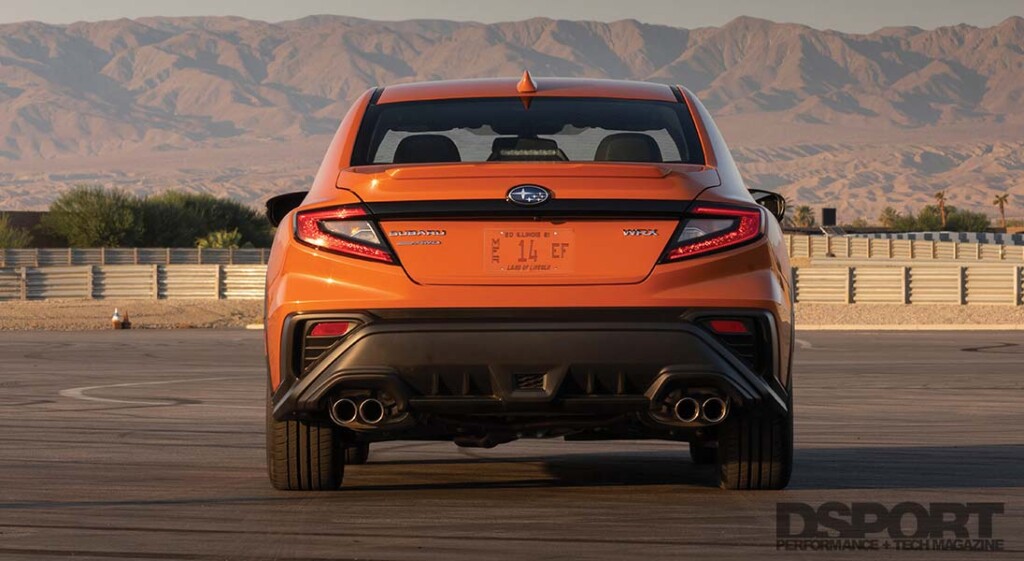 Under the skin, the 2022 WRX continues on with Subaru’s Global Platform for its skeleton. The new model takes to a few chassis improvements, including a full inner frame construction and greater use of structure adhesives. This adds up to a 28-percent increase in overall torsional rigidity and a 75-percent increase at the suspension mounting points, making for improved ride comfort and better handling than before. Subaru also relocated the rear anti-sway bar mounting points from the subframe to the body, enabling it to more effectively reduce body roll around corners. An even lower center of gravity tops it off for a better driving and handling experience than before. 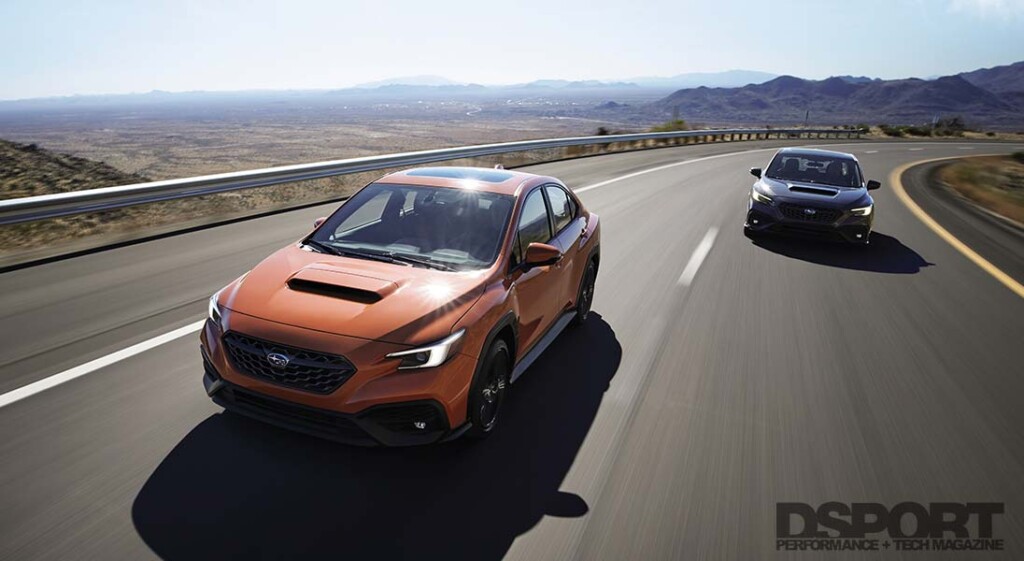 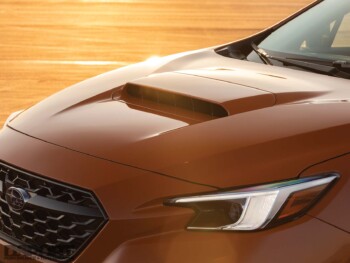 There’s an ongoing theme of design decisions that are sure to divide audiences, and it definitely does not stop at the revised appearance. For 2022, Subaru tightened up the front fascia with smaller LED headlights and more of a pointed appearance than the flat wall front end that the previous WRX carried. The signature hood scoop has also been widened to emphasize a flatter and wider look at the front. Further emphasizing this wide look, the fenders now pop out with greater significance, giving the car much more noticeable hips over the wheels. Subaru ridded the WRX of its gigantic looking rear bumper with inset trunk for a tidier back end. Borrowed from the recent Crosstrek, Subaru also implemented the black plastic wheel arches to outline the wheels. These act as a continuation of what Subaru calls “character lines” that are the black plastic lower trim molds that run around the entirety of the car’s lower body exterior.

Regardless of how these changes may hit you aesthetically, they do deliver some aerodynamic performance benefits. Air outlets at the trailing edge of the front wheel opening and at each side of the rear bumper provide smoother paths for airflow, equating to reduced lift and greater stability. The wheel arches, lower trim, and engine undercover feature a fine honeycomb texture that Subaru claims will reduce air resistance. 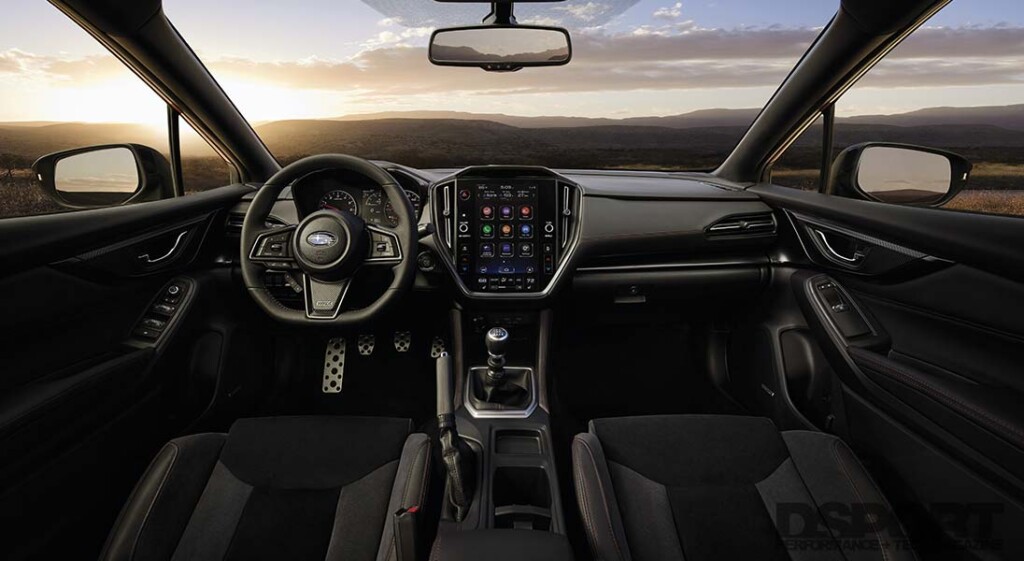 EyeSight Driver Assist Technology is equipped on all trims with SPT, and has been enhanced with a wider view and better response. 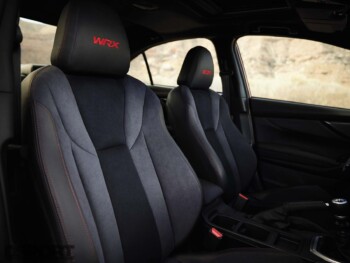 The 2022 WRX will be available in the usual Base, Premium, and Limited trims, with one new addition – the GT. The GT model features electronically controlled dampers, giving drivers the option to drive in one of three modes: Comfort, Normal, and Sport. Further, users can select driving modes to also customize steering feel and SI-Drive, among other settings to enhance their driving experience. The GT model will also be the only model to receive special Ultrasude, red-stitched Recaro seats to support driver and passenger around hard corners. The GT trim is spoiled with exclusive 18-inch aluminum alloy wheels in matte gray, sporting aggressive 245/40R18 summer performance tires to top it off.

But there is a major catch here. Although the 2022 WRX in the GT trim receives all the exclusive bonus features of more advanced suspension, custom driver modes, upgraded seats, and bigger wheels and tires, it is also only available with the aforementioned Subaru Performance Transmission. You won’t find a clutch pedal or H-pattern shifter on any of the labeled “top-of-the-line” GT trim models.

We had the opportunity to ride around in the different trims of the WRX at The Thermal Club, with pro driver Scott Speed behind the wheel. Having experienced the car in person, the new WRX offers much more than what you’d expect based on the numbers. The car is compliant and responsive going into corners, and although the gas pedal won’t throw you back in your seat, the power delivery is both smoother and stronger than the previous generation. The suspension settings on the GT trim were impressive, offering a much broader spectrum of comfort and performance than expected. The comfort setting took to bumps, track curbs, and rumble strips with very little transferred to the butt of the seats. And the Sport setting changed the character of the car to feel like it was built for the track, enabling cornering and responsiveness never felt in a stock WRX.

An even greater surprise was the Subaru Performance Transmission. Don’t expect it to feel like any sort of dual-clutch transmission, however, tapping into the next gear up delivered a satisfying pop in the exhaust as the RPMs reflected an effectively quick shift. The downshifts left little to no noticeable delay between the gears as we hit the braking zones and went into the corners. As much as we’d love a clutch and an H-pattern shifter on this trim, there’s no shortage of the feeling of complete control and responsiveness with the SPT. 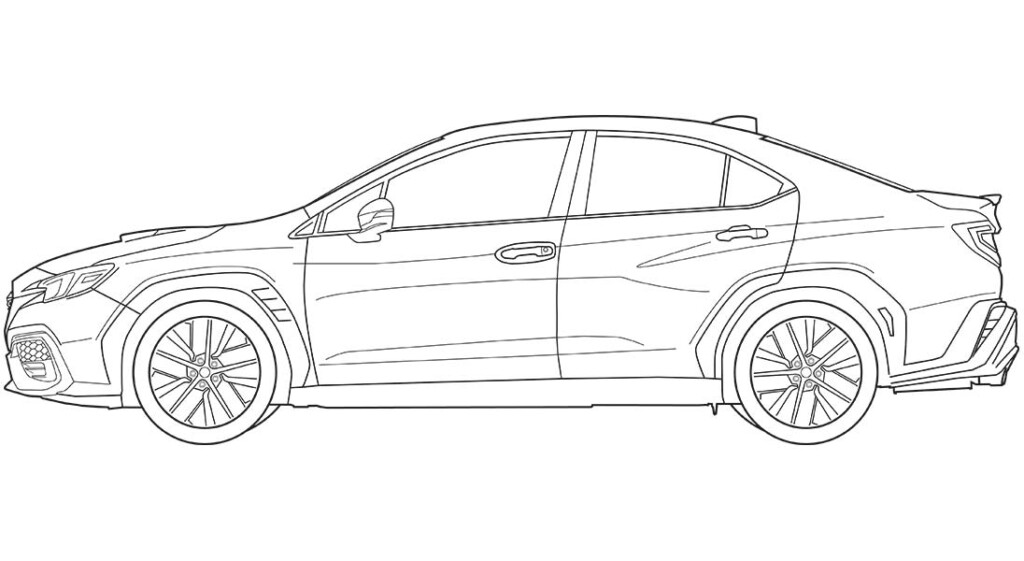 Many of the armchair professionals, armed with their keyboards and witty headlines, have already declared the 2022 WRX as Subaru’s swan song in the hot four-door segment. There’s no denying that although Subaru is labeling this model as a fifth generation WRX, it feels a lot more like generation 4.5. Despite the mild updates, the performance in this new model is still improved over previous variants in almost every way. And although the aesthetic changes are stirring up plenty of over-the-top negative reactions online, Subaru cleaned up some of the bloated details found in the 2015-2021 WRX. While depriving the top trim of a standard gearbox is an outright sin, we hope that we can be pleasantly surprised by the SPT’s ability to handle power mods and track abuse. Subaru played it safe here, and although the 2022 WRX may not be the next big hit in the auto industry that people seemed to expect, it’s still a continued step in the right direction.