Today’s import-performance engines are generating more power per cylinder than ever before. On the street or at the track, it is not uncommon for these engines to be modified to generate four to six times the original horsepower output. There are now four-cylinder engines generating over 1,500 horsepower while six-cylinder engines have produced over 2,500 horsepower. When power levels are multiplied, the weak points of an engine’s design become apparent. Typically, the factory connecting rods and pistons represent the obvious weakest links. As a result, most tuners correctly upgrade these components during the engine build. However, the engine’s head fasteners are sometimes overlooked and the result is often a compromised head gasket seal. Considering that an engine that multiplies its power output also multiplies the stress on the head studs at nearly the same level, you have to question the sanity of any engine builder that relies on factory head bolts on a high-performance engine. Quality aftermarket head fasteners in a variety of alloys can provide a sealing solution for any application. To allow you to choose the proper head fastener for your application we are going to examine cylinder-head sealing factors, along with the science behind head fasteners. 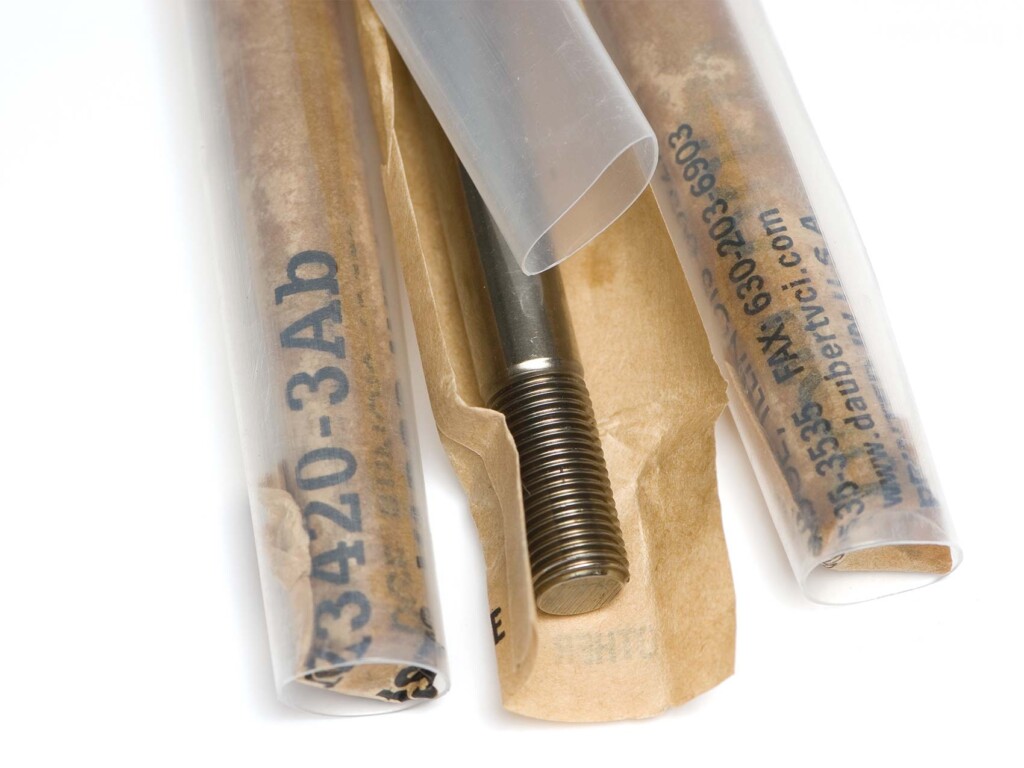 At one time, L19 was the “go-to” material for serious performance applications with extreme cylinder pressures. L19 alloy is still used for custom head stud and main stud applications. L19 has special handling requirements limiting exposure of the fasteners to moisture. ARP’s CA625+ alloy offers the same or better performance without the requirement of special handling. As a result, this is the new go-to alloy with ARP offering shelf-stock CA625+ upgrades for popular applications.

The head gasket and head fasteners are responsible for keeping the top half of your engine attached to the bottom half. The design of some engines inherently makes them better at maintaining a proper head gasket seal than other engine designs. The number of head fasteners used per cylinder, the diameter of the head fasteners and the quality of the material used in the head fastener will all play a role in determining how much power can be produced before the head lifts from the engine and the gasket seal is compromised. All other factors being equal, engines that are designed with five fasteners around each cylinder will be less susceptible to head gasket failure compared to an engine designed with four fasteners around each cylinder. Engines that use 12mm fasteners will have a sealing advantage over engines using 11mm or 10mm fasteners. Finally, the quality of the fastener material will also play a critical role. In comparing two identically sized fasteners of different materials, an ultra-high-strength 260,000psi (tensile-strength) alloy (like L19 or CA625+) fastener would deliver 37 percent more clamping force than a high-strength 190,000psi (tensile-strength) fastener (8740). If you are planning on increasing the torque output of your engine more than 40 percent above the factory levels, you need to consider improving the head gasket seal of your engine. A quality multi-layer-steel (MLS) head gasket is a must and quality high-performance head bolts or head studs should also be on your parts list.

Bigger, Better or Both?

For most high-performance builds where the engine torque output is doubled over the factory output, the off-the-shelf ARP 8740- or ARP2000-alloy head bolts or head studs will do the trick. If you are planning to go beyond this torque output increase, there is a chance that you will need to look into either increasing the size of the fasteners or upgrading the material of the fasteners (or possibly employing a combination of both strategies). On high-horsepower Toyota Supra engines (2JZ-GTE), a number of engine builders re-tap the cylinder block to accommodate ½-inch studs. In comparison to a 12mm stud, a ½-inch stud delivers 10-percent more clamping force. Additional clamping force can also be obtained with a higher-strength alloy torqued to a higher setting. An ARP 2000-alloy fastener would also deliver a 10-percent increase in clamping force compared to the standard high-performance ARP 8740 alloy. If even more clamping force is needed, ARP can produce custom head fasteners out of an L19-alloy or they may have a CA625+ option on the shelf. The L19- or CA625+ alloy fastener delivers a 35-40-percent increase in clamping force compared to the 8740 alloy or a 20-percent increase over the ARP 2000 alloy. When an engine is modified to produce more than twice its orginal torque output, it’s possible that a combination strategy of both bigger and better head fasteners may be needed. Hence the 10-percent advantage of going to a larger ½-inch stud from a 12mm stud could be combined with the 35-to-40-percent advantage delivered by using the CA625+/L19 alloy in place of the 8740 alloy.

The cost of off-the-shelf CA625+ or custom L19 head fasteners may be three to six times the price of standard ARP 8740 or ARP2000 head fasteners. In addition, the practicality of stepping up to larger head fasteners may not be an option if your engine block isn’t making a trip to the machine shop. Since nearly every enthusiast is on a budget of some sort, you need to be realistic in your selection of high-performance head fasteners. If you are building a 500-horsepower B-series Honda, off-the-shelf ARP 8740 head studs should do the trick. If you are building a 1000+ horsepower RB26, you’ll need CA625+ alloy head studs. Always supply the same head studs, head gasket and torque specs that will be used on assembly of the engine to the machine shop honing the cylinders to ensure round cylinders when a torque plate is being used. 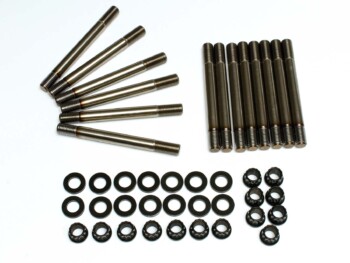 What should I buy: head studs or head bolts? In the past, the answer to this question was usually something like, “Use studs wherever you can and use bolts when you wouldn’t be able to remove the cylinder head(s) if studs were used.” When a stud can’t be removed from the cylinder block, the cylinder head needs to be lifted straight up for the entire length of the stud before it can be removed from the vehicle. On a number of applications, this can be an issue. However this isn’t much of an issue nowadays as ARP manufactures head studs that are broached (an allen key can fit inside the broach) so that they can easily be removed with the head still sitting on the block. In effect, these studs can be removed as if they were bolts. Studs deliver a performance advantage over bolts as they provide more consistent and accurate torque loading. Unlike a bolt that is actually being “twisted” while its being torque, a stud is only being stretched in its vertical axis. When properly installed, studs should only be finger-tight into the block. This “relaxed” mode ensures that the stud is only stretched and not twisted for accurate torque settings.

More to the Science

In addition to the size and alloy of the fastener, the manufacturing process also plays a role in determining the performance of the stud or bolt. At ARP, a great deal of time is spent at each stage of the manufacturing process to ensure that a quality product is produced. During the heat treating process, each stud is placed vertically in individual racks to ensure complete heat penetration into the alloy. After heat treatment, each stud is centerless ground to guarantee straightness to the stud. Once grinding is completed, the threads are then rolled on to the stud. According to ARP, “Rolling the threads after the heat-treating phase gives the studs 10 times the fatigue resistance compared to studs manufactured with the threads rolled before the heat treatment process.”

Always use the recommended torque value from the installation instructions with ARP fasteners. This may be lower than the maximum value shown in this chart. The instruction values consider the block and head materials to establish a proper value.

Going bigger is sometimes and option with head studs. For example, RB25 and RB30 blocks can be retapped from 11mm to use a larger RB26 M12 head stud. That upgrade adds nearly 20-percent more clamping force. Upgrading from an ARP2000 12mm head stud to a CA625+ alloy can add another 20-percent more clamping force or over 45-percent more than standard 8740 alloy. Notice that a standard 8740 1/2-inch head stud has less clamping force (16,391 lbf) than an M11 head stud made from CA625+ alloy (18,600 lbf). While standard 8740 1/2-inch head studs can be significantly cheaper than a superior alloy M11 or M12 head stud, you should factor in the cost to retap for the 1/2-inch studs and the cost to modify the cylinder head to fit the larger studs. In most cases, you will come to the conclusion to use the CA625+ head studs whenever they are available.

Club DSPORT uses ARP head and main studs in just about every engine it turns out. The higher the cylinder pressures, the more clamping force required by the head studs. Larger diameter or better alloy fasteners can deliver more clamp load to maintain enough force on the head gasket and block to retain the combustion seal. Since engine torque output is directly related to cylinder pressure, increases in the engine’s peak torque output will determine the need for improved head fasteners. Not all engine’s are the same, as thicker decks in the block and head result in a reduction in the required clamp load. An 800whp 2JZ-GTE may be OK with standard ARP head studs in M11 while an RB26 may require M12 CA625+ head studs above 800whp. Every application is a bit different. Thanks to high-quality manufacturing processes and constant advances in material sciences, ARP is working hard to ensure that fastener technology never becomes the weakest link in the performance chain.