At over two miles above sea level, Pikes Peak International Hill Climb draws competitors from across the nation and the world. For a young Michigan couple, Cody Loveland and Tabitha Lohr, taking on the mountain would be a team effort. Cody, the owner and proprietor of NSX tuning shop LoveFab since 2005, has been an instructor at Ginger Man Raceway for nearly 10 years. Building turbocharged NA1 and NA2 vehicles provided valuable knowledge and experience. When competing against world-class competitors and hill climb veterans in the Unlimited class, talent and chassis building encompass only a part of the big picture. Sponsor support was essential. As Marketing Director for LoveFab, Inc., Tabitha put her skill set to work. As first time racers, attaining sponsorship proved a challenge, but with just enough support to justify going forward with the project, Cody and Tabitha worked together to make their dream a reality. Text and Photos by Richard Fong 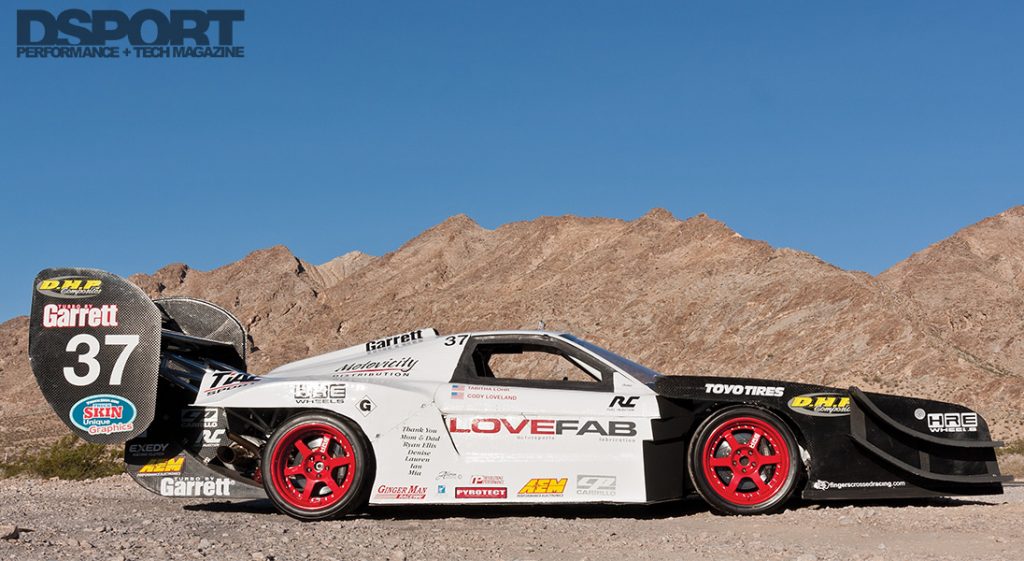 Starting with LoveFab’s 1991 NA1 NSX shop car, the team removed the body panels and utilized them as models for shaping wood molds. The completed molds then took a trip to DHP Composites, one of the first to sponsor the LoveFab racing effort. DHP Composites laid carbon fiber widebody panels, along with a carbon-fiber splitter, diffuser, front wing and rear wing. Once the panels had been fitted, the car barely resembled an NSX anymore. It’s carbon fiber side plates and wing planes changed the appearance dramatically but serve important functions, not only to reduce the weight of the chassis, but also to generate (in Cody’s estimation) 7,000 pounds of downforce onto the tires at 150 mph. 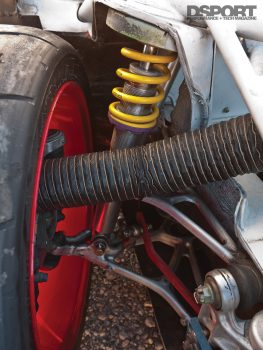 Producing nearly triple the car’s weight in downforce at speed while navigating turns as slow as 20 mph, warranted improvements to the rolling stock and suspension for optimum handling under varying speeds and turn radiuses. A custom set of HRE C96S LoveFab Special edition wheels mounted with Toyo RS1 tires supply the grip while KW Suspension Variant 3 dampers combined with KW Suspension 345 lbf/in springs up front and Eibach 550 lbf/in springs at the back form the foundation for the NA1’s suspension system. For increased suspension adjustment and flexibility, Cody fabricated a third element suspension system incorporating AFCO double-adjustable racing shocks that only provide additional dampening and spring preload under extreme suspension compression. The multiple position bell cranks offer quick adjustment of shock travel and leverage ratio. This setup provided the best balance of suspension compliance at low speed while keeping the chassis from bottoming out at high speeds. 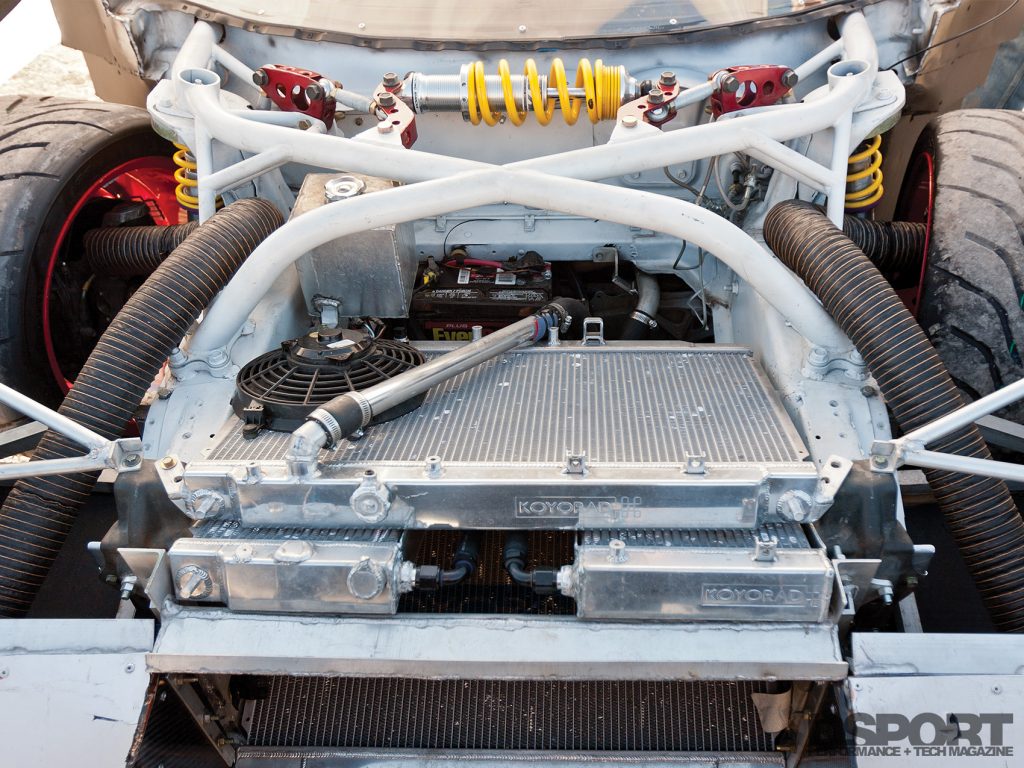 While dramatic increases in down force ensure improved traction and handling, it also produces aerodynamic drag. To balance the NSX equation, more power would be required of the C30A V6 engine. To add to the challenge, the thinner air density at altitude requires even more boost than would be necessary at a lower elevation. In preparation for increased boost pressures, the shortblock went to Dan Benson to be fortified with a set of Dan Benson Signature Sleeves. Upon its return, the block received a set of CP Pistons linked to the stock crankshaft by way of Carrillo rods. The unmodified factory cylinder heads and camshafts were then reunited with the block. 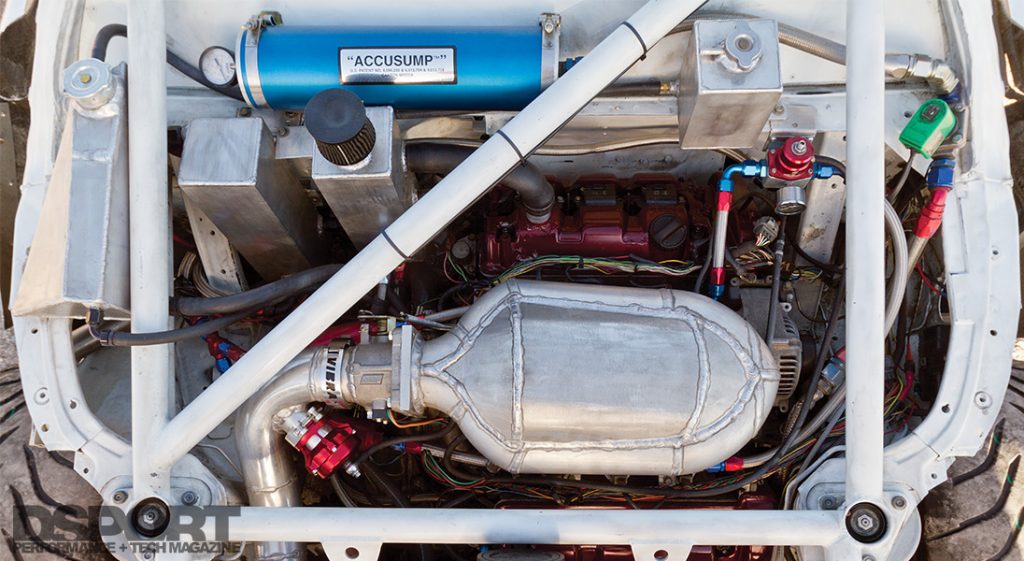 Third Element suspension designs first appeared on Formula 1 racecars in the early 1990’s. Loveland designed this suspension solution to complement the down force of the NSX’s custom aerodynamics. He explained, “The whole purpose of the third element design was to generate the best possible traction at low speeds while keeping the chassis off of the bump stops at high speeds. With stiff springs at each corner, low speed traction would suffer. On the other hand, soft springs would compress quickly and bottom out at higher speeds. The third element shock permits the use of softer springs at each corner to keep the wheels planted in the turns. When both shocks on the same axle are compressed (as they would when high speed downforce is applied to the chassis) the third element damper and spring provide additional travel and dampening for more progressive shock absorption.” 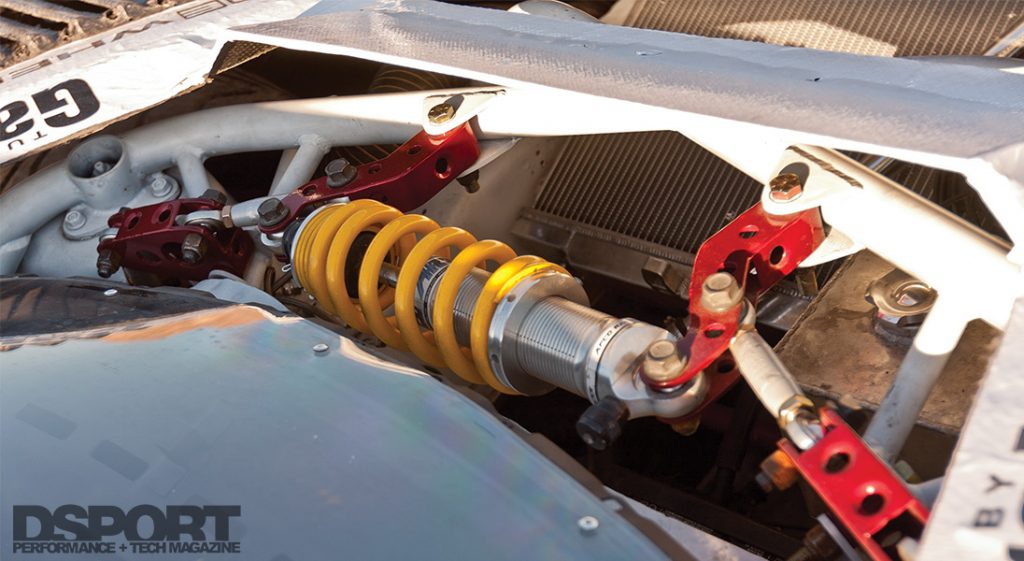 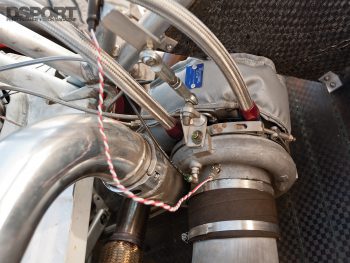 With the built engine in place, generating enough boost pressure to offset the altitude became the next priority. A custom exhaust manifold directs high enthalpy gasses from the six exhaust ports to the inlet of a massive Garrett GTX4294R turbocharger. Set at 28 psi, the turbocharger feeds positive boost pressure into a custom water-to-air intercooler before being routed to the custom enlarged intake plenum for improved air distribution and to increase the volume of air behind the ports. At the intake ports, RC Engineering 1,200 cc/min injectors spray VP Racing’s oxygenated Q16 race fuel into the cylinders. With an AEM Series 1 EMS monitoring and regulating engine function, Cody street tuned the NSX just two days before starting the 2,000-mile trek to Colorado. 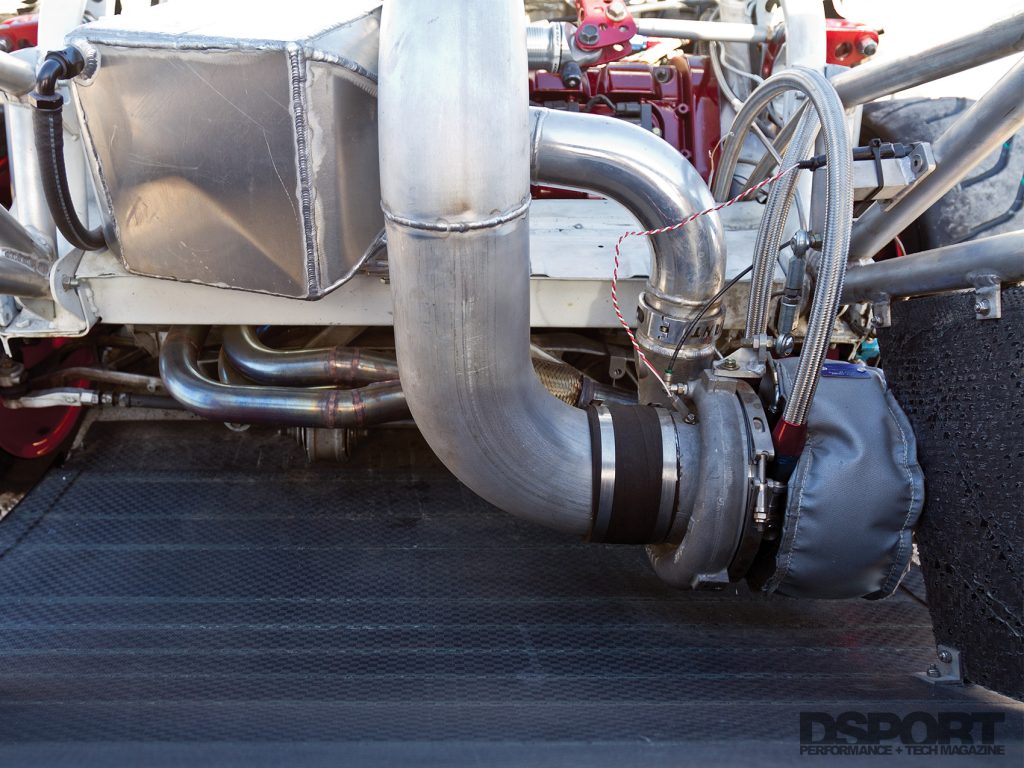 Barely finishing the build, the team made time for a shakedown session at Ginger Man Raceway. But misfortune found the LoveFab NSX in its second lap, as the engine developed rod knock. Cody determined that the dry sump system failed to return the oil to the storage tank quickly enough, resulting in oil starvation. Calmly, Cody made plans to drop in a spare stock engine in a day and depart in time to make it to Colorado for the tech inspection. Incredibly, just as quickly as misfortune attempted to thwart the team, good fortune picked them up. They received an email postponing the race due to the devastating Waldo Canyon wildfires, which gave the LoveFab effort valuable time to regroup and rebuild. Within a month, the NSX rocked a rebuilt engine and ran on the track. The shakedowns went well, aside from understeer above 80 mph. Thus Cody and his brother Chris fashioned massive sheet-metal canards to better balance the aerodynamics of the chassis before the NSX was rolled into the trailer for the ride to Colorado. 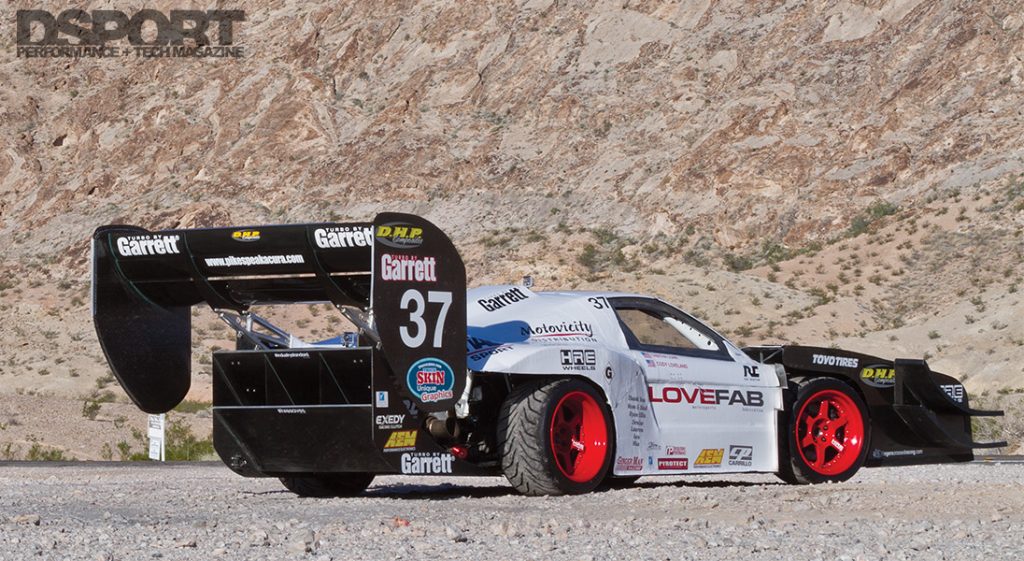 Even with the extra time, Cody and Tabitha barely made it to Colorado for the alternate race date. With E85 in the fuel cell, Cody retuned the AEM EMS on Revolutions Performance’s Dyno Dynamics Dynamometer. With advice from Revolutions’ Adam Kennedy, Cody addressed a fuel delivery issue before refining the tables for the thinner air and higher boost. The NSX generated 754 horsepower and 517 lb-ft torque to the wheels, an improvement of 249- percent compared to a stock NSX on that same dynamometer. 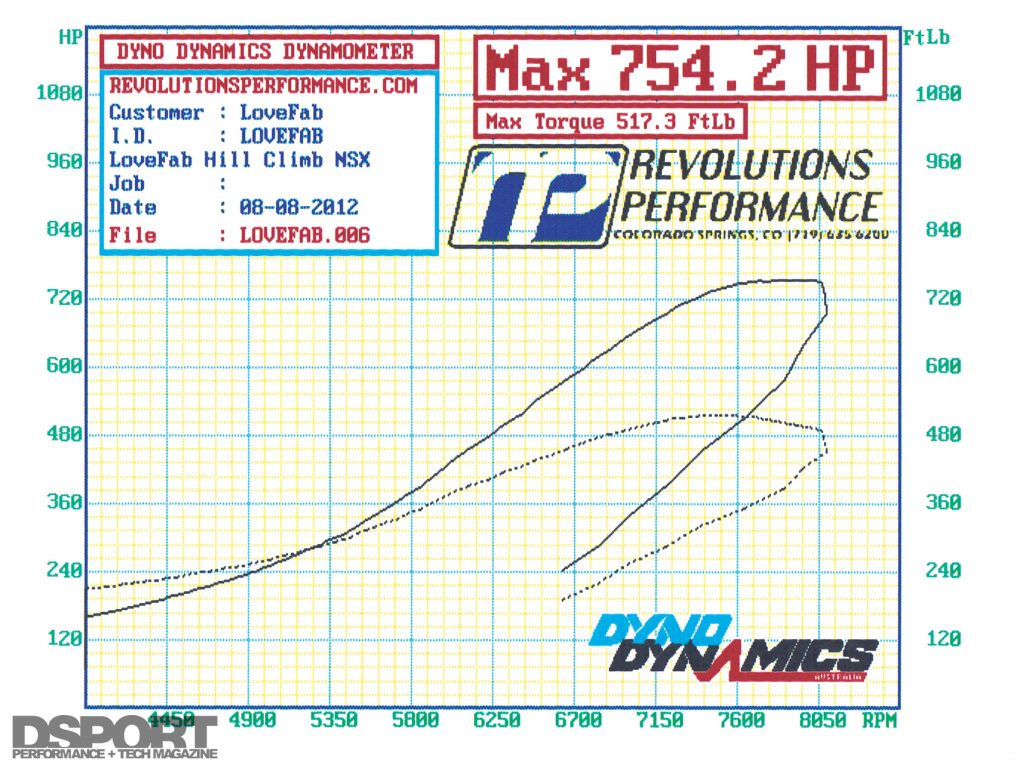 With the NSX readied to take on Pikes Peak, practice sessions were far from perfect for the daring duo. The front wing suffered damage from a collision with a boulder when Cody lost sight of the road (he was blinded by the morning sun rounding a turn) on the first practice day. On the second day of practice, their confidence improved and the pace quickened. But a miscommunication and mistaken turn sent them off course, causing Tabitha a compressed spine and four dislocated ribs. Her resilience and competitive spirit couldn’t keep her in the hospital for long, as she left as soon as the doctor would discharge her. This mistake caused serious injury and nearly cost them the weekend. Thanks to the incredible support of sponsors and fellow racers, the NSX was repaired and readied for race day. 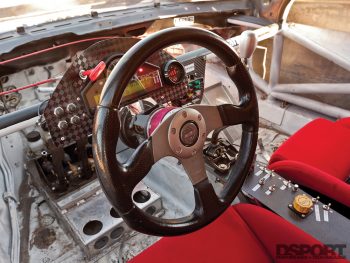 Despite seemingly insurmountable setbacks and mistakes leading up to the actual race, the LoveFab NSX not only finished the Race to the Clouds, it took home second place in the Unlimited class. Cody and Tabitha were elated as friends and family cheered them on as they crossed the finish line. Cody recalled, “Our goal was to simply finish the race, and we did. Every modification and change implemented served a purpose, and every improvement contributed to the success of the hill climb.” Tabitha added, “Pulling into Pit Row and seeing our families waiting for us in the rain is a sight I’ll never forget. To add to this, Cody proposed to me on the podium, making the sacrifice and hard work more than worthwhile.” Participating in this race proved to be a harrowing experience, trial by fire and dream fulfilled that Cody and Tabitha experienced together as they prepare to race down the road of life together. Cody and Tabitha would like to thank their sponsors and the following individuals for their help to make their effort possible: Ryan Ellis, Andy Hannah, Dave Carapetyan, Doug Siddens, Kash Singh, Adam Kennedy, Paul Dallenbach, Savannah and Valentin Ivanitski, Keith Taylor, Yukio Taira, Adam and Jeremy Jabaay, Joe Lapekas, Jordan White, My Life @ Speed, Pikes Peak Acura, TruckSkin, Motovicity Distribution and Dubric Industries. They also want to thank the Lohr and Loveland families for their love and support throughout their racing efforts.