Ford’s impressive ECOBOOST engine collection features several technologies that increase both efficiency and performance. These technologies include computer-controlled variable valve timing, a direct injection fuel system and even the latest turbocharger design from BorgWarner. Variants of these engines power the entire Ford lineup, from the economic Focus to the hefty F150 pickup. When packaged into the potent ST model however, the Fiesta has surprised the staff of DSPORT as one of our favorite cars in the D’GARAGE stable. Text by Sami Sharaf // Photos by Sami Sharaf 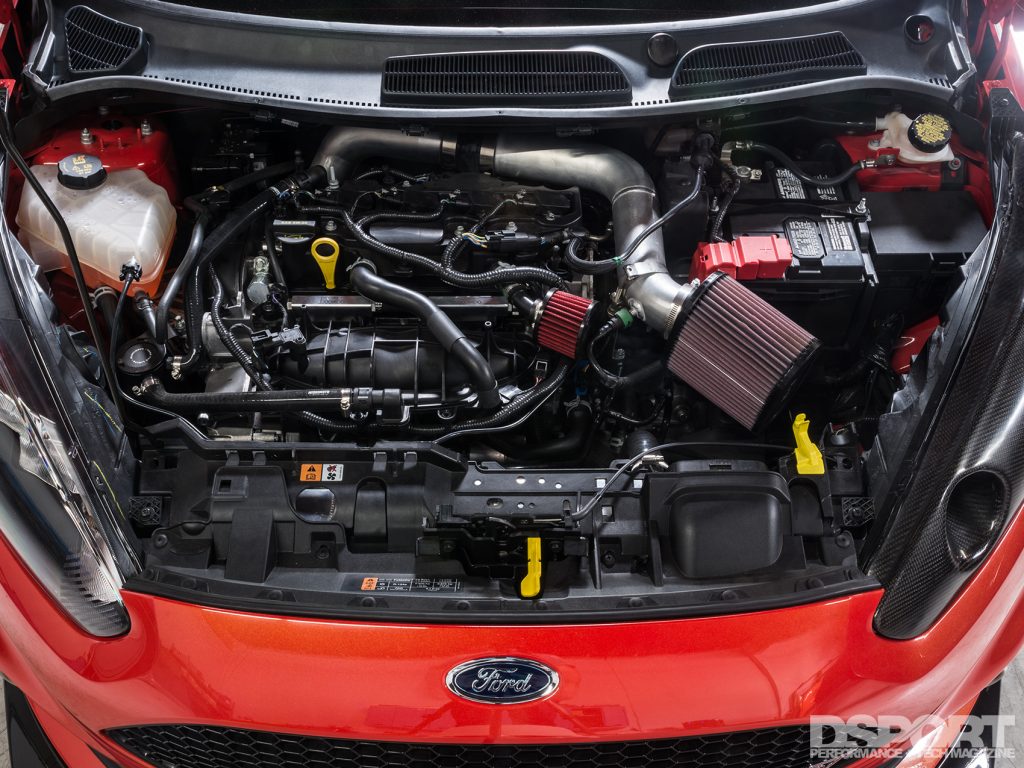 Even though the 1.6-liter ECOBOOST engine packs efficiency and performance into the Fiesta ST, it is still an OEM offering that focuses on keeping cost low, fuel mileage high and emissions under state and federal limits. As such, there were areas for improvement that were identified during our trips to the racetrack.

Over the past several months, our Technical Editor, Cameron Parsons, has been chipping away at lap times at Buttonwillow Raceway in the Fiesta. Cameron’s feedback from the driver’s seat has been spot on in dialing in the chassis and suspension. After the latest trip around the tarmac, Cameron felt that more top-end power would help get the Fiesta ST closer to the 2’00.000” mark. At that time, the car benefitted from a slew of bolt-on modifications, but we opted to take the Fiesta to the next level with an upgraded turbo system.

Considering that aftermarket support of ECOBOOST performance is still in the relatively early stages, we turned to FULL-RACE Motorsports in Phoenix, Arizona. FULL-RACE has been on the forefront of research and development with regard to the ECOBOOST engine lineup. Not only does FULL-RACE have years of forced-induction and manufacturing experience, it also has a close working relationship with Ford and BorgWarner. This puts FULL-RACE in the ideal position to tap into these resources when creating a powerful and reliable turbo upgrade for the Fiesta ST. 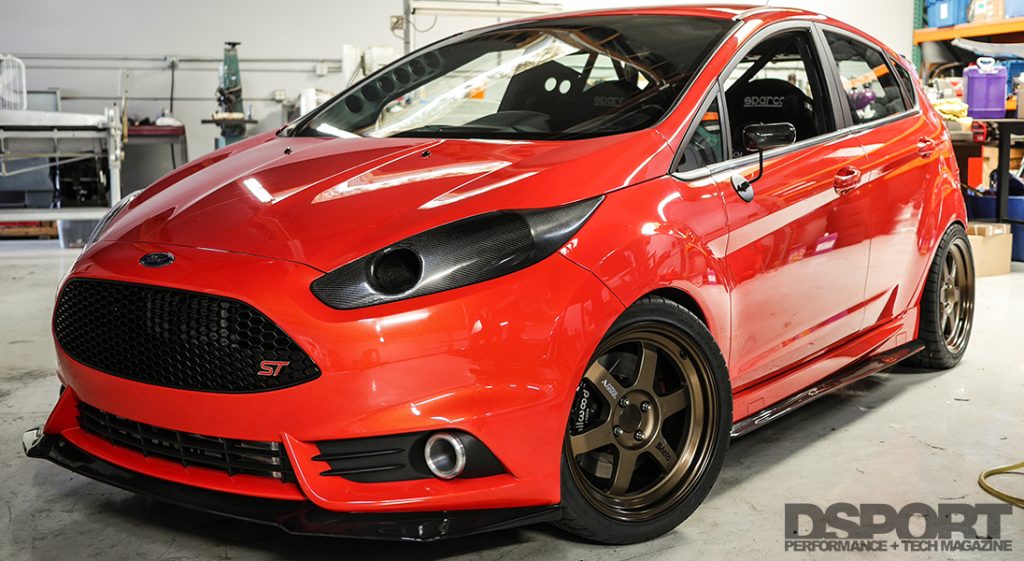 As of the last visit to Buttonwillow Raceway’s 13CW layout, the Fiesta is running consistent 2’08.00’’ lap times. We’re hoping that the new turbo system and additional power will get us closer to 2’00.00’’ times. 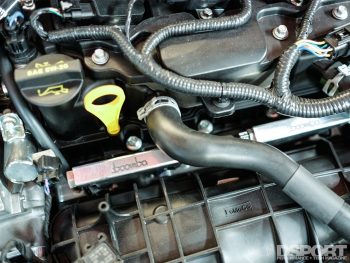 In evaluating the factory direct-injection setup, we’ve determined that the system should be able to support the upgraded turbocharger with the proper tuning. Ultimately, we will need to increase the capabilities of the factory fuel system to reach our goal of 400whp. As a future precaution, we’ve added a secondary port fuel injector system by Boomba Racing to meet the fuel demands at a later time. The Boomba Auxiliary Fuel Rail utilizes an intake manifold spacer to seamlessly mount four additional 50mm fuel injectors.

After shipping the Fiesta to Phoenix and discussing the details with Geoff Raicer of FULL-RACE, it was clear that certain criteria needed to be considered before moving forward with the turbocharger kit design. FULL-RACE needed to establish the ECOBOOST’s bottom-end strength, the capability of the fuel system and the adaptability of the vehicle’s ECU. The 1.6-liter ECOBOOST engine features a lightweight cylinder block that uses permanent mold technology with high-strength alloys in its construction. The extensive ribbing found in high-stress areas is the key characteristic to the engine’s skeletal strength. It is also reassuring to know that the factory pistons are of extremely high quality (for OE pistons). The pistons are hyper cast with a performance-enhancing coating on both the piston crowns and top ring lands. The piston pins also incorporate a diamond-like coating (DLC) that bumps up wear resistance. With this knowledge, we felt confident that the pistons could handle the extra demands of increased boost pressure. 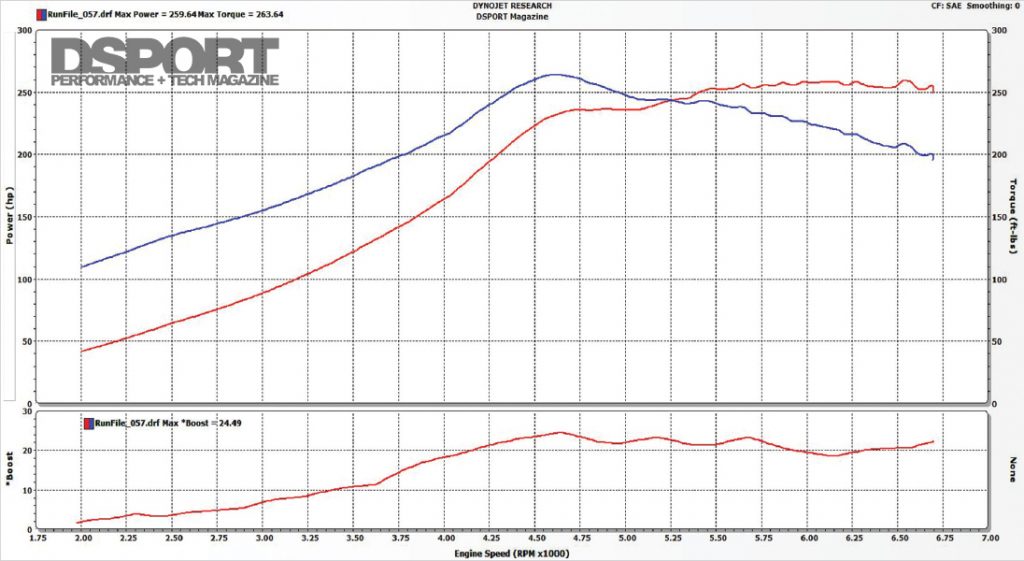 With the FULL-RACE EFR turbo kit installed and peak boost set to 24psi, the ECOBOOST engine pumped out 259.64whp and 263.64 lb-ft of torque.

While there was a trade off of low-end torque, the Fiesta is making more peak horsepower and torque with more power overall after 4,250 RPM up until redline. 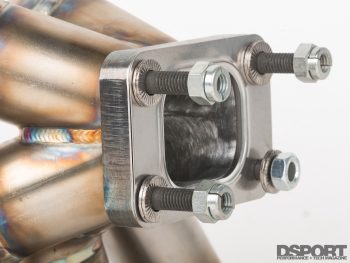 The centerpiece of the new turbo system is FULL-RACE’s proven tubular stainless steel, low-angle merge collector turbo manifold. The robotically-TIG welded manifold is truly a piece of art and its design is engineered to match the flow characteristics of the ECOBOOST engine. Hanging from the manifold, a BorgWarner EFR6258 turbocharger ideally pairs to the 1.6-liter displacement of the Fiesta ST powerplant. The EFR6258 features a 0.64 A/R T25 housing that delivers both the response and top-end power needed to propel the Fiesta around the racetrack. From the turbocharger, a 3.0-inch stainless-steel downpipe channels spent exhaust gasses to a FULL-RACE stainless-steel exhaust system. On the cool side of the forced-induction system, FULL-RACE plumbed in a massive front-mount intercooler core that’s connected by hand-fabricated aluminum charge piping. As a finishing touch, FULL-RACE constructed an aluminum intake that’s topped off with a K&N air filter behind a custom carbon-fiber induction “headlight”. With Bill Knose of Delicious Tuning calibrating the COBB Accessport, we strapped the Fiesta to DSPORT’s DynoJet 424xLC2 Linx dynamometer. As the BorgWarner EFR turbo spooled up to a peak boost pressure of 24.5psi, the ECOBOOST engine generated a maximum of 259.6whp and 263.6 lb-ft of torque at 4,600 RPM. The EFR6258 quickly produces peak boost pressure but holds it with minimal boost drop. This is with a soft spring in the EFR’s internal wastegate, which is ideal for pump gas (91 octane) tuning. By comparison, the factory turbo set to the same maximum target, would hit peak boost of 24psi but would taper off to approximately 14psi. For future modifications, we have the option of swapping in a stiffer wastegate spring for increased boost pressure handling. 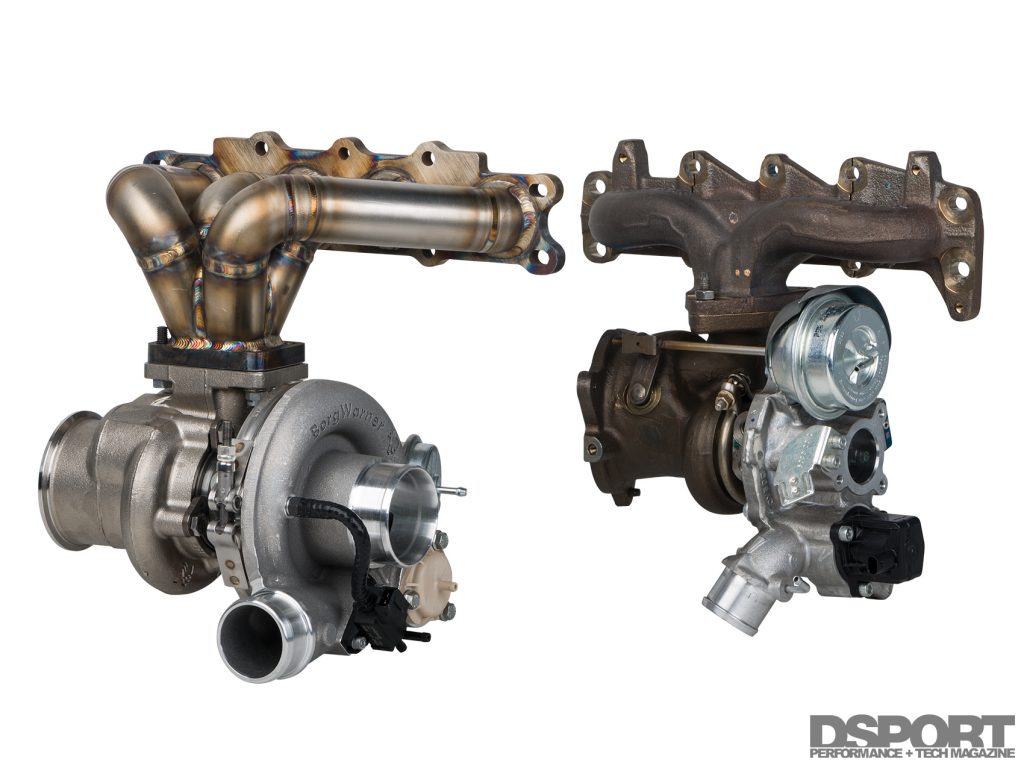 The larger EFR6258 turbocharger shifted the power delivery of the 1.6-liter ECOBOOST dramatically. Peak power increased by 55.34whp while peak torque dropped by 32.77 lb-ft. Peak numbers only partially tell the story however, as incremental gains increased in both horsepower and torque. After 4,250 RPM, the FULL-RACE turbo kit is generating more horsepower and torque than before. By 6,540 RPM, the Fiesta sports an additional 81.93 wheel horsepower and 65.75 lb-ft of torque and the increased power holds until redline. 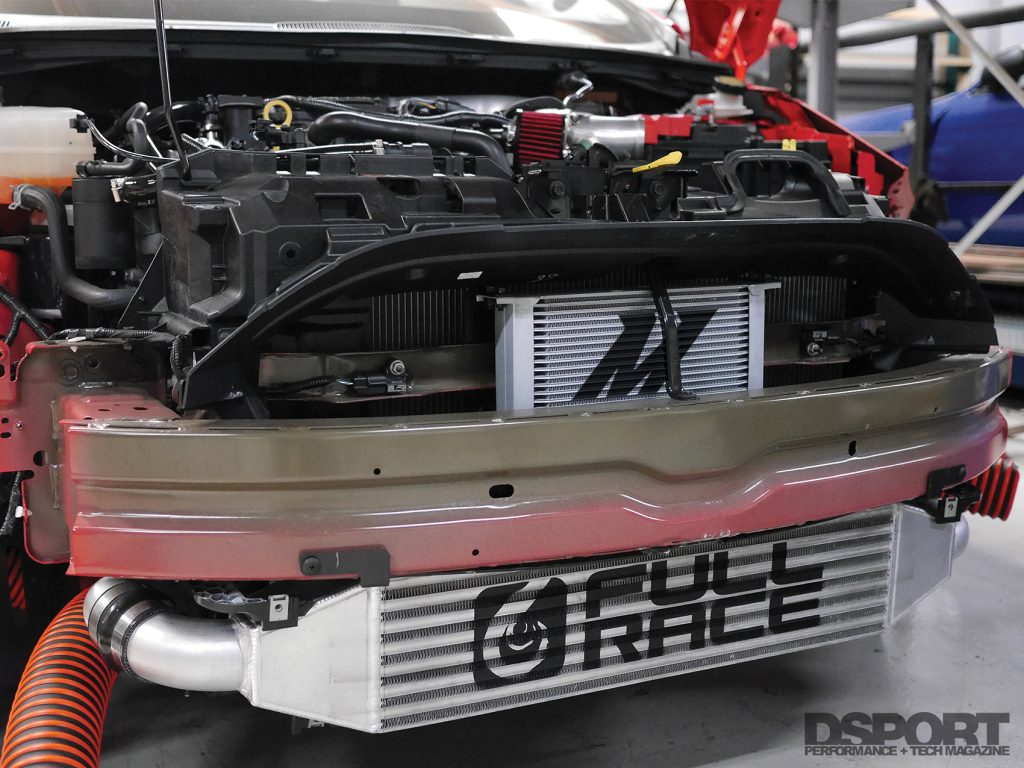 In order to maintain the car’s reliability, we decided to preemptively address the vehicle’s cooling systems with a performance radiator and oil cooler. This will assist in keeping temperatures down while we work to break the 2’00.000” mark at Buttonwillow Raceway. To increase the ability of the cooling system, we chose a two-inch thick, three-row, all-aluminum radiator by Mishimoto. This direct-fit radiator and fan shroud kit is said to reduce coolant temperatures by 10-degrees Fahrenheit. Since it is a bolt-on affair without any modification, it was an easy choice. To keep engine oil temperatures down, we selected Mishimoto’s Oil Cooler Kit for the Fiesta ST. This kit includes everything needed to plumb in the 19-row stacked-plate cooler up front behind the Fiesta’s grill. A billet aluminum oil sandwich plate spaces out the oil filter and gives the oil cooler an inlet and outlet passage to the engine with durable –AN fittings and stainless steel braided lines. Additionally, a Mishimoto baffled oil catch can traps oil and gasses before entering back into the engine’s intake tract. This will keep the ECOBOOST running clean on and off the track.

As we continue to push the limits of the ECOBOOST engine, we are building up a knowledgebase of information for this platform. As such, we’ve disassembled a spare engine and are analyzing the individual components in our machine shop for their theoretical and physical capabilities. At the same time, we are pushing the chassis on the racetrack to find its actual strengths and weaknesses. Stay tuned for the next round of modifications and updated track times.
On October 5, 2016