When LA Sleeve tasked us with building a company demo car that would have broad appeal, the Scion FR-S/Subaru BRZ/Toyota 86 platform was the obvious choice. The aftermarket support for these models is second to none. It’s a great platform that can be made to do just about anything. When LA Sleeve also asked us to make the project both unique and impressive, that’s when things got interesting.

While we could have explored building an all motor FA20 engine, a great deal of effort and expense may have resulted in a 2.25-liter FA20 engine that makes 200 horsepower at the wheels on E85. That wouldn’t cut it, especially considering that any of the off the shelf forced induction options would produce more power at less expense. Boost would be part of the equation.

Since we have already tested just about every supercharger and turbocharger system available for the BRZ/FR-S/86, we already had an idea of what to expect. With a turbocharger and one of Club DSPORT’s 2.1-liter stroker engines, we had already realized over 480 lb-ft of torque and over 560 wheel horsepower on pump E85 when running about 29psi of boost. We first considered a big bore, stroker FA22.5 (2.25-liter) engine teamed with a turbocharger. The additional displacement of the engine would have allowed peak boost to be realized at about 4,900RPM with the same turbo with torque peaking at about 515 lb-ft at the same boost level. Since the engine would have increased power handling due to the LA Sleeves, we could also run a larger turbo to make 600, 700 or 800whp. However, we then considered the power handling of the driveline. Currently we don’t have a transmission solution for our 2.1-liter FR-S turbo that we trust to track or drag. There is no way the factory transmission can live when the torque output is nearly four times the original output of the engine. 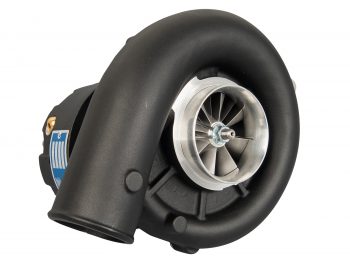 At the end of the day, our decision for which supercharger system to run was made easy. Only the Vortech V3 Si supercharger was theoretically capable of the 500whp target, although no one had done it yet. 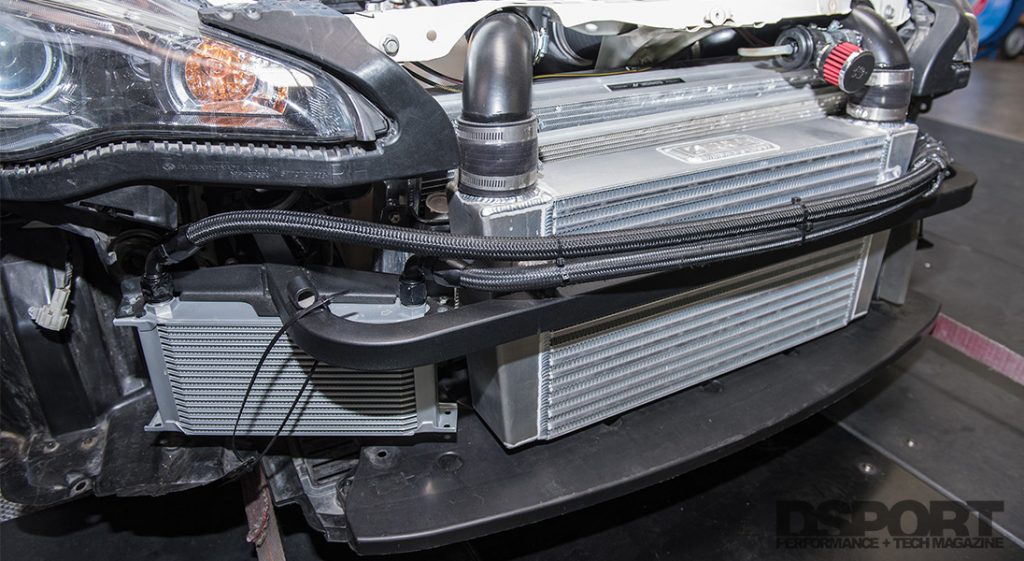 The Full-Race front mount air-to-air intercooler proved to be effective when previously used with a Full-Race turbo kit to support over 565whp. We teamed it with a custom Vortech V3 Si supercharger and Voretch Maxflow BOV.

While Vortech offers the bracket, pulley and V3 Si supercharger for the BRZ/FR-S/86, they don’t offer an intercooler system for that power level. Since we already knew that the intercooler system used with the Full-Race turbo system could support the flow and cooling needed at 500whp, we opted to use it with our Vortech V3 Si setup. To use this intercooler with the Vortech supercharger required some custom charge pipes be made and that a Vortech Maxflow Race blow-off valve be fitted on the compressor outlet charge pipe. Since the V3 superchargers have a self-contained oiling system, there was no need to plumb a pressurized oil feed or drain to the engine. If you don’t mind the added complexity of installing a feed line and drain, a V-1 H/D Si supercharger can be chosen instead. This option is rated a slightly higher recommended maximum speed (55,000 RPM vs. 52,000 RPM), but it will run a bit slower as the internal gearing features a lower step up ratio. 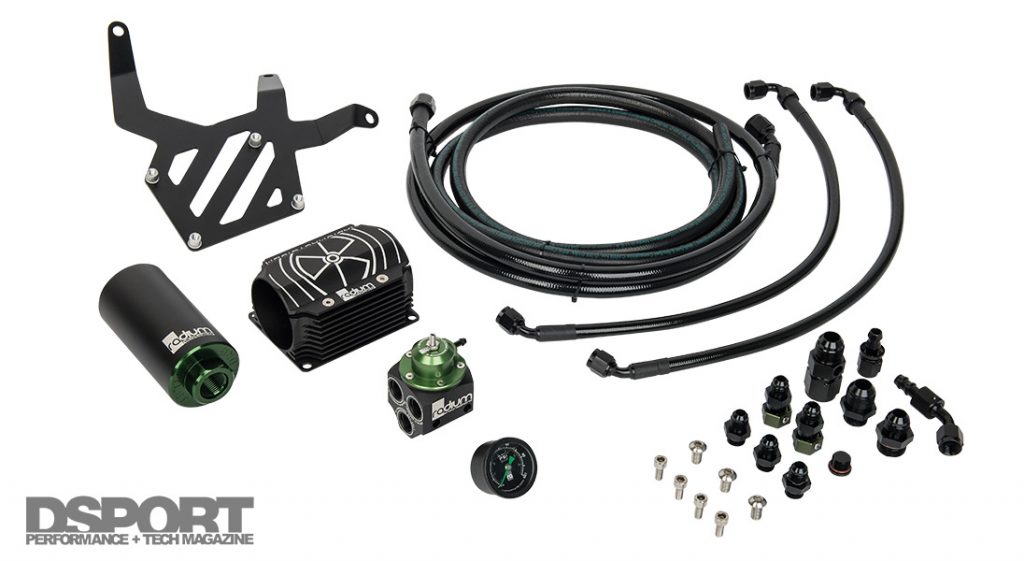 Normally a fuel system capable of supporting 500whp on E85 requires some custom lines and a good amount of time. Thanks to Radium Engineering, everything we needed was available as a bolt-in solution.

The fuel demands of a 500whp engine on E85 are the same as a gasoline engine at 735whp. It’s a pretty high demand especially when you consider that the pump will be operating at about 80 psi to overcome the rail pressure, boost pressure and pressure losses in the system. Normally planning out a bulletproof system would require a great deal of fabrication. Fortunately, everything that was needed was available off the shelf from Radium, Walbro and AUS Injection. Radium supplied the dual pump hanger kit, dual pump wiring kit, fuel line kit and fuel rail for the Walbro 340lph pumps and 1150cc/min injectors from AUS. While we tested the system on the dyno with a single pump and proper fuel line pressures were maintained, employing a second pump erases any doubt that there will be ample pressure regardless of the on-the-track conditions. 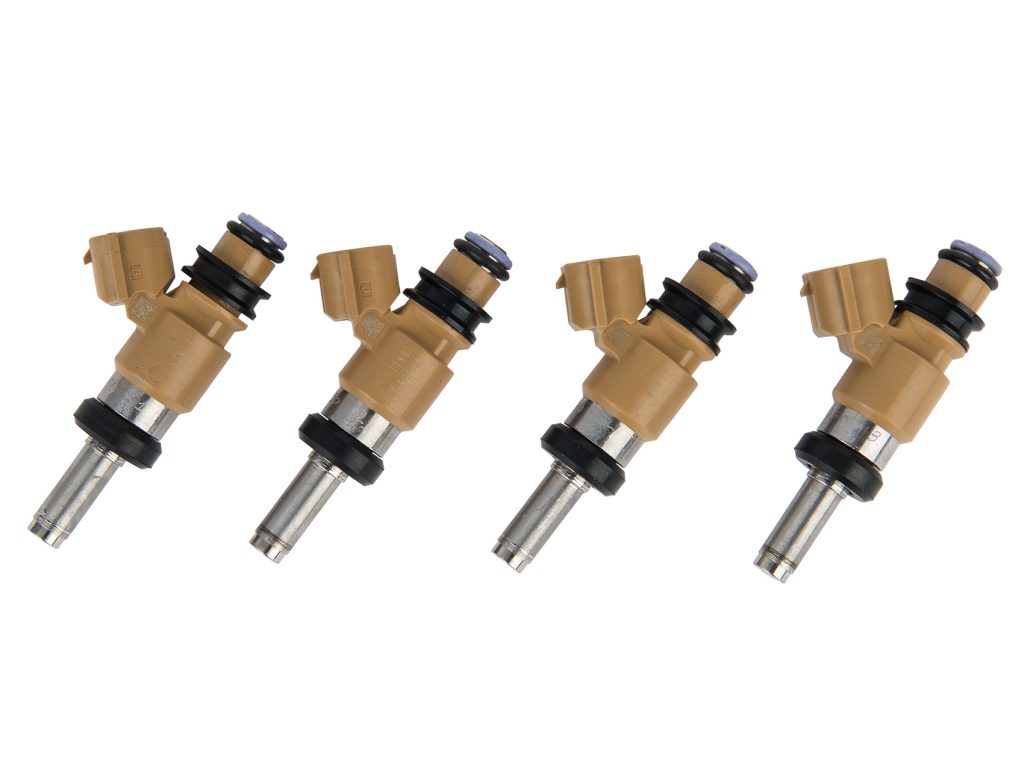 AUS Injection supplied a set of 1150cc/min injectors to send the necessary additional fuel to support over 500whp on E85. 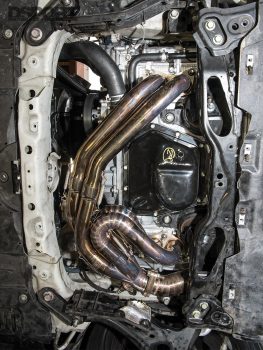 While getting 500whp worth of air and fuel into the engine is important, getting 500whp worth of exhaust and waste heat out of the engine is equally as important. We opted for a BLOX Racing unequal length stainless header. This stainless steel 4-into-1 header features 1.75-inch primary tubing and a 2.25-inch collector. This was teamed with a BLOX Racing overpipe and a BLOX Racing front pipe. The system joins a Full Race 3-inch cat-back exhaust system. With all of the factory cats eliminated in this configuration, the setup is only for the racetrack. As for the sound levels associated with this configuration… it’s somewhere between deafening and torture. This is one area we hope to address in finding a more streetable and ear-friendly configuration.

While the exhaust helps carry much of the waste heat out of the engine, the cooling system also needed upgrades to reject additional waste heat. A drop-in Mishimoto radiator and fan shroud kit have kept things cool during all of the dyno testing, while a Mishimoto oil cooler should keep oil temps in check when this BRZ visits the track.

Since a turbo system would make too much torque for the stock transmission, we needed to hit our power target with the least amount of torque output possible. As a secondary benefit, a more reasonable torque output would also reduce the likelihood of wheel spin. 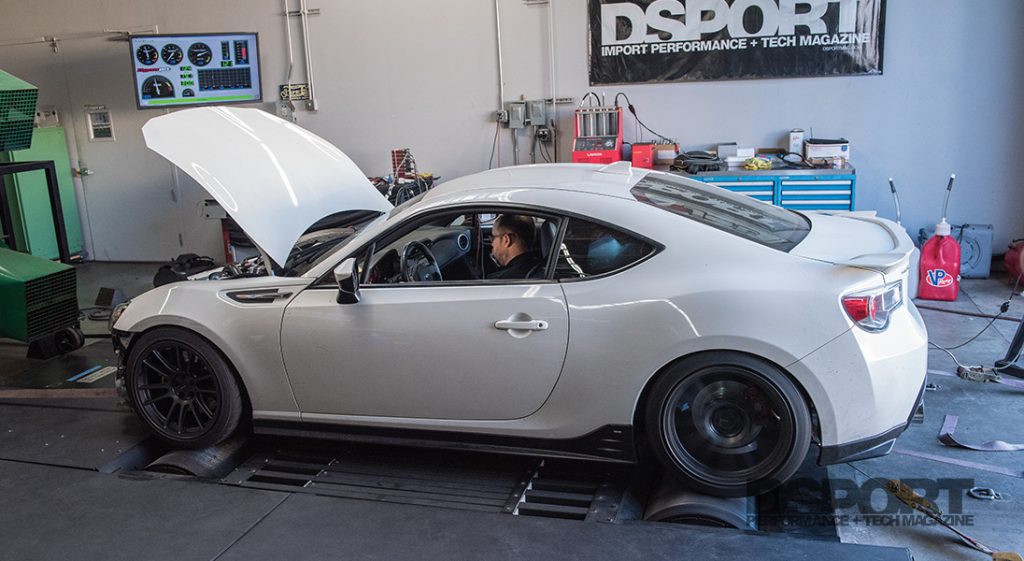 We started the dyno testing on 91-octane and the largest pulley (3.48-inch OD for lowest boost). When we hit 305whp at 7,000RPM (10.5psi of boost), we didn’t know if we should be concerned or celebrating. On the one hand, this was considerably better than the 232whp realized on the standard Vortech kit at 8psi. On the other hand, it was just 60 percent of our target power. It was time to try some smaller pulleys and see the results. With the 2.87-inch pulley in place, power climbed to 339whp, with boost checking in at 14psi. The smallest 2.62-inch pulley netted 364whp and just 16psi of boost pressure. Things didn’t seem to be adding up. We should have been making considerably more boost based on the pulley ratios.

The following day we opted to switch to E85 to see if the 91 octane was the limiting factor and to also try a Gates RPM supercharger belt instead of the standard Gates belt supplied. While you should never change two variables at once if you want the best data, we were driven by the fact that we were so far from our target. This session netted some more encouraging results. Power now reached a peak of 471whp with boost checking in at 24psi. Belt slippage was significantly reduced as we could see the difference in the boost curves before and after the change to the RPM-series belt (we consider this a must for any supercharged application). While promising, we were still 29 horsepower shy of our goal. We could have cheated and set the dyno reading to STD instead of SAE then said that 485whp is close enough. We didn’t. This challenge and opportunity would instead serve to broaden our knowledge. 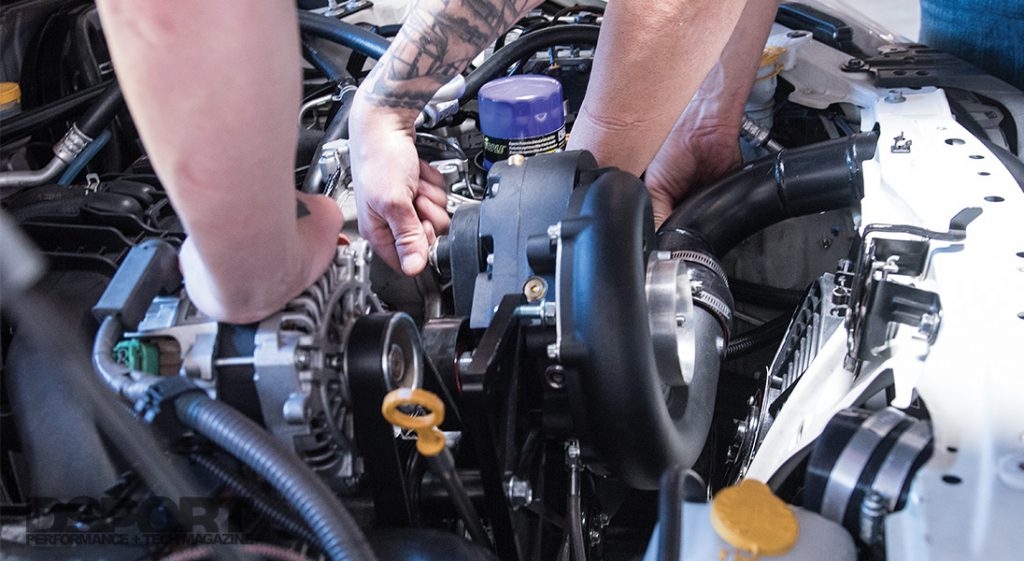 To further limit belt slippage, we ordered a shorter Gates RPM belt (hopefully adding some tension) and we also sent a set of pulleys out for Carbonite treatment. This treatment roughens the pulley surface to aid in limiting slip. Why is slip such an issue? Let’s not forget that the Vortech supercharger is a compressor. It’s moving about 1,000cfm of air at a peak pressure ratio of 2.7:1 (27psi before intercooler). That takes somewhere in the neighborhood of 80 horsepower of work to accomplish. While we plan to expand on the belt and pulley treatment data next month, the bottom line is that we were able to produce 504whp at 25psi of boost. Mission accomplished.