When it comes to the R34 GT-R’s RB26 engine, its personality is established by the choice of turbo system. For two decades, turbo upgrades for the RB26 provided either a solid mid-RPM performer for street and track use or a top-end screamer for drag racing. If you were content with 500-600 horsepower, there could be some semblance of response. If you wanted more power, the laggy boost response of a larger turbo would mean that low and mid-RPM performance would be sacrificed. Fortunately, technology has provided a solution. Text by Michael Ferrara // Photos by Joe Singleton and Staff 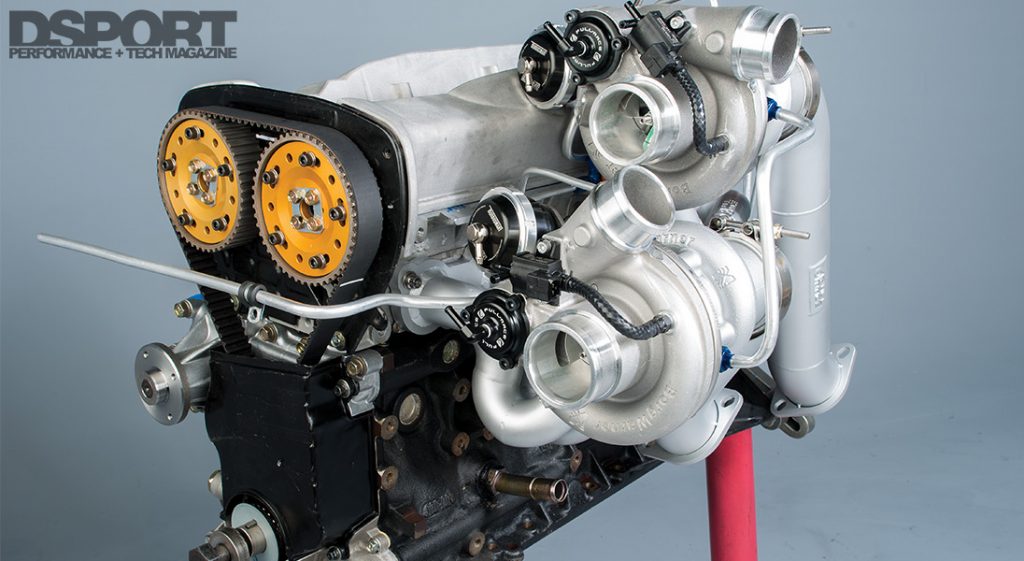 Stroker kits, nitrous-oxide systems and even aftermarket variable valve timing systems (HKS VALCON) have all been effectively used to improve response. The RB26’s relatively small displacement and short stroke provide a challenge for it to produce enough exhaust flow to get larger turbochargers into boost. Increasing the bore of the engine to 87mm (86mm original) and increasing the stoke from 73.7mm to 77.7mm increases the displacement of the engine by about 8 percent. This is the popular 2.8-liter upgrade for the RB26 which will get the engine to peak boost about 250 RPM sooner on turbo combinations that reach peak boost on the RB26 at 3,000 RPM to as much as 400 RPM sooner on bigger turbos that reach peak boost around 5,400 RPM. Nitrous-oxide systems can also get the engine to peak boost from 250 to 600 RPM sooner depending on the size of the turbos and the amount of nitrous-oxide injected. From our Project R33 GT-R, we’ve used both of these solutions effectively. While we haven’t personally experienced the response improvement from the HKS VALCON system, we do know that cam timing changes to the intake cam timing (through adjustable cam sprockets) can deliver significant improvements to boost response. While all of these systems are effective, new turbocharger technologies and turbo system options may make them unnecessary. 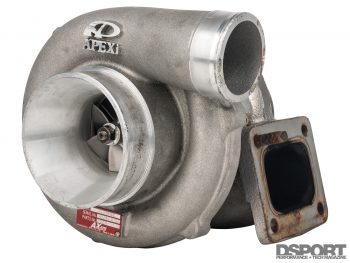 In 2001, the A’PEXi AX-series turbocharger system was introduced for the R32, R33 and R34 GT-R. The system featured a single turbo, turbo manifold, external wastegate, downpipe and all of the plumbing and support hardware needed for the installation. The turbo itself featured a 62mm inducer, 57-trim compressor wheel fitted with zero clearance into the housing using what was dubbed an “airlick.” This technology was implemented to increase compressor efficiency. With a single-scroll, 0.98 A/R (P25) turbine housing and external wastegate, the ball-bearing turbo had respectable boost response for its time with the ability to support up to 600whp. Unfortunately, the absence of a twin-scroll turbine housing option didn’t allow for optimized boost response at lower engine speeds. While A’PEXi built the exhaust manifold with a T4 flange and a twin-scroll turbine housing in mind, the turbine housing supplied was only single scroll. 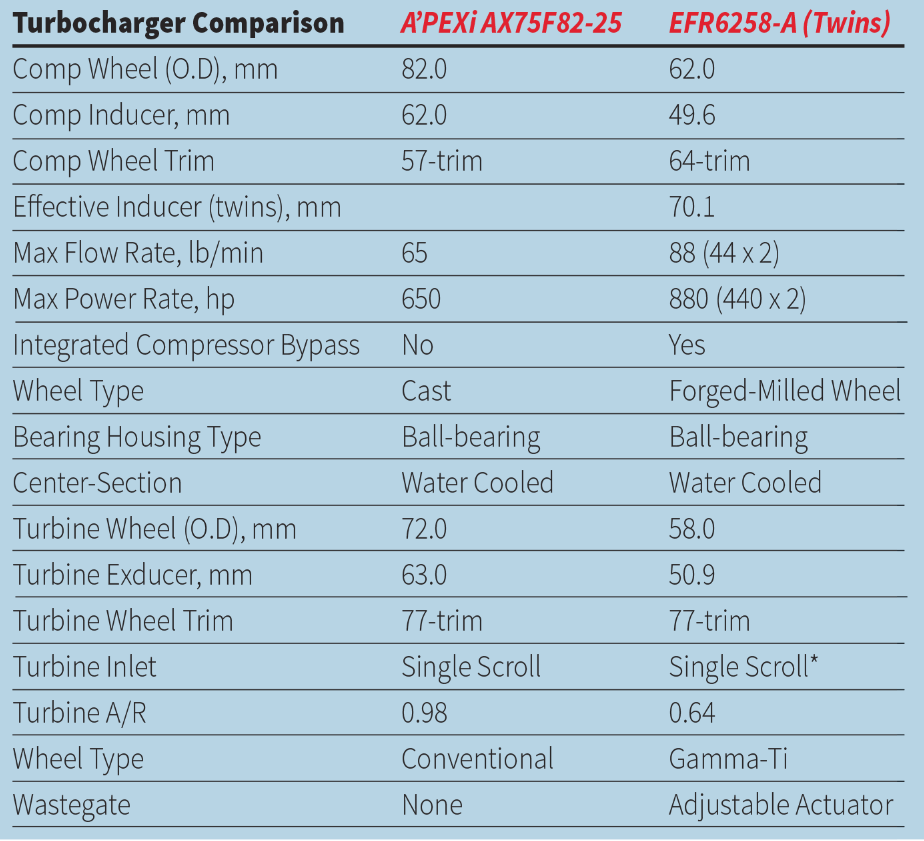 * effectively a twin-scroll when used on twin turbo application.

By comparison, the Full-Race Motorsports twin-turbo system featuring twin BorgWarner EFR6258-A turbochargers uses the latest technologies along with a configuration optimized for response and power. Each of the Full-Race manifolds pairs a trio of cylinders to each turbo. In separating the cylinders that are in consecutive firing order from each other, the twin turbo configuration offers the same boost response improvement as a twin-scroll turbine housing on a single-turbo system. Full-Race engineered the system to position the turbos so that any Y-pipe that fits the factory turbo system will bolt up to the outlets of the EFR turbos. As for the EFR turbos, there is no shortage of technologies that increase response and efficiency. The turbine wheels are made from an intermetallic compound called Gamma-Ti. Gamma-Ti is a special titanium aluminide compound that has a density that is only half of Inconel 713C (a common alloy used for the turbine wheel in most turbochargers). Hence the Gamma-Ti wheel weighs half of a conventional turbine wheel (and also just half of the inertia). Combining this low inertia turbine wheel with a dual ceramic ball bearing center section ensures that both steady-state and transient boost response are maximized. Diving into the compressor section, the BorgWarner EFR uses extended tip height geometry, leading-edge aerodynamics and a forged-milled wheel construction.  These technologies provide exceptional compressor efficiencies over a wide range of flows and pressure ratios. A compressor bypass valve assembly is integrated into the compressor housing to help provide a very forgiving surge line. Since these turbos feature an integrated wastegate and actuator assembly, there is no need for the additional expense and complexity of external wastegates. 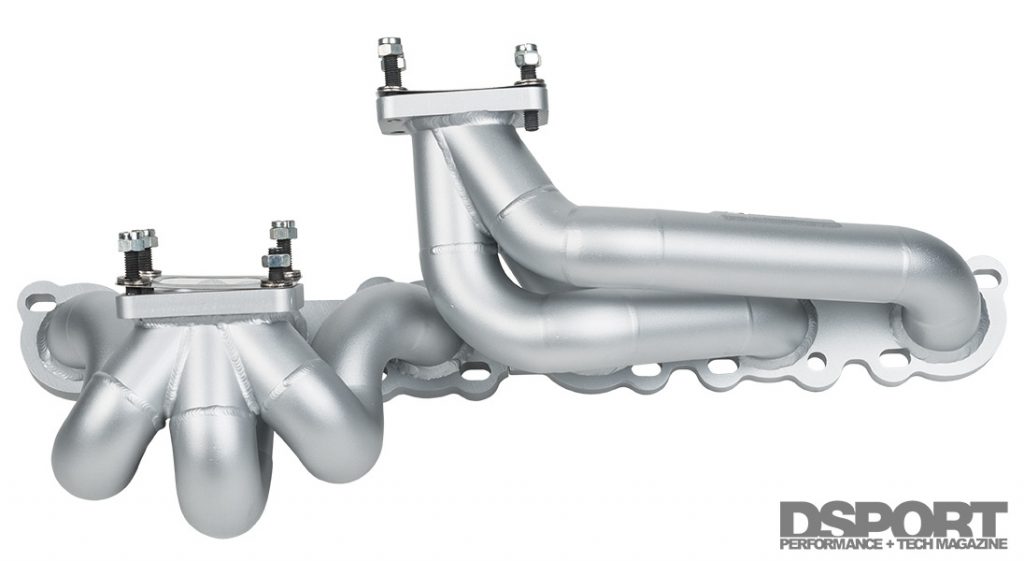 The Full-Race Motorsports manifold features stainless steel construction and stock turbocharger placement, permitting the use of a stock, bolt-on  or custom Y-pipe solution.

We first got a taste of the response and performance of the Full-Race twin-turbo system featuring EFR turbos nearly four years ago when we dyno tested an R34 GT-R cover car with the system. The extremely responsive boost response curve caught our attention immediately. The system made the engine seemingly grow from 2.6-liters in displacement to 3.2-liters in displacement based on the low-end torque production. As for power output, the system won’t struggle to deliver over 650 whp on 91-octane or upwards of 800 whp on E85 with a properly built RB26DETT.

We only had a few hours to begin dialing in the new turbo system before our Project Time Capsule R34 GT-R needed to make its Las Vegas appearance at the 2016 SEMA Show. Even so, we were able to see over 620 wheel horsepower just on the wastegates. 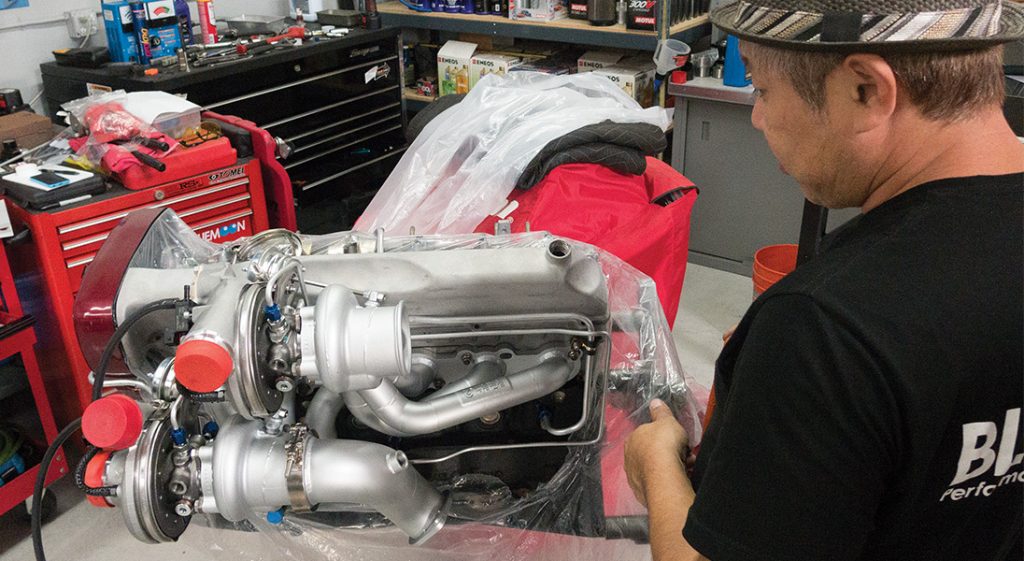 While the Full-Race/EFR turbo system includes the majority of the components needed, it doesn’t include everything needed for the install. The oil feed, oil drain and coolant lines for the turbochargers must be made along with the downpipe (Y-pipe). The compressor inlet tubes and filter assemblies must also be fabricated. Shingo Yugami of BLUEMOON Performance decided to make up the hard lines with XRP performance adapters and fittings. Fortunately, Shingo was able to use one of the RB26 engines from Club DSPORT to build the lines on an engine stand instead of in the engine bay. Shingo also performed the removal of the original turbo system and installation of the new system. Before installing the turbochargers in place, we opted to swap out the original wastegate actuators for Turbosmart actuators. The Turbosmart actuators allow adjustment of not only the preload, but also the base spring pressure in the assembly. The dual-port configuration can also be used to improve boost response on applications where high exhaust back pressures may prematurely open the wastegate.

The perfect exhaust would weigh nothing, flow large amounts of exhaust without back pressure and dampen the exhaust volumes to an impeccable note. Our goal was to come as close to perfect as possible. To save weight and offer a minimum restriction to exhaust flow, we opted for the Expreme Ti 90mm titanium cat-back exhaust system from TOMEI POWERED. Weighing in at just 15.5 pounds, it saves over 24 pounds compared to the OEM exhaust. While the Expreme Ti system is smaller in outside diameter than the 95mm A’PEXi GT SPEC system it is replacing, the difference in inner diameter is only a couple millimeters as the wall thickness of the titanium system is just 1.0mm instead of 3.0mm. 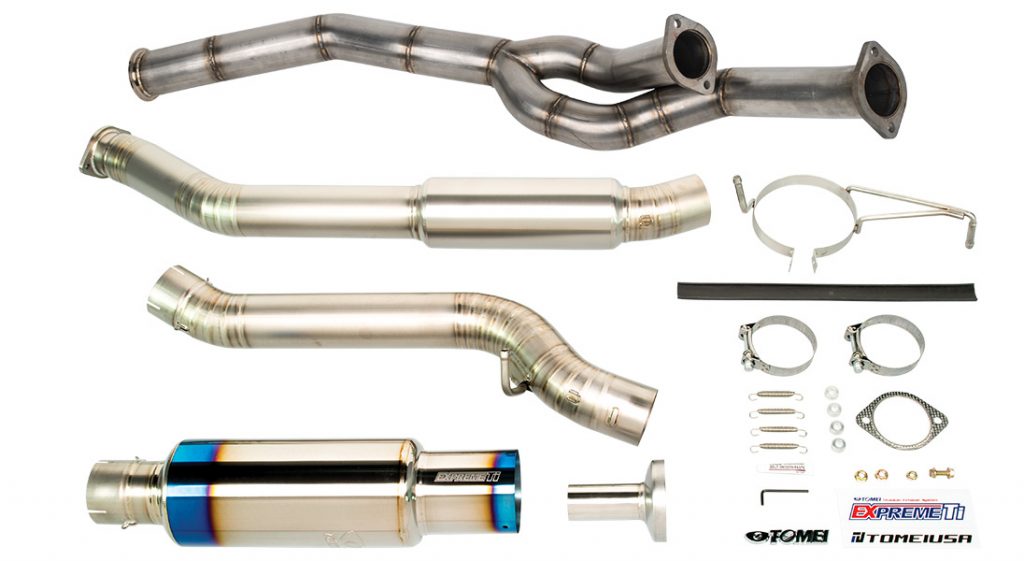 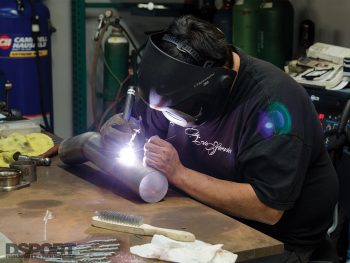 To ensure that the maximum diameter is maintained throughout the exhaust system, a custom downpipe and connection needed to be made between the turbine outlets and the TOMEI POWERED Expreme Ti exhaust system. Fortunately, we were able to get Peter Yeung of Kami Racing Service to perform the fabrication at our DSPORT workshop. Peter was able to design and fabricate a custom stainless-steel downpipe that took each 75mm outlet and combined them into a single 90mm pipe with a Y transition. Attaching the stainless-steel downpipe to a titanium exhaust posed a challenge (dissimilar metals cannot be welded together). Peter decided the best course of action was to mate the two with a V-band connection. This would mean cutting off the necked down flanged entry of the Expreme Ti exhaust (it’s designed to bolt up to the OEM cat) and replacing it with a V-band clamp where it was back to 90mm. Normally, V-band connections can only be found in stainless steel, but Ticon Industries offers titanium V-band assemblies. For the stainless-steel downpipe, Magnus at Club DSPORT machined a custom stainless-steel V-band flange to mate with the profile of the titanium V-band flange. Peter spent the better part of three days to get everything perfectly aligned, tacked and welded. The end result was a piece of functional art that maximizes performance. Compared to the 75mm downpipe that was used with the single turbo setup, the 90mm piping offers nearly 50-percent more flow potential.