During the weekly DSport magazine meeting, it is decided that we will try to get as many vehicles race-ready for an upcoming import drag racing event at California Speedway in Fontana, California. Our plan is to have our Project STi, Project Street Tire EG Civic and our Project GT-R at the event for some shakedown runs. With the closure of Carlsbad Raceway and the hectic work schedule at DSport, opportunities for a trip to the dragstrip are extremely limited. After the meeting, all of the project car managers scramble to put together “to-do” lists for their vehicles. As for the GT-R, the list includes a visit to the dyno, a four- wheel alignment, a wheel and tire swap and the replacement of a front- driver-side axle.

If you recall from the last installment on Project GT-R, we were experiencing a major issue with the Skyline pushing to the left under hard acceleration. The problem was so bad that we would have to lift off the throttle to keep the GT-R going straight while making a pass at the drag strip. This problem affected both driver safety and performance. While we had the tools to perform the four-alignment ourselves (Tru-Line Laser Alignment system), we didn’t really have the time. On the advice of XS Engineering, we made an early-morning visit to Dave’s Frame and Alignment of Huntington Beach, California. Our hope was to have a set of adjustable tension-rods installed before a four-wheel alignment was performed. Once the vehicle was on the rack and in the air, the main culprits of the problem were quickly identified. The rear anti-roll bar had become detached on the driver’s side and the front anti-roll bar was disconnected at the passenger side. To exacerbate the situation, the rear bar was actually positioned in such a way that it was preloading the suspension. Once these problems were corrected, attention was turned to the alignment. The factory non-adjustable tension rods were removed and the adjustable tension rods were installed. These adjustable tension rods allow the front wheel caster to be adjusted. By increasing the amount of caster, a vehicle’s high-speed stability is increased. Our front caster was set to 4.5 degrees before the toe-in and track adjustments were made. The rear suspension was first squared to the frame before the toe-in was set to .1mm. In the front, toe was set to zero. During the test drive, the improvement could instantly be felt. Not only did the car go straight, it also exhibited more high-speed stability than ever before. At freeway speeds of 80 mph, the car now felt as if it was only going 40mph. This was a vast improvement. To improve the vehicle’s ability to put the power to the pavement, Dale of Dave’s Alignment suggested that we source a set of rear upper control arms that allow for additional camber adjustment. By reducing the amount of rear camber (currently at 2.25 degrees), the rear tire’s contact patch will be increased. We are now on the hunt for a pair of adjustable rear upper control arms. 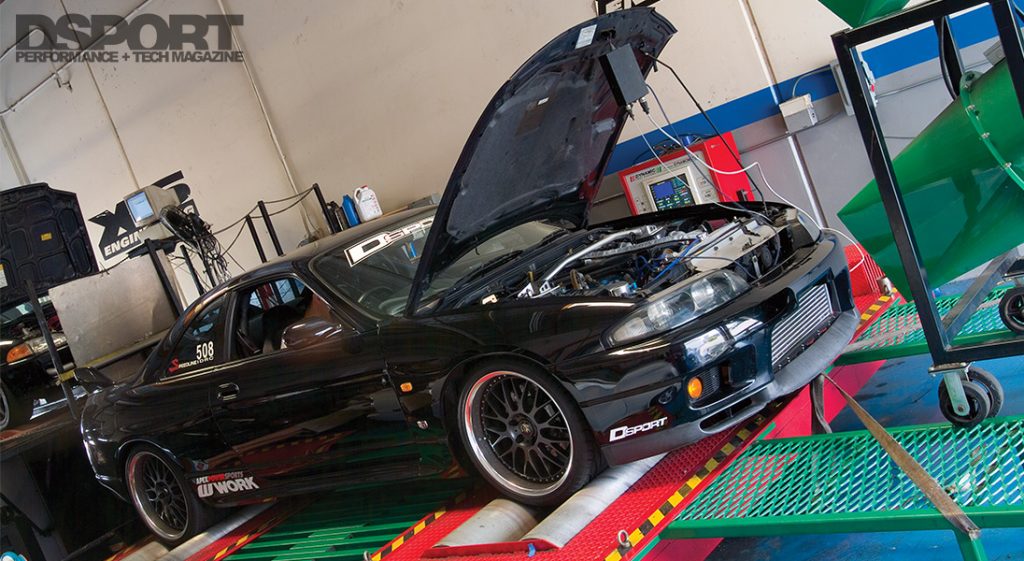 With both the four-wheel and two- wheel dyno available for an entire day, we wasted little time in strapping down our Project GT-R and Project Street- Tire EG. After a pass was made on one vehicle, we’d make our way to the other vehicle to make a pass on the other dyno. Since we needed to allow for cool downs between runs, we effectively were able to tune two vehicles in the time it takes to tune one.

After installing a fresh set of NGK Iridium Racing Plugs (R7433-8; Stock no. 4889), we initiated our session by first dialing in the intake camshaft timing on the GT-R. After we were happy with the results, we proceeded to fine tune on 91-octane with the boost set to 1.40 kg/cm2. Since we had already changed the MAP sensor from the A’PEX Integration 2.85-bar (absolute) unit to the AEM 3.5-bar (absolute) unit (p/n 30-2130-50), there was just a bit of tweaking needed to the fuel and ignition maps. Fortunately, the amount of tweaking needed was minimal as the Power FC allows the tuner to enter the range and offset values for the MAP sensor (for anyone using the AEM 3.5-bar MAP sensor with the Power FC, set the scale value of 60300 and an offset value of 7600). With the tank nearly empty of 91- octane gasoline, we proceeded to add five gallons of VP Racing Fuels C16. This blend of race gas is suited for turbocharged and supercharged engines. The motor octane checks in at 117, making the fuel optimal for high- boost applications. 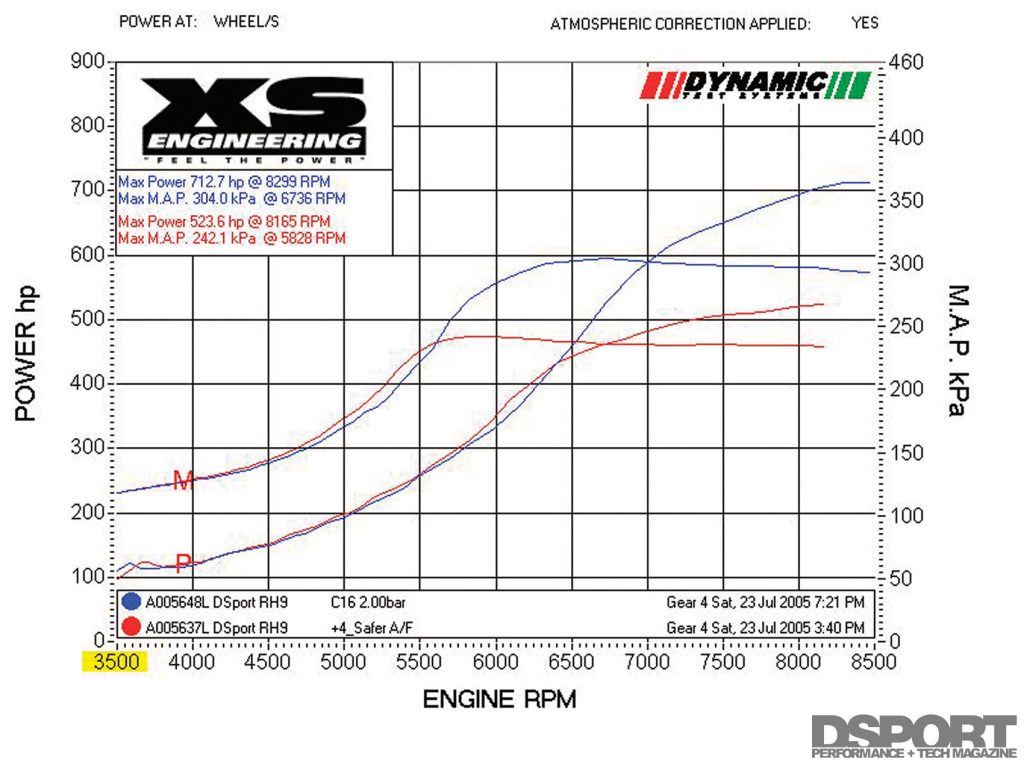 With just a few day days remaining before the race, we made a new checklist of the items that needed to be addressed. In addition to the wheel-and-tire swap and the replacement of a front-driver-side axle, a shift light and a scramble- boost switch were added to the list. Today, we also find out that Sami will not be able to bring the STi to the track. The car is ready, but Sami has to attend a family reunion on the weekend of the race. 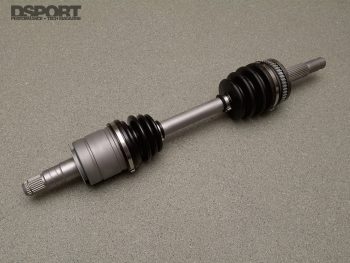 Our injured (broken boot & missing grease) axle was brought to Advanced Technology (AT) Axles of Garden Grove, California. AT Axles disassembled the axle assembly, thoroughly cleaned the parts and shot- peened the shaft and stubs. This process not only removes stubborn rust, it also helps to stress relieve the surface of the axle. Once this process was complete the tripod was reassembled, and the new boots were filled with grease. The rebuilt axle was installed and now the car is ready to go. It’s our hope that this axle will survive until the Moore Performance upgraded axles arrive.

Our replacement DBA brake rotors haven’t arrived yet, so we decided to turn the original rotors and install a set of new pads. We also took this opportunity to upgrade the factory rubber brake hoses with a Goodridge high-performance D.O.T. brakeline kit. The result is a solid pedal that has no problem slowing down the vehicle.

Today, we picked up our TE37 wheels from Olympic powder coating. Unfortunately, the color we picked didn’t look like we thought it would look. Instead of a gold color, we ended up with a “baby food” looking color. With no time for a color change, we mount the BFGoodrich 275/35R18 Drag Radial tires. 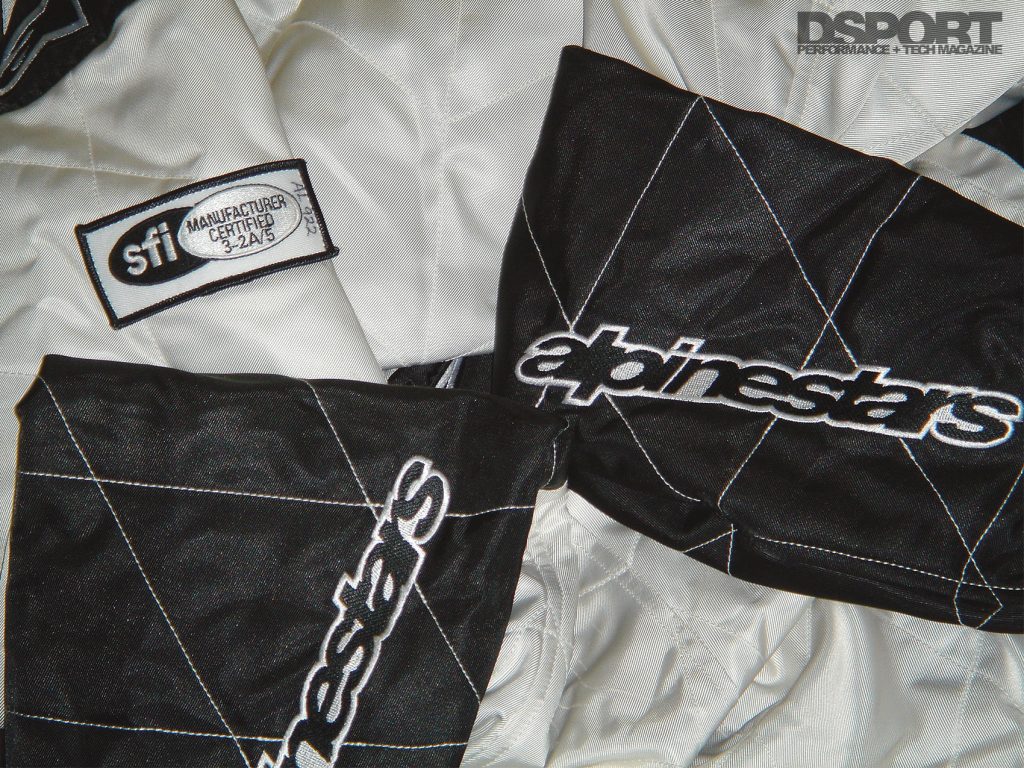 We also pick up our Alpine Star driving suits today. We selected the GP Pro Suits which are FIA and SFI approved. The fit, feeling and quality of the suits was awesome. We now looked so good that we had to make sure our cars were ready to run well.

The plan is to hit the dyno in the morning to tune the GT-R to some higher boost levels (2.2 kg/cm2 and 2.4 kg/cm2), but an overload of office work prevents a visit to the dyno. Fine tuning will have to be done on the track. At night, we wire up the shift light and attempt to get the scramble boost to work with the FC Datalogit box. The shift light works fine but the scramble boost function and anti-lag function fail to work. 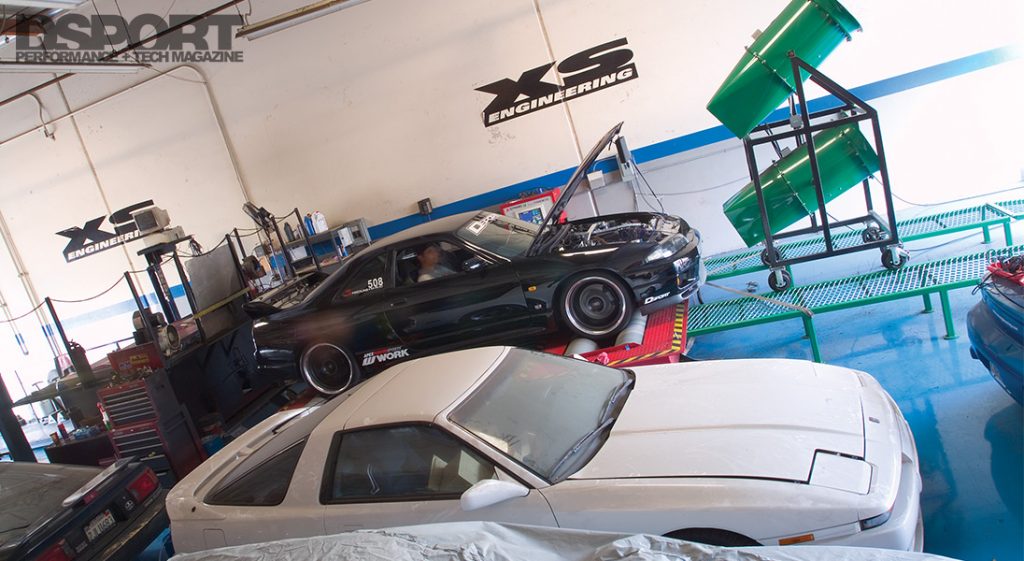 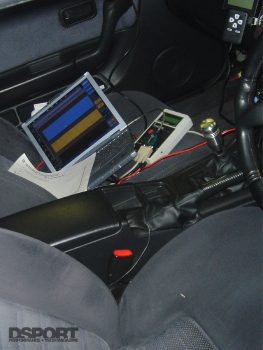 We set out from Huntington Beach at noon for California Speedway in Fontana, California. We arrive in Fontana at 1:15pm. The temperature is over 100 degrees. The car goes through tech and we wait for our class to be called. This Battle of the Imports turns out to be a battle of the heat strokes as everyone tried to keep as cool and hydrated as possible. Our first opportunity to make a pass came at 5:15pm. With the boost set to 2.0 kg/cm2, the trap speed was exactly what we expected 136mph. This was what our Drag Race Analyzer said we would hit. As for the elapsed time, we only managed a 10.692-second elapsed time with a 1.822-second 60-foot time. The analyzer said we should have 1.61- second 60-foot times with 10.135- second elapsed times. Obviously, we were far off in the traction department. The good news is that the Skyline went straight as an arrow. Before the next run, we aired our tires down from 30psi to 25psi. We also cranked up the boost to 2.2 kg/cm2. Unlike the first run that had no burnout, we were forced to do a burnout as there was no dry path around the burnout box. The burnout and the lower tire pressure definitely helped. Our 60-foot times dropped to 1.643 seconds, just .043 seconds off our simulation time of 1.600 seconds. The elapsed time also significantly improved to 10.345-seconds. Unlike the first run that barely hit the rev limiter before the finish, this run had us on the rev limiter for some time. 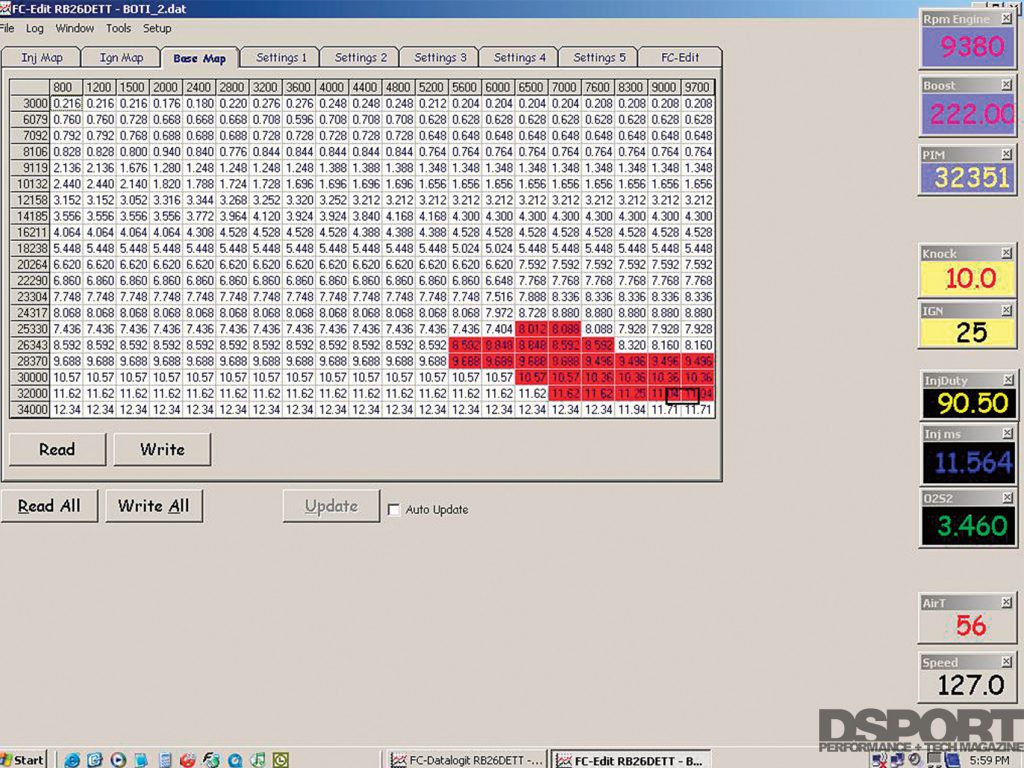 A decision had to be made. On the next pass, we either had to shift into 5th or raise the rev limiter to the 9700rpm range. With the rev limiter already set at 9300rpm, we decided to take the safer route and attempt to shift into 5th on the next pass. After all, we are running on the original 40,000-mile factory Nissan bottom end. The launch wasn’t as good on this pass with the 60-foot time checking in at 1.725 seconds. The elapsed time also suffered, checking in at 10.443- seconds. On the positive side, the shift to 5th gear helped us reach a 141mph trap speed. The trap speed was indicative of putting 790 horsepower to the wheels (930 horsepower at the flywheel). For our fourth and final run, we raised the boost to 2.30 kg/cm2. The 60-foot featured a decent 1.684-second launch. Unfortunately, the tuning wasn’t optimized at this higher boost level. As a result, the GT-R managed a 10.385 at 141mph again. 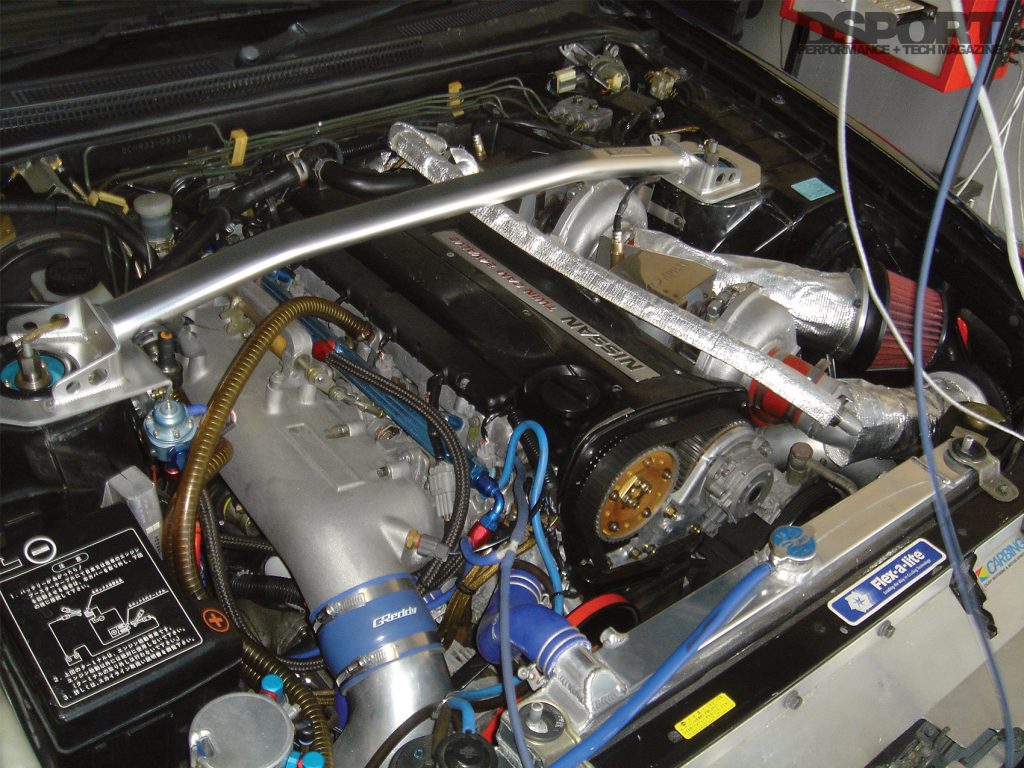 Our best elapsed time of 10.34- seconds and our peak trap speed of 141mph were pretty rewarding. After all, this was nearly a full second quicker than our previous visit with our trap speeds increasing by 8 mph. Our 60-foot times also improved thanks to the better tires and the alignment made the car both safer and quicker. While we were a little disappointed to not yet run a 9, at least we now have a little time to enjoy the low 10s.

We have about three weeks before our next trip to the strip. Our gameplan is to address the performance from multiple angles. Gearing, power production and suspension tuning will all be addressed. In the gearing department, we plan to order a set of 265/40R18 BFGoodrich Tire Drag Radials. These tires are about 3-percent taller than the 275/35R18s that we are currently using. These taller tires and a 100-rpm rev limiter increase will allow us to see 142.4mph at the top of 4th gear. This should eliminate the need to shift into 5th on a 9- second pass. As for power production, we believe that a better designed Y-pipe and some additional dyno tuning can help improve power output without increasing boost pressures. We’ll be sourcing the pieces from Burns Stainless to make this a reality. With the exhaust system improvement, we’ll be shooting for 800-to-850 whp. Wish us luck and stay tuned.
On August 21, 2015