THE TRANSITION FROM SUMMER TO FALL INDICATES the end of the events season, when project cars return to the garage to be reworked over the winter. But before the season ended, the grandest of events took place, the IDRC International Finals. After traveling across the country to Bandimere Speedway for the IDRC Street Tuner Mayhem event and to Norwalk, Ohio for The Shootout presented by Buschur Racing, the IDRC closed out its race season on October 25 with the BorgWarner/IDRC International Finals presented by AEM Induction and the INSTAFAME Car Show at the Auto Club Dragway in Fontana, California.

The IDRC celebrated its 18th International Finals with more than 3,000 in attendance. The front gate at the dragway was already well over 100 cars deep by 7am, seemingly with no end in sight for the end of the line. As the vendors, racers and the show cars filtered into their respective pits, the venue came to life. Racers scrambled to unload their cars in preparation for the track to go hot, while the car show crews set up their canopies, lawn chairs and barbecues in the show area. 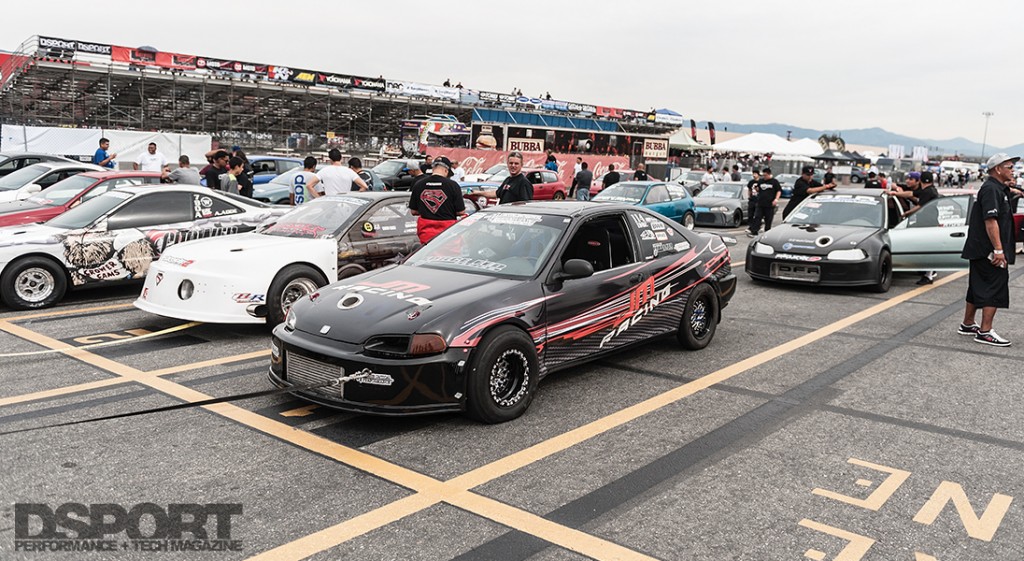 The 2015 INSTAFAME Car Show season has set an unprecedented new standard for the show car scene and community. The INSTAFAME season opener at the IDRC West Coast Nationals brought over 300 cars to Fontana. For this event, the crews stepped up their game, increasing that number to over 360 cars from a total of 17 crews. Many familiar teams represented once again, alongside a handful of teams making their first appearance in the INSTAFAME Car Show. A broad range of imports was on display and even a few domestics, too. 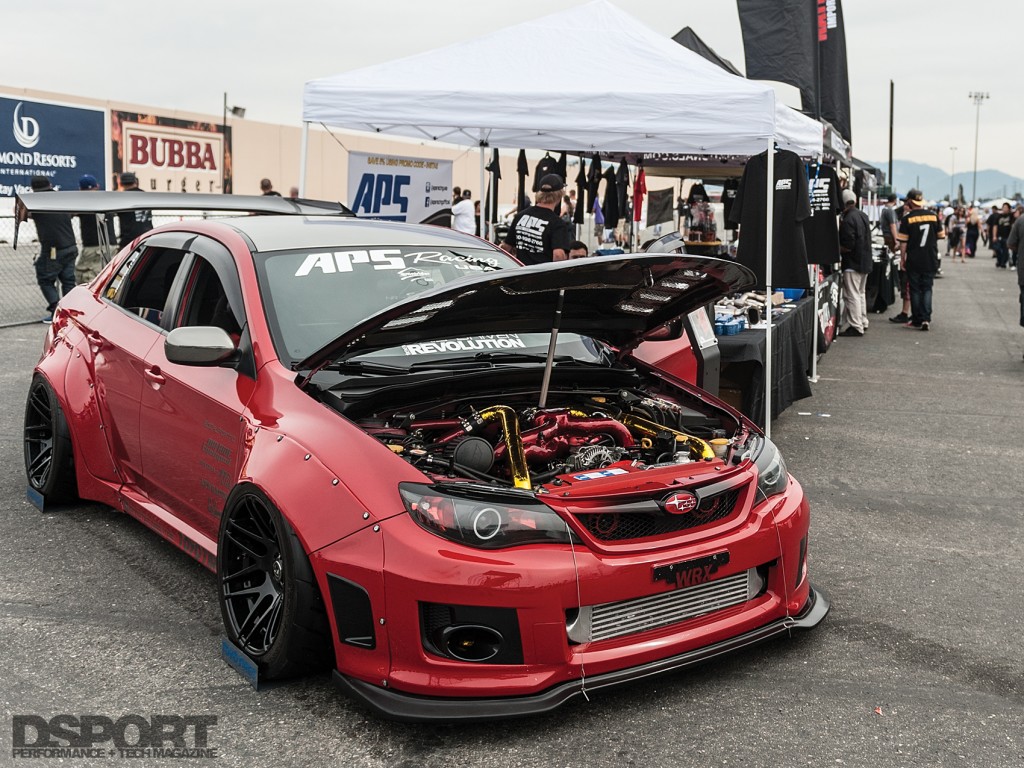 Ladies in the Lounge

An automotive lifestyle event like this wouldn’t seem complete without models. Promoter and enforcer, Abe “Kuya” Ubaldo, set up the Kuya Model Lounge under the big tent in the center of the vendor row. A total of 14 models were in attendance, including Morgan Andrea, Monika Cozlin, Tina D., Lilly Evans, Priscilla Gomez, Milanie Hirschmann, Jasmine Kay, Khloe Lee, Lauren Mac, Jennifer May, Veronica Raudales, Julie Real, Seiravxoxo and Valentinova. The models signed autographs and took photos with their fans throughout the day. Some even walked the show and took photos with some of the cars on display. Then it was time for a squad of the ladies to walk the car show and meet all of the crews to determine which team would be crowned INSTAFAME’s Best Crew.

The Best and the Biggest 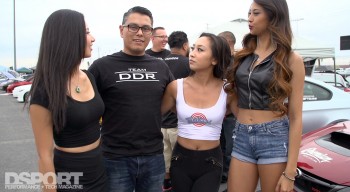 As the models walked the show, they met with each of the 17 crews. Each of the crews did their best to impress the ladies, as they would decide which crew they liked the most. At the season opener, Team Blacklisted won the model’s vote. At the Finals, Team Daily Driven Revolution (DDR) earned their favor, winning the title of Best Crew and a photo spread in DSPORT Magazine. Team DDR was founded in 2010 by its president, David Pacheco. On top of attending numerous shows and helping each other with their builds, this automotive family gets together twice a month just to hang out. Team DDR also earned several individual awards. Pacheco’s Octane Blue EVO X earned honors for Best Engine as well as the coveted DSPORT Editor’s Choice award.

The honors for the Biggest Crew went to 9GensoSiety. This organization, composed exclusively of ninth-generation Honda Civic SIs, preregistered a total of 63 cars to also win a spread in DSPORT. They brought ninth-generation Civics from across the nation. The member who made the longest journey with his ride was Choi Durante. He shipped his 2014 Civic SI coupe from his home state of New Jersey a week prior to the event and then flew to California to attend the show. In addition to being a part of the biggest crew at Fontana, Durante left California a winner, earning the top honors in the Ninth Gen Civic class. He also won the crowd’s favor, taking home another coveted trophy, the People’s Choice award. 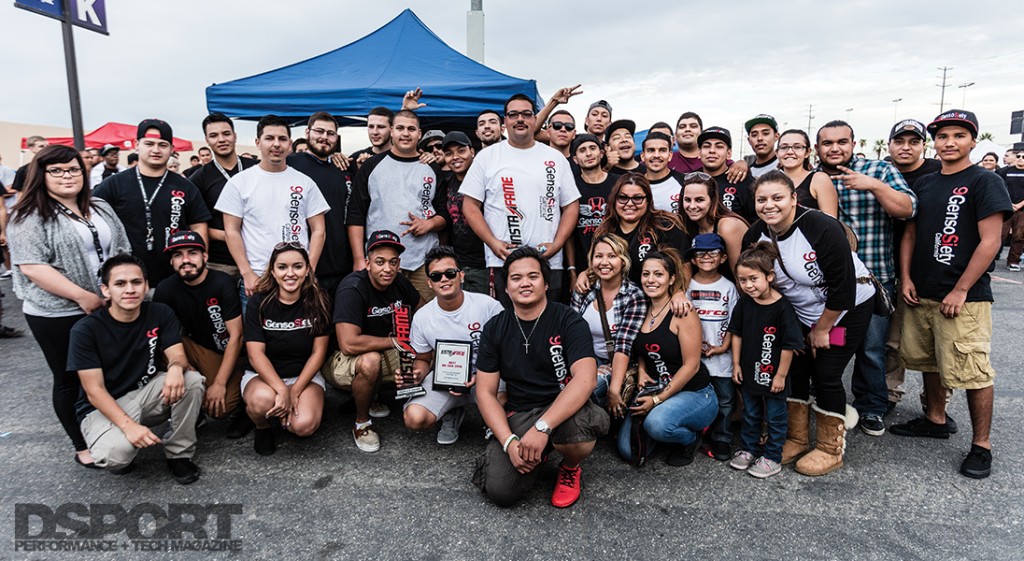 The competitors in the three Heads-Up classes knocked down single digit e.t.s throughout the day. Jerry Guzman delivered the lowest e.t. in the All Motor class with a 9.964-second pass. He battled through the elimination rounds to meet Leo G in a close and exciting final round. Guzman narrowly defeated Leo G with nearly identical reaction times and only a 0.039-second margin of victory. 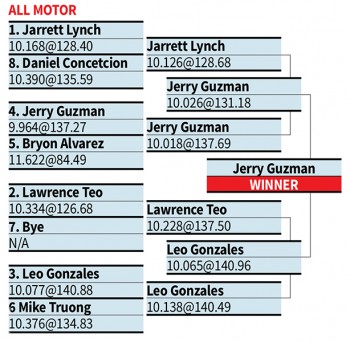 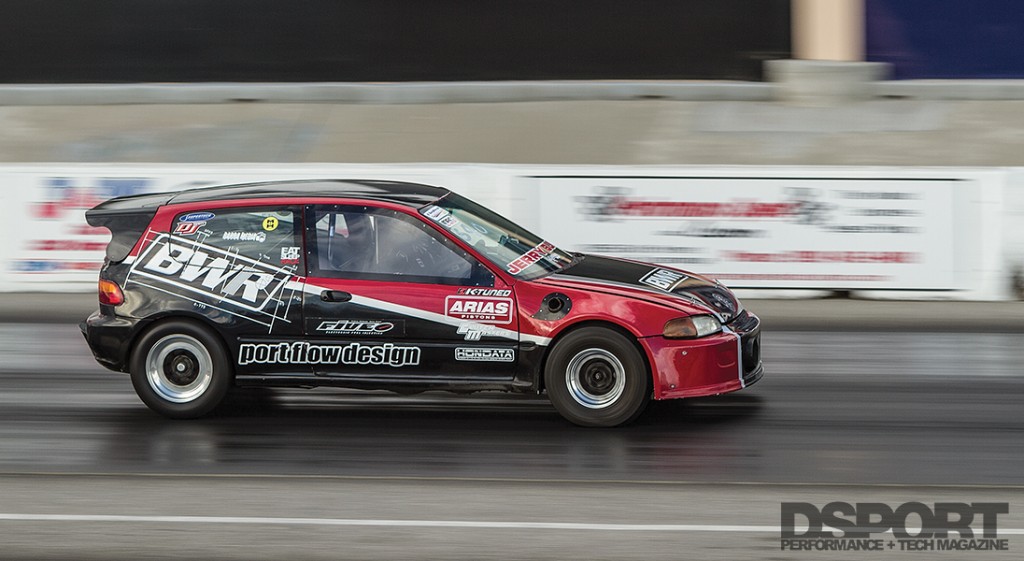 In the Full Race Motorsports Pro Turbo 10.5 class, Jason Ames recorded the quickest time of 8.960 seconds, while the top qualifier in the class, Justin Verches, reported the fastest top speed of 168.03 mph. Jeff Chang was on pace to run an eight-second pass in his Subaru STI. Unfortunately, his car suffered from a faulty alternator that he was unable to identify in time to replace. His engine shut down when his battery drained at the line in the first round of eliminations, sending his opponent, Ames, into the finals. Ames went on to defeat Verches in the finals, running an 8.960-second pass at 162 mph for the win. 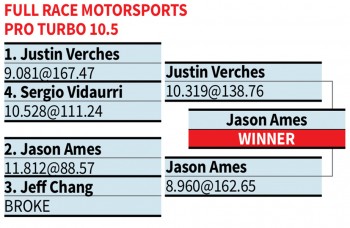 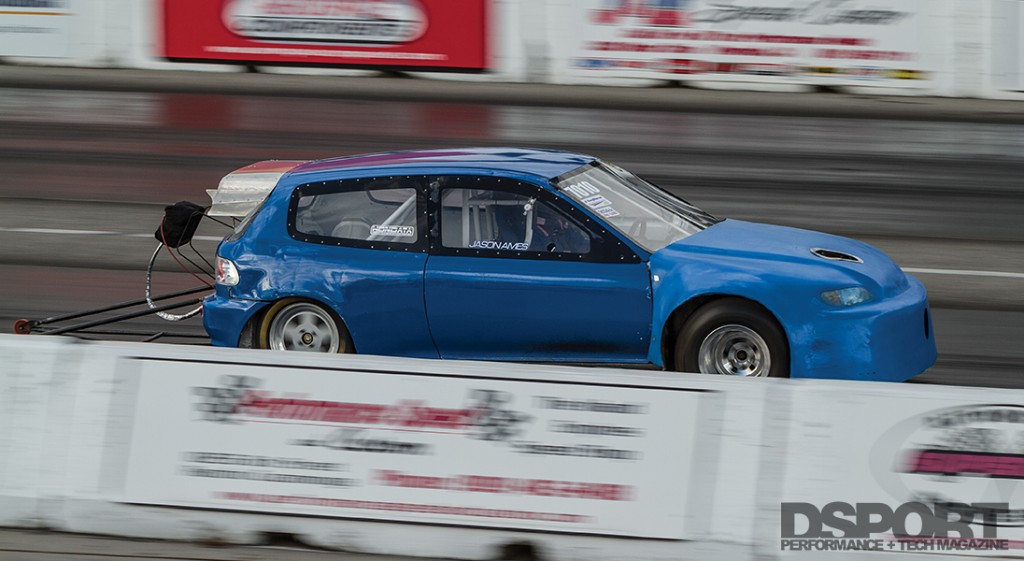 The quickest and fastest competitor of the day was Shannon Stanciel in the Turbo by Garrett PRO-FWD class. Stanciel was not only top qualifier with an 8.899-second pass at 178.05 mph, he backed it up with an even quicker pass of 8.863 seconds, his new personal best time slips. Unfortunately, he was sidelined by a broken slave cylinder just before the finals against Behzad Agahzadeh, who had been running consistent nine-second passes throughout the day. Agahzahdeh went on to claim the victory in the PRO-FWD class. 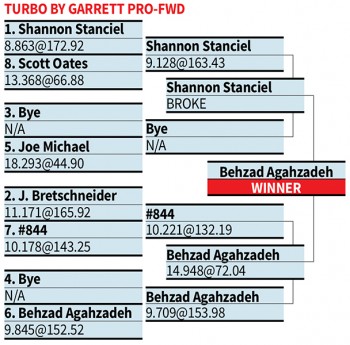 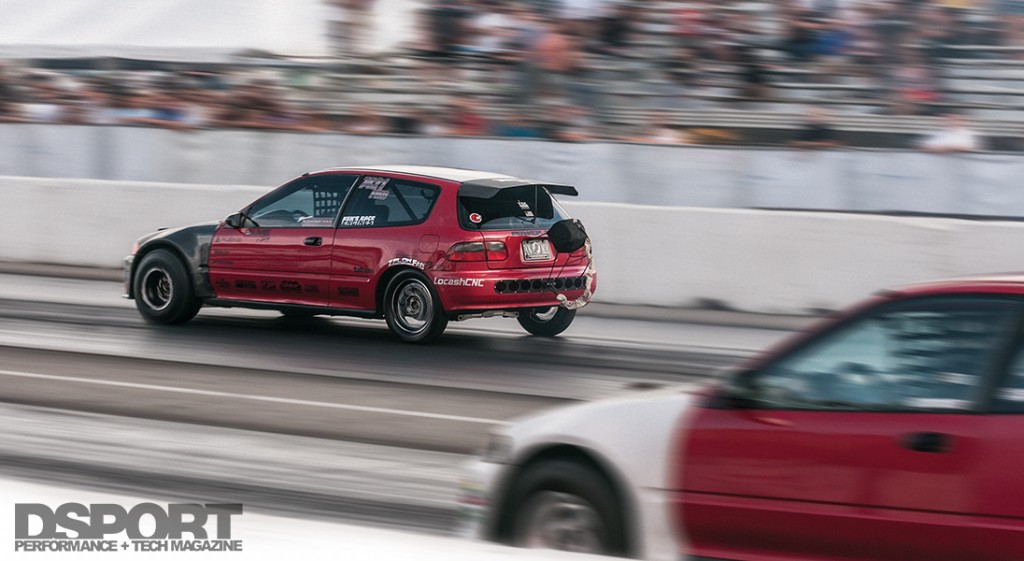 Indexes in the Mix

The four index classes gained momentum with the competitors that fell between the heads up classes and the brackets. The quickest of these classes, the Motovicity Distribution Competition Eliminator 10.0 class, featured a mixed bag of vehicle types, including an EVO, Eclipse, Integra and some Civics. The top qualifier of this group, limited to a 10-second elapsed time, was Saeb Abunejo. He battled through the class to meet Manuel Castanon and his EVO VIII in the finals. Castanon beat Abunejo to the traps with a 10.827-second pass at 133 mph to seize the Competition Eliminator victory. 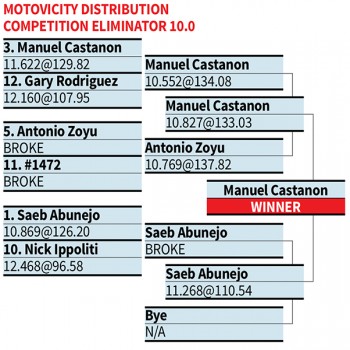 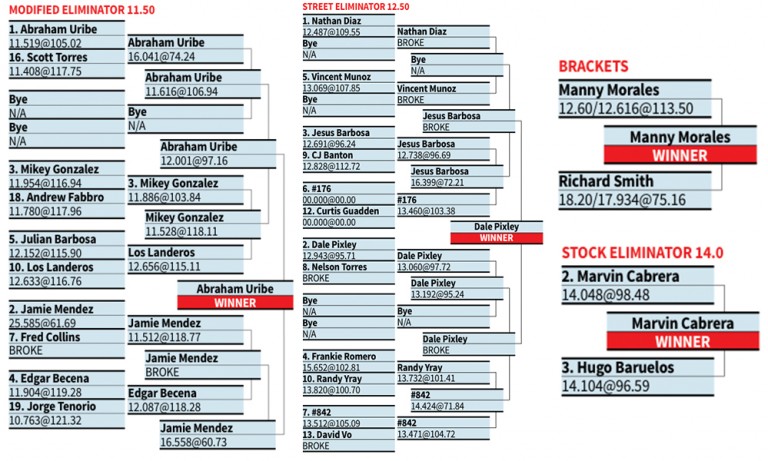 Racing into the Sunset

While no one expects a race to go without breakdowns, several heavy oil downs silenced the track and halted the racing action. While the track staff did an excellent job cleaning up the spills quickly while restoring a safe racing surface for competition, the delays had racers scrambling back to the staging lanes toward the end of the day in an effort to get through the eliminations before sunset. As the last light of day crested the horizon, the last racer broke the beams and the race was officially over.

The IDRC International Finals and INSTAFAME Car Show closed out the 2015 season in grand fashion. The attendance, the racing action and the incredible car show turnout throughout the year have set the stage for the 2016 IDRC and INSTAFAME Car Show season, which kicks off on April 10, 2016 at the IDRC West Coast Nationals at Auto Club Dragway. Stay tuned. 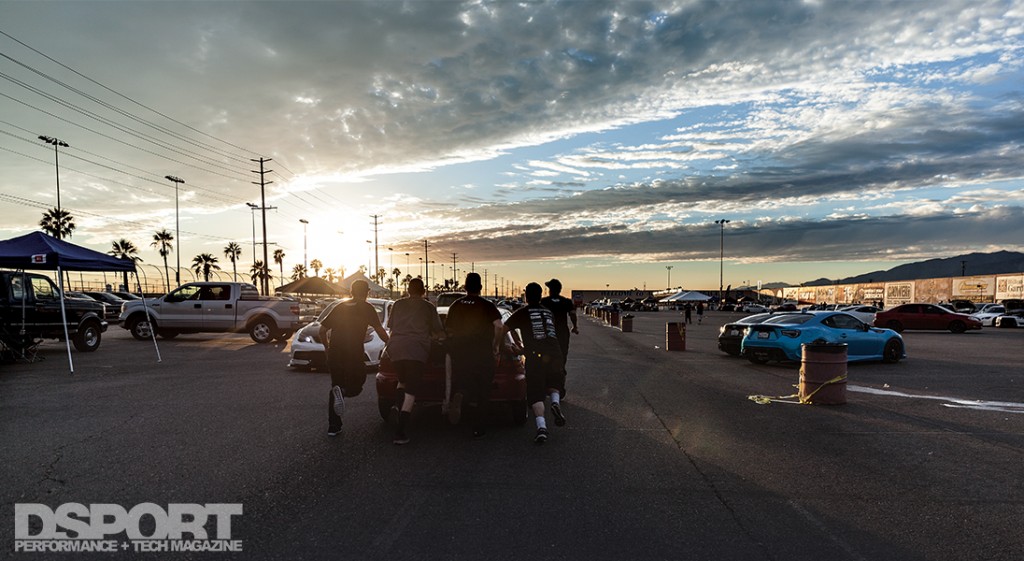 The Best Crew award at the INSTAFAME Car Show went to Team Daily Driven Revolution. They made the best impression on the models that walked the show and interviewed the crews. What struck the ladies the most was that the crew spoke more about their team and their mission as opposed to just talking about their cars. Their sincerity was genuine and that earned them the honor. 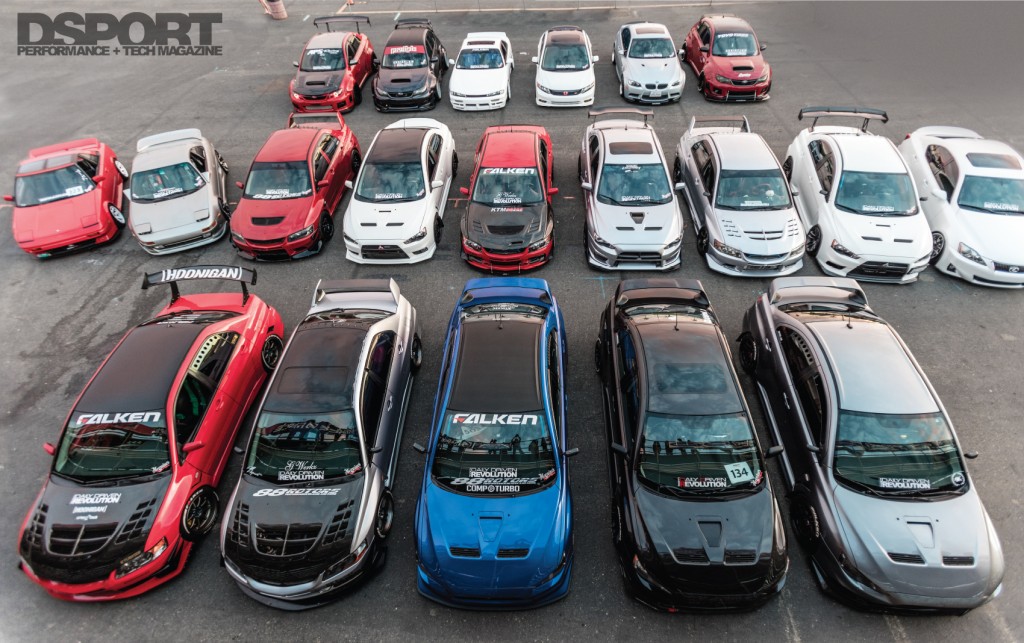 9GensoSiety was the Biggest Crew to represent in the INSTAFAME Car Show at the IDRC International Finals. Based out of Old Bridge, New Jersey, this crew is composed primarily of ninth generation Civics (FB/FG) with chapters scattered all over the United States. Currently, there are 20 chapters in states such as New Jersey, New York, Pennsylvania, Texas, California, Massachusetts, Maryland, Connecticut, North Carolina, Kentucky, Arizona, Florida, Ohio, Virginia, West Virginia, Hawaii, and Tennessee. Choi Durante, brought his 2014 Civic SI all the way from New Jersey to show support for the crew and of the INSTAFAME Car Show. Durante won first place in the 9th Gen Civic class, along with the fan-driven People’s Choice Award. One member of 9GensoSiety, Jorge Morales, put it very simply, “Our crew consists purely of ninth generation Civics. We strive to be the most helpful and friendliest crew out there. We’re happy to see enthusiasts that have a passion to build their ride and we help the crew turn dreams into reality.” 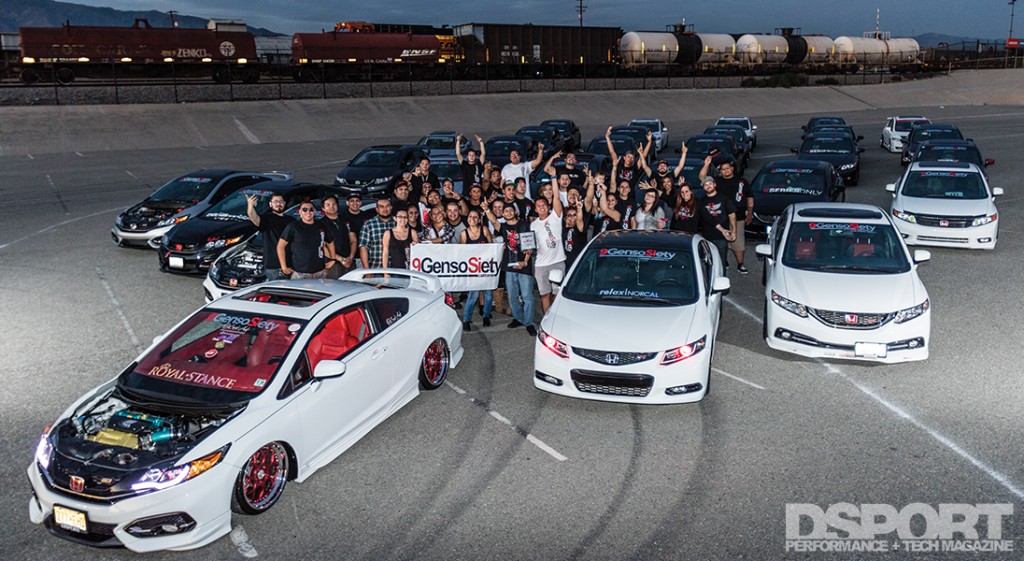