The R35 GT-R is Nissan’s most capable and impressive vehicle to date. Nissan teamed an exceptional engine with a capable dual-clutch transaxle and tied everything together with arguably the world’s best AWD torque management system. While Nissan never designed the vehicle to be a record-setting drag and top-speed machine, owners, tuners and performance parts manufactures have pushed R35s to have few rivals at the strip or runway. While a record-setting R35 may seem like the ultimate ride, concessions are often made to reach those levels of performance. If you do not want to give anything up and improve the performance and reliability of the R35 GT-R there are combinations that can get you there. With Club DSPORT Reference Series VR38DETT engines in place, we dyno tested two different R35s to see just how far the Xona Rotor Green R35 V2 turbos can take you. 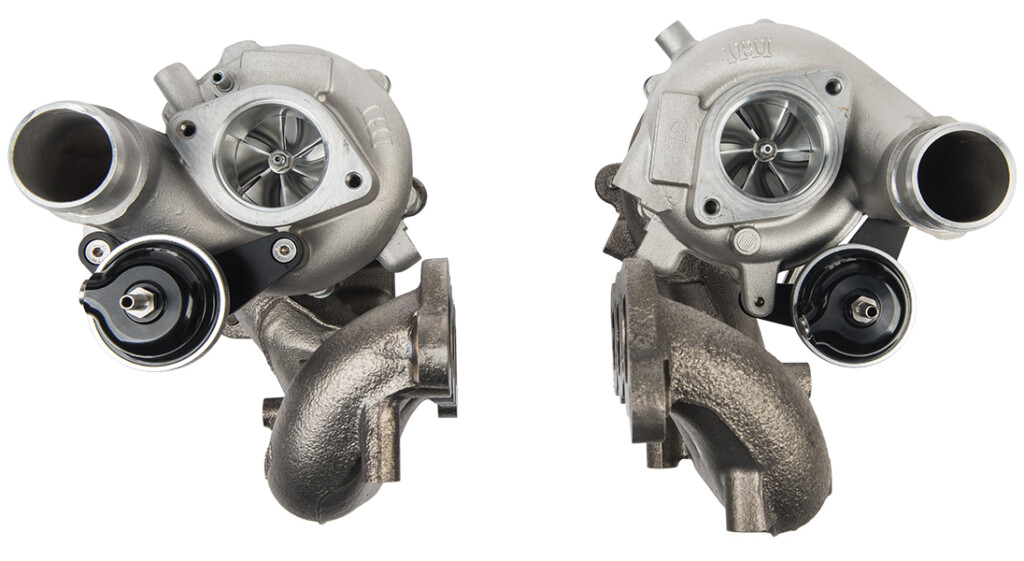 Recently, we had two different R35 builds competing in classes requiring stock-appearing turbochargers. The new Xona Rotor Green R35 V2 turbos met that requirement for stock-appearing as they are built from the OEM turbocharger-manifold combination (aka turbofold). In fact, these turbos require sending in the original turbofolds to get upgraded to the Xona Rotor Green spec. During this process, the exhaust manifold is cleaned and blasted and checked for cracks. Quite often, small cracks develop near the wastegate flapper area. Any cracks are repaired before the turbine section of the manifold is machined for the larger turbine wheel used in the Xona Rotor Green R35 V2 turbos. In regard to the turbine wheel, this is where the improvement is realized in the V2 over the original Green R35 turbos. The new V2 edition uses a larger 51mm turbine wheel featuring Xona Rotor’s UHF (Ultra High Flow) technology. This technology allows the mass to be reduced due to the unique splitter wheel design. This provides the benefit of a higher flowing turbine wheel without the weight and inertia penalty. The original IHI center section is maintained, so the water cooling inlet and outlet and oil feed and drain all use the OEM connections. The OEM compressor housing is machined to accept the larger Xona Rotor billet compressor wheel. Whereas the Nismo compressor wheel is sized to be able to deliver about 15-percent more airflow than the standard R35 wheel, the Xona Rotor Green compressor wheel is able to flow about 30-percent more air than the standard R35 compressor wheel. TiAL-MVI wastegate actuators come standard with the Xona Green R35 turbochargers to optimize boost control. 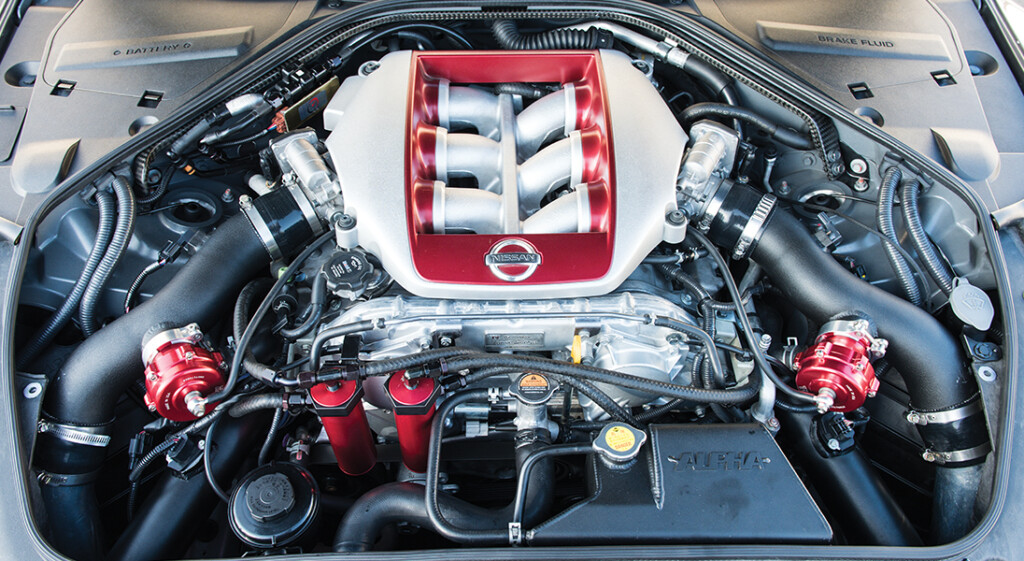 FBO and the 600ft-lbs Plateau

What is FBO? FBO is the abbreviation for Full-Bolt-Ons, referring to the level of upgraded parts on the vehicle. While the term is used frequently, not everyone’s interpretation of FBO is the same. DSPORT’s interpretation of FBO would include cat-back exhaust, downpipes, fuel pump upgrades, injector upgrades, intercooler upgrades and a tuning solution (COBB, ECUTEK, MoTeC, etc…). Even though an argument could be made that the XONA Rotor Green turbocharger and some others offer a complete bolt-on solution, the performance level attainable with an upgraded bolt-on turbo puts it in a different category. Let’s call the category FBO+.

With the R35 GT-R, a well-engineered FBO solution, especially when teamed with E85, can produce enough torque to expose the weakest link in the VR38DETT engine. When pushed too hard, too many times, the factory connecting rods will give way. The result is catastrophic engine damage. These failures occur when the calibration and driver visit the land beyond 600 lb-ft of torque too many times. The failures do not instantaneously happen when the engine produces 600 lb-ft of torque. Instead, it is more like a paper clip being bent back and forth. The higher the torque level beyond 600 lb-ft, the further the paper clip is bent. The more seconds you spend above 600 lb-ft of torque, the more times the paper clip is being bent back and forth. In addition to connecting rods lifespan reduction, torque levels above 650 lb-ft tend to reduce the clutch life as this is beyond the holding capacity of the OEM clutches. 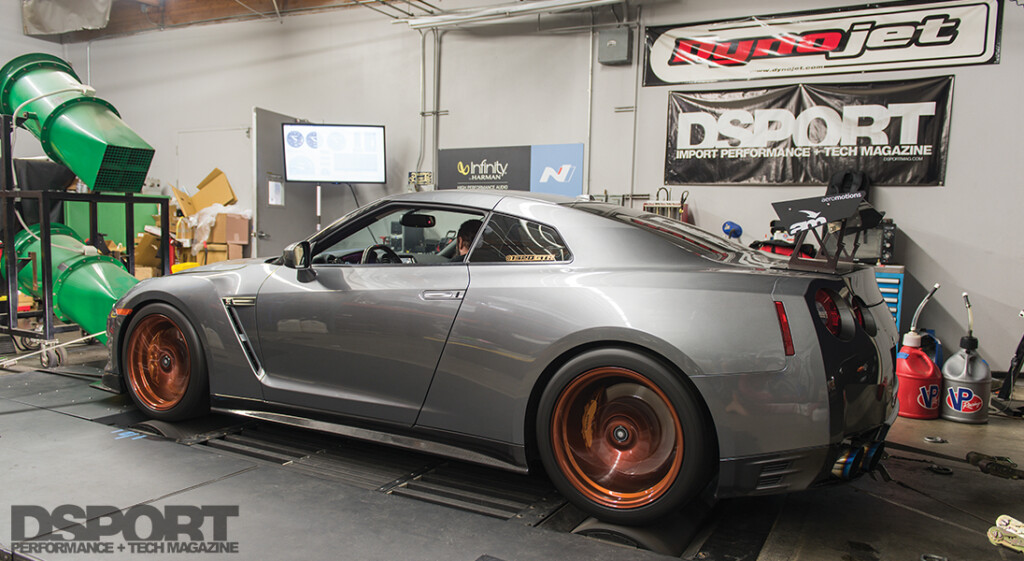 An obvious question is can you run a bolt-on turbo upgrade like the XR Green V2 on a stock R35 engine? It really depends on your performance goals. If you want to get the most out of the stock engine, the XR Green V2 turbocharger will let you maximize the power. However, if you want to get the most out of the XR Green V2, you will want an engine with at least upgraded connecting rods as it is possible to produce more than 750 lb-ft of torque at elevated boost levels with the XR Green turbos (running E85). The cylinder pressures associated with those torque levels will make scrap of the factory connecting rods and the rest of the engine in short order. However, if your goal is to be able to hold torque at the 600 lb-ft level far beyond the engine speeds that the OEM turbo will let you, it can be done with proper boost management. With the OEM turbo, holding boost above 20psi is impossible at engine speeds above 4,500RPM. The compressor of the standard OEM turbo is simply out of flow at that time. However, the XR Green GT-R turbos have enough flow to produce 25psi of boost pressure to redline. That is more than enough flow to produce 600 lb-ft of torque at 7,000RPM which translates into 800whp. However, if the calibration isn’t perfect in the tune and the engine produces too much torque for too long (which is easy to do with larger turbos), you will be cleaning up a mess and spending $25K to get a new engine in place. 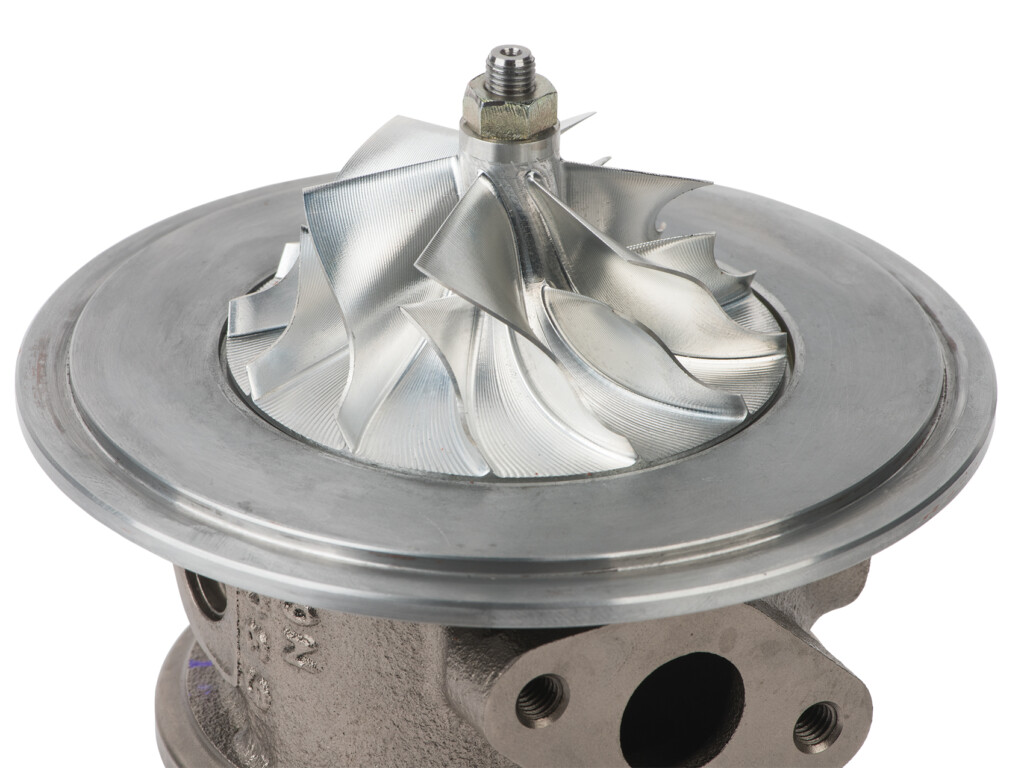 This is a look at the billet aluminum compressor wheel found on the XR Green V2 GT-R turbos. It’s a split-6-blade design with a 49mm inducer. The OEM inducer size is 43.3mm on the standard turbo and 46.5mm on the Nismo turbos. 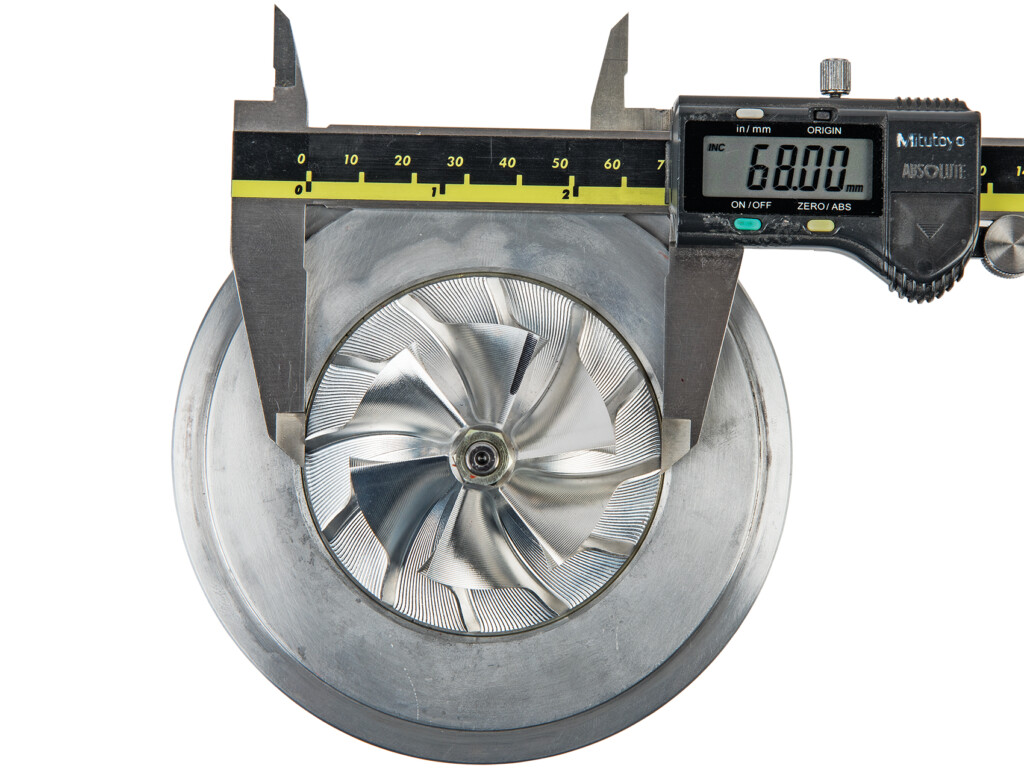 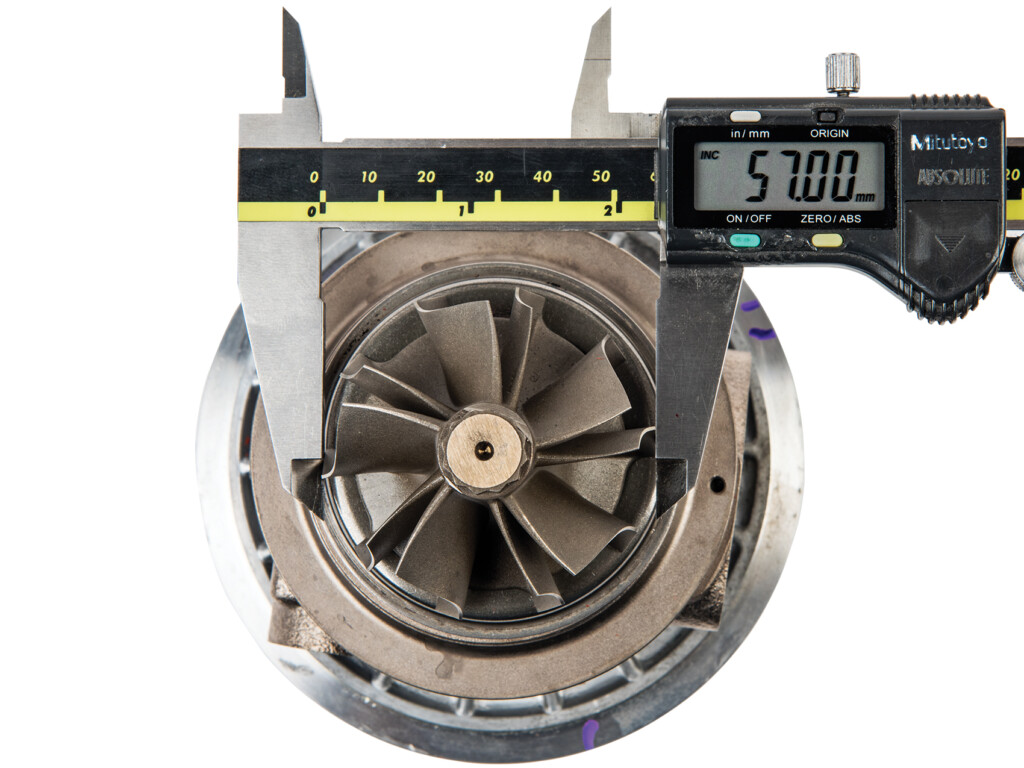 So here’s the magic behind the new XR Green V2 GT-R turbo: it’s the UHF or Ultra High Flow turbine wheel. This is the change made between the original XR Green and the V2 edition. From this top view the turbine wheel has the look of a 6-blade split design like a compressor wheel instead of a typical equal-spaced 9 or 11 blade turbine. 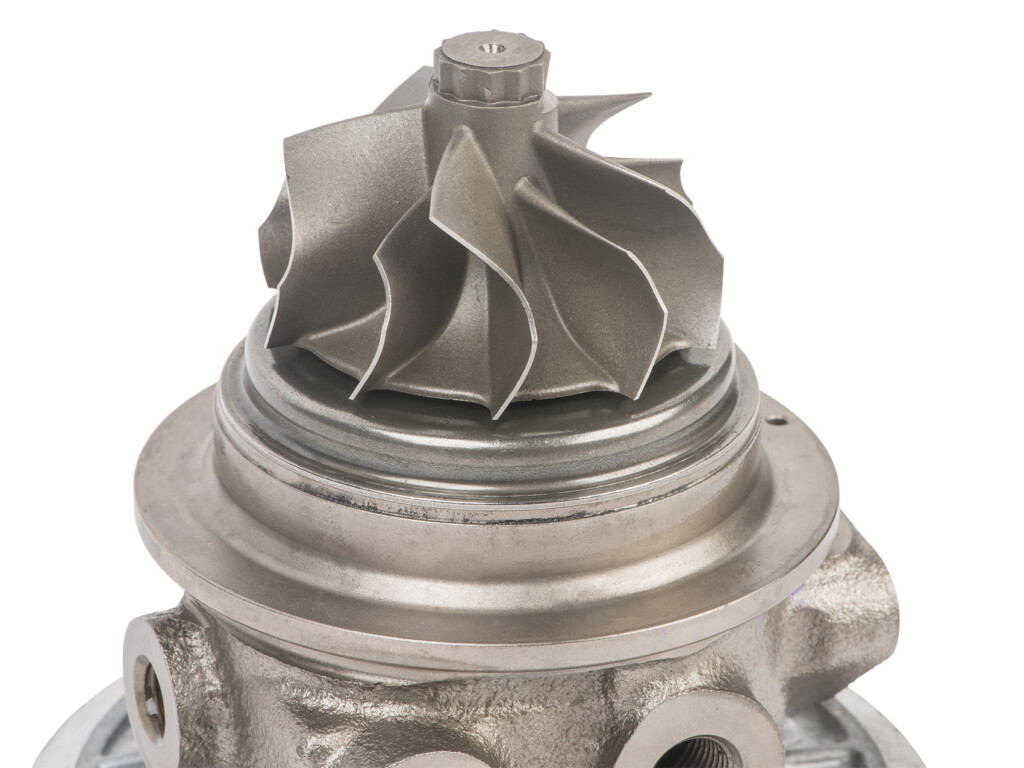 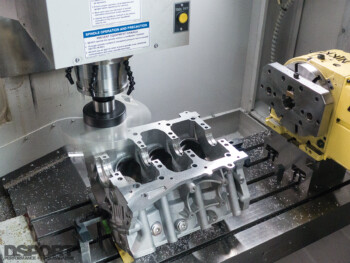 We engineered and developed what we consider is the best VR38DETT short block assembly for GT-R builds producing 700-to-1,600whp. With the Reference Series VR38, Club DSPORT has had zero failures in the four years that it has been available. A Club DSPORT Reference Series short block starts as a new OEM block like most of the other “built” VR38 short block assemblies available. However, instead of just stuffing the new engine block with upgraded parts, the Club DSPORT Reference Series VR38 is machined to higher tolerances than what is possible from an OEM manufacturer. Following a machining operation of the main ladder surface, a set of ARP main studs are installed. The block is set in the CNC for a vertical line boring operation. This ensures alignment and sizing of all four main housings on the block. The cylinder block is then placed on the 4-axis CNC engine machining fixture to have the deck height on both banks of the V6 engine to within 0.0002” of each other. This process also leaves a much smoother finish on the deck surface for a superior head gasket seal. Once removed from the 4-axis CNC, the block is then set up with torque plates to simulate the bore distortion that will occur when the cylinder heads are bolted to the block. A special process is then used to hone the plasma-sprayed liners to a 95.55mm (+0.05mm) bore size. The process requires special abrasives and a special process to get the bores round and taper free by just removing as much as 0.001” of material from the walls. Once the machine work is completed on the engine, it goes through several stages of cleaning before assembly. 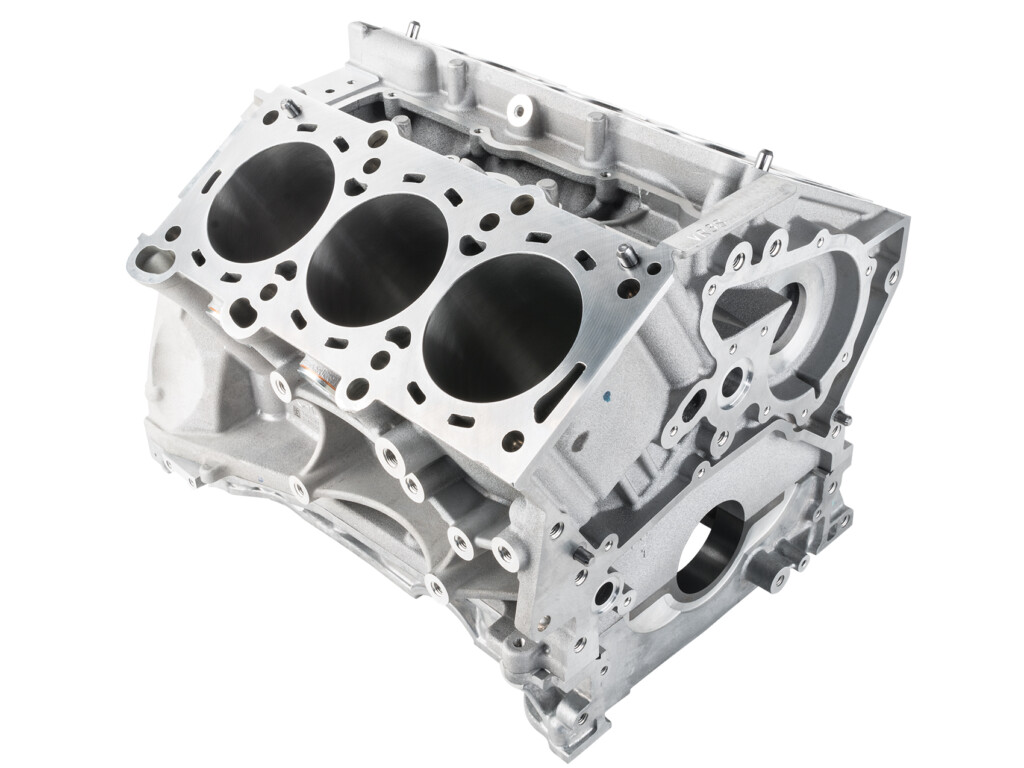 The crankshaft used in the Reference series is an OEM unit that has modified counterweights and a WPC surface treatment of the journal surfaces. Hyperfinishing is also available. The crankshaft is mated to Carrillo H-beam connecting rods with CARR multiphase bolts while Club DSPORT pistons manufactured by Mahle incorporate all of the newest technologies into the piston and ring package. The top ring groove is anodized to resist microwelding, the pin location is offset and tool steel rings feature a hard coating for reduced wear and fast break-in. 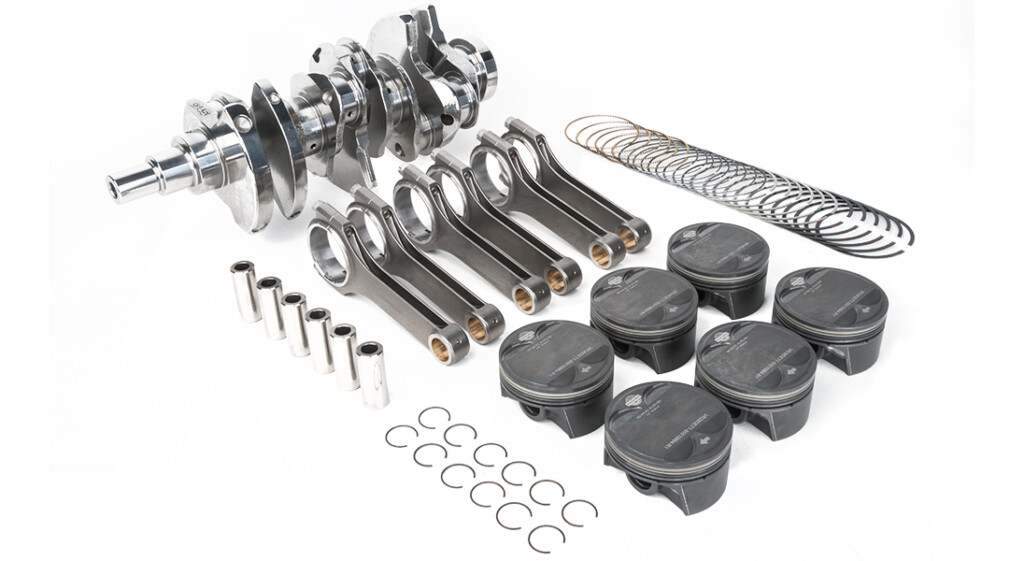 A Tale of Two Tunes

For the tuning, the vehicle with the upgraded transmission had no set torque limits while the other GT-R has its boost manipulated to keep peak torque output below 625 lb-ft. When looking at the dyno graphs for both vehicles you will notice that the peak power is very close to each other. However, the camshaft upgrade and not having the torque limits to save the stock transmission on the one GT-R allowed it to have significantly more power under the curve. This will translate into quicker acceleration, faster lap times and low elapsed times for the trap speed realized. 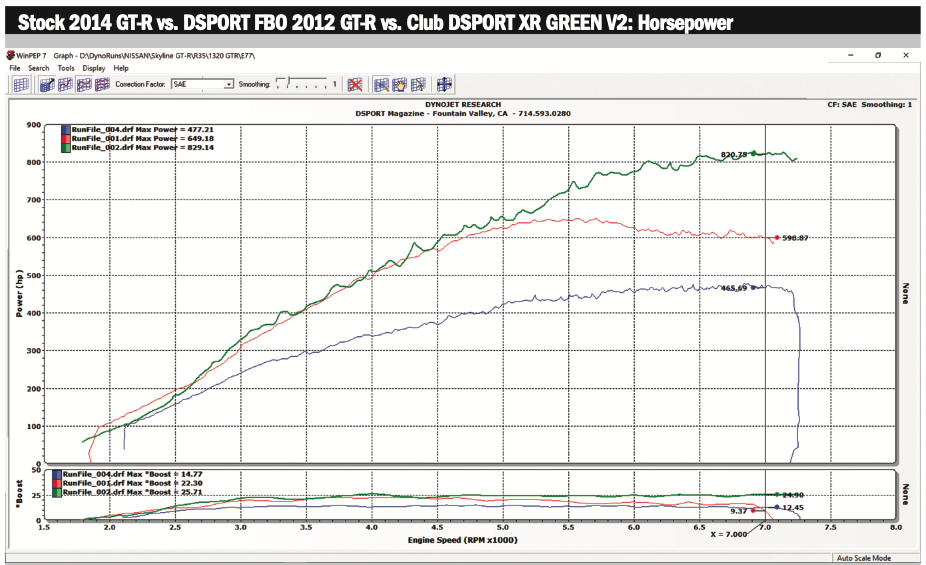 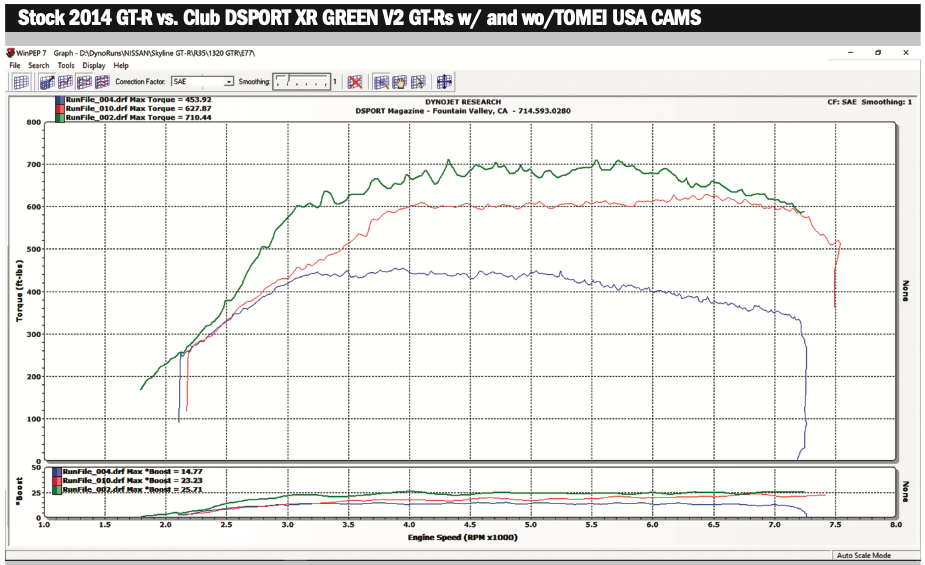 The blue lines represent a stock 2014 GT-R for reference of its torque output. Both the redline and the green line are from Club DSPORT VR38s with XR Green V2 GT-R turbos. The green line has TOMEI USA 258/266 PONCAMS and a built transmission so there were no torque limits in the tune. The red line has a factory transmission with factory clutches so the tune was limited to stay as close to 600 lb-ft of torque as possible. Notice how much better the boost and torque come on with the TOMEI USA upgraded camshafts in place.

Billet blocks, dry-sump oiling systems, giant turbos and 12-injector methanol setups are components found in many of the 6-second drag racing R35 GT-Rs. While these cars are a blast to watch they are not a blast to own. If you are looking to build an R35 GT-R that is fun to own, turbo selection is going to be key. If you looking for an option that lets you develop 800+whp without compromising boost response, the Xona Rotor Green R35 V2 turbochargers deserve consideration. The powerband will not only be adequate for 9-second quarter mile times, it will also be broad enough to use on a circuit course. With a retail price of $3,499 (exchange), this turbo upgrade delivers an impressive amount of horsepower per dollar.