Smooth versus lumpy idle. Instant off idle response or lazy low end. Asthmatic high-RPM performance or a screamer to redline. When it comes to the personality traits of an engine, the control of the valve events is the primary influence of the engine’s behavior. For about the first 100 years of modern internal combustion engines, the absence of variable valve lift and variable valve timing technology meant an engine’s personality was solely determined by the profile of the camshafts. As a result, engine personalities were single minded.

Muscle-car engines provided strong performance while delivering high emissions. The first-generation smog-restriced engines improved emissions while severely choking off performance. Today, modern performance engines emit cleaner emissions than ever before while delivering record levels of performance. One key technology allowing for the optimization of performance at every engine speed is variable valve timing controls. The Subaru FA20D (a.k.a. Toyota 4U-GSE) engine found in the Scion FR-S and Subaru BRZ features computer controlled intake and exhaust valve timing. These two technologies work with the profile of the factory camshafts to provide a clean, efficient and capable performer from idle to redline. While tuning of the cam timing is possible with a re-flash or stand-alone engine management solution, there are many factors that are still fixed by the camshafts themselves. The valve lift, valve velocity, valve acceleration and valve jerk are still dictated by the profile of the camshaft. As one might expect, increasing the valve lift and optimizing the valve velocity, acceleration and jerk can lead to additional performance. This was the mission for HKS engineers in designing its new FA20 camshafts. 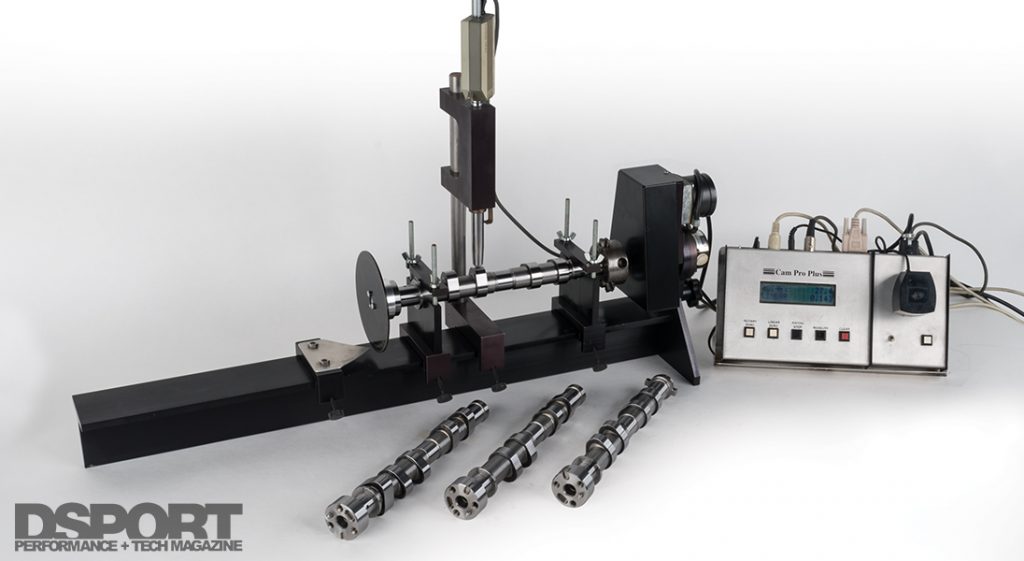 The Cam Pro Plus system uses an adjustable fixture that can accommodate any camshaft. With the help of a computer, the system can measure the lift and position of the cam during a complete revolution.

HKS designed its first FA20 camshafts (22002-AT005) to be compatible with the OEM valve springs and the company’s 2.1-liter Capacity Upgrade Kit (which features pistons with deeper valve reliefs to accommodate the additional lift). If the HKS 2.1-liter Capacity Upgrade Kit is not being used, properly designed aftermarket pistons featuring at least 1mm of additional valve pocket depth should also provide adequate valve-to-piston clearance. Can it be used with OEM pistons? Maybe, if the electronic cam timing control is used to keep the piston to valve clearance acceptable, it will work. Then again, who is going to bother pulling out the engine to install camshafts without building the shortblock? 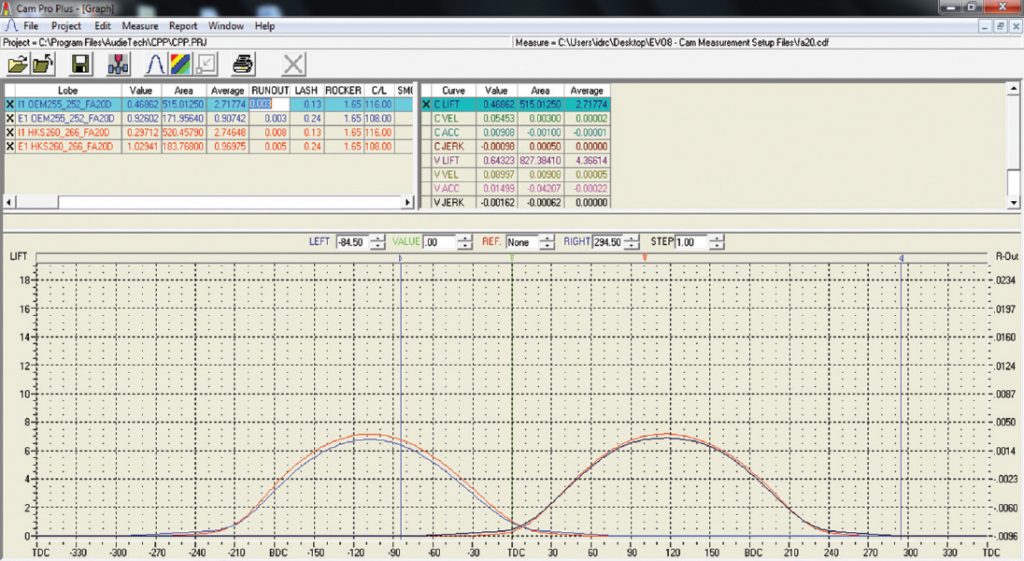 The red lines represent the HKS 260/266 cams versus the OEM cams in blue. Notice that overall duration is nearly the same. The main difference is higher lift. This makes for well-behaved profiles.

HKS describes its camshafts as a 260/266 combination with a peak valve lift of 11.70mm. This specifies an advertised duration of 260 degrees for the intake cam and 266 degrees for the exhaust cam with a peak lift of 11.70mm. For comparison, HKS classifies the OEM camshafts as being 255/252 duration with a peak lift of 11.00mm. HKS’ in-house dyno testing of the 22002-AT005 camshafts in a 2.1-liter, HKS GT supercharged FA20 showed an increase of 11.8 horsepower at 6,950 RPM over the factory camshafts. This represents a 4.3-percent increase in peak power while showing an improvement in power from 2,000 RPM to redline. Peak torque also increased by 3.9 percent. 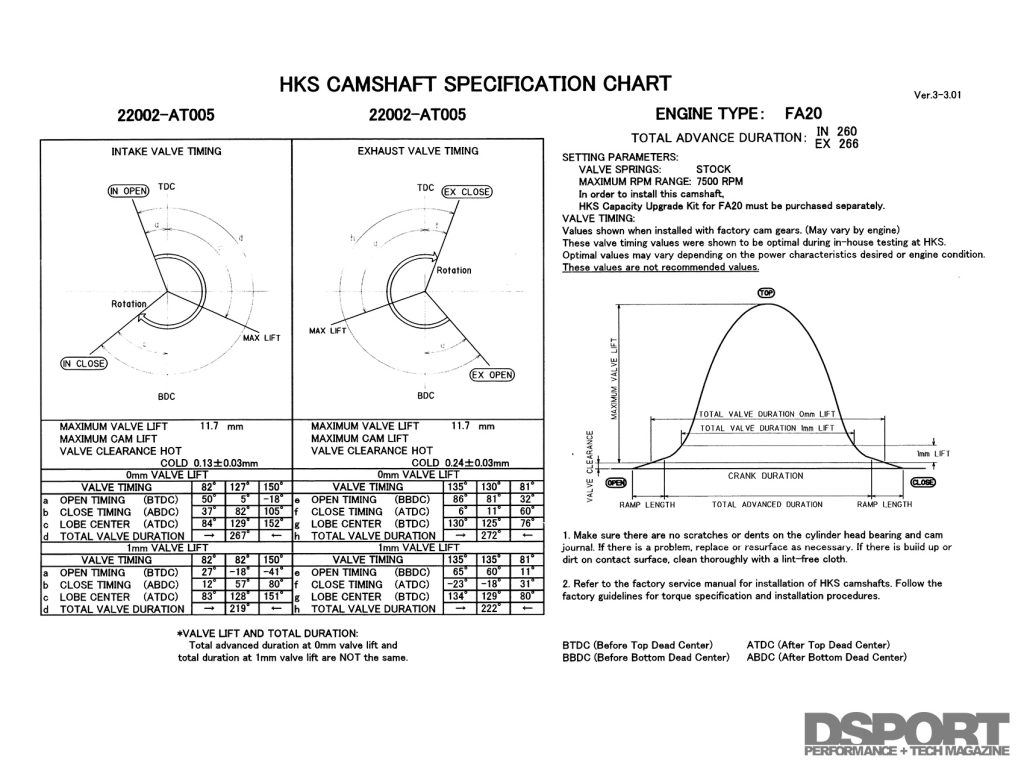 HKS supplies a “cam card” that gives the data needed to properly degree the camshaft in the engine.

While we would have loved to build a 2.1-liter FA20 engine with forced induction to replicate the test, we didn’t have an extra $15,000 in our budget to pay for the parts and labor. Fortunately, we were able to do more than just repeat the claims and data provided by HKS. We tested both the OEM and the HKS cams on our Cam Pro Analyzer. This machine and its software measures the camshaft lobes to determine the exact amount of lift and duration in the profile. In addition, it can accurately predict the ramp characteristics that affect the velocity, acceleration and jerk of the valves (assuming that the valvetrain is behaving). 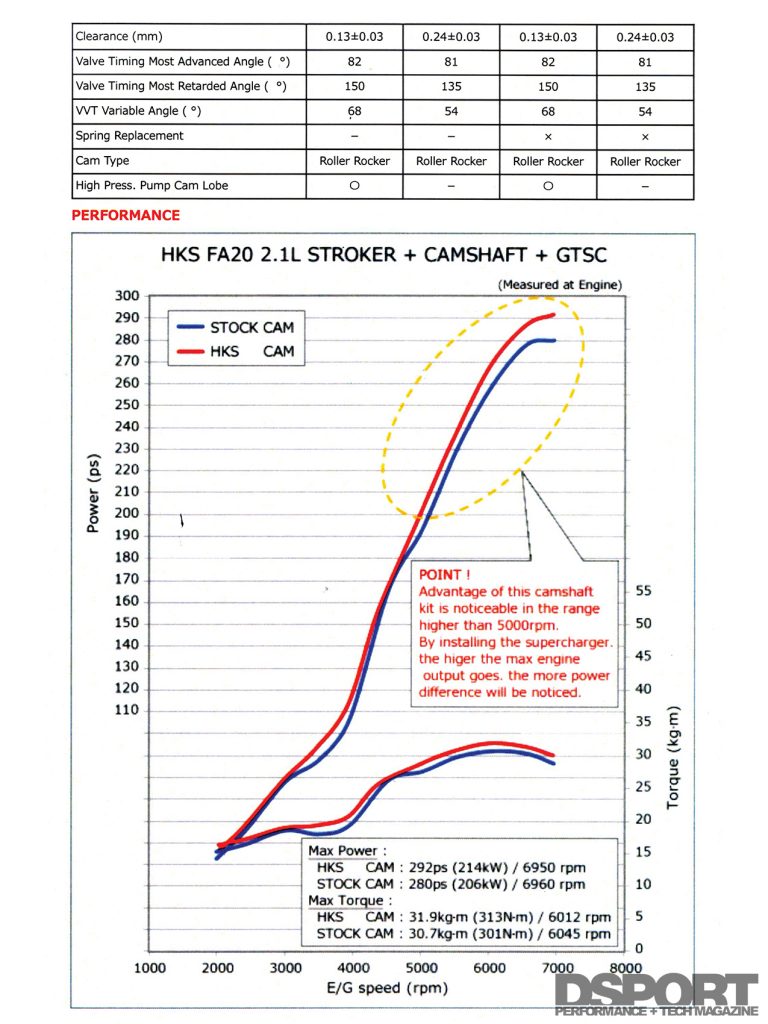 Results of the Check-Up

The HKS 260/266 camshafts focus on increasing the amount of time that the valves are open at the higher valve lifts. While both the OEM and HKS cams have very similar duration at the low-to-upper-mid lift range (0.0-to-9.0mm), the HKS cams deliver a significant boost in open valve duration in the high-lift range (10.0-11.7mm). The OEM cam holds the intake open for 57 degrees of crankshaft rotation with the valve lift at or above 10.5mm. By comparison, the HKS cams hold the intake valves at these lifts for 66 degrees. At 11.0mm of lift, the OEM camshaft has the intake valve open for just 33 degrees, while the HKS cams have the intake valves open for 50 degrees. By focusing the increase in duration at higher valve lifts, the HKS cams limit additional stresses on the factory valvetrain. According to the Cam Pro Analyzer, the total amount of additional area under the valve lift curve with the HKS camshafts is 2.3-percent on the intake side and 7.6-percent additional on the exhaust side. Since the HKS cams affect the exhaust flow more than the intake flow, they are ideally suited for supercharged applications.

For every action, there is always a reaction. From a performance standpoint, the faster a valve opens and reaches full-lift, the better. Why? Horsepower is directly related to how much air and fuel can be stuffed into the cylinder. Air and fuel can’t get into the cylinder unless the valves are open. Camshafts that quickly open the valves are said to have an aggressive lobe profile. Unfortunately, the laws of physics govern the maximum amount of possible valve acceleration or “aggressiveness.” If the camshaft profile tries to accelerate the valve too fast, excessive wear or valvetrain problems can occur. When returning a valve to its seat, a camshaft once again cannot do this too fast or the valve slams into the valve seat (sometimes valves even bounce off the seat). The HKS ramps are designed to limit additional stresses in the valvetrain, so there is no reason to expect an increase in the chance of valvetrain failure. 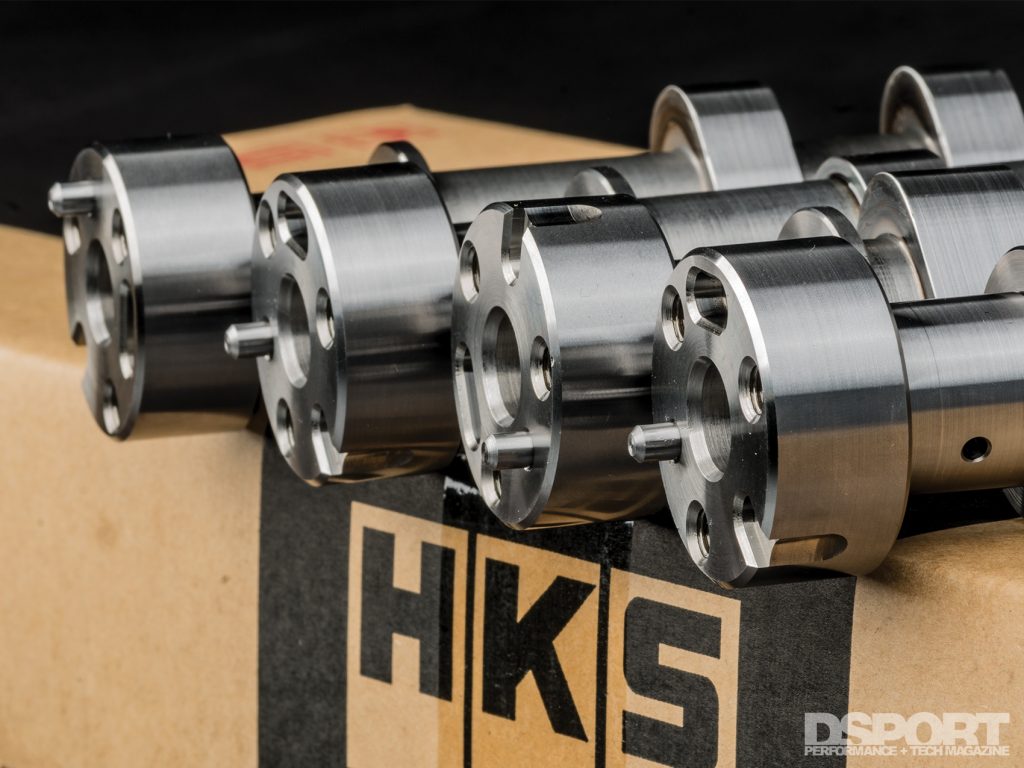 The basic function of a camshaft is to open and close the engine’s valves. On many applications, a single camshaft controls the opening and closing events of all the valves in an engine. Other applications may implement as many as four camshafts to control the valve events. Regardless of the number of cams, the rules that apply for single camshaft engines also apply to those with multiple camshafts. The most well-known camshaft specifications are lift and duration. Most manufacturers give specifications for lift at the valve, instead of at the camshaft. On some applications that don’t use a rocker assembly, these two lifts may be the same. If you need to convert from lift at the camshaft lobe to lift at the valve, use the following equation.

Lift is nothing more than a measurement of the maximum distance the valve is opened. Assuming all other specifications remain the same, choosing a camshaft with more lift will increase the flow of air and fuel into an engine and the flow of exhaust out of an engine. As a result, more power can be made. In many cases, camshafts that have increased lifts over stock specifications and near stock duration will offer increased performance without making measurable sacrifices in “driveability”. Everything has a limit and cylinder heads will generally reach a point where airflow no longer increases with an increase in valve lift. Before you order that mega-lift cam, please consider the following: when valve lift is dramatically increased, the possibility of valve to-piston contact, coil bind at the valve spring and valvetrain interference is also increased. To avoid bent valves, broken retainers and thin wallets, always use the necessary complementary valvetrain components and check valve-to-piston clearance when recommended by the camshaft manufacturer. 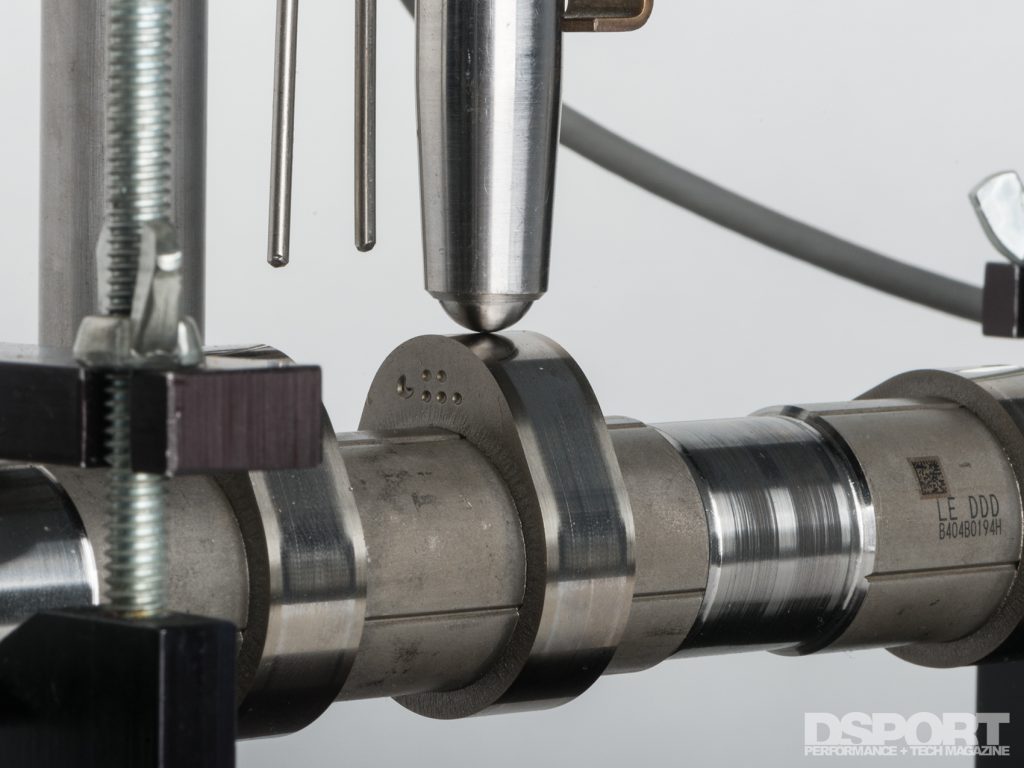 Along with how high a valve is opened, how long it remains open also influences the performance of an engine. If you are trying to fill a glass at the sink, how much you open the faucet or valve, as well as how long you have that valve open will determine how much water fills the glass. How long you keep the faucet turned on is a simple measure of duration. The duration specification of a camshaft is measured in crankshaft degrees of which there are 720 in one complete four-stroke cycle. However, the problem with camshaft duration figures is that different manufacturers measure this duration at different valve lifts. The Brand-A manufacturer might measure duration as soon as the valve is lifted .015 of an inch off its seat until it returns to the same lift, while the Brand-C manufacturer might not start measuring until the valve is .050 inch off the seat. The result is that if we had both companies measure the same camshaft, Company-A might measure 306 degrees of duration (measuring at a minimum lift of .015”), while Company-C would measure 256 degrees of duration (measuring at .050”). In essence we have two completely different numbers for the same camshaft.  Luckily, most camshaft manufacturers now provide duration figures at either a minimum lift of 1mm (Japan’s industry standard measure) or a minimum lift of .050” (the traditional U.S. hot rod standard). When duration comparisons between two camshafts are being made, only compare the figures if the measurements have been taken at the same minimum lift.

More lift translates into more power and torque across the powerband for most cases. In general, increased duration will shift the torque and horsepower peak to a higher RPM. All other specifications being the same, increasing duration yields more top-end and mid-range power while sacrificing low-end torque. As a result of the shifting of the powerband upstairs to higher rpms, a longer duration camshaft, when used with the appropriate valvetrain components, will also raise an engine’s redline. One rule of thumb is that every 10 degree increase in duration (measured at 1mm or .050”) will shift the torque peak and redline up by 500 RPM. 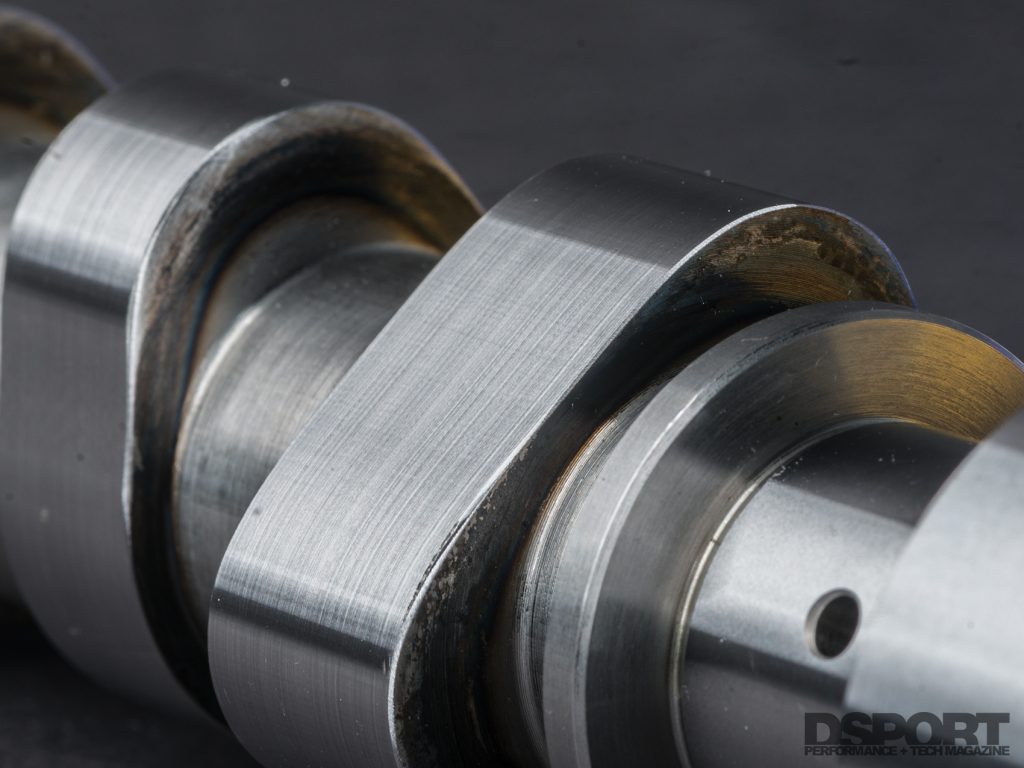 If you are looking for a race-only, 9000 RPM camshaft set requiring titanium valves and valve spring upgrades for a 20-percent power gain, this isn’t it. The HKS 260/266 FA20 camshaft package is designed to maximize performance up to 7,500 RPM without decreasing valvetrain reliability. While this camshaft set is designed for off-road use, we’d expect its design to have a minimal effect on exhaust emissions based on its profile. It should help a performance engine run mean, clean and green. If you are planning to build your FA20 engine for additional performance, choosing the HKS 260/266 camshafts should deliver an additional 4-to-6-percent more power at 7,000 RPM without sacrificing any power elsewhere in the RPM range. If that level of additional power puts you in front of the pack, the $1,700 price tag may be worth every penny.
On October 14, 2016