It’s the moment of truth. You’ve invested countless hours and spent tons of money on your new engine and now you’re about to start it up for the first time. Not to add to your stress level during this time, but did you know that the greatest amount of engine wear occurs during startup and the subsequent break-in period largely determines how an engine will run for the remainder of its life? Things just got real. 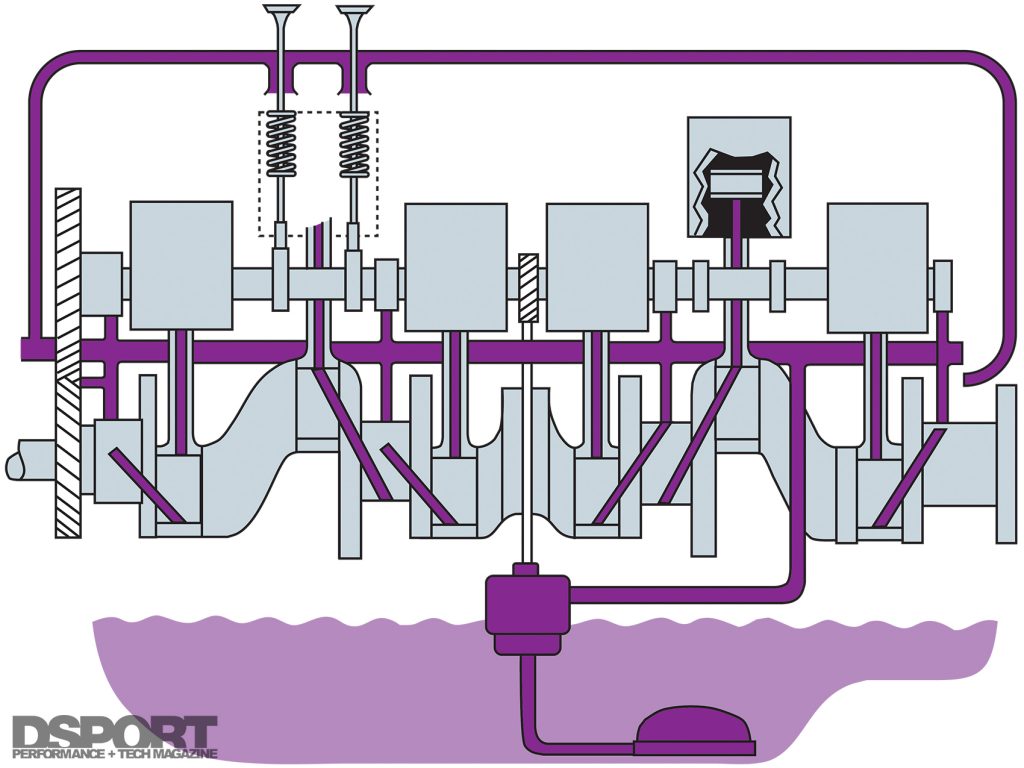 Starting from the oil pan, engine oil is is sucked up by the pickup, pressurized at the pump, sent through the oil galleys and onto the remaining passages to reach the components that need to be lubricated.

When it comes to engine wear, lubrication systems are arguably the most important aspect of any internal combustion engine. In the late 1800s, when steam engines were the primary propulsion method of vehicles, moving engine parts were lubricated with a combination of petroleum, animal fats and vegetable oils. This rudimentary engine lubricant did the job but often led to corrosion, leaky seals and gumming in the valves. Through the refinement of crude oil, high-viscosity oils were developed and deemed an effective engine lubricant. Since the developments of the first lubricating oils, engine lubrication theory and practice has come a long way. In terms of friction and wear reduction, specific additives were incorporated into engine oils to effectively lower startup wear by nearly 30-percent. Simply put, these formulations ensure that a film of lubricating oil exists between moving parts to decrease friction and wear not only during operation but also during the acute moments of startup. 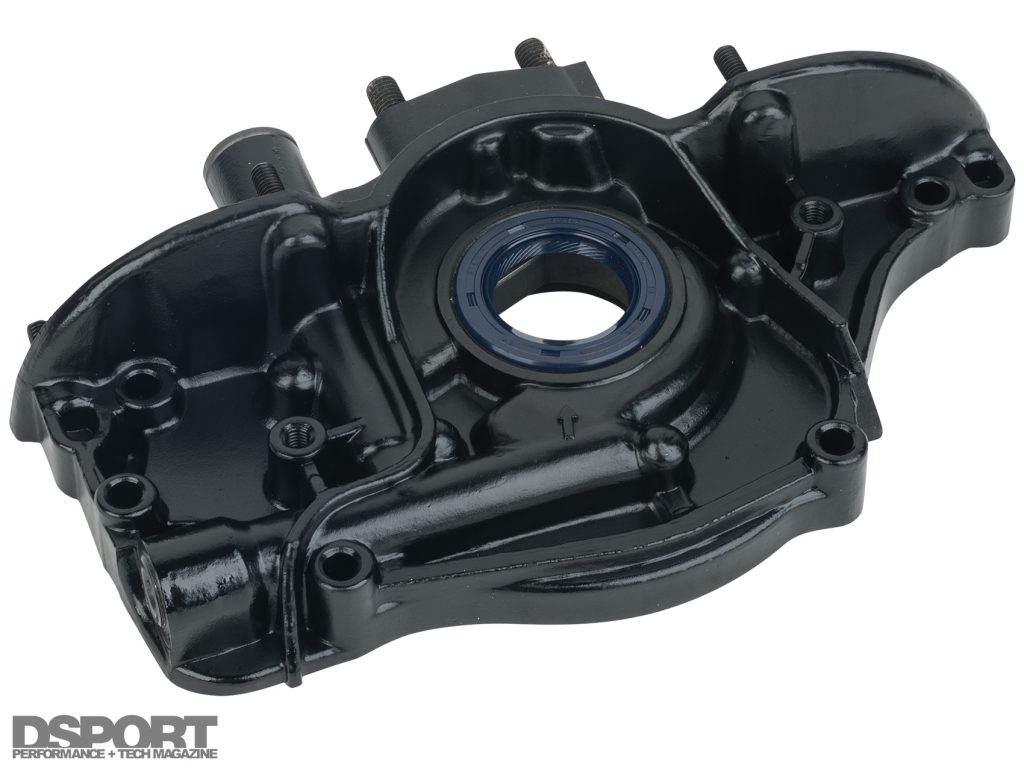 Once running, modern engines reach optimal operating conditions of temperature and, most importantly, oil pressure. With the proper amount of oil pressure, the oil pump can begin to move a volume of engine oil such that it fills the oil galleys in order to reach critical locations within the engine to provide lubrication to specific components. These components include the main and rod bearings in the bottom end and the camshafts in the top end. There is, however, a period of momentary low pressure during the startup event in which crucial lubrication simply does not exist. According to studies completed by the Society of Automotive Engineers (SAE), “engine operating variables and additives in fuels and motor oils influence corrosion and, therefore, startup wear. Long shutdown periods, low engine temperature, and high intake-air humidity increase wear”. During this same study, the SAE found that wear is the highest during cold startup, which is directly related to the lack of oil pressure during the initial starting event.

(1) Pre-oiler pre-charge air pressure gauge. (2) A standard schrader valve allows for the pre-oiler to be pre-charged with compressed air. (3) A piston pushed by compressed air moves engine oil into the engine. (4) Either a mechanical on/ off valve or electronic solenoid can be used to shut off the flow of oil. (5) The outlet of the canister is usually connected to the engine with AN fittings.

When cranking a brand-new engine, aside from engine assembly lube that may or may not have been applied to critical components, the imperative film of lubrication has never been formed to protect the moving internal components. In other words, the first time you ever start an engine, you’re basically starting it dry. The engine doesn’t get properly lubricated until a series of events occurs. This process relies on oil pressure being established, the oil pickup filling with engine oil, the oil pump moving the oil into the galleys and the engine oil reaching all necessary components to order to begin the delivery of lubrication to moving components. While these steps reach completion in a matter of milliseconds, there is a momentary period where lubrication is lacking. 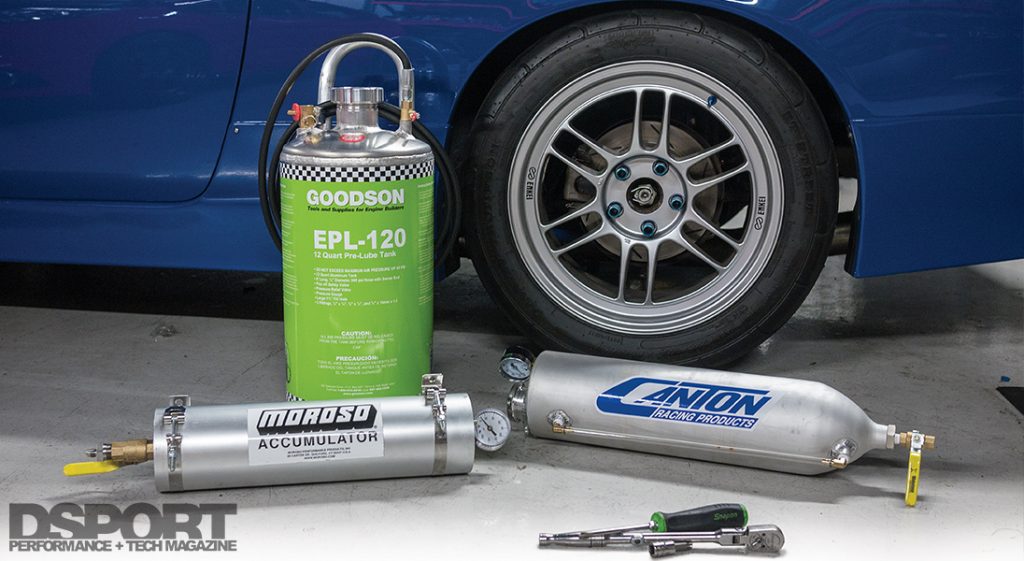 Engine pre-oilers can come in a variety of shapes and sizes to meet the exact requirements of the end user.

To remedy this logistic complication, brand-new engines can be pre-oiled to simulate the series of events that takes place when an oil pump reaches it’s operating conditions and sends pressurized oil to all locations where its needed in an engine. Companies such as Canton Racing, Goodson and Moroso each offer either dedicated pre-oilers or oil accumulators that can be used to pre-oil engines by injecting engine break-in oil or regular engine oil by means of compressed air. 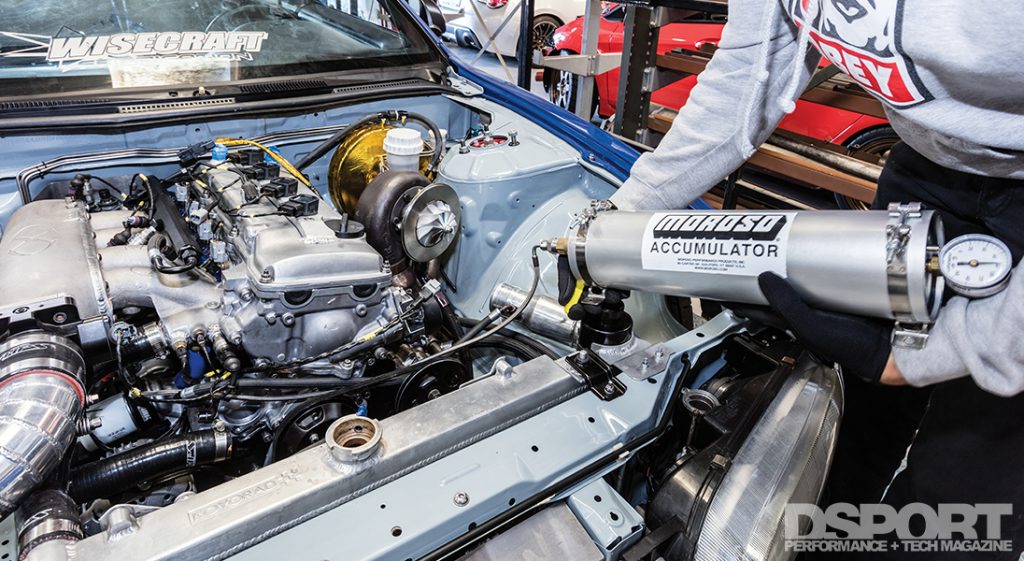 In general, oil accumulators are comprised of a large canister typically ranging in capacity from one quart up to 12 quarts in which one end is filled with compressed air that is used to push a piston and a volume of oil into the engine. On one end of the canister, a standard Schrader valve allows compressed air to pre-charge the canister. Typically, an air pressure gauge is located on the same end of the Schrader valve to indicate the amount of pre-charged air. On the opposite end of the canister, an outlet regulates the flow of oil. In the case of a brand-new engine, we would recommend the use of engine break-in oil. On most units, the outlet can be manually controlled with a simple on/off valve or with an electronic solenoid. The connection from the pre-oiler to the engine can be made at any location that sees oil pressure by the oil pump. We found that the easiest method is to utilize an oil filter sandwich plate. Once the connection is made, the pre-oiler filled with oil and pre-charged with compressed air (pre-charge pressure varies by manufacturer), the valve on/off valve is activated (or manually opened) to allow the pressurized oil to enter the engine and begin to fill the galleys and pre-lubricate the engine’s moving internal components. Once you’ve pre-oiled your engine, you can start it up for the first time and rest assured that you’re reducing startup wear. 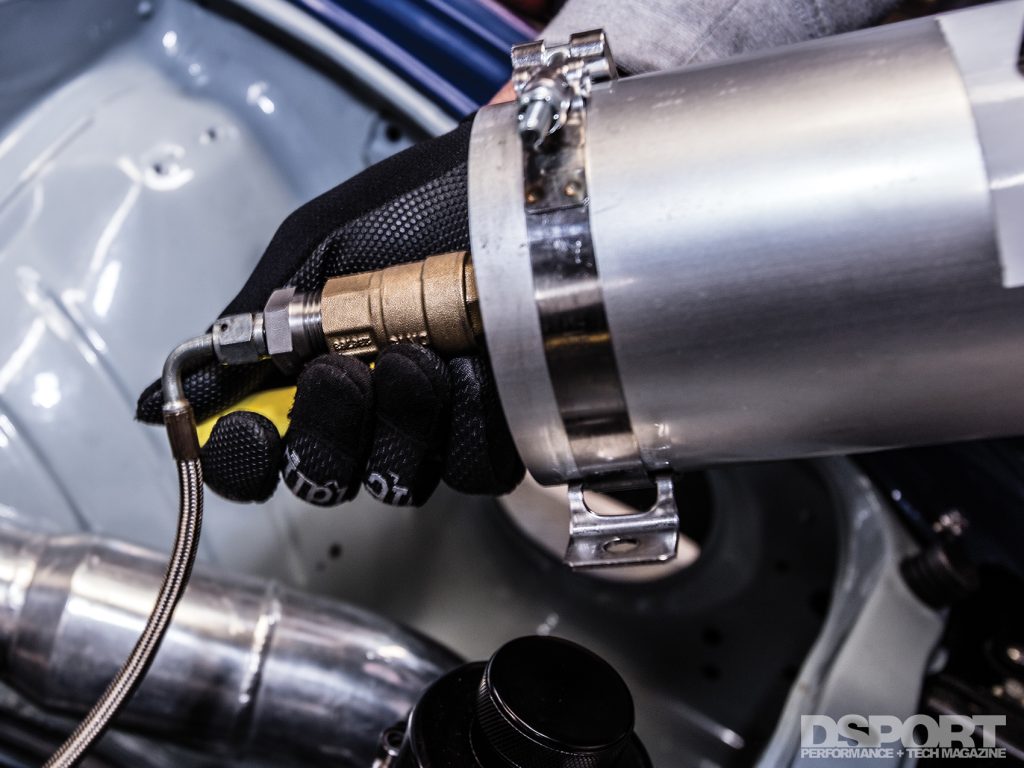 1) To ensure that the piston is all the way back in the pre-oiler, use compressed air through the outlet. 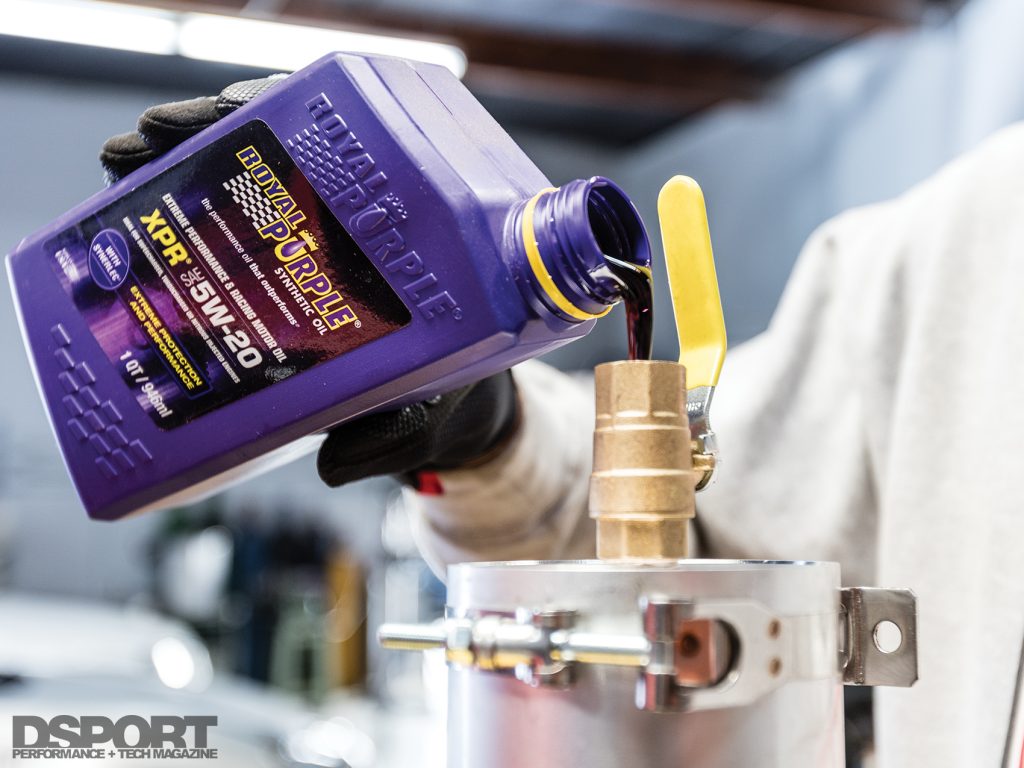 2) Fill the pre-oiler with the desired volume of engine oil or engine break-in oil. (Check with the manufacturer of the oil for their recommendation for new builds or rebuilds with honed cylinders and new piston rings) 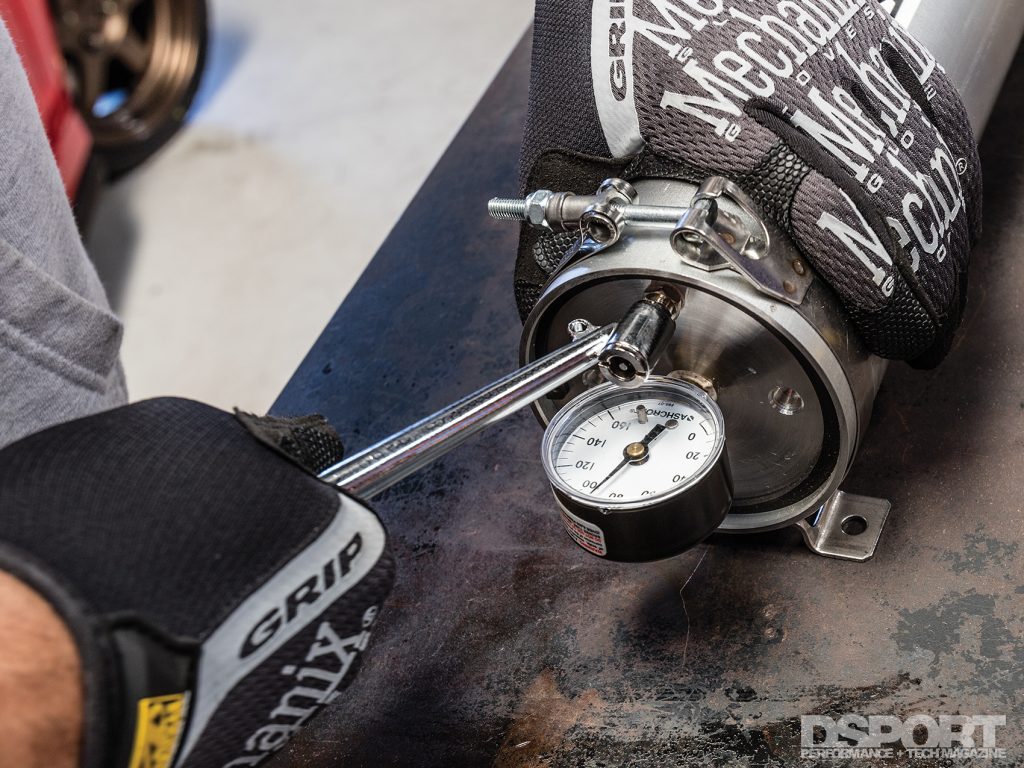 3) Pre-charge the pre-oiler by using the schrader valve to fill with compressed air (check with the manufacturer on the recommended pre-charge air pressure). 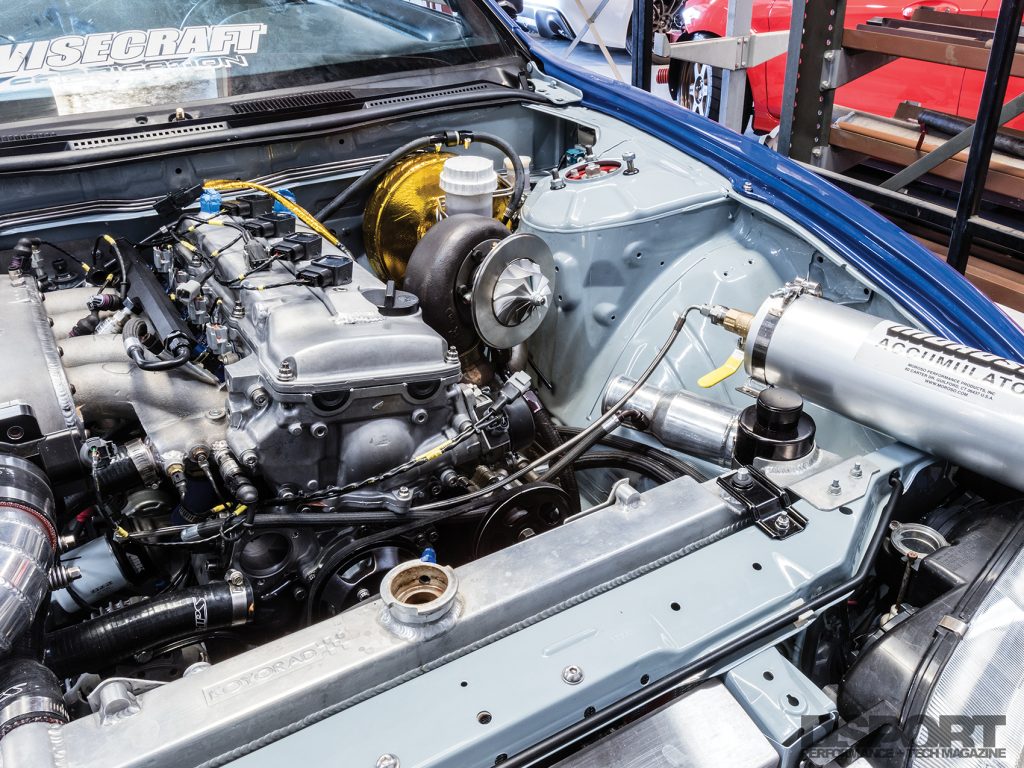 4) Connect the pre-oiler to the engine to any location that sees oil pressure from the oil pump.

5) Open the valve to allow oil to flow into the engine until the entire volume of oil is depleted. 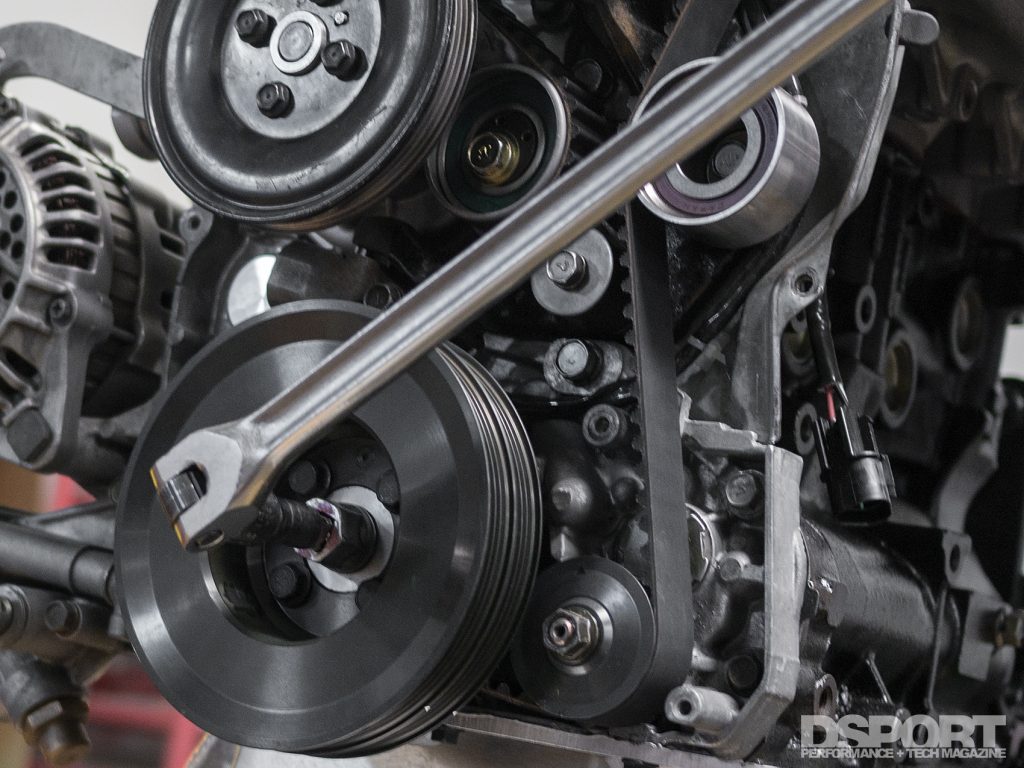 PRO TIP: As the pressurized engine oil is flowing from the pre-oiler, turn the crankshaft by hand a full revolution to ensure complete lubrication.