No one would argue that the RB26DETT is one of the best inline six-cylinder engines to come out of Japan. Depending on the qualities that you prioritize in an engine, some could make a valid argument that it is even superior to Toyota’s 2JZ-GTE. The engine’s success in motorsports and the records it has set in the tuning world have put it in the upper echelon of performance engines. While it is one of the most expensive engines to build, it does offer some options unavailable in other platforms. In fact, it is the only Japanese performance engine where the OEM offers a high-performance version of the engine block. Today, there are no less than five variations of the RB26DETT engine block. After understanding the attributes that make a great high-performance block, we will explore the five blocks in detail to help you determine which is best for you.

Text by Michael Ferrara // Photos and Measurements by Joe Singleton 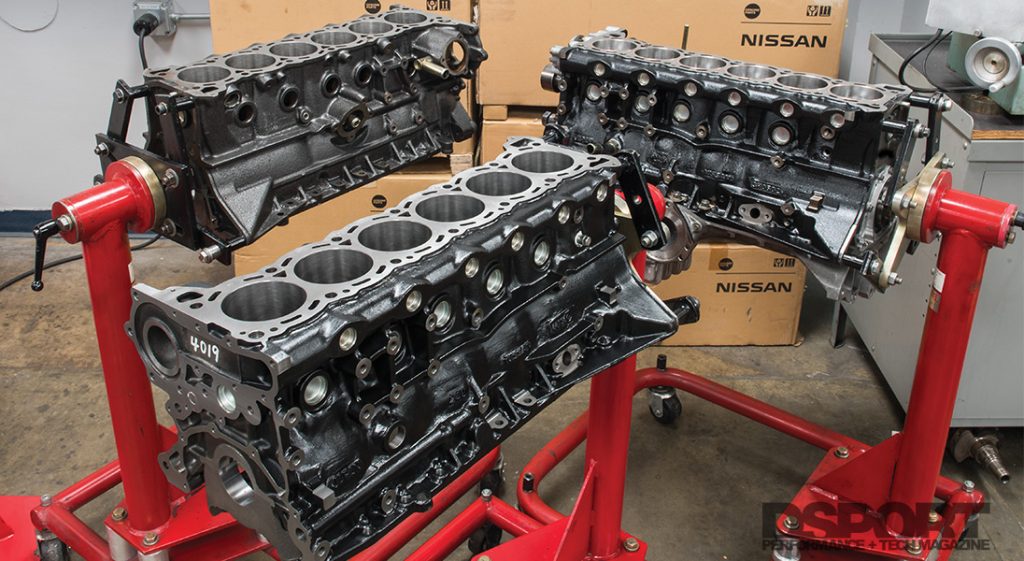 “Cast iron” engine blocks are made from gray cast iron. This material gets its name from the gray color that is produced when it is fractured. It is the most common form of cast iron. However, not all gray cast irons are created equal. Some types of gray iron may have a tensile strength of just 20,000psi while other types may have tensile strengths up to three times that level (60,000psi). By adding nickel and some other alloys to gray cast iron, the strength, stiffness, hardness and fatigue resistance of the material can be improved. Hence, gray cast iron engine blocks that use a higher-nickel-content will have a superior strength even when dimensionally they are equivalent. While we couldn’t get official answers from Nissan or NISMO to confirm, there is a widely held belief that the N1 (24U) and GT (RRR) engine blocks are cast from a superior material that has a higher nickel content.

In addition to using a superior material, N1 and GT blocks are also said to have thicker cylinder walls and deck surfaces for improved power handling and durability at high power levels. It is important to note that the porosity of a casting also affects its strength and fatigue resistance. Voids in a casting are breeding grounds for cracks to develop. While the surface appearance of a casting doesn’t necessarily indicate the likelihood of the presence of internal voids, superior casting methods usually show an improved exterior surface. By inspecting all of the current and past versions of the RB26 block, the new-generation N1 block definitely stands out from the rest. The quality of the exterior surface finish is much finer than any of the other RB26 blocks. While we are still trying to get an official answer from Nissan on the reason, it is most likely that an improved casting method is used. As such, it is possible that the improved casting method may make the new-generation N1 block the least likely to develop cracks at extreme power levels. 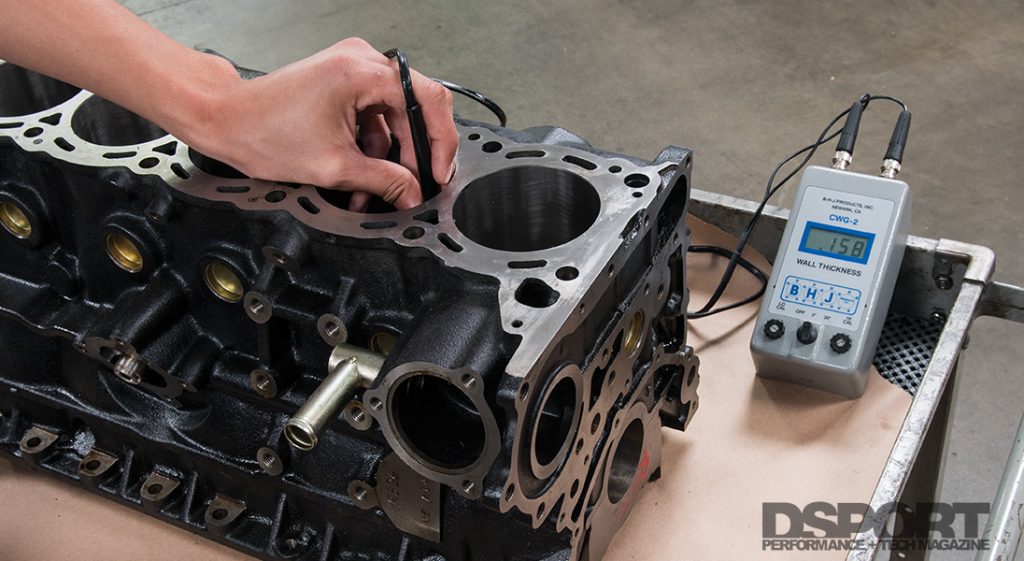 Measurements were made in four directions and three depths in the cylinder with a wall thickness tester. The North direction is the front of the engine and the South direction is the back. Depths were at 1.0, 2.0 and 3.0 inches down from the deck surface.

Fortunately, our Club DSPORT precision engine development facility has a number of RB26 engine blocks on hand (including two of the scarce GT blocks that now fetch over $11,000 when they can be found). While we couldn’t cut up blocks to get all of the answers, we were able to sonic check all of the blocks to determine the wall thickness across a dozen locations in each cylinder, as well as six locations on the deck surface.

There is a popularly held belief that when Nissan originally cast the first 500 RB26DETT engine blocks, that additional material was cast into the blocks and that a higher-nickel-content material was used. This supposedly was the recipe for the N1 block released to the public later. According to the legend, Nissan did this to ensure that the first 500 engine blocks that were made to homologate the vehicle would also be able to survive the rigors of Group A endurance racing. If the legend is correct, this engine would only be found in R32 GT-Rs manufactured in August of 1989 with a VIN number between BNR32-000054 and BNR32-000453 (100 blocks were likely reserved for the racing program). Since finding and verifying this legend is next to impossible, we only mention this so that you would be aware. 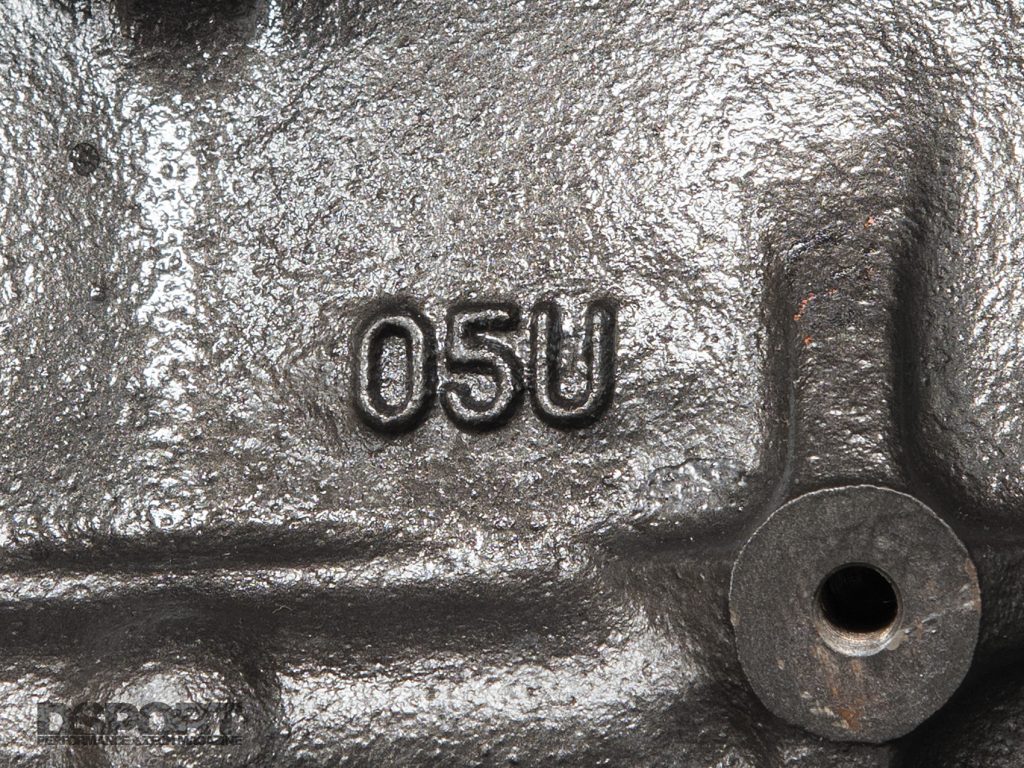 05U is the designation of the standard RB26 engine block. We’ve run stock-bottom-end RB26 engines to over 850whp in street/strip trim.

The standard (05U) engine block has been known to deliver some incredible performance and reliability. We took one of these blocks above 850whp in a street/strip application and witnessed no ill effects. For endurance and road-racing applications, the consensus is that any power levels over the 600-650whp range are better suited for an upgraded N1 engine block. The standard 05U block we tested had an average cylinder wall thickness of 0.194”, with the thinnest cylinder wall measurement coming in at 0.134” (cylinder #2, north). Of course, any cast component is subject to core shifts in the process so no two blocks will measure the same so the thin spot measurement is likely to vary. Average deck thickness measured 0.295”. When inspecting these blocks for cracks, look between the freeze plugs on the “turbo” side of the engine. 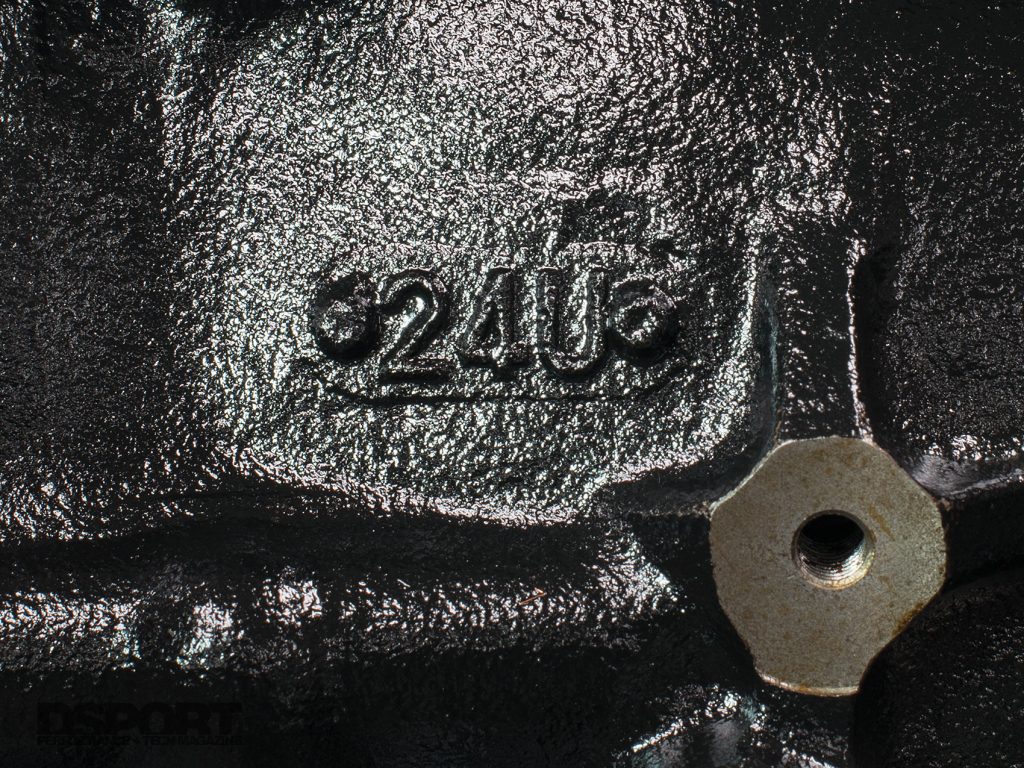 Upgrade the block when over 650whp in road race configuration. First-gen N1 blocks have a 24U designation and a rough surface.

Better material, thicker cylinder walls and thicker cylinder decks have been the promise of the N1 block for some time. In the early 2000s, these blocks could be purchased for just under $1,000. Then the price came up to the $1,500 range and finally near $2,000 before this first-generation N1 (24U) block was discontinued. Our first-generation N1 (24U) we tested had an average cylinder wall thickness of 0.198”, with the thinnest cylinder wall measurement coming in at 0.127” (cylinder #2, north). So either we have a magical “First 500” 05U block or perhaps the N1 Gen-1 cylinder walls aren’t actually cast thicker? In any case, we did find that the deck surface was in fact thicker, checking in at 0.345”, roughly 1mm thicker. As we said before, the N1 block would be superior due to its improved material over the 05U, even if the dimensional cylinder wall thicknesses are nearly identical. 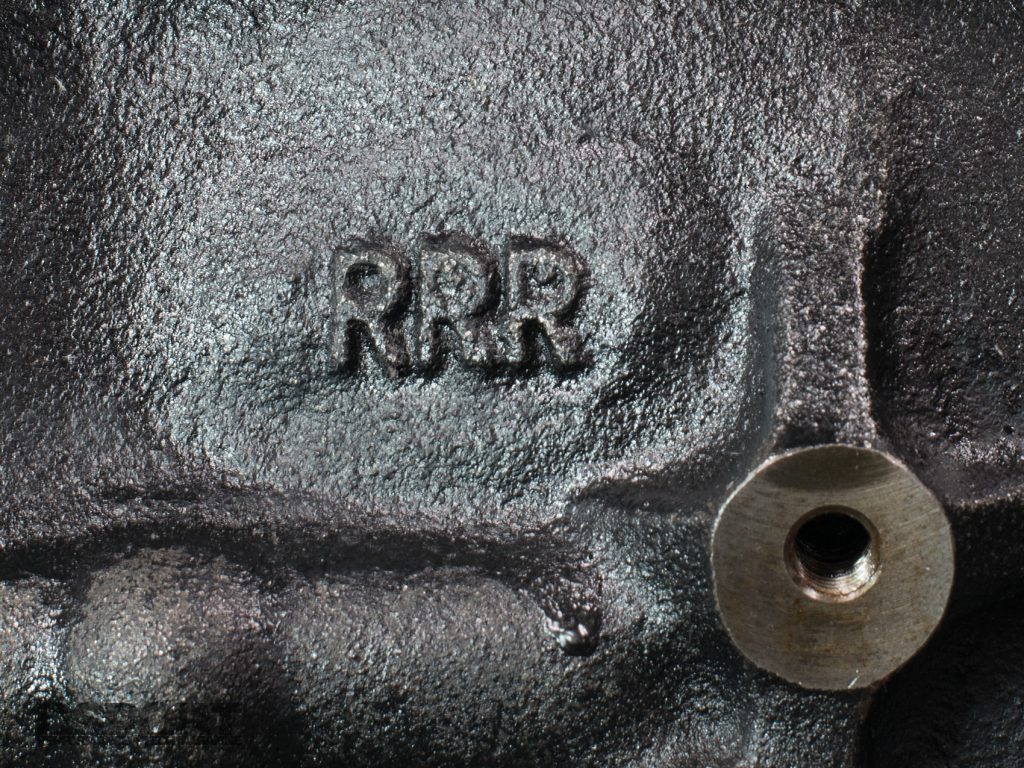 Only one run of the GT blocks was ever made. Plan on paying over $10K for a new one or over $5K for a used if you find an RRR.

Depending on the source, there was anywhere from 100 to 500 of the rare GT500 (RRR) engine blocks made. Roughly 20 of these blocks made their way into Z-tune editions of the R34 GT-R as 500 horsepower 2.8-liter special builds. The remainder of the production run was sold through Nismo as a GT block. Originally the selling price was about $3,000, which was more than double the cost of an N1 block at the time. Today, the going price for a new RRR block when found can fetch over $10,000. Used ones typically bring at least $5000-$6000. In measuring our brand-new GT (RRR) block, the average cylinder wall thickness checked in at 0.239”, with the thinnest cylinder wall measurement coming in at 0.122” (cylinder #5, south). Deck thickness was identical to the N1 blocks, checking in at 0.345”. So while the average cylinder wall thickness was over 1mm thicker than any of the other blocks, it also had one of the thinnest sections of cylinder wall. Of course, this could be compensated by offsetting the bore location in the machining process if a competent machine shop is used. 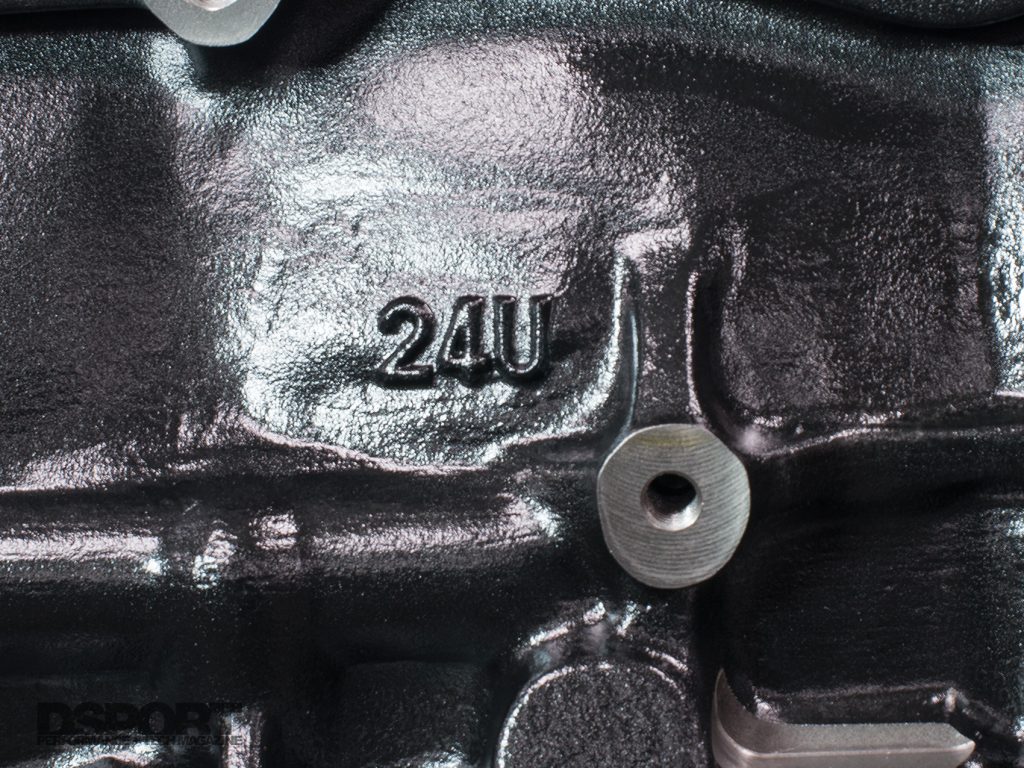 After about a two-year absence, the N1 block has returned. This time it sports a new part number and a new look. Unfortunately, it also sports an extremely high price. With a list price over $4,300, you are lucky to find one under $3,800. So how good is the most expensive RB26 engine block ever offered? Let’s start with dimensions. Measuring our new-generation N1 (24U), we recorded an average cylinder wall thickness of 0.199”. This is basically the same as the original series N1 block. The thinnest cylinder wall measurement came in at 0.110” (cylinder #1, south) which was the thinnest that we recorded in any of the blocks. This particular block showed a good amount of core shift as the difference in thickness in the number one cylinder from north to south was nearly 0.080”. For a serious performance application, the bore location could be corrected by a top-level machine shop to center the overbored cylinder in the meat of the material. As previously mentioned, the casting method for the new N1 block appears to be vastly different from any of the casting methods used in the past. Since years have passed since the original N1 block went into production, it is also likely that the material used in the new N1 block is also improved. What does it all mean? It may be the best aftermarket RB26 block ever offered or it may not. Unfortunately, only time will tell.

A total of 72 measurements are taken on a single block. When trying to get the maximum power handling from the engine, Club DSPORT will relocate the bore centers of the cylinders to maximize the thickness of the thinnest part of the cylinder wall. This is only done in the North and South directions as to not relocate the cylinder in relation to the crankshaft centerline. 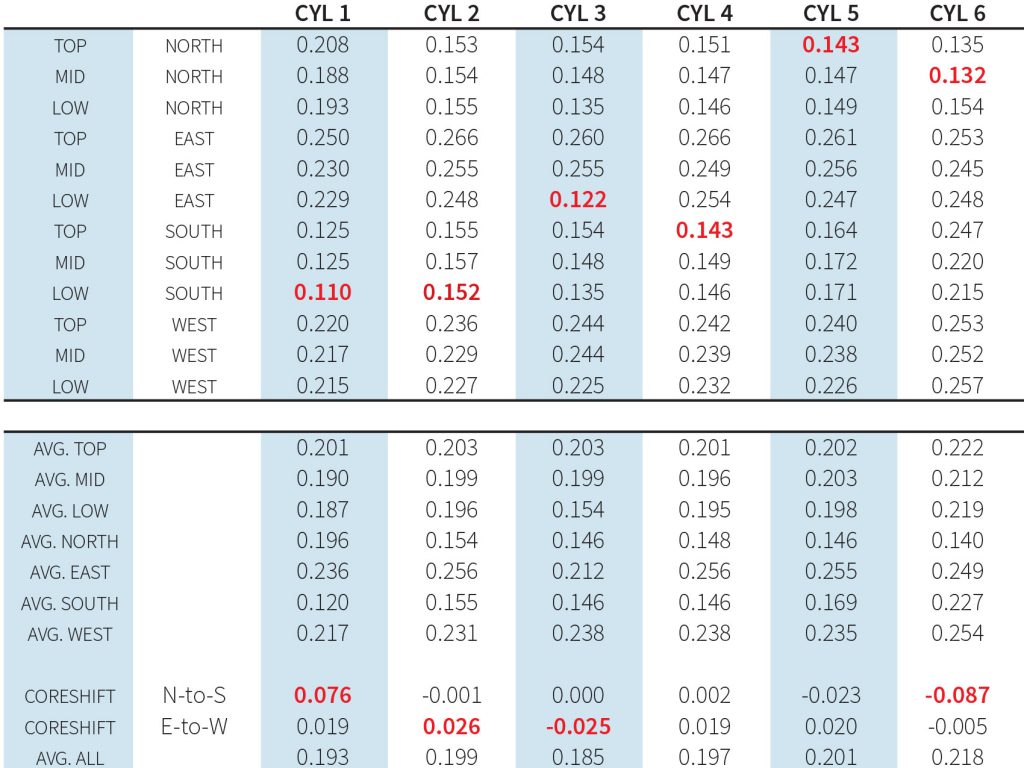 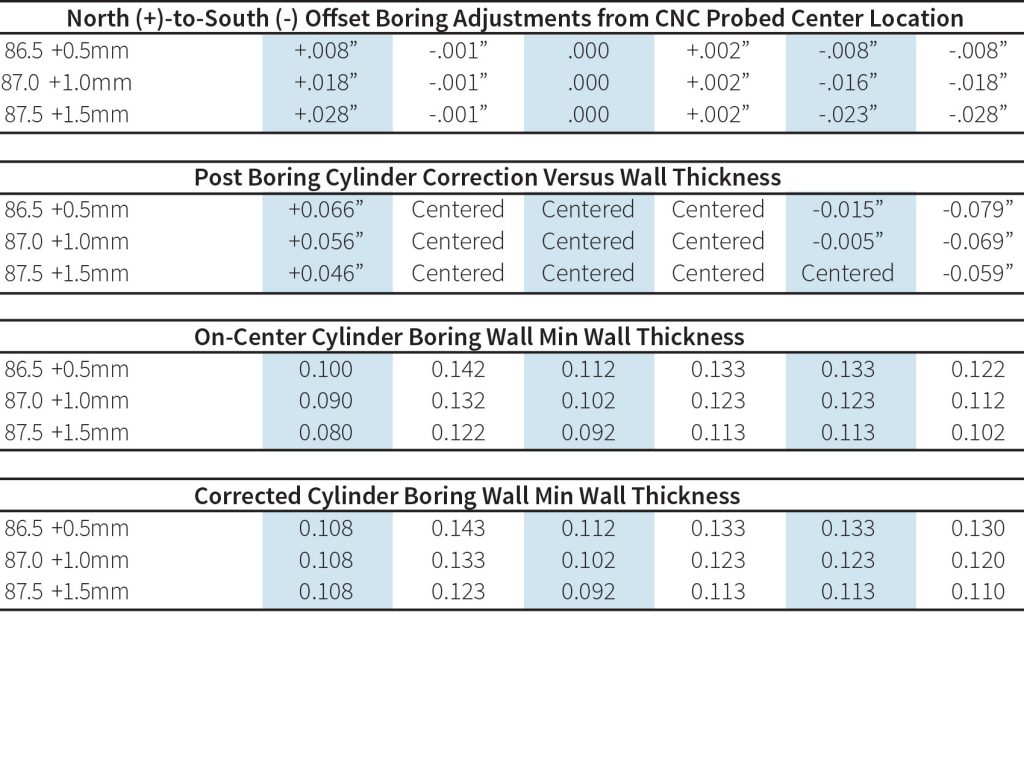 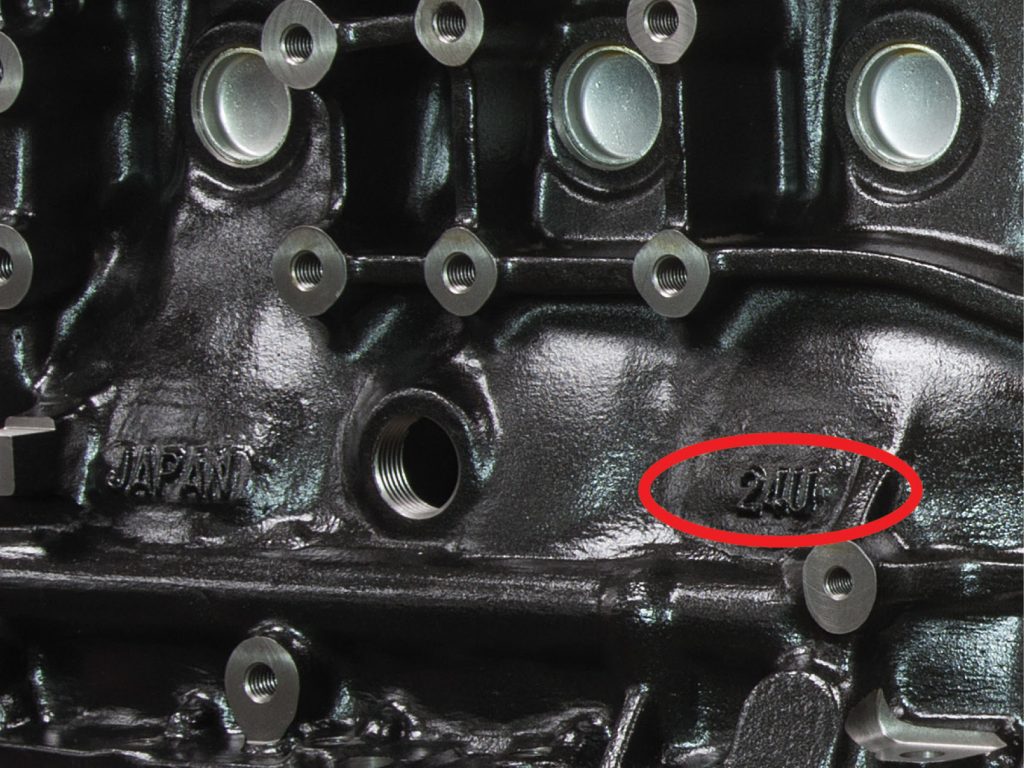 The block’s identification code (05U, 24U, RRR) can be found on the turbo side of the engine, roughly 5 inches toward the rear of the engine from the threaded oil return.

One advantage of starting with a used block over a new block is that any residual stresses present in the block from the casting process will be relaxed from the engine being heat cycled. However, today’s casting methods leave less stress in the part than ever before so don’t be afraid to start with a new engine block for your ultimate build. 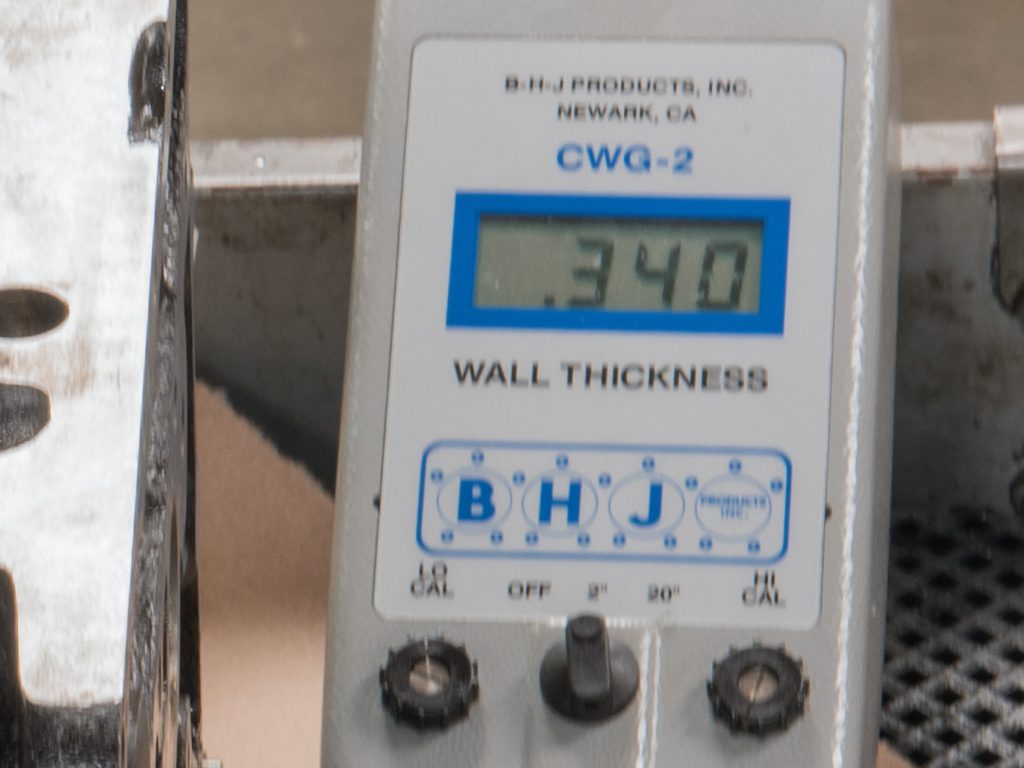 The deck surface of the N1 and RRR blocks is about 1mm thicker than standard 05U RB26 engine blocks.

For the engine described by the chart, Cylinder One would still be able to maintain a 0.108” wall thickness at 87.5mm by changing the bore position to avoid the thin wall on the South side. Using a conventional boring method, the wall thickness of Cylinder One would be only 0.080” at the same 87.5mm bore size. When an RB26 block is sonic tested before its first boring operation, it can be offset bored from the start to ensure that it can continue to be bored in the future up to 87.5mm or maybe even 88mm.

If you are building an RB, you have plenty of options. Since the price of used and new N1 blocks are higher than ever, you may want to consider having a standard 05U block sonic checked and offset bored to maximize the cylinder wall thickness on the overbored engine. This should be done only in the North-South orientation as you do not want to offset the cylinder position in reference to the crankshaft. While this won’t give the strength improvement from the higher nickel content (N1, RRR) in a premium block, it will still improve the overall strength of the overbored cylinder. In fact, having the cylinder bored so that the wall thickness is maximized in the process seems to be a valid protocol for any RB engine block. Hopefully, Club DSPORT will offer complete RB26 short block assemblies in the near future. Stay tuned.