When we last left our friendly-neighborhood Project CRX (Issue #180), we were testing the BLOX Racing 4-2-1 performance headers. These headers allowed our B17A engine to hit the 170 horsepower mark at the wheels. That equates to a very respectable 200 horsepower at the flywheel, pretty impressive for a 1.7-liter on 91-octane. Since that time, Aidan built a custom 2.5-inch (65mm) mandrel bent exhaust system and we’ve talked and talked about doing a cam test. With Aidan living a good five-hour drive from our office, it was a challenge getting it all set up. Thankfully, we finally made it happen. 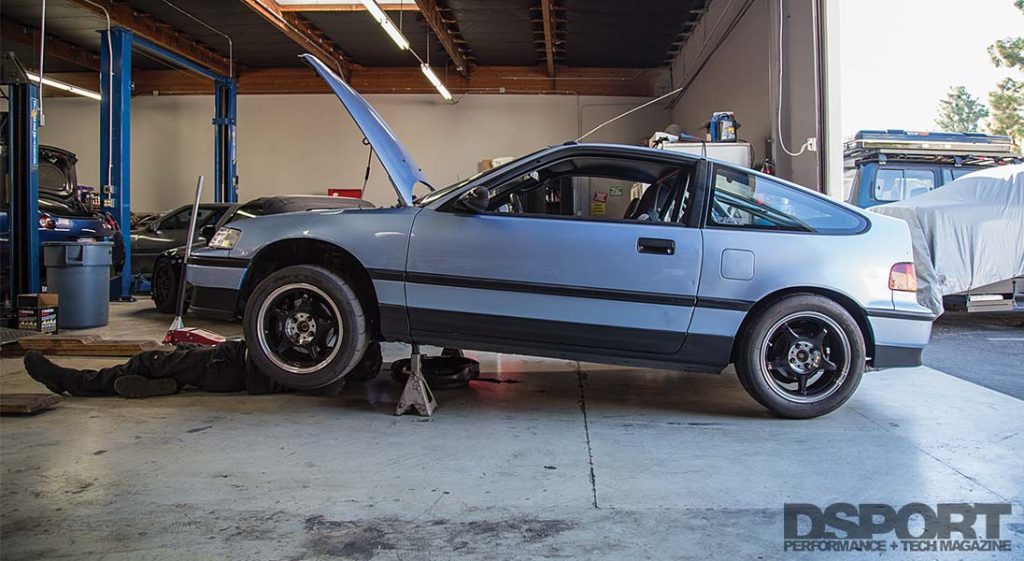 While we had hoped to test the full range of B-series camshaft offerings from BLOX Racing, they had only two different grinds in stock. On top of that, the specs for the two available grinds were pretty similar. The High Speed Lift (HSL) camshaft set (p/n BXCM-10104) features an intake duration of 255-degrees with a peak lift of 12.6mm (0.496”). The exhaust cam in this set features a similar duration and lift (256-degrees and 12.6mm/0.494” lift). 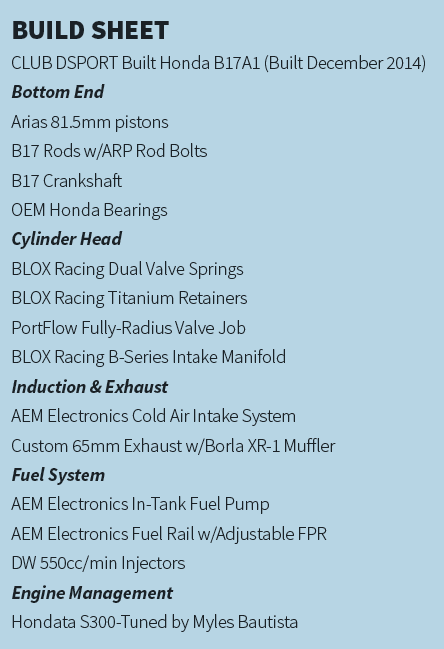 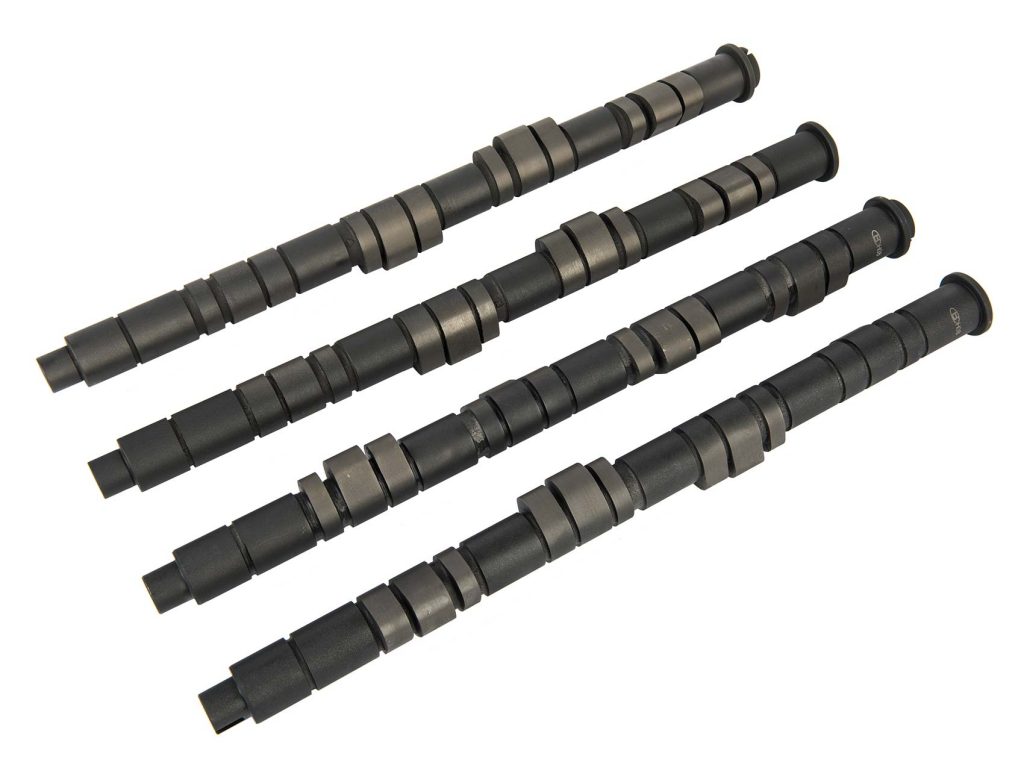 A set of B-series cams will set you back about $600. Make sure that you match the cam with the proper valve springs.

What do we expect the difference to be? If the lift was identical between the Type-B and HSL cams, we would expect the additional duration of the Type-B camshaft to move the peak power engine speed to a higher RPM. However, the lower peak lift on the exhaust cam of the Type-B may cause the peak power RPM to move lower. Without knowing exactly how the valve is being accelerated and lifted and not knowing how the ports respond to higher lifts make this a complete guessing game. The only way to find out is to hit the dyno. 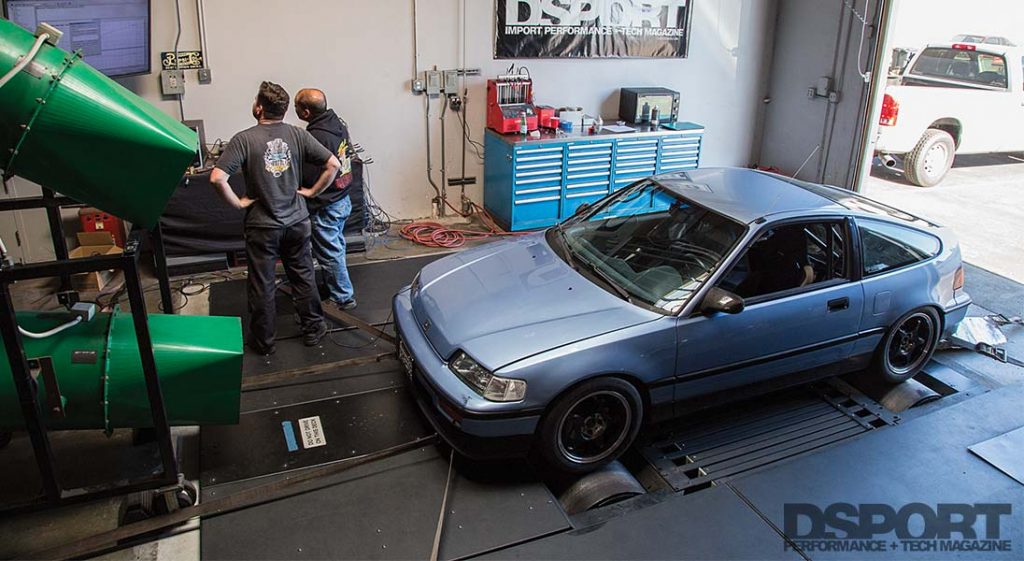 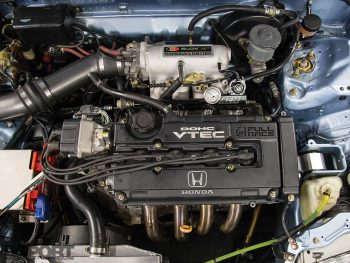 Considering that B-series VTEC engines ranged in displacement from 1.6-to-1.8 liters, there isn’t going to be one camshaft that works best in all B-series combinations. Larger displacement engines will generally appreciate higher duration cams to give more time to fill the larger cylinders. Since this was the shorter duration of the two cam sets, we had a feeling it might work well. The HSL camshafts feature a relatively high-lift and short duration to provide quick opening on the valve events.

Compared to the OEM camshafts, the HSL cams delivered substantially more power and torque everywhere except a flat-spot between 6,500-7,100 RPM. Peak torque increased from 114.8 to 117.1 lb-ft while peak horsepower increased from 169.3 to 183.9. That’s nearly a 10-percent increase in peak power despite having a full exhaust system in place (OEM cams were last tested with an open header). 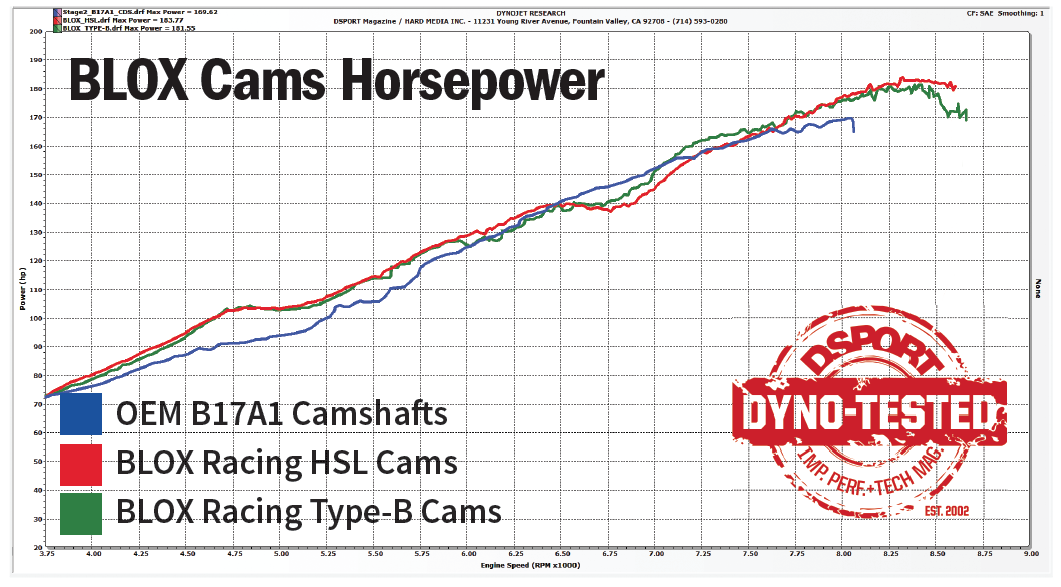 Despite its longer duration, the Type-B camshafts didn’t shift the peak power RPM up the curve as expected. It was nearly identical in performance on the low-lift lobe up to 6,000 RPM. From 6,000-6,500, it sacrificed some power to the HSLs and from 6,600-7,600 it did better than the HSLs. From 7,600 RPM to redline, the HSL cams did better. In looking at the acceleration times from 60MPH to 110MPH on the dyno, the Type-B accelerated in 8.60 seconds versus 8.64 seconds for the HSLs. This is just one example of how a lower peak horsepower number can win a race. 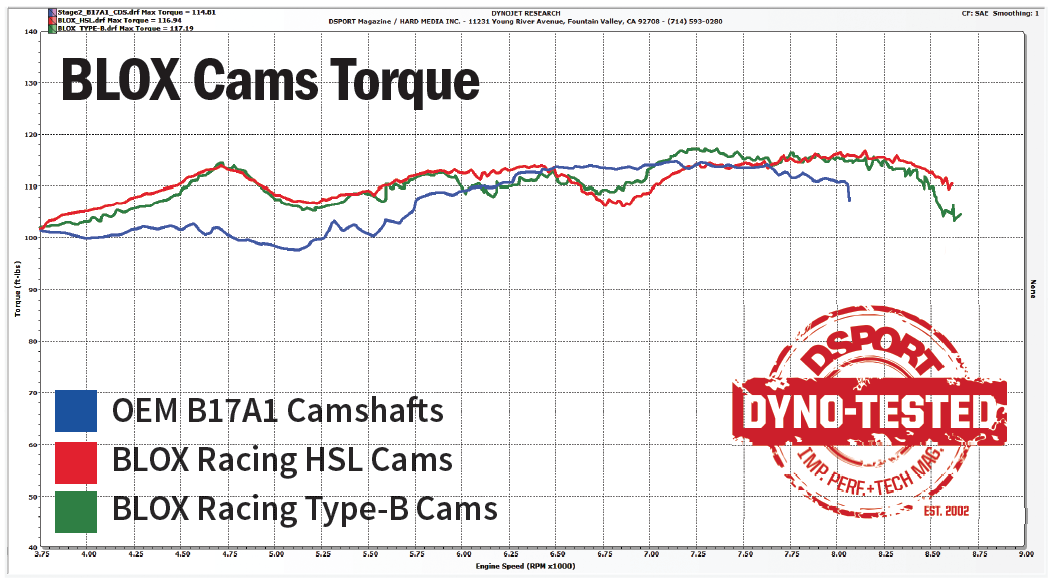 To get a little more data (although we only had two set of cams), we decided to do a mix and match between the two sets. We used the Type-B intake cam (longer duration than HSL) with the HSL exhaust cam (shorter duration but higher lift). The combination made the highest peak torque and with a power figure in the middle of the other two combinations. 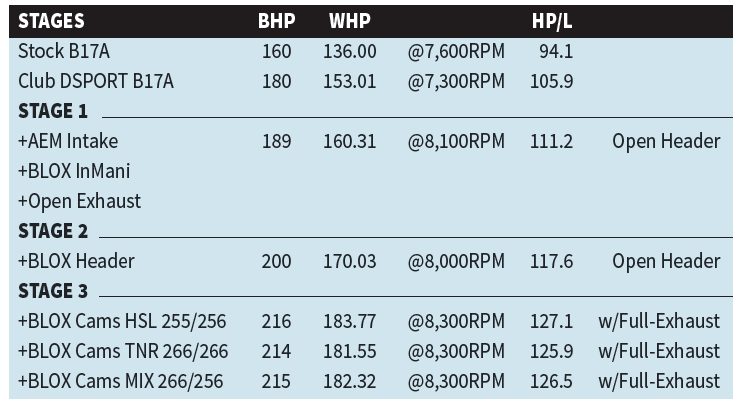 The BLOX Racing B-series cams were a welcome addition to our B17A1. Despite being nearly five-years old, the CLUB DSPORT built engine is still charging hard. All three combinations of the BLOX Racing B-series cams raised peak power to the 181-184 horsepower range at the wheels. This was on 91-octane pump gas. That’s equivalent to about 215 horsepower at the flywheel. We think some fine tuning with some cam gears can get us a couple more horsepower, too. Stay tuned.