With a turn of the key, your ears, skin and teeth are overwhelmed by an external fuel pump vibrating at the same frequency as an ultrasonic electric toothbrush. Instead of vibrating soft bristles against your tooth’s enamel to remove plaque, the continuous, unrelenting buzz from the mega-flow pump acts like an enhanced interrogation device. During the early years of import performance, both competition and serious-street-performance cars relied upon these noise-polluting pumps to meet the fuel flow demands of highhorsepower, fuel-injected engines. Not even giving up your country’s top secrets would stop the torture dished out from these pumps. Fortunately, those days are gone.

Today, a team of two, three or four high-output in-tank fuel pumps silently feed the fuel demands of even the hungriest streetperformance vehicles. With the increased popularity of E85 conversions, the demand for serious pump solutions has never been greater. Understanding the science, limitations and requirements for a properly designed multi-pump solution is essential for maximum performance and reliability. 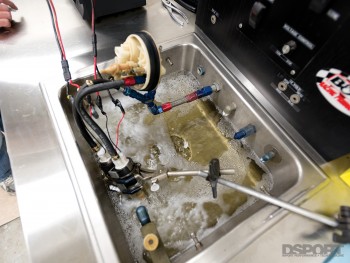 Nearly all multi-pump systems run the pumps in a parallel configuration. The inlets of all the pumps draw from the same sump or tank while the outlets of the pumps are joined together with one or more “T” or “Y” connectors. Running pumps in parallel allows the pumps to add the volumetric flow of each pump together. For example, if you had two identical pumps that individually flow 100lph at 45psi, two of these pumps in parallel would deliver 200lph (100lph + 100lph) of flow at 45psi. A third and fourth identical pump in this example would increase the flow rate to 300 and 400lph, respectively.

When pumps are plumbed in series, the first pump draws from the sump or tank then delivers its output into the suction side of the second pump. This configuration allows identical pumps to produce the same flow at twice the operating pressure. If two identical pumps that flowed 100lph at 45psi are set up in series, the twopump system will deliver 100lph of flow at an operating pressure of 90psi. So what would the flow rate be at 45psi of two identical pumps in series? This will vary from pump to pump. Essentially, it will be the flow rate of one pump at 22.5psi (half the operating pressure). This may be anywhere from 10 to 40-percent more flow than a single pump, depending on the flow versus pressure curve of the pump.

IF THE PROPER SAFEGUARDS AREN’T IN PLACE THE ENGINE WILL RUN LEAN AND MELT DOWN
If total fuel flow of a parallel pump system is simply the sum of the flow rates of all of the pumps at the given pressure, what’s the disadvantage of adding more pumps? In addition to cost, fitment issues and plumbing considerations, there is a more serious consideration when increasing the number of pumps. The serious consideration of using multiple pumps is similar to that of adding hard drives to a RAID 0 drive array. While adding hard drives increases the volumetric data flow of the array, it also decreases the array’s reliability. In the case of a RAID 0 or any multi-pump fuel system, the failure of a single hard drive or fuel pump can result in total data or engine loss. In multi-pump fuel systems, the loss of a single pump is often masked during normal driving conditions. When fuel demands are high, the system with a single failed pump will fail to supply an adequate amount of fuel. Fuel pressure then drops below the desired target. If the proper safeguards aren’t in place, the engine will run lean and melt down. The best way to avoid this is to stick to a singlepump solution. When no single pump can meet the fuel demands, a system with the minimum number of pumps to meet fuel demands is best. If a double-pump system meets the demands, go that route (instead of opting for a triple- or quadpump solution). Of course, a triple- or quad-pump system may be the only choice for ultra-high horsepower E85 applications.

During vacuum conditions, there is essentially a negative amount of boost so the operating pressure will be less than the base fuel pressure. The base or static fuel pressure is always initially set with the vacuum/boost reference hose disconnected from the regulator. 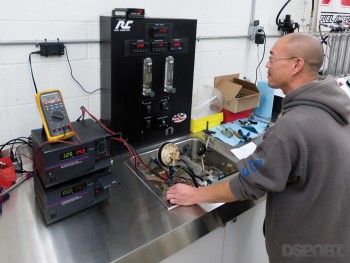 Two different pumps both rated at 255lph at 45psi will often have considerably different flow performance at lower and higher pressures. This is why it is important to look at the flow curve for the pumps that will be used in the system. Most pumps will have a linear flow curve up until the point that the internal relief or bypass valve opens to limit the maximum load on the pump. At this point, the flow rating will drop off considerably. The slope of the linear curve varies from model to model. Some pumps, like the venerable Bosch “044”, have a very gradual slope. As a result, the 044s show minimal reductions in flow as operating pressures are increased. The dual 044 pumps we tested in the Powerhouse Racing twin setup showed a drop in flow of only to improve high-pressure performance and extend the maximum operating range of the pump. While modifying the pressure relief valve eliminates a built-in protection for the pump, the service life for the pump is generally not reduced if the base fuel pressure remain at 45psi. In these cases, the modified pumps will only experience increased loads when boost pressures are high. Since the high boost pressures occur for relatively short periods of time, reliability still remains high on these modified pumps.

Gasoline acts as an effective lubricant for fuel pumps. Unfortunately, E85 contains only 15-percent gasoline. Being hydroscopic in nature, E85 also tends to draw water into the fuel system. This reduction in lubrication and introduction of water to the fuel system can wreak havoc on fuel pump internals. The latest-generation of E85 compatible pumps rely upon improved materials that provide an extended service life on E85. 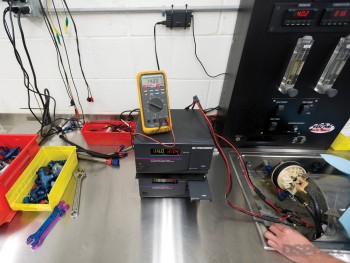 Aftermarket multi-pump systems demand two-to-four times the current capacity of the factory single in-tank pump. Never rely upon factory wiring to power aftermarket fuel pumps (even single pump upgrades). Instead, use highquality (not Made in China), high-current relays along with the proper gauge wire for the current demands. A number of control strategies can be employed for proper operation of the pumps. Some strategies will involve staging a primary pump along with a single or multiple secondary pumps while other strategies may use pulse-width-modulation (PWM) control of the pumps. These strategies will be discussed in detail next month, so stay tuned.