SUBARU’S GVB WRX could be one of the best values in the segment, when measuring performance versus value. It’s less expensive than similar all-wheel drive sedans yet the WRX benefits from its torquey, turbocharged 2.5- liter EJ255 engine. When Subaru released this sedan, its bold lines and flared fenders made its silhouette difficult to discern from its big brother, the STI sedan (with exception of the rally-inspired wing). Our test platform had 35,000 miles on the odometer and enjoyed those miles in completely stock form. Baseline pulls revealed that the WRX comes underrated from the factory. Subaru advertised that the WRX produced 265 brake horsepower at 6,000 RPM and 244 lb-ft torque at 4,000 RPM. With a fifteen percent driveline loss taken into consideration, we anticipated wheel horsepower in the neighborhood of 225 and torque around 207 lb-ft. Instead our baseline pulls revealed that this WRX made 251.47 horsepower and 265.65 lb-ft torque at 3,750 RPM, at the wheels, a noticeably greater output from the start. Text by Richard Fong // Photos by Jun Chen and Richard Fong // Testing by Jeren Walker DSPORT Issue #146 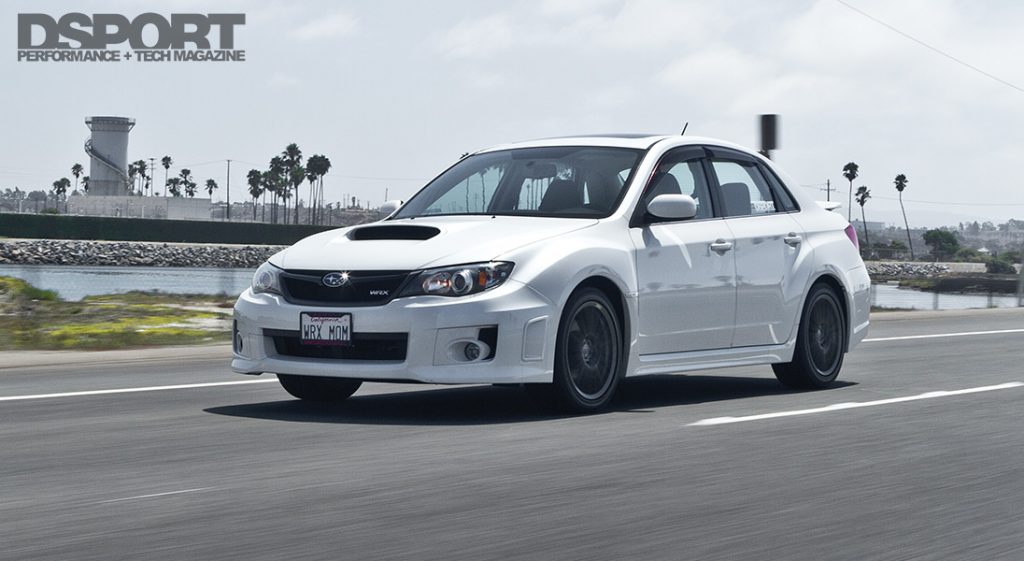 Since turbocharged vehicles thrive and function more efficiently when allowed to breathe, the first part of our Test & Tune focuses on opening up the paths in and out of the turbocharger. Allowing high-enthalpy gasses to exit the turbine housing to the atmosphere is one effective means of gaining more power at the wheels. This effort is often thwarted at the OEM level, as most factory exhausts are designed to comply with sound and emissions requirements, which leads to choking the exhaust path and limiting performance. Given the factory catalytic-back exhaust system’s restrictive 2 3/4-inch diameter B-Pipe and 1 5/8-inch Y-section and mufflers, this was the first place to look for more power. The Ark Design Road Spec Exhaust for the Subaru WRX features a full T304 stainless-steel construction with a 3-inch mid-pipe, a straight through pre-silencer that splits into two, 2.5-inch pipes that terminate into stainless steel oval mufflers. The Road Spec Exhaust was designed to be quiet enough for street use while offering measurable performance gains. We decided to quantify the exhaust note with a decibel meter. The exhaust proved pleasantly quiet, registering in at 70 dB at idle, and up to 90 dB at 4,500 RPM, the exhaust is safely below even California’s strict, maximum allowable sound level of 95 dB. 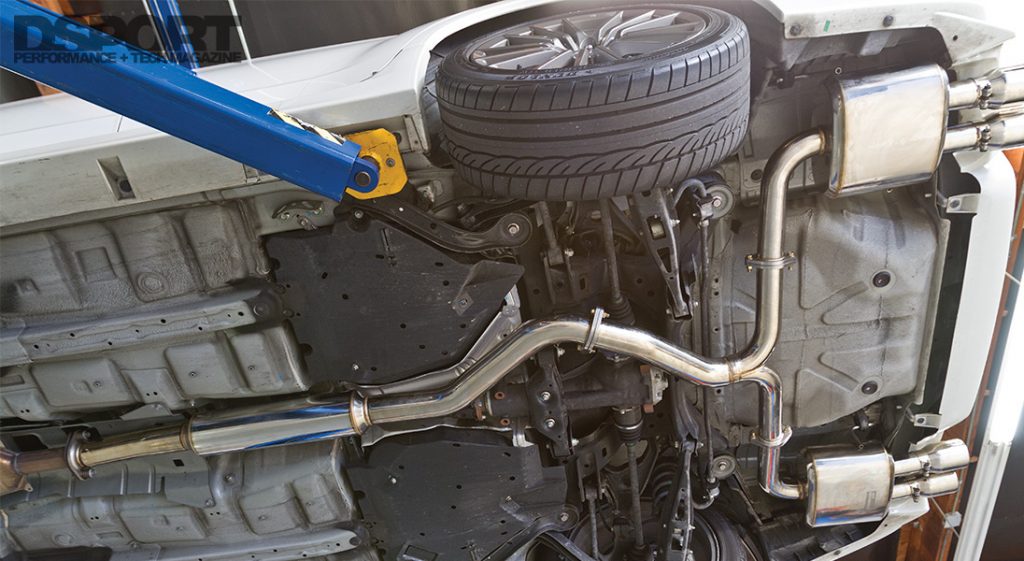 The Road Spec Exhaust features spot on fitment and a durable T304 stainless steel construction throughout.

To help the compressor ingest ambient air more readily, ditching the factory airbox and panel filter was a must. In some cases, the increased volume of air permitted to flow into the engine creates a slightly lean condition and, at the same time, an increase in power. Perrin Performance’s Cold Air Intake (CAI) for the WRX replaces the stock intake tube and air box. The CAI includes an aluminum pipe with mass airflow sensor port and a reusable cone filter. The pipe positions the filter partway into the fender well in order to draw in cooler and denser air. The factory splashguard remains in place to protect the filter from debris.

Finally, as seems to be the case with most modern vehicles, a reflash to optimize air/fuel ratios rounds out the first round of upgrades. To reflash the ECU, we turned to Cobb Tuning for its easy-to-use AccessPort solution. For basic bolt-on parts, Cobb offers free downloadable tuning maps for its customers that suit a variety of typical parts combinations. Custom tuning is required when modifications become more elaborate, changes to fuel delivery and ignition timing become necessary, and when boost pressure is raised. 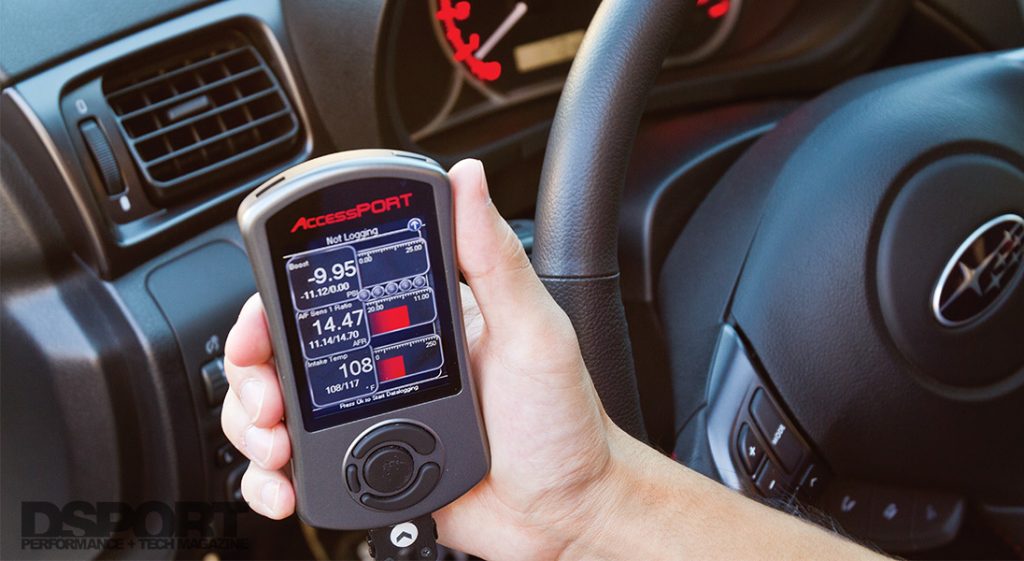 The Cobb Tuning AccessPort V3 interfaces through the OBDII port and can both monitor and datalog various channels of your choice. 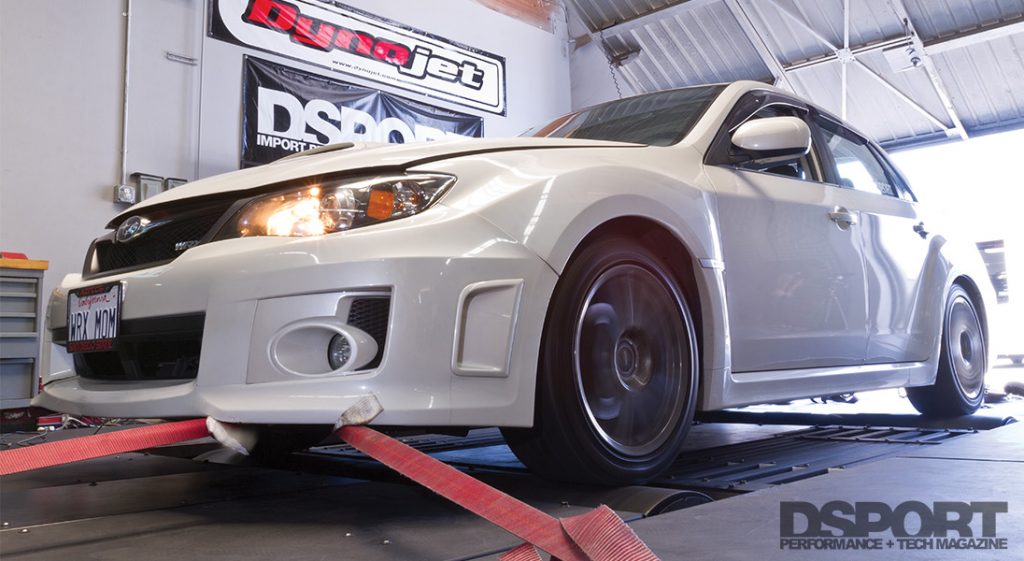 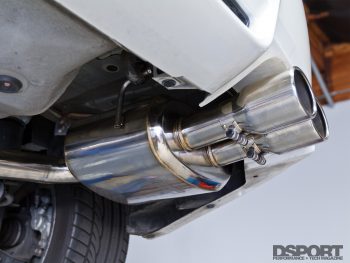 The first component tested was the ARK Design Road Spec Exhaust. The full stainless-steel construction of this exhaust weighed in at 47 pounds, which is five pounds heavier than the stock exhaust. However, since this is a street exhaust, it should offer improved durability in the long run due to the thicker walls of the piping and mufflers. Installation time was only 45 minutes, and fitment was spot on. With the factory ECU tune in place, the exhaust helped to increase peak power from 253 horsepower to 261. The greatest incremental gains were 12.02 horsepower and 10.35 lb-ft torque at 6,100 RPM. The relief of backpressure in the turbo helped the engine produce power more efficiently, but its possible that the air/fuel ratio became leaner in the process.

The ARK Design Road Spec Exhaust performed as expected, reducing exhaust back pressure and helping the turbocharger breathe easier and in turn, make more power. This was accomplished without any reflash or tuning.

The next component tested was the Cobb Tuning AccessPort V3. The V3 unit is the size of a smart phone with a large color display and Cobb’s signature four-button controls. Connecting the AccessPort involves simply plugging the device into the OBDII diagnostic port. Since most vehicles come from the factory with a generic ECU tune intended to work with all fuels across the country, Cobb released special tunes for specific areas, designed and optimized for local fuel quality. For California, we loaded the ACN 91 map (unmodified car, Arizona, California and Nevada 91 octane tune), which is optimized for our terrible, high ethanol content gasoline. Cobb Tuning advised that this tune does not necessarily offer improved performance, rather it is designed to be a safer, more conservative tune given the poor fuel quality we have. On the dyno, peak power and torque fell back a few points, while air-fuel ratios remained consistent and steady without realizing a lean condition.

The Cobb Tuning AccessPort ACN91 (Arizona, California, Nevada 91 octane) map was designed specifically for vehicles in these states using 91 octane fuel with higher levels of ethanol content. It’s purpose is to ensure a safe tune for this quality of fuel. 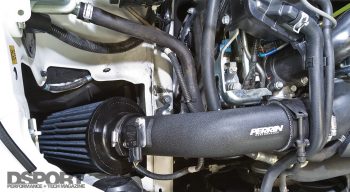 It was now time to test the Perrin Performance CAI. The installation of the intake took about an hour, which included the disassembly and removal of the factory hose and airbox. The CAI mates to the factory hard pipe by way of a silicone hose with clamps, while the MAF sensor takes its place just behind the air filter. Rather than running this intake alone (which could make power by way of a lean air-fuel condition), we loaded a Cobb tune optimized for an AEM intake (similar in design to the Perrin unit) and fired up the engine once again. The Perrin intake along with the Cobb tune helped to produce measurable gains, with peak figures checking in at 273.53 horsepower and 284.61 lb-ft torque. The greatest horsepower gain of 25.44 occurred at 5,600 RPM, while the greatest increase in torque production of 34.65 lb-ft occurred at 3,500 RPM. Note that this combination also resulted in a richer air-fuel mixture earlier on. Ratios dropped to between 11.0 and 12.0-to-one as early as 2,700 RPM instead of at 4,000 RPM, as had been noted in the baseline, the exhaust test and the reflash test.

Perrin Performance’s Cold Air Intake for the WRX includes a filter, pipe, silicone coupler and hose clamps. When used in conjunction with the AccessPort reflash for aftermarket intakes, gains were realized across the RPM range. 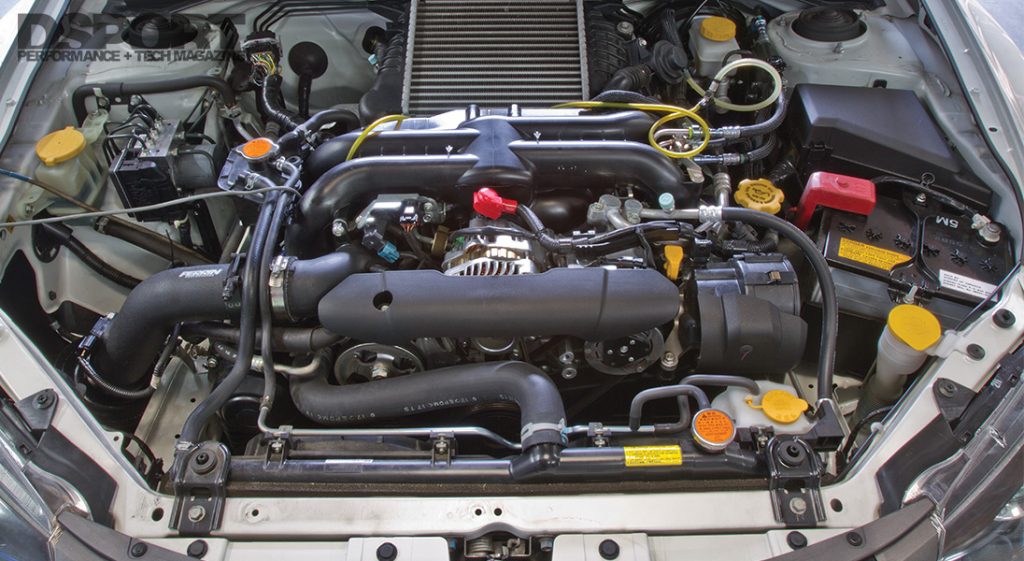 This first Test & Tune featured a time-tested combination of bolt-on parts, the good old intake and exhaust. However, today’s vehicles will not continue to make power without tuning. Fortunately, reflashing the factory ECU with preprogrammed maps proved an effective means of optimizing fuel delivery and ignition timing. These components worked together to increase horsepower by eight percent while richening the air-fuel ratio to safer levels even sooner than the factory ECU tune. In the next Test & Tune with the WRX, we will further reduce exhaust backpressure with a downpipe while increasing air density with a front-mount intercooler. We will also fortify the fuel delivery system with a pump and injectors before retuning and optimizing performance for the increased fuel delivery capacity. Stay tuned.