Before the advent of plug-and-play engine management systems, affordable UEGO sensors, and open-source reflash programs, the number of engine management “tuners” were limited. Before plug-and-play, a stand-alone system required hours for proper installation of the flying-lead harness. The complexity of the install deterred many from learning the skills necessary for proper engine calibration. Until just a few years ago, the UEGO systems to read air-fuel ratios were also quite expensive. In the 90s, the Horiba unit that delivered the best performance would take $10,000 out of your wallet. As for being able to recalibrate your factory ECU, the open-source and other options simply didn’t exist. Today, these roadblocks no longer exist. Plug-n-play engine management systems have cut installation time down from days and hours, to hours and minutes. A number of aftermarket solutions also allow the OEM ECU to be recalibrated. With quality UEGO/Wideband systems retailing for under $300, nearly anyone can afford to outfit a vehicle to provide monitoring of air-fuel ratios. Today, finding someone that claims they know how to tune your ECU is easier than ever. However, finding someone that actually knows how to tune isn’t so easy. 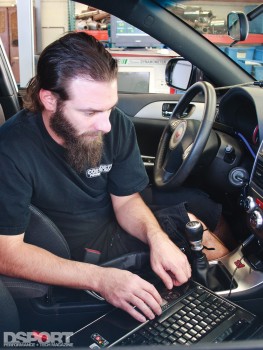 When it comes to open-source and the like tuners that reflash factory ECUs, it’s not uncommon to find an individual that is an exceptional cracker and hacker that can find some, most or all of the factory fuel and ignition maps in the ECU. Unfortunately, while many of these types can access some or all of the correct data, most have zero training or knowledge of the dynamics of engine tuning.

Rich and retarded. Many times, this group of “tuners” relies upon excessively rich air-fuel ratios and extremely-conservative spark advance to provide a “safe” tune on the engine. Unfortunately, going excessively rich and retarded can cause excessive EGT temperatures that cause cracking of exhaust manifolds. The rich ratios can also completely wash down the cylinder walls, causing excessive cylinder and ring wear.

Today’s better category of tuners falls under the AFK banner. These tuners set realistic A/F ratios and generally run as much ignition timing advance as possible before knock occurs. With a mastery of the interface program, these tuners are able to hit their target air-fuel ratios. For the most part, the most-talented AFK tuners get the engine to within 75-to-80-percent of where it would be ideally calibrated.

The epitome of engine calibration tuners fall under the “calibrator” category. With a true understanding of engine dynamics, these tuners can determine which A/F ratios are best at each load and engine speed to provide optimum power, reliability and efficiency. Ignition timing would also be optimized to a level where the least amount of ignition timing advance is utilized to produce peak torque figures. With many of today’s higher-octane racing fuels, it’s possible to over-advance the timing beyond this point before encountering knock. As a result, torque and power will not be optimized and the resistance to knock threshold will be limited. 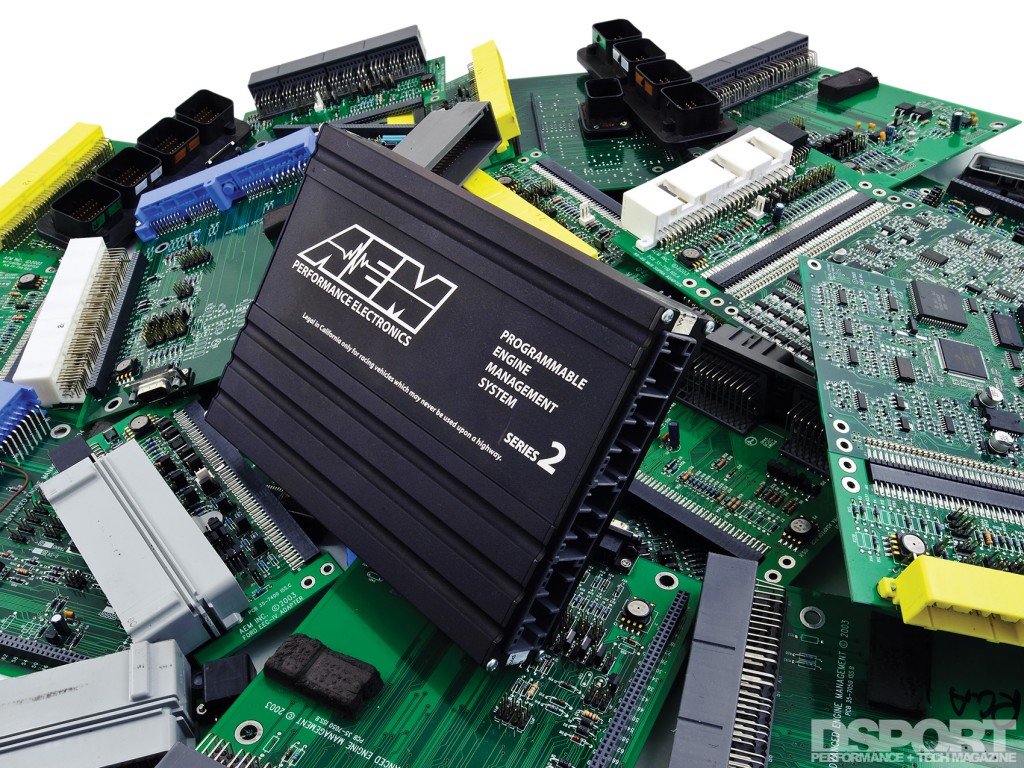 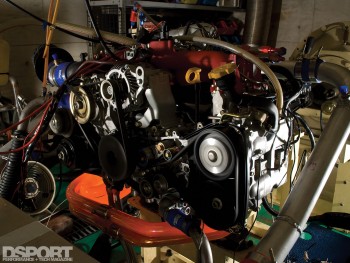 The more you know, the better the results. In tuning an engine, it’s critical to know the power/torque output, the air-fuel ratio, the exhaust gas temperatures and the knock count. “Street tuning” an engine doesn’t provide the power/torque data that a chassis or engine dyno is able to provide. Hence, no street-tuned engine is ever truly optimized.

Every engine will have its own character. A number of design factors will influence how well the engine ingests air, how effective the injection system atomizes the fuel, the in-cylinder mixing of the air and fuel during the compression stroke, the “ignite-ability” and burn rate of the air-fuel mixture and the ability of the engine to turn the combustion into energy. To further complicate matters, all of the critical measurements are functions of each other. Power output is a function of air-fuel ratio and ignition advance. Air- fuel ratio and ignition advance will also influence EGT and knock count.

For an engine to be thoroughly calibrated or “tuned”, its efficiency should be optimized at all engine speeds. The A/F and ignition timing settings that deliver the maximum torque at a specific RPM with the minimal amount of fuel will indicate that the engine is at peak efficiency at this engine speed. Hence, you may be able to see 200 horsepower from a particular engine at 6,000 RPM at a variety of ignition timing and A/F ratios. However, the combination of A/F ratio and ignition timing that minimizes injector duty cycle and EGTs (for a given combustion temperature) will indicate that the least amount of excess fuel was added and that combustion was initiated at the proper timing so that the power stroke used up the maximum amount of energy in the cylinder (resulting in less energy/temperature in the exhaust gas). Slightly richening the A/F ratio a half-point richer than the Leanest for Best Torque (LBT) is a good practice to provide a safety margin.

In general, the ignition timing will need to be set at the minimum amount of advance to achieve peak torque (a.k.a. MBT, or minimum for best torque). As for the EGT levels, both ignition timing and A/F ratios will affect the combustion temperatures and EGTs. All other factors being equal, ignition spark timing that’s too advanced will cause the combustion to occur when the piston is still traveling upward or while the piston is dwelling at TDC. Assuming knock (detonation) doesn’t occur at this timing setting, power may drop. When ignition occurs too late (timing too retarded), the peak cylinder pressures occur too late to be optimized by the rotating assembly. As a result, power also tends to drop off while EGTs tend to rise as much of the energy from combustion goes out the exhaust pipe and through the engine’s cooling system (usually resulting in higher coolant temps too). 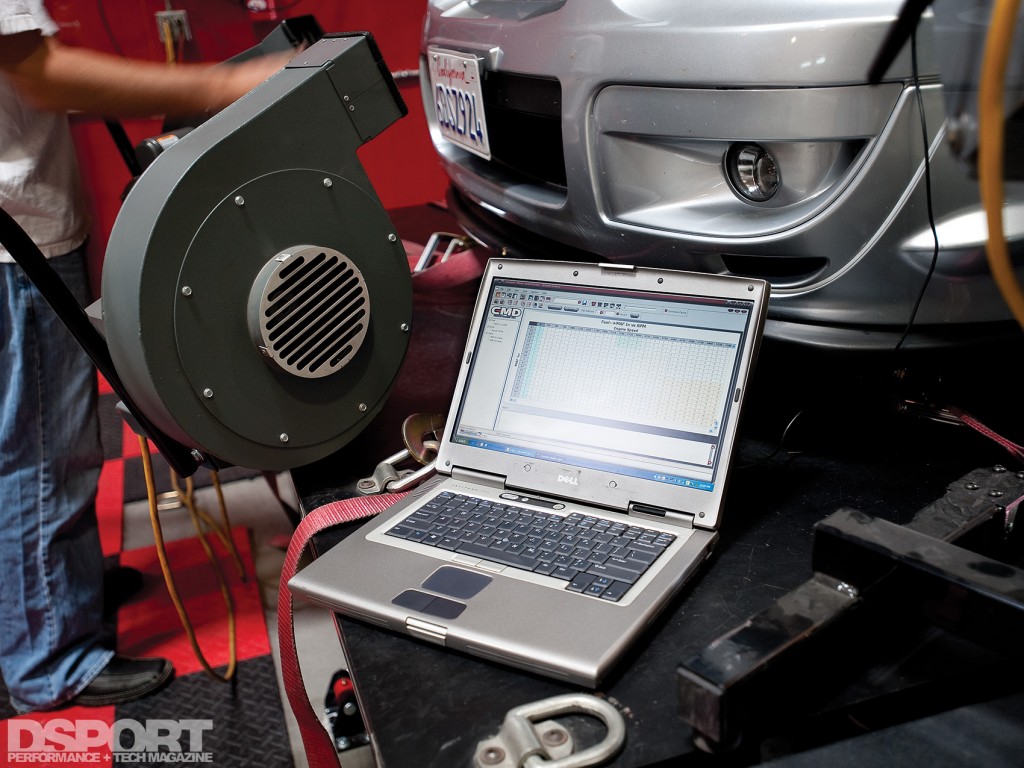 No two cylinders are alike in most engines. Manifold designs, variances in compression ratio, port-flow variations and difference in cylinder-to-cylinder cooling can make each cylinder perform differently. As a result, the knock limit of the poorest performing cylinder dictates the engine’s overall ignition timing. When you think about it, unless you are sure that each cylinder is at the same exact A/F ratio (only possible with a multi-channel UEGO system), an engine is always being tuned to its worst performing cylinder. Fortunately, AEM has just introduced a 4-channel UEGO system that also incorporates back-pressure compensation so that the sensors can be installed upstream of the turbocharger. We look forward to using this system in the near future to optimize some calibrations. 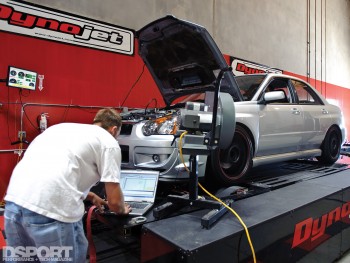 Just like having a scalpel doesn’t make you a surgeon, having access to engine-tuning equipment doesn’t make one a “tuner.” There is no replacement for experience so it’s best to do your homework before dropping your car off to someone for tuning. Thousands of your dollars spent planning and preparing the ultimate engine can disappear quickly if your engine tuner lacks the experience and knowledge to tune properly.

When an engine is calibrated for peak efficiency, power output and reliability, only then is it truly tuned. During this process, it’s entirely likely to find that the ideal A/F ratios will not be the same at all engine speeds. The LBT and MBT thresholds for the engine at different engine speeds will help to optimize the engine. Taking the tuning to the cylinder-to-cylinder level can increase both power output and reliability and will make the most of your blueprinted engine build.