You are at:Home»The Tech»Education»Twin Scroll vs. Single Scroll Turbo Test | The Great Divide

On turbocharged engines, it’s been said, “If you want more power, you need to be willing to sacrifice some boost response.” Today, that’s actually seldom true. While you may be among the two-percent that have the best response turbocharger and turbo manifold for your engine combination, chances are that your current turbo and exhaust manifold do not feature all of the latest performance technologies. Ball-bearing center sections, bleeding-edge compressor and turbine wheel designs and surge-resistant compressor covers are just a few of the newer technologies that are allowing big-power turbos to have improved boost response. While exotic turbine materials, improved ball-bearing designs and new compressor make headlines, a twin scroll (a.k.a. divided-inlet) turbine housing paired with a properly-engineered turbo manifold may deliver a bigger improvement in boost response than a number of the other technologies combined. After reviewing the history and science behind twin scroll technology, we’ll show the real world differences of a single- versus twin scroll configuration on our Project KA turbocharged 240SX.

In the early days of performance turbocharging, carburetors and non-computerized ignition systems were the norm. These low-tech devices never allowed the optimization of fuel delivery and ignition timing. Instead, simply getting an engine to survive a trip into boost was an accomplishment. In those days, a great tune was something that allowed your engine to not melt down at 8psi of boost. Despite the lack of supporting technologies 30 years ago, someone considering turbocharging would still need to answer the “open” or “divided” inlet question when choosing a turbo (this was the common terminology before single- and twin scroll became popular). Hence, “twin-scroll” is not a new technology. Instead, it was more of a forgotten technology that is quickly becoming the norm for all OEM applications and record-setting racecars. 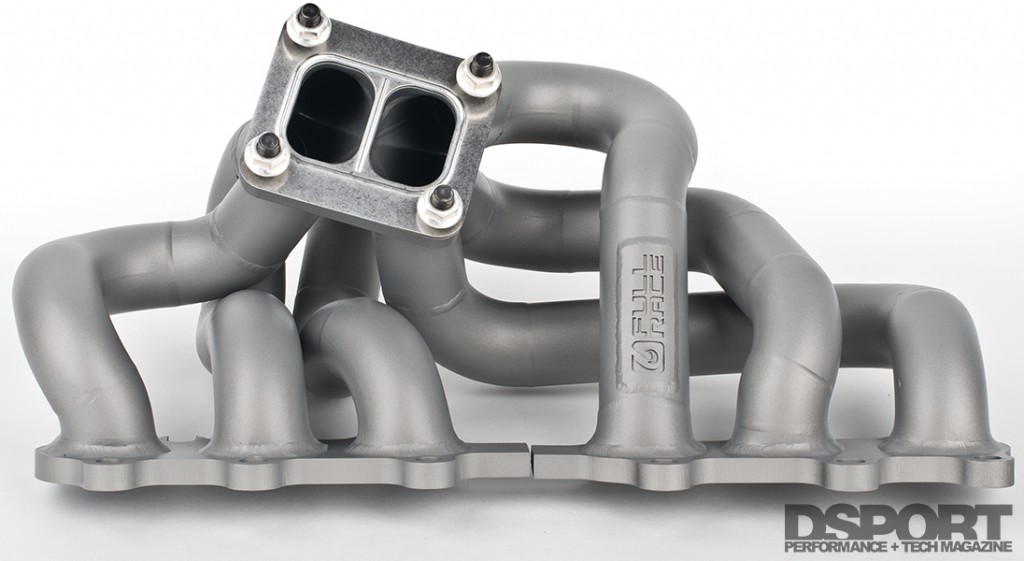 It’s only in the last 10 years that we’ve entered into our current era of “Modern Boost.” Now the supporting engine management technologies allow for a particular engine/turbocharger combination to be fully exploited. Both OEM and aftermarket engine management systems allow the fuel, boost and ignition curves to be optimized under a variety of load and throttle conditions. Boost response and power output can now be optimized to the limits of the particular engine/turbocharger combination. When selecting an upgraded turbocharger or complete new turbocharger system, the question of single- or twin-scroll must be answered. 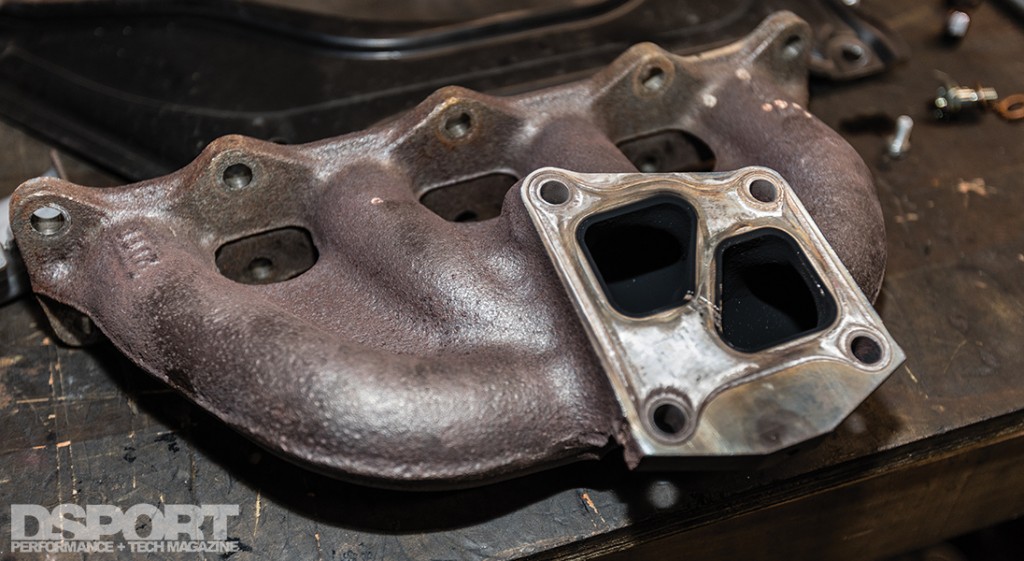 In addition to pairing the correct cylinders, a well-engineered twin-scroll exhaust manifold should also have equal length runners with a like number of bends. Proper matching of the dimensions and shape of the turbine flange on the manifold to the turbine inlet of the twin-scroll turbo is also important. 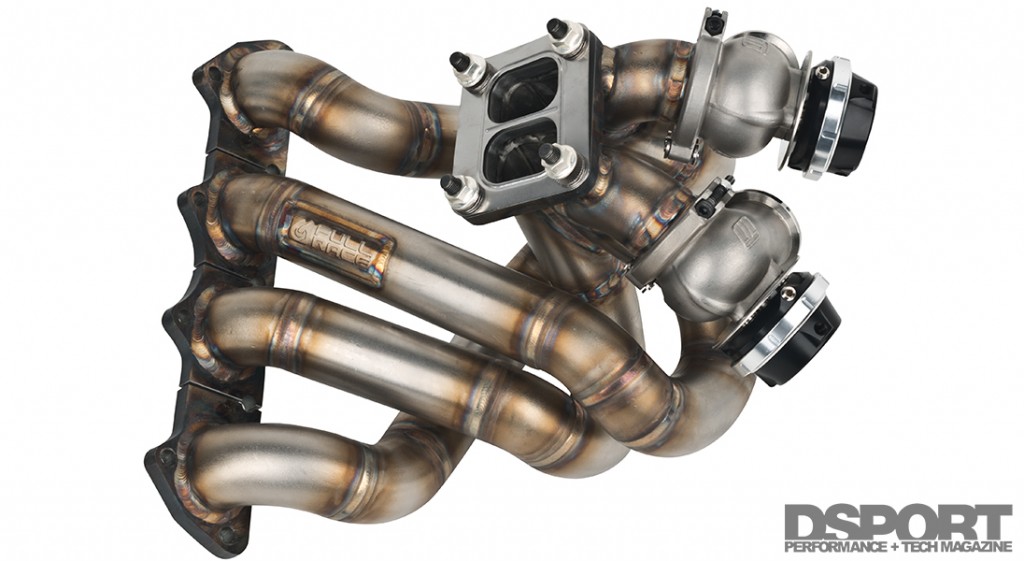 For best performance with external wastegates, two wastegates (one per scroll) are used instead of a Y-pipe on a twin-scroll system.

The crankshaft must rotate 720 degrees or two full rotations for every cylinder in the engine to experience all four cycles (intake, compression, power and exhaust). This is true whether we are talking about a 4-cylinder or 12-cylinder engine. In a 4-cylinder engine, four cylinders will complete the cycle in 720 degrees of crank rotation while 12 cylinders will complete all four cycles in the same 720 degrees of crank rotation. With more cylinders, the amount of crankshaft rotation in degrees between the like cycles on each cylinder will be less.

On a 4-cylinder, a power stroke occurs every 180 degrees of crankshaft rotation in a different cylinder. The same is true for the intake, compression and exhaust strokes. On a 6-cylinder, more events need to happen during the same two crank revolutions. The result is that all like events between cylinders are spaced 120 degrees. For an 8-cylinder, the spacing is 90 degrees, while a 12-cylinder has a like event occurring in the next cylinder every 60 degrees.

So why does the number of degrees between events matter? If you have ever spent time around performance camshafts, you may remember the duration figures. Cams may sport an advertised duration between 256 and 312 degrees or more. Let’s assume our engine combination has a camshaft with 280 degrees of intake and exhaust duration.

Cylinder #1 had just evacuated it’s exhaust gasses and it’s in the process of closing its exhaust valves while the #1 intake valves are also in the process of opening to begin the intake stroke. Unfortunately, cylinder #3 is opening its exhaust valves and releasing high-energy exhaust gasses. While the large percentage of the energy and pressure from cylinder #3 are being used to drive the turbine, a smaller percentage is looking for an easy way out (the path of least resistance). When the pressure is lower going back through cylinder #1’s open exhaust valve than it is at the open/ non-divided inlet of the turbine, exhaust gas from cylinder #3 will circulate back into cylinder #1. Since cylinder #1 is trying to begin an intake stroke, some of the intake charge gets diluted by exhaust. A diluted charge robs power that could have been realized without the dilution. Eventually, the #1 exhaust valve is completely closed while the #3 piston ascends up the bore. Exhaust is coming from the #3 exhaust valves during the process until the #3 cylinder runs into the same issue as cylinder #1 when cylinder #2 begins to open its exhaust valve. Confusing? You bet. The problem is even more of an issue on 6- and 8-cylinder engines when cylinder-to-cylinder exhaust events are occurring at intervals of 120 degrees or 90 degrees, respectively. In these instances, there is even more time that the exhaust valves in two different cylinders are simultaneously open.

Since you can’t change the number of cylinders in the engine, how can you increase the spacing between like cycle events in an engine? One way is to add turbochargers. When two turbochargers are used on a six- or eight-cylinder engine, cylinders can be paired to feed each turbo in such as manner as to double the amount of duration between like exhaust valve events. We run a pair of turbochargers on our RB26 in our Project RH8 R33 GT-R. Cylinders #1, #2 and #3 feed the front turbo while cylinders #4, #5 and #6 feed the rear turbo. Because there are no cylinders that fire in sequence paired to the same turbine, the amount of time between exhaust valve events that will happen on cylinders feeding the same turbine has doubled. Instead of having only 120 degrees, there is now 240 degrees. 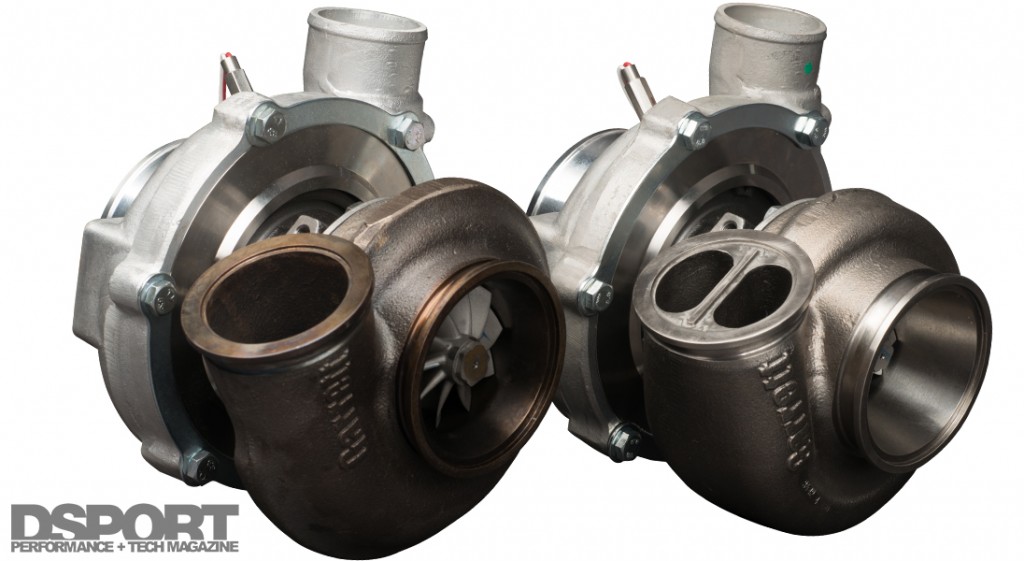 While theories are great, it’s real-world results that improve performance. As you may recall, we used a custom Wisecraft Fabrication twin-scroll exhaust manifold and Garrett twin-scroll turbo on our Project KA 240SX. Running on E85, this KA24DET engine can make just under 700 horsepower to the wheels. Our test will change only one component, the turbine housing. We will test with both a single-scroll (“open” or “non-divided) turbine housing and a twin-scroll (divided inlet) turbine housing of the same A/R ratio. In addition to recording the changes in the power and torque curves, we will also be taking a look at the responsiveness of the two combinations. To compare responsiveness, we decided upon looking at the time it takes to reach a certain engine speed, as well as, the time it takes to reach a certain boost level during a third gear pull initiated at the same start condition. We chose third gear as this is the gear most likely to be used for passing. 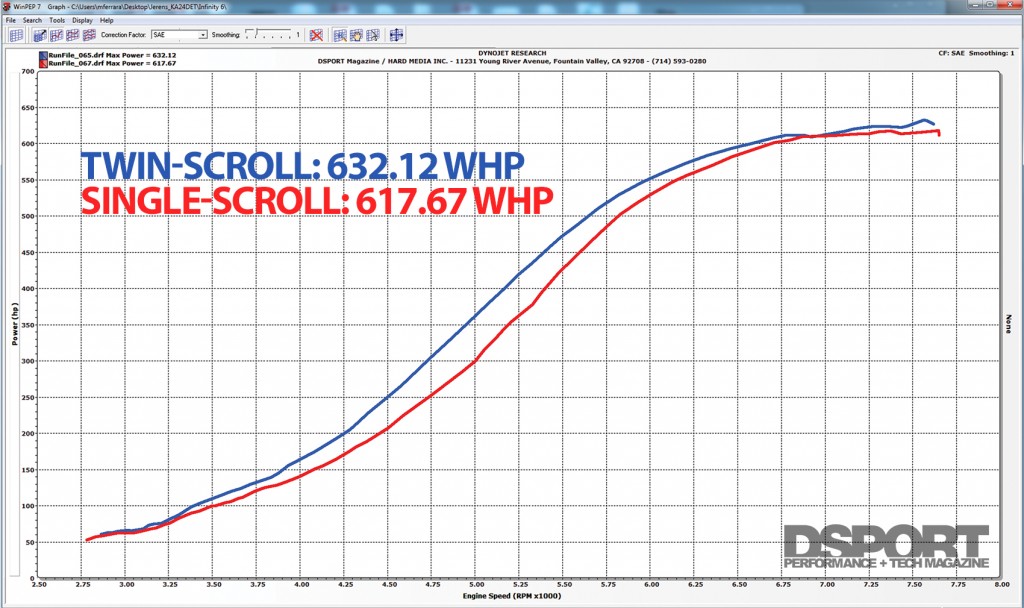 More power everywhere! The twin- scroll allowed for boost pressure to be higher at lower engine speeds. Over 20-percent more power was realized between 4,500 and 5,000 RPM.

While both power graphs crossed at 7,000 RPM, the twin-scroll proved to continue to climb at a faster rate than the single-scroll up to the 7,600 RPM redline. In the end, there was an additional 10.7 horsepower and 7.5 lb-ft of torque at 7,500 RPM with the twin-scroll. 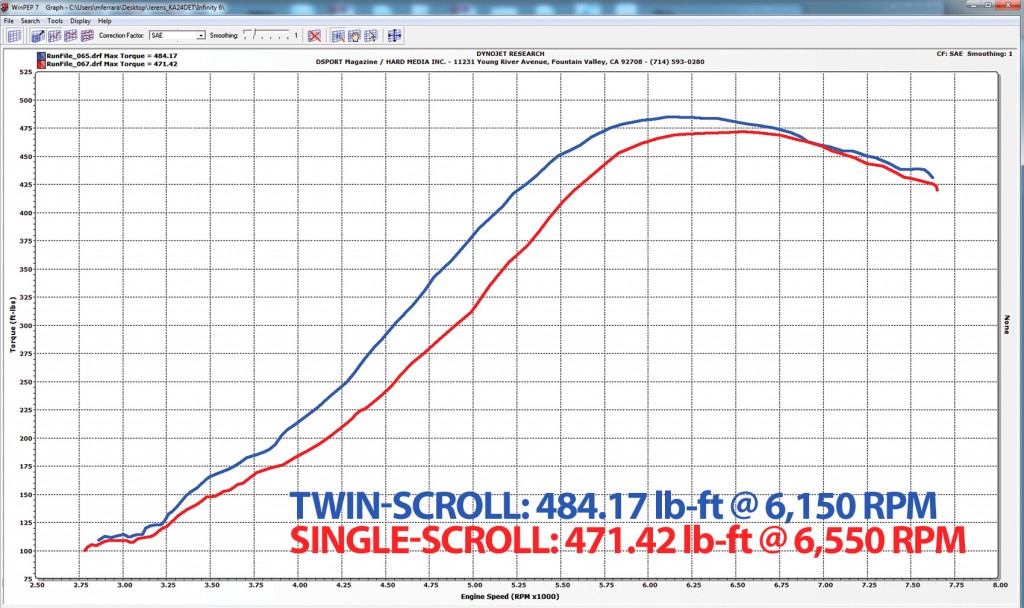 More torque everywhere! It was the same story with the torque curve that we witnessed in the power curve. We’d expect to see a similar boost in performance from an increase in displacement (2.4-liter to 2.7+ liters).

It seems that nearly every forum fixates on the differences in engine speed to reach a certain boost level when comparing the response of different turbos. While it is one way to compare, it can be very misleading. So in addition to this metric, we also logged the time it took for the engine to accelerate to a certain RPM in both configurations. This would also be equivalent to the time it took to reach a certain vehicle speed in a comparison.

We explored two speed ranges for our comparison. For range #1, we took at look at the 45-80 MPH (3,100-5,600 RPM) acceleration. In this range, the single scroll setup took 3.42 seconds to reach 80 MPH from 45 MPH. The twin-scroll managed the same feat in just 2.93 seconds (0.49 seconds faster). That would be a difference of nearly 3.0 car lengths. When the single-scroll setup finally reached 80 MPH, the twin-scroll would be three car lengths ahead and already above 95 MPH.

The amount of time to reach the same boost target was roughly 0.6-second slower with the single-scroll versus the twin-scroll system. In looking at the “forum favorite” engine speed (RPM)-to-reach peak boost, there is a 400 RPM difference (5,100 versus 5,500 RPM for 30psi of boost pressure). While that 400 RPM difference may not sound like a lot, a 60-100 MPH passing exercise will leave a single-scroll setup a car length behind the twin scroll.

While we conducted the testing on an 2.4-liter Nissan engine equipped with a Wisecraft Fabrication exhaust manifold and Garrett GTX turbochargers, Full Race Motorsports experience similar results on a 2.3-liter Ford EcoBoost engine equipped with a BorgWarner EFR turbo. In the Full Race Motorsports testing, they went so far as running a computer simulation to predict the velocity of the exhaust flow in each runner with both a single and twin-scroll configuration. In this computer model, the average velocities in each runner were within 4-percent of each other on the twin- scroll setup. On the single-scroll, the differences were are high as 15-percent from runner to runner. The improvement in consistency in velocity profiles in the twin-scroll configuration predicted that the twin scroll eliminated mixing losses and maximized pulse energy to the turbine wheel. 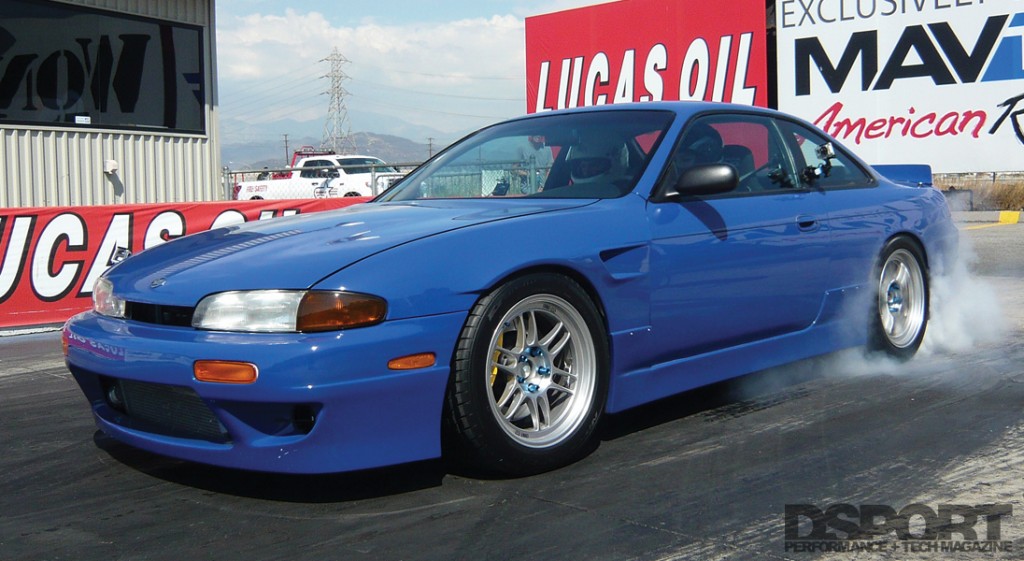 The overlap of exhaust valve events between sequentially firing cylinders reduces engine performance and boost response. Twin-scroll turbocharger systems can either completely eliminate or substantially reduce this overlap period. When this overlap period is reduced or eliminated, the engine experiences less pumping losses and a reduced intake charge dilution for increased performance and efficiency.

With the twin-scroll turbo system, the engine is also less sensitive to the ill effects of long-duration camshafts. A twin-scroll turbo system is simply a better mouse trap than a single-scroll. Having quicker torque delivery when the driver needs it not only increases performance, but it also adds fun. Be sure to stay tuned and subscribe as we plan to show how the A/R of the turbine section affects performance.