Imagine a world without boost. High-performance street engines would make around 100 horsepower per liter. Racing engines would only be able to squeeze out 130 horsepower per liter. In this boost-free world, a five- hundred horsepower streetcar would need an engine that is over five liters in displacement. Heavy, large- displacement engines would be the only option for making big power. Fortunately, we don’t live in an all-motor world. Serious specific output can be realized from an engine when turbocharging or supercharging is utilized.

Paul Nelson purchased this 2005 EVO VIII with the intent of building an 11-second streetcar. In this process of reaching this initial goal, Paul discovered an insatiable appetite for speed. After reaching the target of 11s, the bar was set to build a 1000-horsepower, 9-second EVO. On September 1st, 2007, this EVO reached its goal with a 9.43-second blast that reached 157.5mph.

A well-built turbocharged engine can generate 250 horsepower per liter on pump gas or over 500 horsepower per liter on high-octane race gas. For this 2.0-liter 4G63 to generate this level of power a strong foundation was a must. To form this foundation, a race-prepped factory crankshaft was teamed with Gruden aluminum connecting rods and 8.7-to-1 forged pistons. The rotating assembly was placed into 4G63 block after the bores and deck were prepped for the .020-inch oversized pistons and copper o-rings. English Racing assembled the shortblock and then turns its attention to the top-end of the engine. 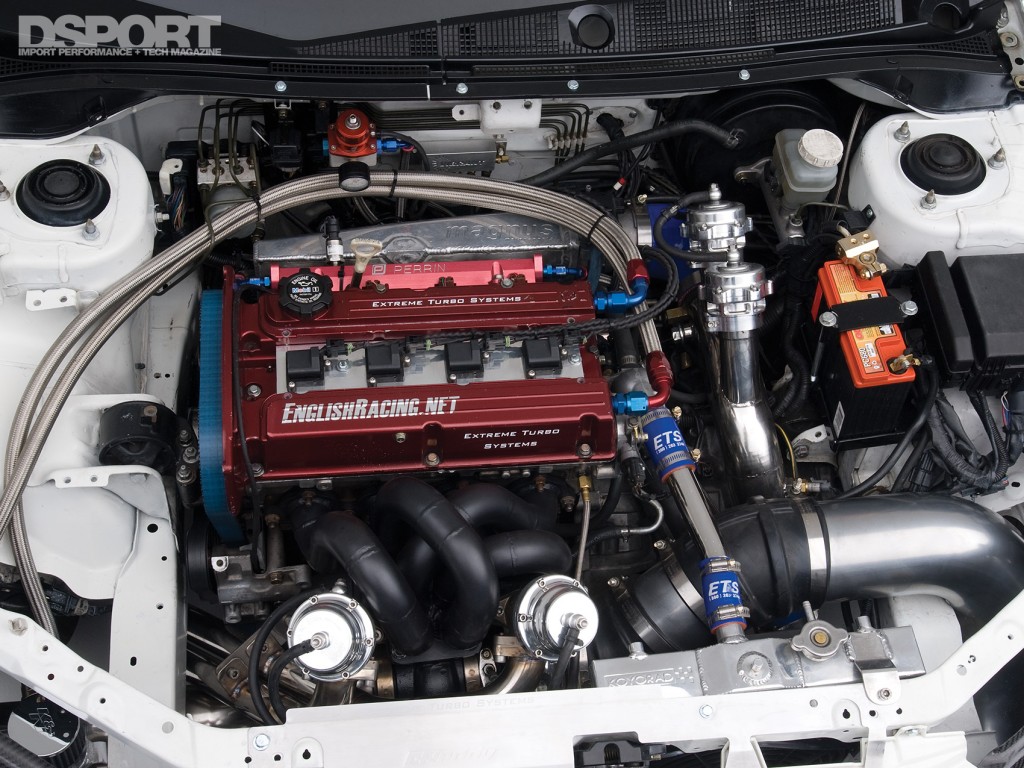 Oversized (+1mm) Ferrea stainless-steel intake and exhaust valves seated in the cylinder head after English Racing massaged the ports and combustion chambers. To keep the valvetrain together at 10,000rpm, Supertech dual valve springs and titanium retainers were chosen. The spring, valve and keeper combination was set to provide the proper seat pressure for the GSC S2 performance camshafts. Once the cylinder head modifications were complete, the head was mated to the short black with a combination of ARP L19-alloy head studs, copper o-rings and a factory head gasket. The L19-alloy studs allow for the higher holding power needed for the extreme horsepower output per cylinder. With a higher clamp load setting, the likelihood of the head lifting from the block is reduced. The combination of copper o-rings and factory head gasket ensure that combustion pressure stays in the cylinder while the coolant and oil channels remained sealed up.

While the engine itself must be physically strong enough to handle the power being generated, the turbocharger, intercooler and fuel systems must have the capacity needed to provide enough air and fuel to generate over 1,000 horsepower at the wheels. In the case of this 2.0- liter engine, boost pressures reach a frightening 55psi to generate the big numbers on the dyno. The turbocharger system consists of a Extreme Turbo Systems (ETS) twin- scroll tubular exhaust manifold that feeds a massive Garrett GT42R turbocharger. Once the desired boost levels are reached, a pair of TiAL 38mm external wastegates vent some of the pre-turbo exhaust flow to the atmosphere. The bulk of the exhaust gases travel through the turbine section en route to the side- exit exhaust in the front bumper. While the hot side of the turbocharger uses the exhaust power to drive the common shaft, the cold-side (compressor side) of the turbocharger ingests and pressurizes the intake charge that’s sent to the massive ETS 5-inch intercooler core. Once the airflow reaches the intercooler, the core rejects the majority of the heat created during the pressurizing process to the atmosphere while sending the chilled air charge through the charge pipe leading to the throttle body. An Infiniti Q45 90mm throttle body regulates the airflow into the Magnus Motorsports sheet-metal intake manifold. With a serious amount of air being fed into each cylinder, a serious amount of fuel must also be injected. To accomplish this task, an Aeromotive fuel pump feeds a set of four 1,600cc/min injectors under the control of an AEM EMS engine management system. By reading the manifold air pressure signals from an AEM 5-bar MAP sensor and by taking all of the information provided by the factory sensors, the custom- tuned AEM EMS is able to provide the appropriate amount of fuel to achieve the desired air-fuel ratios. In addition to this task, the AEM EMS also orchestrated the triggering of the ignition events. The ignition itself is made up of a two-channel CDI M&W Pro-12 ignition box that provides a high-voltage supply to the 300M coils on each of the NGK Racing spark plugs.