Like a fine spirit, refining your ride sometimes requires progressive improvement over time. This distillation process often results in parts upgrades and retuning as limitations are discovered and more horsepower is desired. Finding the performance limitations of engine and power adding components is a part of this process, and Michael Tucker knows this process well.

Like many enthusiasts, Tucker was affected by the soaring notoriety that the automotive lifestyle achieved as a result of The Fast and the Furious movie franchise. He recalled, “I had owned several 3000GT VR4s and had acquired a taste for the larger displacement, Japanese coupes. Unfortunately, once I realized the Supra’s potential, I was not able to justify buying one because its popularity soared after the movie came out, as did its pricing. Eleven years later, I finally found a clean chassis that was gently modified and reasonably priced.”

Tucker was a firm believer in maintaining the streetability of his vehicles. After all, what’s the point of building up a quick ride when you can’t enjoy it anywhere but on the track? He shared an insightful perspective, “Most car enthusiasts don’t start a vehicle build expecting to swing from the fences, and I was no different. There are always concerns about a high-horsepower Supra losing its street manners and I must admit, there is some truth to that. I heard a joke that sums it up, ‘What do a 600 horsepower Supra and a 1,200 horsepower Supra on street tires have in common? They both run twelves.’ 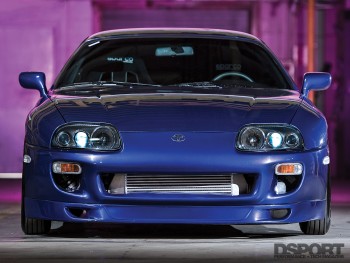 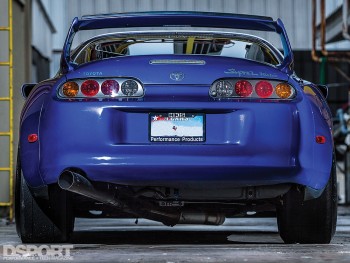 Initially, he wanted to avoid unnecessary changes or modifications to the engine internals, so Tucker started with bolt-on upgrades and tuning. Working with JMS Racing, they decided on a conservative, single Garrett GT4294 turbo setup. He had not planned to build an engine, since the 2JZ-GTE has proven capable of producing 1,000 horsepower with stock internals, and he didn’t think he’d need much more than that for a streetcar. He decided on a Garrett GT4294 turbocharger, a set of off the shelf cams, a modest fuel system upgrade and as many bolt ons as he could buy. The Supra produced 760 horsepower, was responsive and held its own at the track. 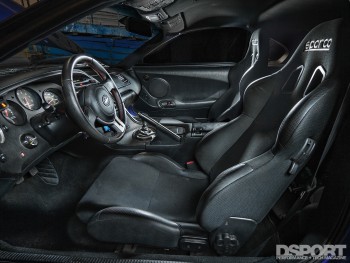 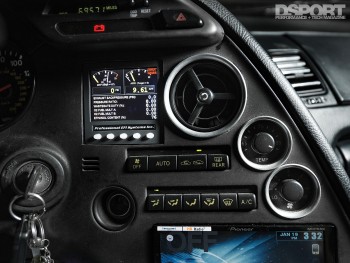 With each successive improvement, Tucker acclimated to the 2JZ’s output and soon found the performance threshold for various parts. He sought improvements as each shortcoming was identified. Targeting the stock engine’s peak performance capacity, he upgraded the GT4294 with a Forced Performance FP4205R turbocharger. Once installed, the Supra returned to the dyno for calibration. With the boost dialed up to 30 psi, the engine produced nearly 200 additional horsepower, now checking in with 950 horsepower to the wheels as measured on JMS Racing’s Dynojet 424x LINX AWD dynamometer. Maxed out on its current setup, it was time to shake the Supra down and quantify its performance at their local drag strip. After several passes, this Supra’s best time slip was a 10.6 at 156 mph.

At this point, the car ran great, but the original paint was somewhat of an eyesore. The shop removed the engine and transmission before having the body sprayed Royal Sapphire Pearl, a factory hue available only on ‘97-‘98 Supras. While the shell was being treated to a new skin, they decided to capitalize on the opportunity to rebuild the powertrain since it had already been removed from the body. 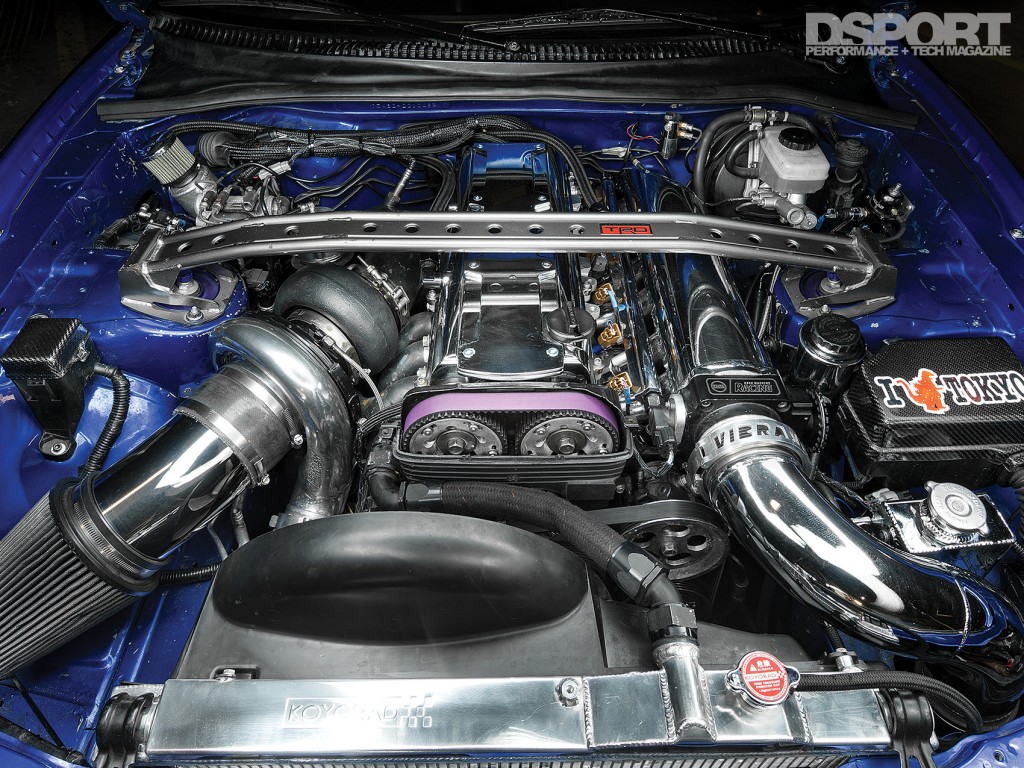 Having reached the stock engine’s peak output threshold, Tucker decided to fortify the engine in preparation for greater output. JMS Racing overbored the iron cylinders of the 2JZ before slugging the block with 10.0-to-1 compression JE Pistons. 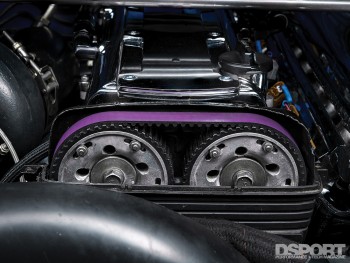 The pistons make the connection to the factory crankshaft by way of a set of JMS-spec aluminum connecting rods. To keep the crank rotating on its axis under greater cylinder pressures, the block was machined to accept a set of Titan Motorsports billet steel main caps. These caps were line honed in the block prior to final assembly with a fresh set of bearings.

Moving on from the shortblock, JMS Racing ported the cylinder head before upgrading the valvetrain with a complete setup from Ferrea. To lift the new valves, a pair of Titan 272-degree camshafts takes its place within the head. With the longblock components prepped for reassembly, a set of ARP Custom Aged 625 head studs secure the head to the block while a factory head gasket ensures a leak-free seal. 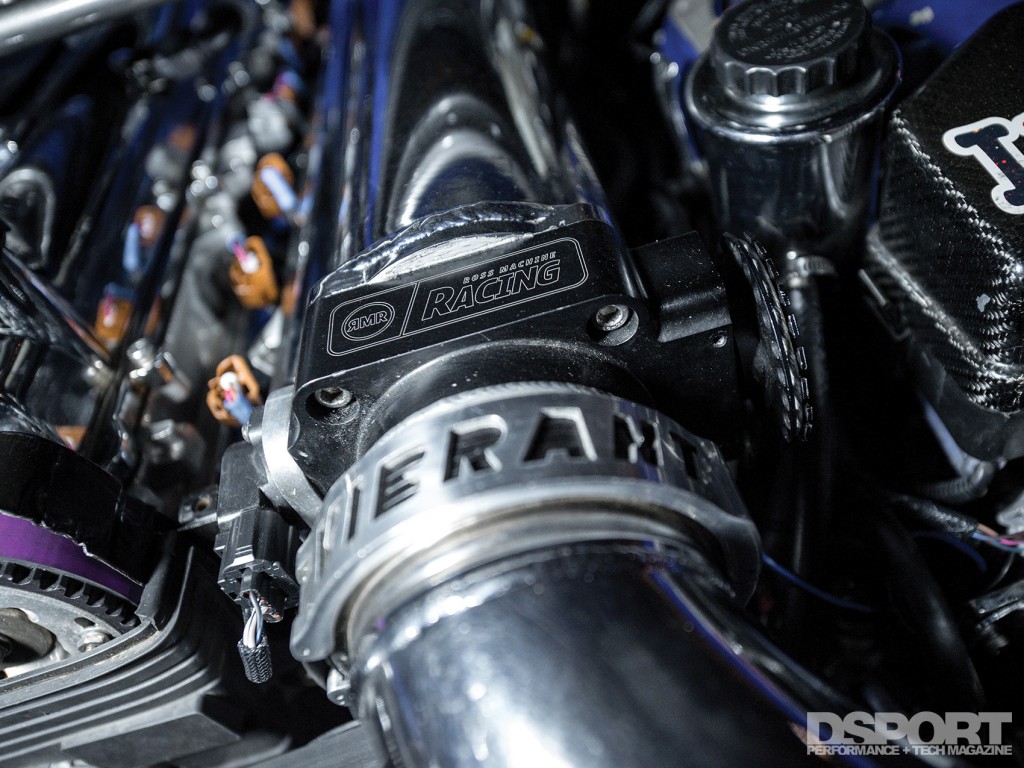 Attention then shifted away from the engine and focused on the transmission. While the factory Getrag V160 six- speed transmission offers tremendous torque transfer capacity, it’s not unbreakable. Thus the venerable transmission received a refresh complete with new synchros. To efficiently transfer power from the 2JZ to the V160, an RPS Triple Carbon Clutch bolted to the crankshaft spins the input shaft of the transmission. Once assembled, it was time to reunite the driveline with the chassis. 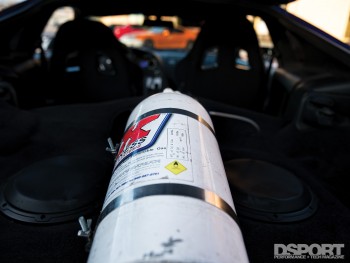 (L) Inside the ashtray, a carbon-fiber switch panel discreetly positions the line-lock and the controls for the (R) single Nitrous Express bottle.

For race gas performance from the pump for premium unleaded pricing, the shift to E85 makes sense. However, travel range is reduced since nearly 40 percent more fuel is required when using E85. To accommodate the increased volume demands for proper tuning, the fuel delivery system now benefits from a Weldon 2345A fuel pump and -10AN fuel feed lines up to the rail. To regulate the flow of fuel into the cylinders, Jorge Ramos of JMS Racing calibrated the ProEFI 128 engine management system controlling the six-pack of Injector Dynamics ID2000 injectors. With the FP4205R turbo boosting 45 psi, the Supra generated 200 additional horsepower, now putting down 1,150 ponies to the rollers. To restore some of the response, a Nitrous Express 150 shot nitrous injection kit assists with spool up and increased peak output to 1,217 horsepower.

Is it possible to have too much of a good thing, like speed or horsepower? Perhaps, as Tucker might have been contented with a 1,217 horsepower Supra. But, he also has an 800 whp Audi R8, a 1,285 whp twin- turbo Corvette Z06, a twin-turbo V12 Mercedes S Class, an R35 GT-R and an MV Agusta F4 motorcycle in his stable. He could not bear the thought of the Supra wallowing in the shadow of his Z06, and thus pressed for more power. JMS Racing obliged, upgrading the 2JZ with its latest T4 exhaust manifold and a Precision Turbo & Engine PT8285 turbocharger. At 46-psi boost pressure and without nitrous oxide, the Supra spun the rollers to the tune of 1,307 horsepower. With the nitrous activated, peak power figures will be in the mid 1,400 horsepower range, according to JMS Racing’s tuner, Jorge Ramos. 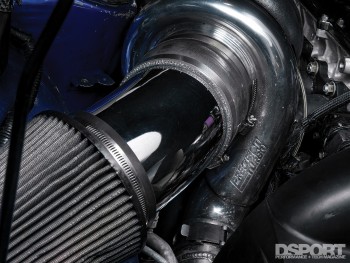 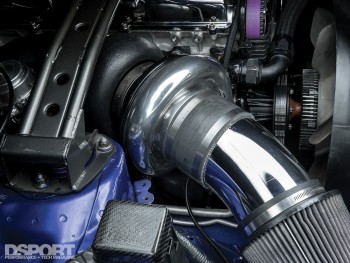 With this setup, Tucker and JMS Racing have their eye set on the 6-speed independent rear suspension record of 7.91 seconds at 188.92 mph that was established in 2009. Making more power under the curve and benefitting from newer technology, they are confident that the record will fall to them. Unfortunately, this effort will take some time since their local track, the San Antonio Raceway recently shut down. Nonetheless, Tucker still drives the Supra to local meets and to car shows. And why not? Like a fine spirit, this Supra was meant to be savored and enjoyed, regardless of the setting. 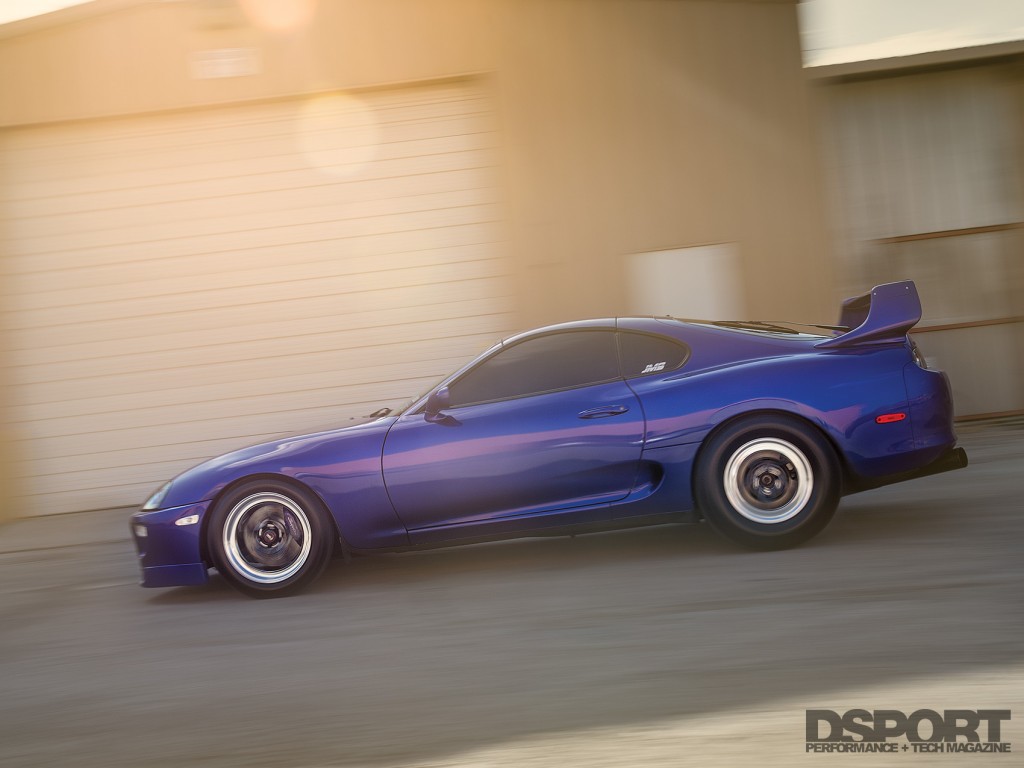