Takahiro Ueno of T&E began competing in Japan’s D1 Grand Prix championship series a decade ago and has impressed fans and enthusiasts alike with his aggressive style. After mastering the fundamentals of keeping a car both sideways and under control in an R32 Skyline, he settled into a long relationship with Toyota Soarers. As of 2009, his D1 machine is a brutal 800-HP 2JZ-powered BMW 3-series, but you will not see him at practice events in his $300,000 Frankenbimmer. Ueno prefers to sharpen his skills and perfect new techniques in something a little more reasonable: this lime-green S14 Silvia which doubles as a practice car and as a demonstration platform for the Vertex Ridge body kit. Text by Ryan Beck. Photos by Dino Dalle Carbonare 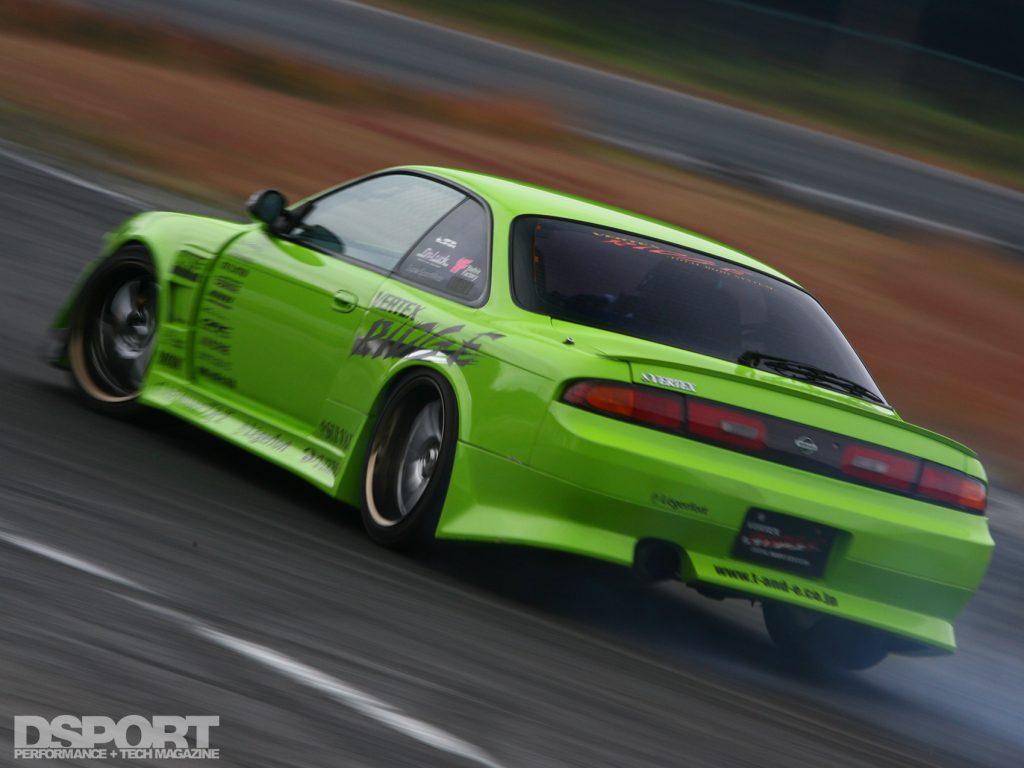 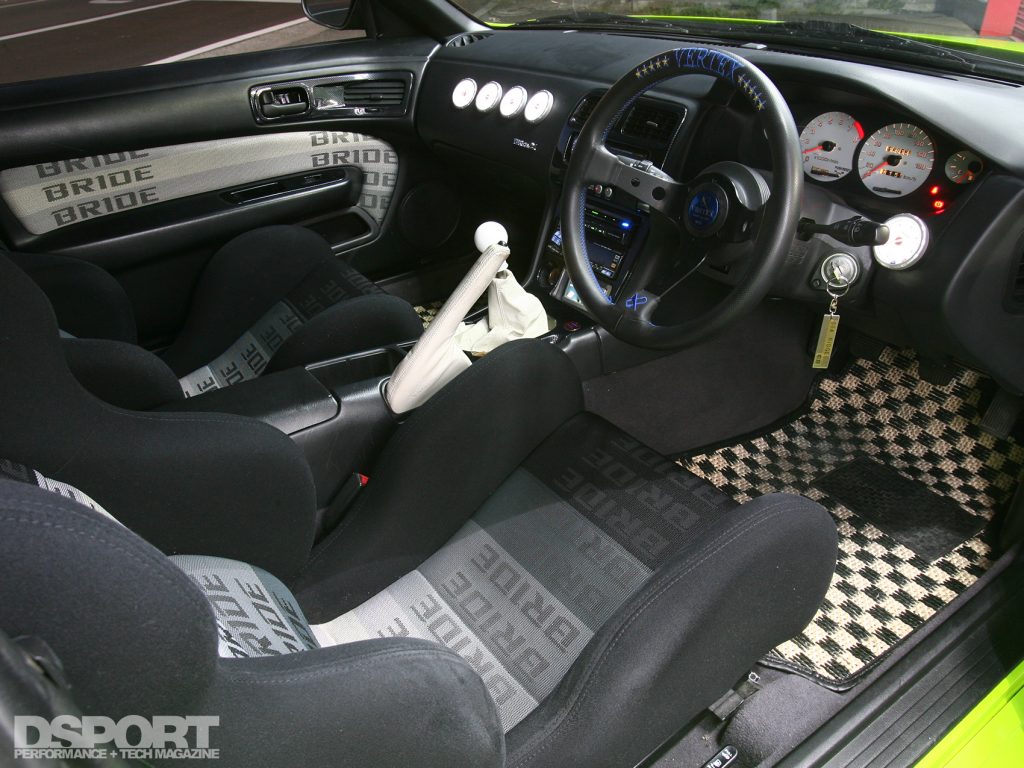 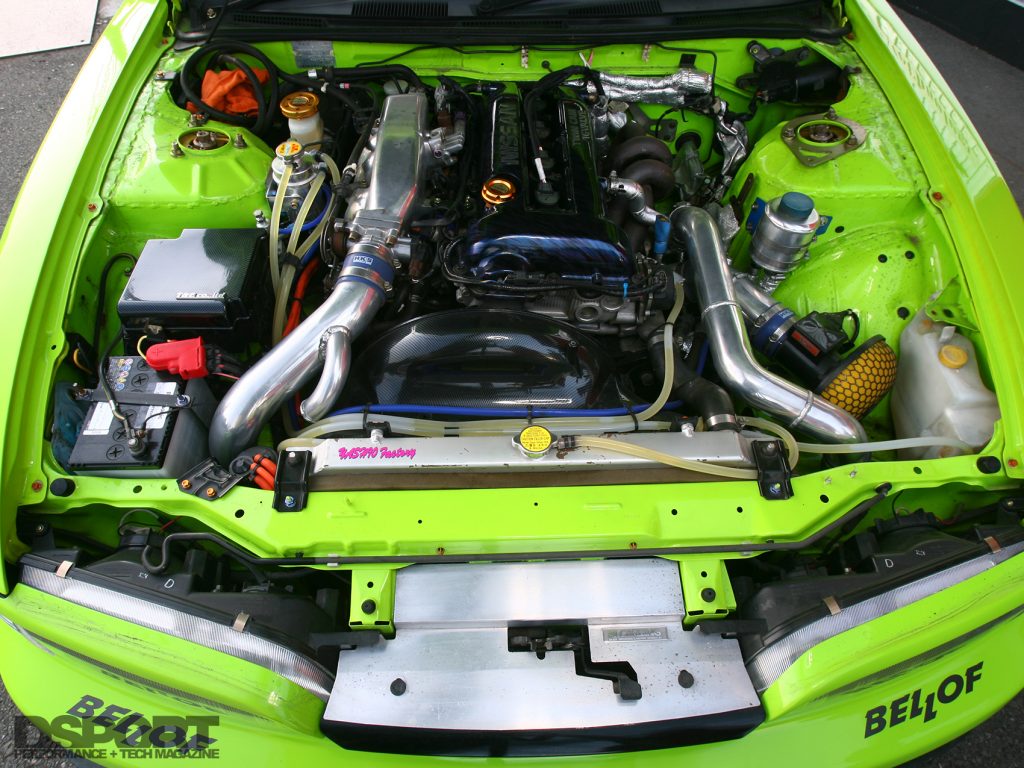 Not far from the T&E main office in Yokohama is Sui:Vax, the special project workshop where T&E develops its cars and products. Hayashi-san is the mad genius behind everything at Sui:Vax including Ueno’s drift practice Silvia. Hayashi-san first focused his attention on the blacktop SR20DET’s bottom- end, rebuilding it with NISMO bearings and a fresh set of Z32 pistons modified to connect to the factory SR20 rods. An HKS 1.2mm metal head gasket provides additional distance between the head and deck surface, effectively lowering compression further. The valvetrain utilizes higher lift and longer duration HKS camshafts to extract maximum performance. HKS rocker arm stoppers and valvesprings help keep the valvetrain under control under the raised RPM limit. Ueno’s drift surgery requires an engine that can produce power reliably, so Hayashi-san replaced the stock T28 with an HKS GT-RS turbo which has been mounted on a Légerfort manifold and cools through an HKS Type-S front-mounted intercooler. Légerfort also supplied the the turbo outlet pipe, front pipe and the full titanium exhaust system. With the boost dialed to 1.4 bar (20.3 psi) the engine cranks out 450 HP, requiring alterations to the fuel system including a NISMO high-capacity fuel pump and 555cc/min injectors and an HKS hard pipe kit. The stock inlet plenum was kept, but polished to match the upgraded piping. Hayashi-san also took care of the tuning with a Sui:Vax ROM chip upgrade on the stock ECU; an HKS EVC module adjusts boost levels for steady boost control. 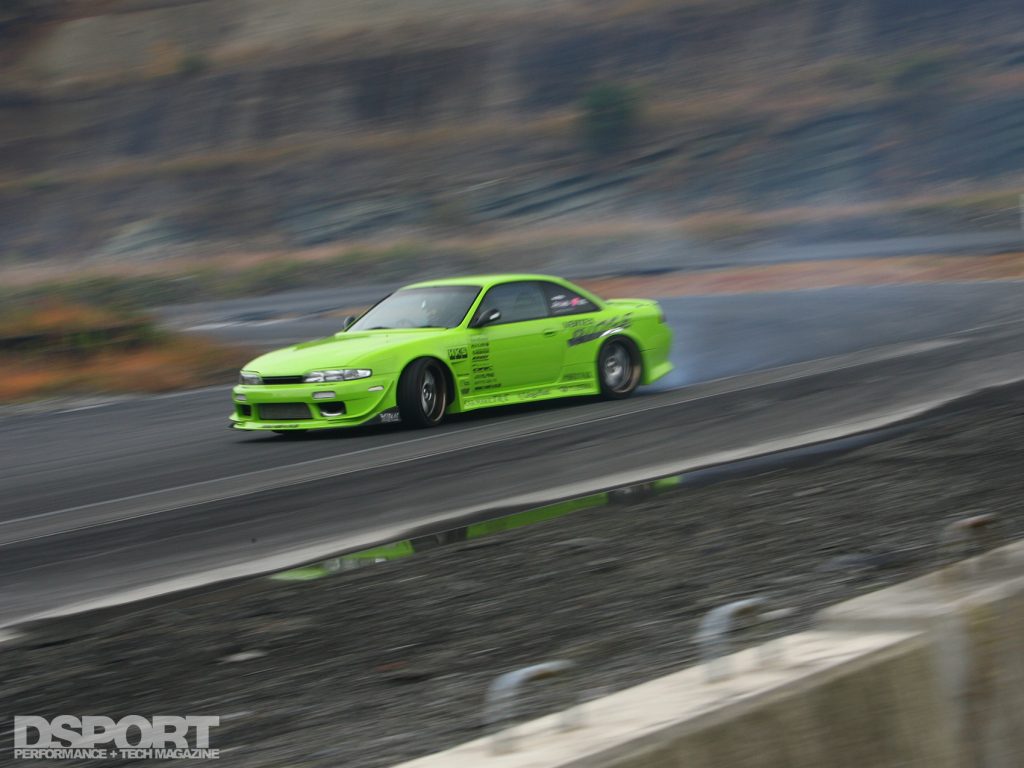 While Ueno uses the car to practice lines for D1GP Professional Competition, the S14 is also frequently entered into the D1GP Street Legal competitions. This entry-level class for the masses requires cars to be registered and retain most road-going amenities such as the driver and passenger seat, fully-working headlights and taillights, factory brakes, complete glass and a working OE gas tank. Even with these restrictions, the practice Silvia manages to produce a reliable 450 horsepower, providing an apt working template for project builders everywhere looking to create dual-purpose street and drift machines. 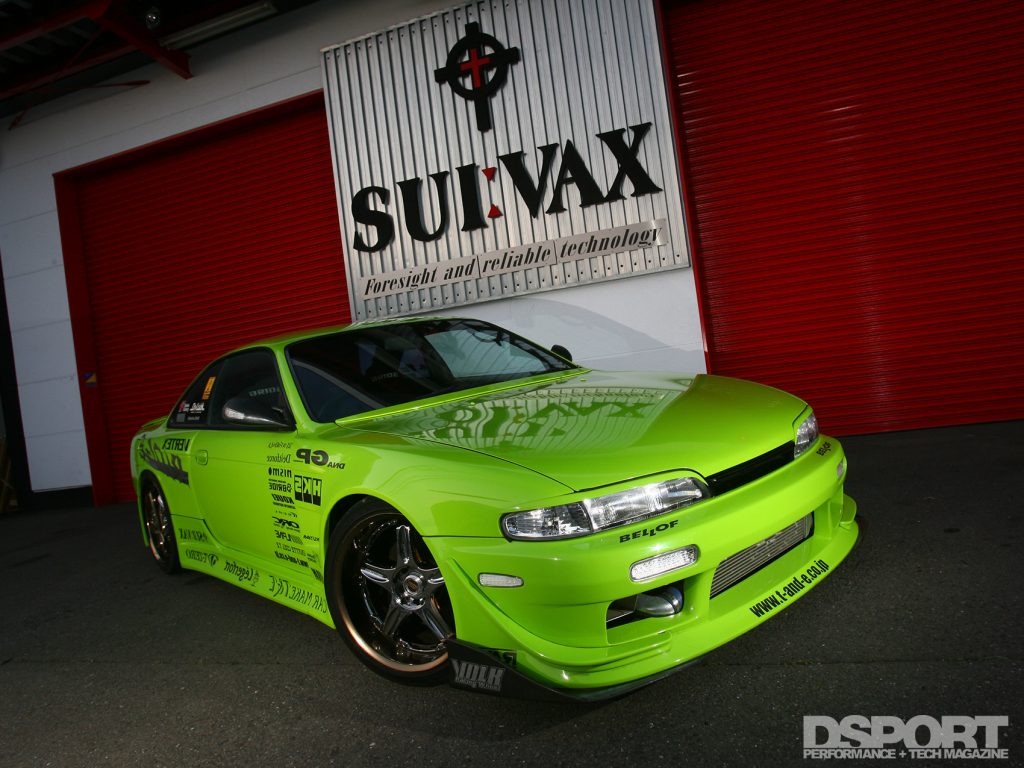 Power to the Pavement

Ueno needed a suspension that would enable him to fine tune the geometry of the S14 according to his style, the track and available grip. The required level of adjustability and damping was achieved with the installation of an Ikeya Formula suspension and HKS Hipermax Pro coilovers. An Ogura Racing Clutch single-plate clutch kit joins the ATS Deftforce LSD to help get power to the Yokohama Advan Neovas. Knowing that all good runs must come to an end, Ueno addressed the braking system’s inadequacies by installing Brembo calipers and discs from an R34 Skyline GT-R as well as T-Zero high friction brake pads. The agile Vertex S14 serves as the perfect practice machine for D1 surgery, allowing Ueno to develop new techniques and push his angles. It might not be as powerful as his custom 3-series, but as he told us during his outing at Nikko Circuit, the Vertex S14 is more balanced and forgiving. Where carving lines into complex drift courses requires the ultimate precision, this practice car may be the perfect scalpel in Ueno’s instruments. 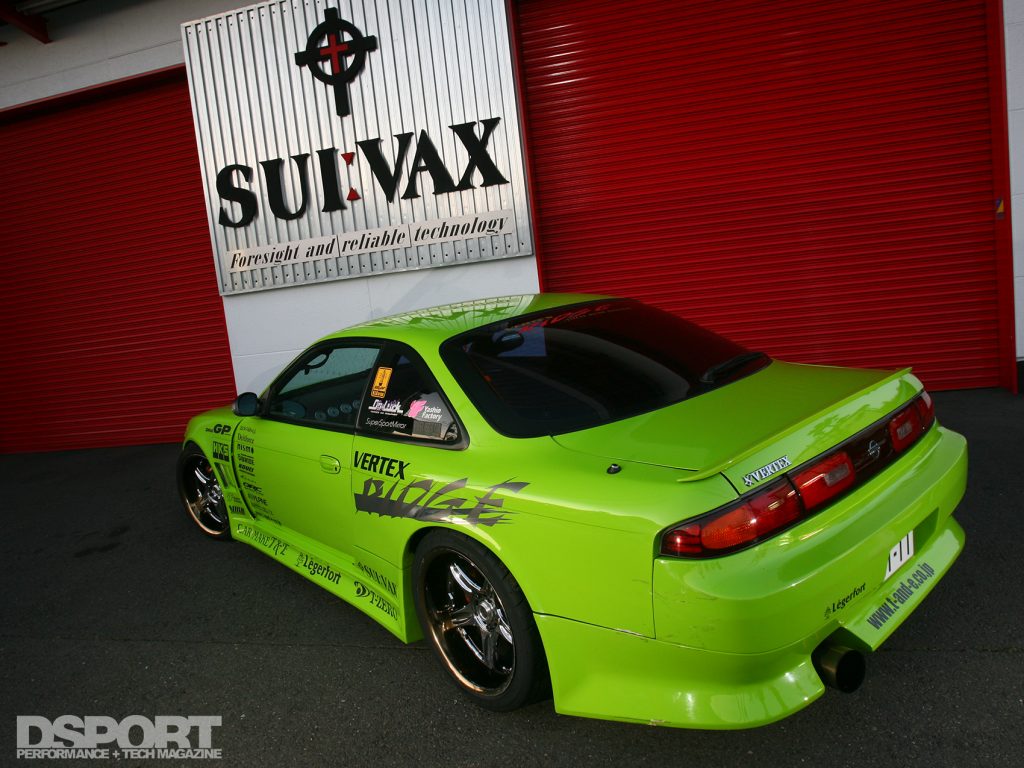 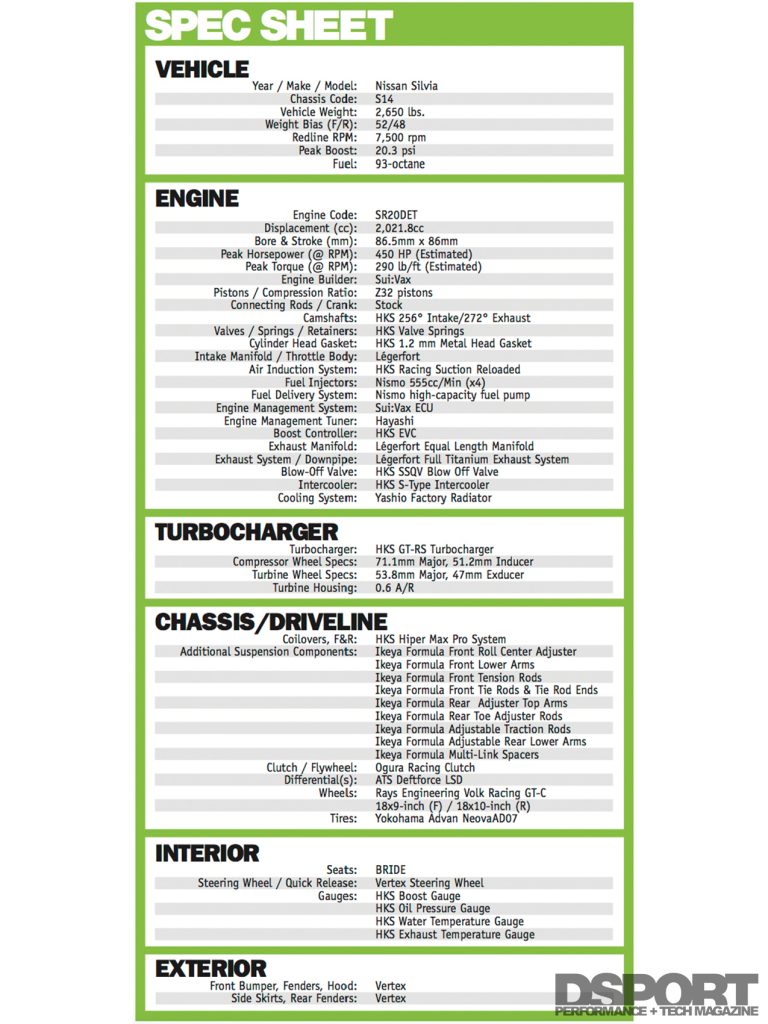