From bare shell to the baddest 2G Eclipse around in just four days; that was the goal facing Edward Deiure that he had neither planned nor prepared for. However, after having gone through what can only be called a series of unfortunate events, Deiure and his GSX were up for the challenge to get the running build to the Buschur Racing DSM/EVO Shootout in a little over 96 hours. Text and Photos by Richard Fong

Get What You Pay For

Deiure had purchased his ’98 Eclipse GSX as a graduation present to himself while his friends and family balked at the decision. Much to his dismay, an oil starvation condition caused a spun bearing that destroyed the original engine after only forty miles of his ownership. A second engine from a general repair shop was hastily installed and suffered a similar fate, spinning bearings after only two hundred miles of use. The third engine fared only slightly better, lasting over a year of driving and commuting before being brought to a local “garage guru” that promised an 11-second daily driver setup. Instead, a month’s worth of time and money resulted only in delivery of the news that said guru couldn’t start the car and complete the build. 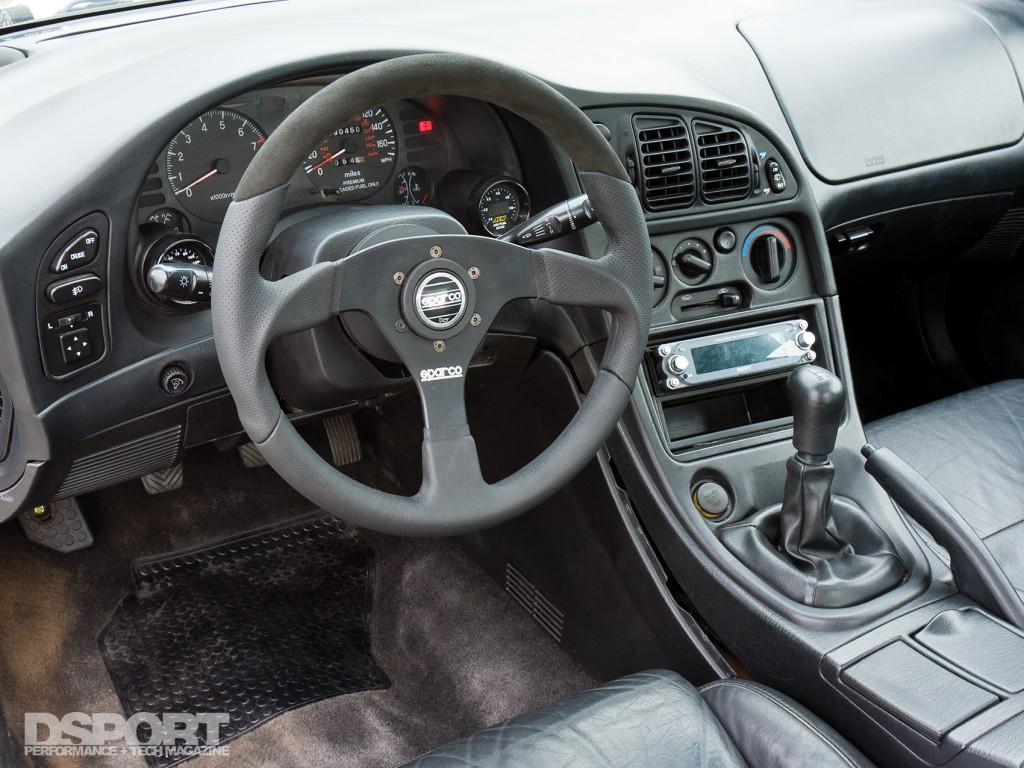 With defeated pride, Deiure towed his Eclipse to Street Tuned Motorsports where it was ultimately determined that the third engine was blown as well. Such a turn of events would leave a sour taste in anyone’s mouth but STM tuner Emery Kapral sweetened the ordeal when he offered Deiure this solution – “How would you feel about owning the baddest 2G around?” Deiure agreed and both hashed out a game plan for the build. 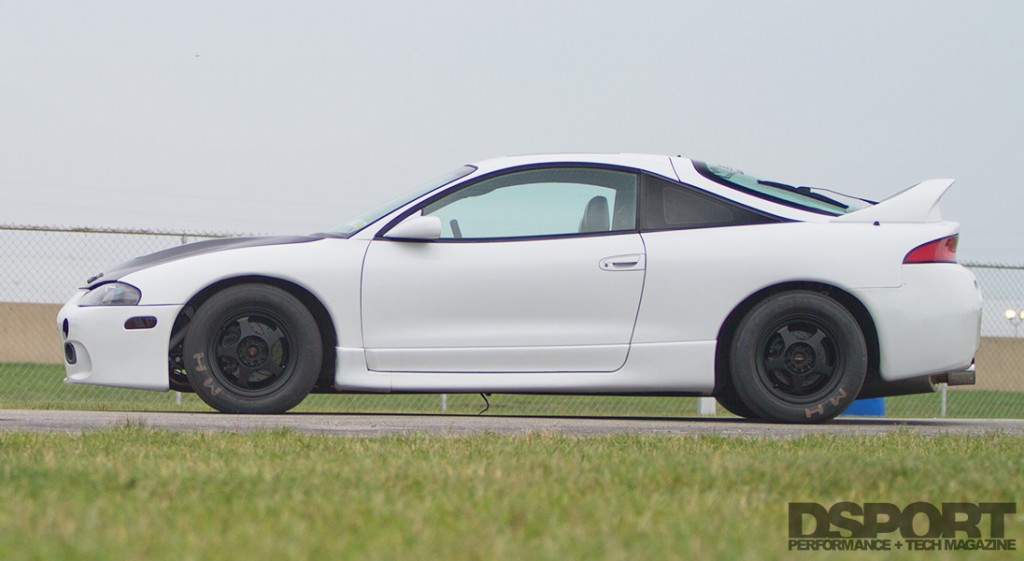 STM began with modification to the body. Known for his forward facing turbo manifolds, Kapral saw a unique opportunity to incorporate the same design into the Eclipse. The front end was completely rebuilt from the apron forward. A custom tube-frame bolted to the front of the frame rails replaced the stock sheet metal and radiator support. The new structure provided mounting for the headlights, radiator, intercooler and bumper cover, freeing up the space needed for the custom forward-facing turbo manifold.

With the front-end revisions completed, the engine bay was prepped and painted while the engine and driveline received their respective upgrades. Before the paint had dried completely, it was suddenly decided that the Buschur Racing DSM/EVO Shootout would be the perfect place to debut the car. With 96 hours and 325 miles separating the car from being at the event, STM ramped it’s efforts into overdrive. 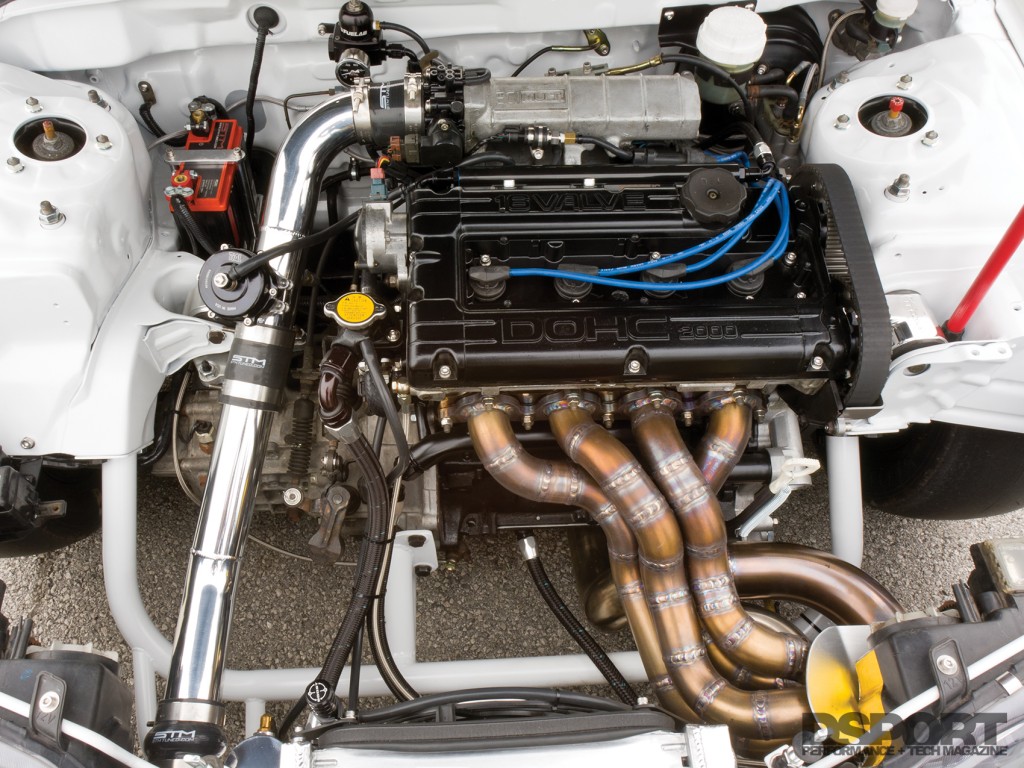 The equal-length runners of the stainless-steel manifold channel spent gasses to the PT&E 6262 turbocharger mounted just below the driver’s headlight. The inducer faces forward through a port cut in the bumper while the compressor outlet connects directly to the end tank of the STM intercooler. Once chilled, the air charge flows through custom piping to an EVO VIII throttle body and a 1G DSM intake manifold. An STM-fortified fuel system supplies E85 to a quartet of 2,150 cc/min Fuel Injector Clinic injectors that saturate the air charge as it enters the combustion chambers. 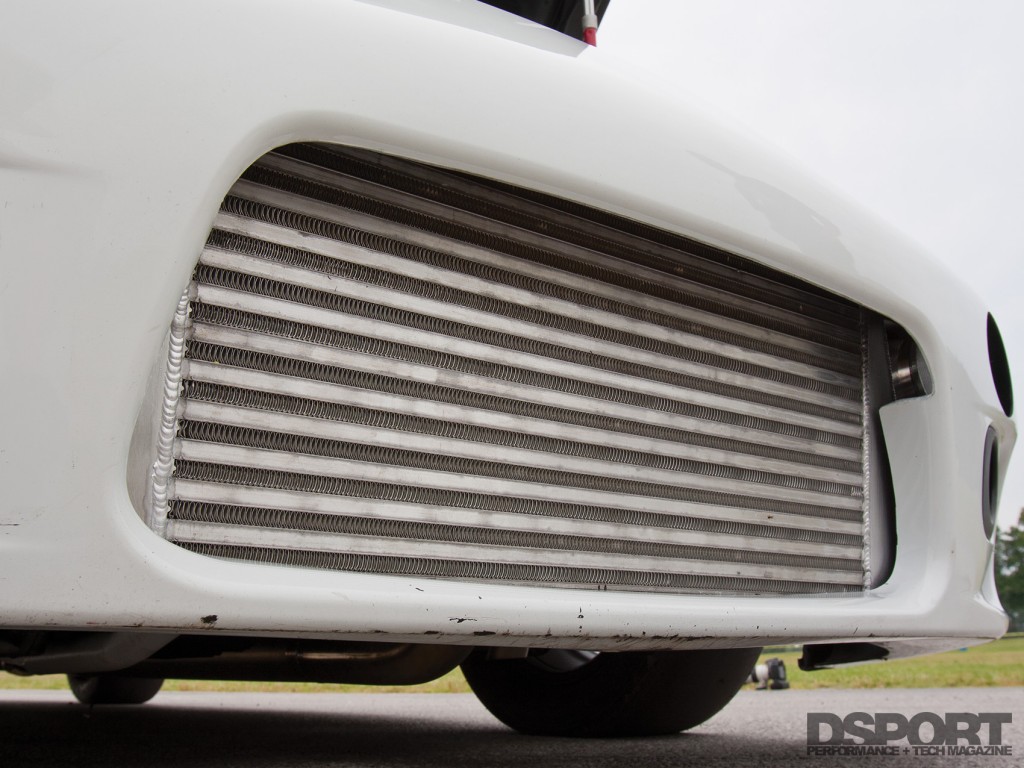 A forward facing PT&E 6262 turbocharger feeds directly into the end tank of an STM intercooler.

While the second generation DSM chassis sports a more refined appearance and improved ergonomics, it comes equipped with a 7-bolt 4G63 that suffers from crank walk when power is significantly increased. With this in mind, Deiure obtained a Buschur Racing Stage-3 shortblock as the foundation for the new powerplant. Equipped with a 6-bolt engine filled with GRP aluminum rods and JE Pistons, the stout iron block was ready for a higher-flowing cylinder head. A first-generation DSM cylinder head was equipped with a complete Supertech valvetrain, Kelford 272-degree camshafts and AEM Tru Time adjustable cam gears. Once mated to the block by way of ARP head studs, the new longblock was ready to boast about some climactic power numbers. 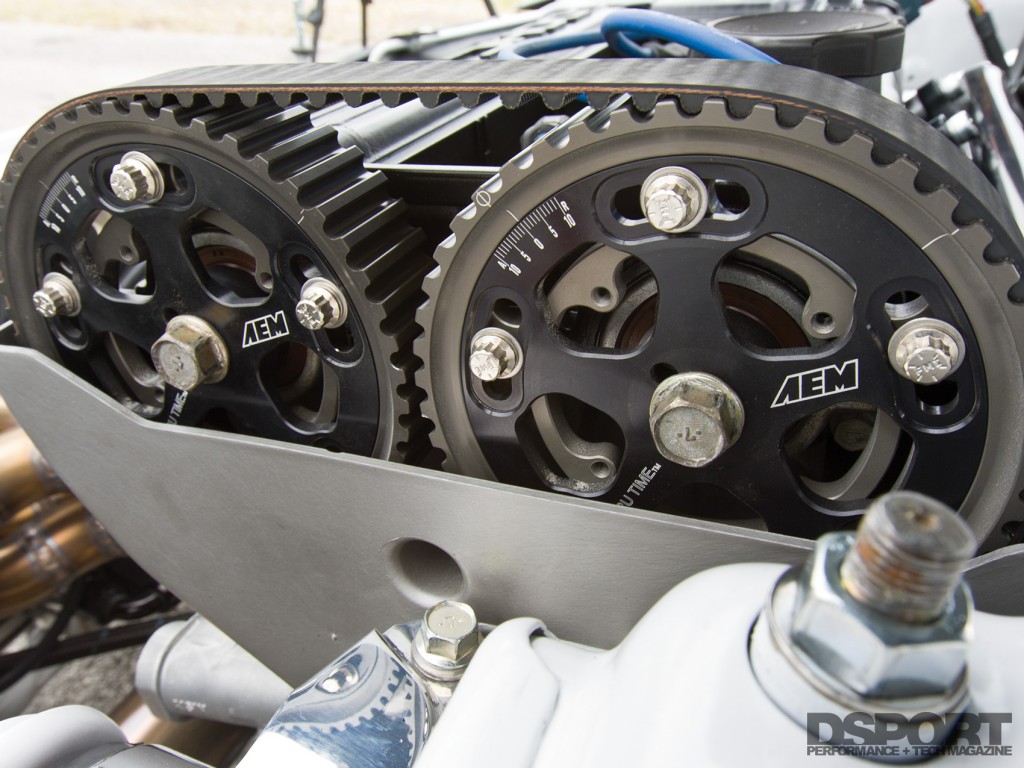 Up until half way through the 1992 model year, all DSM chassis (Eclipse, Laser and Talon) came equipped with a 6-bolt 4G63 engine (crankshaft has a 6-bolt hub to mate to the flywheel.) From the latter half of 1992 and on, all DSM chassis (including the 2G Eclipse) came factory equipped with a 4G63 engine featuring a 7-bolt crankshaft. The 6-bolt crankshaft featured wider bearing journals and subsequently bigger rods than those of the 7-bolt crank. This turned out to be a downgrade, as the reduced weight of the 7- bolt crank permitted faster revving but was prone to crank walk at horsepower levels beyond 350. Buschur Racing only uses 6-bolt engines for its BR race engine program. 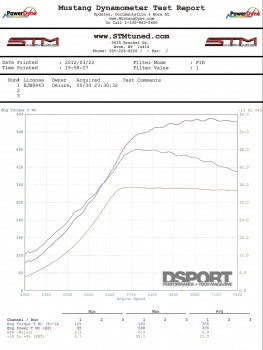 With the hardware in place, it was time to tune up the software. The stock ECU got the boot in favor of a plug-and-play AEM engine management system to regulate fuel delivery and ignition timing. With boost held steady at 35psi thanks to a Hallman Pro manual boost controller, Kapral dialed in the AEM unit. Strapped to the rollers of a Mustang AWD dynamometer, the Eclipse put down 588 horsepower and 482 lb-ft torque to the wheels. Compared to a typical second-generation baseline pull of 165 horsepower, this Eclipse GSX produced 256-percent more peak power.

On Track and On Time

Some four days after the start of the build, Deiure’s Eclipse finally made the trek out to Norwalk Raceway in Ohio for the DSM/EVO Shootout. Not content with the original goal of simply debuting the build, Deiure took the opportunity to shake down the car on the track as well. “Emery and the STM really put it into overdrive, finishing the car on time. When it fired up the night before we left, I don’t think I’ve ever had a bigger smile on my face,” Deiure remarks. “I tried to run the car on the last day of the shootout, but I wasn’t able to get a clean pass. My new goal is to run a 9- second quarter-mile with this setup.” With plans for an improved fuel system, a lighter chassis and more power to the ground, it’s only a matter of time before this 2G Eclipse reaches this next goal. Now, time is all Deiure has. 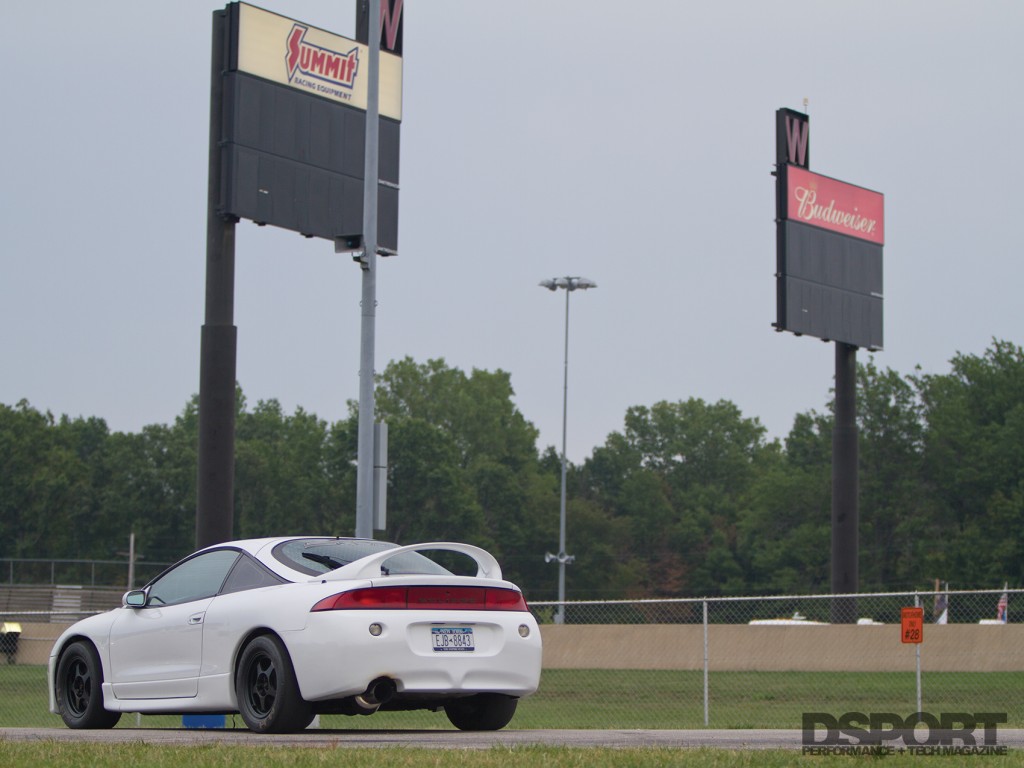